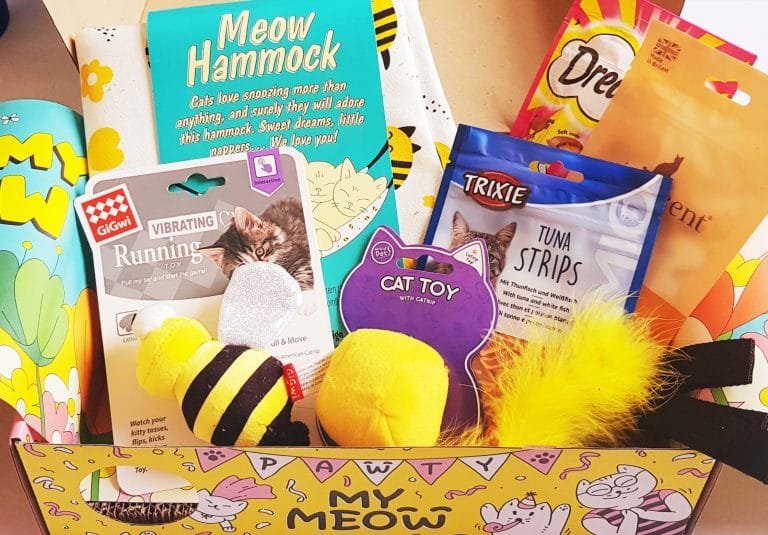 If you’ve ever seen your cat darting after insects in the garden, the Bee My Meow is a perfect theme for this month’s goodies from My Meow!

As always the box opens with adorable graphics. I do love the little cartoon characters and pictures they have in every box; it’s a small thing but it’s seriously charming.

There’s also the insert that tells you what’s inside.

My Meow has a selection of treats, toys, and accessories every month, which is a nice combination. The My Meow Magazine can now be found online, which is a bit of a shame as I enjoyed leafing through it, but you can still read all the useful information as well as fun stuff they produce every month. 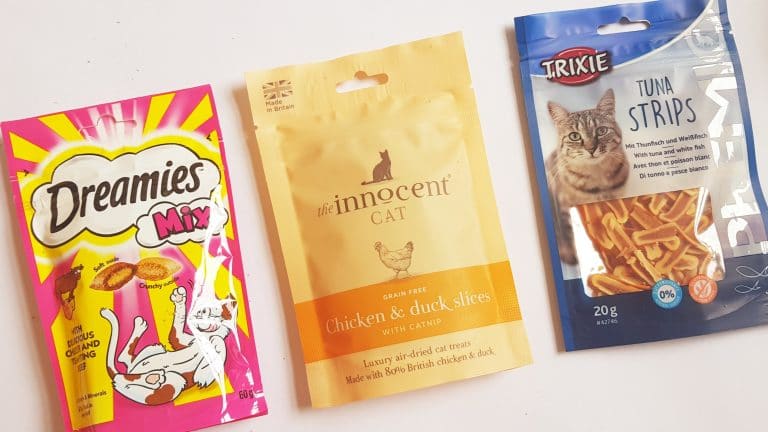 Here are this month’s kitty treats. My cat loves Dreamies, especially the cheese version so she’s been all over these! She is also very keen on Innocent Cat treats, which are a superb quality brand made with 100% natural ingredients plus also catnip for extra yum. The Trixie Tuna Strips she is less keen on, though if she’s not in a fussy mood she might deign to try a couple!

This is an accessory, which looks quite cool. It’s a Cat Hammock, and is one of the items that is specially designed for My Meow. I do think it’s a neat idea, a hammock with four straps that can be attached perhaps to chair legs. I’m actually still trying to figure out where to put it, as out chairs at home seem to be a bit low to the ground. But I think more experimentation is needed, as my kitty certainly likes to curl up in odd places! 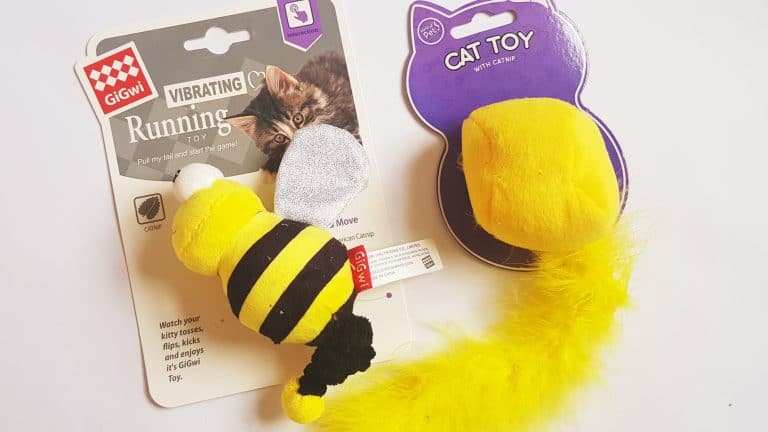 Two toys to chase and toss in the air. One is a fluffy ball with one of those feathery tails that cats seem to find impossible to resist. I think it’s because of the floaty feather, they always seem to be moving just the tiniest bit.

The other one is in the shape of a bee, and not only does it have little crinkly wings, but the sting at the bottom pulls out and then shoots back in, which makes it dance and vibrate enticingly. It’s a very clever idea, as it’s just enough movement to attract the cat before it pounces! 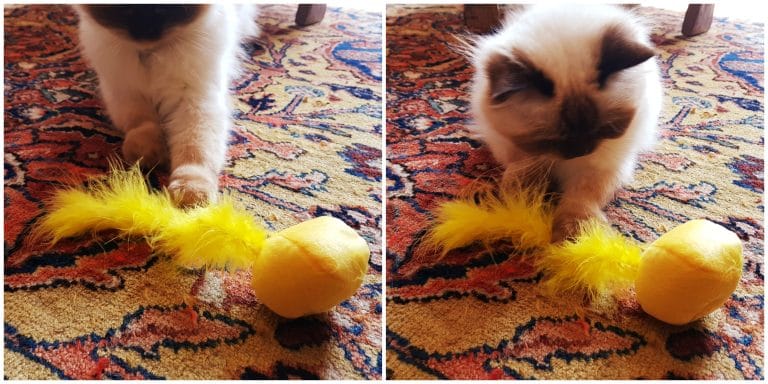 Here is mine checking out the feathery fluff!

Plus, this is the little festive den thing that was included in the Christmas My Meow. Even though it got rather squashed by kitty attempting to climb it, she still loves curling up inside, and she’s quite large so it’s very funny seeing her in there!

As always this is a very cute selection of items. I love the little toys, and the treats are always very well received in our house! I'm not quite so sure about the hammock, as it rather assumer there will be somewhere to hang it. I would have really loved something to hang on the radiator as my cat loves sitting on it but never looks very comfortable! But then I might be able to figure out a way to use it like that. But overall there's a nice selection of items, and this is a lovely way for your kitty to get some lovely goodies and treats every month.

How would you rate My Meow ?