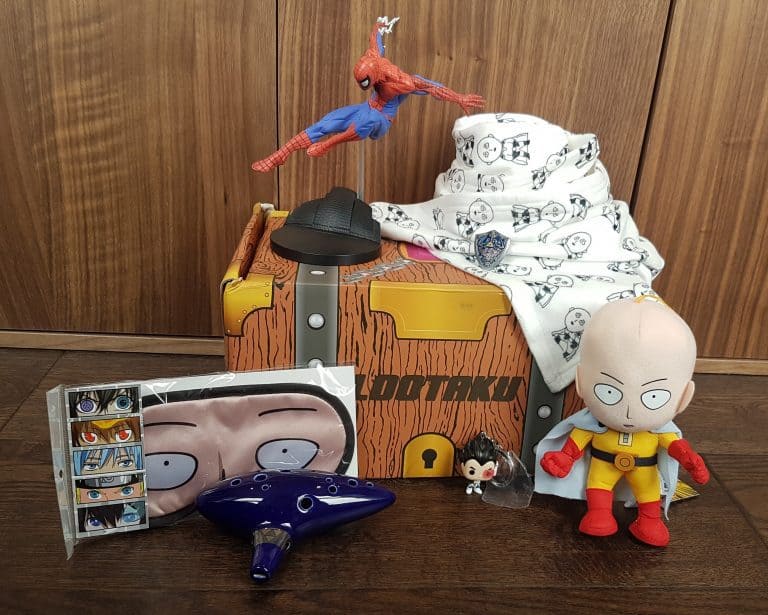 This month’s theme is ‘With Great Power’. Of course, with that theme you instantly think ‘Spider-Man’, right? And you will not be disappointed.

First off, the amazing box. It’s always the same size, and it’s incredibly sturdy; I’ve never had a single thing arrive damaged. This month, for the first time, the box was every-so-slightly scruffy, though everything inside was just fine. And it looks SO cool. 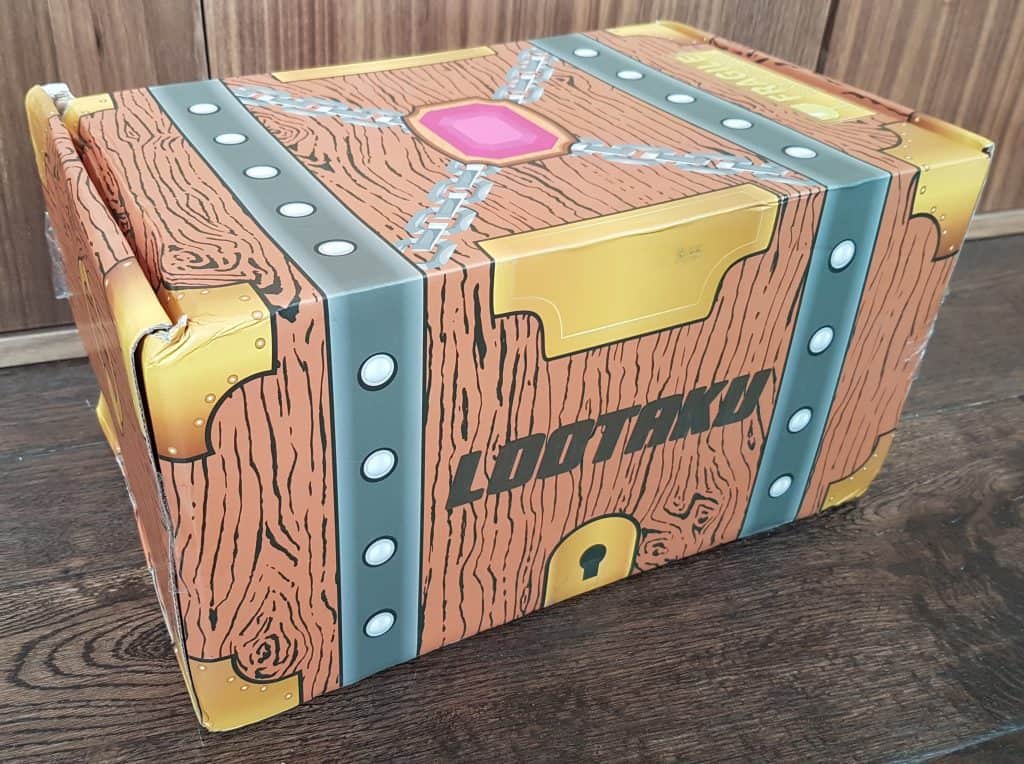 There is always a customs slip stuck on it somewhere but I never look at it because I like surprises. 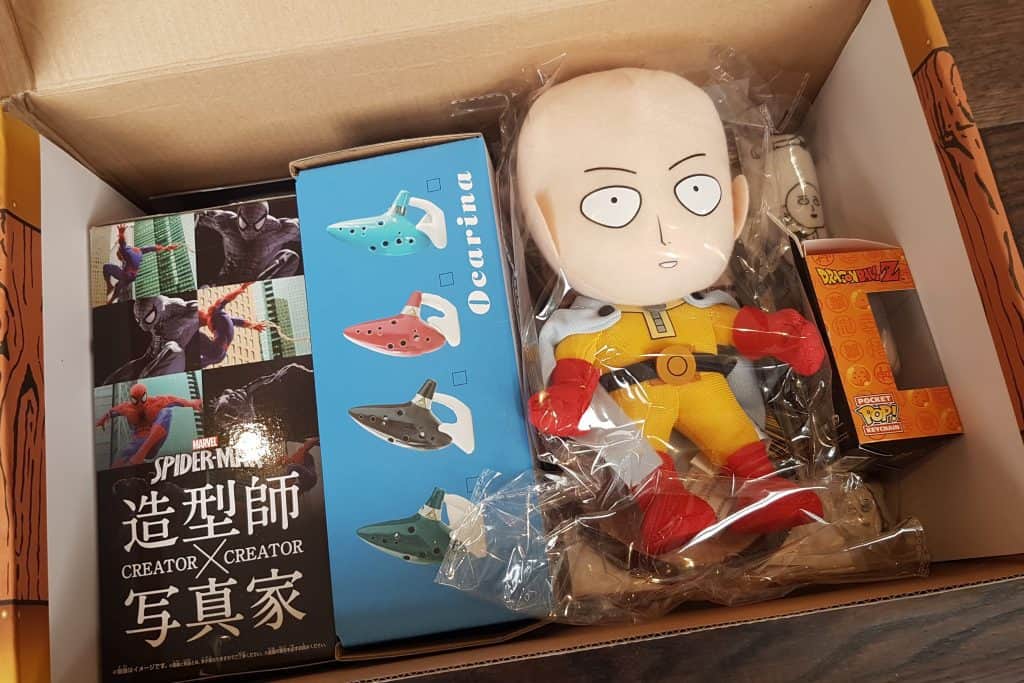 I love seeing a plushie sitting on top. And other exciting things… 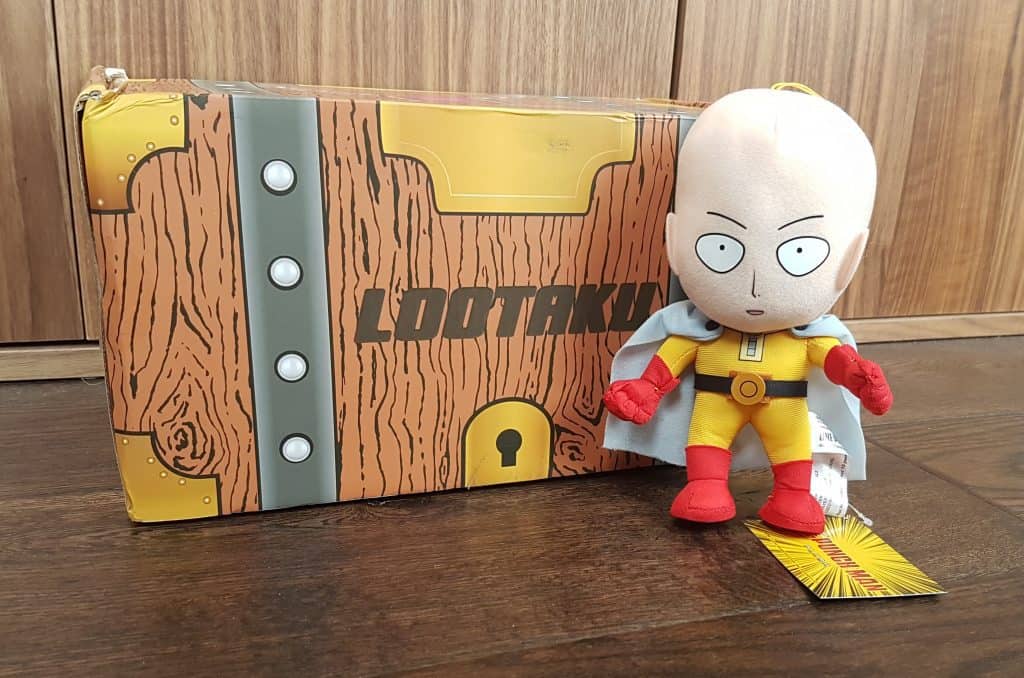 Let’s start with the plushie. I didn’t actually know who this guy was, but thanks to the detailed menu card (you’ll see it at the end) I discovered his name is One-Punch Man. He is the main character in a Japanese parody webcomic, which has now expanded into manga and anime. As you have probably guessed, this guy is seriously overpowered, as he can defeat any opponent with a single punch. He’s a cute little guy, though somewhat jaded, and in plushie form his punches are unlikely to do any serious damage. 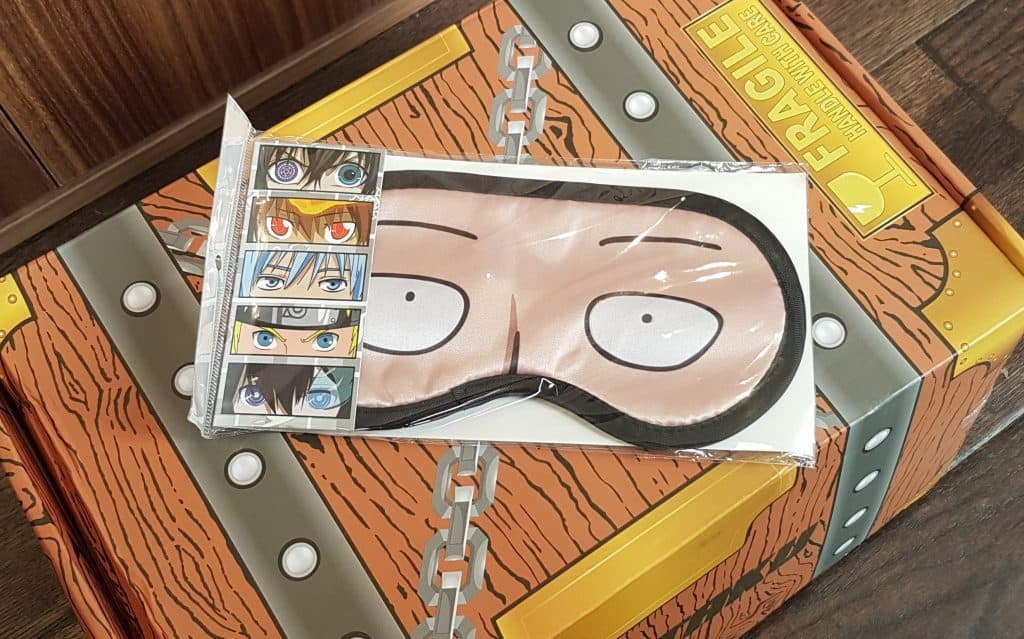 This is the craziest eye mask I’ve ever seen. The eyes belong to One-Punch Man. It’s actually remarkably comfortable, as it’s made from a lovely soft silky material, and the band is not too tight. And as an extra bonus you can seriously freak out the person next to whom you are sleeping. 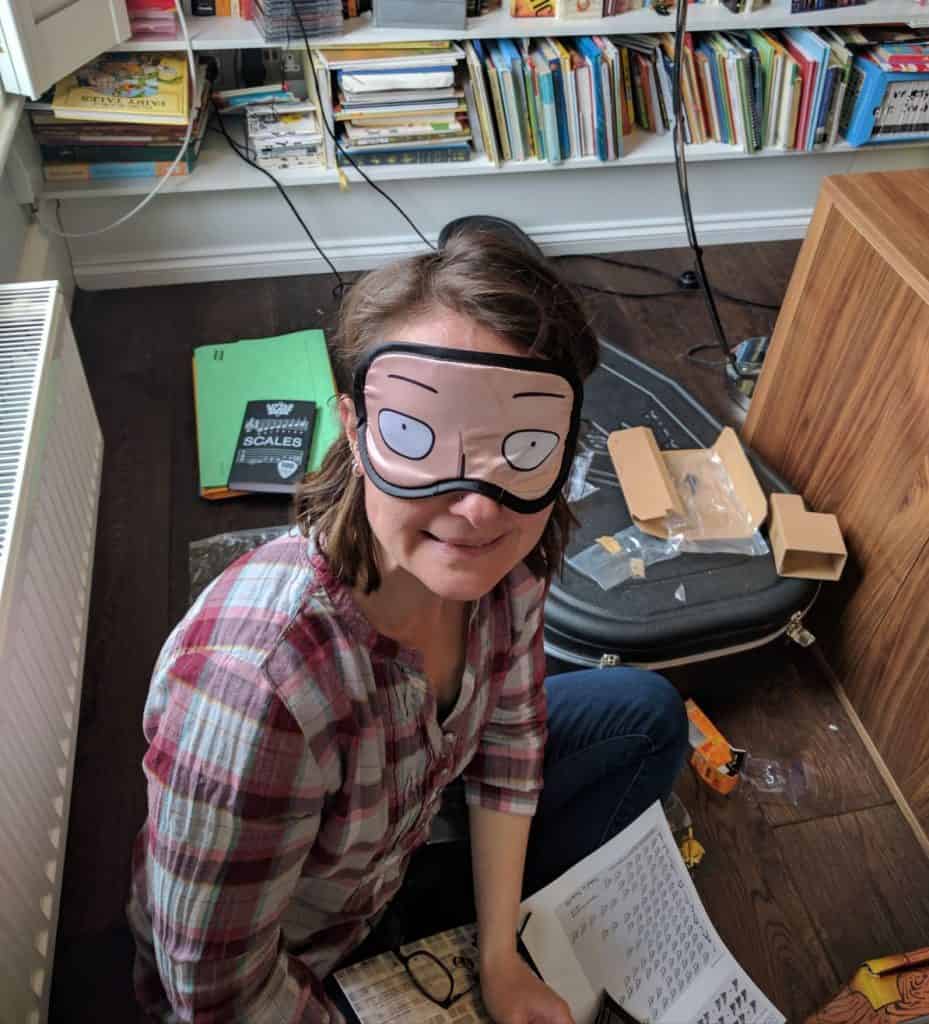 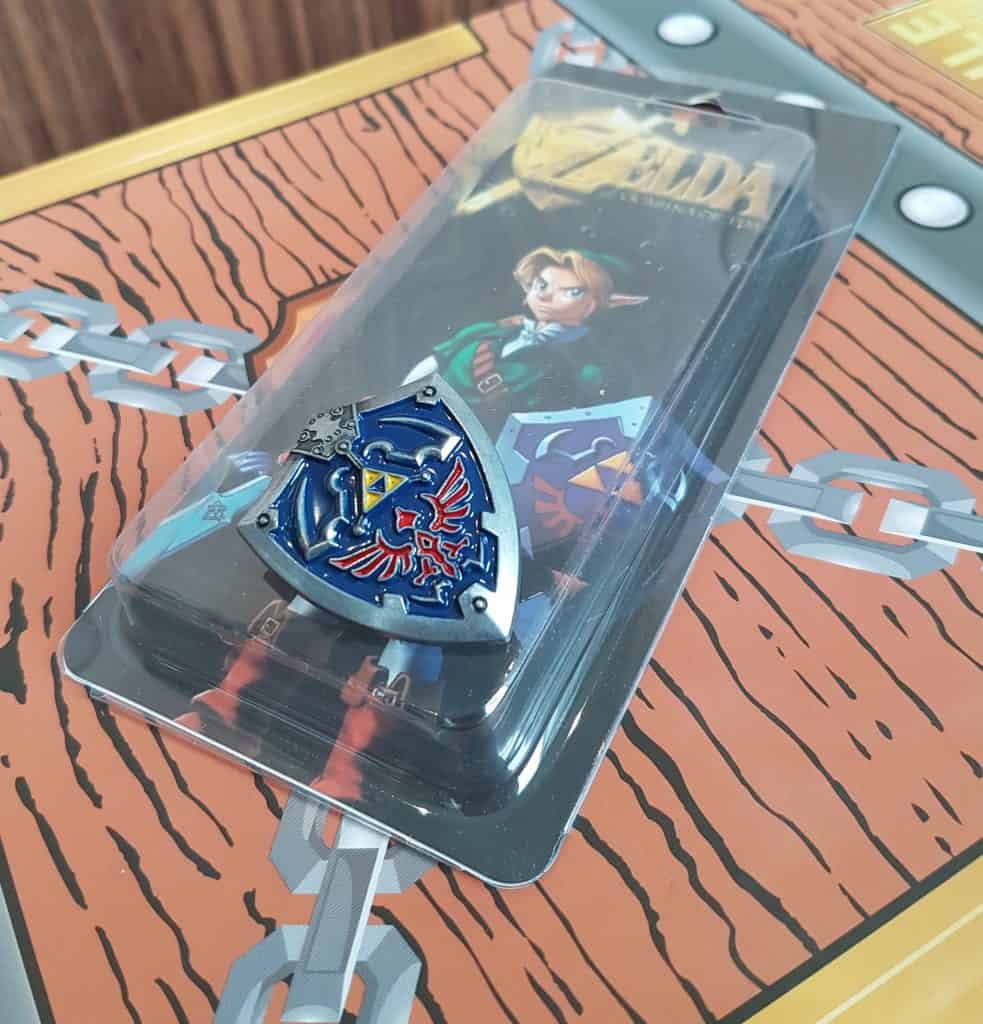 Another small but cool item. This is a pinbadge of Link’s Shield which has appeared is almost every iteration of Legend of Zelda. This particular version is from the Ocarina of Time. 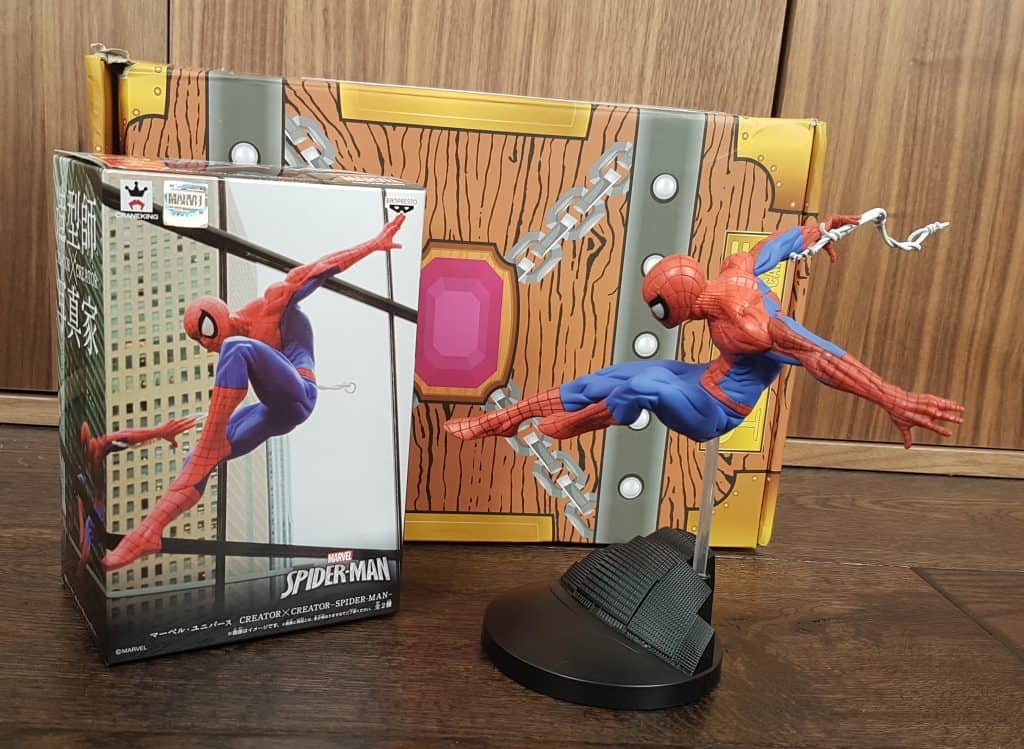 Spidey time! This superb figurine is an Asian exclusive, made by Banpresto (their first licensed Marvel release), and this particular version is a limited first edition colour release. This is a gorgeous gravity-defying figure with fantastic lines and the impressive web detail.

By the way, did you know that the famous quote ‘With great power, comes great responsibility’ is not accurate? And it was not actually spoken by Uncle Ben? 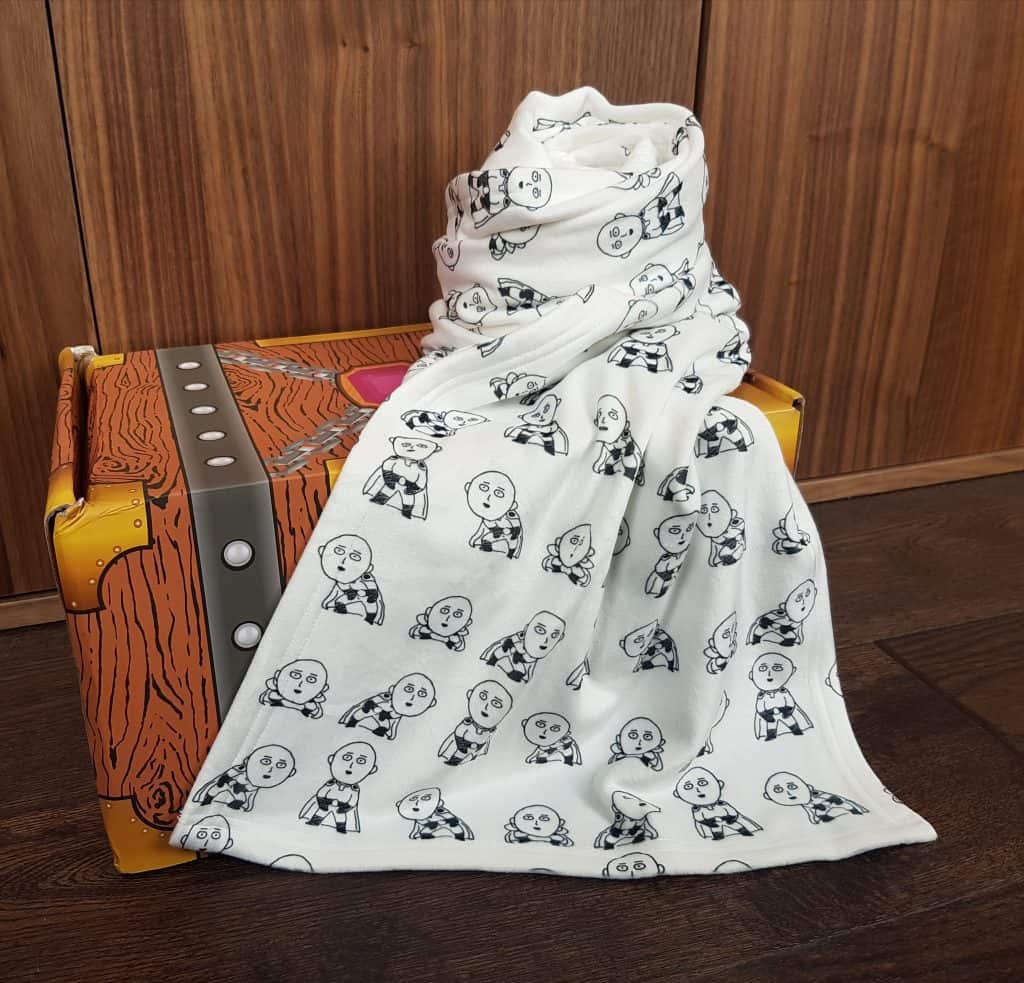 A wearable! It’s very unusual for Lootaku to include wearables, so I’m very excited by this. I bet you can see this is One-Punch Man again. It’s made from very snuggly fleece, and while I would usually think that a scarf wouldn’t be appropriate as it’s nearly May, the weather’s just taken a turn for the worse (there was ice on my car windshield this morning!) so it’s perfect timing. This is really fun and unusual, and a great talking point. 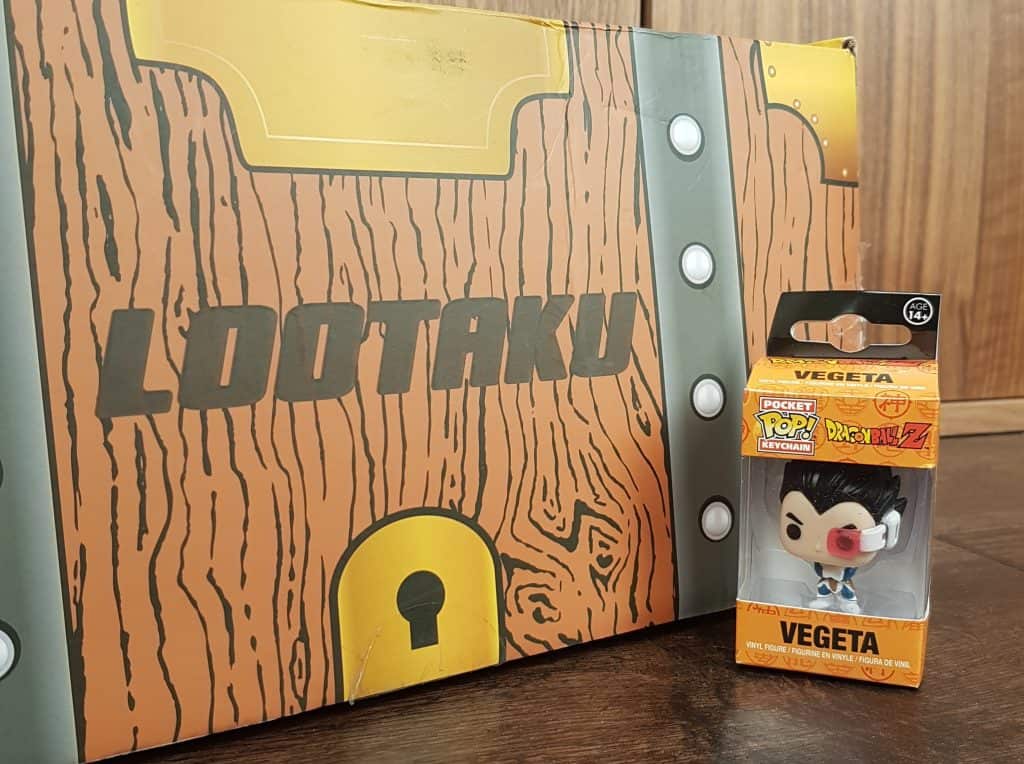 Lootaku loves Dragon Ball Z, and they’ve snuck a little keychain in here as a bonus. As you can see it’s a mini POP! figure of Vegeta. Gotta have this guy in a power-themed box, it’s over 9000!

Now, I’ve saved the best for last because this item is by far the most awesome thing I’ve ever seen in a subscription box ever. Really. Even better than anything in the Harry Potter box. Even better than my beloved Iron Man plushie. It is…

What’s that you say? Is it a ray gun? 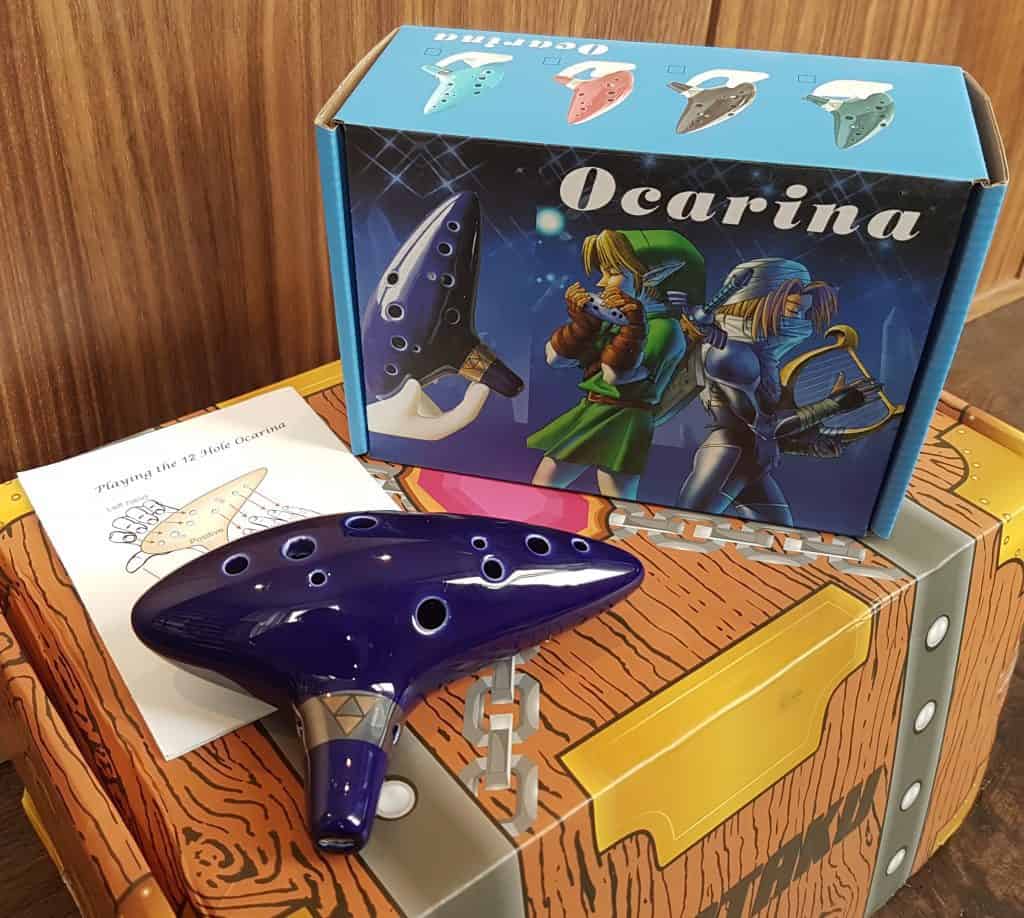 Seriously, this is an honest-to-god, ceramic, working ocarina. Now, on the offchance you don’t know what an ocarina is, it is a musical instrument. If you want to know more about ocarinas, click here. Seriously, when you’re done reading this review, check it out. It’s really interesting.

Anyway, on to this amazing item. It totally works (I tried it) and it also comes with sheet music. With the music comes diagrams to show you where to put your fingers. This is just as well, because while I can read music (to be expected as I’m a musician) I have no idea how the dots correspond to the holes. But I read the pictures and produced a tune! So proud. The tuning isn’t perfect but that’s hardy surprising and not much of a big deal, unless you’re a serious ocarina player. Inside the box is a leaflet with a few traditional tunes such as Happy Birthday. But because Lootaku is supercool they also included a sheet of diagrammed tunes of Zelda songs. So you can play along. 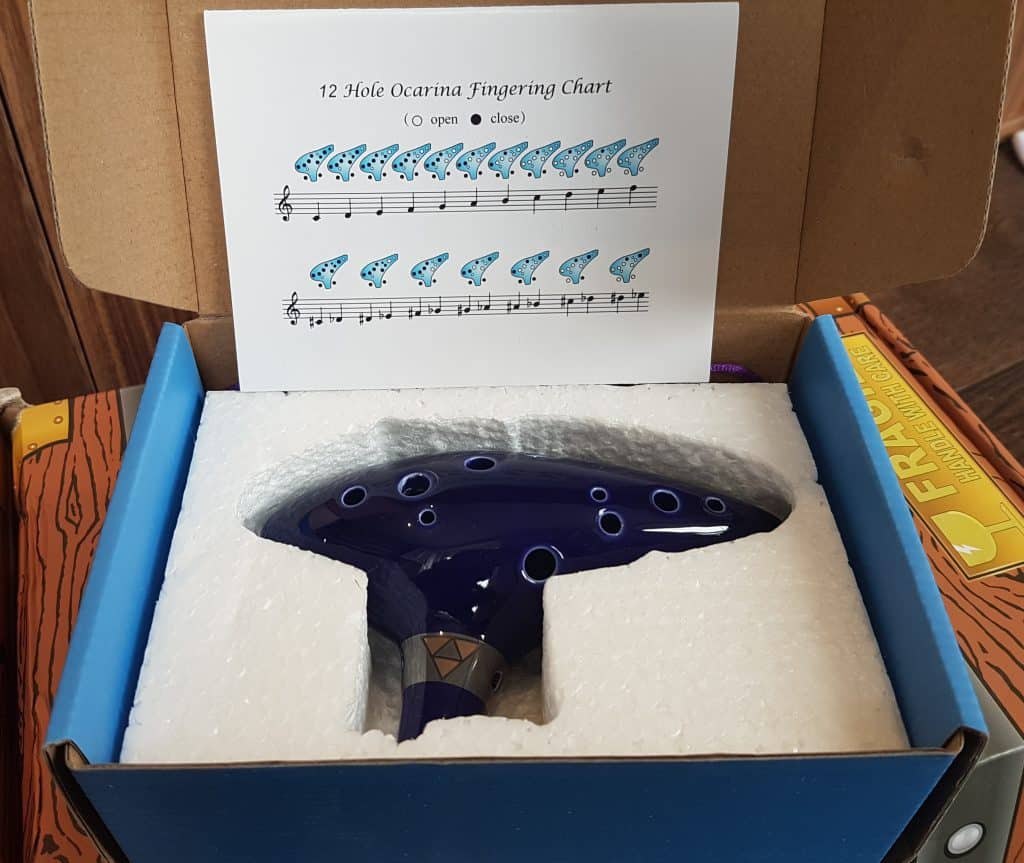 See the music insert? Not only does it work but it’s really beautiful too.

And finally, the menu. 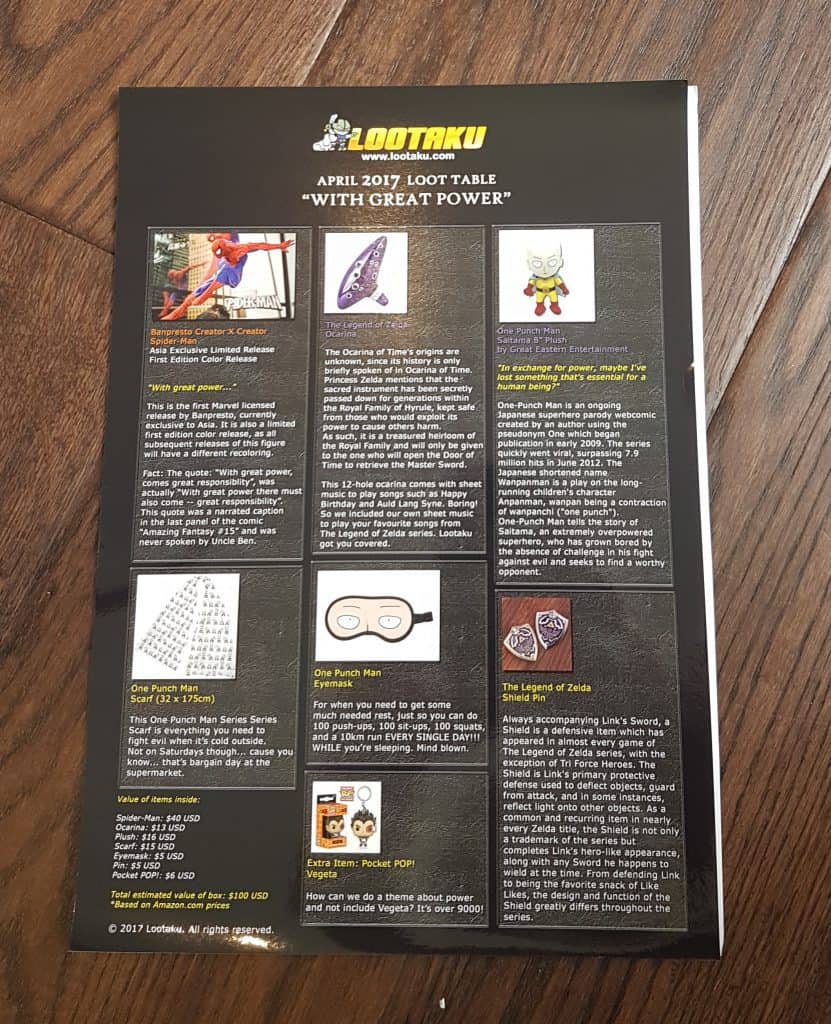 The menu card is always impressive. As I always point out, it’s always at the bottom of the box so no spoilers! It contains a good amount of detail about each item, as well as their values. I never take the values as gospel, simply because this is a box from Hong Kong and often their items are  Asia-exclusive or at least extremely difficult to find in the UK. Also I find you can never reply on RRP for anything. That being said, I’ve not yet valued the contents of one of their boxes at less, or even equal to, the price of their subscription.

I’ll start straight in, as I always do, at the contents value as I can discover. I use an online currency converter so they’re correct at time of writing. I can’t always take into account shipping costs of individual items, but I do my best to be fair. Often I can find things on Amazon, but some of the items in Lootaku boxes are nigh on impossible to source in the UK, so sometimes I have to guesstimate. I also don’t use eBay as reference, as I find prices are not reliable or realistic.

Prices and values on the Lootaku website are given US dollars. A one month subscription is $44.99 (three and six month subscriptions are cheaper). According to my currency converter this is £34.94. Shipping is $17.66 (£13.71). Slightly pricey, but this is really is a premium box, there’s never any promotional freebie filler crap. Also it’s coming a long way.

I can find no trace of this on any UK site, which means it would need to be shipped from overseas, and who knows how much that would cost. Therefore I’m taking the Lootaku value of this (always in USD).

The only place I could find these two items was a wholesaler out of China. Please note that the values above do not take into account shipping, taxes, and customs charges.

This guy wasn’t on Amazon UK, but the price above is ordering from Amazon US including shipping & tax. Other plushies from Great Eastern Entertainment on Amazon UK cost well over £20.

Lootaku has produced another awesome box. Even though it’s not cheap, the contents are always of excellent quality. This box is one of the best I’ve seen, not least because of the huge variety of items. Lootaku is often quite figurine-heavy, though that’s by no means a bad thing. This box only has one (plus the keychain) but it’s a doozy. And the rest of the items are a magnificently eclectic mix. Pin badges are always good to have, and the eyemask is fun/creepy, and practical. The scarf is inspired, and also warm. Who doesn’t love a plushie? And as for that ocarina, wow.  It seems like they’re being slightly more daring with their items, not that every box is a mixed as this one, but I do love having geeky yet practical things once in a while. And as I’ve said repeatedly, there is never any crappy promotional filler freebie stuff in Lootaku boxes. Even the cheaper items have punch (see what I did there?). This really is a premium box, and the included figures are always top-notch. I also like having some non-anime/manga items. I know this is a box from Hong Kong, and they specialize (superbly) in Asian items. But I do like it when they drop in the comic book stuff too (or Harry Potter, or Game of Thrones, whatever) because my geekdom is wide-ranging. This box also contained seven items, which is brilliant. They could have dropped a couple of the small items out and still come out way on top value-wise.

This is another total triumph for Lootaku. I can’t wait to see what they come up with next, because this is definitely one of their boxes which is hard to top!