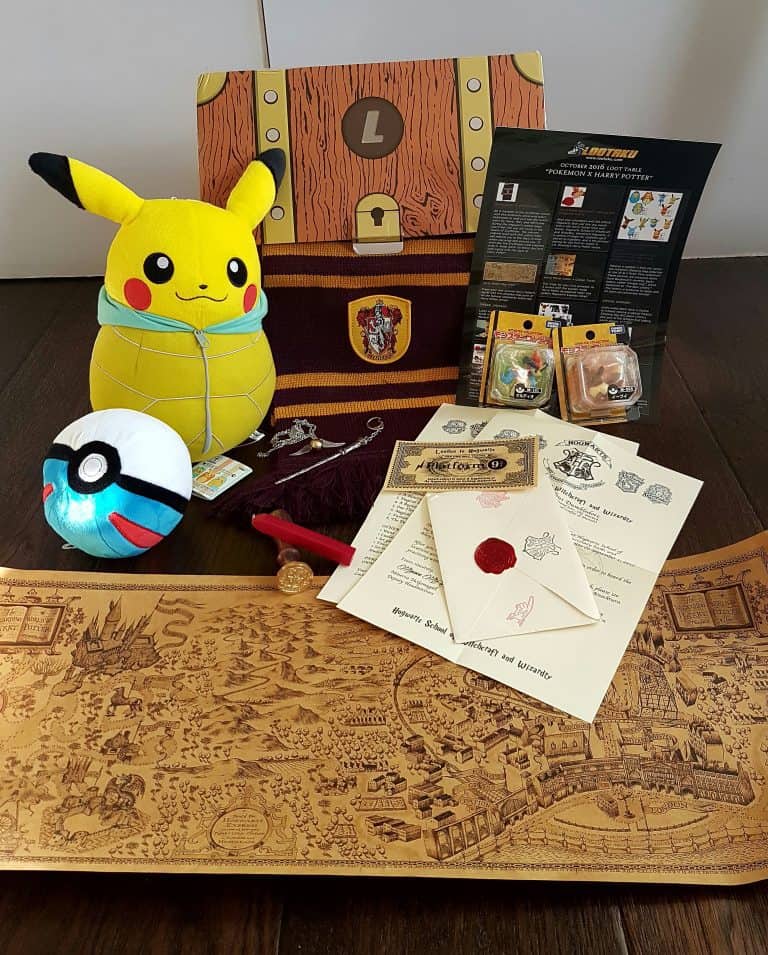 So the mailman delivered this new Lootaku box this morning, and I’ve decided to get right on the review to avoid last month’s snafu.

This is the October box, which was delivered a little late, apparently because there were some delays with suppliers. It’s quite common for October boxes to have some kind of Hallowe’en related theme; Lootaku comes from Hong Kong, so I don’t know how into Hallowe’en they are there. This month’s theme is Pokemon X Harry Potter. Harry Potter, with its wizardy theme, counts as appropriately festive, and I guess they threw Pokemon in there for the gamers. Though frankly, the Harry Potter stuff in this month’s box is so awesome it would have been fine on its own! Admittedly it might have looked a little thin, but what the hell, this is a great box. By the way, I usually don’t know what the theme is before I open the box, but this time I had to look at their website for the previous review and caught sight of this month’s theme. In a way I wish I hadn’t, because I LOVE being surprised, but never mind, it’s hardly a big deal. 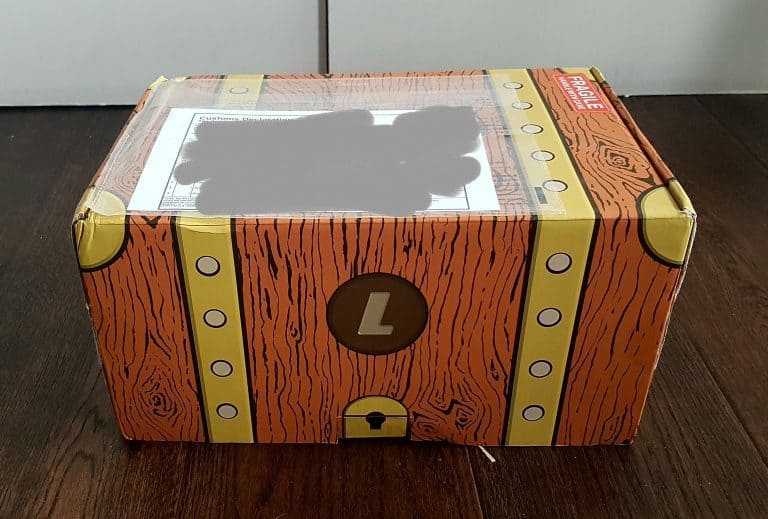 Here is the box. It’s cool. It always looks the same, same size and design, but I love it. It’s also nice and sturdy, which is a bonus considering how far it has travelled! I have never yet had anything arrive damaged. 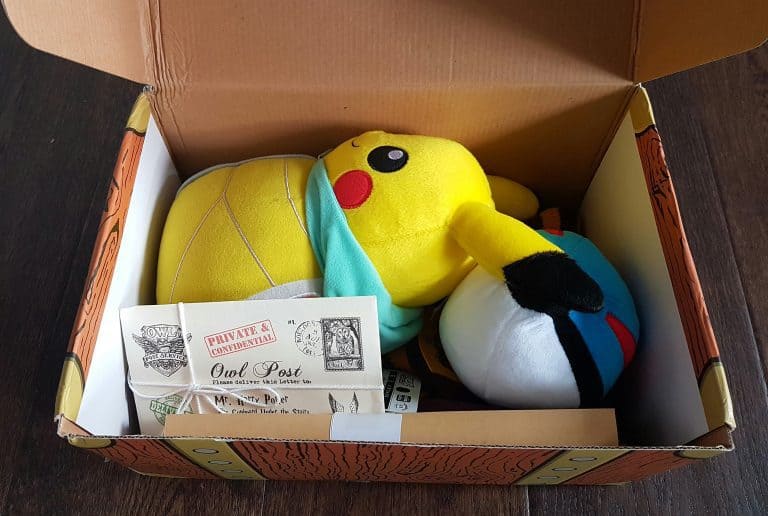 What have we here? Plush-tastic! And what looks like a very interesting letter… But first of all, the squeezy things. 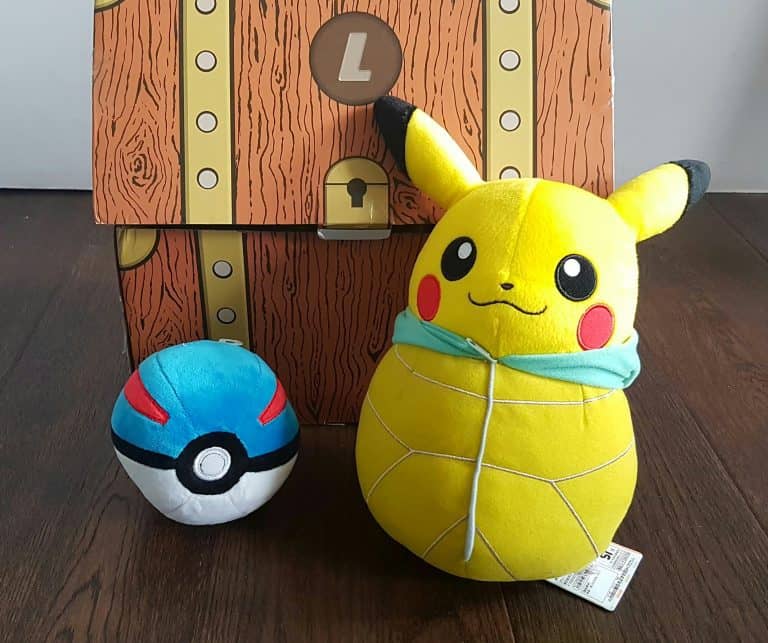 It’s a Pokeball plush and a (massive) Pikachu aleeping bag plush. On the menu (see below) the big plush is an upgrade in randomly selected boxes. Apparently this series is an item from Banpresto, which is exclusive to the Japanese market. They will be appearing in those grabber crane machines you see in arcades, but only in Japan.  The regular (unupgraded) item is also a Banpresto exclusive plush from the Sleeping Bag or Relax Time collections, just smaller. But this guy is pretty big. And squishy. I was kind of hoping the zipper was a working thing, and I could actually take him out of his bag, but no, it’s decorative. But he looks nice and friendly.  And his has a hood that you can (just about) squeeze over his head. The plush Pokeball (Great Ball, you get one of a possible six) is also cute. 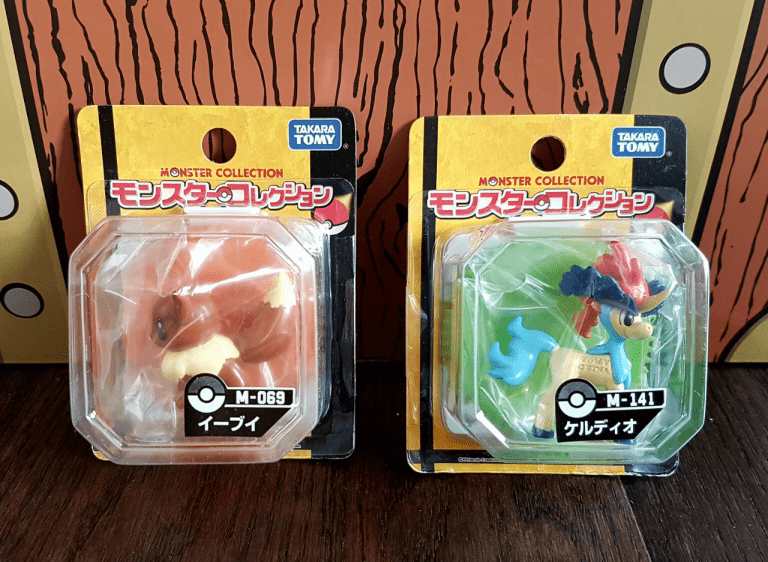 Next up, the other Pokemon-related items. These are two of the Takara Tomy Pokemon Monster collection; you get two randomly selected from a possible eleven; these are Eevee and Keldeo. I’m not really up on the Pokemon characters, but they’re little and cute, and would be a good addition to a collection of Pokemon things.

Now, onto the the stuff I’m really interested in. 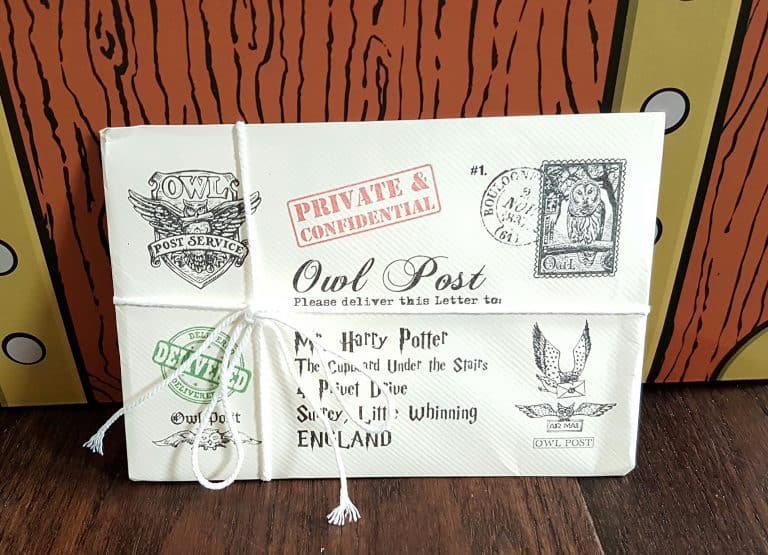 You saw this in the initial box opening picture. I bet I know what it is… 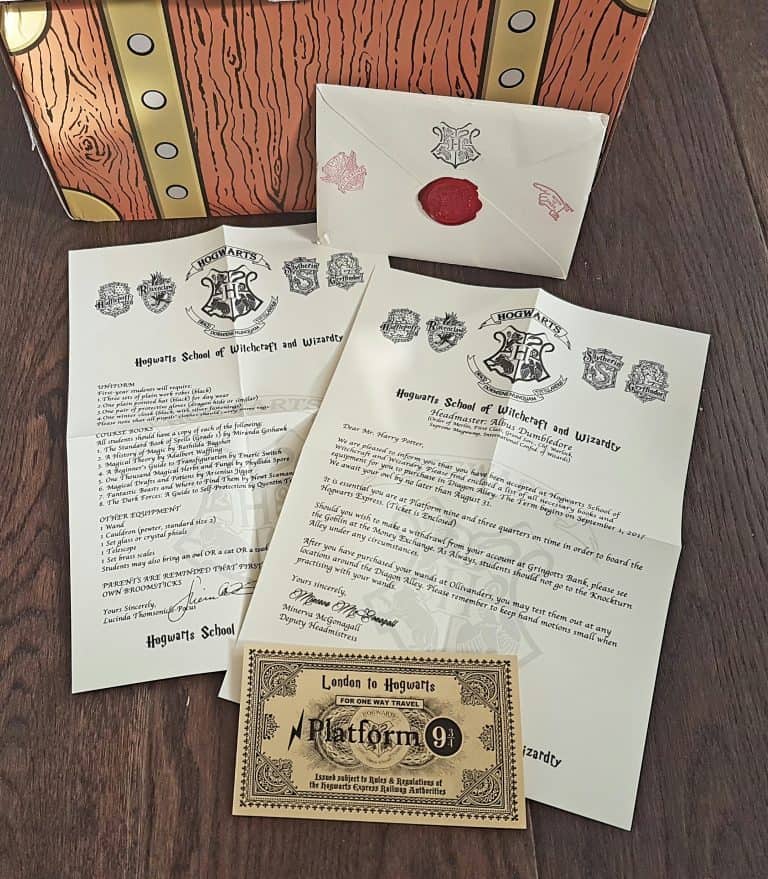 Yep, it’s a really nice reproduction of the famous Hogwarts acceptance letter, including a Hogwarts Express ticket and uniform/equipment list. As you can see, the back of the envelope is sealed with a proper wax seal of the Hogwarts crest. I really didn’t want to open this because it looked so beautiful, but needs must and all that. But I didn’t break the seal, just (very carefully) slit the top of the envelope to keep it all intact.

This is a really lovely item. The paper is thick and good quality, the seal and stamps on the back have obviously been done by hand, and clearly a lot of thought and effort has gone into this. Bravo. 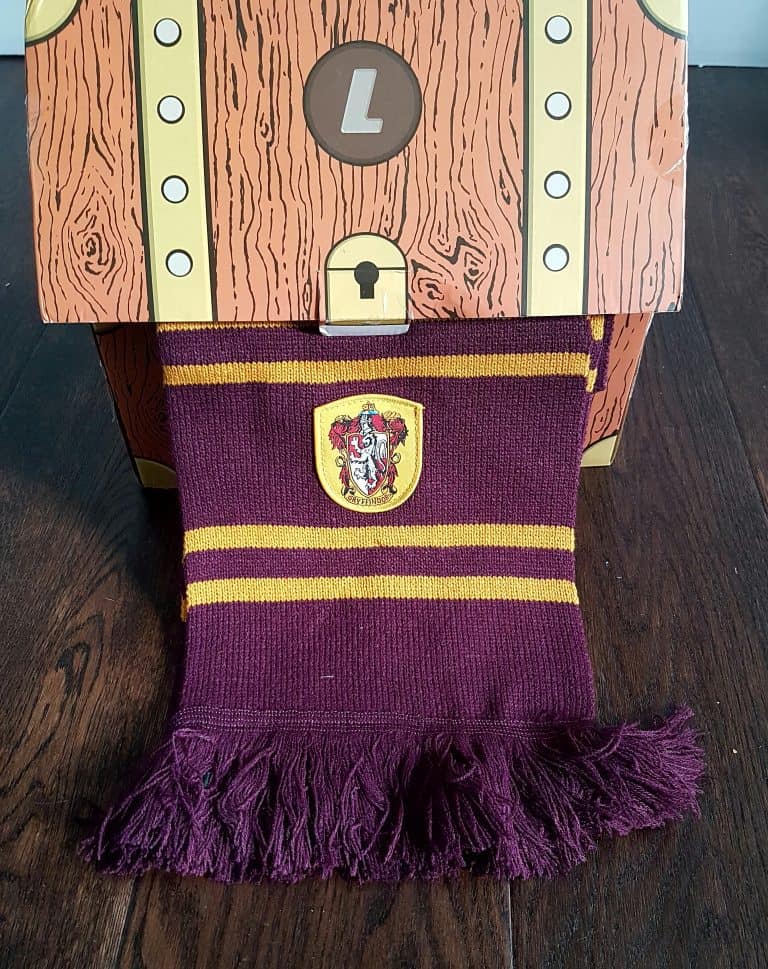 Just in time for winter, a Gryffindor scarf. Because let’s face it, everyone wants to be in Gryffindor. This is good quality, and nice and long, includes the house badge, and you could use it for cosplay or just to keep warm! 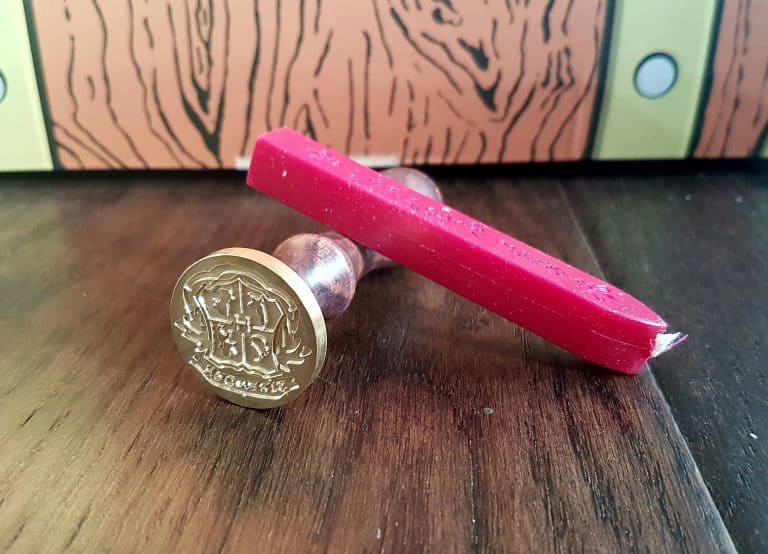 Speaking of the sealed letter, here is a Hogwarts seal, complete with sealing wax. I’m pretty sure it’s the exact same one that was used to seal the letter included with the box. This will really add a special touch to your Christmas cards!

This is amazing. It’s a beautifully detailed map of the entire Harry Potter wizarding world. Even if you’re not a total Harry Potter geek this is a piece of art in its own right and would look wonderful framed. The quality really is superb.

[There was another possible upgrade to this item: a Marauder’s Map. I must confess I would have preferred it to the giant plush, but never mind, either is a lovely bonus.]

These two last items were included as compensation for the late shipping of the box, which I really think is most generous because they’re both lovely little items. 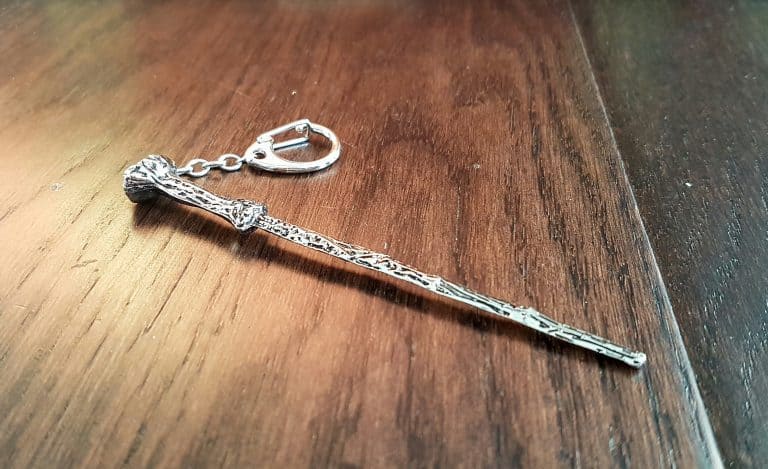 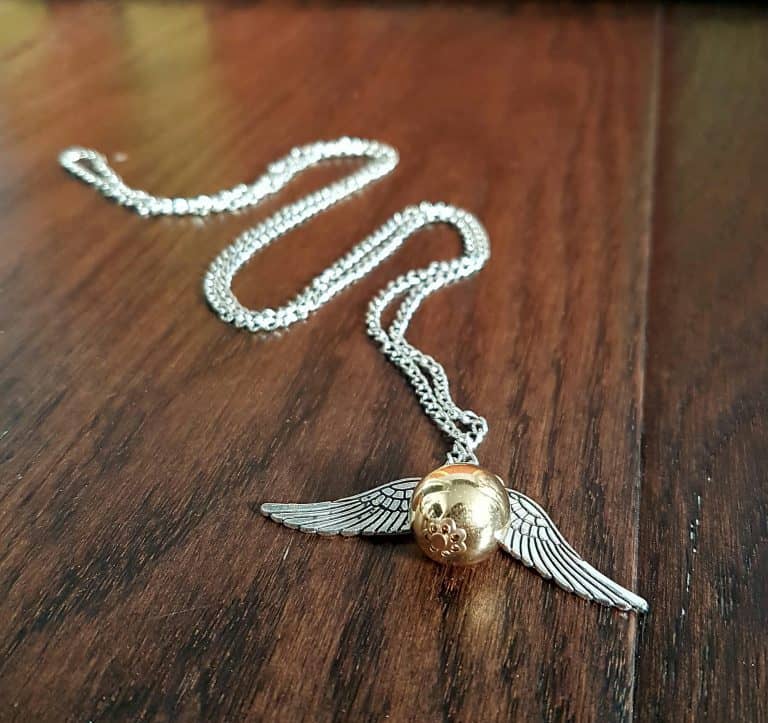 There is a wand keychain, small but with lovely detailing. It would also make a remarkably efficient self-defense item if you got lost and ended up in Knockturn Alley. Though realistically, a real wand would probably be more use under those circumstances.

Also a Golden Snitch pendant, which is small but very nicely made, with a long chain. It would go very nicely with almost any outfit; a subtle nod to HP fandom! 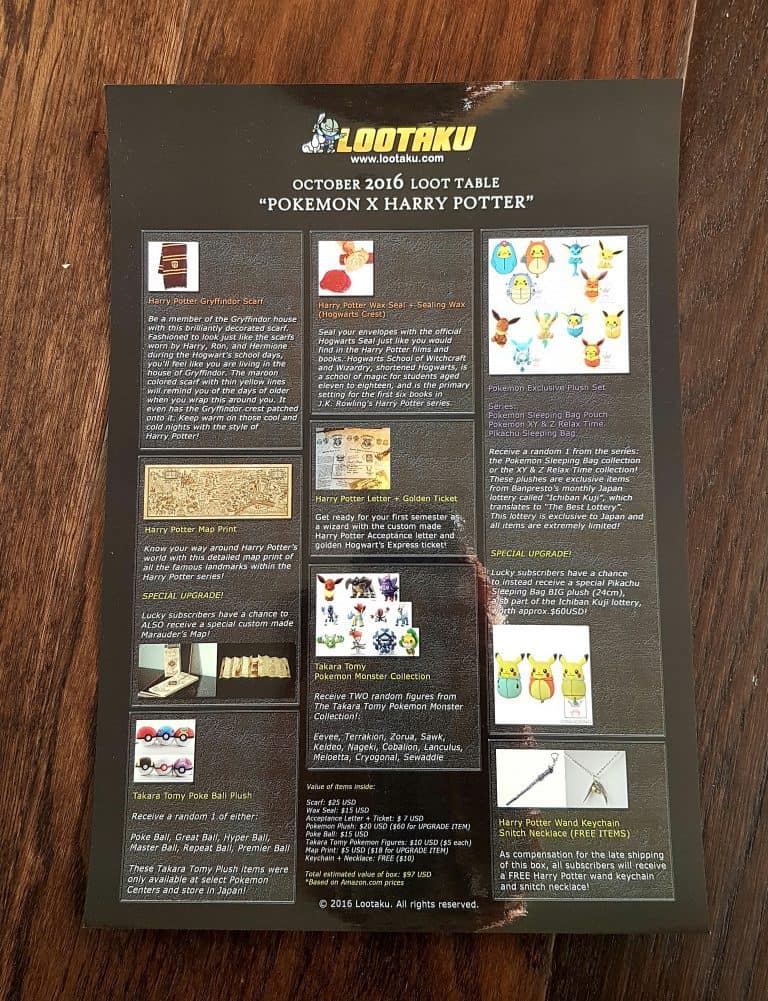 And finally, the menu. As always it’s at the bottom of the box (yay no spoilers!), and has a nice little bit of blurb for each menu item. It also tells you about the special upgrades and extra items in this box. You also get approximate USD values for each item, in case you want to figure out if you’re getting your money’s worth. (In my experience you always are.)

As always, I try to find the £ values/costs of each item, and add them to the £ cost of the box itself. I use an online currency converter so they’re correct at time of writing. I can’t always take into account shipping costs of individual items, but I do my best to be fair. Often I can find things on Amazon, but some of the items in Lootaku boxes are nigh on impossible to source in the UK, so sometimes I have to guesstimate. I also don’t use eBay as reference, as I find prices are not reliable or realistic.

Prices and values on the Lootaku website are given in Hong Kong dollars with approximate US dollar equivalents. A one month subscription is $380HKD/$49USD (three and six month subscriptions are cheaper). According to my currency converter this is £39.43. Shipping is $145HKD  which is £15.05. Kind of pricey, but it’s coming a long way.

Let’s see how the contents stack up.

Pikachu plush (regular, not the massive bonus one): £9.99

As these aren’t actually on sale this has been a tricky one to estimate. The menu says US$20 (£16.09) but I think that’s a little generous. These claw machines seem to be a big deal in Japan, and work a little differently to the ones in the UK. I’ve looked at these Japanese claw games, and read a few blogs, and it seems that (obviously) the better the prize the harder it is to grab. So you could spend an almost limitless amount of money trying to grab one of these things. Of course the rarity factor makes a difference, and a collector might pay a lot on eBay for one of these. However as this is impossible to estimate, being so subjective, I’ve simply valued it as a regular character plush.

These vary wildly in price, from £6 to £30. I’ve gone with £7.50 each, though again can be found for much more. However given the size of them I’ve gone for a lower value.

These are all over Etsy and Ebay, sometimes personalized for a little more. I’ve gone with an approximation.

There aren’t too many non-Bay places that sell these, and some have the house badge, some don’t. But I found one that looks identical in a proper shop, and this is the price including shipping.

This was also tough. I eventually went with an Etsy approximation, as I couldn’t find this exact one for sale anywhere.

Dammit, this was just impossible. I couldn’t find this exact map for sale anywhere, not even on Etsy. Several pictures of it, but not a single store. So I’ve simply thought about what I’d pay for it. I may be way off base, but hey, it’s my guesstimate.

Just to remind you, I’ve had to estimate some of these, and I also have left off the giant plush, the keyring, and pendant. Just for fun here what I worked out for these prices:

Giant plush: £19.99 (estimated but probably worth a lot more)

So at least an extra tenner’s worth for the two bonus items, plus even more if you got one of the upgrades. So we’re looking at pretty much £100 worth of goodies. Awesome.

AND even without the Pokemon things it comes to £55.97, then you’ve got that extra tenner with the freebies. So we’re up all round.

This is just terrific. I’ll totally admit that Pokemon is not really my thing. I’m old enough to remember the original games, though I never played them as a child, and never got into this particular franchise. But I appreciate it’s incredibly popular, especially right now with the mobile phone game app, so I’m probably in the minority. And everybody loves plushies. Besides, the rarity value of these two plushies, even if you don’t get the giant Pikachu, is a big plus. Also, the two little monsters toys are cute, and as they’re pretty hard to find they will be be very welcome to international subscribers.

As for Harry Potter, well, I love it. I’ve read all the books several times; I’ve seen the movies too, but seriously, they’re not a patch on the books. Seriously people, if you haven’t read them, do so now. The selection of HP-themed items in this box is incredibly well-thought-out, from the superbly detailed letter to all the wearables. I really like having things which are actually useful, and with the exception of the letter, which is just a really nice thing to have, every item has a practical function. So another thing which makes this box really stand out is the functionality of the contents. Not that I don’t like getting POPs and other toys, but having cool things to wear and hang on the wall raises this box to a whole new level.

(One note on scoring. The total score is an aggregate from several categories. I’ve put the ‘packing and delivery’ as 9/10. It was delivered pretty late, which is why the free items were included. Having thought about it, I think it was fair to knock off a single point for that, but no more, because of the compensatory extras. So this box gets slightly under the full five stars, but only fractionally.)

This is the best Lootaku Box yet - full with well-thought-out and functional items. I loved the Harry Potter theme, and am looking forward to the next Box!