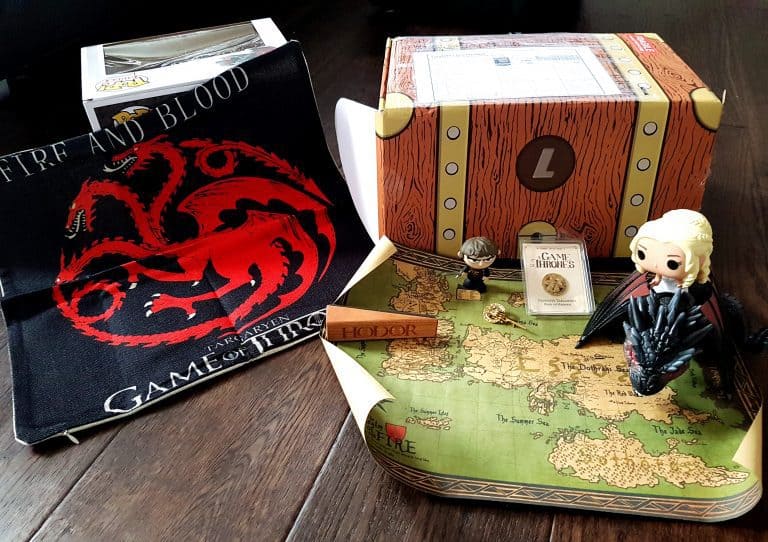 Game of Thrones fans, this month’s box is for you. And it was for me. I don’t completely geek out at Game of Thrones, but I loved the books (if you haven’t read them, you should) and while I only got as far as season 3 in the TV series that was pretty good too. I’m sure I’ll get around to watching the rest, though I wasn’t too happy to hear they’ve gone rather off-piste when it comes to following the books. Oh well.

But never mind, this box contained a fantastic array of GoT goodies. So let’s take a look!

First of all the box. As always, it’s the nicely-designed treasure chest box, good and sturdy as it has to survive the trip from Hong Kong. And a Fragile sticker too, even though there isn’t anything really fragile in it. Better safe than sorry though. 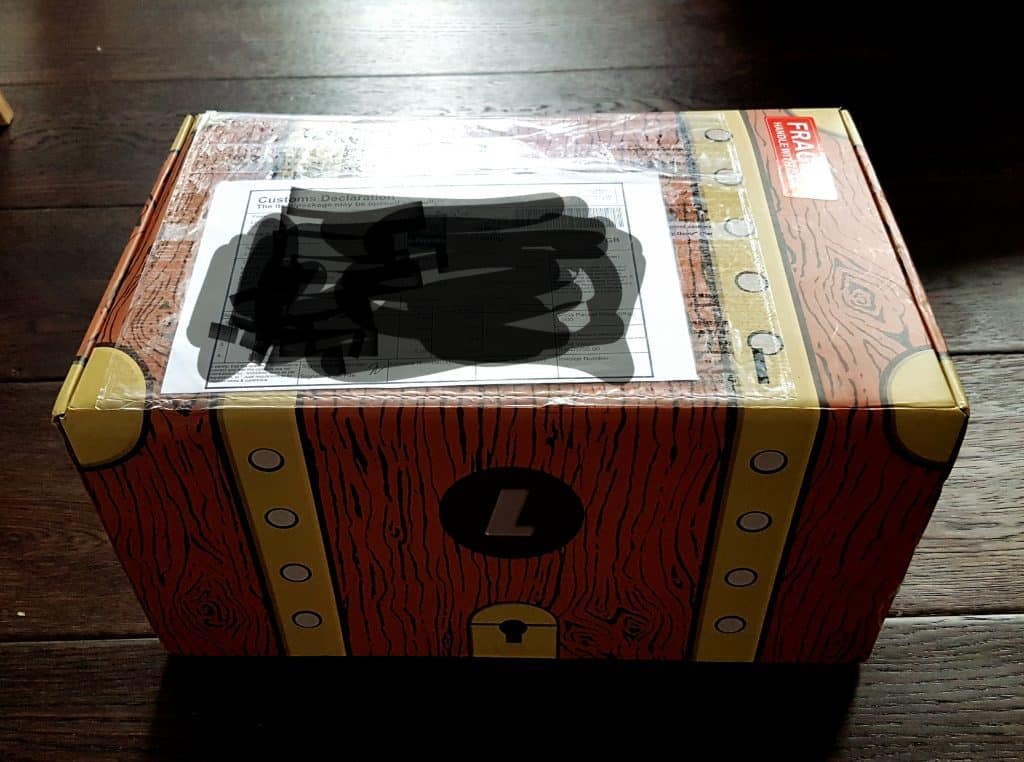 Time to open up. 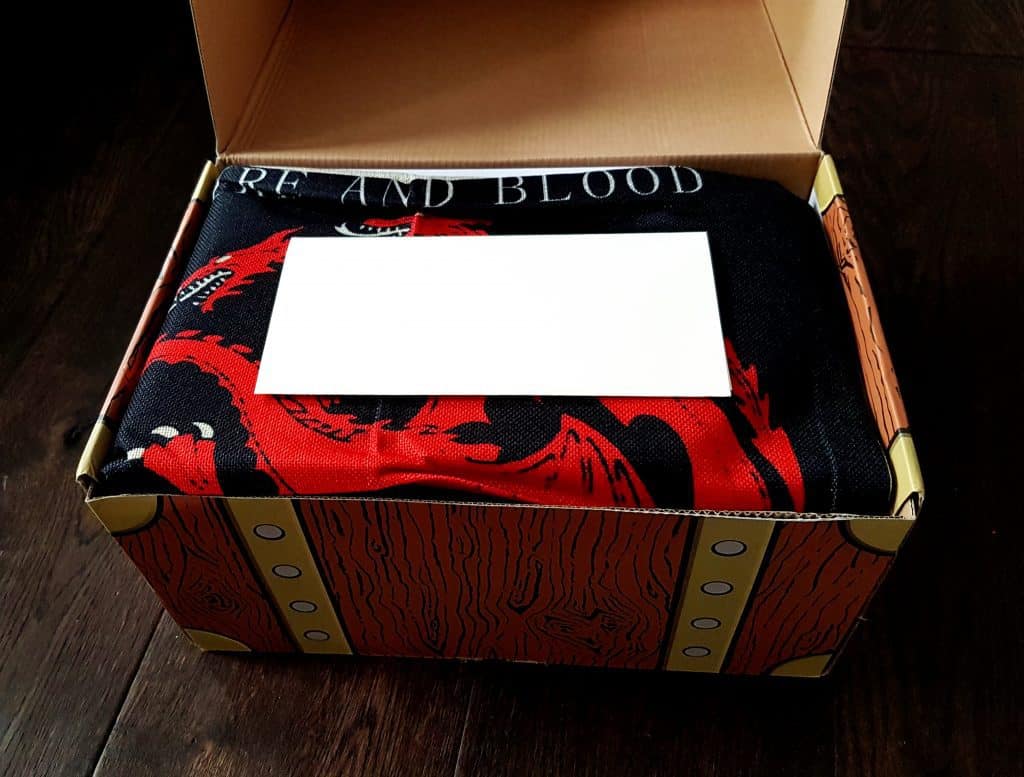 Ooooh. The Fire and Blood (or rather RE AND BLOOD) thing at the top pretty much showed what this box would be about. And as I said, I like GoT, so I was getting happy thoughts straight away. There was also the mysterious piece of paper on the top.What could it be? A note asking me to up my game with the reviews? Which would be harsh as I think they’ve been OK so far. How self-centered am I? Anyway it wasn’t anything personal, it was a rather intriguing GoT themed letter: 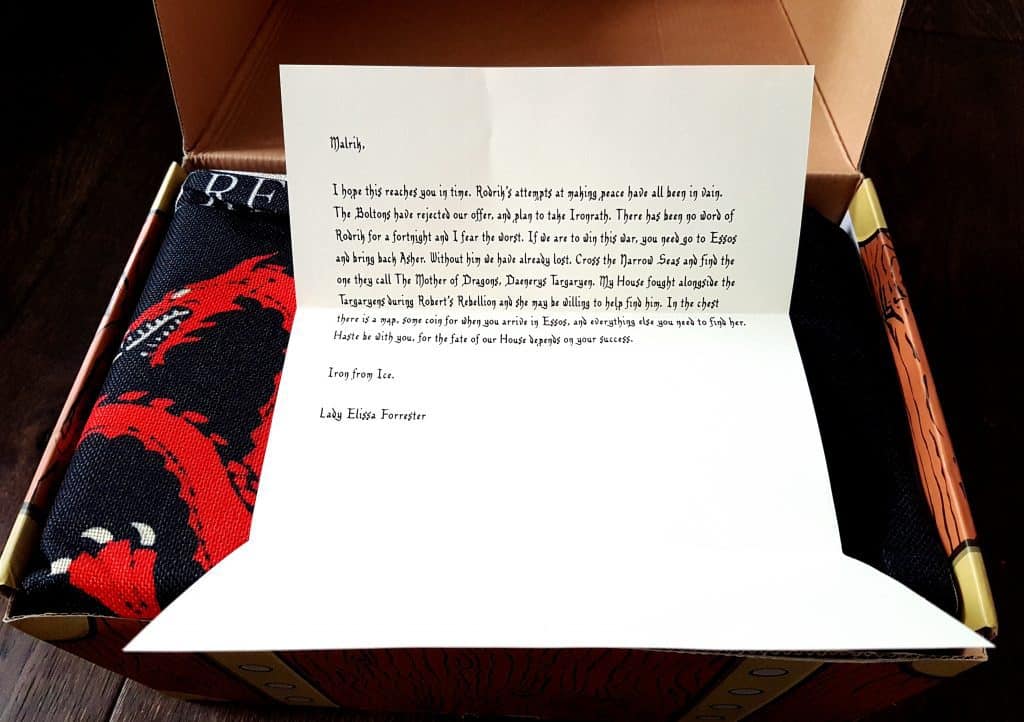 So definitely Game of Thrones. I like how it gave little hints as to what the box contained without being one of those annoyingly descriptive menu cards that tell you everything before you’ve had a chance to be surprised. I hate menu cards at the top of boxes, and one of the things I like about Lootaku is that the menu is always at the bottom of the box, so no spoilers. 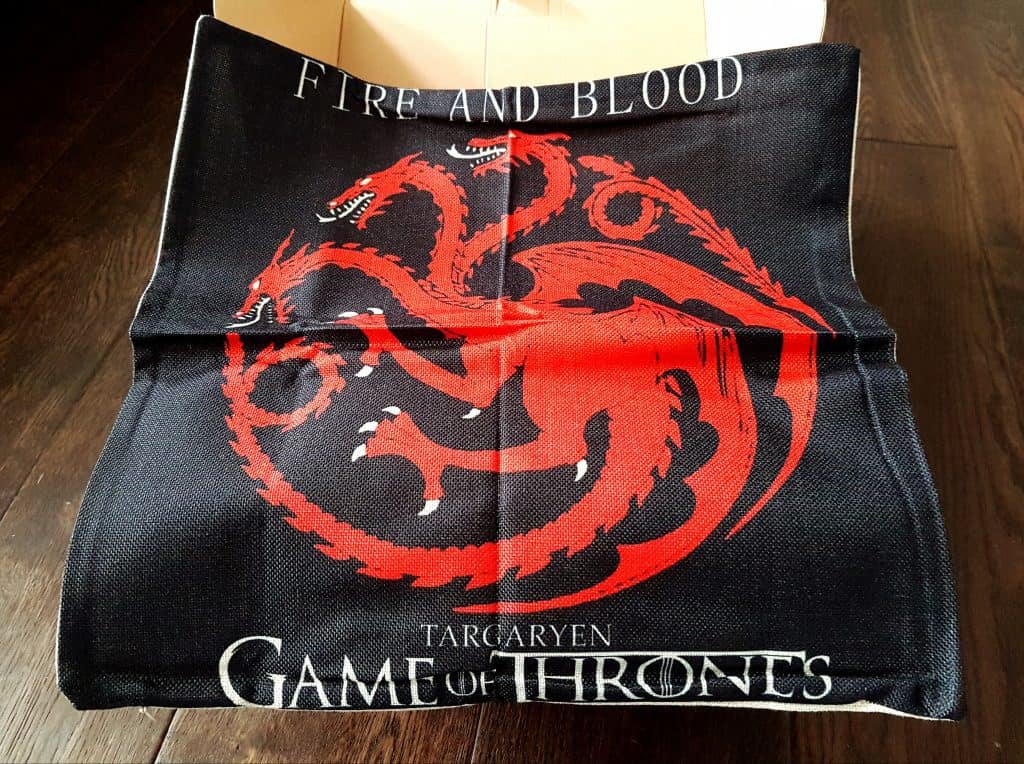 It’s a cushion cover! Rather fab. And of course Daenerys Targaryen kicks ass, so it’s rather appropriate for the kickee to have something comfy to rest on afterwards, yet adding insult to injury that said kicked ass is sitting on the sigil of the kicker. The quality is pretty good, the zip is proper hidden one. I wouldn’t like to say how well it washes, but it would look pretty good on the couch.

Next up, the biggest item in the box: 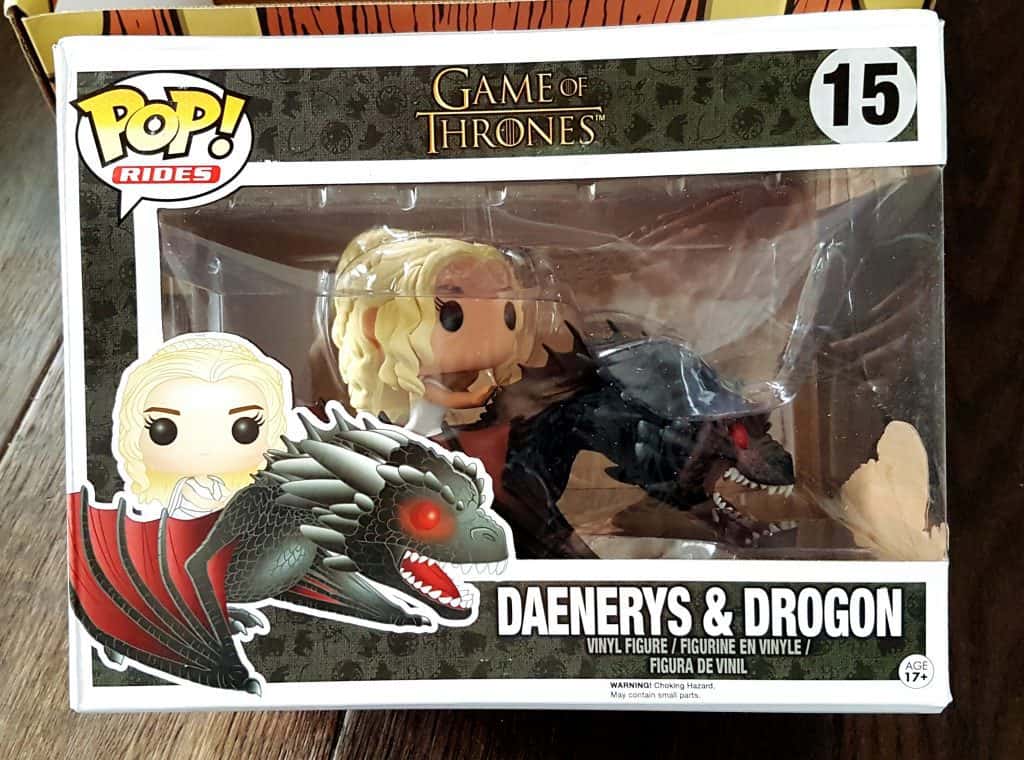 This is the biggest POP! I’ve seen, probably because it’s two figures. It’s remarkably heavy too. There’s Dany sitting astride one of her dragons, on her way to kick some ass. The Dany figure is removable, but doesn’t stand up on its own, though why would you want to separate them anyway? Nice.

Here is one of these mystery mini vinyl figures, which frequently show up in boxes of this type. The box was incredibly well sealed, so I managed to tear it whilst opening it up, oops. The figure itself was in a little black bag so you didn’t know what you would get. This cross-looking fellow is none other than the dreadful Ramsay Bolton. Horrible man. I was peering at the box trying to work out which character was which (they’re not labelled) as I thought this was one of the less obvious ones, but my husband recognized him straight away. He said that he looked a bit like Iwan Rheon (who plays him in the TV series of course) which once he said it I could totally see. (Fun fact: my husband did a West End show with Iwan Rheon several years ago. Despite his less than prepossessing looks, he has an excellent singing voice.) So a nice little figure of a psychopathic character you love to hate. And who comes to a very nasty end in the series. Ha.

A novelty, something useful, and a pun all in one handy item. It’s actually very nicely made, and for something which is superficially geeky it’s a beautiful little thing. 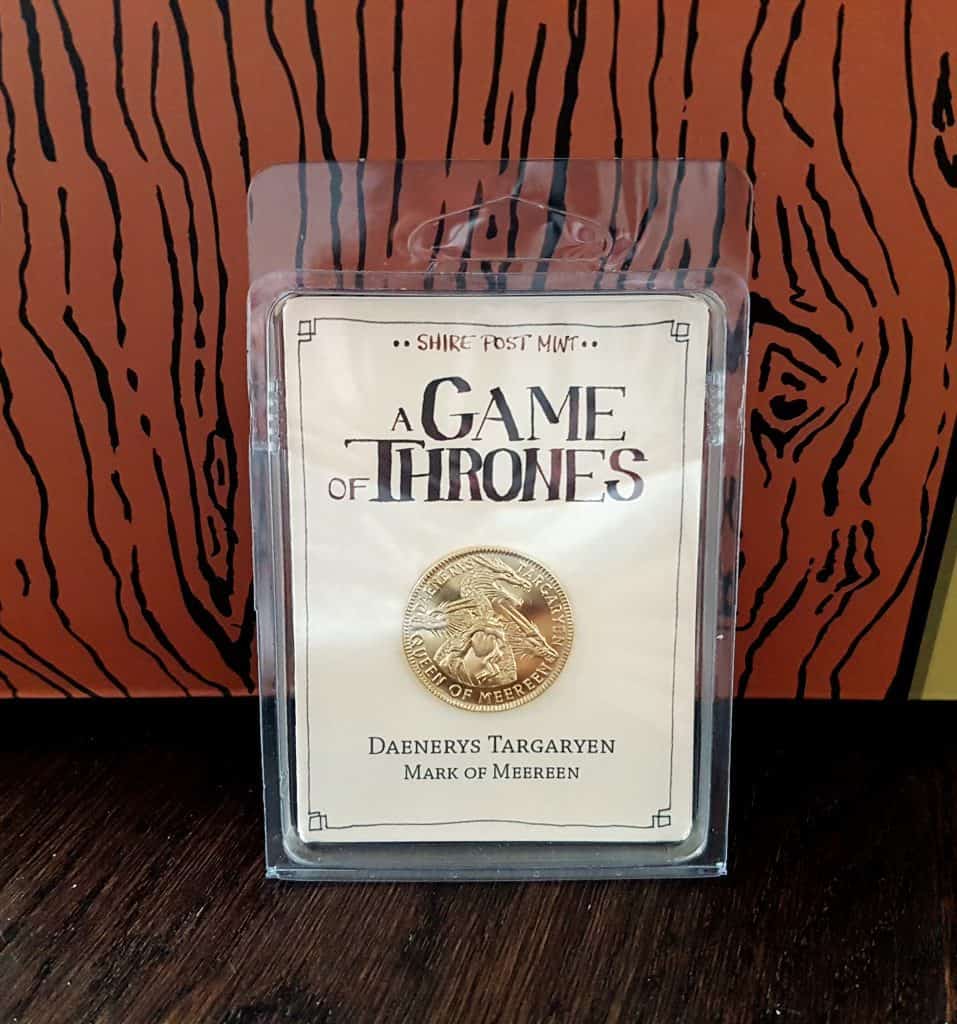 Ah, so this is the coin mentioned in the letter, a Golden Mark. While I’m not sure what it would get you if you took it down to Waitrose, you might have better luck if you can make your way to Essos. In the context of the GoT universe Dany issued these coins to demonstrate her hatred of slavery in all forms. Quite right too. In the real world, these can be used in games or collected. The company who makes them have many different sets available. And it’s shiny and pretty.

It’s amazing how many people want to wear this little symbol, given that the Hand frequently comes to a sticky end. But as you’re probably safe enough outside of Westeros, it’s a pleasingly discreet and attractive piece of jewellery. This one isn’t an exact replica from the TV show prop, as it’s both smaller and the circle is more ornate. But it’s pretty cool. I already have a little Mother of Dragons button on my jacket (thank you lovely husband) so this might make a nice addition. 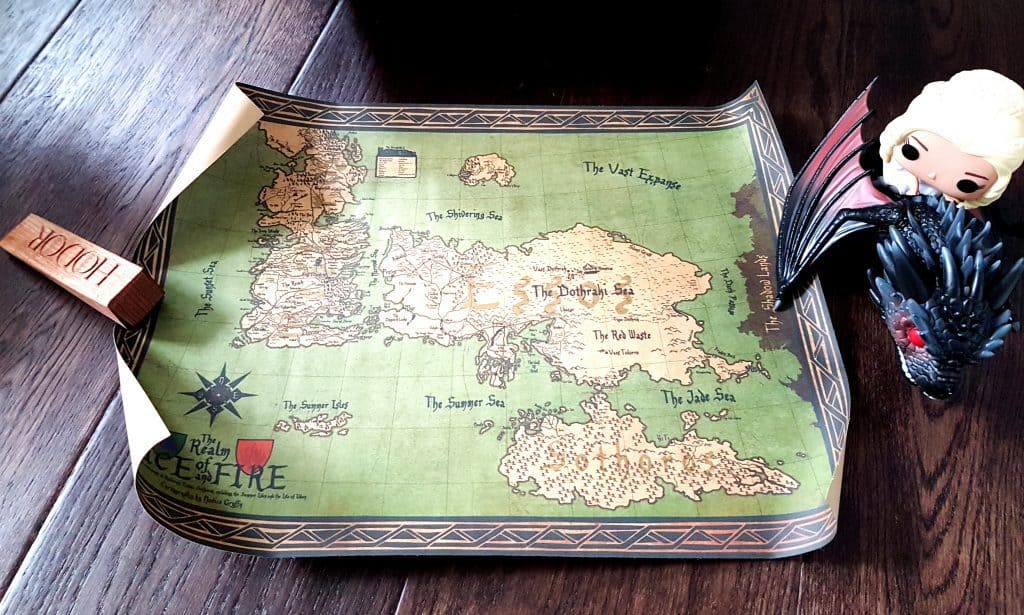 This was rolled up, so Hodorstop and Dany’s dragon are helping you to see what it is. That is, a rather nice print of the Game of Thrones world. It would actually look pretty good framed on the wall. The paper quality is reasonable, not flimsy, and the colours are pleasingly faded and vintage-y.

As I said before, this was at the bottom of the box, so after you’ve unpacked and drooled over all your goodies you can read more about them. As always, it’s well put together and informative.

It also contains the estimated value of the contents, and once again I shall do a UK conversion. Conversion rates are as of the day of writing. As usual, I use Auntie Google to find the bits and pieces. Amazon is frequently the best value, but if an item is priced elsewhere I’ll say so. Prices are of the day of writing this review, and I’ll include P+P where appropriate.

*All Lootaku subscriptions are currently marked as Sold Out on its website, so I can’t get up to date shipping prices. Those above are from a previous review, during which time the exchange rate has changed slightly. So I will use the amounts above, although today’s prices will be slightly higher

Contents, if you bought them in the UK:

Cushion cover: £11.74 (This was tricky, I couldn’t find it from a UK seller but I found a place that shipped free from the US.)

Hodorstop: £4.27 + £17.09 P+P (Holy cow! This came from the maker’s Etsy store, and as the maker is in Australia the shipping is very high. Nice though this is, you’d have to be incredibly dedicated to buy one of these on its own.)

Hand of the King pin: £5.00 (There were SO many of these online. The one included is not one of the ‘official’ ones, and I couldn’t find the identical pin from this box, so having looked at some of the others I’ve made a judgement call on the price.)

For the total I’ve made another judgement call. I’ve not included the shipping from the US and Australia, because I don’t think it’s realistic that anyone would pay shipping so far above the value of an item. So without those two items of shipping the total is:

Now I think that’s pretty damn good value. And there’s the extra bonus of having two items that are practically impossible to get in the UK unless one is prepared to shell out a ton of cash for shipping.

I was very pleased with this box. It contains a great selection of items: a couple of things for the home:some wall art, jewellery, and of course vinyl figures, without which no geeky box is complete. Clearly a lot of thought has been put into this one. The letter on the top was a great touch.

This month’s value is once again excellent. I’ve been very impressed that they manage to get a really good level of variety, with both high and lower value items.

Also, I think it’s extremely impressive that Lootaku is using items from small producers, such as the map and especially the doorstop, which is made by a guy in a shed in Melbourne who sells his stuff on Etsy. So good on Lootaku for looking beyond the usual suspects when it comes to novelty geek stuff.

Any Game of Thrones fan would go nuts over this stuff, and even if it’s not totally your thing, any item would make a marvellous gift for any GoT geek.