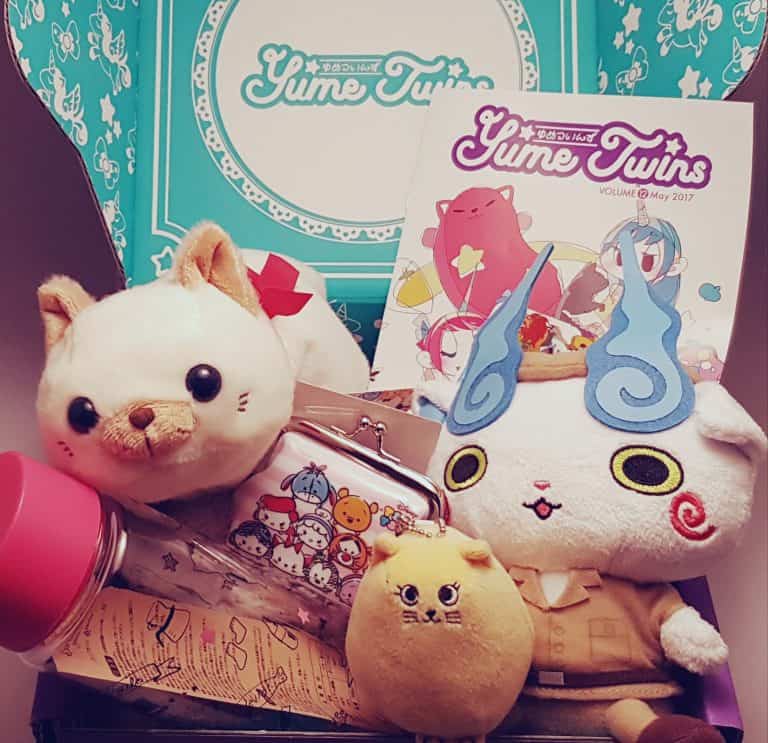 This month’s theme is Neko Purrrfect. Incidentally, ‘neko’ mean ‘cat’ in Japanese. Cats are a longstanding part of Japanese culture and history, and more recently the rise of kawaii culture has produced many characters inspired by this cultural mainstay. Hello Kitty, Neko Atsume, as well as many others, have become a hugely recognizable part of Japanese popular culture.

First of all, check out the box itself. 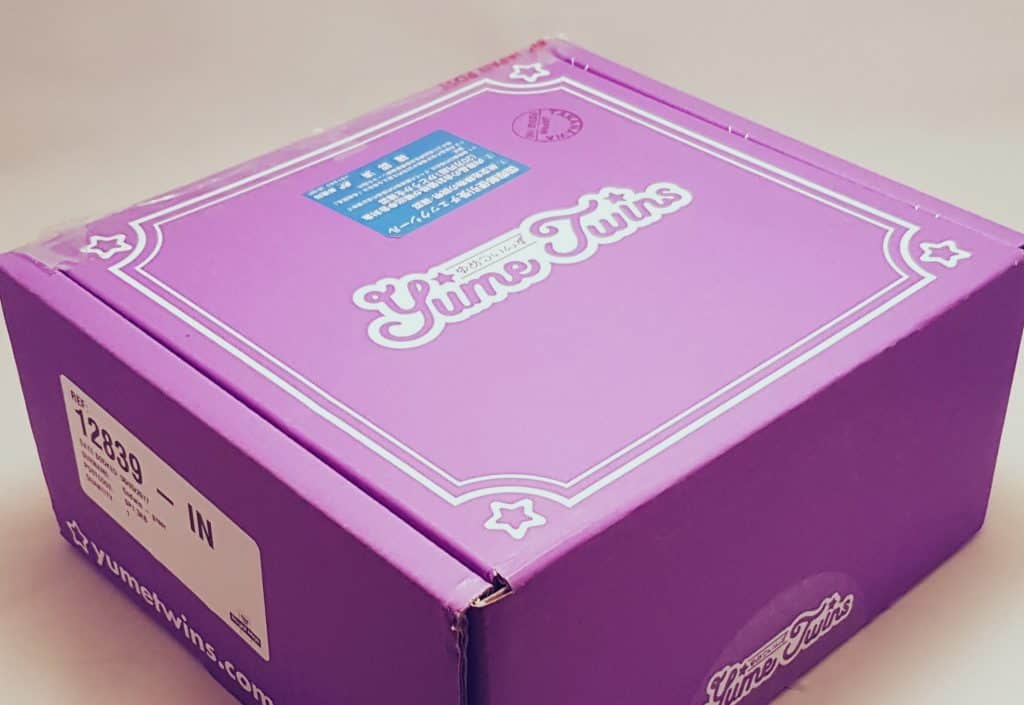 Such a pretty colour, and nice and sturdy. I’ve not had a damaged item yet.

For some reason I didn’t actually get a picture of the box opened. Usually I do, I have no idea why I missed it this time. Apologies. I can tell you that sitting on top is their magazine menu. 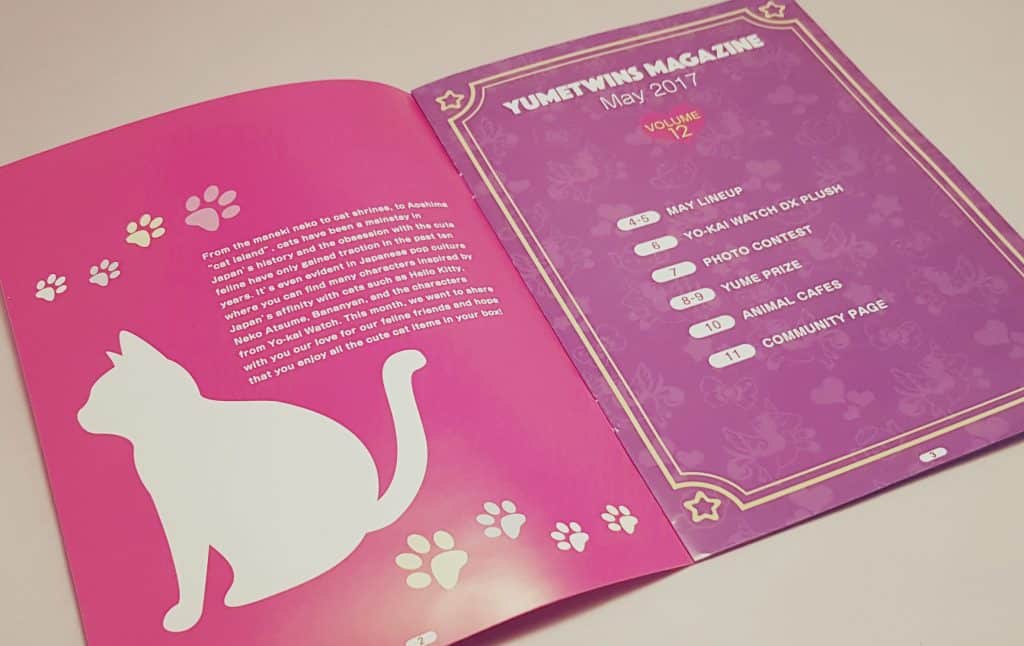 The YumeTwins menu is always nice.

It’s a well-produced little booklet, and as well as the usual contents list and competitions, this one also contains a page about Japanese Animal Cafes. These are actually very interesting. Because many apartments in Japan don’t allow pets, various establishments, including cafes, have sprung up allowing people to spend some time with animals. As well as cat cafes you can visit, among others, Owl No Mori, With Bunny, Tokyo Snake Centre, and Penguin Izakaya Ikebukuro. This is such a lovely idea. I would certainly welcome a place where I could drink coffee and cuddle puppies!

Anyhow, let’s take a look at what’s in the box. 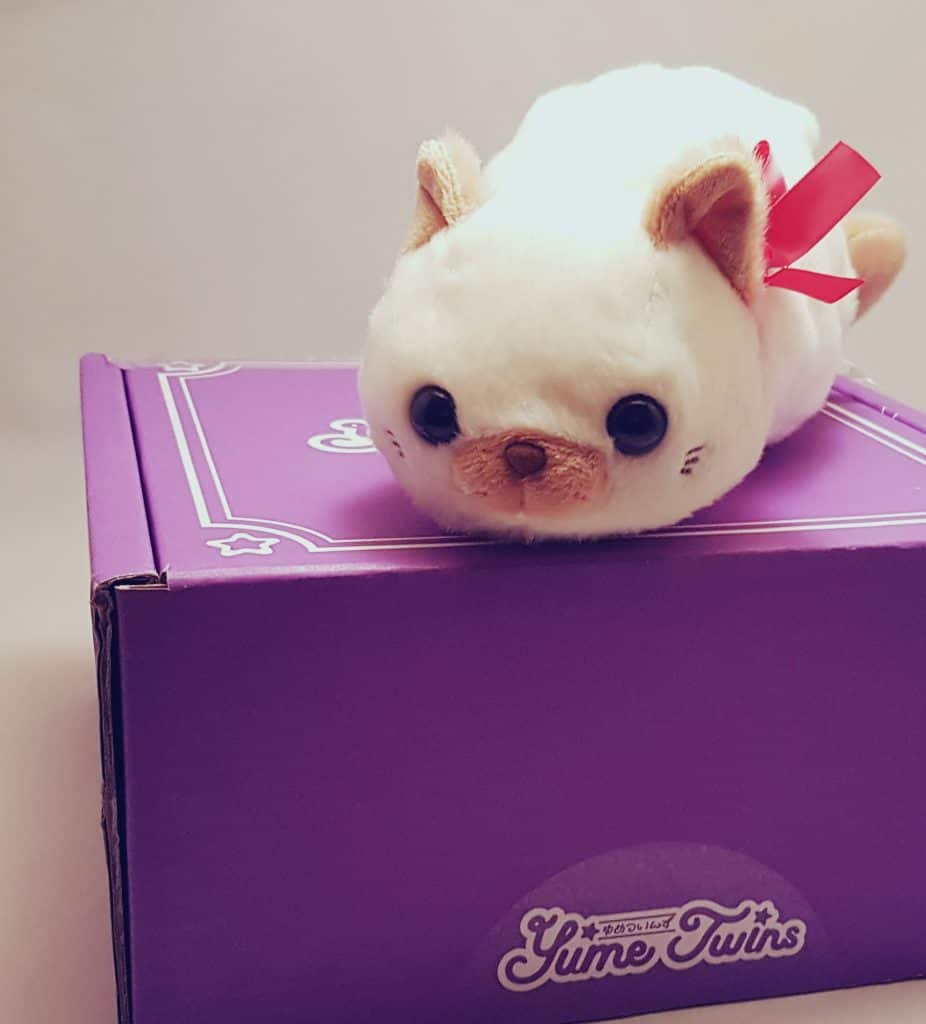 Miaw! First out is a kawaii essential, a plushie. This cutie is an Amuse Tsuchineko Plush Pouch. Amuse is a Japanese plushie maker who created these cute Tsuchineko cats who have their paws tucked underneath their bodies. Anyone who has ever had a cat will be familiar with this pose.

This is one of a possible fifteen different kitties in this month’s box! Some of the designs are highly colourful; my guy is quite plain but I like his pointed little ears and brown tail. His expression is very lovely too, it reminds me of my childhood cat about to sneak up on a bird!

However this little guy has a totally non-lifelike secret. Flip him over and pull his tail (do not do this with a real cat!) and… 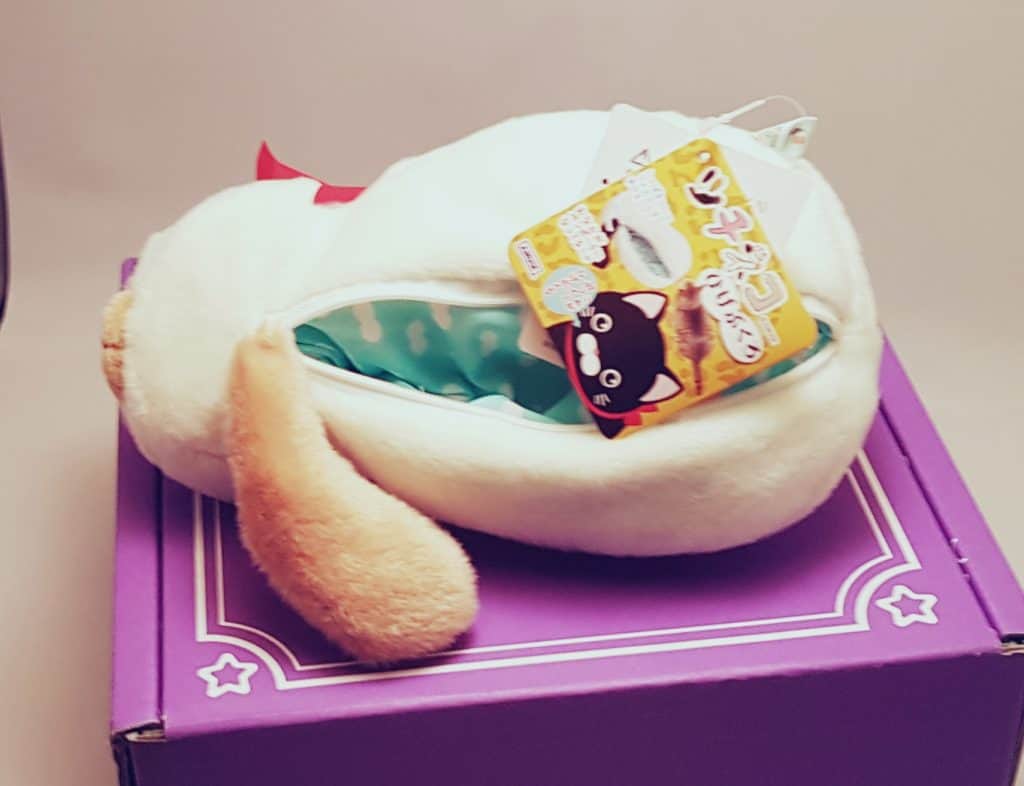 His tail is a zipper pull and he has a little pouch inside! (Bit of a dodgy picture, sorry.) This would be lovely for a pencil case, accessory holder, or simply for hiding little items. The lining is lovely spotted material which contrasts nicely with his white fur. 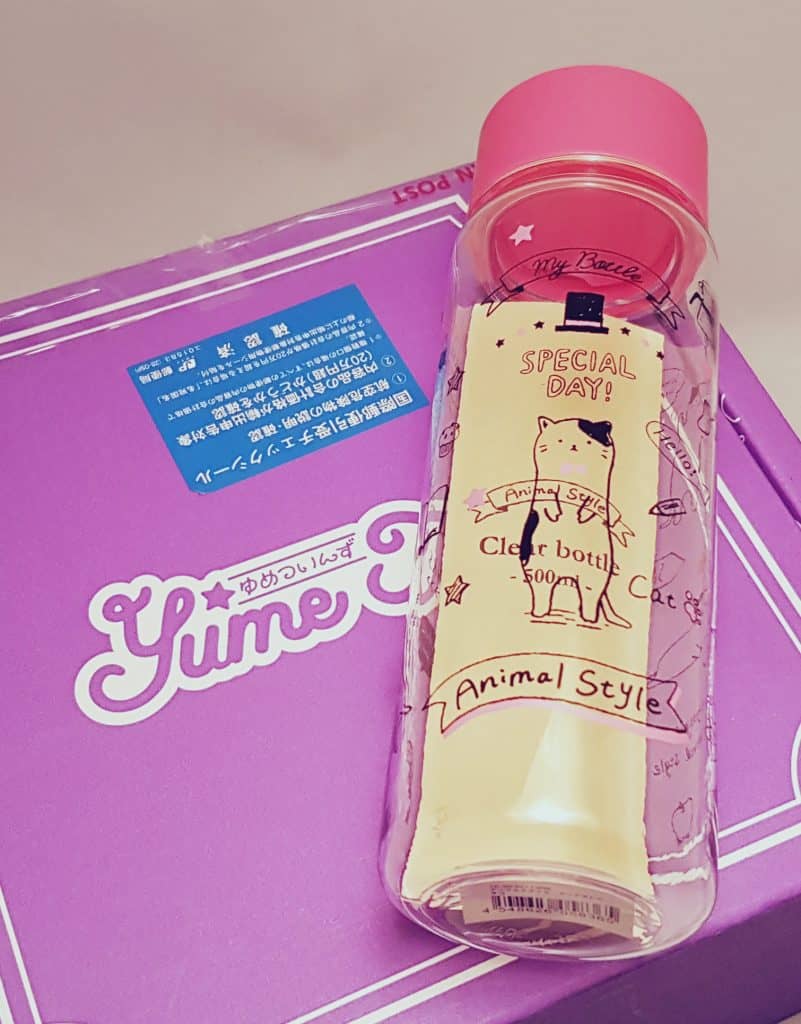 This is a cat-themed Animal Style Tumbler. It’s small enough to go in a reasonably-sized handbag, and apparently can withstand liquids up to 100° C. I don’t think I’d put a hot drink in there because first, heat and plastic don’t go well together and second, it’s not insulated so would be rather uncomfortable to hold when full of hot coffee! It would, however, make a lovely portable water bottle. 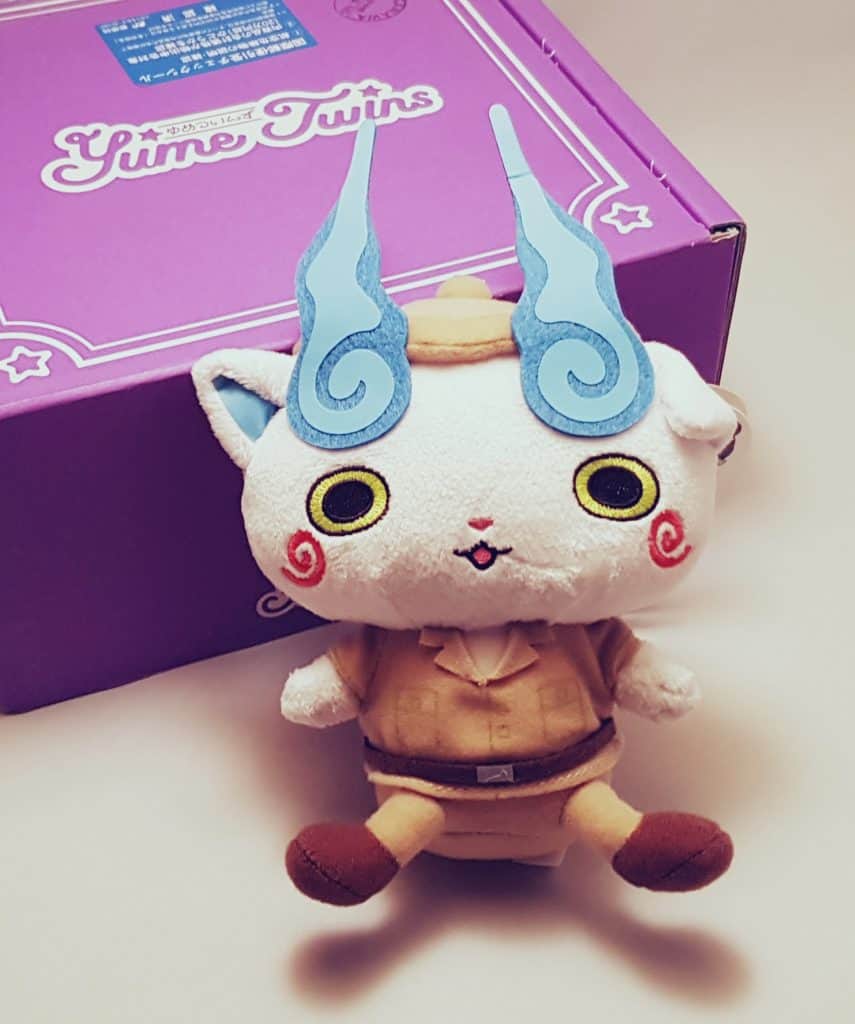 Next up, another lovely furry thing, a Yo-kai Watch DX Explorer Komasan Plush. Yo-kai Watch is a popular game and mixed-media franchise, and this plushie is a fully licensed toy from the maker Bandai. Apparently Komasan is a huge fan of ice cream. He’s ready for adventure in his super cute explorer outfit, and I just love his crazy horns and swirly pink cheeks! 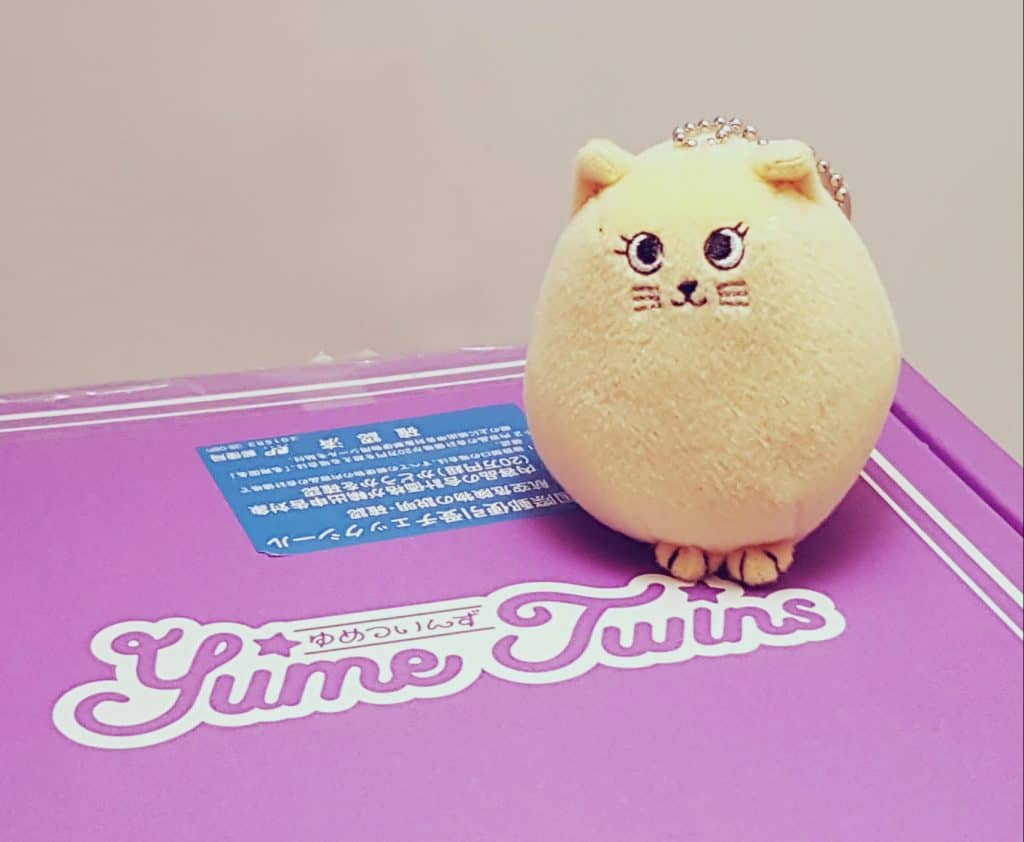 Here we have a Silvia & Silvester Mascot Keychain. This little ball of fluff is one of six possible varieties, and she has an little chain so you can attach her to a bag. Feline pair Silvia and Silvester were designed by the Japan Artist Society back in the 80s, and remain popular characters. They are licensed by plush maker Shinada. My little plush is a Silvia, who has open eyes, whereas her companion Silvester’s eyes are always shut. 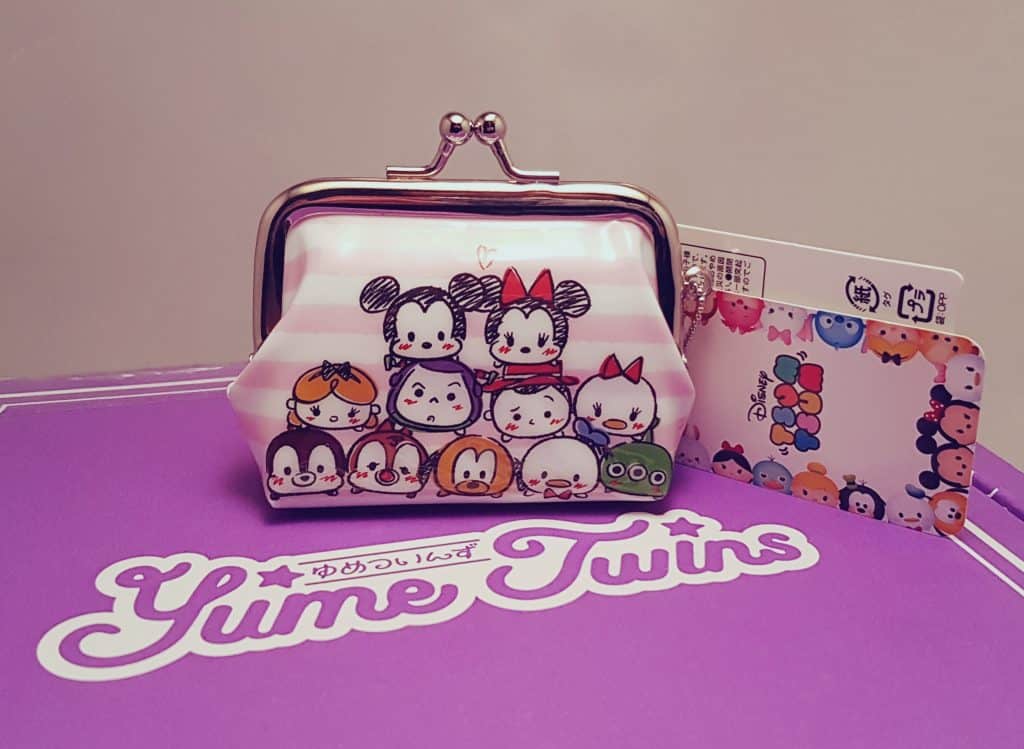 Last but not least is a Tsum Tsum Coin Purse. This popular Disney franchise is based on collectible rectangular toys which are designed to stack together. Can you figure out which little characters on in the purse? I can see an alien from Toy Story! Fun Fact: the name is derived from the Japanese verb tsumu meaning ‘to stack’. This little purse is Gamaguchi style, which literally means ‘frog’s mouth’. Like the little stuffed Silvia above it also has a keychain so you can attach it securely to your bag. If you didn’t want to use it for coins it would be the perfect place to keep your earbuds or lip balm.

So there you have all the items in this month’s box! YumeTwins are right on their game with this box. I love the neko cat theme, and they’ve tied in each item really well. OK, the purse isn’t catlike, but everything else is on point. And the purse is plenty kawaii so it doesn’t really matter.

Now, because YumeTwins items come direct from Japan and are seldom, if ever, available in the UK, I’m not going to do a detailed value breakdown for each item. I can tell you I found the Tsuchineko plush pouch for a tenner, and plushies the size of Komasan are a £10 at the very minimum. The other three items are going to set you back rather more than the remaining £3.17 of the cost of this box, so I would say you’ve got more than enough bang for your buck.

I’m pleased there are three squishy soft items in this month’s box. I do love having things which are both cute and practical, but last month’s box covered that incredibly well so the bottle and purse, which are both very useful, are just fine! Obviously the most premium items are the two bigger plushies, then the bottle, but the two smaller ones still feel thoughtful and of good quality, even if the purse doesn’t quite fit in with the overall theme.

This is a really excellent box. A great mixture of items, and a terrific kawaii factor. Love it!