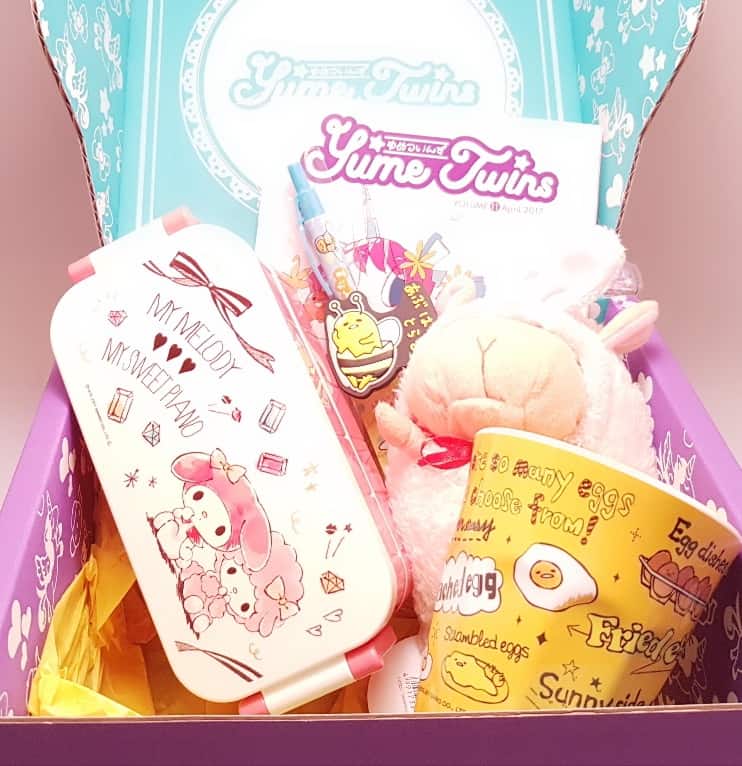 April’s theme is ‘Gudetama Easter’. Technically Easter is not celebrated in Japan in any significant way, as it has no religious or cultural significance. However, some of the (non-Christian) imagery has filtered through, and you can now find shops selling items such as Easter egg- or rabbit- themed candy. Apparently the American theme parks in Japan, such as Tokyo Disneyland, also put on Easter events, so it’s gradually creeping into the the wider public consciousness.

Conveniently, there is a Japanese cartoon character who is an actual egg, and he is the featured player in this month’s YumeTwins box. Gudetama is a pal of the endlessly kawaii Hello Kitty, and is lazy, apathetic, and grumpy. Despite this, he is massively popular and really quite adorable, despite his Eeyore-like demeanor. I suspect we all secretly relate to him! 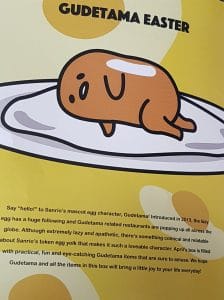 Here his is. What a funny little guy.

Anyway, let’s take a look at what the YumeTwins box is all about this month. 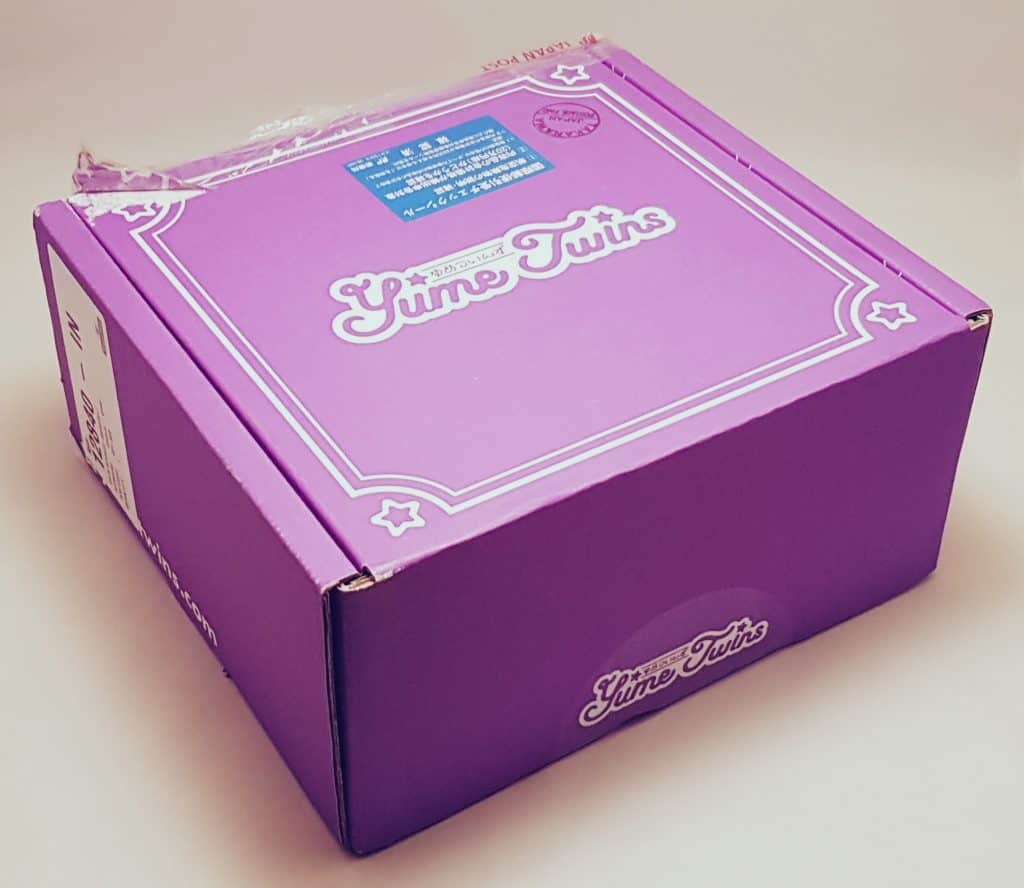 First of all, the box is really nice. I love that purple colour! And it’s reassuringly sturdy, no damage at all, despite the thousands of miles it’s travelled. 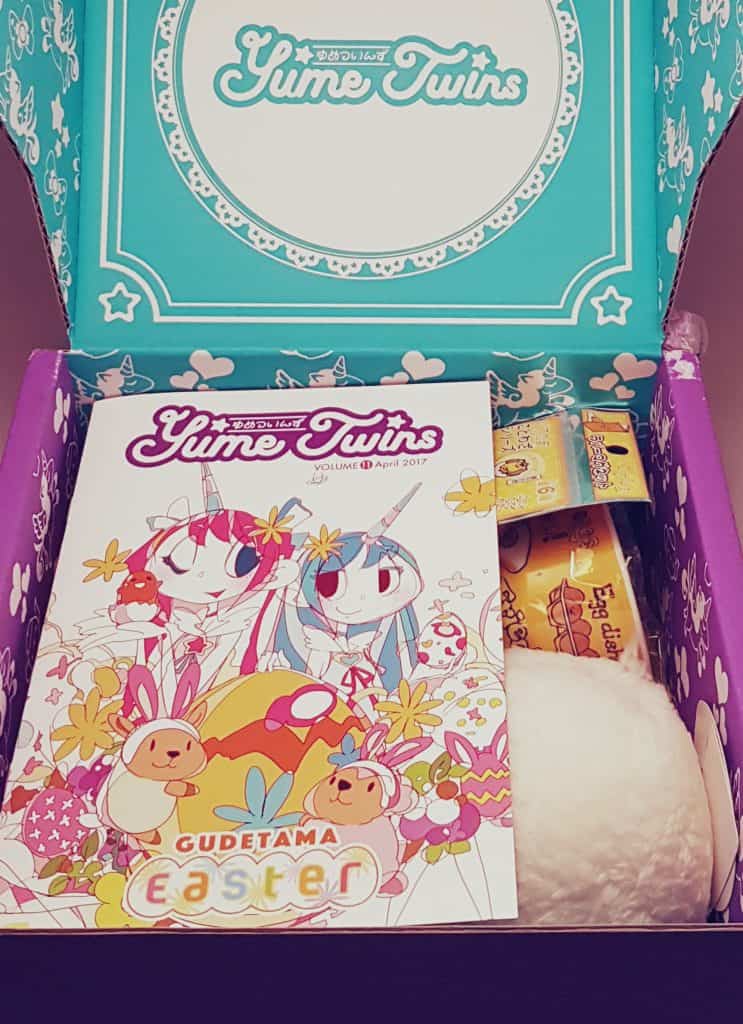 It’s always exciting opening up a box and getting a the first look at what’s inside. Right on top I can see their menu magazine, and underneath I see promising glimpses of something furry and Gudetama himself. 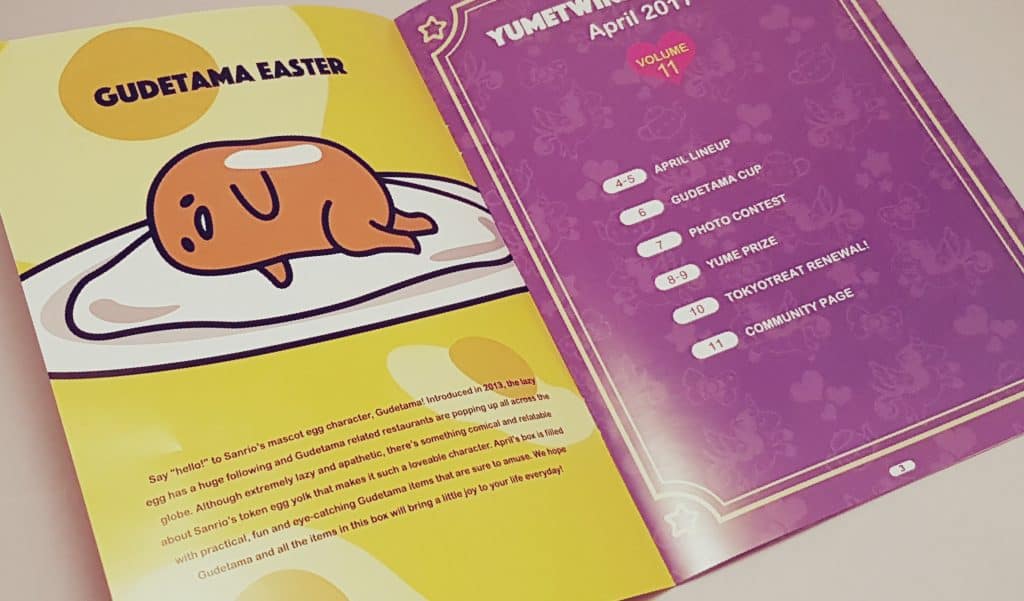 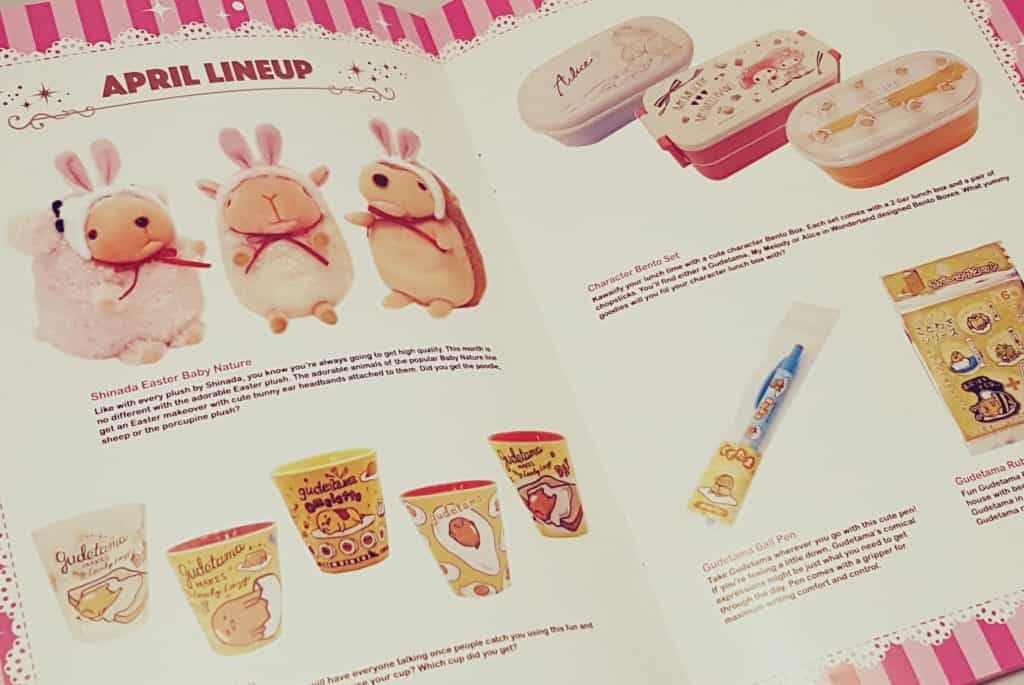 As well as a menu with descriptions of the items in the box, it contains details of a couple of competitions they run, with the opportunity to win free boxes or extra bonus goodies.

Now we can look at each item. I’m looking forward to furry squishy stuff. 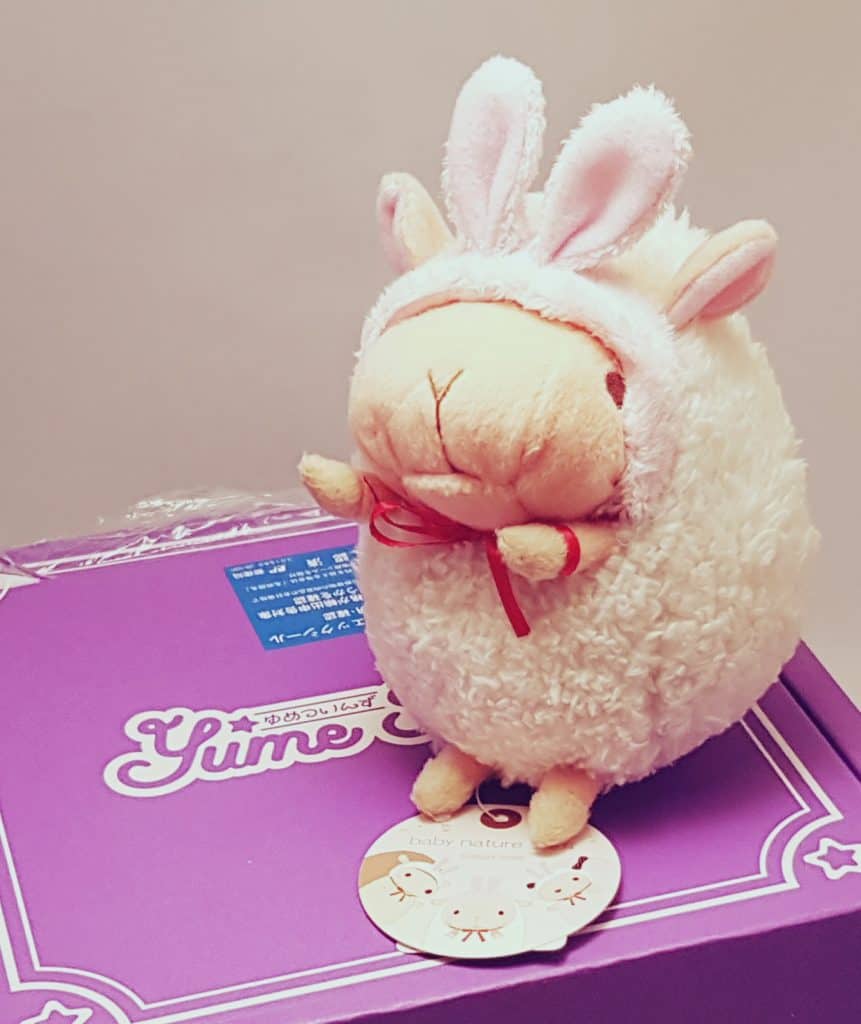 Furry and squishy. Two things I love. This fellow is a Shinada Easter Baby Nature Plush. Shinada makes high quality plush animals, and one of their popular lines is Baby Nature, a group of cute baby animals. There were three possible models in this box, a poodle, a sheep, or a porcupine. I got a sheep, and for this special Easter version this adorable little guy has gotten an Easter makeover with the addition of little bunny ears! He’s just so soft and lovely, and has such a sweet expression on his face. 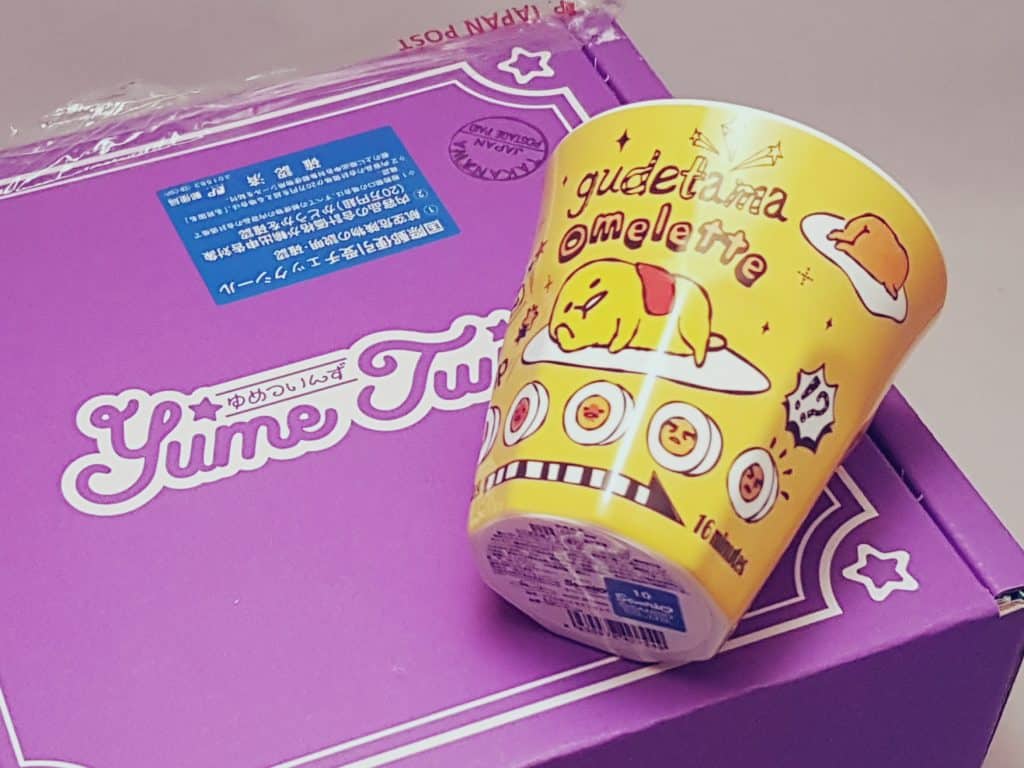 Next we have the first Gudetama item, a melamine Gudetama Cup, which is both cute and practical. I love a bit of practical, me. There were five possible versions of the cup included, and I’m so glad I got this one. Poor Gudetama is looking rather miffed at the prospect of being turned into an omelet, and his expression really makes me laugh. This cup is nice sturdy melamine, and apparently is dishwasher safe, which is a bonus because I’m lazy. 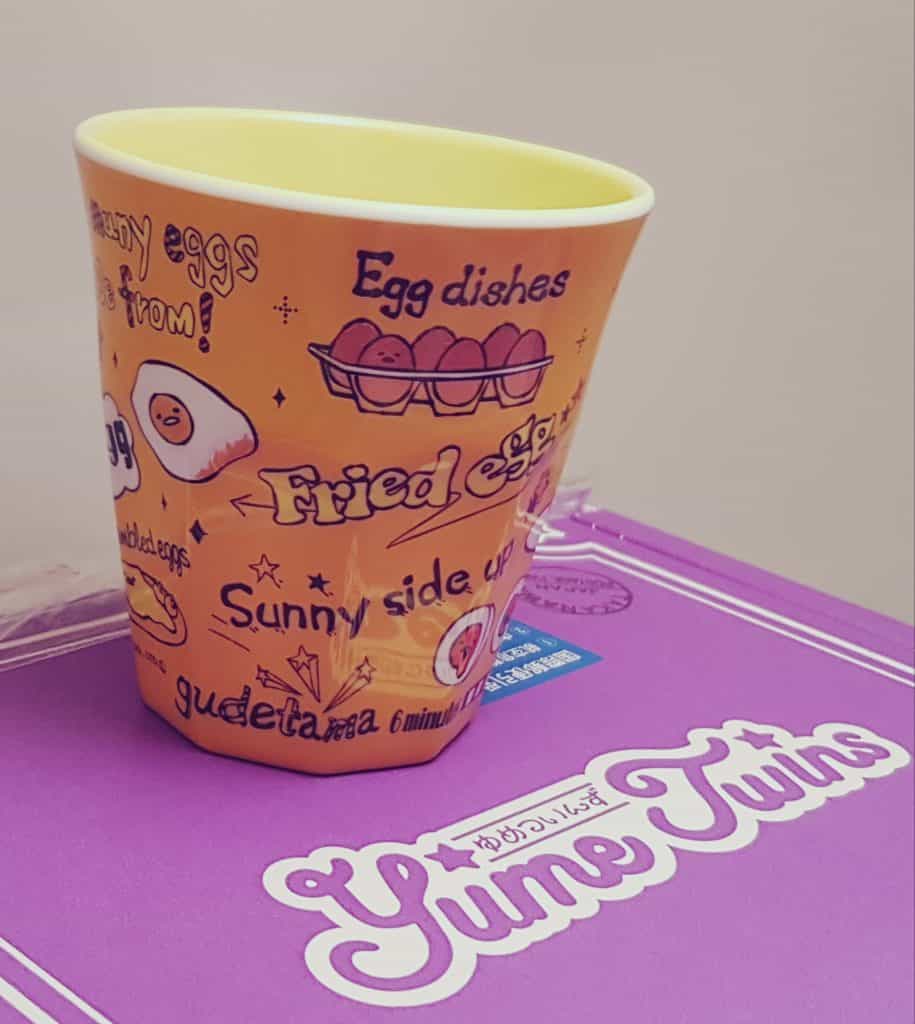 Here’s another view. So many egg dishes to make! 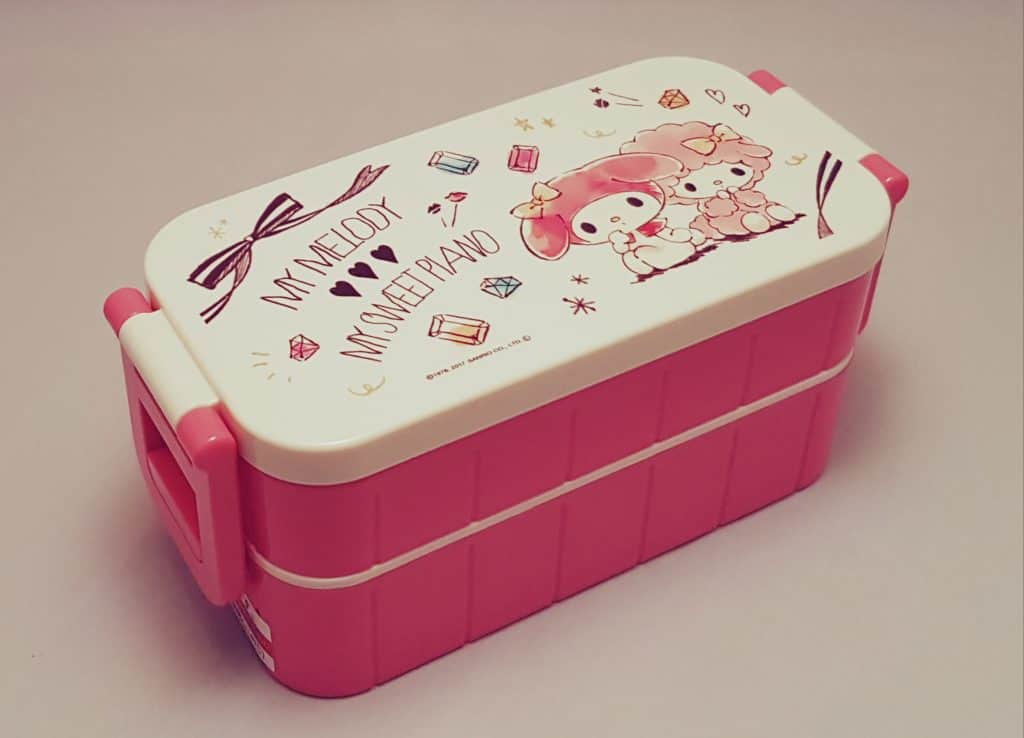 Another practical item with a high cute factor. This Character Bento Box had a possible three options: Disney’s Alice, My Melody (above), and Gudetama. 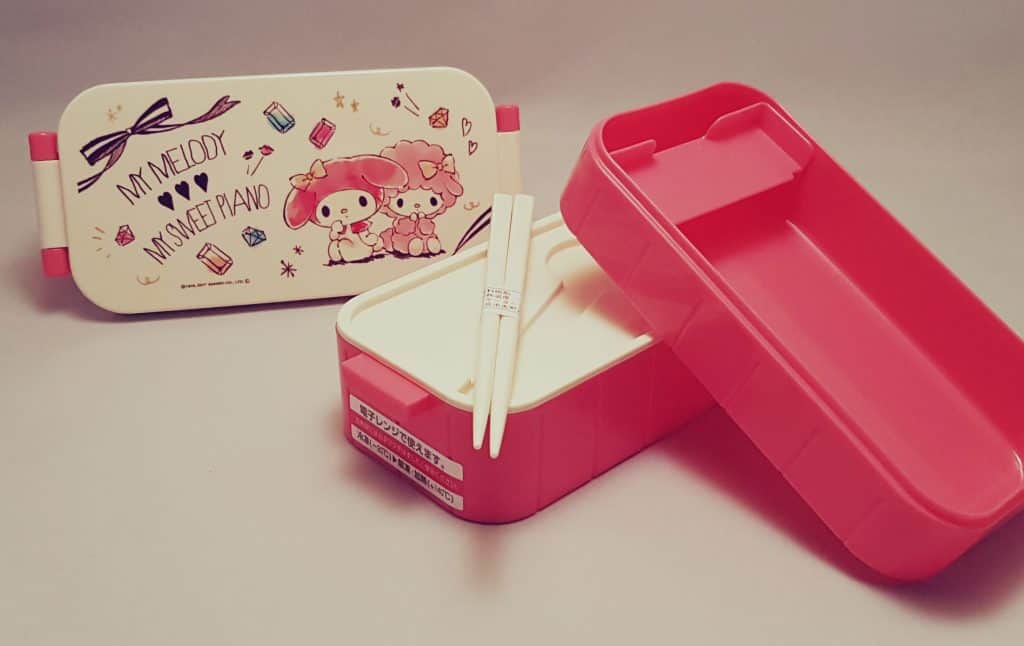 It has two main sections, plus an adjustable and removable divider, and comes with its own pair of chopsticks. The lid clips on very firmly, and though I wouldn’t try putting anything liquid inside the lid certainly won’t come off without being unclipped. Apparently it’s not dishwasher safe but can be used in the microwave. 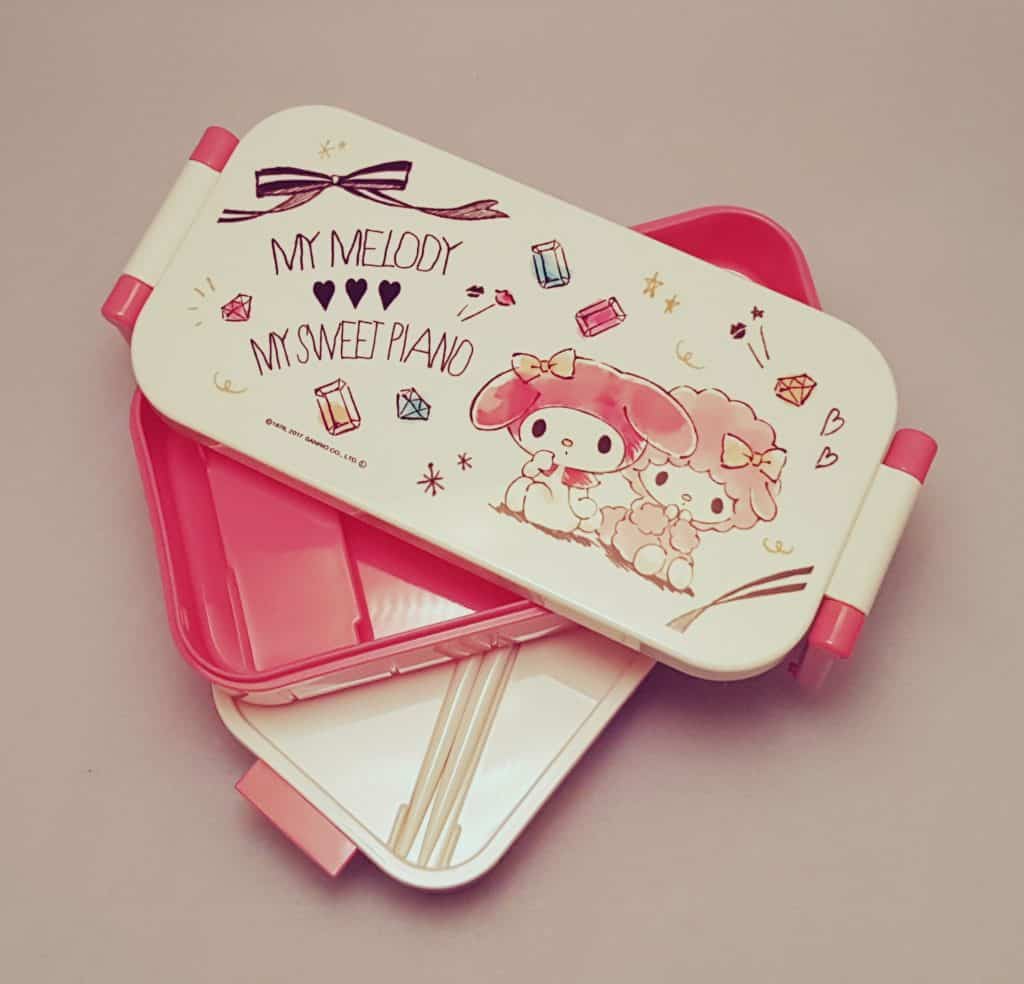 I must confess being a tiny bit disappointed I didn’t get the Gudetama box, just because from the picture it’s satisfyingly kawaii but not as cutesey as the My Melody version. That being said, the design of this one is the best, in my opinion, as the other two have a band to keep the box shut rather than clips. And I just know the band would get lost immediately!

The last two items are quite small. 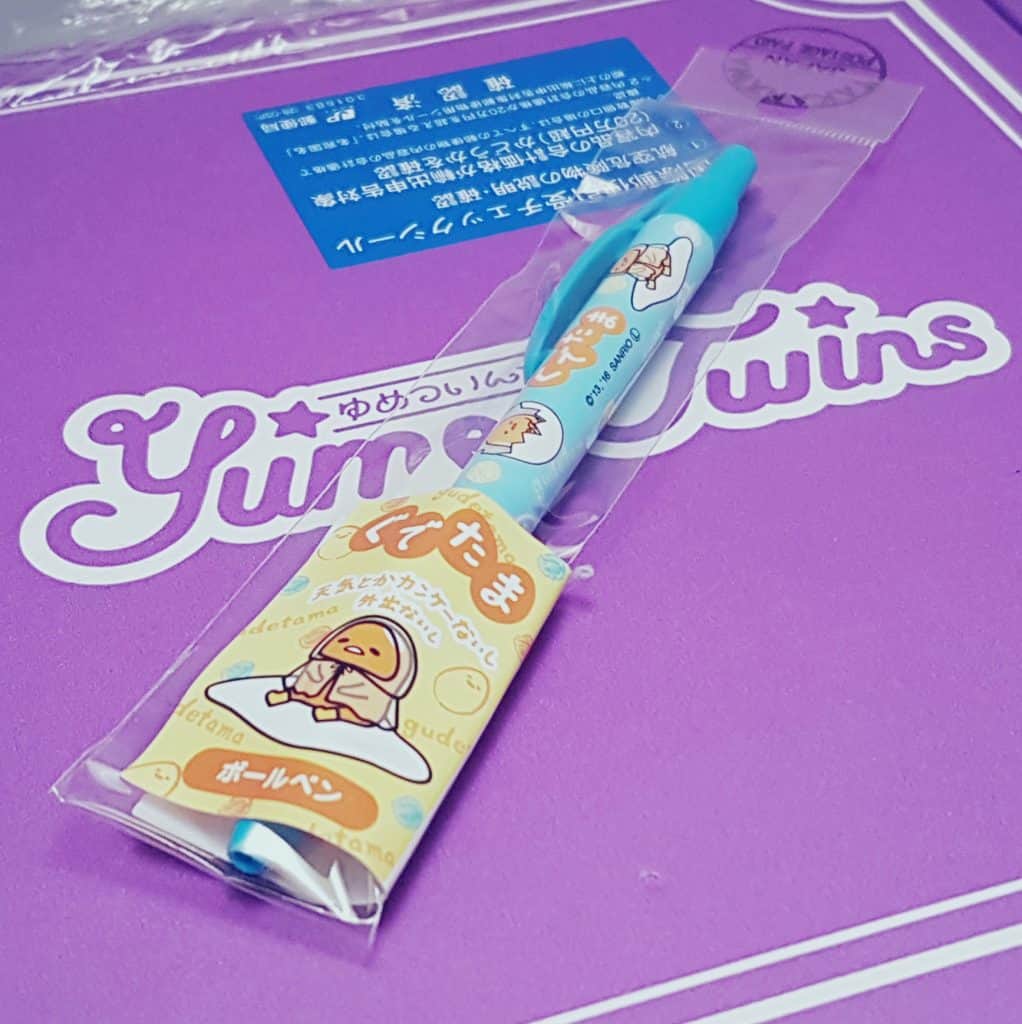 This is a Gudetama ballpoint pen. Pens are always useful, and this one has a good rubber grip so I might give it to my daughter. Though I might not. 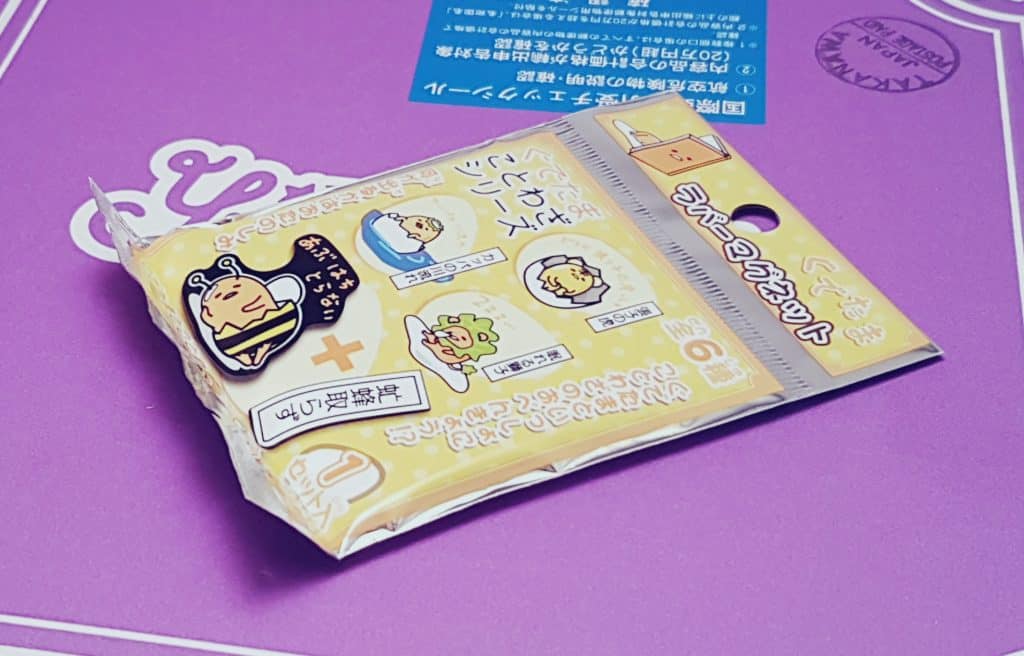 Finally, a little Gudetama rubber magnet. You get one of six possible designs, and because it’s a blind bag you don’t know which one until you open it. 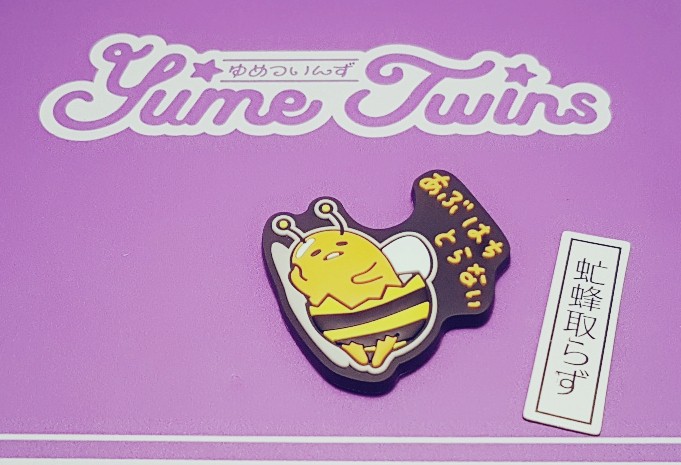 There he is! He’s dressed as a bumblebee and is very appealing. There is also an additional little panel magnet with more Japanese writing.

I decided I wanted to know what the words read, so I contacted the lovely people at YumeTwins and they sent me this:

‘It’s a Japanese joke (abuhachitorazu) means “attempting two tasks simultaneously, accomplishing neither“.
Then Gudetama replied with (abuhachitoranai) that means “not attempting to do any of the two tasks at all” because he’s just too lazy.
Gudetama is wearing bee suit because abu means wasp and hachi means bee.’

So there you go! I love that it’s a pun, and even though the pun doesn’t exactly translate, it’s very clever. I’ve also learned new words!

Anyway, it’s a nice little magnet, and now lives on our microwave.

Here are my thoughts on this one. Overall I enjoyed it a great deal; it was certainly a big step up from last month’s box, which I wasn’t hugely keen on. There is a satisfying variety of items here. I really like that three of the items are practical as well as being attractive and kawaii. The cup is my absolute favourite. The squishy little Easter sheep is just adorable and happy, and the bunny ears make it extra special. The bento box, despite not being my favourite character, is actually a really good and practical one. Again, it would have been cool to have another Gudetama item, but mine is the better bento box design. As for the pen and magnet, they are both cute, and of course you can never have too many pens. I do feel like they were a bit of an afterthought as they are both a bit on the ‘tiny novelty’ side for a premium box. One or the other would have been fine, but I think the fourth item should have been a little bit bigger.

On to value. Because these items come directly from Japan and are effectively unavailable outside Asia I’m not going to do a detailed breakdown. Even taking into account the two items which are on the small side, I am completely confident you’re absolutely getting your money’s worth here. I don’t think you could pick up a bento box, character cup, and plushie and get much change from £25. Throw in the pen and magnet and you’re doing even better.

This is a terrific box. There are definitely premium kawaii items in here, and I love the limited-edition plushie. I think TokyoTreat has been very clever with the theme, using a totally non-Japanese holiday as inspiration and tying it in with a very popular Japanese cartoon character.

I’m very happy with this!