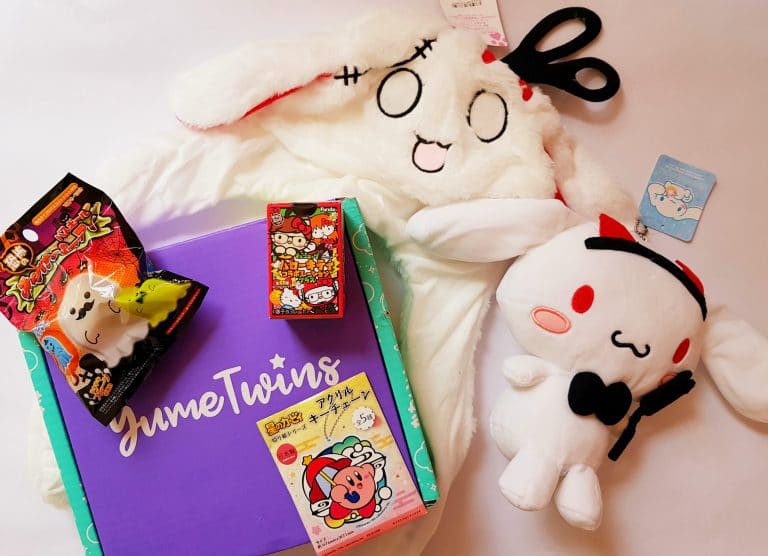 YumeTwins is a monthly box of Japanese kawaii products from Tokyo. It is part of the TokyoTreat subscription box group which also includes TokyoTreat and nomakenolife.Each box contains 5 kawaii items including plushies and lifestyle goods plus premium anime brands. 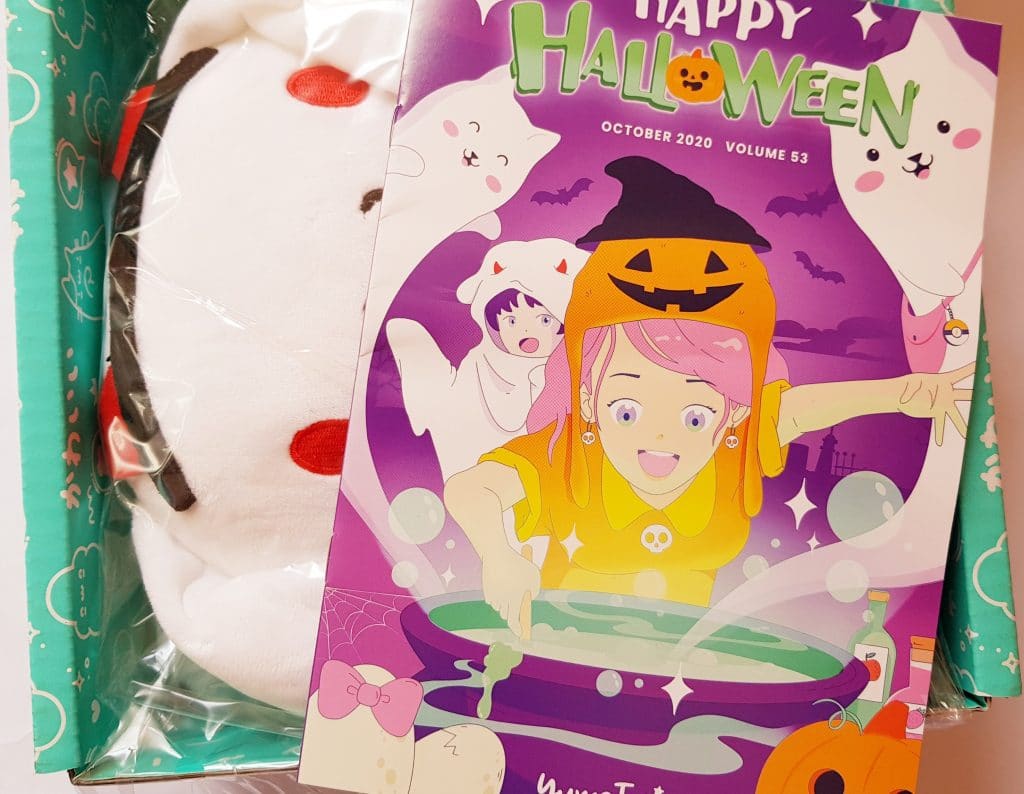 Being October, of course we had to have a Happy Halloween theme! I can’t wait to see how YumeTwins has combined the cute and the spooky this month. 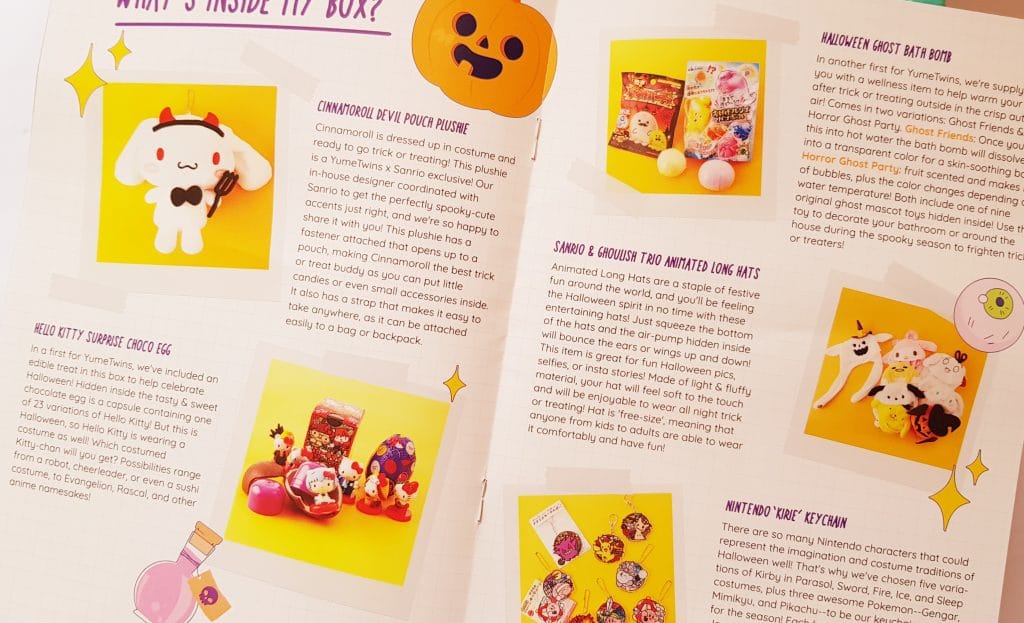 Inside the menu booklet is a full list of all the cute and creepy goodies. There are also extra photo competitions and giveaways.

First, a Cinnamoroll Devil Pouch Plushie. Who would have something so adorable could also be devilish? Cinnamoroll is dressed for Halloween with a horned headband, bow tie, and tiny trident. For an extra creepy touch, his usually blue eyes are red!

Not only that, but this plush is actually exclusive to YumeTwins, who have collaborated with Sanrio to create this plush that can’t be found anywhere else!

On the back of his head is the zippered pouch. It’s pretty small in comparison to his actual head, but you could definitely fit a few secrets in there! He’s also got a loop for hanging, though this is a largeish plushie so he wouldn’t be idea for hanging on your bag as a mascot! 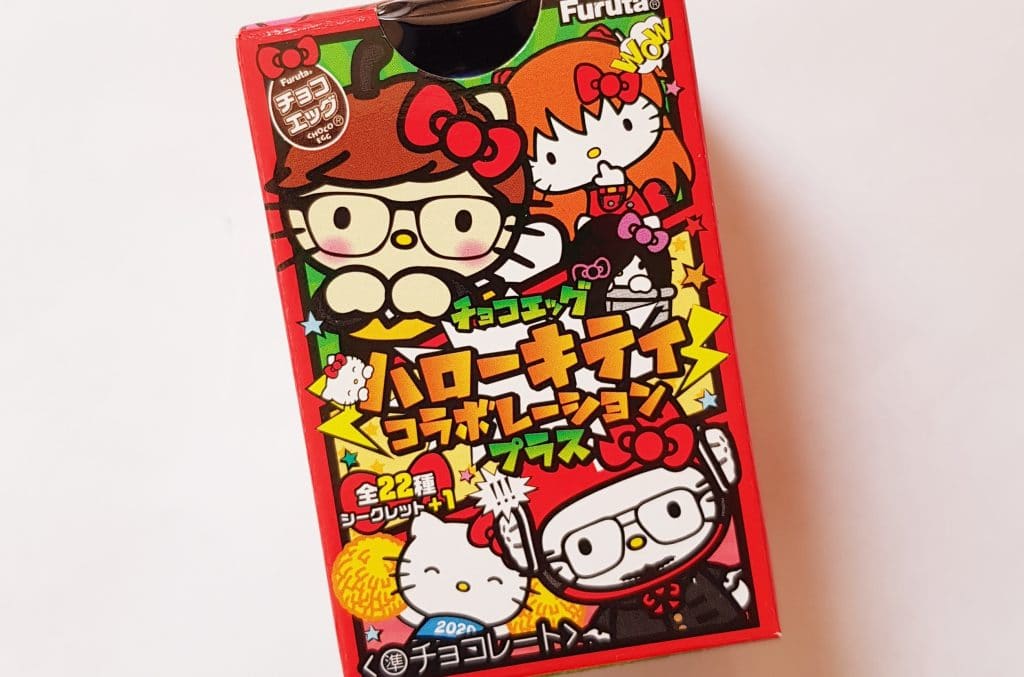 This Hello Kitty Surprise Choco Egg is the first time an edible has been included in YumeTwins. This is a milk and white chocolate egg containing a capsule with a Hello Kitty figure inside. There are 22 variations, all in different characters. What a nice Halloween treat! 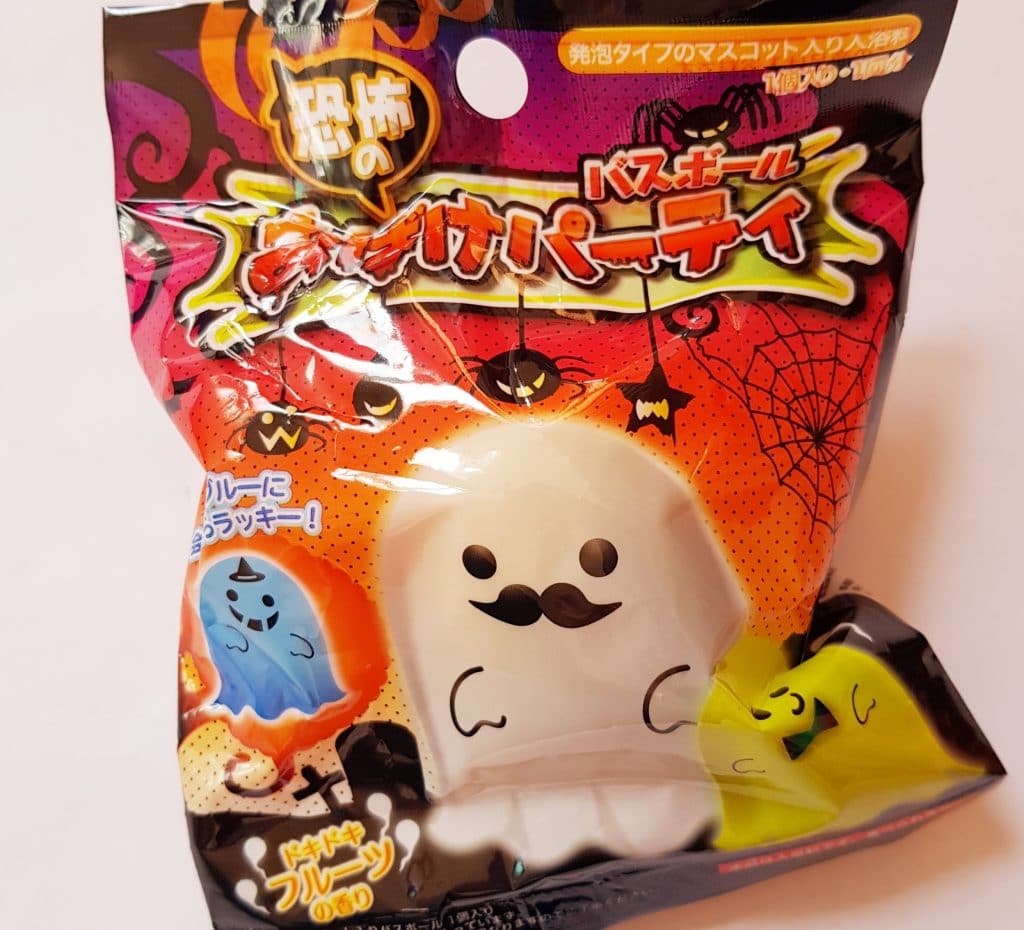 Halloween Ghost Bath Bomb is another new adventure for YumeTwins. There are one of two possible bath bombs, one which is softly scented, and one which is coloured and bubbles. Both bombs contain a little ghost figure that is revealed when the bomb fizzes away. 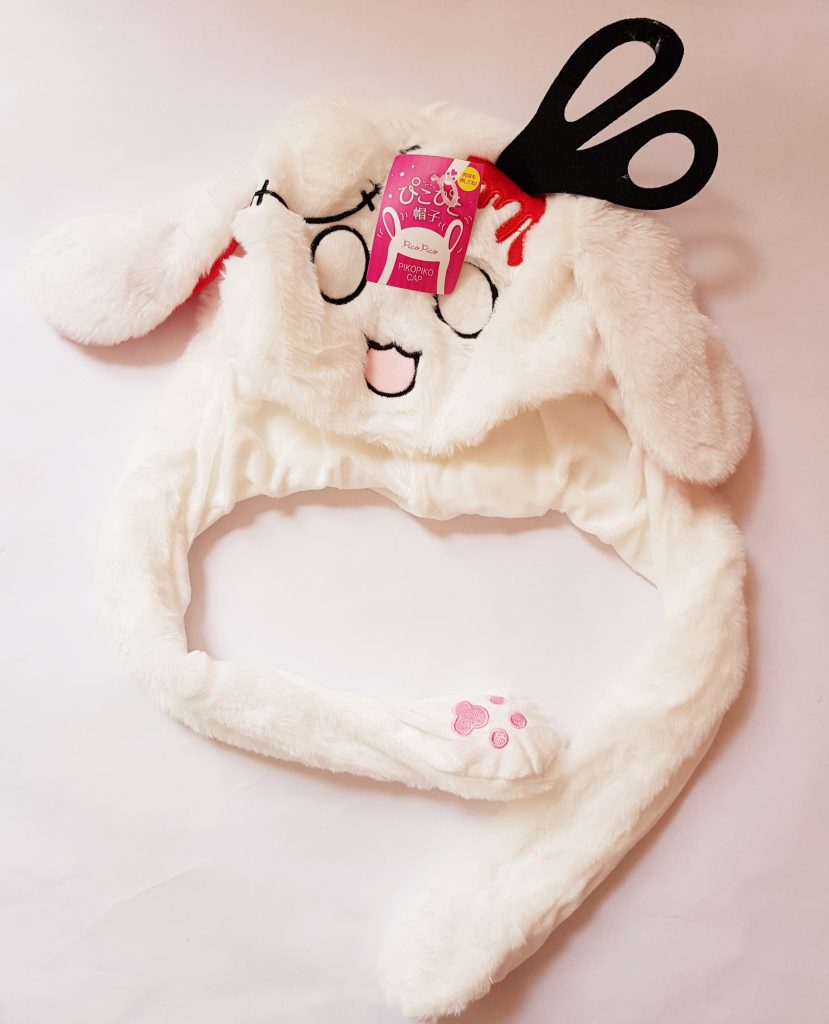 This is one of a wide variety of Sanrio & Ghoulish Trio Animated Long Hats. Animated Long Hats are a very popular novelty hat, as the long paws contain bulbs that when squeezed, make the ears shoot up in the air! 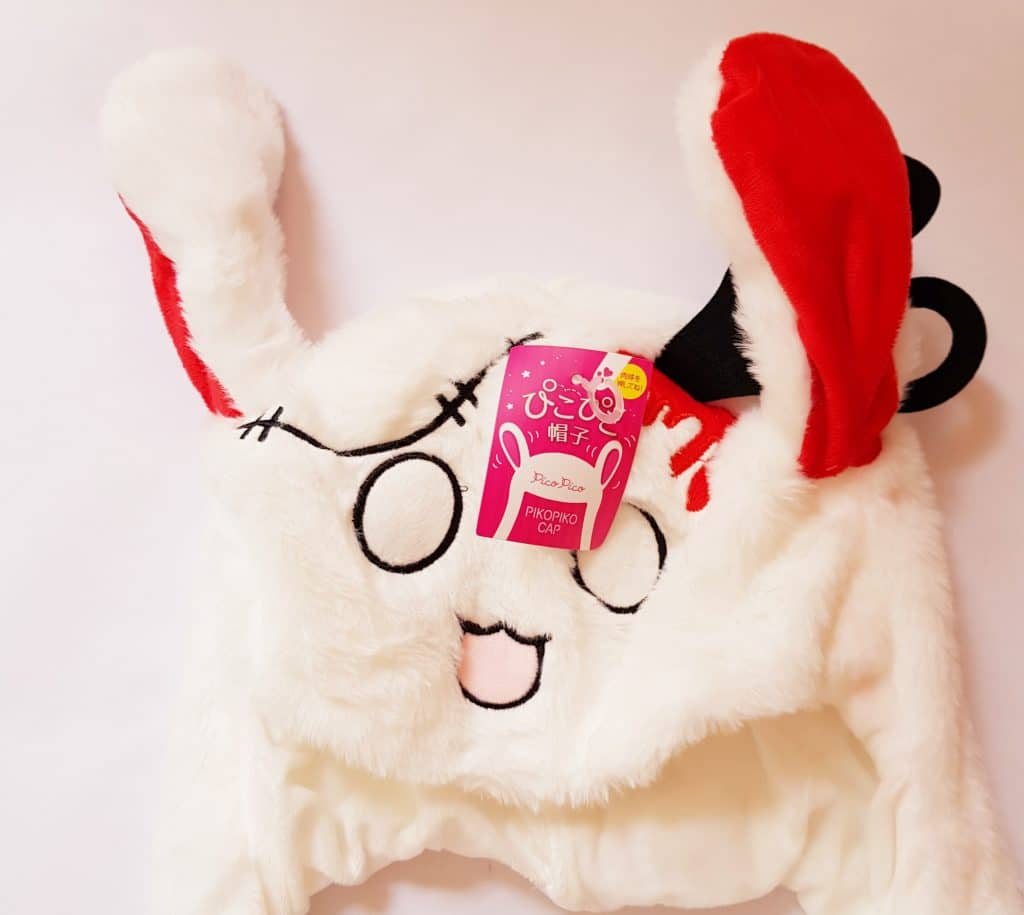 My versino is a particularly gruesome one, with a pair of scissors in the head, scars, and bright red ears! It’s actually a lot of fun, and it looks very funny when the ears shoot up. and of course there’s the bonus pf keeping your head warm on chilly autumn nights. This one is from the Ghoulish Trio, though some other possibilities are various Sanrio characters. 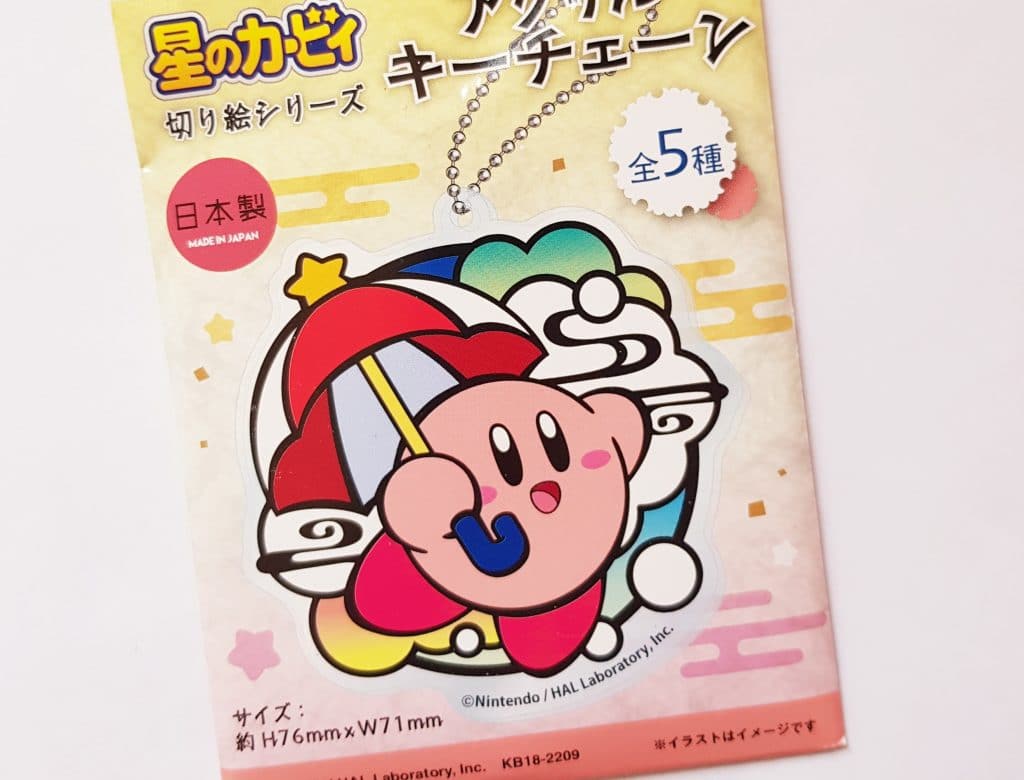 Finally, a Nintendo ‘Kirie’ Keychain. This keychain features Kirby in one of several costumes, or one of three Pokemon characters, costumed in honour of Halloween. The style of these designs is meant to resemble ‘kirie’, which is a traditional Japanese method of papercutting art. It’s a very striking effect, and a nice combination of the old and new.

There are certainly some fun and spooky items this month! I think the devil plushie is fantastic, and I love having an exclusive design. The chocolate egg is also cute, and it's always fun to find a little prize inside with such a great variety of characters. The one thing I like less is the hat. Not in principle, I think these hats are a lot of fun, but I'm disappointed that I didn't get a Sanrio character. Sanrio items are premium, whereas the others feel a little second rate, and while I don't mind having a range of different possibilities, I think they should all be from a premium brand. I absolutely love the bath bomb, not only is it fun but I love the bath combs that contain prizes! I hope they include more like this, as I think they are a real treat. All together a pretty good selection, and while I don't love everything, the Halloween vibe is pretty strong.