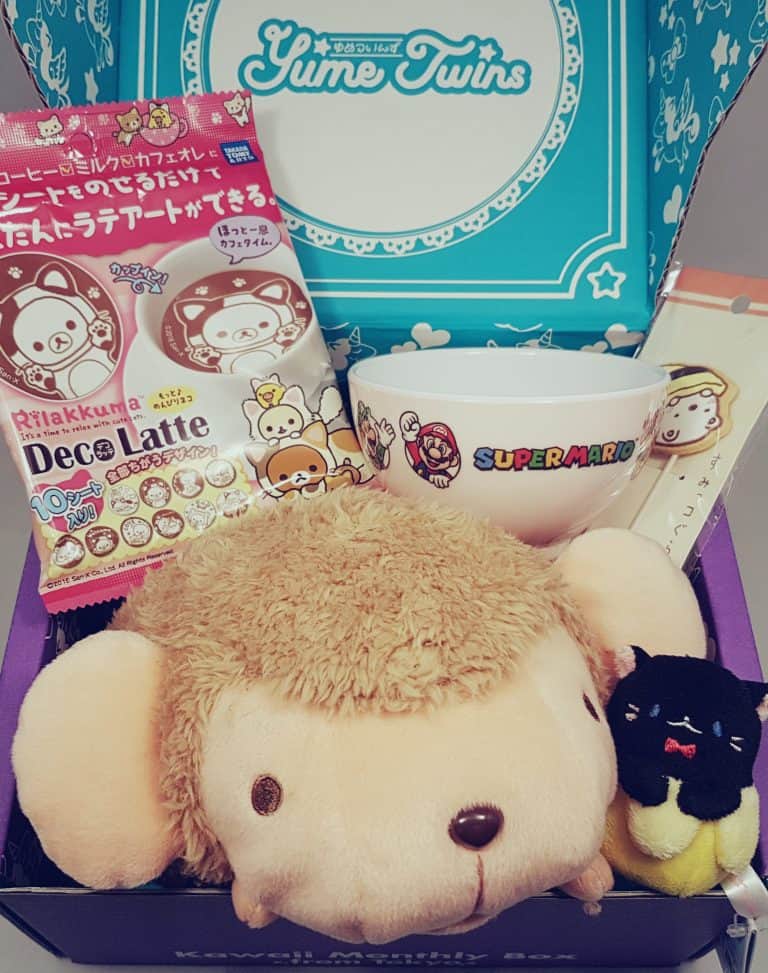 At the beginning of this year YumeTwins revamped their line, and now offer in each box five kawaii items including plushies and lifestyle goods plus premium anime brands.

YumeTwins is a year old this month, and there is a lovely array of goodies to celebrate! 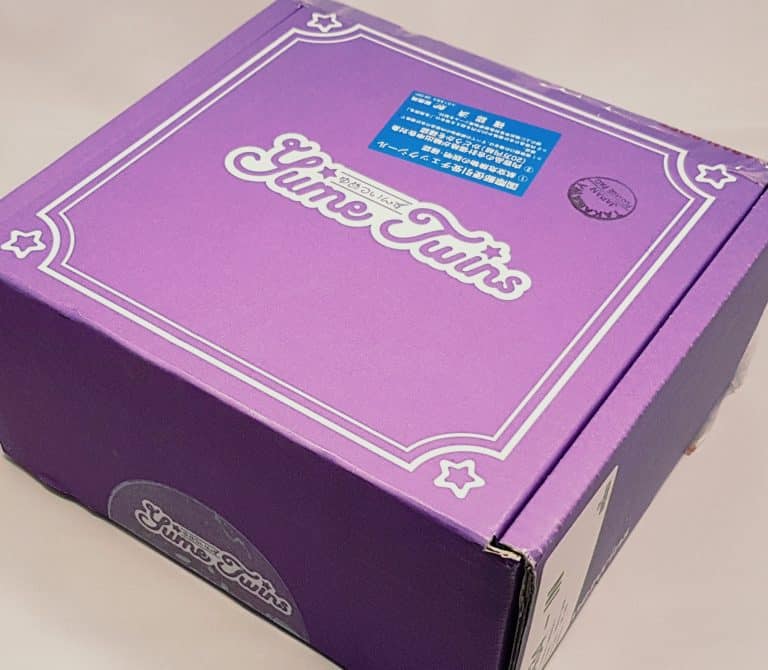 Their shipping box is so nice. I love the colour, and it’s incredibly sturdy. 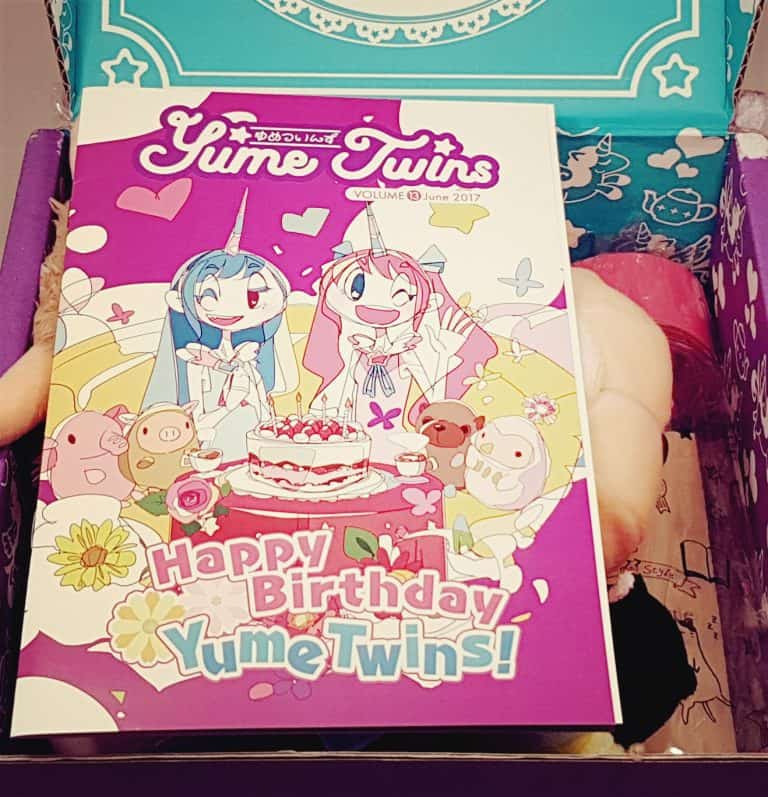 On top is their menu magazine. The design is delightful, lovely and colourful, and I love spotting the different characters on the cover! 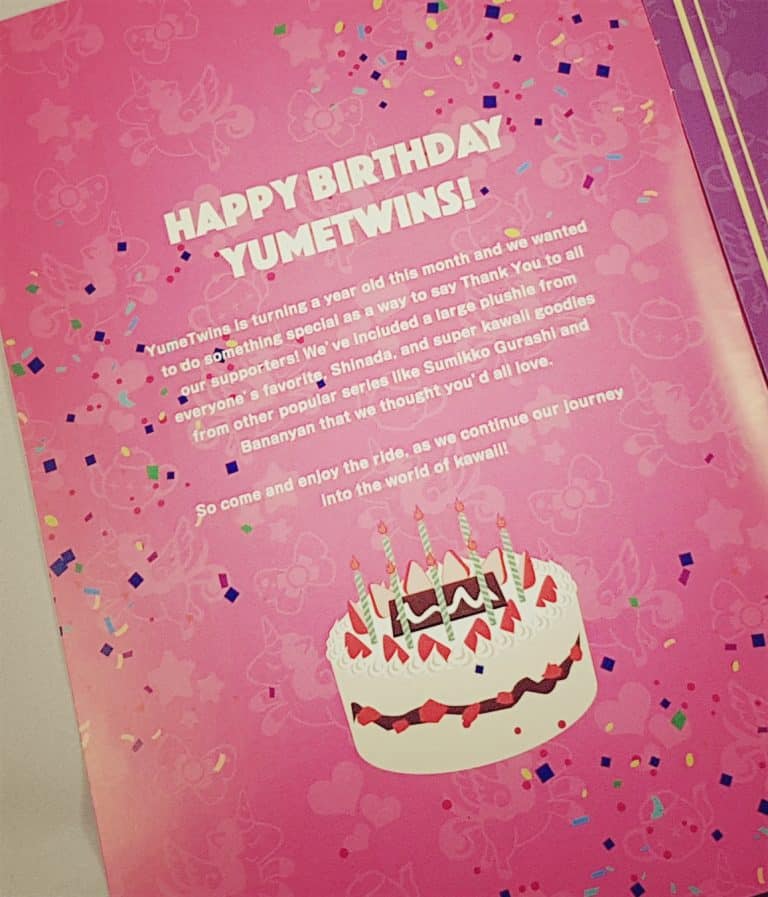 There’s a nice description list of the box contents. 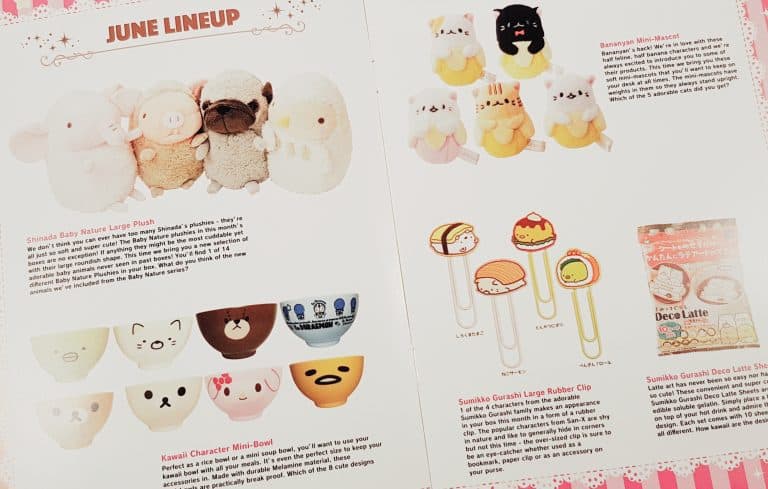 I never look at it until afterwards, though, because I like to be surprised as I’m unpacking!

There was also an insert with the menu this month: 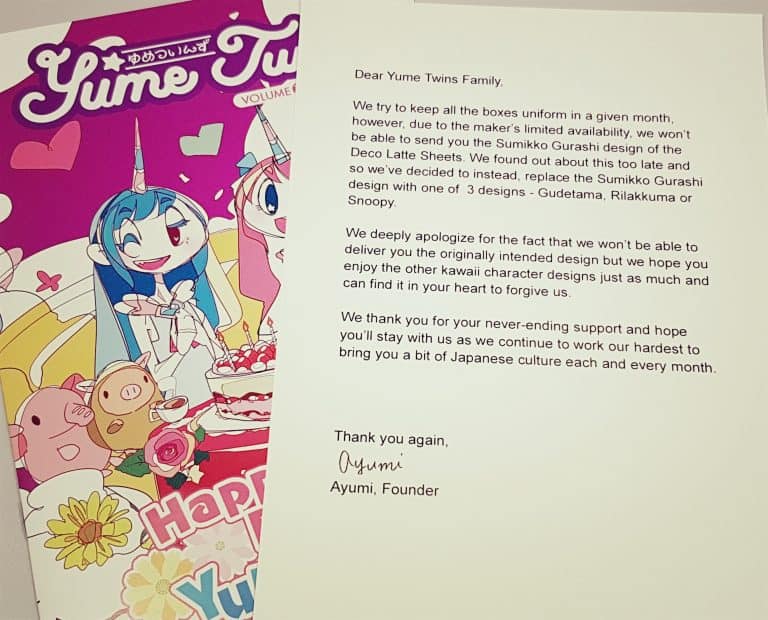 Sometimes this happens with subscription boxes. I don’t think it’s a problem because as a rule the substitute item is always as good as the original. 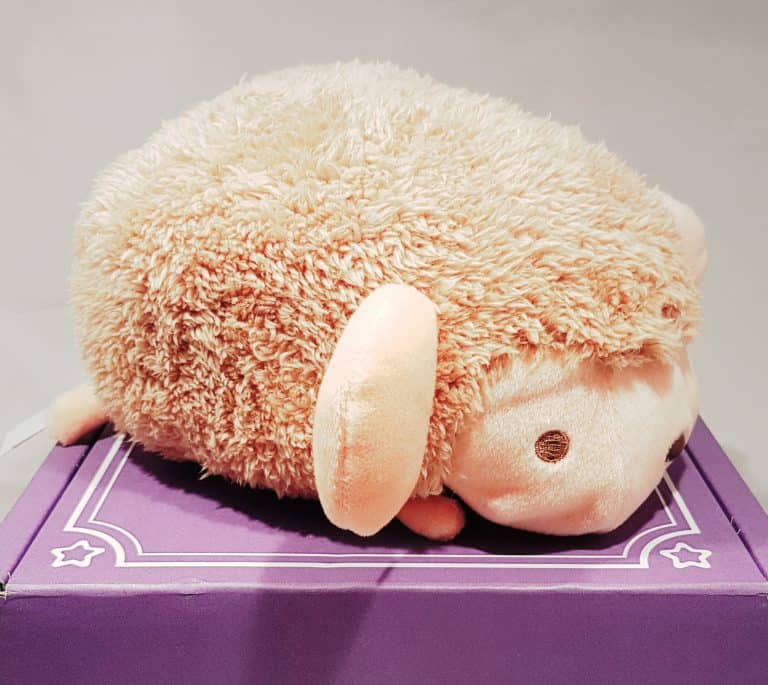 Squee! This guy had to come out first as he was taking up an awful lot of space in there!

This is a Shinada Baby Nature Large Plush. The Baby Nature range is so gorgeous. The April YumeTwins box contained a smaller adorable plushie from this range, and this guy much bigger and even squishier. 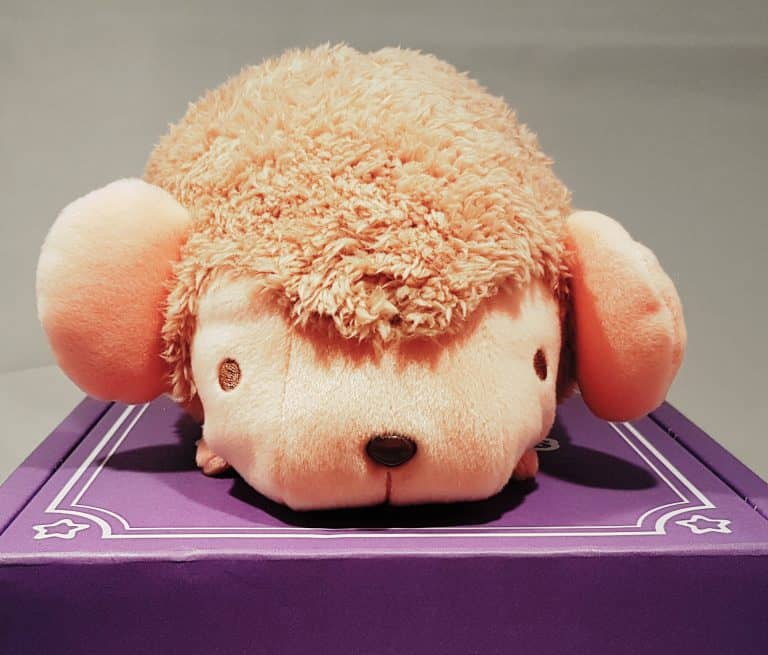 This is a monkey (named ‘Sqishtyfluff Swings’ by my daughter), one of a possible 14 options! He is gloriously soft and squeezable. 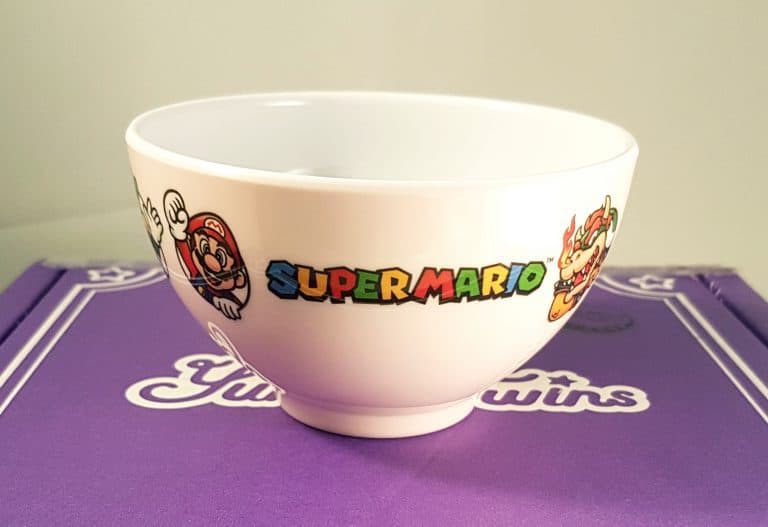 Next up is a Kawaii Character Mini-Bowl. The menu lists eight possible designs, but this cool Mario bowl doesn’t actually appear on the list! 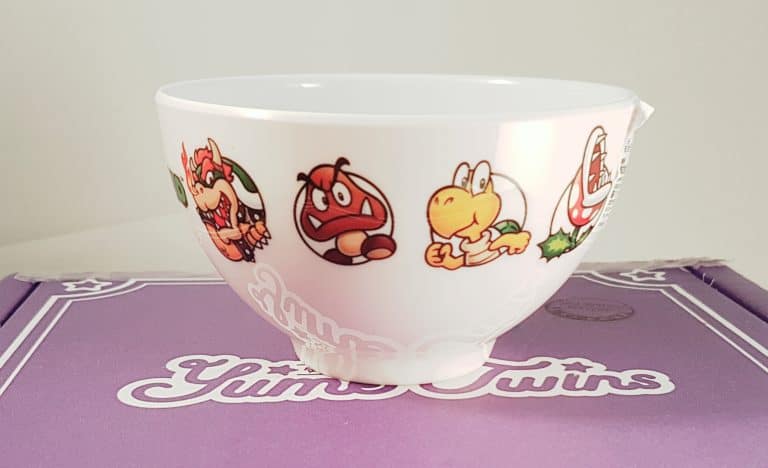 It doesn’t matter in the slightest, because we love Mario in our house (we even have a SNES!) and all the characters totally count as kawaii. 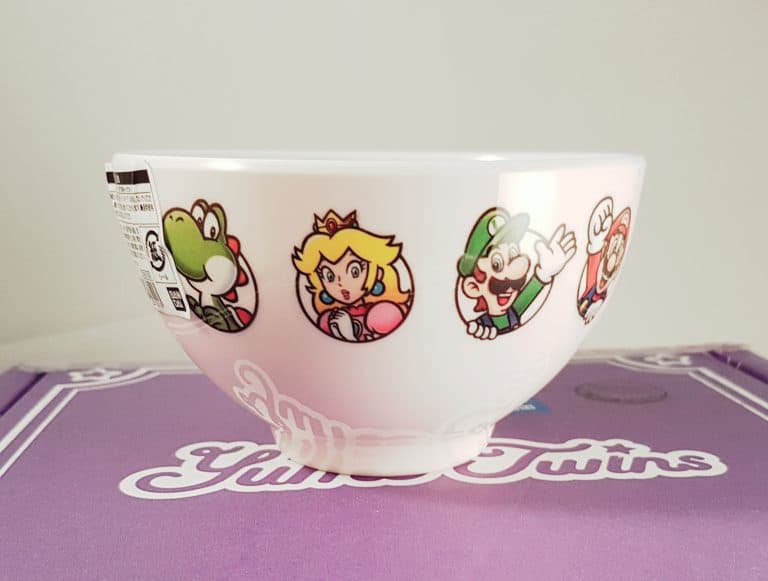 It’s not particularly big, but it’s made of good thick melamine and makes an excellent snack or ice cream bowl! 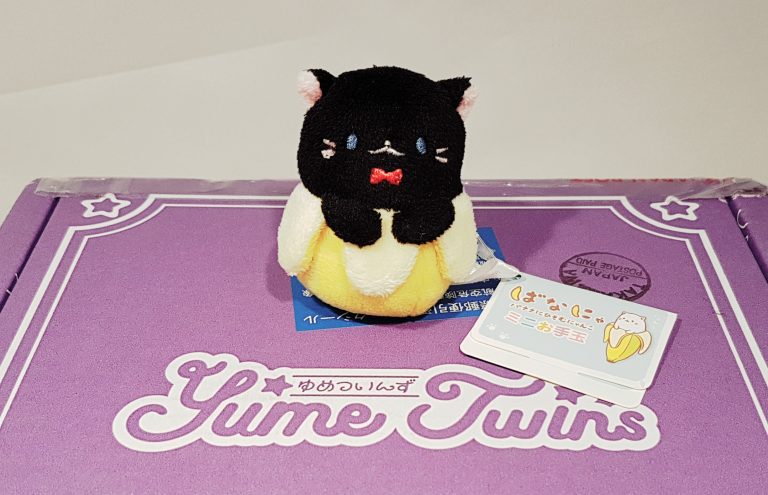 This Bananyan Mini-Mascot is little drop of mini-cute. The character is half cat, half banana, a combination which could only exist in kawaii culture. He has little beads in his base so he stands upright. There were five possibles on the menu, but I’m really pleased I got the black version because it contrasts so well with his little yellow banana bottom half! 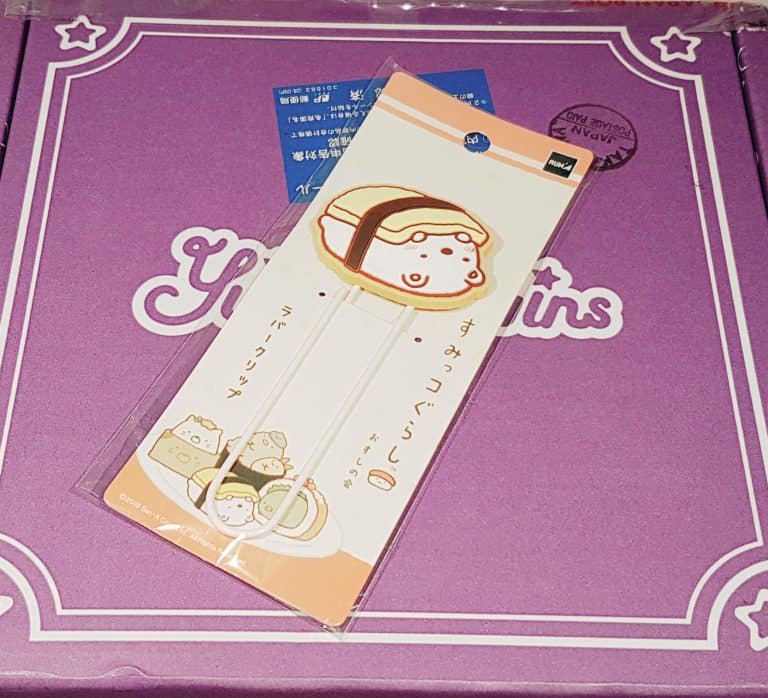 (Sorry about the slightly overexposed picture!)

This is one of these things which is both cute and practical. It’s a Sumikko Gurashi Large Paper Clip. It would also work very well as a bookmark.

There was one of four possible characters, all dressed up like sushi. My little guy is Shirokuma the polar bear.

Finally, this is the substitution item. 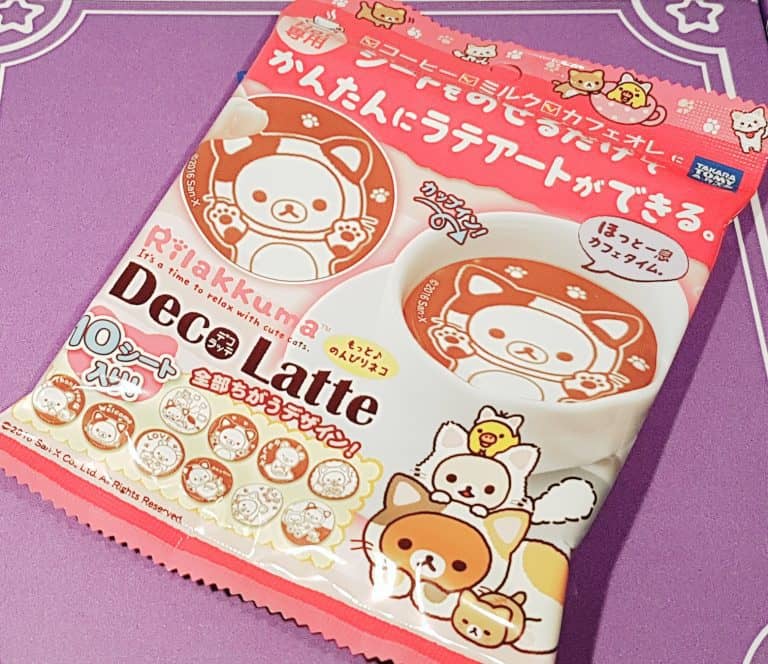 These are Rilakkuma Deco Latte Sheets.

I must confess I was slightly disappointed to get these rather than the Snoopy or Gudetama version, because I adore those characters. But these are still cute!

At first I was slightly confused, thinking it was one of those templates for creating coffee art. However they are actually a kind of super thin wafer sheet that you float on the top of a hot drink. So if you’re not one of these ridiculously skilled baristas who can make art with coffee foam, you can cheat like this!

Even though I didn’t get a favorite character I still like them, and Rilakkuma is incredibly cute.

They are edible and tasteless, and are basically a way to make your morning coffee more fun!

So here are my thoughts.

While there is nothing specifically birthday-ish about this month’s box, it’s once again a great selection. I love plushies (I have to fight my daughter for them!) and the big monkey is a real hit.

I love we’re gradually increasing our stash of character melamine crockery (including the gorgeous Gudetama cup in April’s box), and the bowl will be very useful. And it’s difficult to break, which is very important with a child around!

The mascot is small and cute and pleasingly ridiculous (I mean really, a cat/banana?!)

I like having non-boring stationary. I read a lot, and there are always tons of papers waiting to be filed, so the paper clip will come in handy, even if only to create the illusion of organization!

As for the latte deco sheets, this is a really cool idea, and I haven’t been able to find anything similar on a UK site, so they’re properly unique to Japan.

On to value. Because these items come directly from Japan and are effectively unavailable outside Asia I’m not going to do a detailed breakdown. I doubt you’d get much change from £20 if you bought a bowl, mini plushie, and big plushie. Throw in the clip and the latte sheets and you’d be plenty over the cost of the box.

I can’t find any of these items from any UK sellers at all (I don’t count eBay) so they’re not something you’re going to see everywhere! It’s fantastic to know you are getting things which are really sourced direct from Japan.

And the best thing about this lovely box is the amazing cuddle it includes! 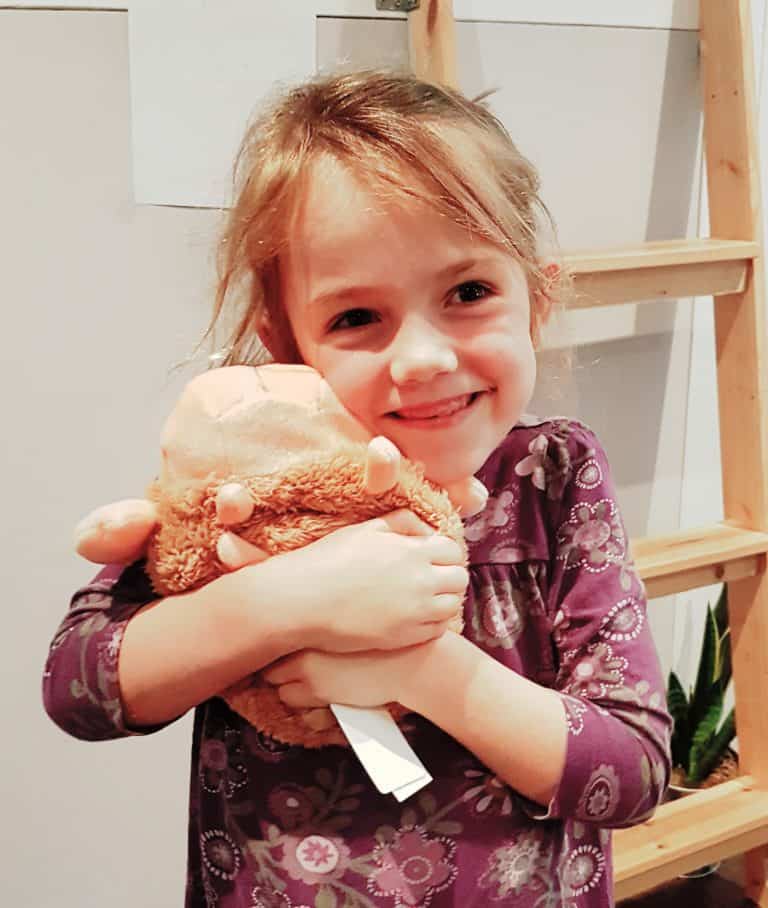