Reviewed by Imogen on 25th February 2017 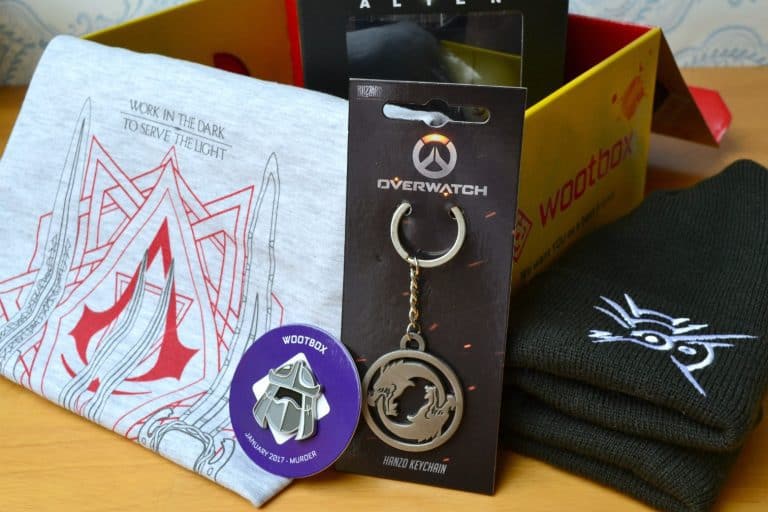 This was the best theme word of a geek subscription box ever. Just straight up- Murder. All I could think of was that scene from The Office; “R is among the most menacing of sounds. That’s why they call it Murder, not Mukduk” and I couldn’t wait to see what Wootbox had packed up for me. Although, the box had me thinking of old school horror movies, so the contents were a little at odds with that… 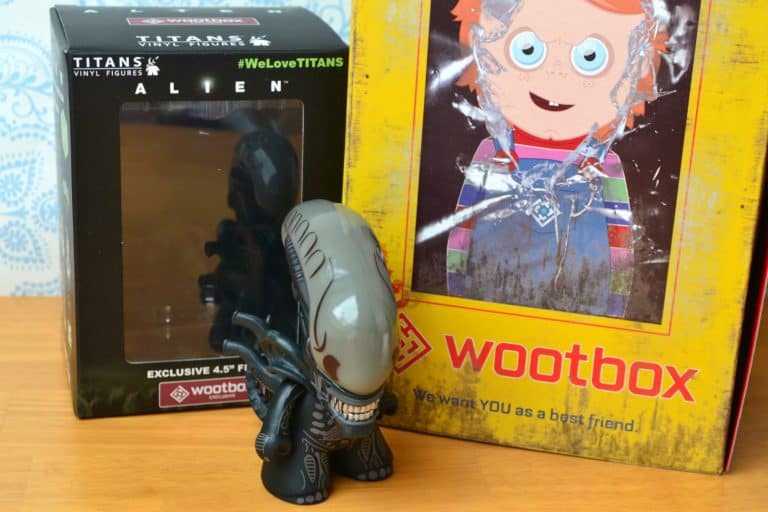 The first thing I picked out of this months box was this- really quite adorable Alien figure from Titans Vinyl Figures! He does murder a lot of people I guess. It’s a Wootbox exclusive which is always nice, they have a lot of exclusives compared to other boxes I’ve had in the past. Aliens head moves around a little, and his backpack-type thing is loose to allow for this. Overall, it’s not the best made figure I’ve seen but anything that makes Alien less terrifying is a win for me. Look at that lil’ grin! 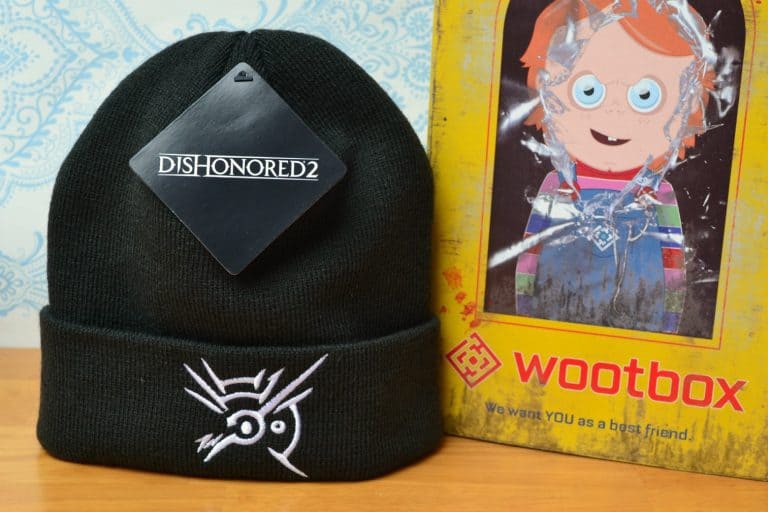 This Dishonored 2 beanie is probably my favourite item in this months box. I’ve never been much of a beanie person in the past but consider me converted. It ended up looking super cute while keeping me toasty warm during Storm Doris. The Outsider symbol is understated and well embroidered, and the fabric is thick but doesn’t muss up my hair too badly. I just love it! And you can murder in Dishonored if that’s the path you chose. 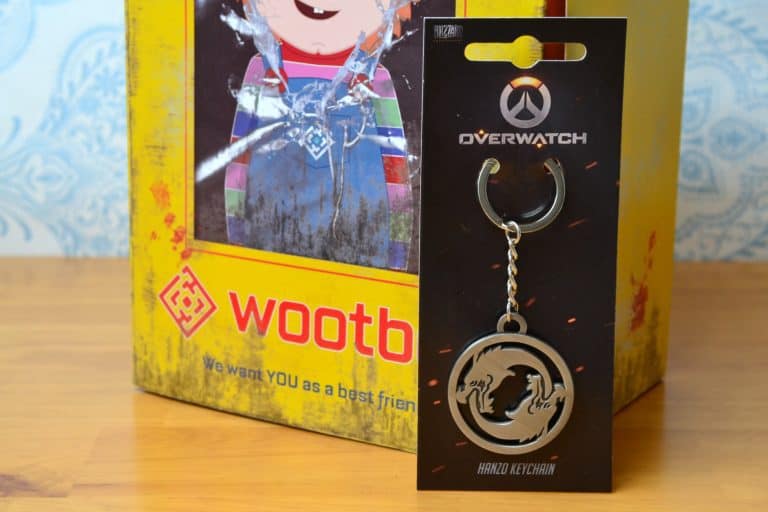 Hanzo is my favourite Overwatch character from the little I’ve watched of gameplay and this keychain of his move ‘Dragonstrike’ is so awesome. It’s a pretty cool design even without the meaning behind it. However, knowing that Dragonstrike brings out a Spirit Dragon that devours any enemies it encounters in front of it? Who doesn’t want that hanging on their keys? 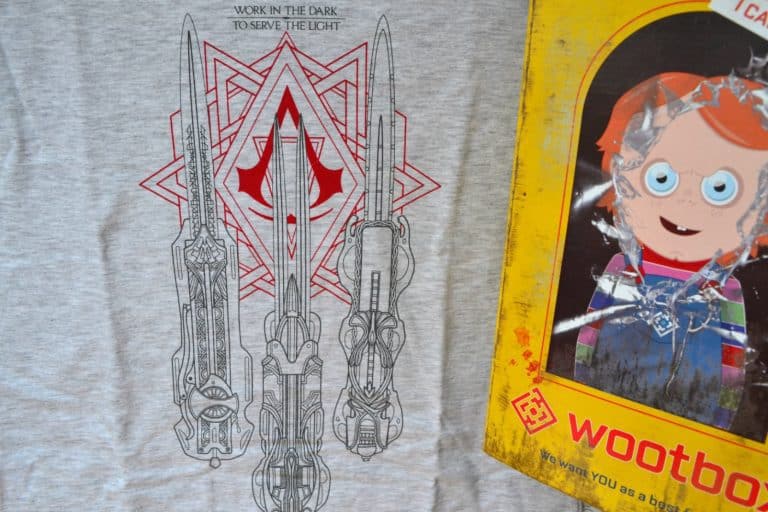 The teeshirt of the month was this Wootbox exclusive official Assassin’s Creed shirt! Just like last months Wootbox, they did a really nice quality job, blending the design into the soft heather grey shirt. Putting the logo in in red at the back, and the three hidden blades in grey in front looks super awesome. I’m all for a great design. 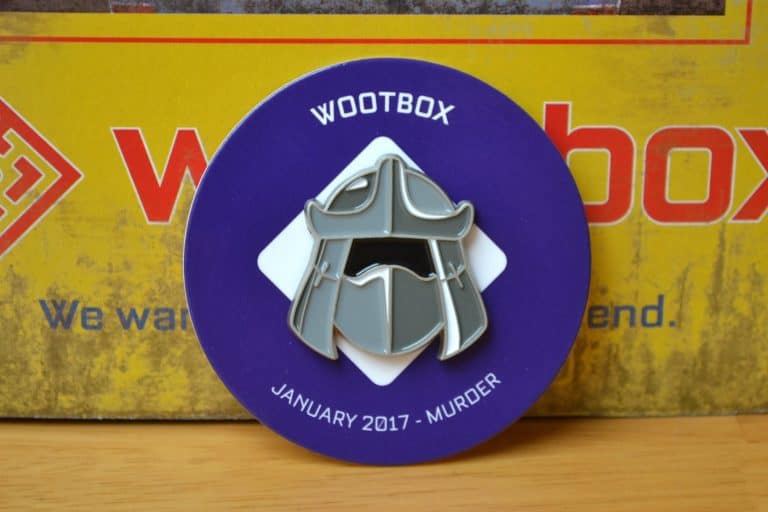 And, last but not least, the Wootbox pin badge of the month! I guess the Teenage Mutant Ninja Turtles did kill Shredder in the original movies. Plus, Shredder killed people so he could count as a representative for murder. But his mask wouldn’t have been my first choice… If we’re going for murder masks: Ghost face! Hannibal! Jason! All would’ve said Murder a little more to me.

This box didn't feel like it filled the theme as well as last months Star Wars box did. Murder is a pretty human-human crime. 'Assassins' or 'Killers' might have worked better. However, that's a pretty nit-picky complaint. I liked this box!