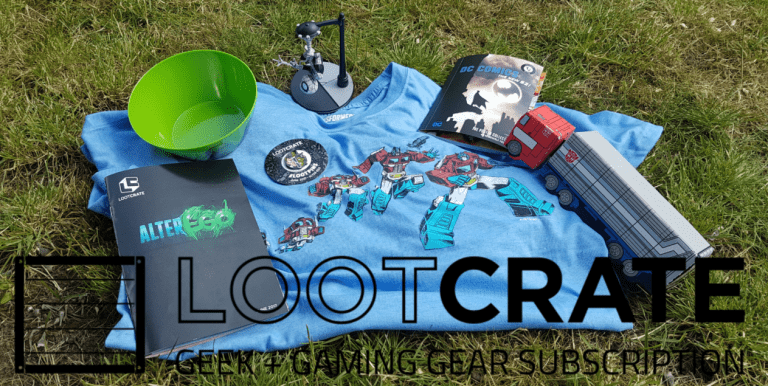 This month’s theme from LootCrate is Alter Egos, featuring some of the most famous dual characters in the geekverse.

A note on the pictures: it was such an insanely hot day the house was stifling, so I decided to head to the garden to open the box and take some pictures of the goodies inside. 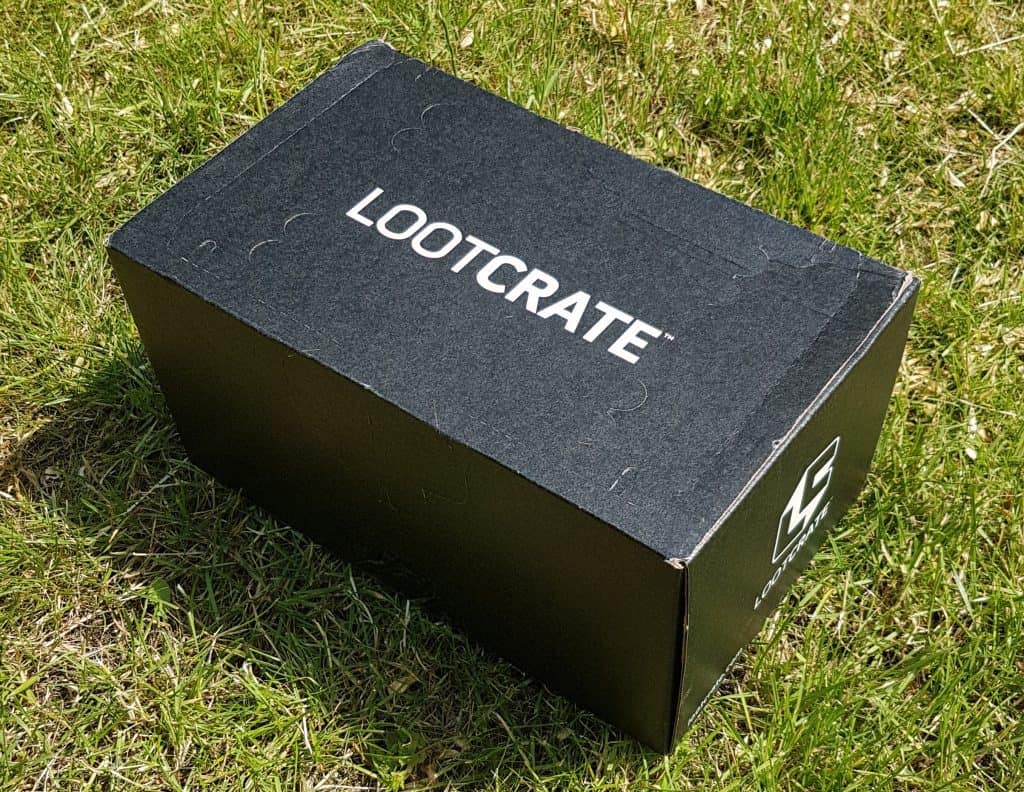 LootCrate always uses a very sturdy box.. Recently their box transformations have been more complex. You can just see the perforations on the top and sides. More on that later… 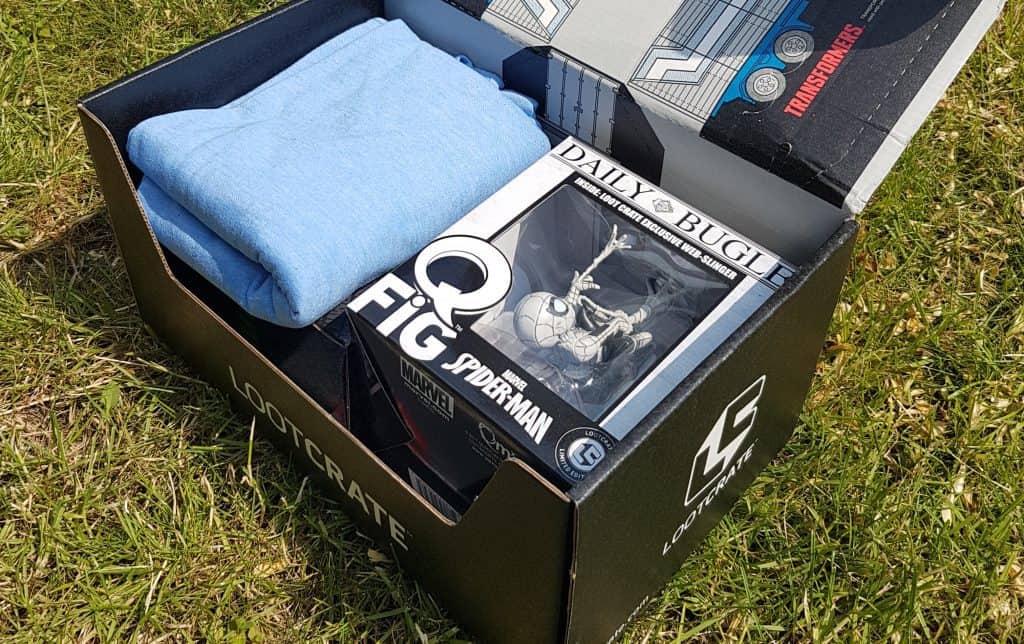 I see the beautifully folded t-shirt, and a Q-Fig! 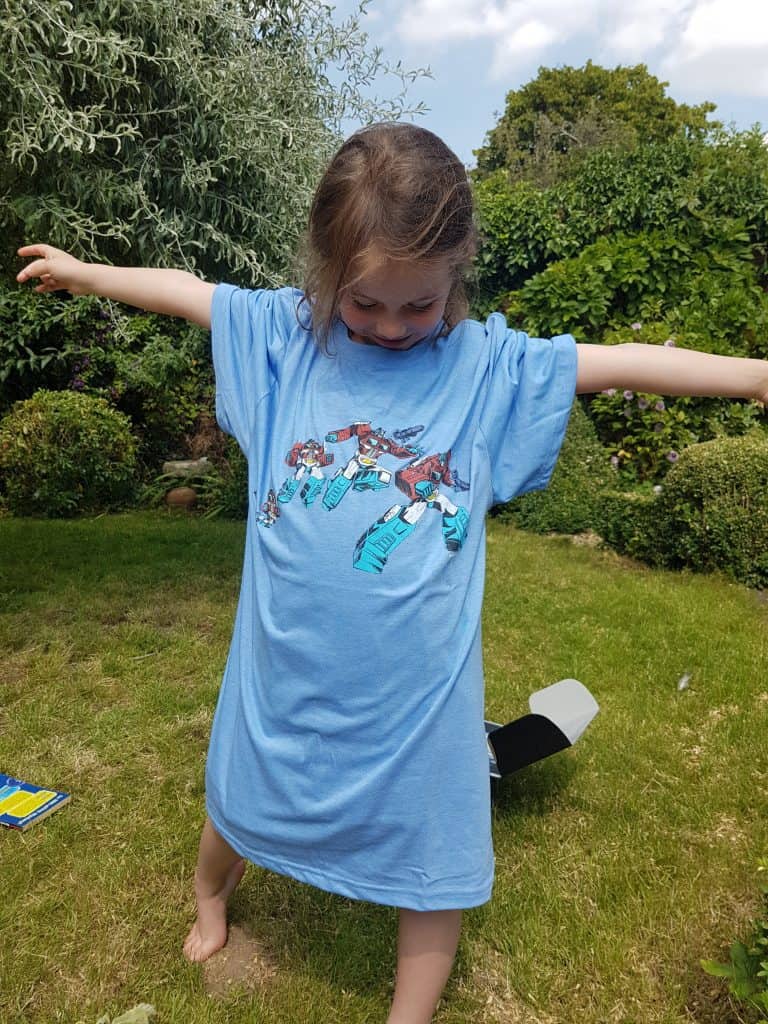 It shows the transformation process of Optimus Prime, one of the Transformers (Robots In Disguise). This is a large size; you get to pick your own size when you subscribe, but as this is a review box it seems I get a large as standard. The LootCrate t-shirts make great sleep/slub wear for me! Their print quality is lovely, though I really wish they were cotton instead of polycotton, because polycotton can get a bit hot.

My daughter adores Transformers so insisted on trying it on. Her favourite Transformer is Bumblebee, though she was pretty keen to get her hands on this shirt anyway. 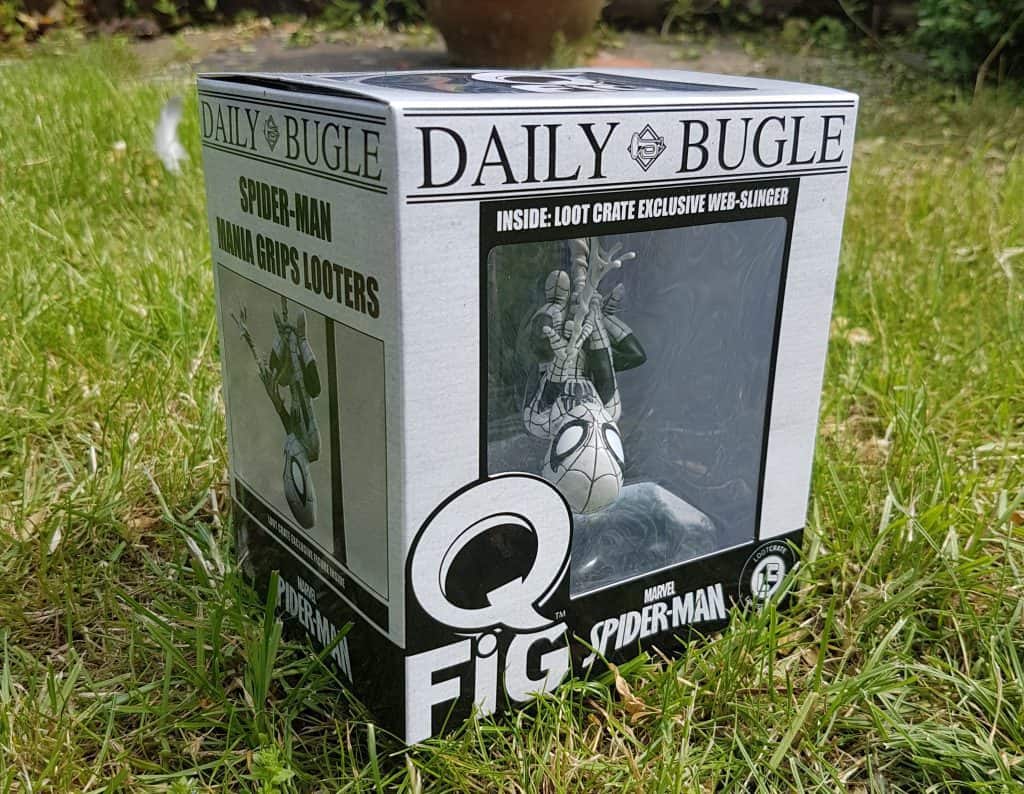 This is an awesome Q-Fig. The new Spider-Man movie is coming out very soon, so this LootCrate exclusive figure is super up-to-date. The monochrome packaging and figure is a nod to Peter Parker’s connection with The Daily Bugle, and has been specially designed to mimic one of the front pages of the newspaper itself. 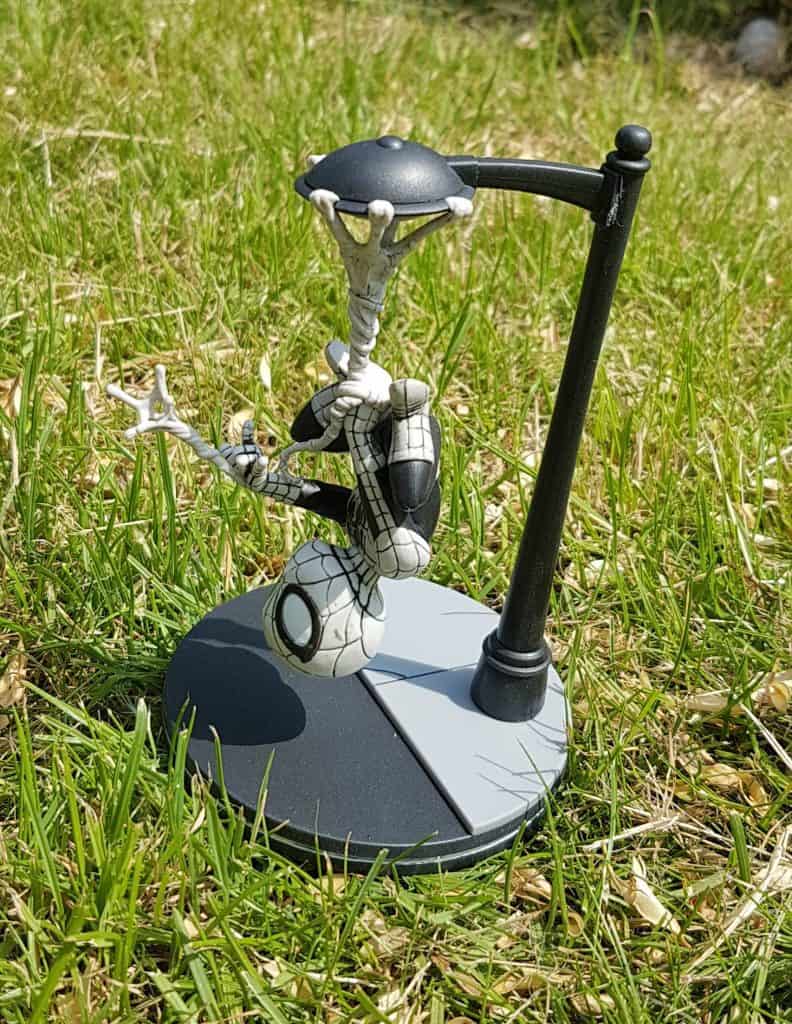 Here he is. The web is actually flexible so he swings when you bump him. Fortunately it doesn’t come off! 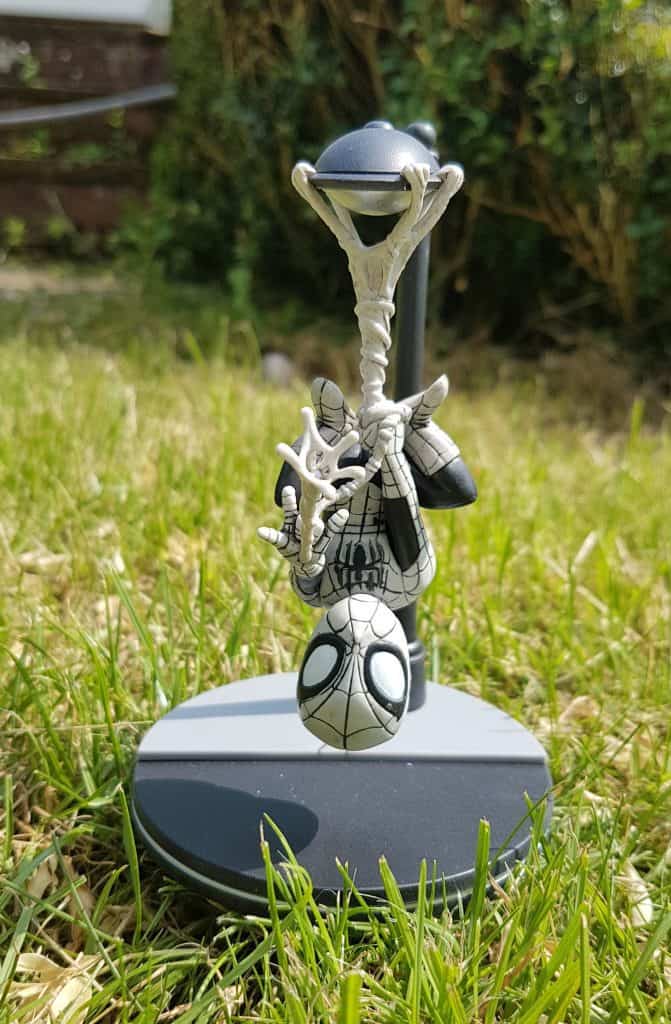 He’s so cool! I like Q-Figs much more than POP! figures, which always look the same to me, so I’m really happy with this one. 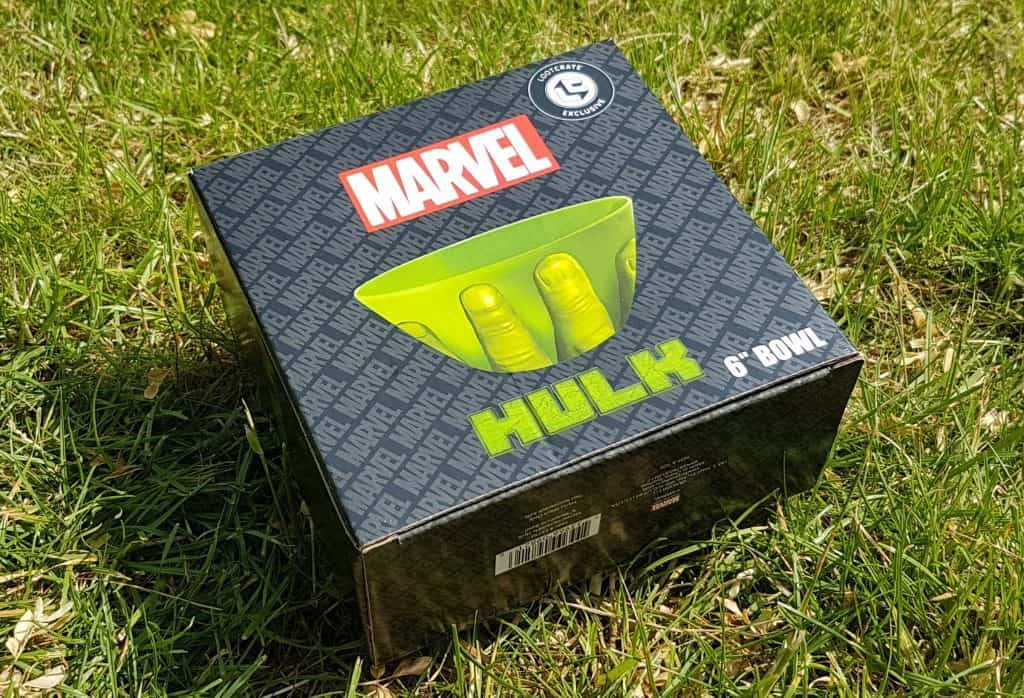 Another exclusive item, this is the perfect bowl from which Bruce Banner can eat his cereal. 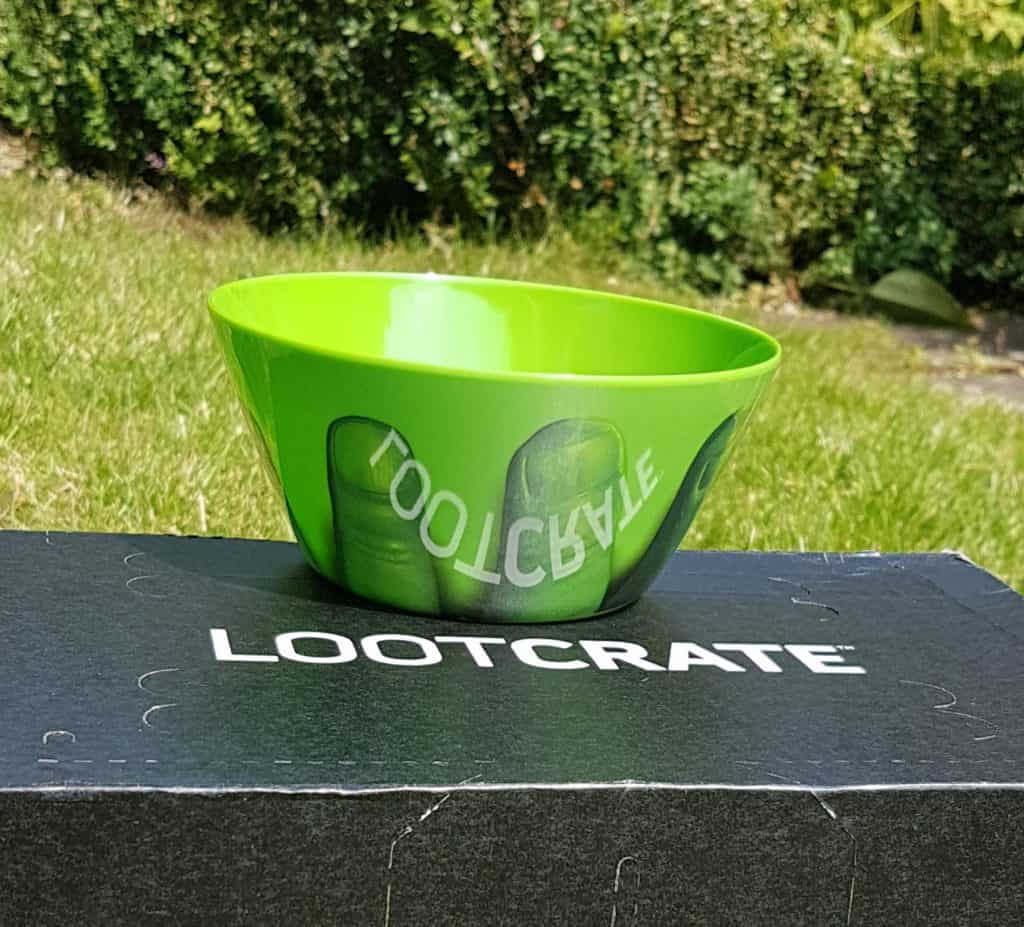 It’s actually made from plastic, so the Hulk would find it slightly more tricky to smash it. You can see a picture of his fingertips on the side (the thumb is on the other side).

(I didn’t photograph this one on the grass because green on green didn’t look great.) 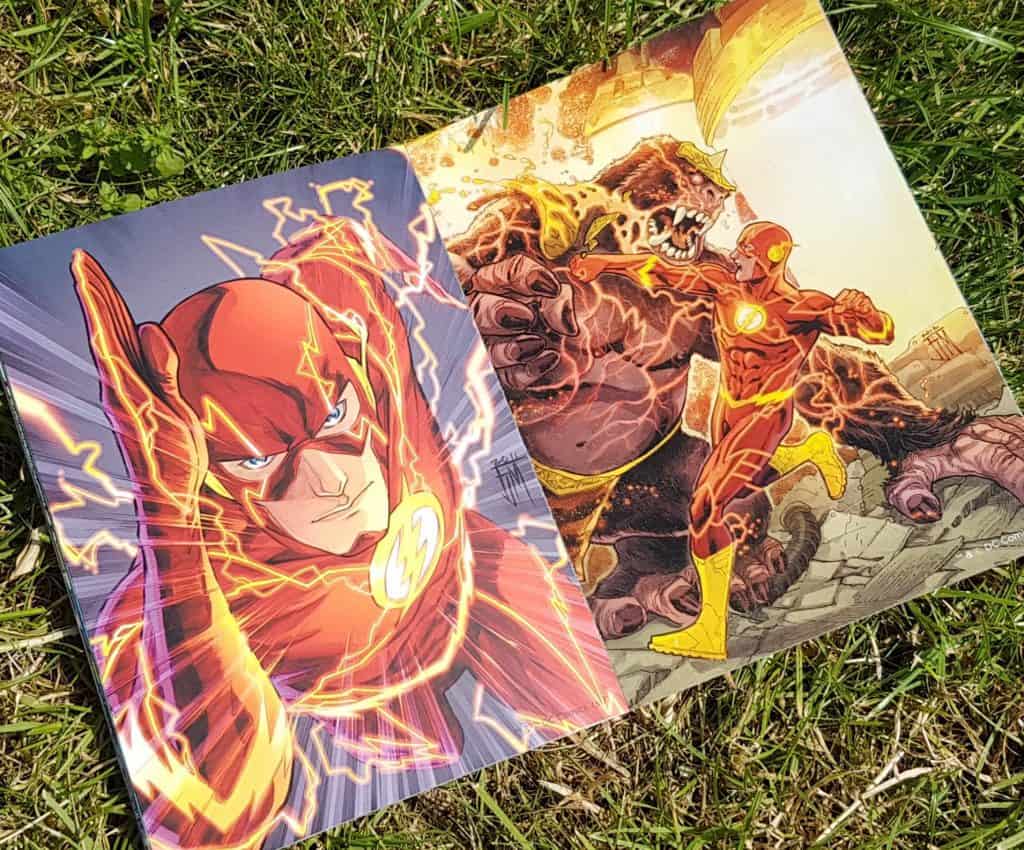 Next up is a mini-poster book, featuring the superheroes of DC. For some reason the pictures of the cover were corrupted, but here are some of the inside pages. 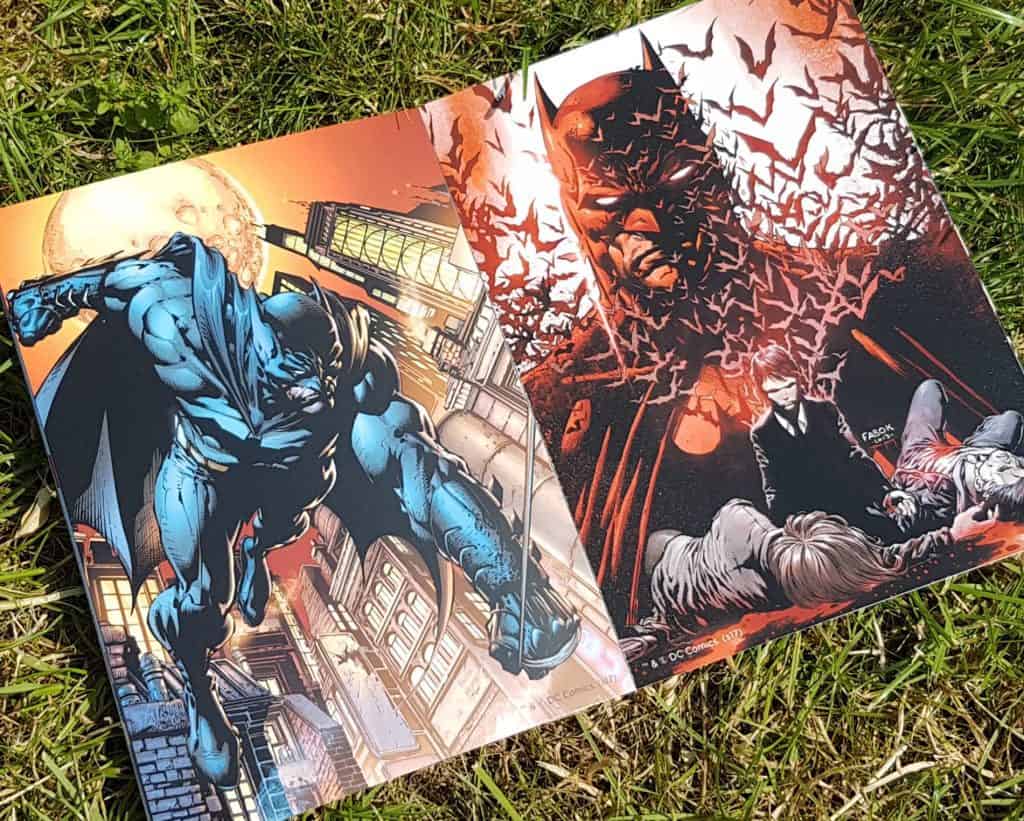 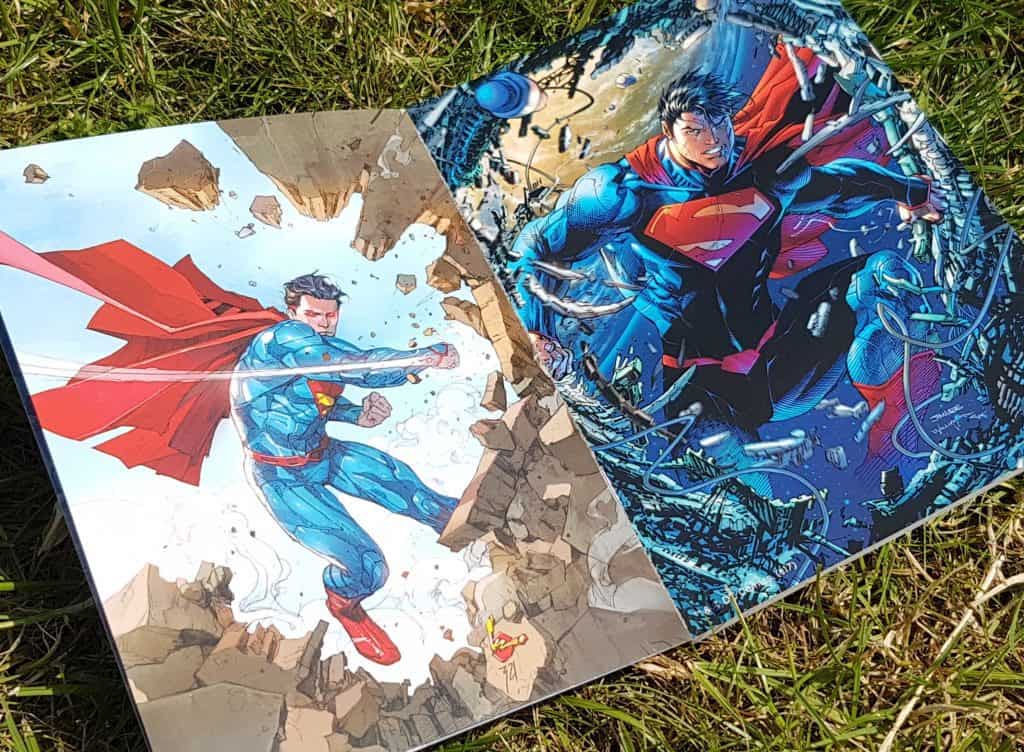 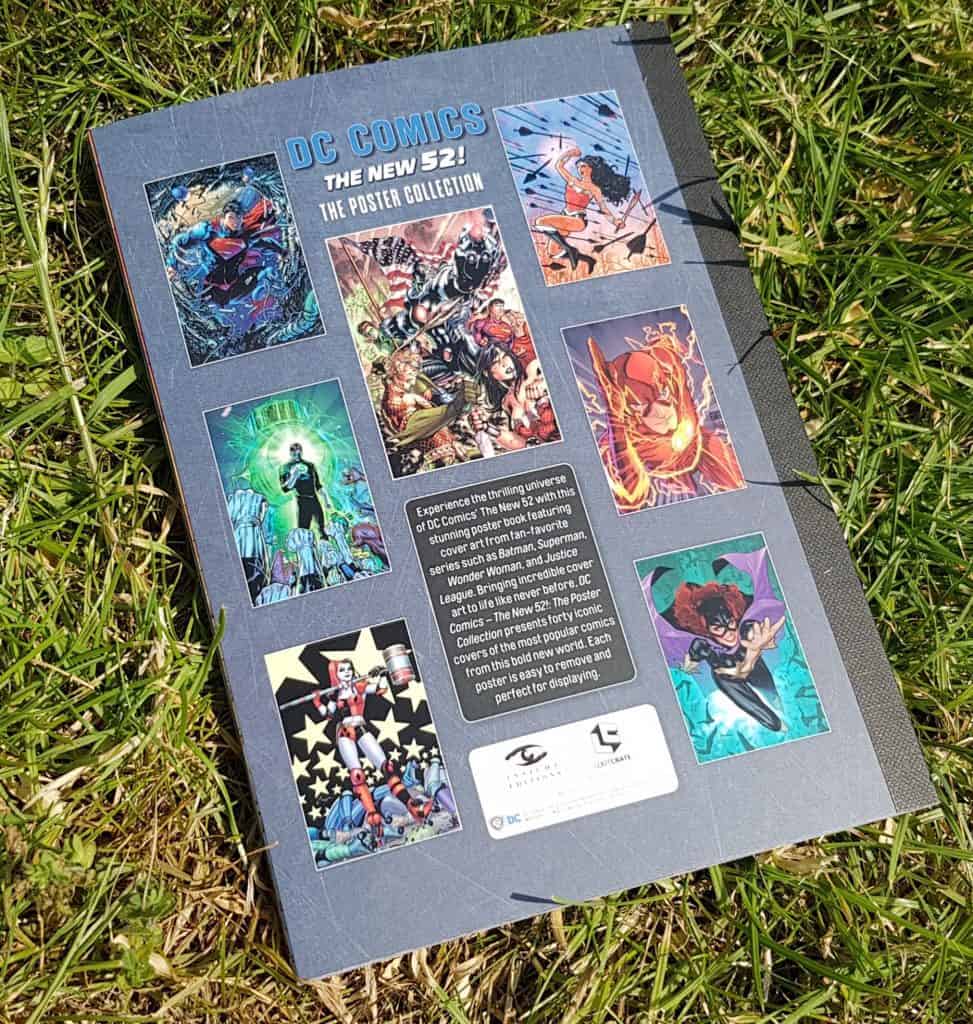 There are some nice pictures in here, though they’re all double-sided, and the book itself is very small, about A5 size. 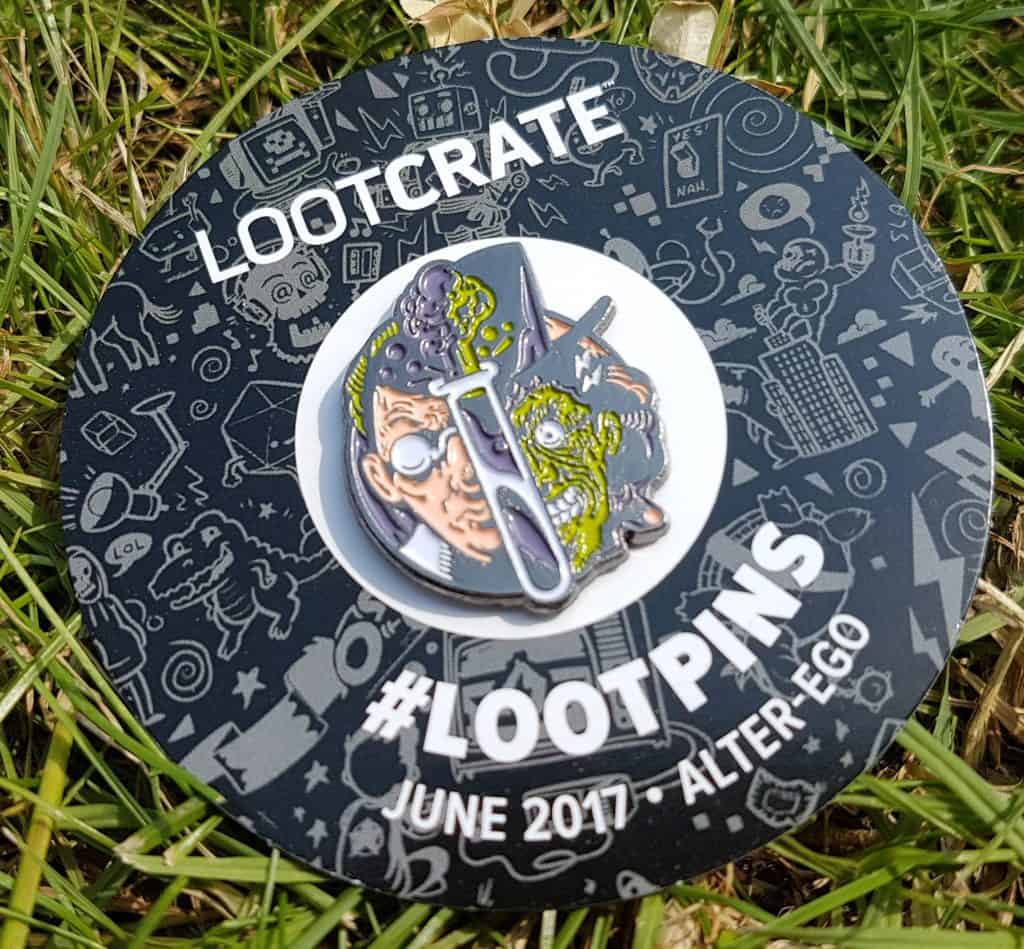 Every box contains an exclusively designed pin, which also gives you access to extra downloadable content. This remarkable design shows Jekyll and Hyde. I think this is a terrific design; I love the test tube making the dividing line.

Also in the box is their menu booklet. 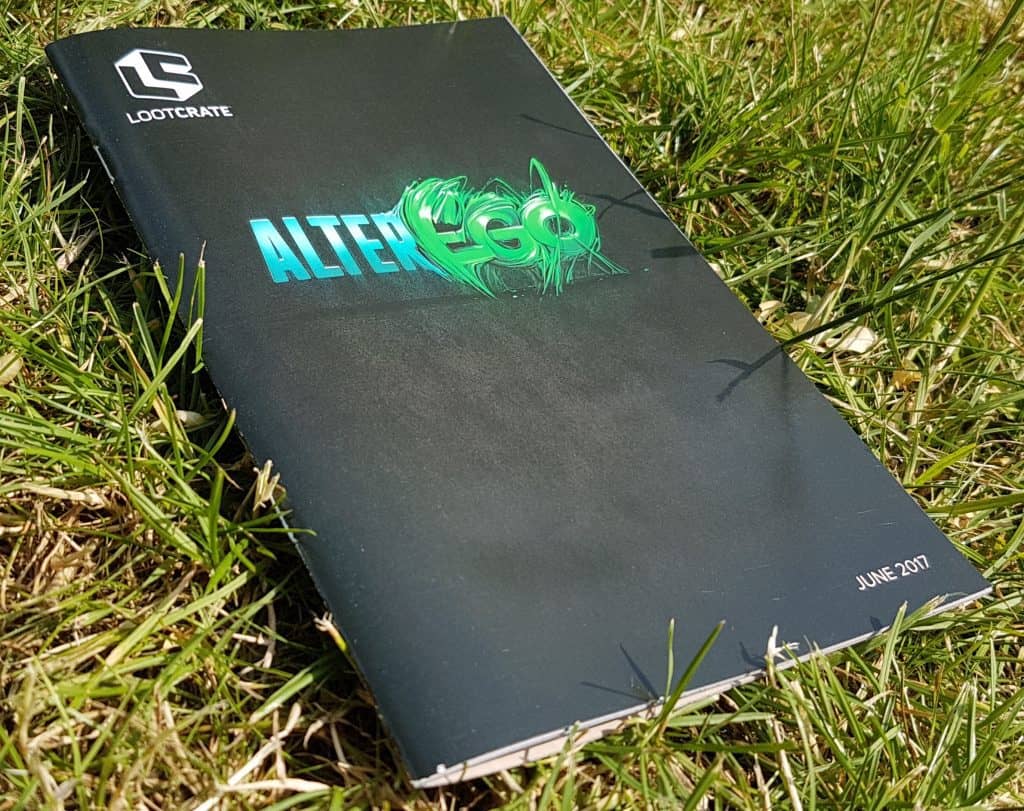 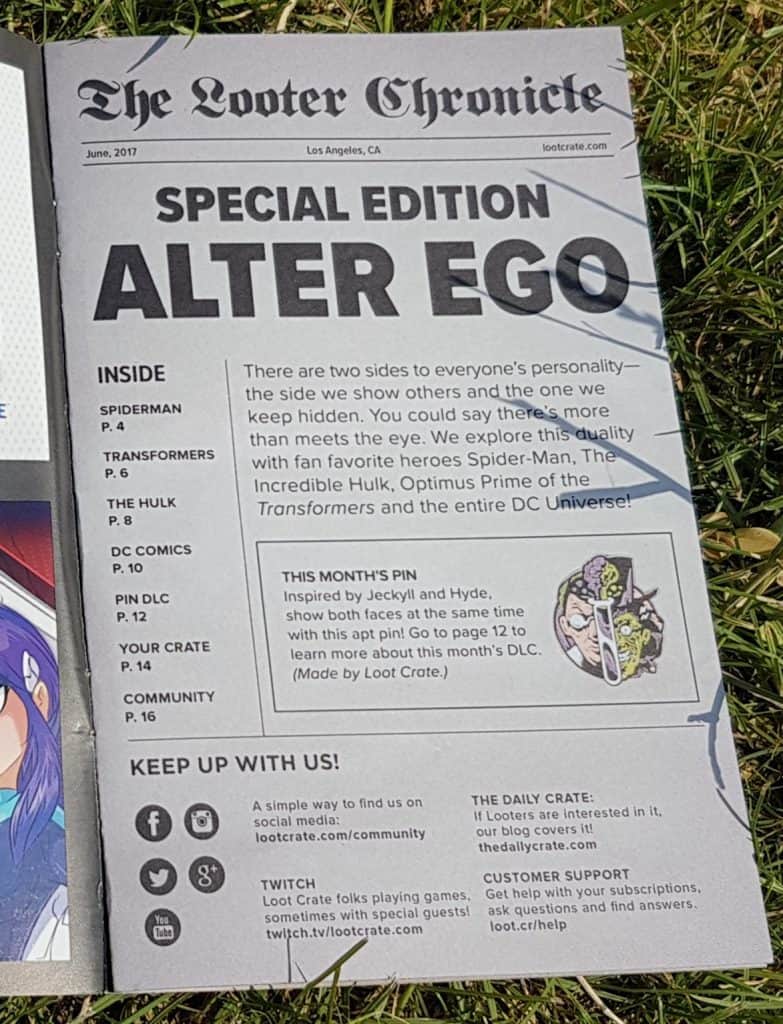 It contains information about each item in the box, as well as extra puzzles and more downloadable content to unlock and get extra loot! 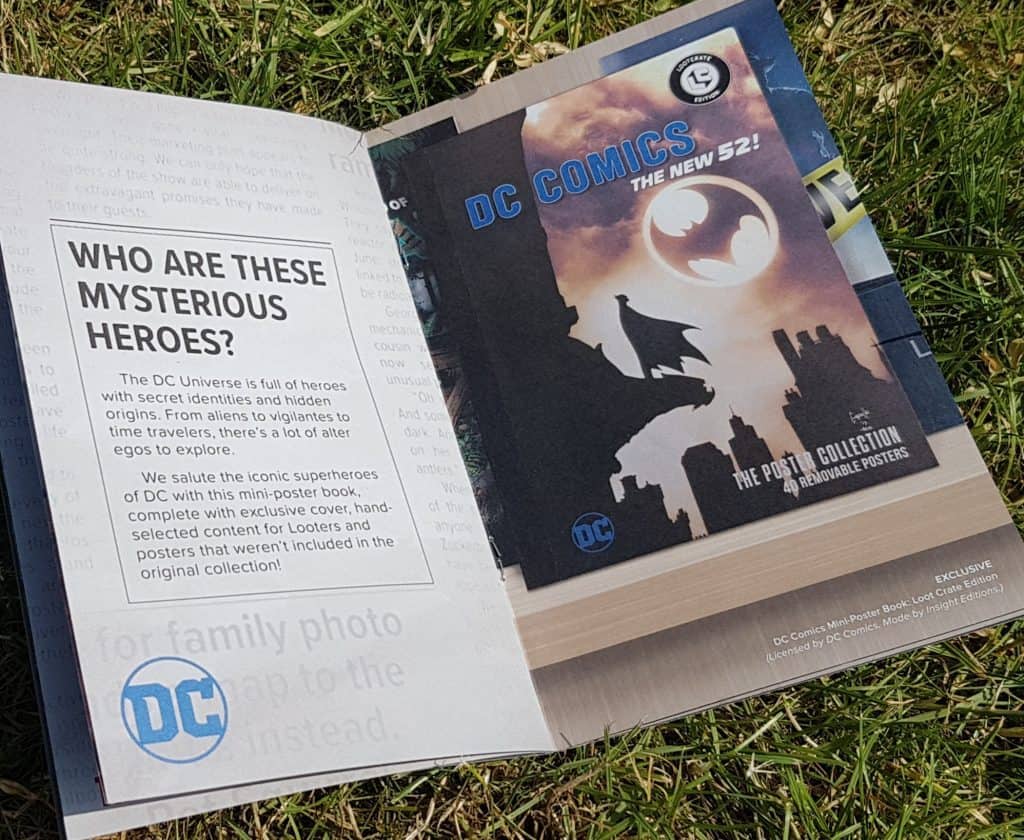 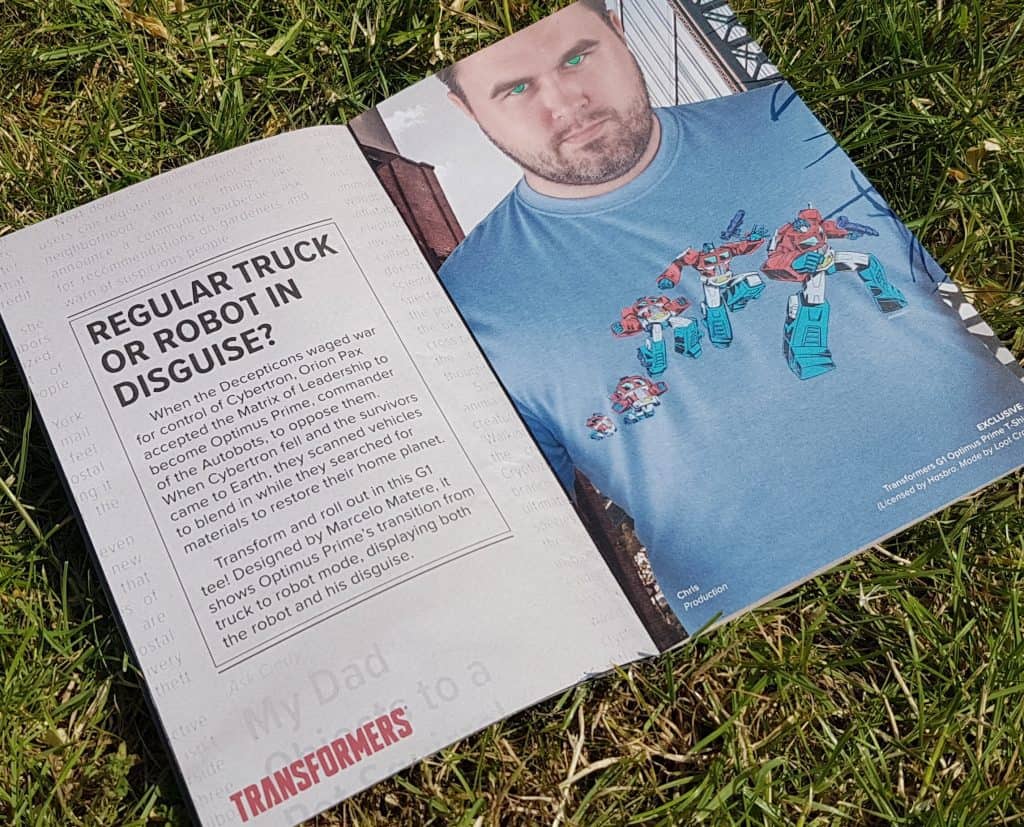 It also contains instructions for the box transformation, which this month is themed, appropriately enough, Transformers! 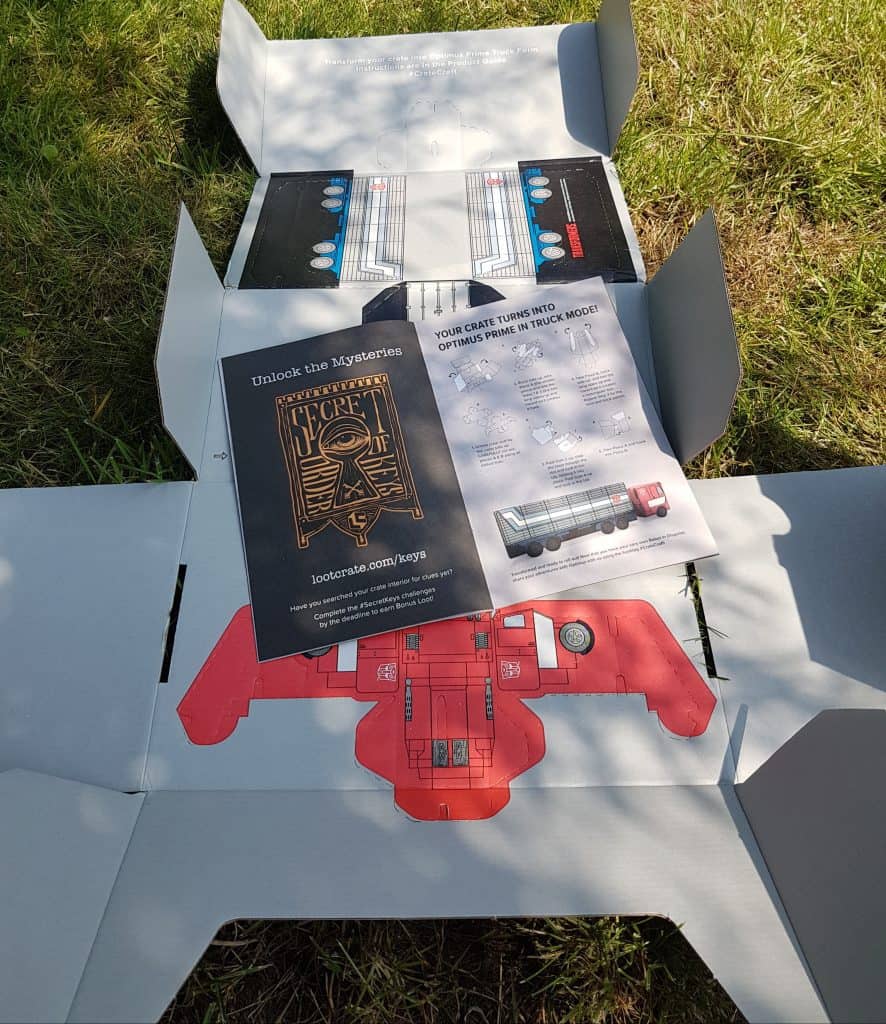 Some of you might remember last month I had the most terrible trouble with the box model; it was an abject disaster. So I approached this month’s version with some trepidation. 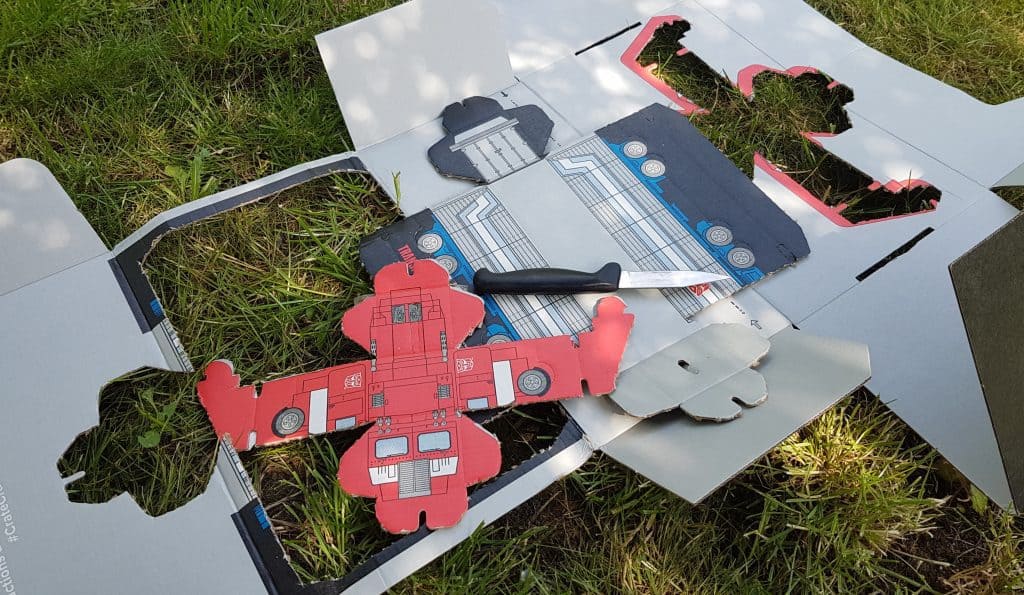 But this time the model was a lot simpler, the instructions slightly less confusing, and I managed to produce: 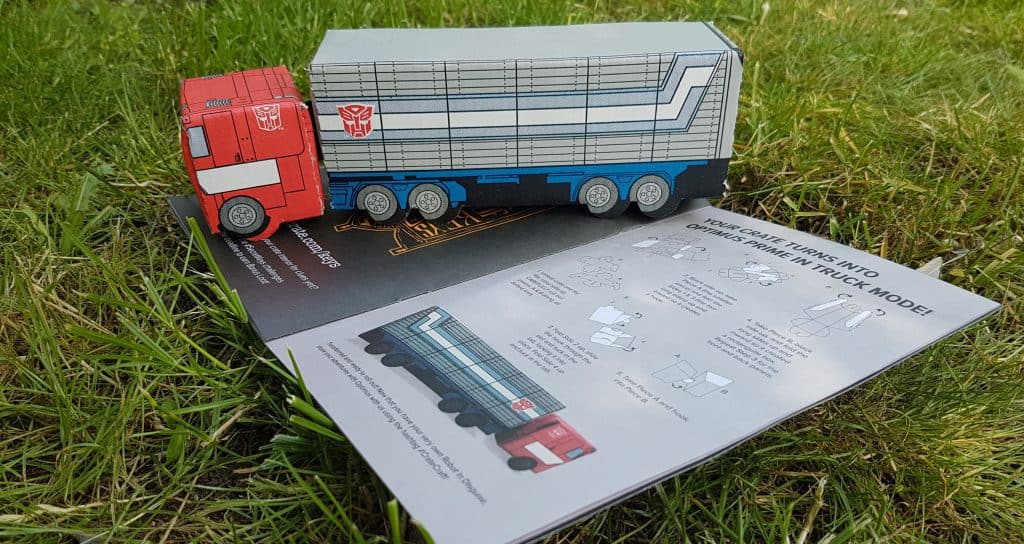 Optimus Prime in his truck configuration! OK, the printing is a bit off, but it looks pretty good. My daughter has appropriated it for her room.

LootCrate claims that each box contains at least $45 (about £35) worth of goodies. Every item is a LootCrate exclusive, so it’s difficult to assign a commercial value. However I can sort of find equivalents and guesstimate. I’ll also add my thoughts as I go along.

I love this month’s Q-Fig; he’s incredibly cool, it’s great it has some movement and flexibility, and the colourscheme is really unusual.

The t-shirt is an awesome design and feels lovely and soft. I just wish it was made from non-sweaty fabric.

I couldn’t find an individual bowl, but a set of plate, bowl, and cup (with a frankly cooler design) is £6.94 on Amazon.

The bowl is kind of fun. The design is both discreet and obvious, and it’s another LootCrate exclusive. My only problem is that it feels a bit cheap: the plastic is pretty thin, and even though it says it’s dishwasher safe, I know what dishwashers do to printed designs. I’m one of these people who doesn’t like eating from plastic (it’s made in China) and I’d certainly never put anything hot in it. It would be a cute thing to use for a little snack bowl, and nice for kids as plastic can generally be dropped without any problems, but it doesn’t feel like a quality item.

I found another ‘The New 52’ poster book on Amazon, and got excited when I saw it was £19.99. Then I saw the dimensions.

There is some stunning artwork in there, but the book is so small you really have to peer at the pictures to appreciate them. It would have been wonderful if it had been properly comic book-sized.

This is one of the best I’ve seen. The design is incredibly clever, and pleasingly grotesque! I also think it’s great they’ve ventured into the realms of nineteenth century literature rather than just sticking with the admittedly wide range of comic book dual characters.

Totalled up the value is very good.

I’m really pleased the DIY box transformation worked this time. I was so ticked off last month that I almost didn’t bother with this one, but I’m glad I did.

All in all, this is a great box.  There’s a nice selection of items, and the amazing Q-Fig compensates for the cheap bowl. The theme hangs together well, and the slight off-piste pin theme is a clever touch.