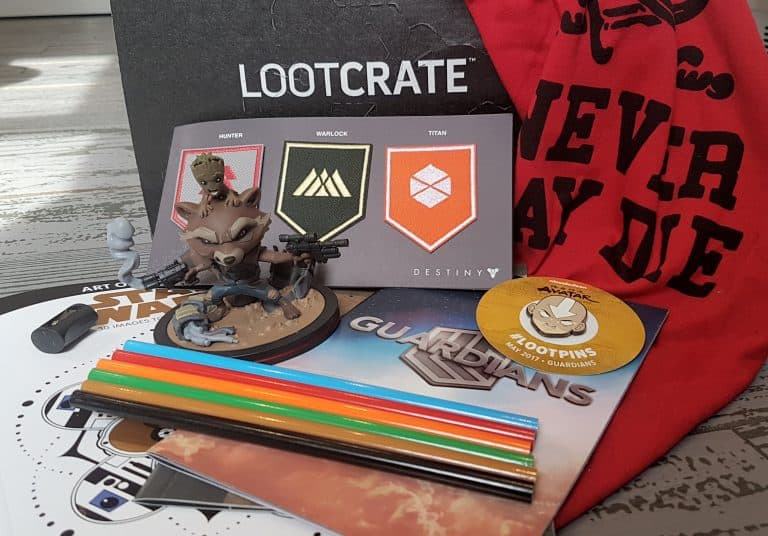 As an aside, I saw that April’s box included a Stranger Things t-shirt, and I’m SO sad I missed that one. That was one of the most incredible shows I’ve ever seen. Oh well.

This month’s theme is Guardians:

‘This month, we salute those that stand up for others, whether they’re protecting the galaxy, the world, or just the neighborhood. All hail the GUARDIANS!’

I caught some of the May teasers on Facebook, and was immensely excited because Guardians of the Galaxy 2 was being heavily promoted. Not only are they amazing movies, but (total proxy clang) but my awesomely amazing husband is playing on the soundtrack of the Guardians 2 movie! So very excited about this one. 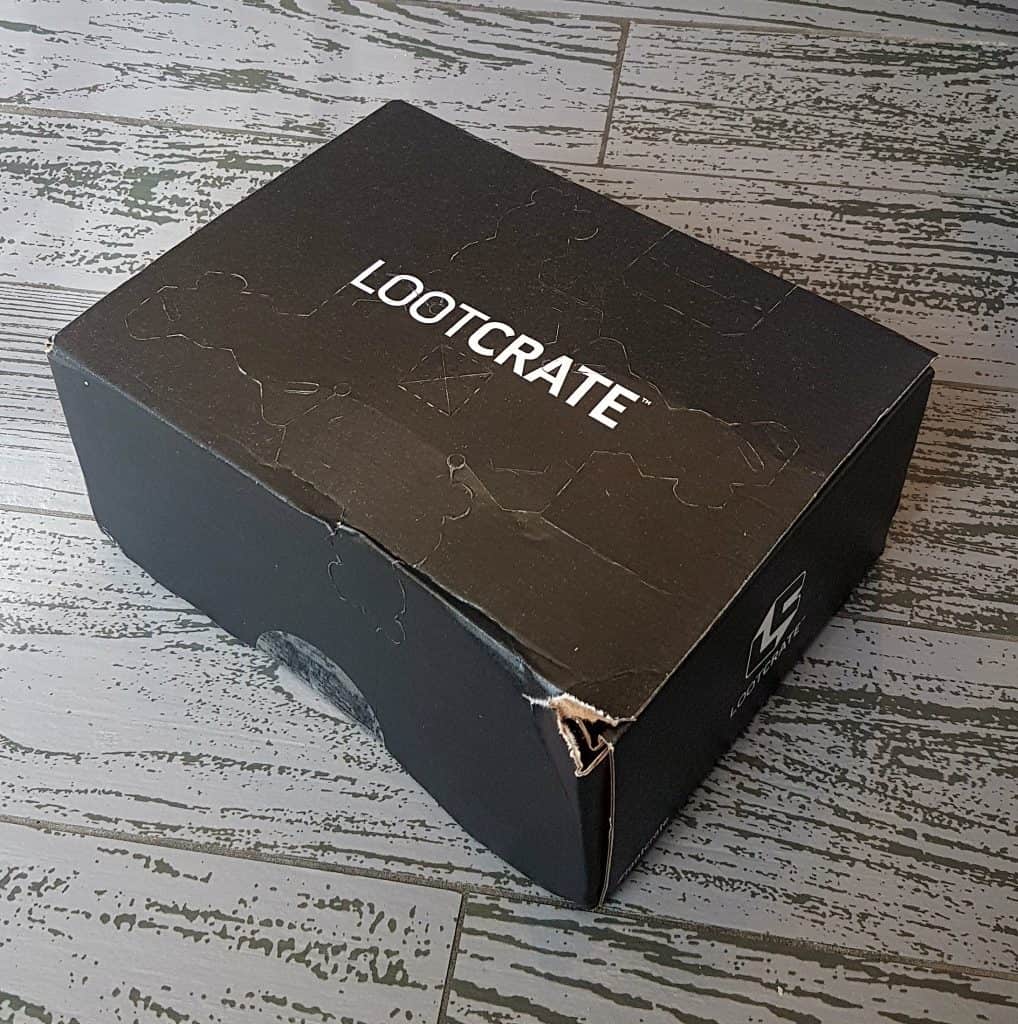 I was impressed that just a couple of days after I got the shipping notice, my Loot Crate arrived! It was rather bashed, although fortunately it hadn’t actually split open and nothing was damaged. I have a suspicion that somewhere on its long journey here someone used it to play football.

I also noticed that the top of the box appeared to have some kind of shaped perforations. More on that later.

Anyway, time to open it up. 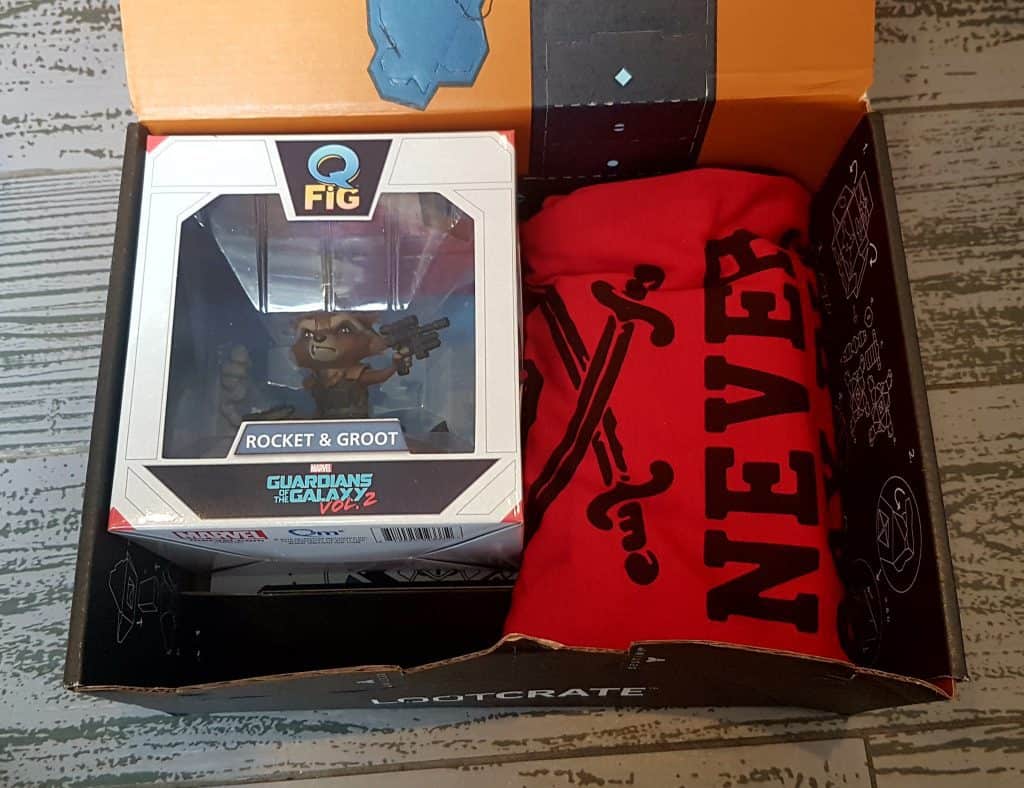 Right on top I could see a Guardians Q-Fig and the t-shirt! 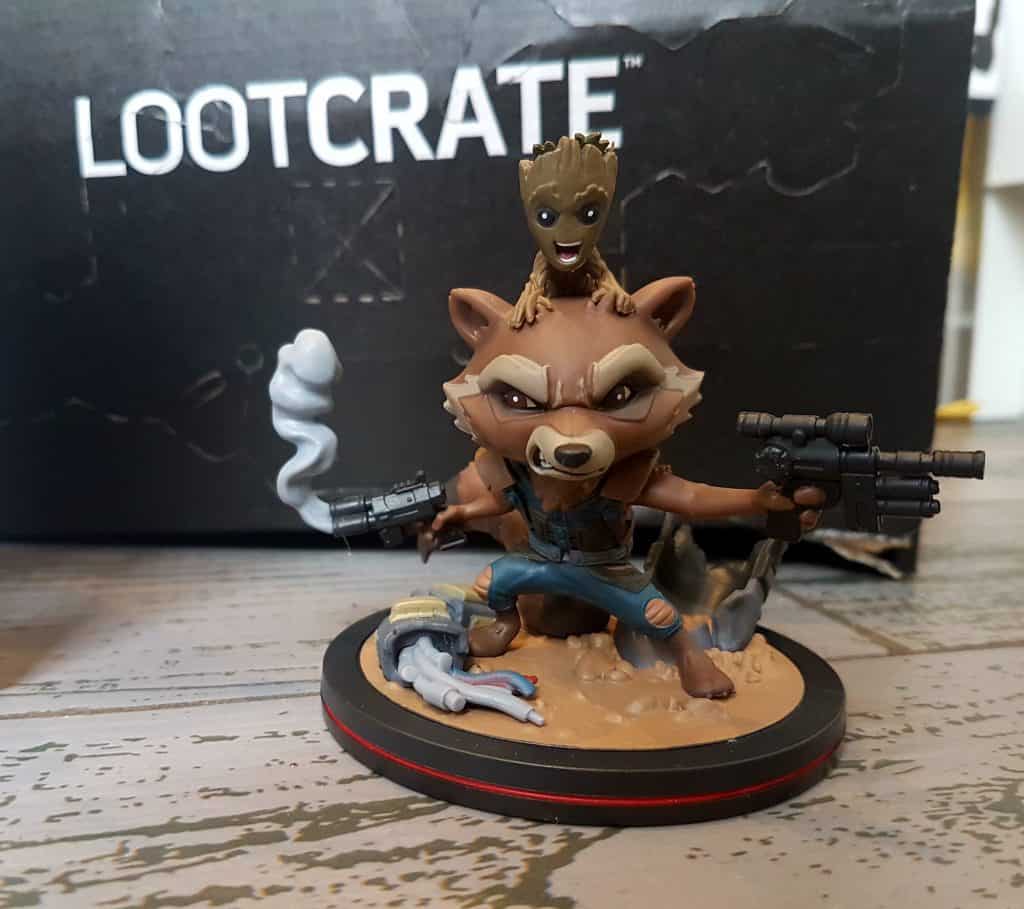 It’s a Rocket and Baby Groot Q-Fig! I love Q-Figs, because unlike POPs, they actually look like the character they are supposed to be. This is an terrific figure; the facial expressions are awesome, and I love the details such as the smoking gun and the trash on the floor. 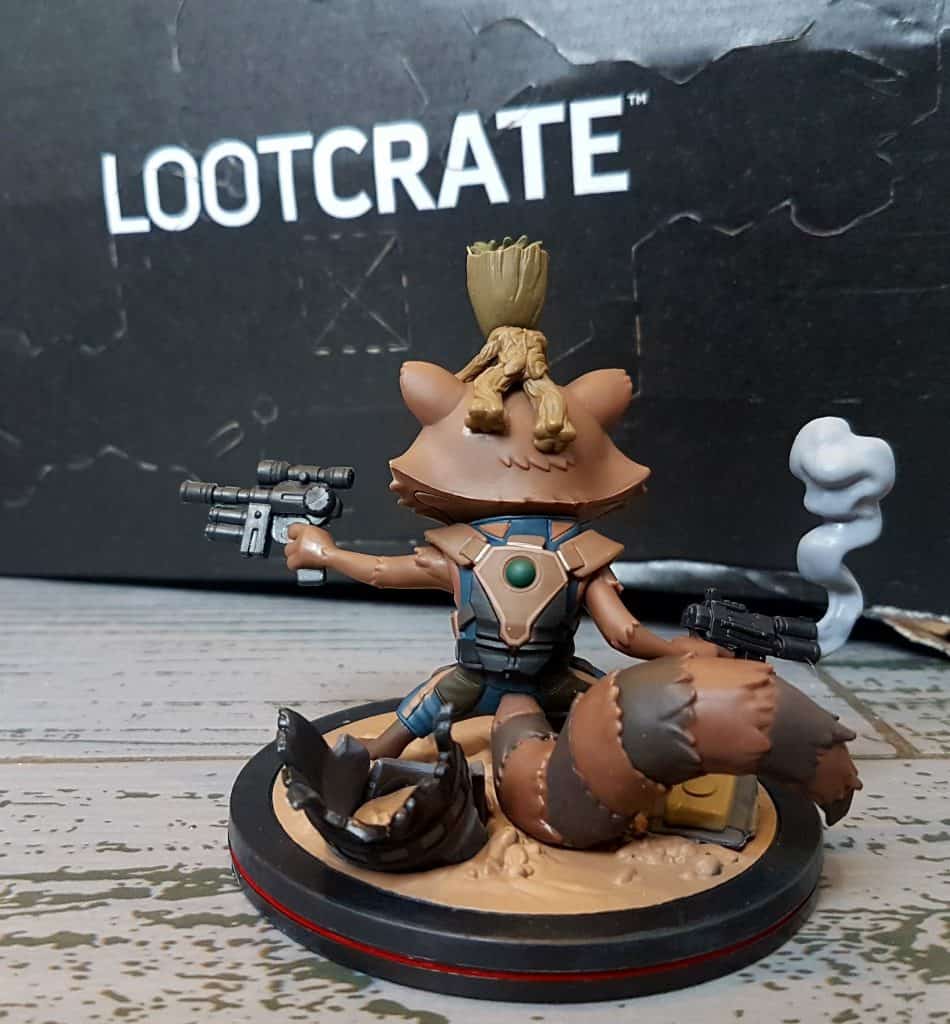 This is a LootCrate exclusive item you won’t find anywhere else, folks. I’d love it if they had figures of the rest of the crew as well, but this is a great addition to my collection! 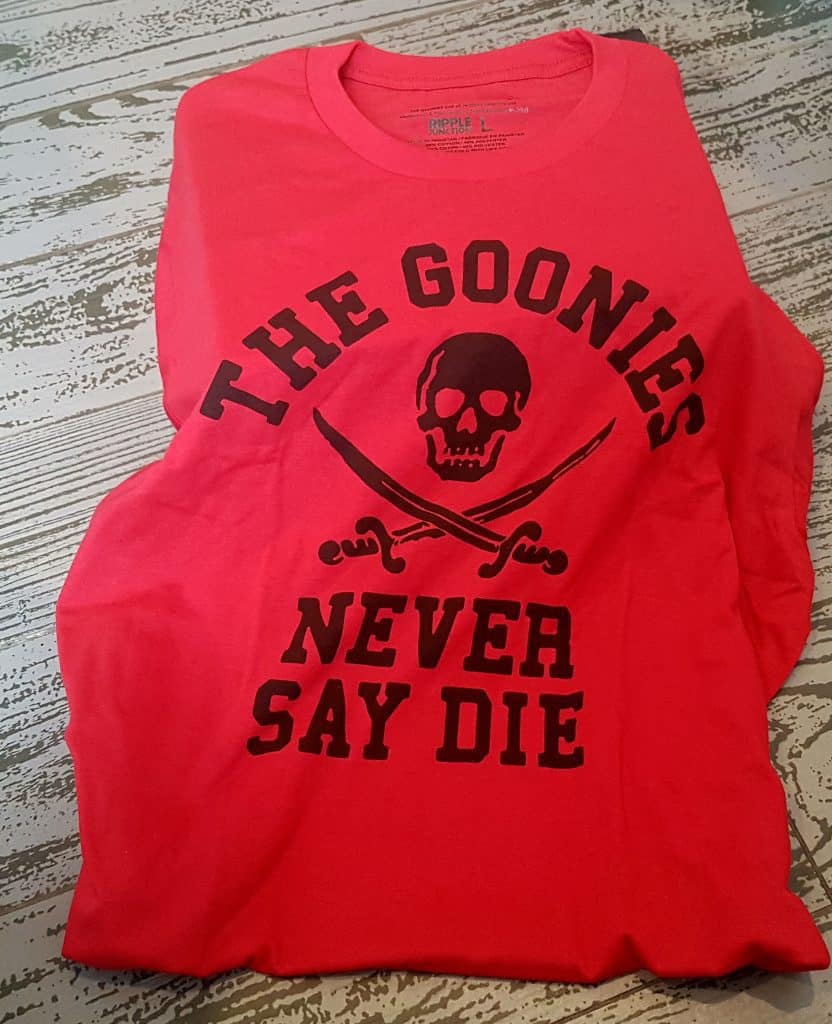 T-shirt time. This is the Goonies item, and has a striking design.  I have such find memories of the movie, and it’s a great slogan! For some reason I was sent a large, but it will be perfect for lounging around the house. 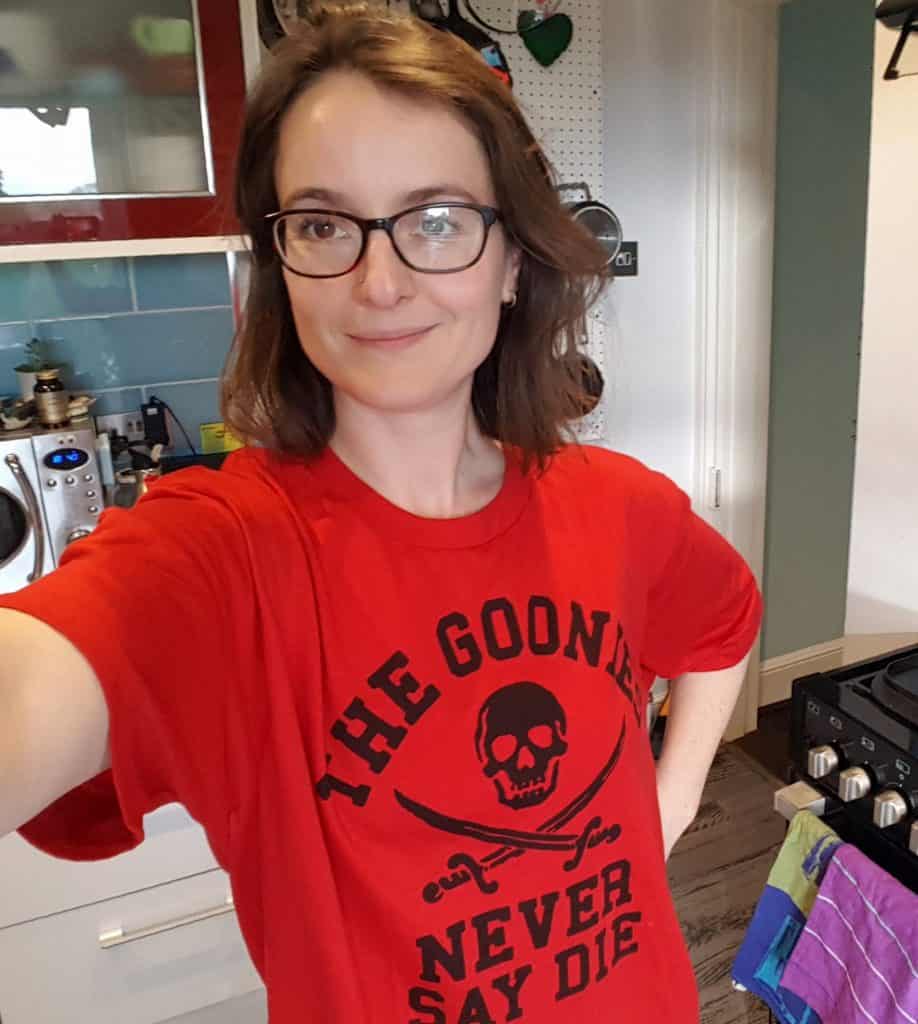 The quality is good, and it feels soft and drapes well, though it’s actually polycotton which can be a little sweaty. But a nice shirt nonetheless. 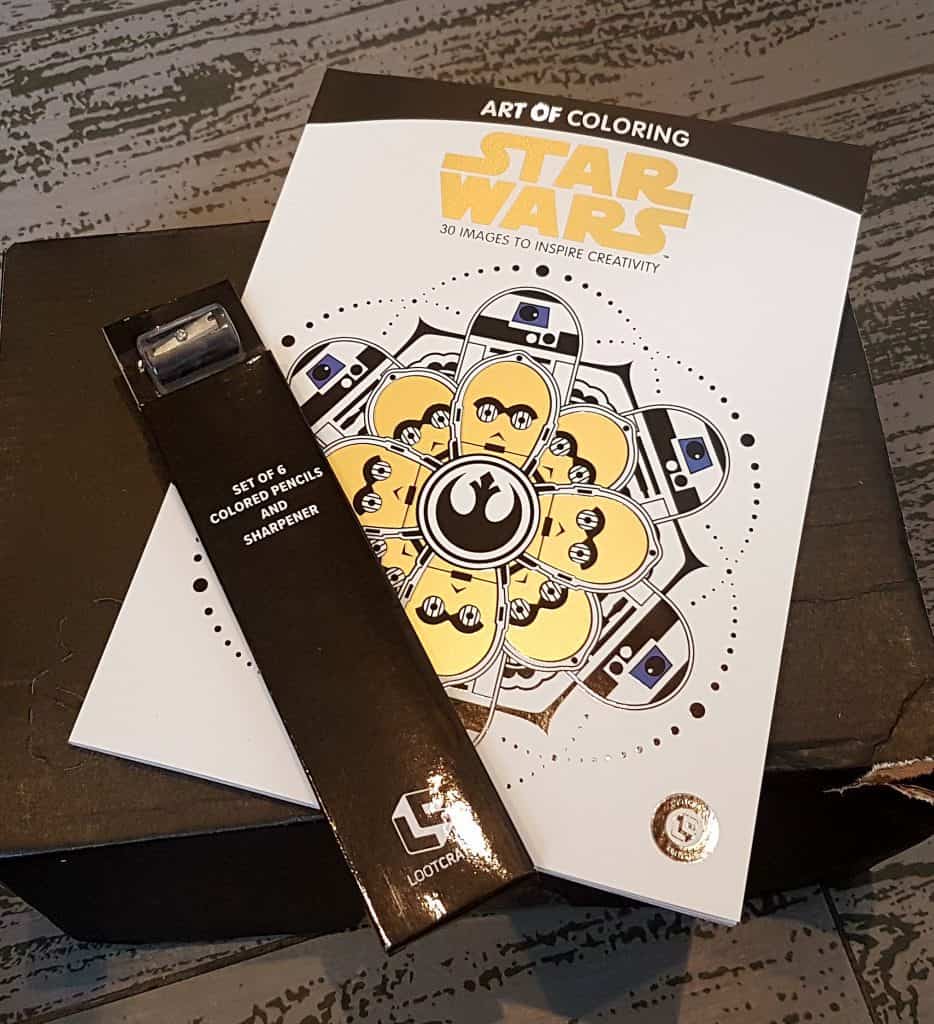 Star Wars – Art of Colouring. Adult colouring has been popular for a while now, and this book contains those meditative mandala-type patterns. 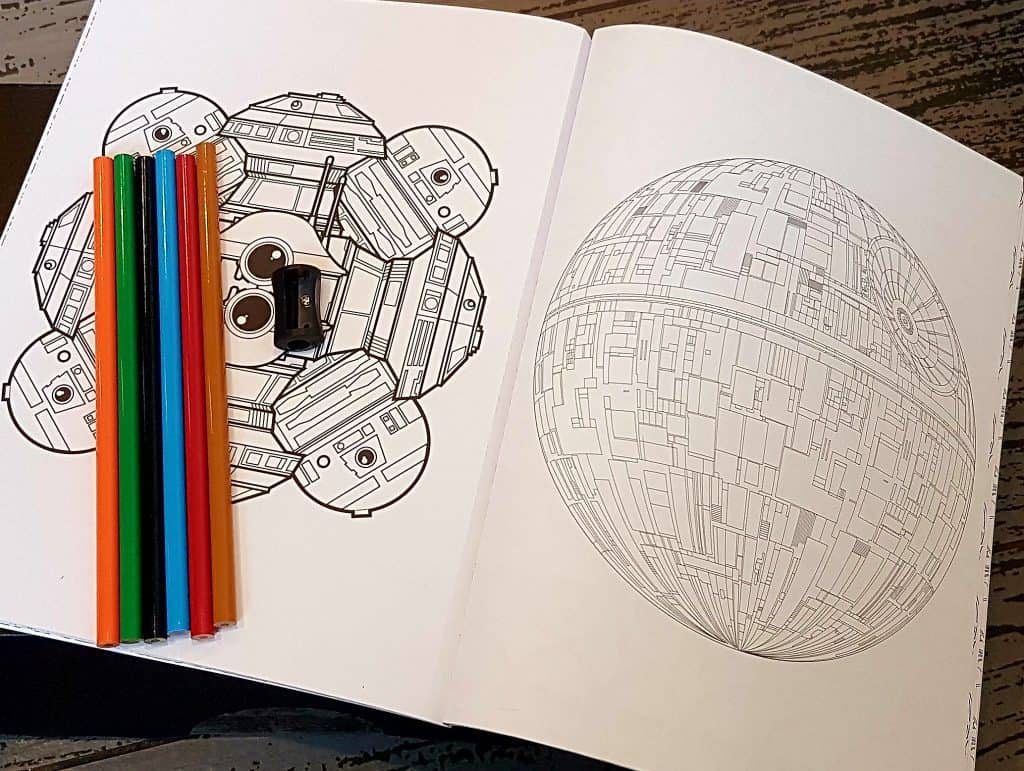 There are some lovely pictures in here, and it’s perfect for whiling away the time whilst you’re hurtling through space! This is another exclusive LootCrate item, and the pictures were hand-selected by the team.

Also included are some (sadly unbranded) colouring pencils and a sharpener. As the pencils are not sharpened I am very grateful we have an electric pencil sharpener.

My daughter pointed out that colouring is for everybody, not just adults. 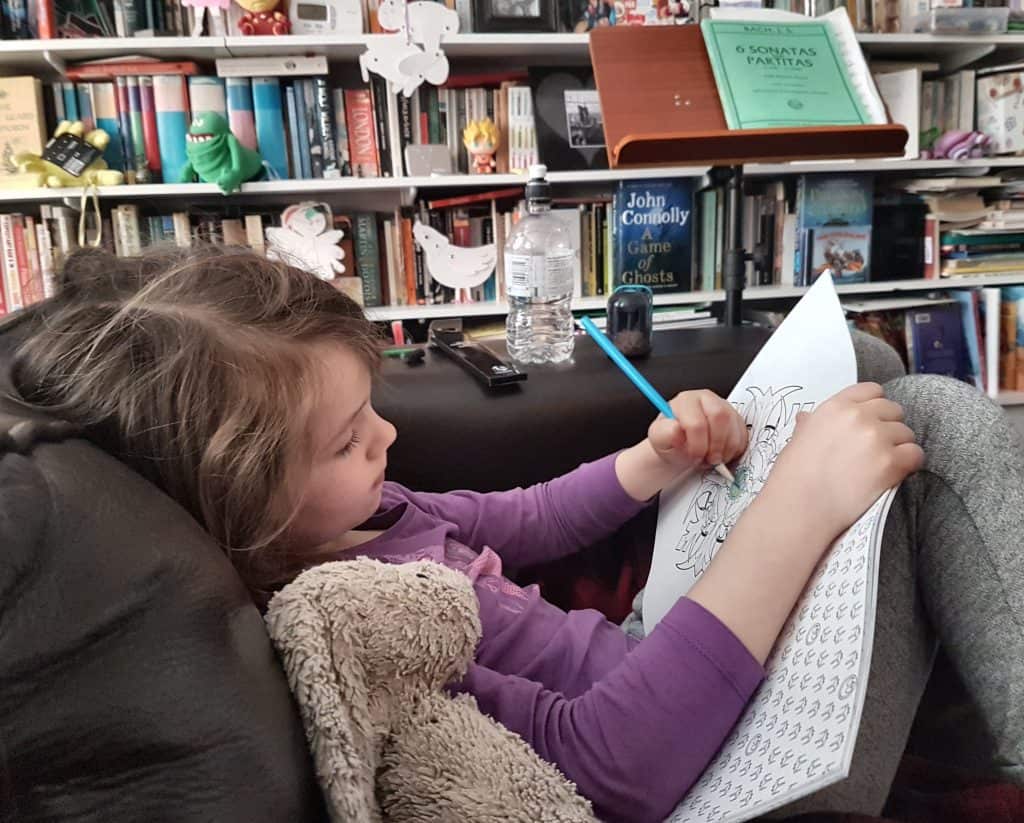 She is proving her point.

Now something for my husband, who is a serious gamer. 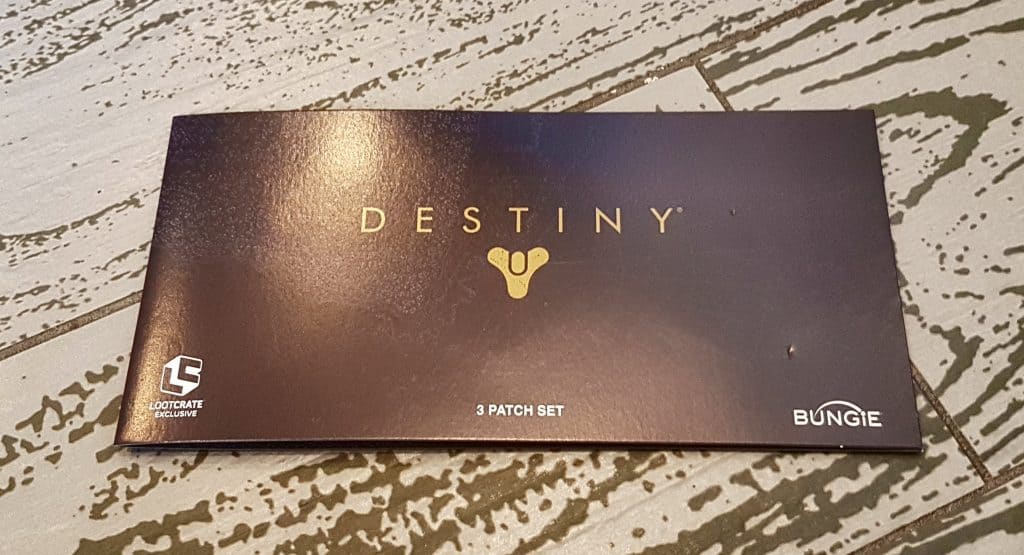 Look at these. Choose your class of fighter with these amazing patches. They can be sewn or ironed onto fabric, or you can even frame them if you simply want to gaze at them in admiration and delight. 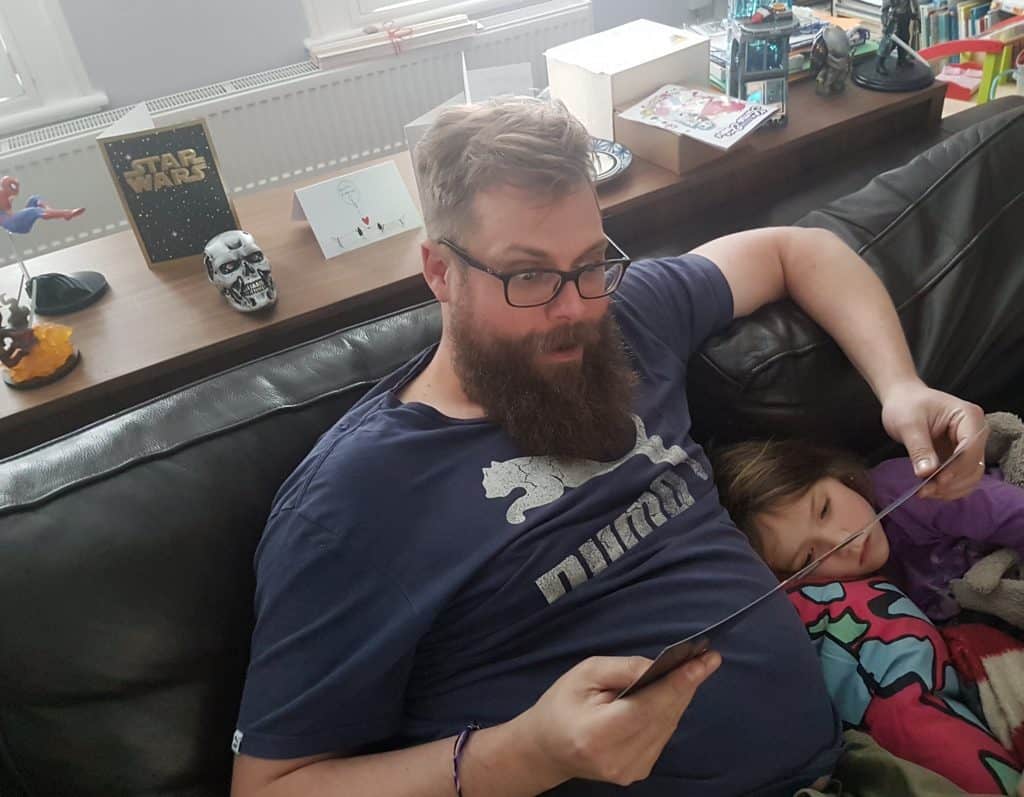 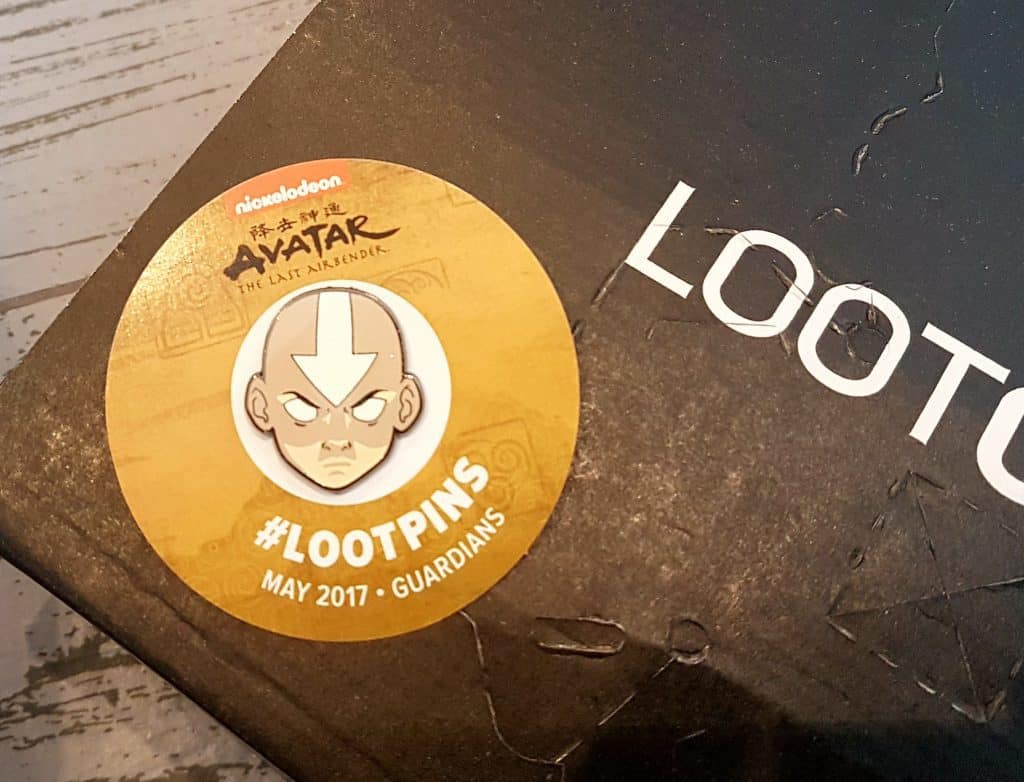 This is the monthly Loot Pin. It’s Aang from Avatar: The Last Airbender. As always the pin card has a url and secret code which unlocks bonus goodies.

An extra bonus detail about this pin is that it glows in the dark!

As well as the goodies above, you get a menu booklet. 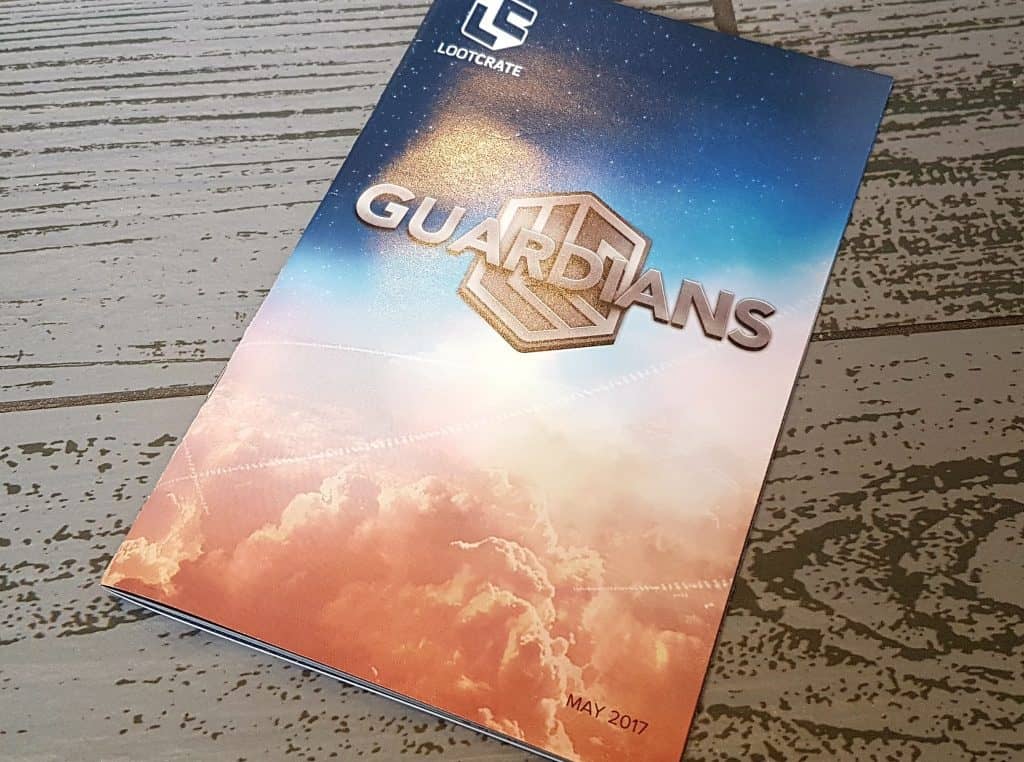 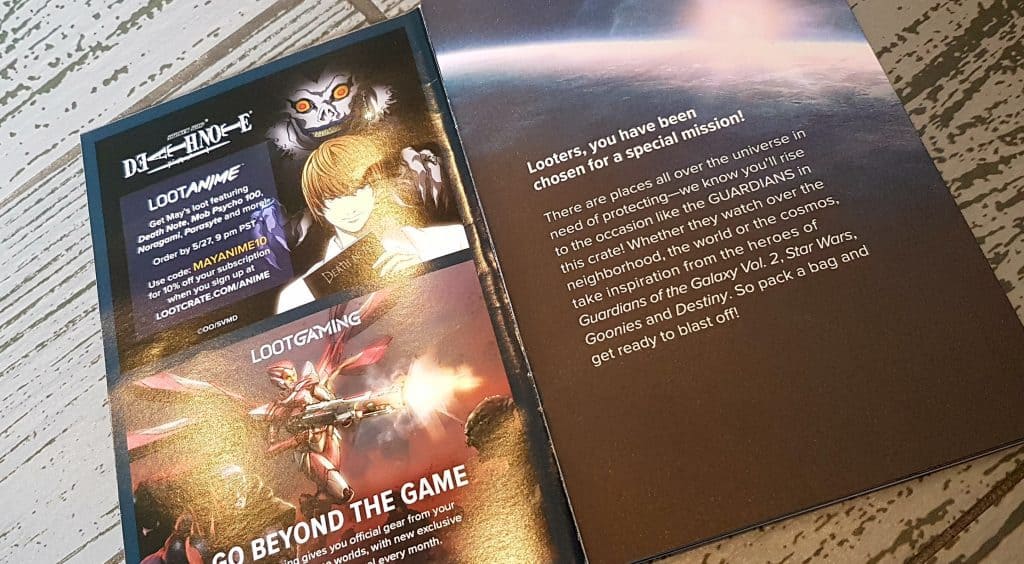 It contains details of all your Loot, plus competitions, free digital content, community page, and competitions, plus tells you how your crate will transform.

Also included is a booklet of online puzzles of various kinds, which can also unlock bonus loot. 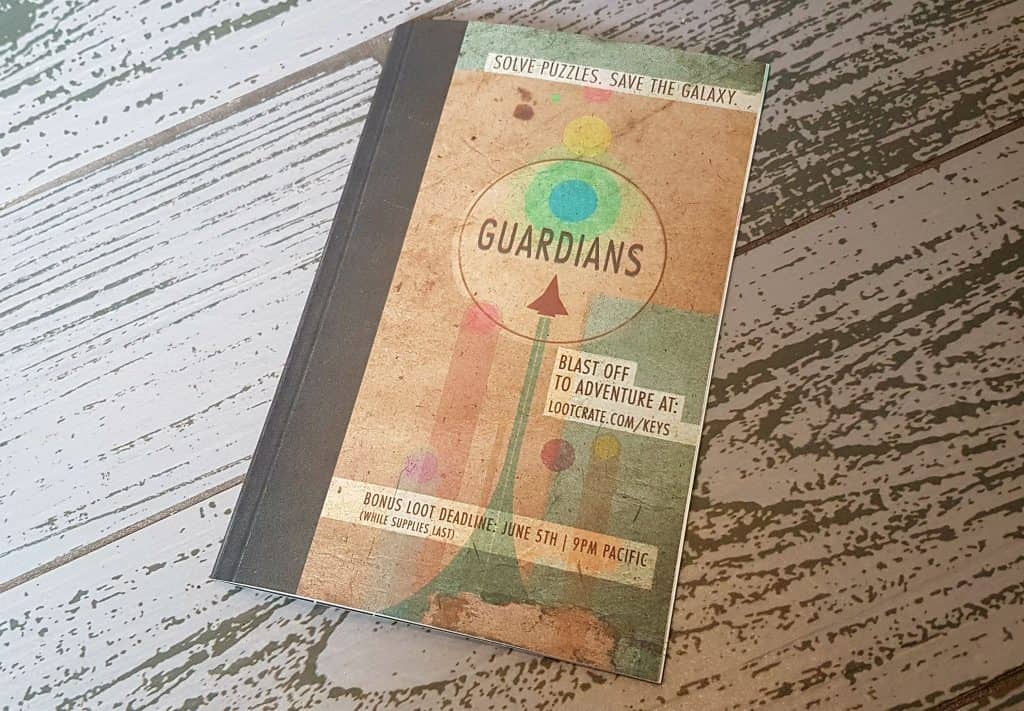 The final thing to do is the crate! Every Loot Crate box is printed on the inside and transforms into something related to the theme of the box. 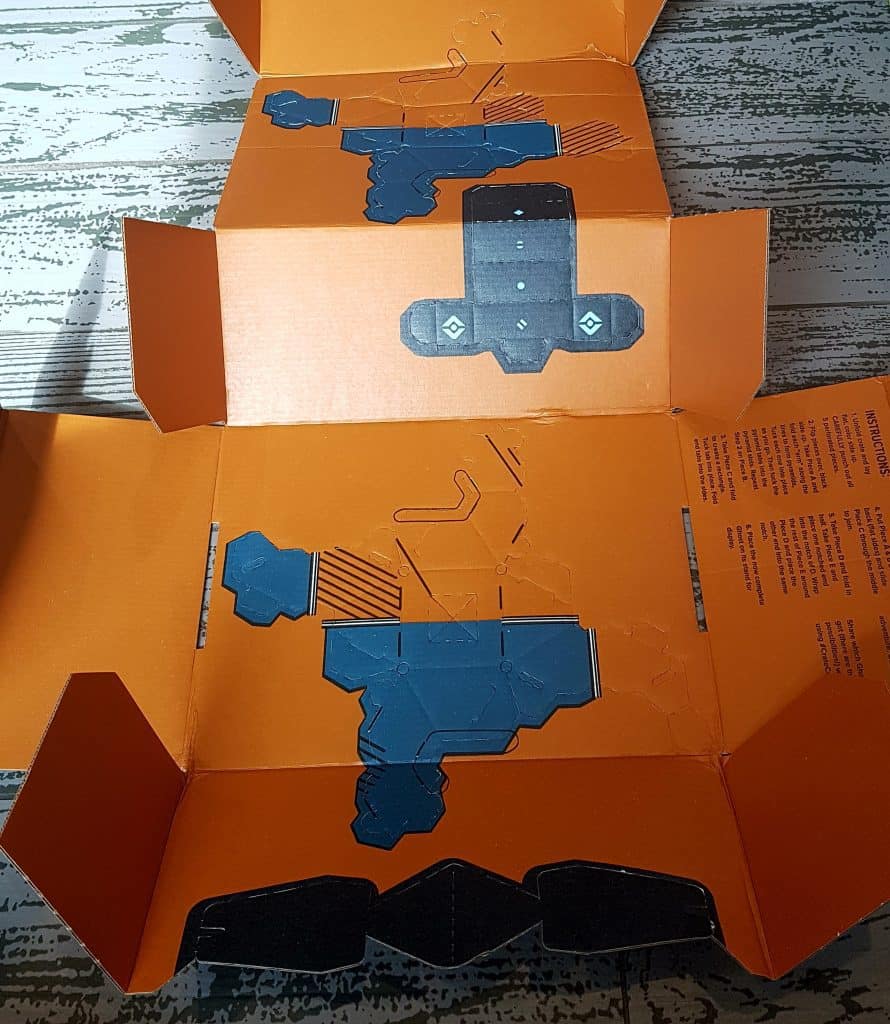 I’ve seen some pretty neat ones, but this is the first time I’ve seen so many perforations. Apparently this is going to be a Ghost from Destiny, to go with the patches.

Now, this was kind of awkward. The problem with perforating a box that has to be robust enough to travel thousands of miles (and be included in a football game along the way) is that the cardboard has to be rather thick. And single wall cardboard does not detach easily. I also realised that the shipping label on the box covered some of the perforations, which made it even trickier.

Anyway, I finally managed to release all the bits more or less intact. Then I tackled the instructions printed on the inside of the box.

Now, I own power tools, I can assemble two-person Ikea furniture by myself, and I’m pretty good at figuring out how stuff fits. Attempting to put this thing together was a bloody nightmare. Tabs bent and frayed, edges were torn, the instructions were confusing, and the illustrations virtually useless. I’m not kidding when I say it was so frustrating I started to feel almost tearful. Dammit. After a half hour of faffing I finally gave up. 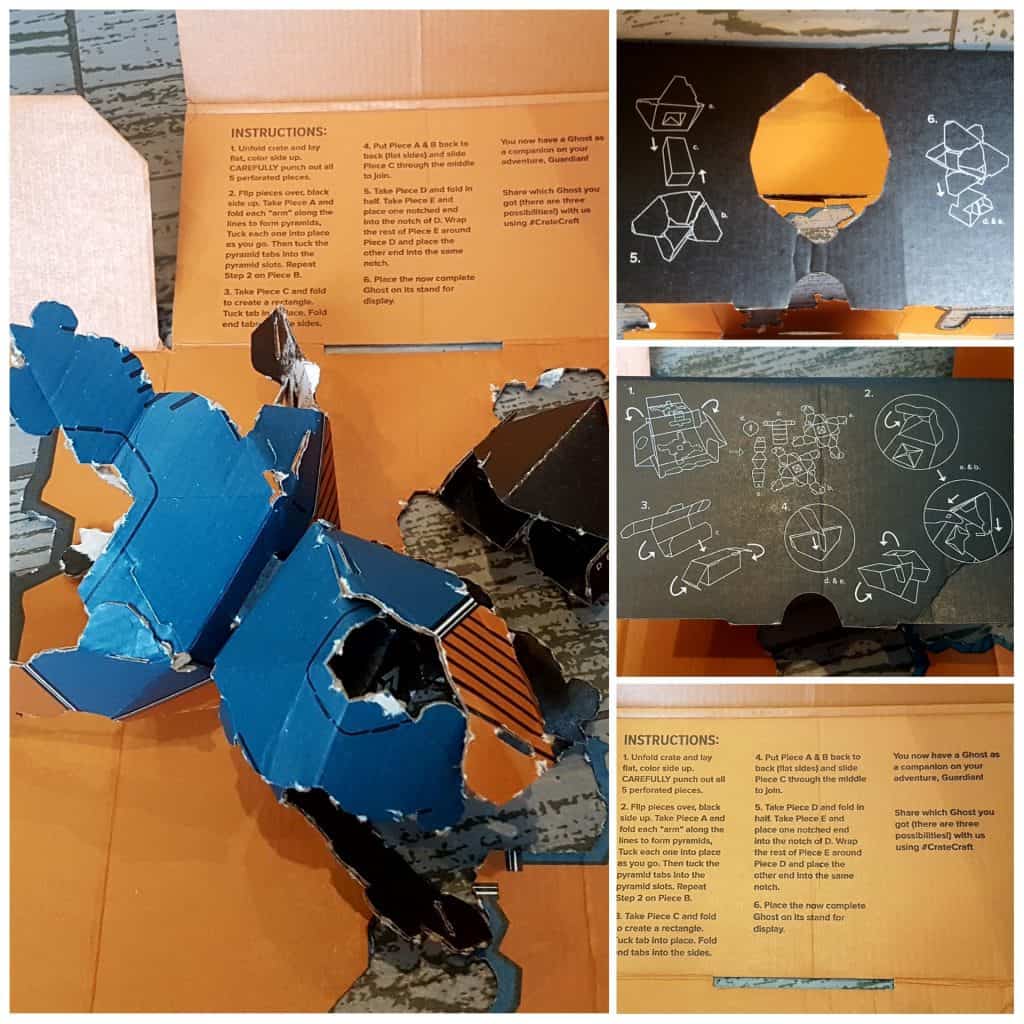 In the next few weeks there may be many successful constructions of these boxes posted on the internet. This is not one of them. As far as I know this is by far the most complicated and fiddly one LootCrate has produced, and to be honest, I don’t think the box is made of the right kind of card for this level of detail. The instructions were also very difficult to follow, and the diagrams were not at all helpful.

I’m kind of sad that this was the last part of my LootCrate experience, because it made me feel crap. This is not how I want to finish it up. I also wanted to have a cool picture of the thing I made.

However, I won’t let it interfere with my rigorous assessment of this LootCrate box.

LootCrate claims that each box contains at least $45 (about £35) worth of goodies. Every item is a LootCrate exclusive item, so it’s difficult to assign a commercial value. However I can sort of find equivalents and guesstimate. I’ll also add my thoughts as I go along.

I love Rocket and Baby Groot. I’m not ashamed to admit I cried when Groot died in Guardians 1, and again when he came back to life. This is such a quality figure, with beautiful detailing and a well balanced design.

This is a fun shirt. It’s kind of big, but I’m more likely to wear this kind of shirt in a slobby, around-the-house kind of way so it’s perfect for that.

Colouring book – I found a similar book on Amazon for just over £10. Seriously.

I’m not totally convinced by this. Firstly because I find ‘adult colouring’ kind of childish (being a fan of comic books is in NO WAY similar, may I add), and also because the very few adults I know who are into this kind of colouring are all women and are entirely disdainful of all things geeky and cool.

Also, I think they should have branded the pencils too. They look a little cheap.

That being said, my daughter likes it. She’s six, and she loves both Star Wars and colouring. So I guess it’s OK.

Destiny patches – tricky this. I can’t find similar to compare, but I think it would be fair to say that you can get embroidered patches for around £3, so £9 for the set.

My husband was very, very happy with these, and is now figuring out where he’ll put them. Destiny’s not my bag, but I do think these patches are cool. They’re very discreet, and a great but subtle way to show your fandom.

This was not one of my favourite pins. It’s cool that it glows in the dark, but I don’t find the design very inspiring, and it’s not a franchise I’m at all interested in.

Totaling everything up there’s no question this is excellent value.

I’m going to say right away and get it out of the way that I hated the box assembly thing. Sorry LootCrate, I think it was a really interesting idea, but it just didn’t work for me. And if you’ve got a massive (and necessary) shipping label covering half the perforations that’s really going to cause a problem.

I must confess I’m slightly disappointed that there was only one Guardians of the Galaxy item. Yes, I know, it was the (awesome) figure and that’s kind of the biggie, but Guardians featured so heavily in the promo for this box that it felt a tiny bit of a letdown. The name of the theme, Guardians, kind of implied it would be a little more Guardians of the Galaxy-heavy.

But never mind, the other items are pretty good. I’m very pleased that there is stuff for the whole family to enjoy, and even if I don’t love the pin and the colouring is slightly naff, the exceptional items make up for them.

This box is their core box, and I would say it’s kind of mid-range. I think it’s great they have a t-shirt every month, and they often include a really good figure (again, I love Q-Figs), and their value adds up well. The extra digital content, such as a couple of digital magazines, also feels generous.

I think this is a great starter subscription because at little more than twenty quid a month it’s a great way to build your collections and expand your fandom at an excellent price. It would also make an very nice gift and again, the price point is reasonable enough that you could get a longer subscription without breaking the bank.

I’m looking forward to seeing what they come up with next month!