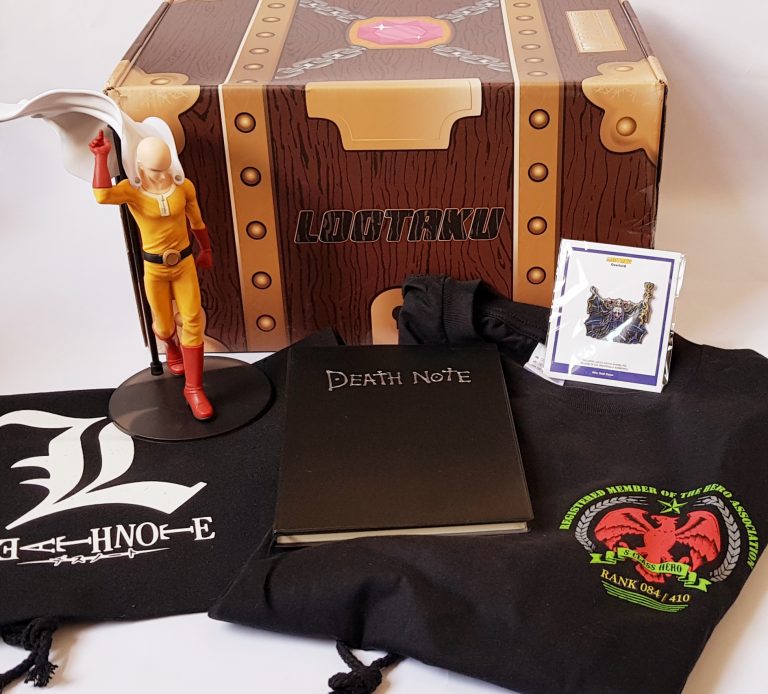 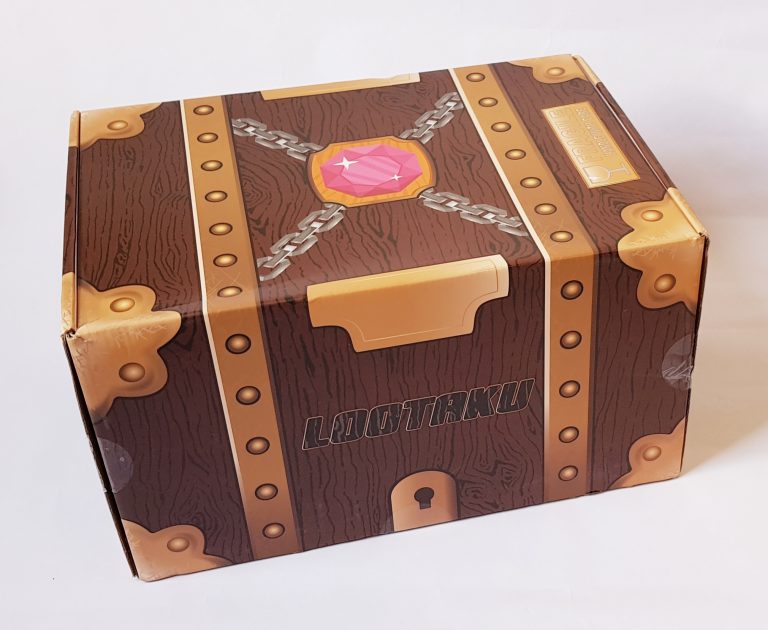 The shipping box is quite large! But it looks pretty nice.

This month’s theme features no fewer than three franchises: One Punch Man, Death Note, and Overlord. 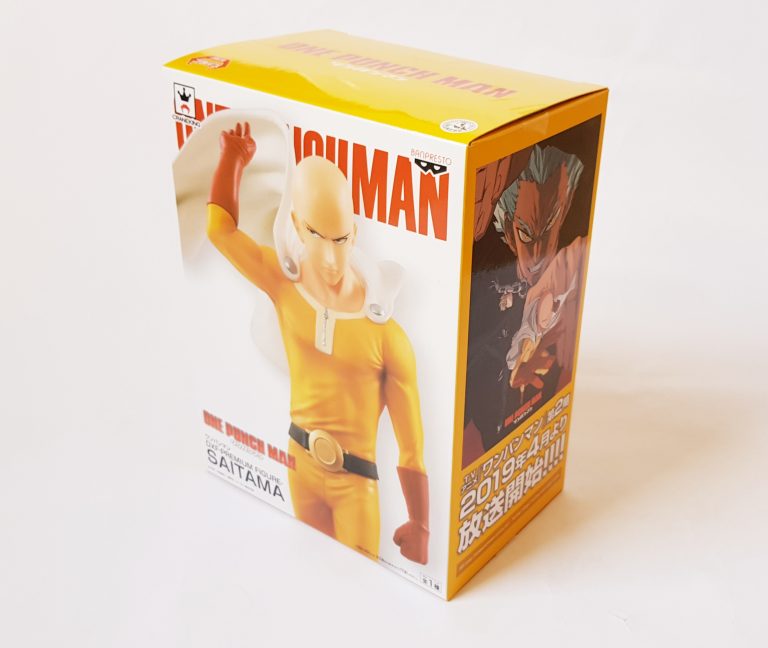 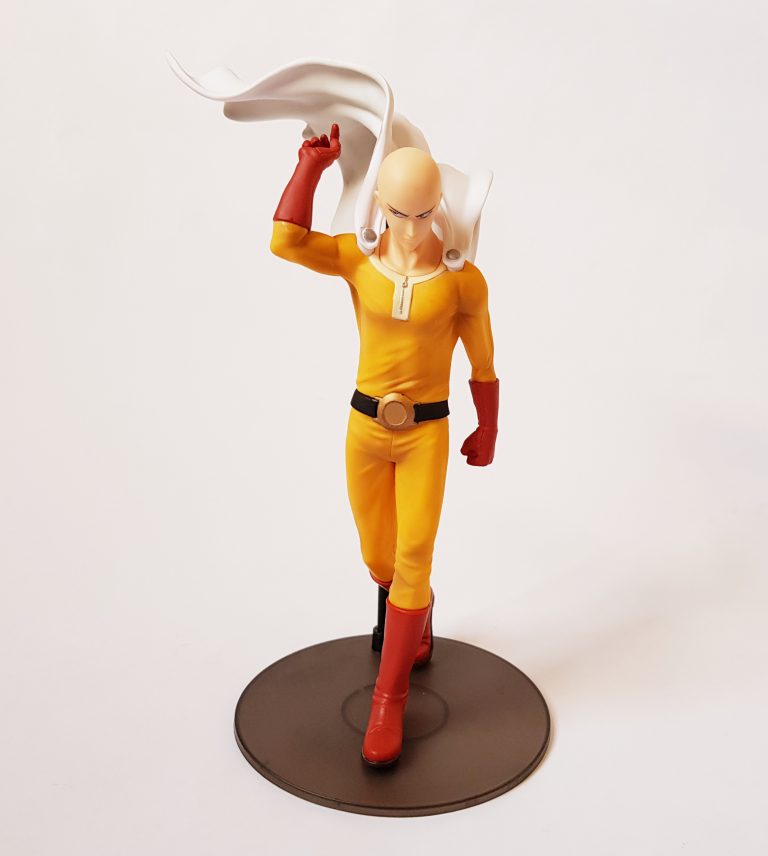 It’s a great figure, as One Punch Man is striding along having just flipped his cape aside. 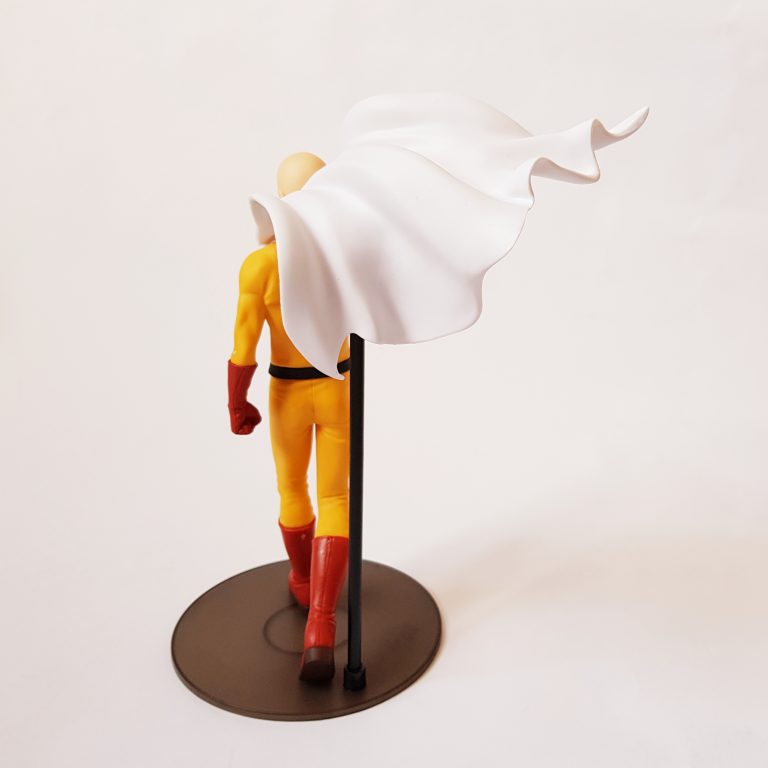 As well as a stand, the figure also has a an extra stand to support the cape, though it does stand well on its own.

This figure isn’t actually released in the UK until June this year, so it’s always fun to get things ahead of time! 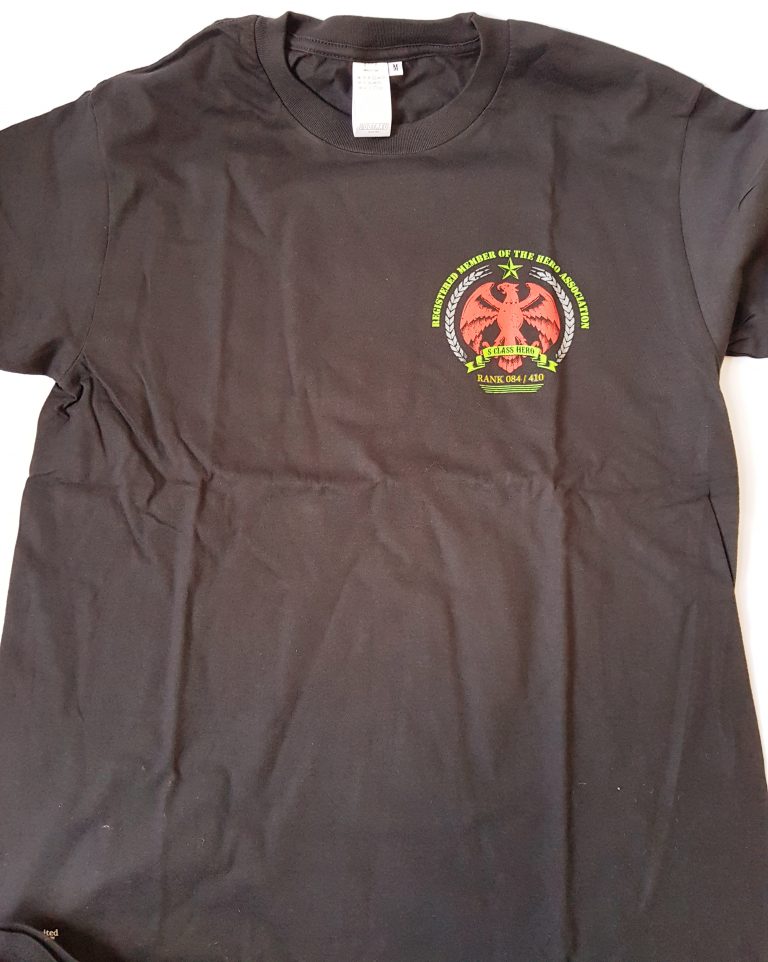 This month’s t-shirt is also One Punch Man themed.

It’s a Hero Association design, and the unique limited edition number is actually incorporated into the logo on the front. 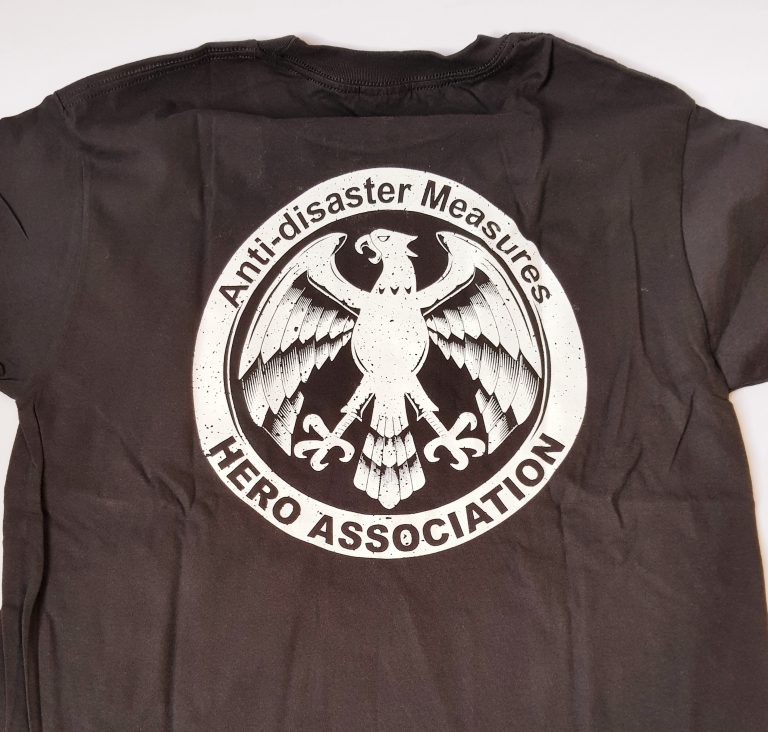 There’s also another print on the back, with another hero version of the Hero Association. 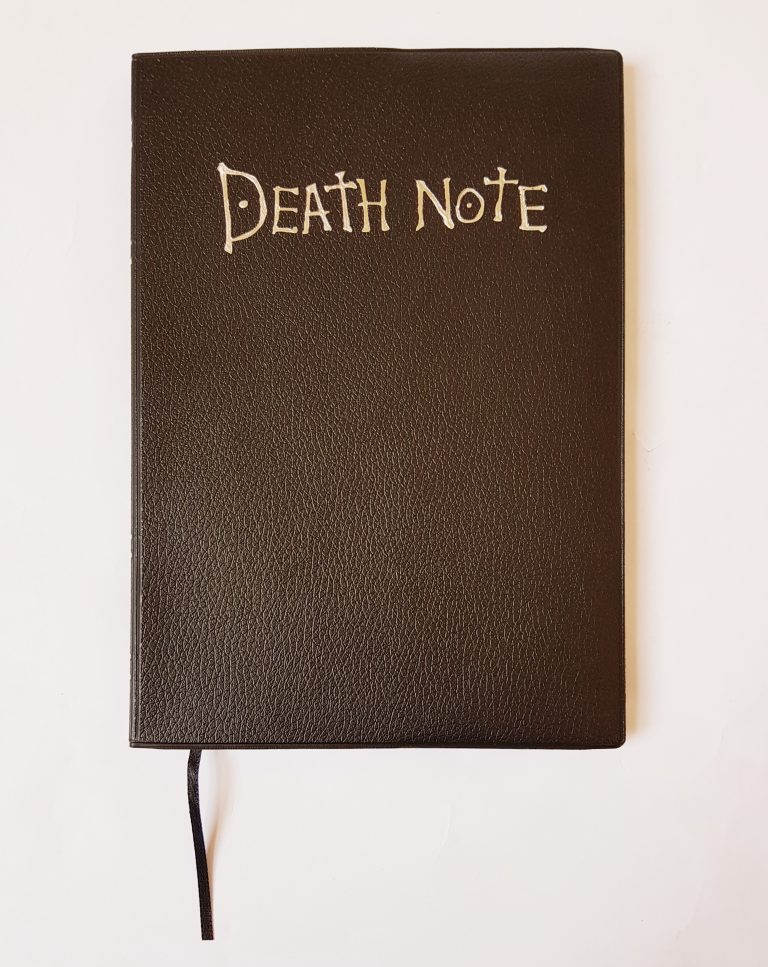 This notebook is the first of two items from Death Note.

It’s a soft back leather-look notebook, complete with a ribbon marker. 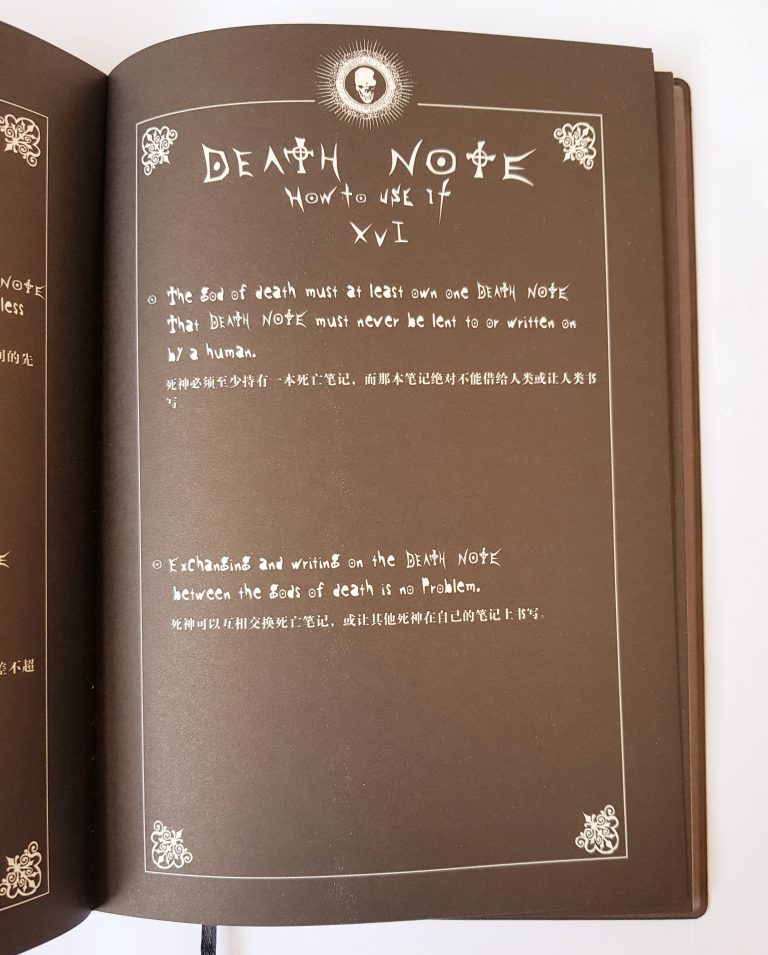 But it’s not just a regular notebook. As well as pages for your own notes, it contains the full rules for Death Note! great for regular use or even for cosplay. 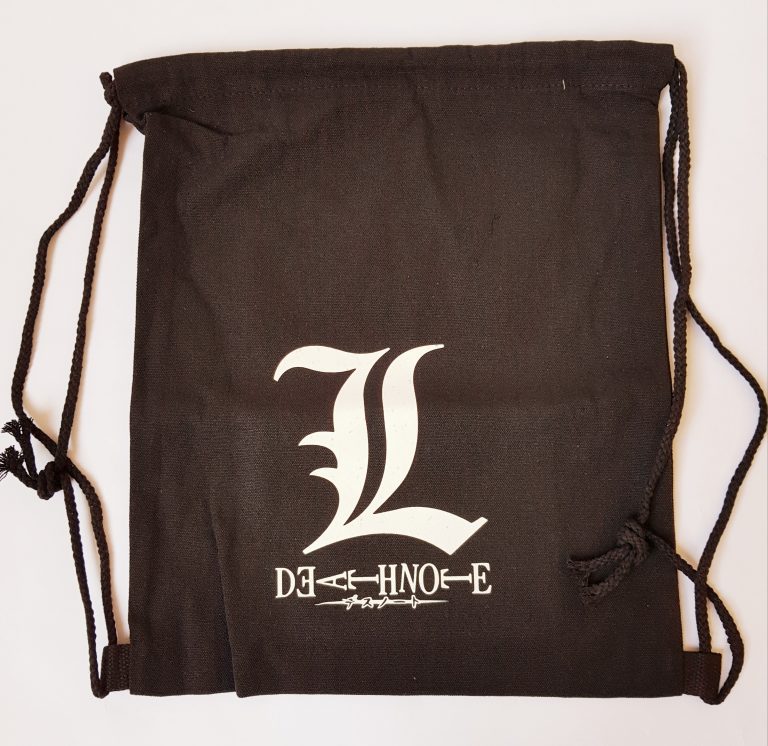 We also have a Death Note Drawstring Bag, which is a nice sturdy cotton bag with drawstring shoulder straps and closure.

It’s got the logo of ‘L’, one of the main characters in this anime. 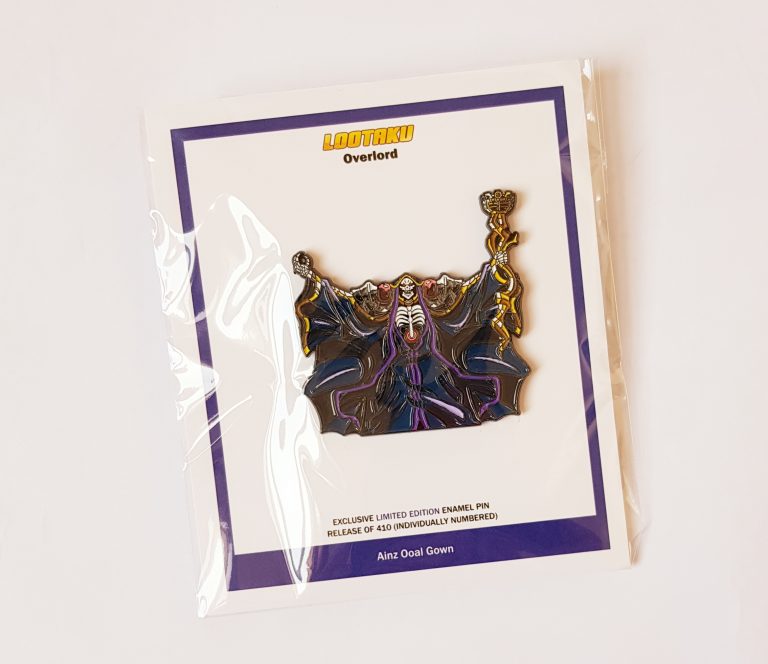 As always, it’s a large and beautifully detailed enamel pin. 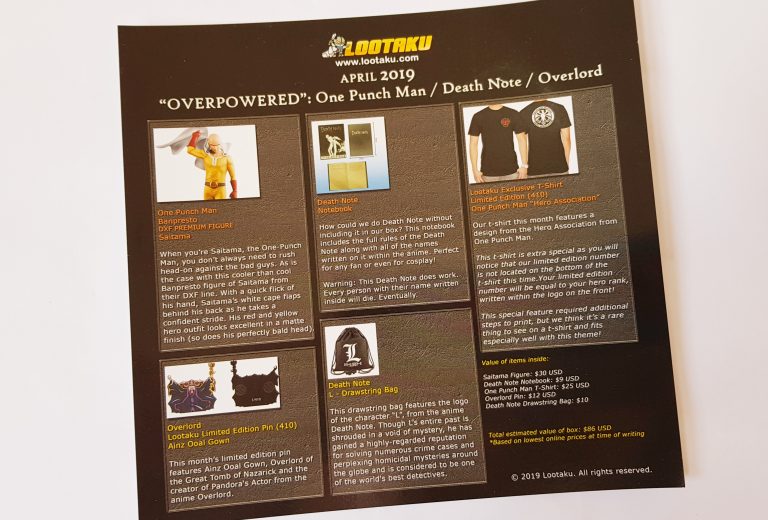 There’s also a menu card which gives you descriptions and values of each item.

I’m not so familiar with this month’s franchises, though I do like all the items.

Lootaku are always excellent at figures, but it’s also nice to have other items. The bag is particularly fun, and I love the notebook, it’s surprisingly dark!

Because it’s sent from Hong Kong it often takes a little while to arrive, but they’re catching up well after the big delay earlier this year from Chinese New Year.

Value from Lootaku is always good. It’s definitely a premium box, especially considering the postage costs, but the items are always good quality and the figures are always impressive.

Having a little look at Google, plus estimating some prices, I reckon this adds up to a little more than the box cost. The t-shirts are excellent quality, much better than your average geek shirt, as well as being limited edition. The figure isn’t yet available in the UK either, but it’s going to retail around £25. The only thing I found easily was the notebook, which is currently on Amazon at £6.99. But the value if the rest is definitely more than the full price paid.

Lootaku always does a great job at finding interesting and fun items for anime and manga enthusiasts. I love the figures, but I also love how they find fun and useful items that also fit in so well with geek culture!