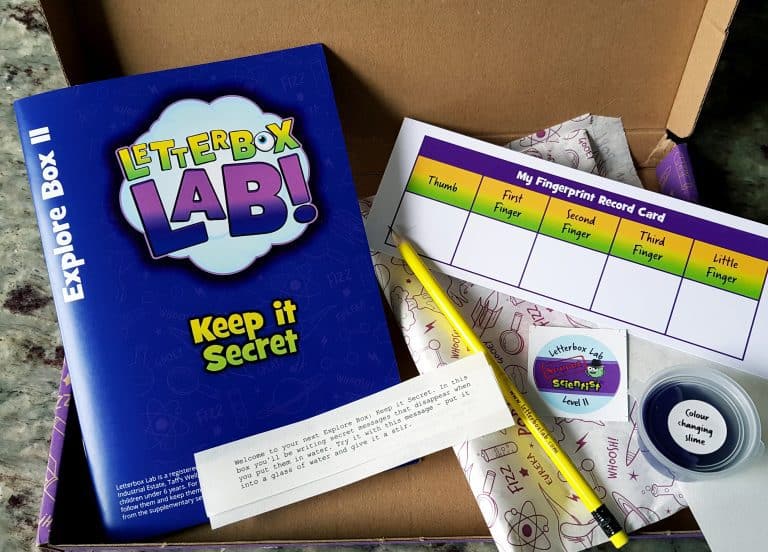 Letterbox Lab provide innovative children’s science kits as subscription boxes.
The Explore Box (£8 + £2 postage) is for kids aged 6+ and contains a least an hour’s worth of fun science.The Investigate Box (£22 + £2 postage) has more experiments and more items of collectible lab equipment with enough to keep a junior scientist busy for 3 or 4 hours.Both kits have full-colour illustrated instructions and online videos to make it easy to do all the experiments.My lovely helper is my daughter, Little C, age seven. I was sent an Explore Box, which is perfectly designed for her age group. 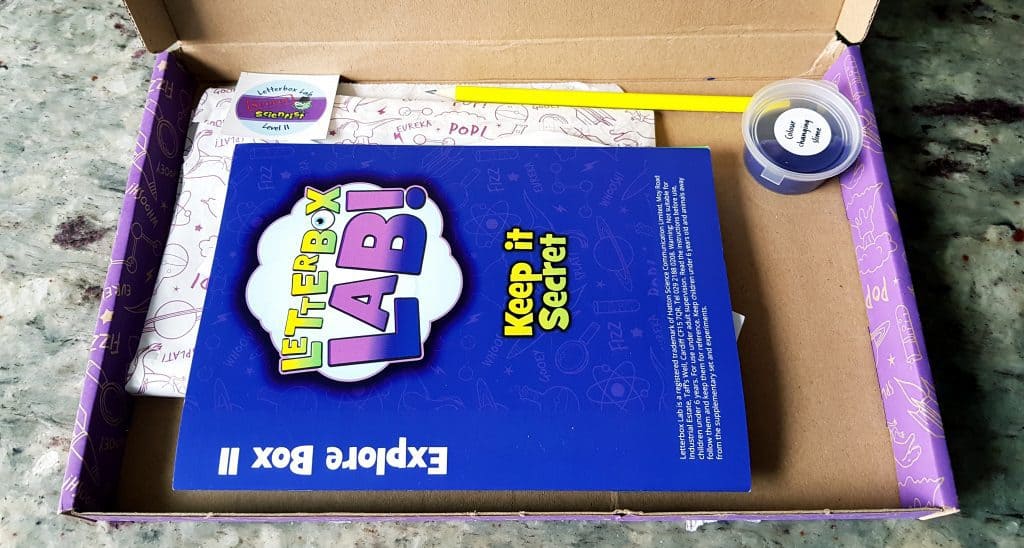 This month’s theme is Keep it Secret. Looks like there might be some mysterious spy things to explore here! 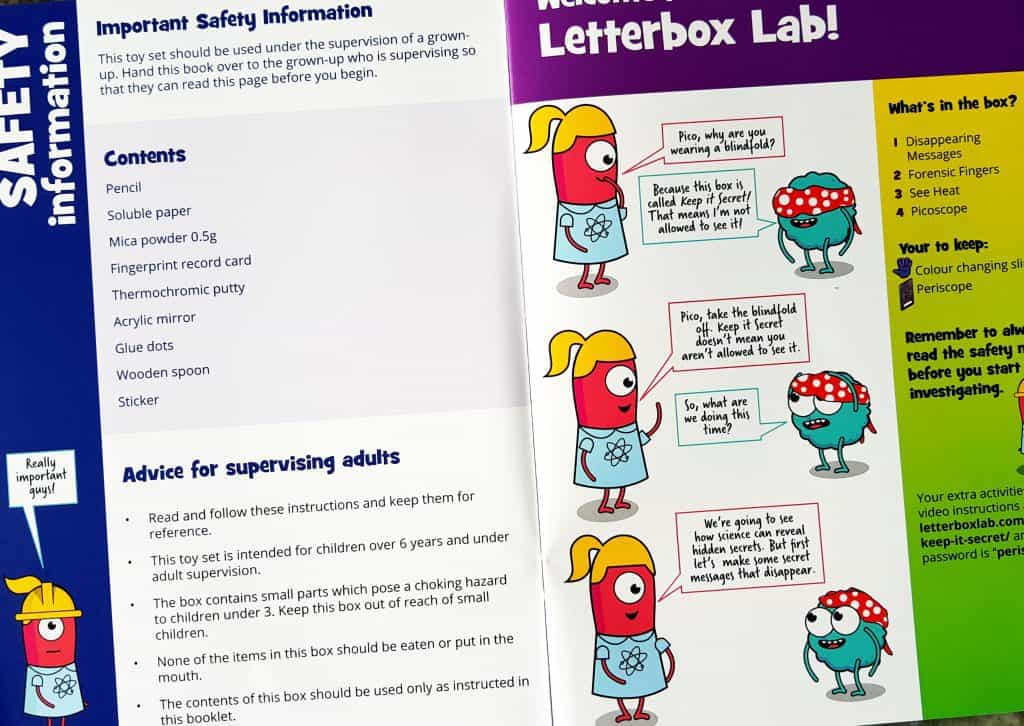 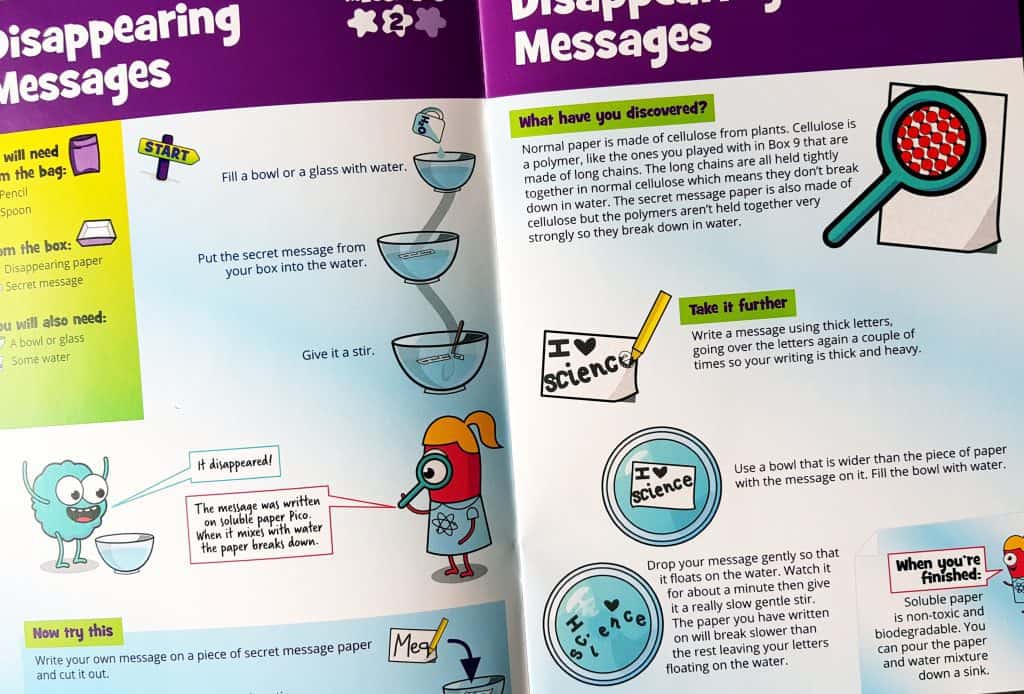 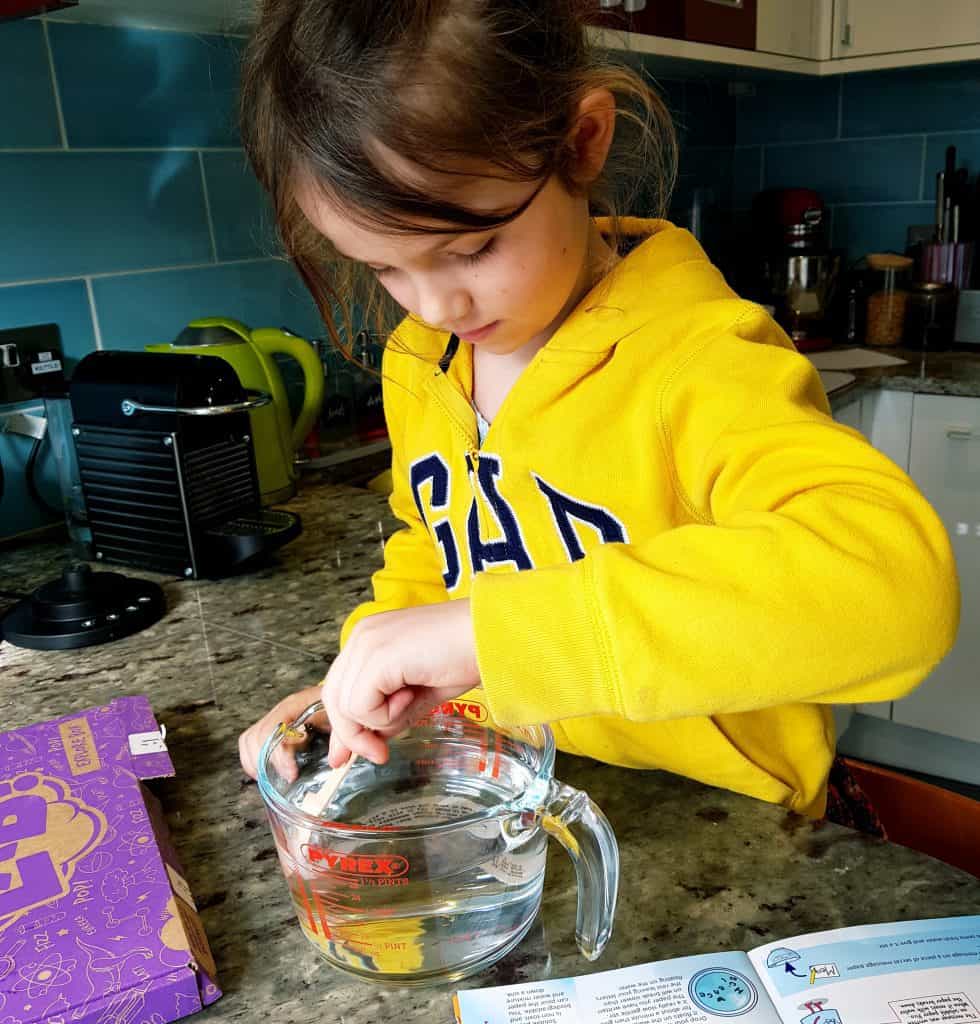 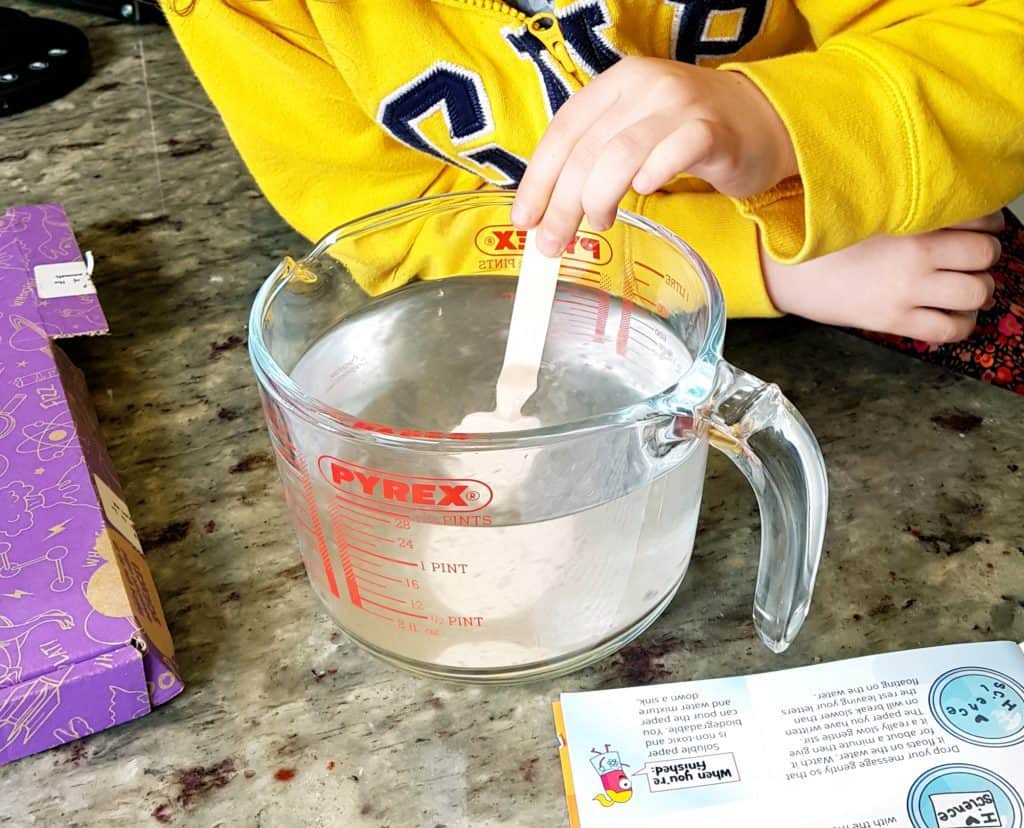 It’s not really easy to picture, but in the box was a piece of paper, but when you put it in water it dissolved! This was related to Polymers, which we also learned about in Box 9.

Regardless of the scientific details, it was very cool to see what looked like regular paper disappear in water! 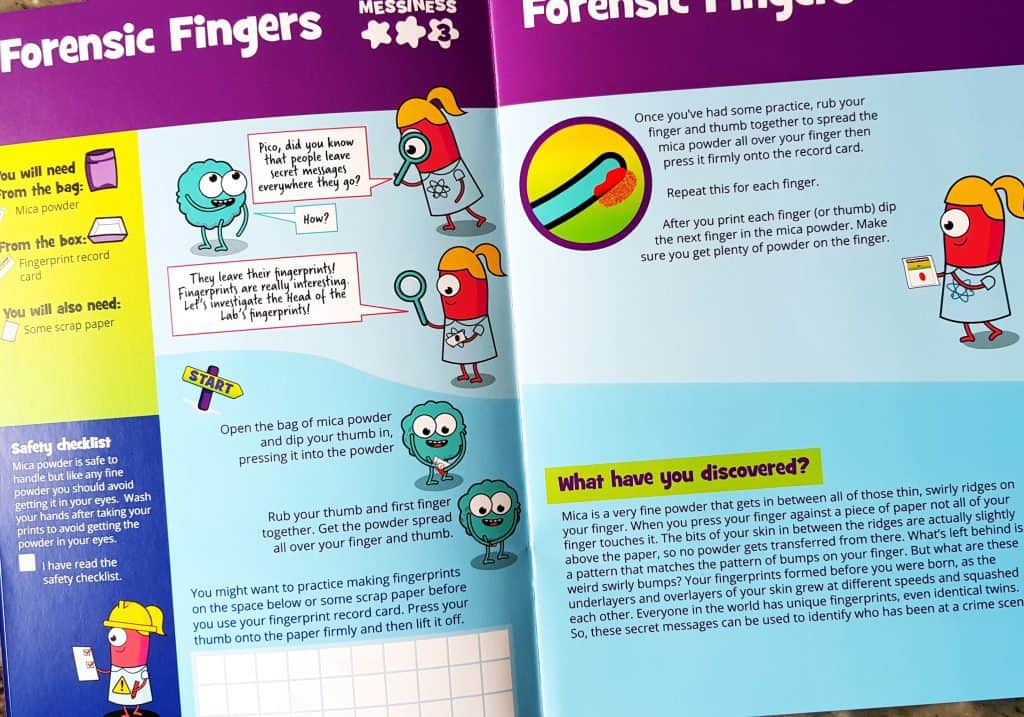 Next was Forensic Fingers. 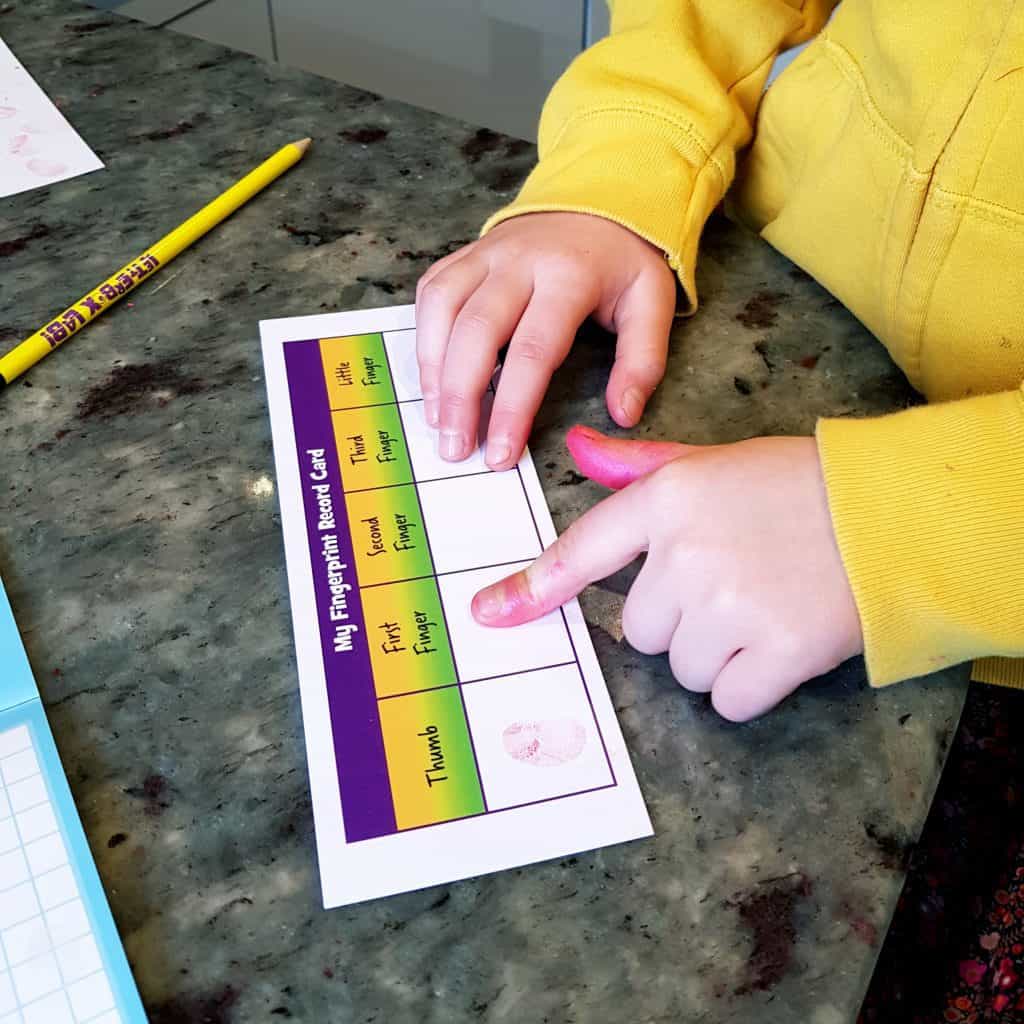 We used the pink mica powder to make fingerprints and examine the different patterns they made. We also learned that each fingerprint is unique! 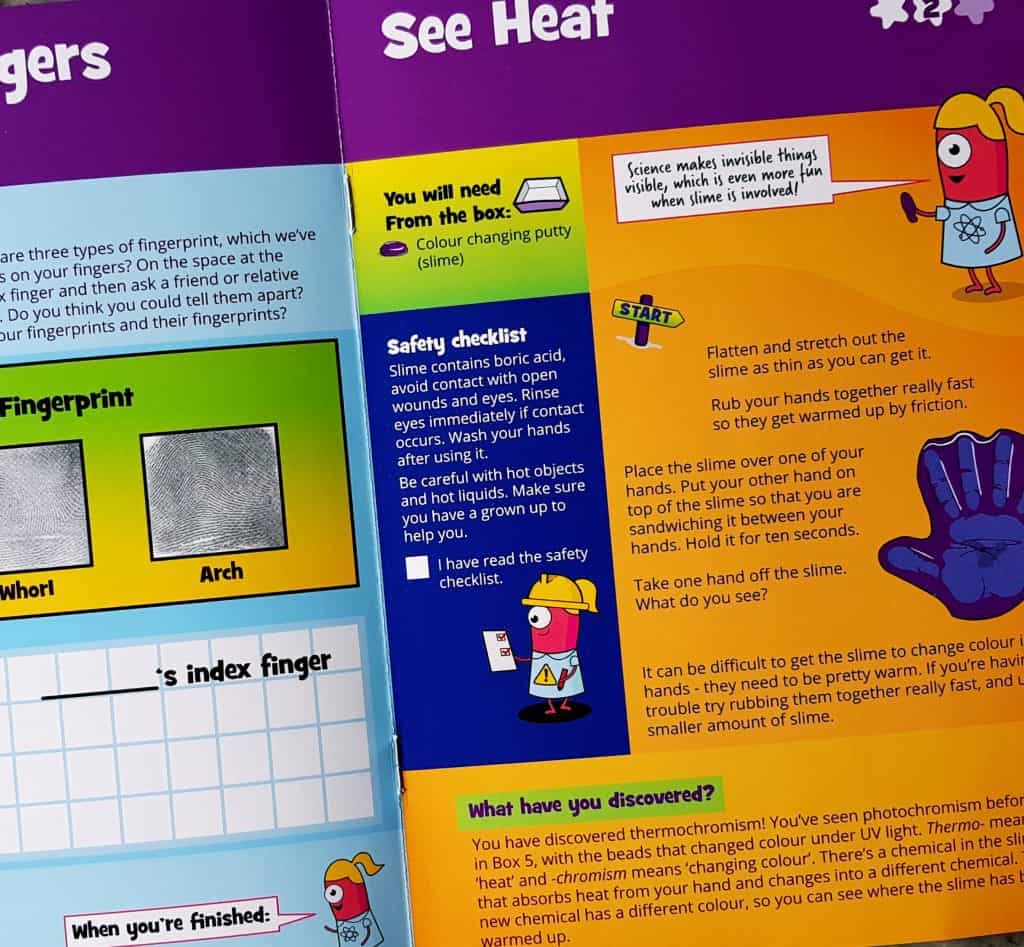 The next one, See Heat, was very effective.

A pit of color changing slime was  included in the box, and first we tried to warm it up using our hands. 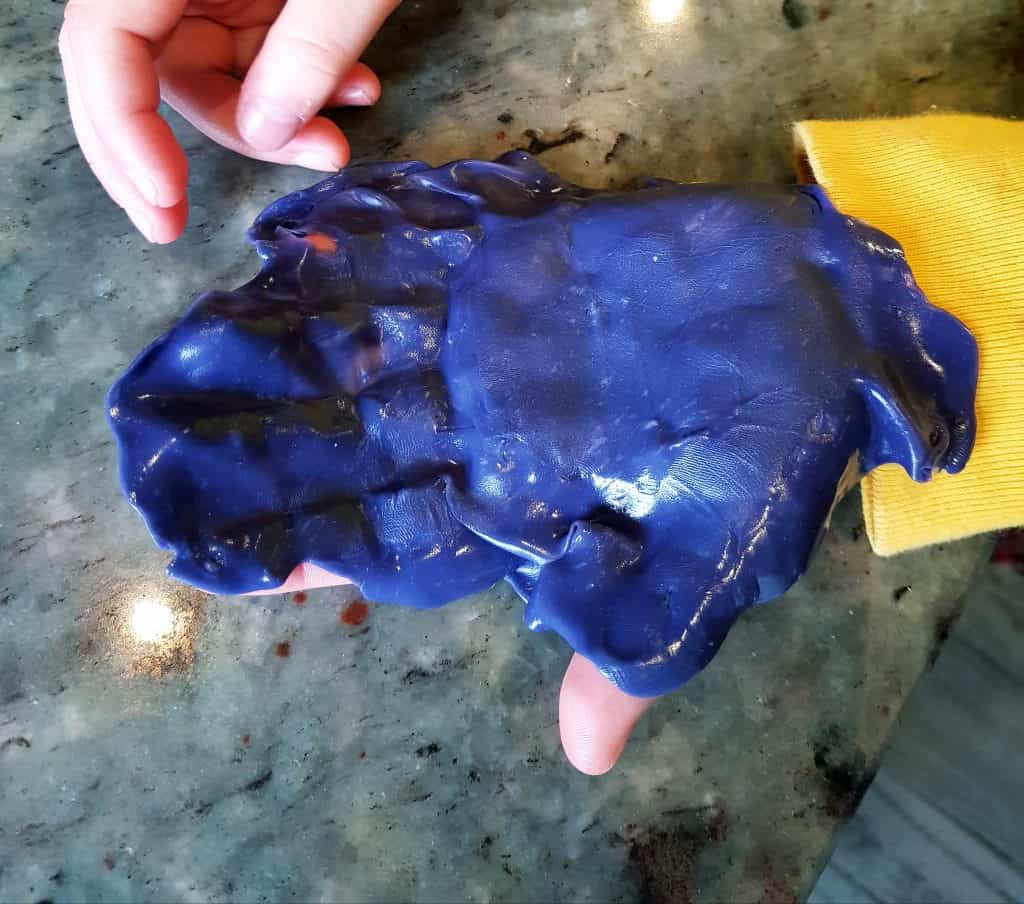 Like it said in the instructions, it was difficult to get it to work with just your hands. 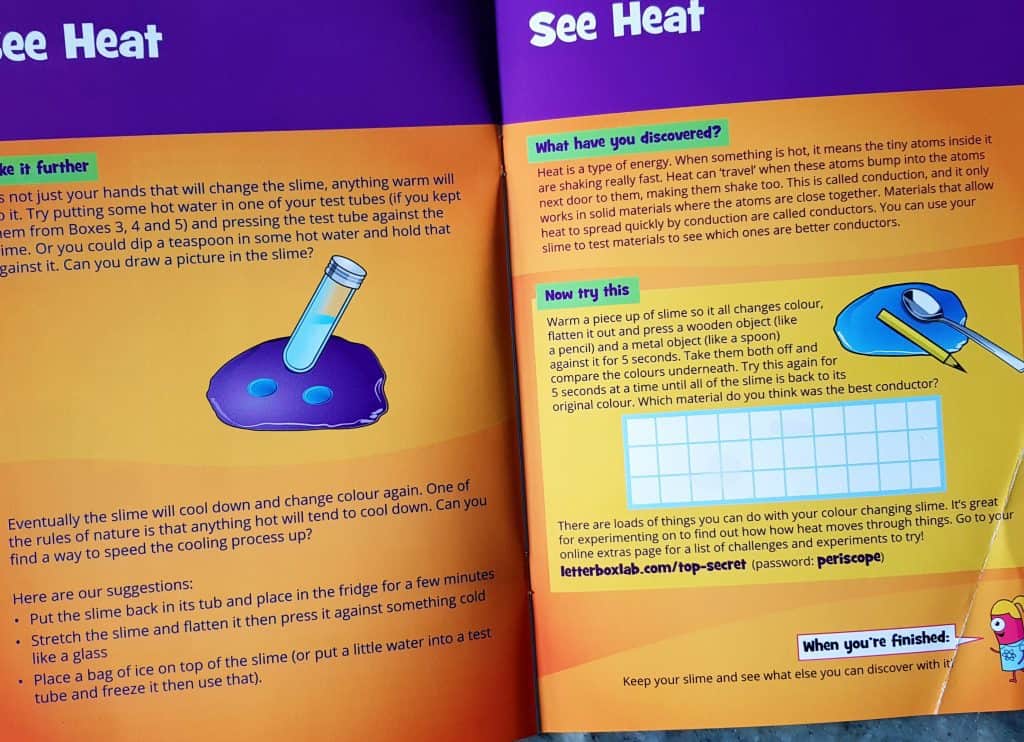 But in the next part, we decided to warm up a spoon in hot water and see what happened when we pressed it on to the slime. 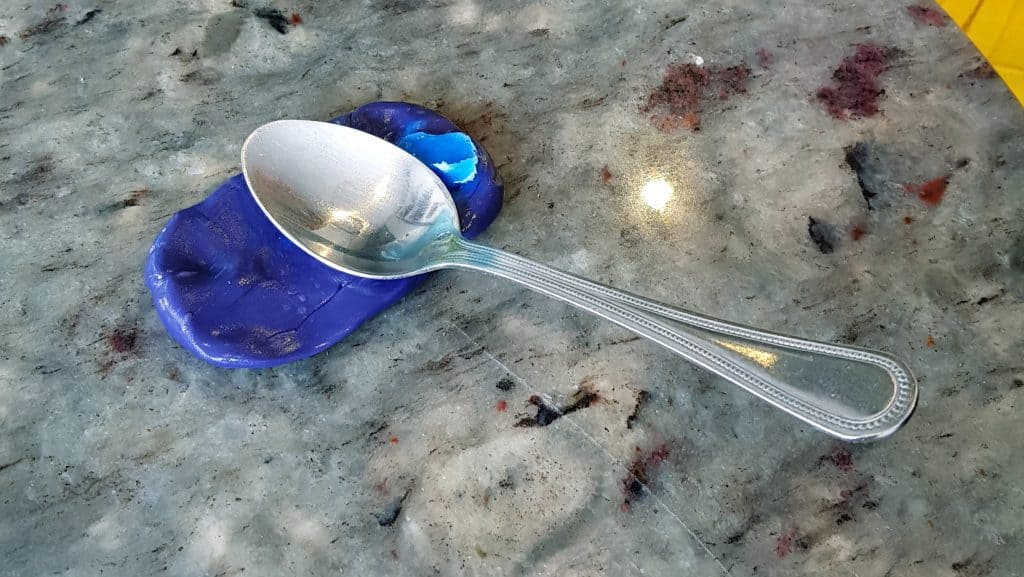 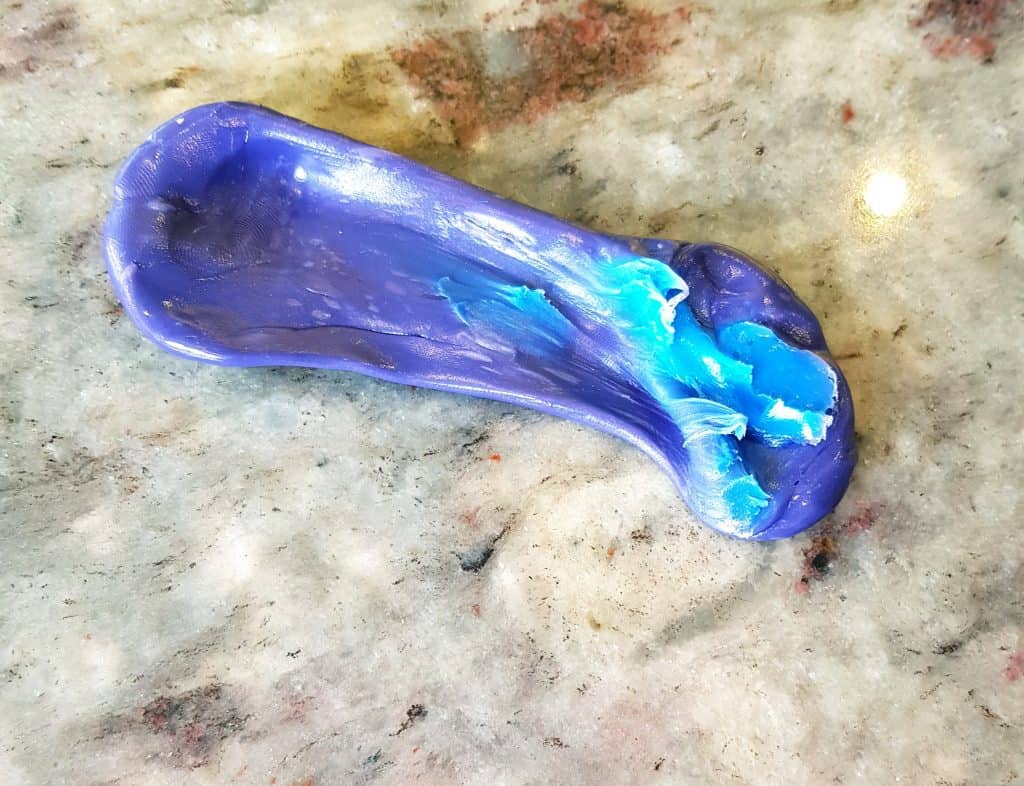 It worked! Can you see the bright blue against the purple? It looks a bit odd because the spoon stuck to the putty a bit, but you could see the colour change really clearly! 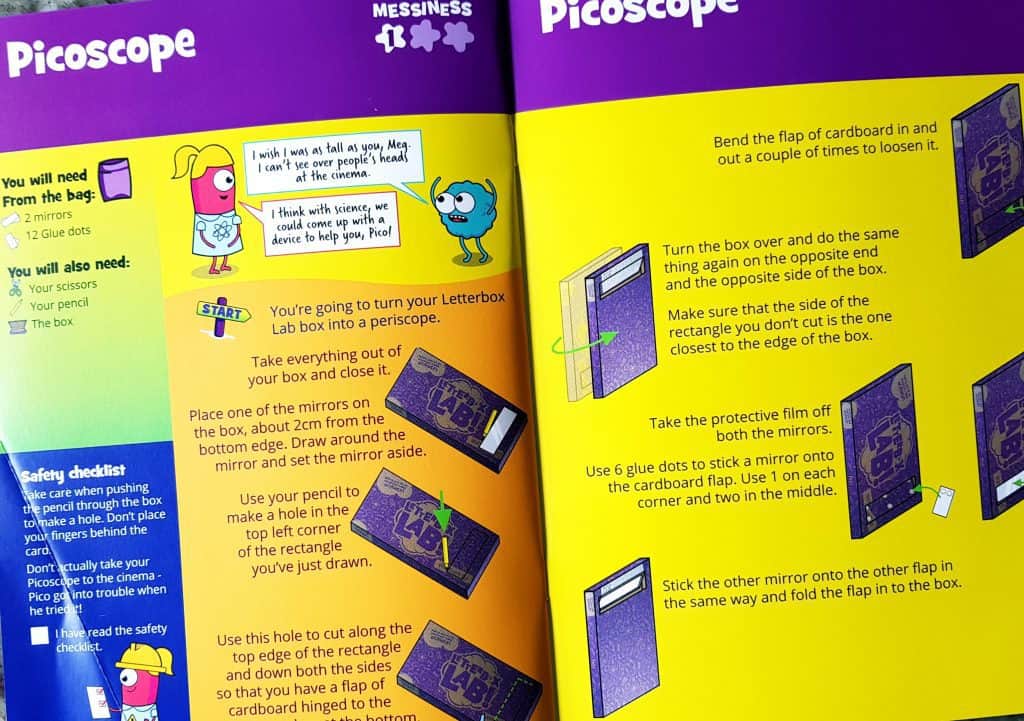 The last activity used the box to make a periscope, or rather a Picoscope! 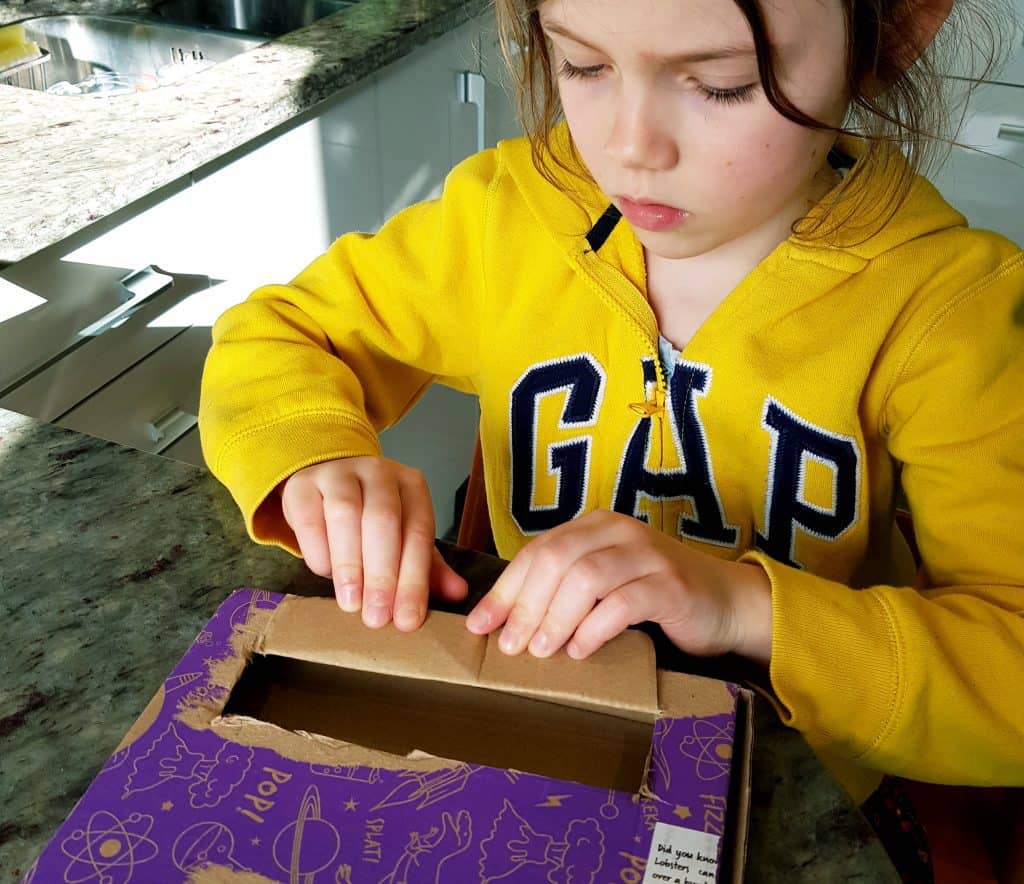 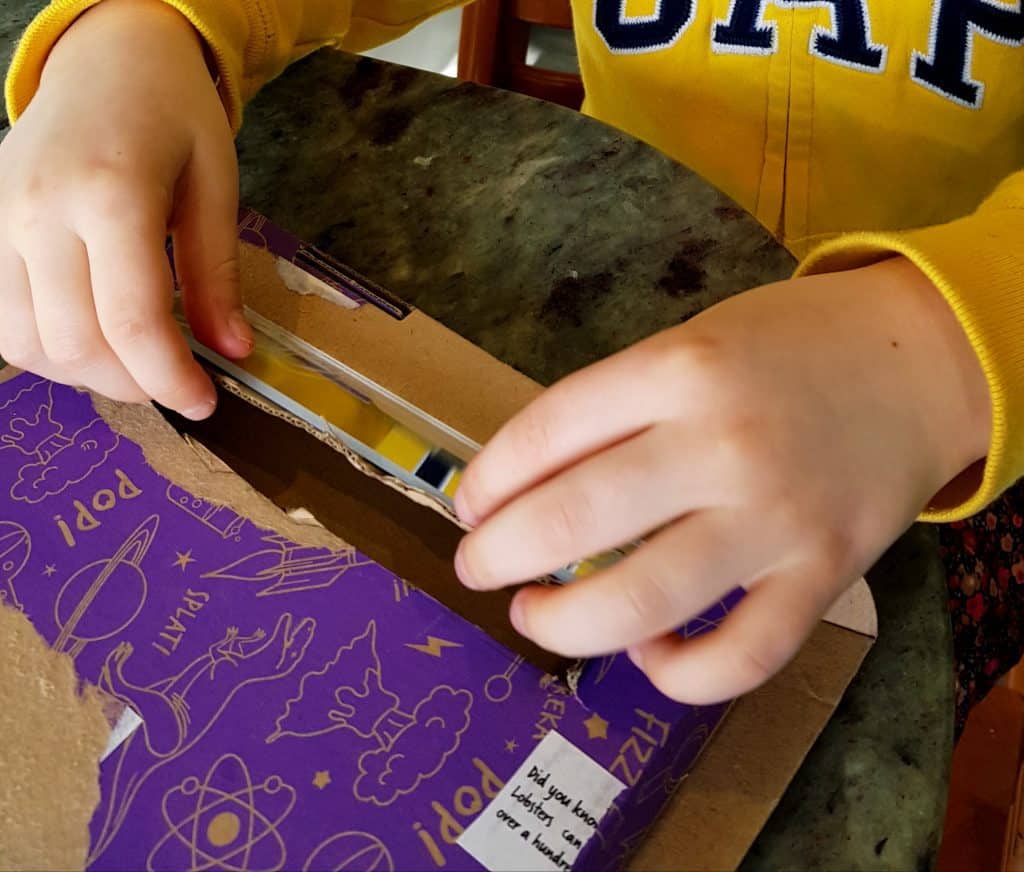 I cut the pieces out of the box, as cutting cardboard can be quite tricky, and then Little C stuck on the mirror pieces. The mirrors were made from plastic so totally safe! 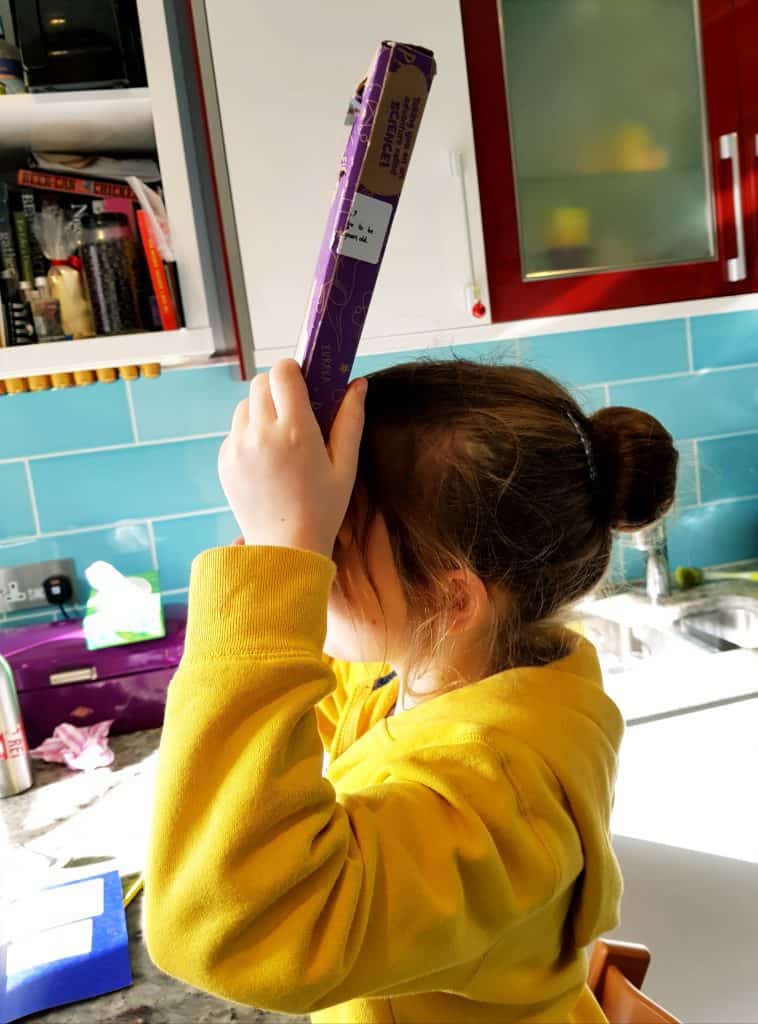 And there it was! Little C knew exactly what it was supposed to be, as apparently there is a periscope at her school they can play with! It was a lot of fun making one, though, as it means you can see exactly how it works!

This month’s box was interesting, though the standout item was definitely the colour changing slime. It was very easy to get a really good effect, and also to experiment with different items to see how different items created different effects.

The dissolving paper was a lot of fun as well, and we decided it would be an essential part of any spy kit!

The fingerprints were interesting, though the mica powder didn’t work quite as well on the shiny fingerprint chart paper as it did when we tested it on regular printer paper. But the colour and the shininess of the mica were certainly very appealing.

I really like it when the box is used to make something else, and the periscope, while nice and simple to make, worked very well.

While this month’s set of experiments weren’t quite as spectacular as some previous months, there was plenty to play with and talk about, and the slime is definitely something that we will keep around to play with!