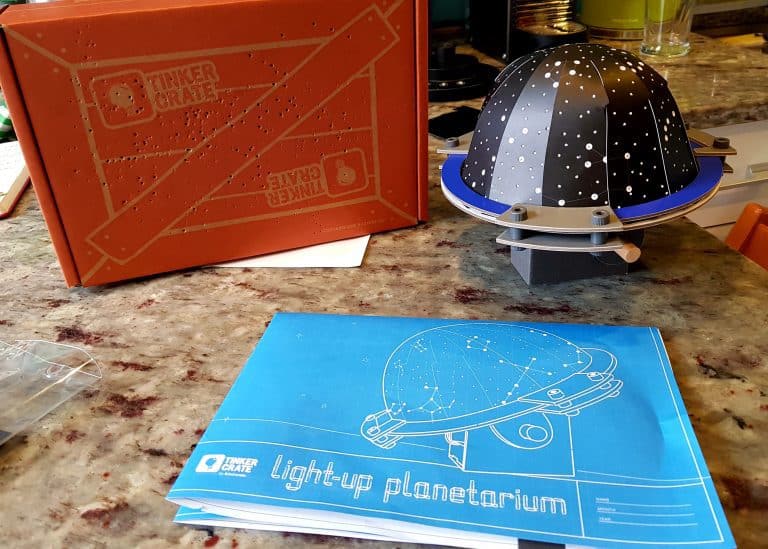 KiwiCo creates amazing hand-on projects for kids in various age groups. This is Tinker Crate, which is focused on science and engineering for kids age 9- 12. 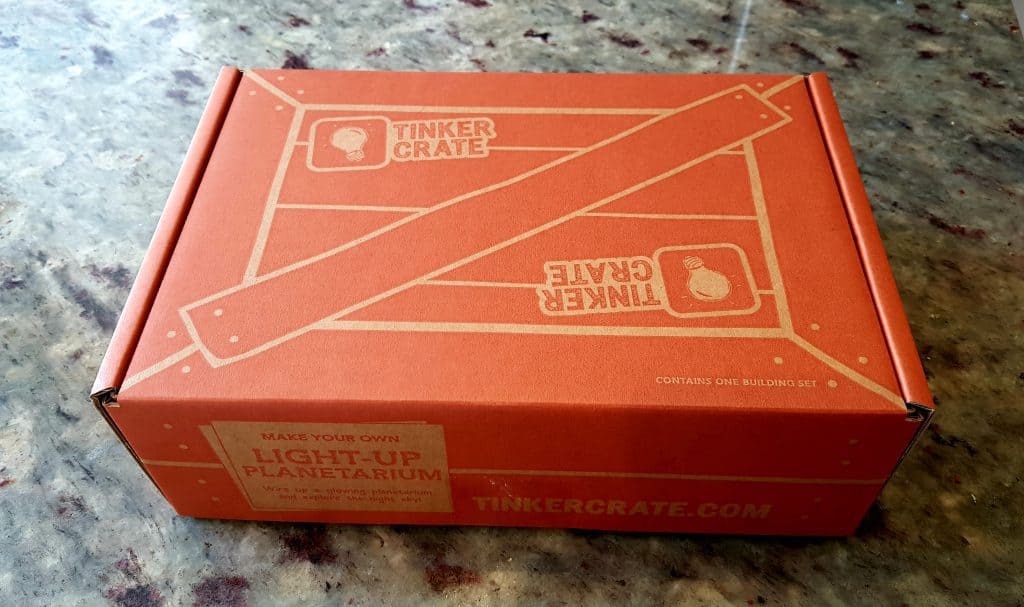 Little C is actually seven, so slightly below the official age range, but I figured that a bit of adult help would likely be necessary anyway, plus I was rather interested myself! She is also very keen on Lego, so has had lots of practice at following instruction books. 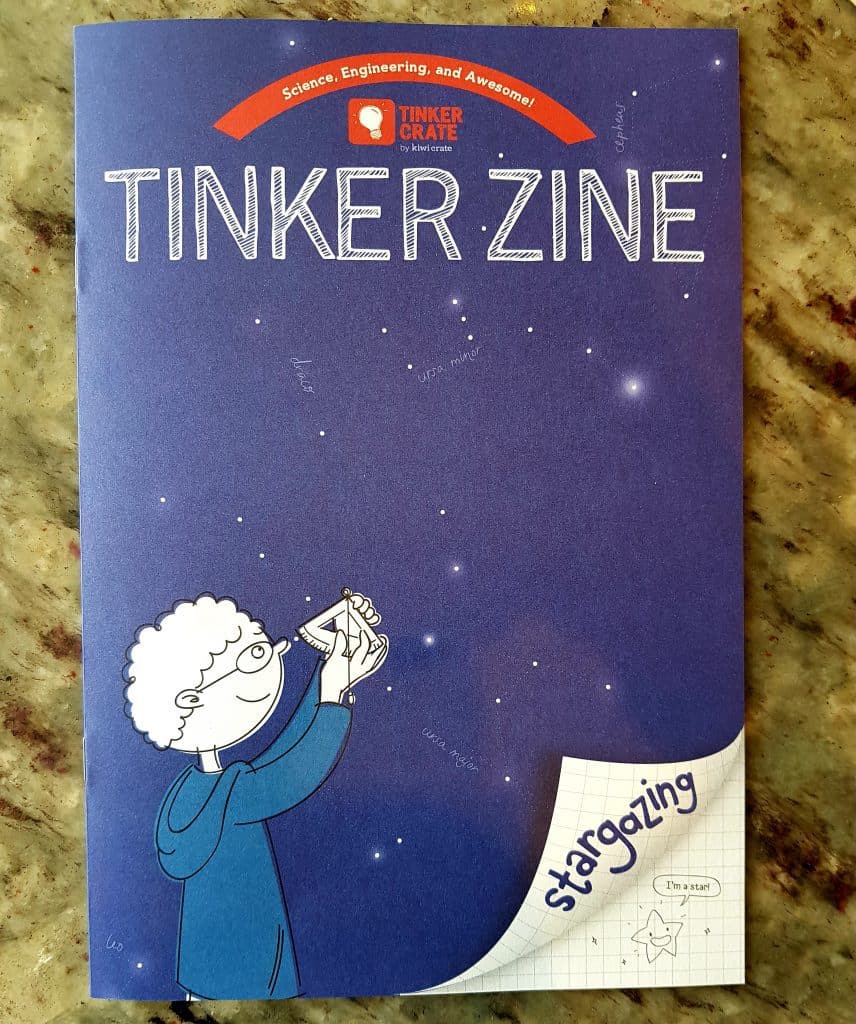 Included in the box was a magazine, which tells you about the box project and theme, plus some further information. 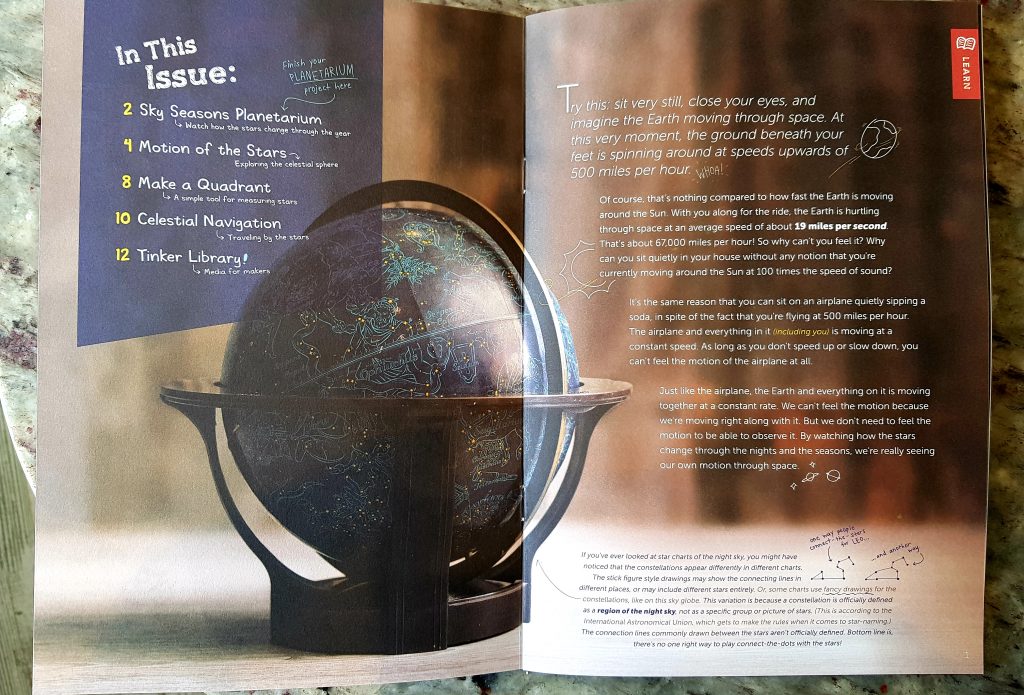 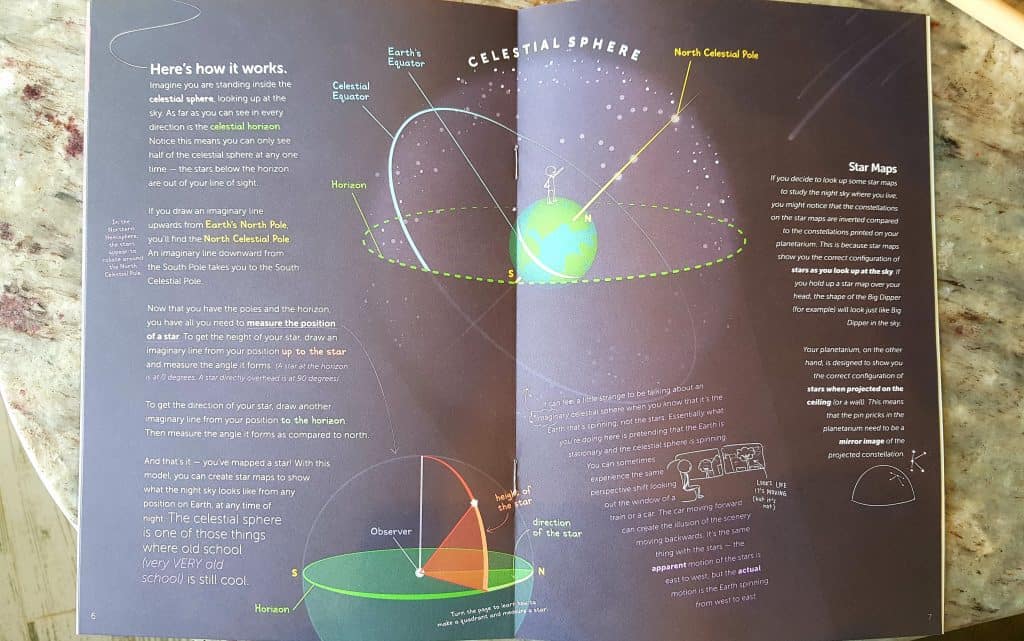 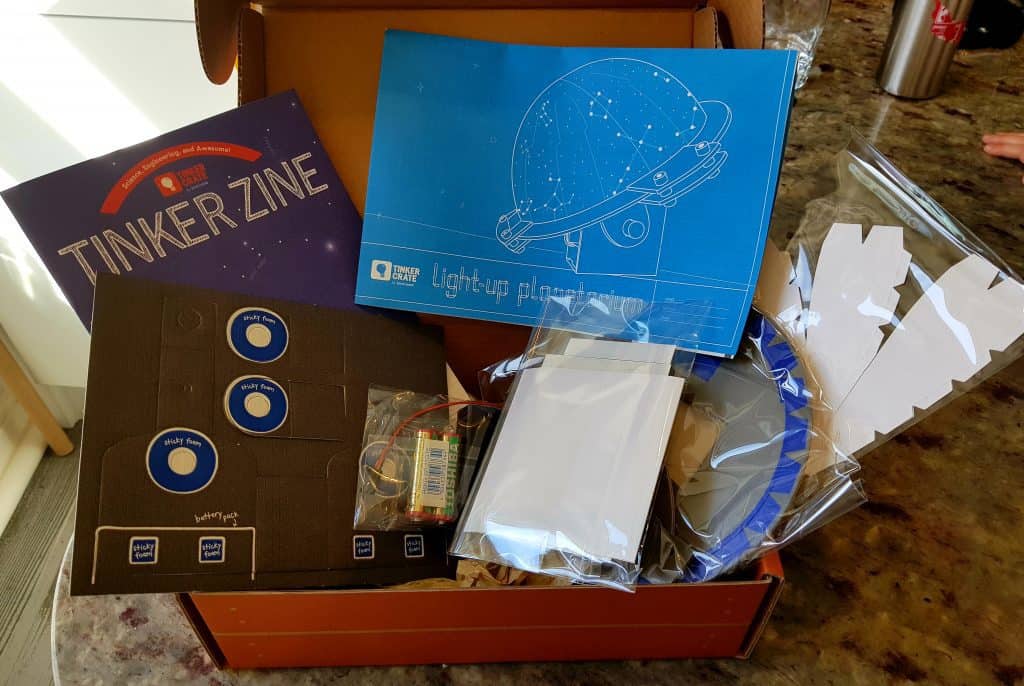 Lots of pieces in the box! 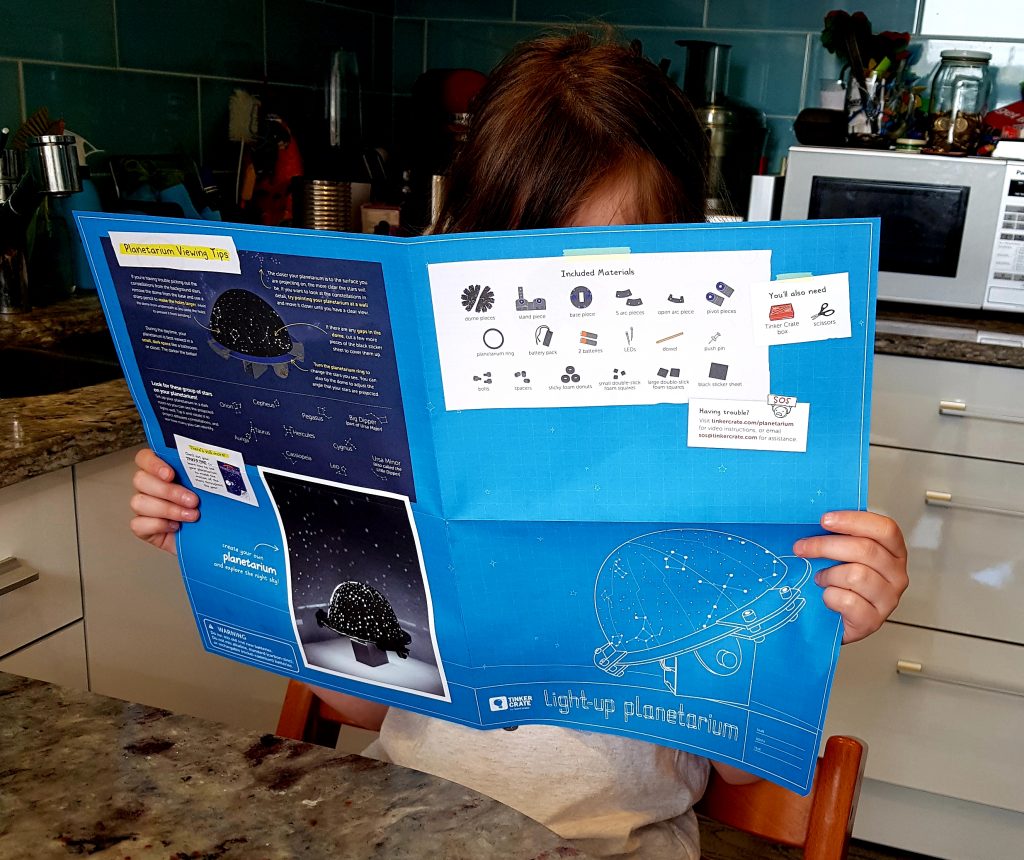 This was the instruction sheet. 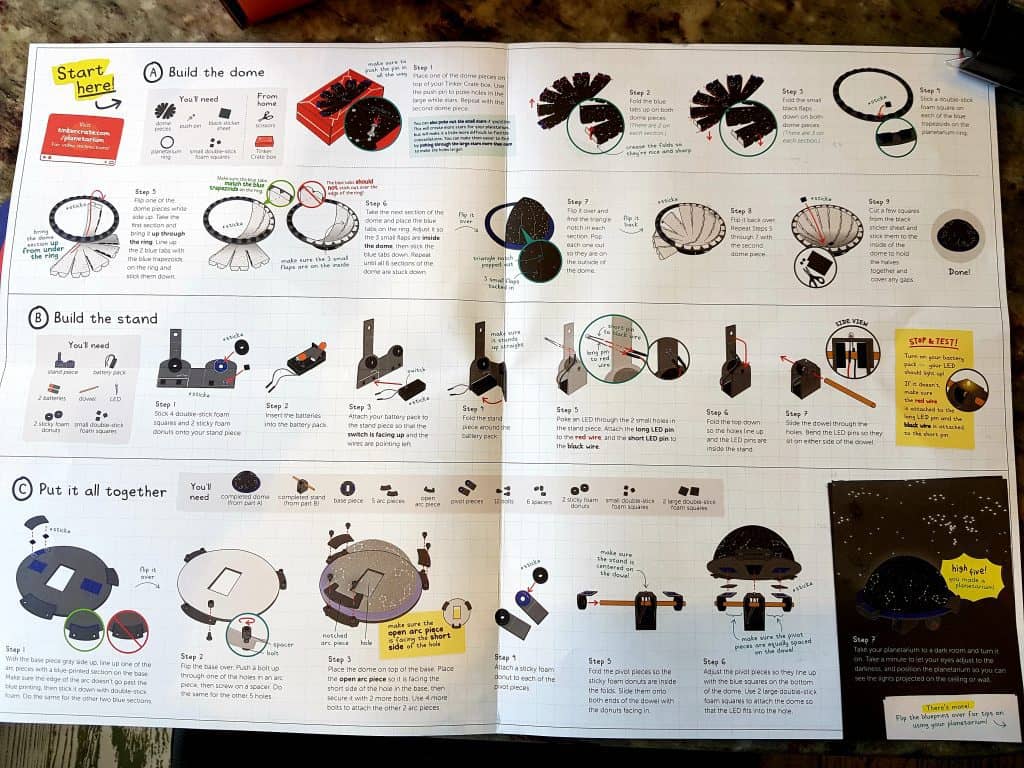 It’s very clear and well illustrated, and there’s a lot to do! 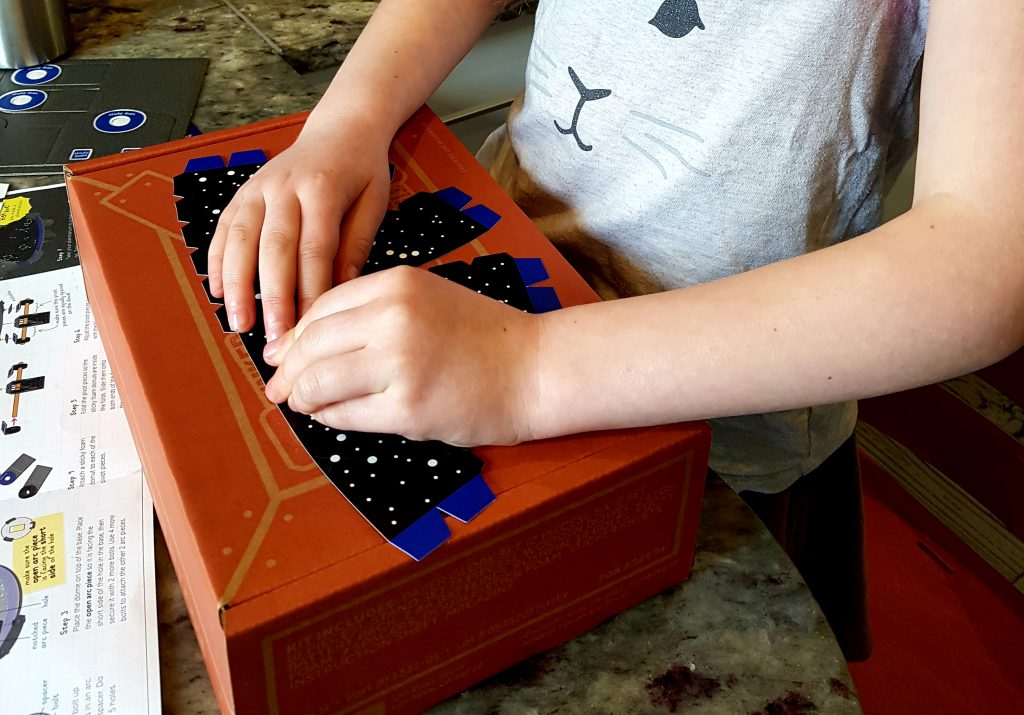 The first thing was to make the holes for the dome. There was a pushpin in the box, and then put the done shape on the box. It took quite a while to make all the holes, including bigger holes for the constellation. I helped with quite a lot of this, and even I found it quite hard going! 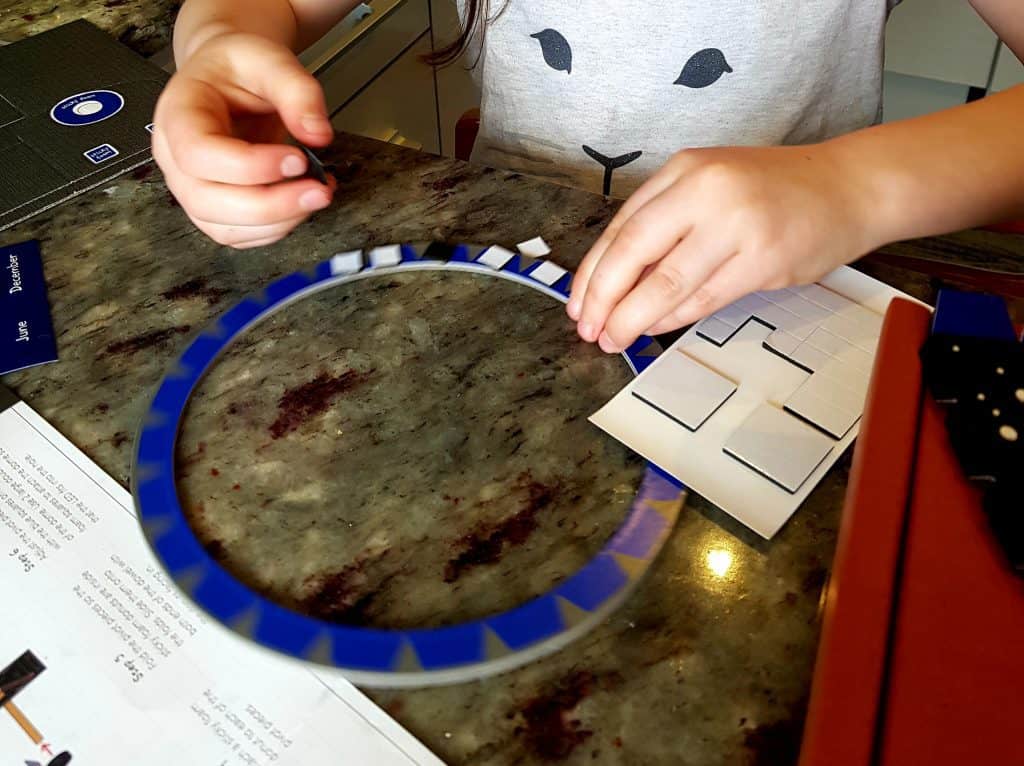 Anyway, once all the holes were made, it was time to make the done itself. There were sticky pads to use, and the tabs on the dome pieces stuck down to each of them, in the blue shapes for the correct placement. 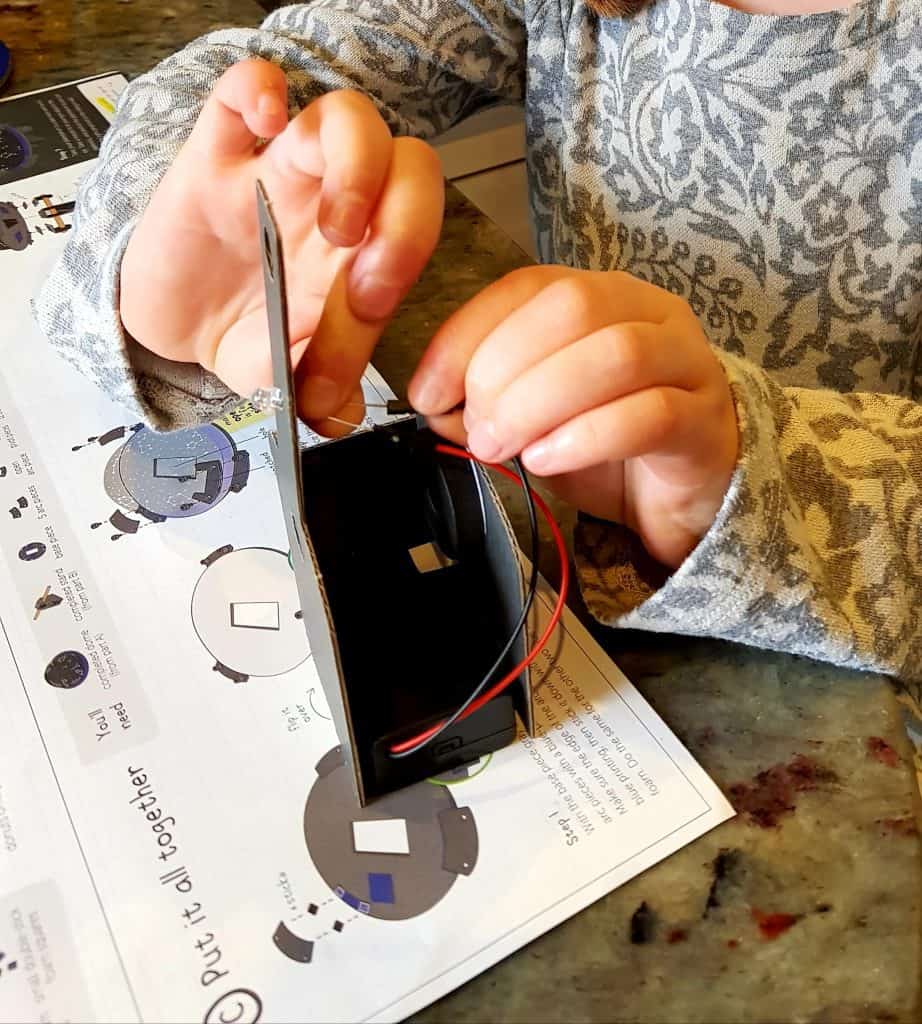 Once the dome was completed, it was time to make the base. More cardboard pieces, one of which held a battery switch pack. Into this piece was placed a little LED bulb, and then hooked up to the battery pack. The holes in the stand weren’t quite big enough for the LED bulb wires, so I used the pushpin to make them a little bigger. 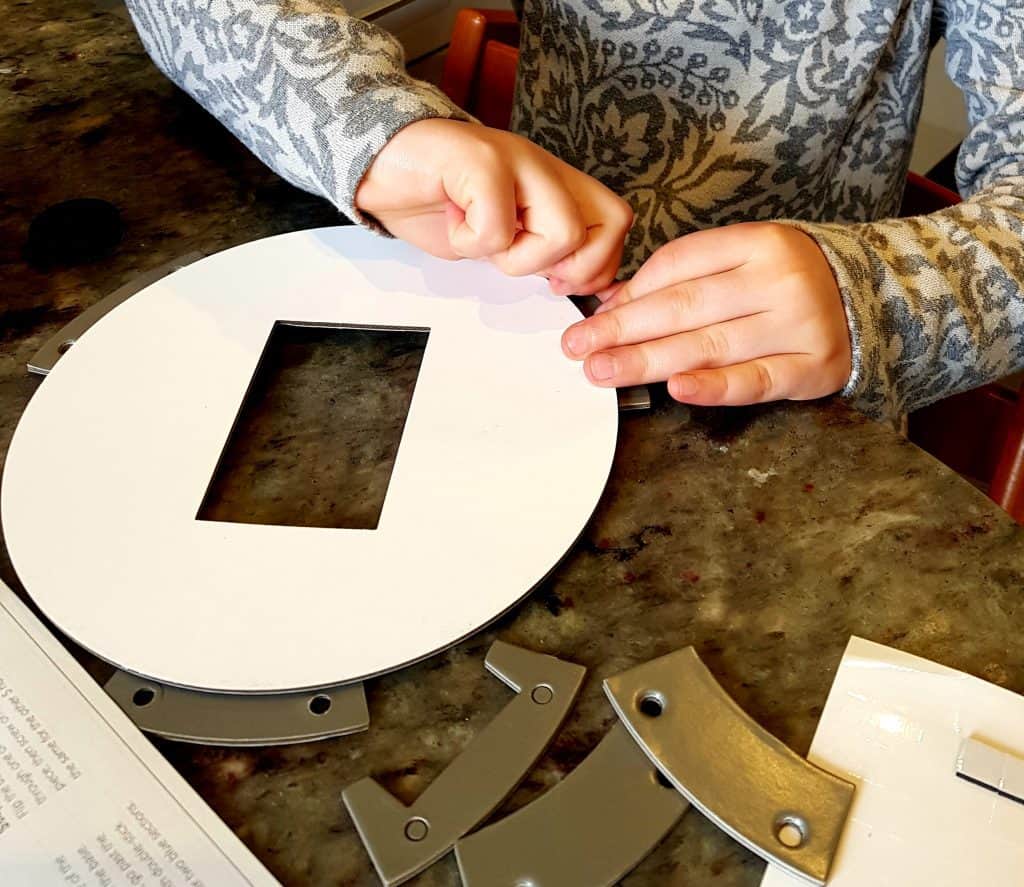 The base of the dome was made by attaching more pieces, first with more sticky pads and then my little plastic screws and spacers. The dome was fitted in and screwed down, and it was finished! 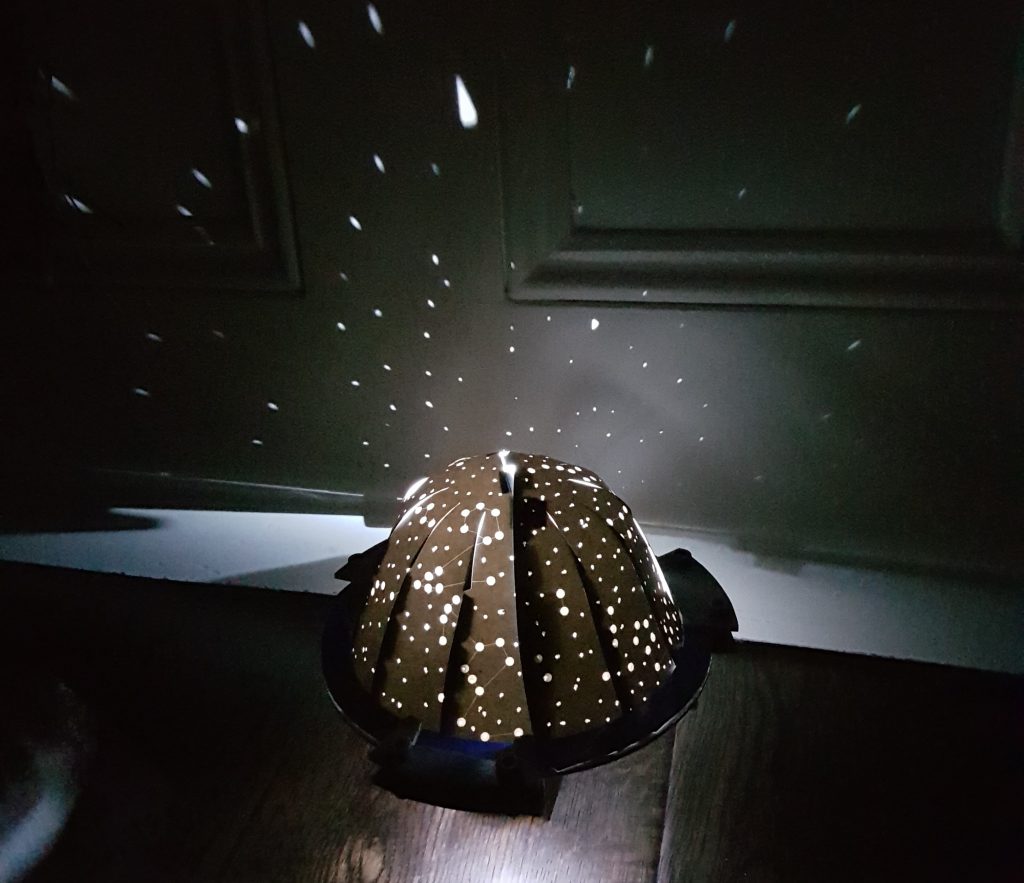 We actually did this in two different sessions, the first one making the dome, and the second making the stand and putting it all together.

The most difficult part was putting the holes in the dome. It was very time-consuming and repetitive, and I have to admit that even I felt a little frustrated!

However once we got started on making the stand it all got much easier. As I said, the instructions were very easy to follow, and apart from some assistance with making sure things were fitted in precisely, and getting the LED wires through the cardboard, Little C was able to figure out what to do pretty much alone.

Once the bulb was hooked up to the battery and switched on, it felt much more inspiring! And as for the finished result, both Little C and I absolutely loved it!

I was incredibly impressed at how effective this is. All the pieces fit together perfectly, and the instructions are extremely clear.

The kit itself is incredibly ingenious. It has been beautifully and cleverly designed, and every single piece works as it should. The only slight change I had to make was bigger holes for the bulb wires.

Although Little C is a bit below the age range, she likes building things very much (there is lots of Lego in our house!) and I think it is pretty manageable for a child her age with an adult on hand to help out. We have also visited a planetarium a couple of times, so Little C knew exactly what it was and how it worked before we started.

KiwiCo comes from America, and costs around £27. While it’s not a cheap activity, the quality is superb, and the model is not something to be thrown away. It can be kept and used for a long time.

It has great educational value, and there is great satisfaction in building something to keep that actually works!

If your child likes visiting science museums, this will certainly appeal! It is wonderful for anyone who likes putting things together,(and is organized enough to follow instructions) and I know adults will certainly enjoy it as well. Both Little C and I loved it!