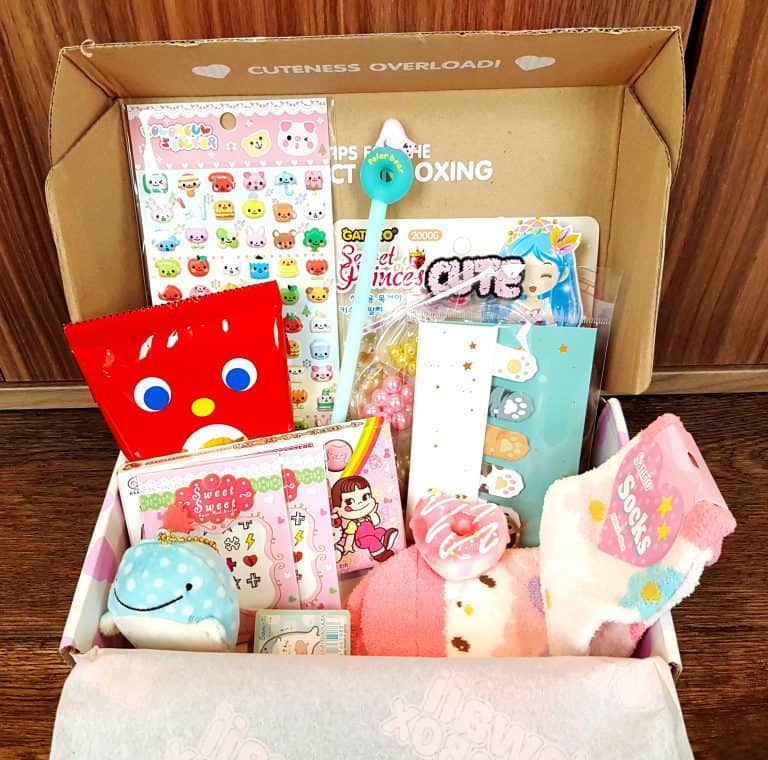 Kawaii is the quality of cuteness in Japanese culture. It can be applied to almost anything, and frequently involves little cartoon characters or animals. Hello Kitty is probably one of the most famous examples of kawaii. I won’t digress into an essay on the concept, but it’s actually worth a few minutes looking it up on Wikipedia, because it’s extremely interesting.

The Kawaii Box is a monthly subscription box, shipping directly from Japan, containing 10 – 12 cute items. Stationary, keychains, accessories, sweets, anything that can be made cute! Shipping is free worldwide, which is pretty damn good, and you will get a nice selection of cute stuff.

I was kindly sent the February box, and I had to make sure I opened it away from my daughter, Little C, because she was fascinated by the box and extremely keen to see inside. But as I wanted to investigate and take pretty pictures undisturbed, I got to it while she was at school.

The box is slightly too big to fit through the mailbox, but then that’s pretty normal with subscription boxes. It’s sent from Japan, but the tracking service is excellent; you get a tracking number by email and you can follow it all the way to delivery. Very impressive. 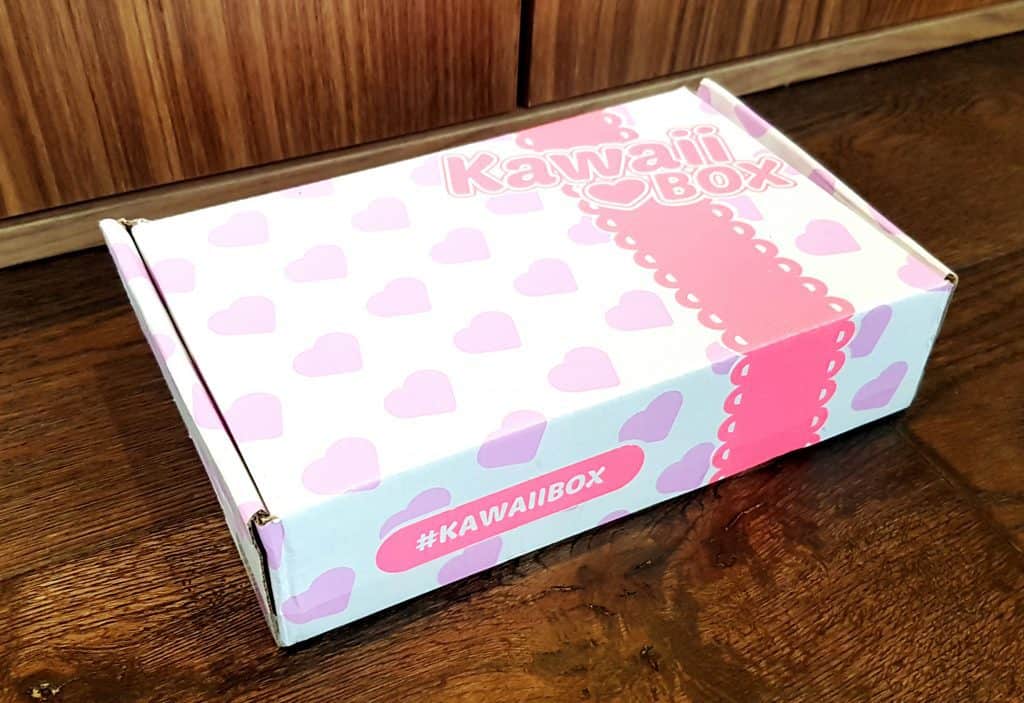 The is pretty (no surprise my daughter was so interested in it), well branded and reasonably sturdy. The only problem was that it was actually slightly squished:

It wasn’t a big deal at all, nothing inside was remotely damaged, and it’s come a very long way. It was also very light, and I suspect light things get chucked about a lot more by mail carriers than heavy things. The box shape/structure is identical to pretty much every other box of its type, and this is the first damaged thing I’ve every received, so I’m sure it was an aberration. 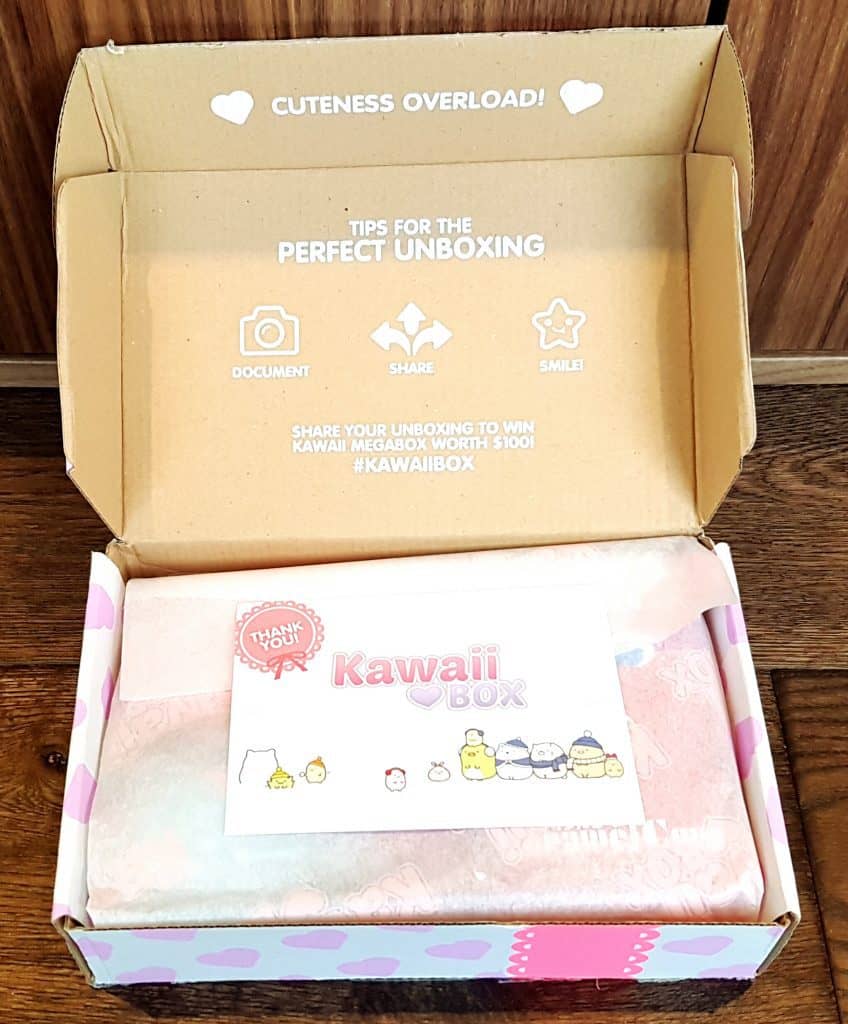 A nice cute start! Branded tissue, and the card on top, I realised quickly, was a menu on the other side. I never look at menus before looking at contents as I like to be surprised, though I do appreciate the presence of a menu. 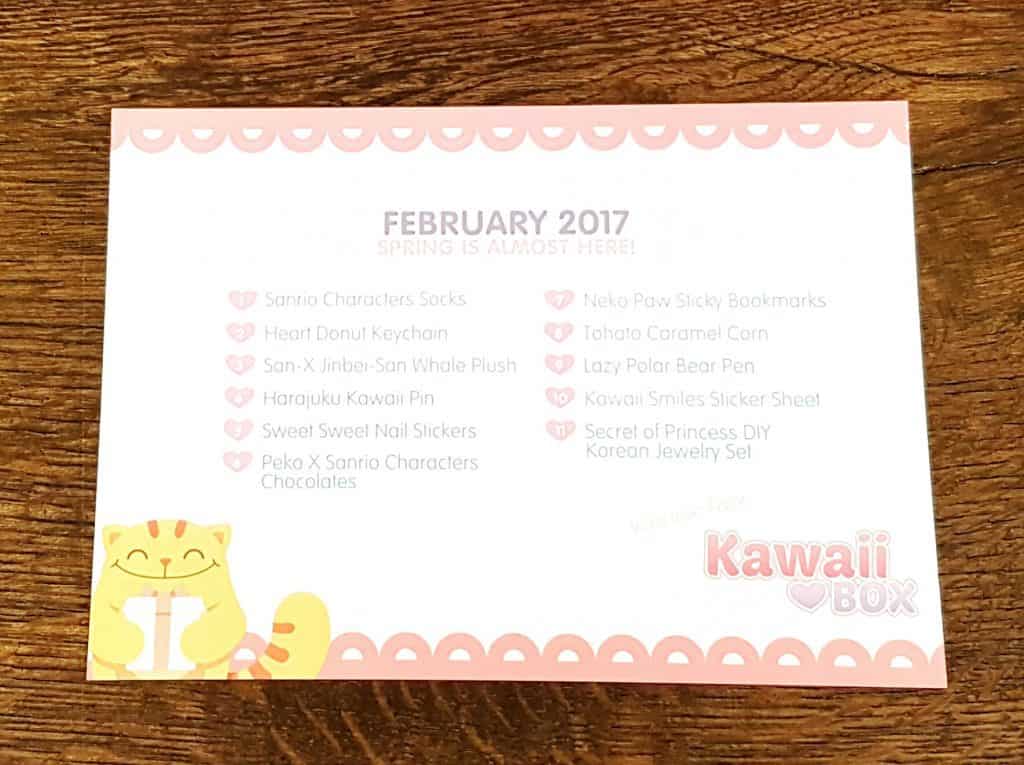 I’m sorry, these damn pictures are incredibly pale, I have no idea why. I hope they’re at least vaguely visible.  Anyway, let’s open it up. 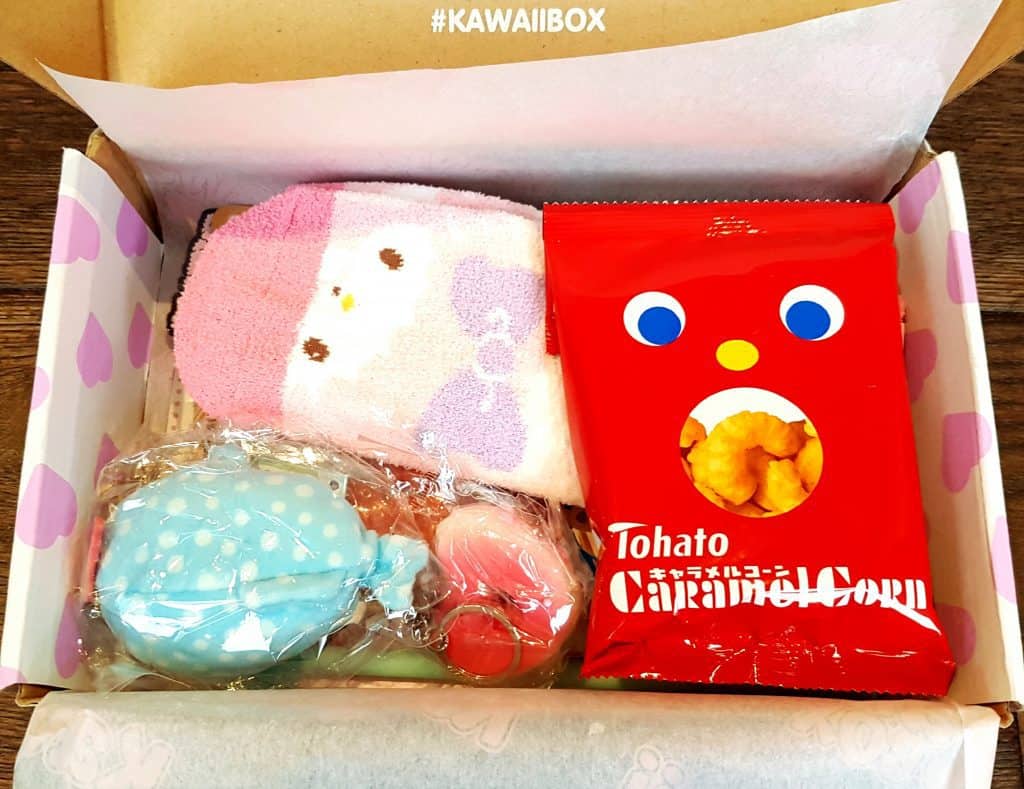 That face on the right is quite startling! But I’m seeing fuzzy things, which is a great start to something cute. 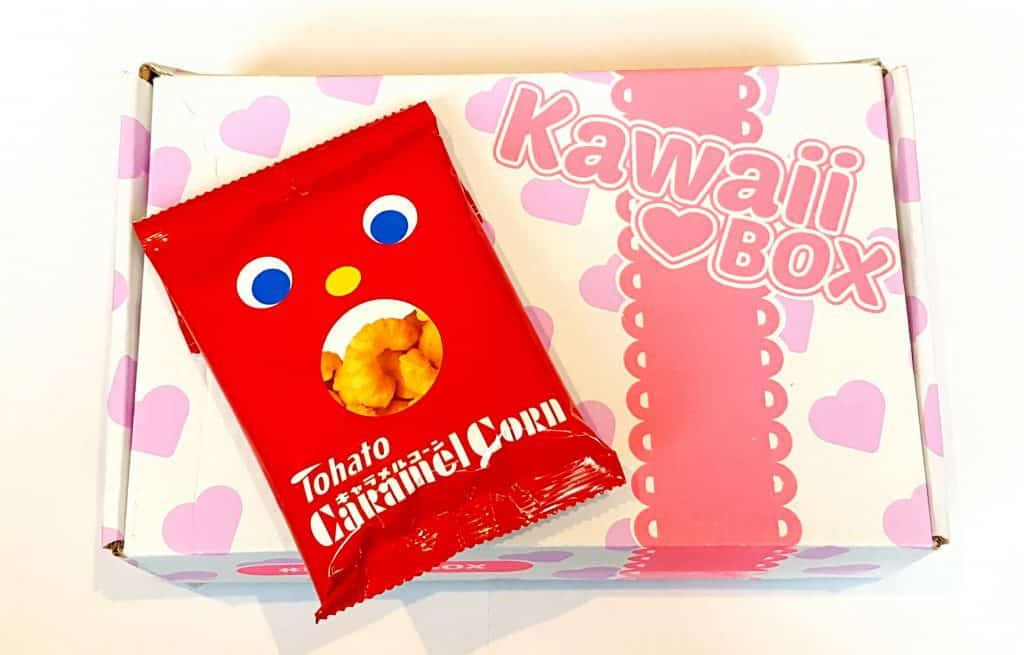 It took me a moment to figure out what the writing read! Now, when I think of caramel corn I think of caramel popcorn, right? However that isn’t what this is. And I am aware the picture looks nothing like popcorn so that should have been blindingly obvious. Anyway, my daughter and I shared this for pudding after supper, and it was delicious. The best way I can describe it was sort of like little bumpy Wotsits (which, incidentally, I do not like) but tasting of caramel. They were light, crispy, and melted in the mouth. They were also not excessively sweet. Despite their brilliantly coloured packaging, not really matching the pastels of the rest, they totally count as cute with that funny face. And yummy. It was great to try something completely different. 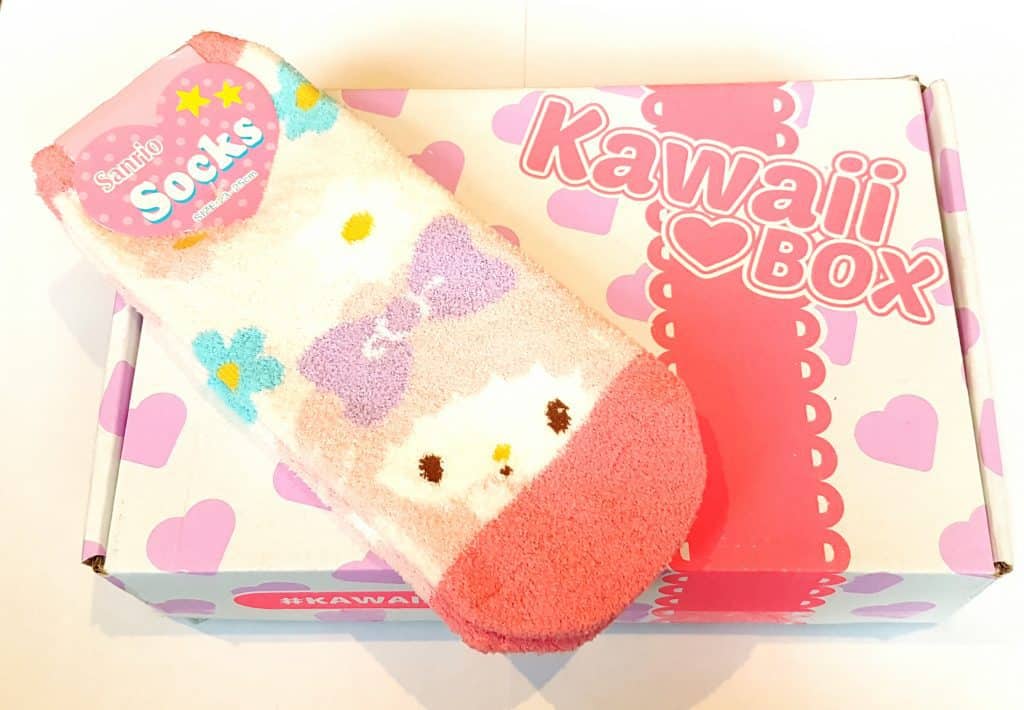 Fluffy socks! The character on them is Charmmy Kitty, one of the characters from Sanrio, which licenses many of the most famous kawaii characters. They are soft, cuddly, and, much to my daughter’s disgust, fit me perfectly. I may, however, allow her to borrow them. 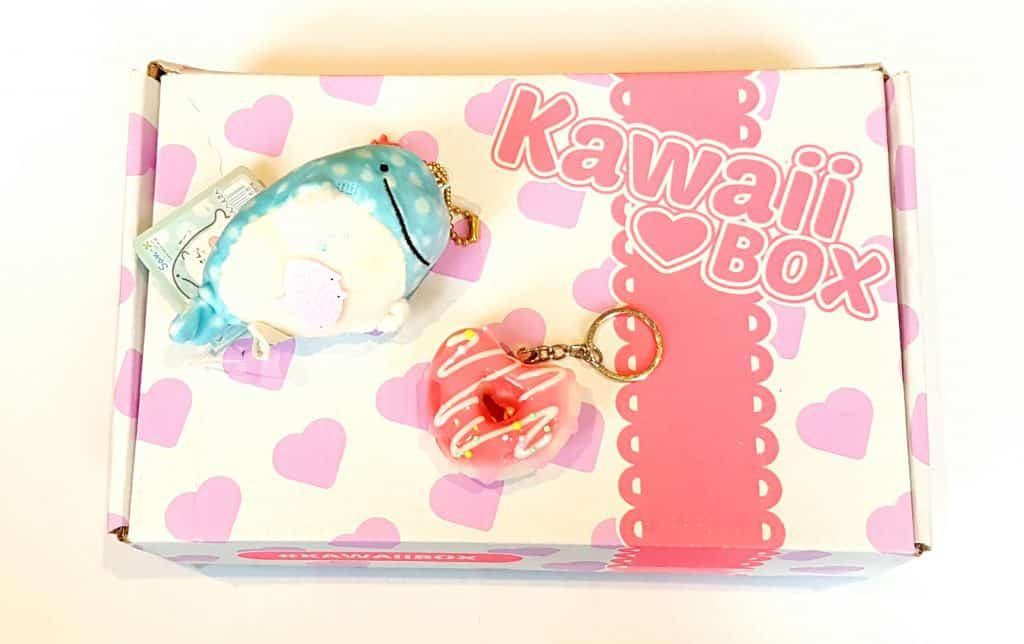 Soft soft things. Again, this picture’s not great, but that little guy on the left is possibly one of the most adorable things I’ve seen in a while. It’s a plushy whale charm, and (might not be able to see too well) he has a little ray friend on his tummy! And the most adorable expression on his face. I love him. The other thing is a heart doughnut-shaped keychain. This one was the only thing that disappointed me. While the whale is lovely quality, the doughnut feel very cheap; it’s sponge with rubbery ‘frosting & sprinkles’ and I suspect the chain part won’t stay attached too long. It also smells weird. Funnily enough my daughter adored it immediately, and has appropriated it. She even preferred it to the whale. I cannot fathom the mysteries of a six-year-old’s preferences. 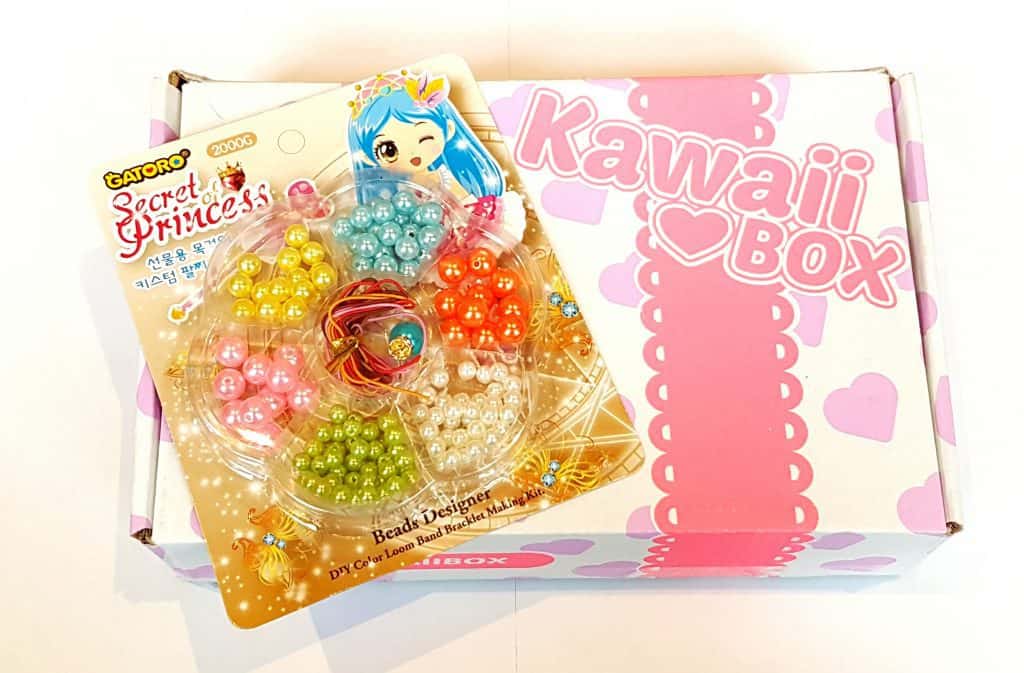 A little set of beads with lengths of elastic to make your own jewellery. My daughter looked at me with beseeching eyes and said ‘Mummy, do you want this?’ Of course I let her have it, and by suppertime she had made a necklace and bracelet. I have to say that, though naturally it’s not something I would wear, the necklace and bracelet looked really nice (in a kiddy way of course) and perfect for the childlike connotations of kawaii. 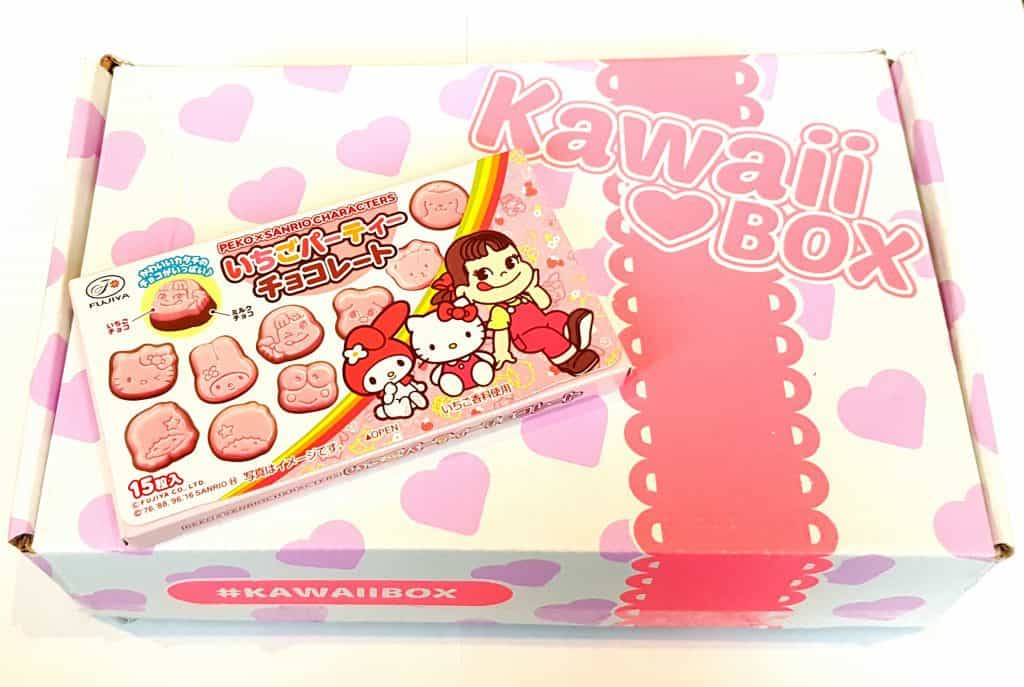 More munchy things. These are little milk chocolate and strawberry candies, in more of those Sanrio character shapes, including Hello Kitty and pals. Very cute! 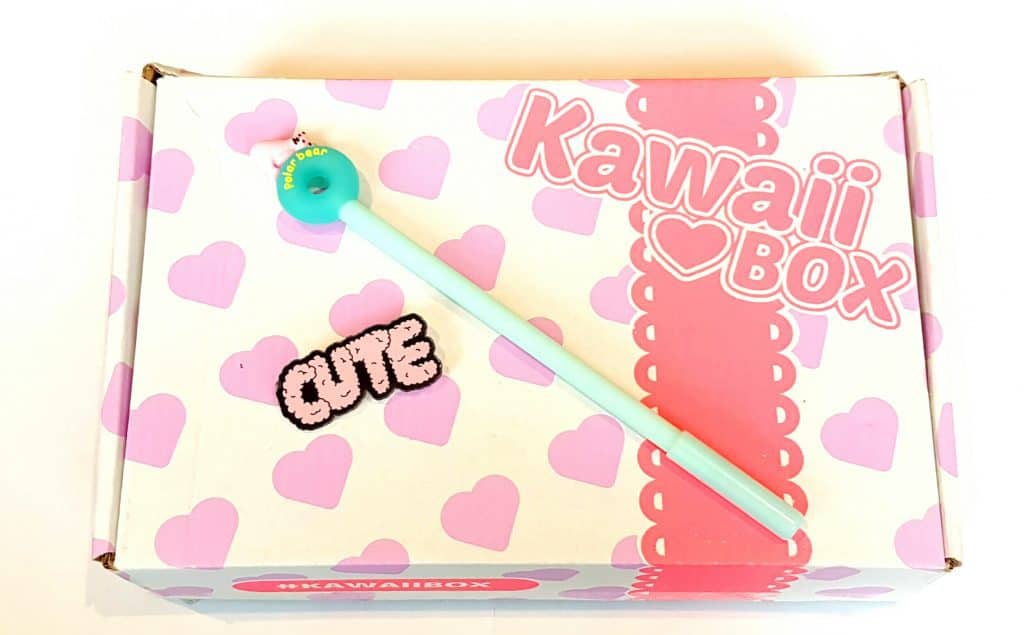 A little pin badge, and a pen with a little polar bear sitting on top. The pen writes surprisingly nicely, and I will not be giving it to my daughter. It will be going into my handbag, and she can have the badge instead. She has way too many pens and stuff anyway, and I don’t want her thinking that all this stuff is simply for her own amusement. I certainly don’t see her diligently writing over a thousand words of thoughtful and insightful commentary. So there. 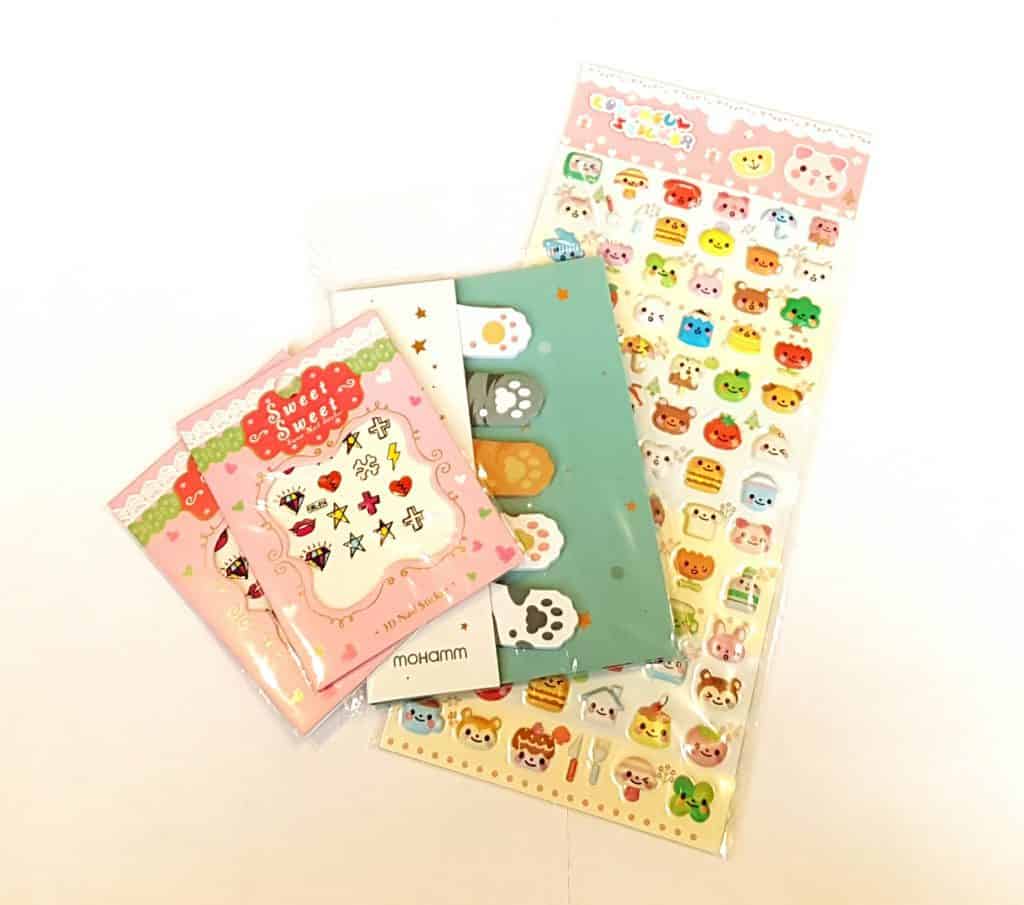 And finally, at the bottom of the box, sticky things! And by sticky things I mean things that are meant stick to other things, not spoons which have been dipped in honey, or small children’s hands.

At the back is a sheet of tiny smiley soft puffy stickers in all kinds of cute and crazy shapes. Totally adorable. The things in the middle are both cute and practical: sticky post-it-type bookmarks in the shape of a cat’s paw. So you keep your place in a book and it looks like your cat is waving at you. Or, if you’re in a darker frame of mind, like you are using a squashed cat as a bookmark. Macabre but funny. And in the midst of so much kawaii, my mind occasionally heads into the reassuringly sinister.

On top are a couple of packages of nail transfers. While I’m sure my daughter will want to use some of these (school holidays only) I will be trying them out when the weather gets warm enough for me to get my feet out.

So there they were. I must confess I felt slightly disappointed when the box was empty, as I was rather enjoying spending a little kawaii time! (Flat cats notwithstanding.) While I love scary and crazy stuff, I do have a soft and furry spot in my heart for cute things. Plus I have a small daughter who, as well as the Avengers & similar, loves the fluffy and adorable. Also, I used to live in London and often shopped in Chinatown, so I’ve seen a lot of things like these. And I fondly remember Hello Kitty from childhood (even though I climbed trees and read the Beano), and I have some sweet nostalgia going on with this style.

Now let’s talk turkey. In some of my reviews I look for individual items and compare their total prices to the box cost. I’m not going to do that here, mainly because many, if not most of these things will not be available in the UK, and certainly not in every other supermarket or shop. It wouldn’t be a reasonable comparison. You could certainly say that similar stickers/keychains/candy might cost so much, and do a detailed comparison that way. But again, I’m not going to do that, though at a snap mental approximation I would say the value is reasonable.

I reckon that collectively the items in the box would cost more than the box total. Maybe not lots more, but at the very least you’re going to be more than breaking even. So no worries with value.

The contents themselves, I like. They all fit in with the kawaii theme, and they’ve done very well with creating a nicely varied collection. While a collection of fun novelty things might seem random, apart from the general kawaii-ness, the well-balanced variety shows they really have thought about what they will put in each box. The couple of food items are especially good, simply because one could argue that stickers are stickers, but Hello Kitty-shaped strawberry chocolate is going to be harder to reproduce! All the contents have a purpose, even if they are simply for adornment. For a person who likes cute stuff, this is great. It would be a fun one-off treat, but getting different things every month would certainly be welcome! While I suspect it will appeal more to females, I think there is no particular age limit. I can imagine this being a great source of kids’ party favours and stocking fillers for children and teens. Characters like Hello Kitty will appeal to the nostalgic tendencies of many older people, and it is even inexpensive enough to be a Secret Santa or gag gift. They’re not super-high-quality items, but they’re not supposed to be, they’re cute and fun novelties. With the exception of the doughnut keychain (which my daughter loved anyway) they were all of expected quality.  The packaging is attractive and nicely branded; it’s not luxury but it’s not tacky or cheap. There are enough items in the box (mine had 12, with one duplicate, the nail stickers) that if you decided to give away a couple you didn’t like you wouldn’t feel like you’d lost out.

This is a fun box, and if kawaii is your thing it’s reasonable enough to be an affordable way to treat yourself to something cute every month. For a subscription box the price is pretty low, all things considered, and as you get a generous quantity of items it feels like you’re getting quite a bit of bang for your buck!

How would you rate Kawaii Box ? 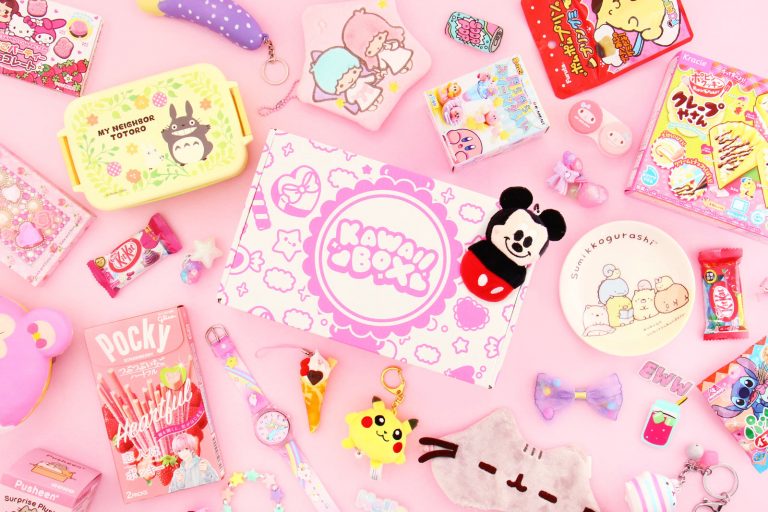 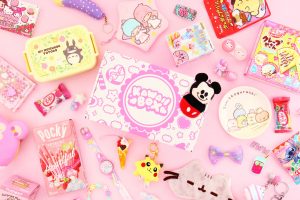