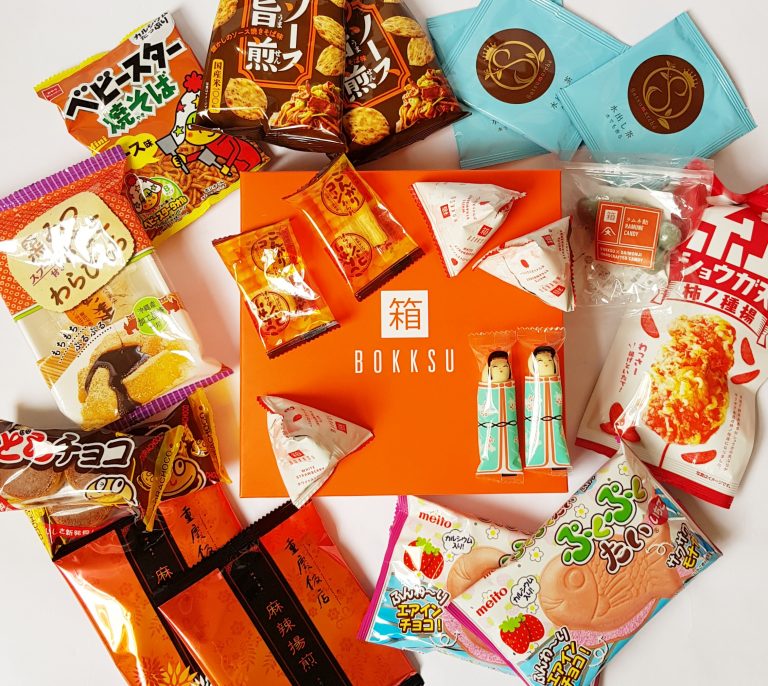 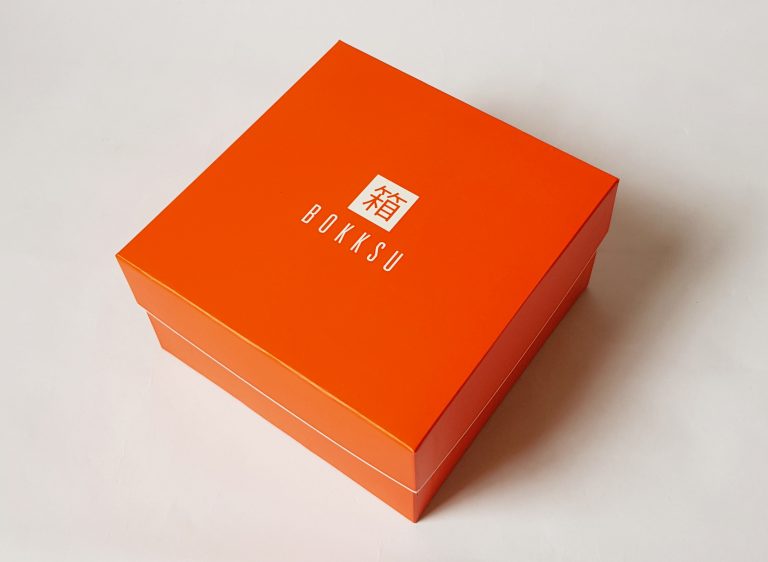 The presentation box is excellent quality, and is very useful to reuse as a gift box, or of course it is recyclable 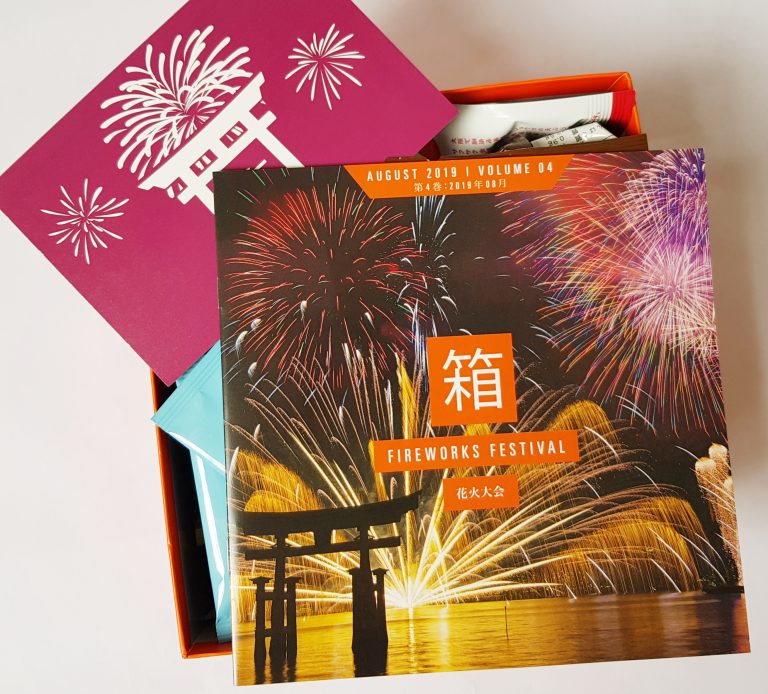 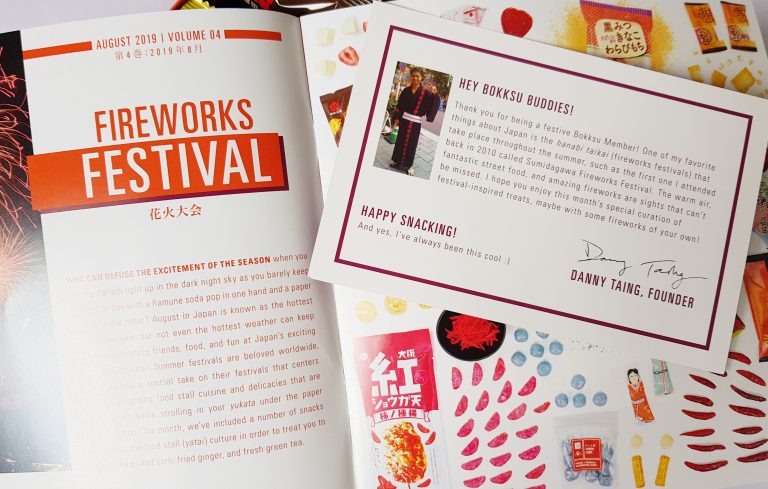 I love that these snacks will reflect some of the flavours from Japanese street food stalls. 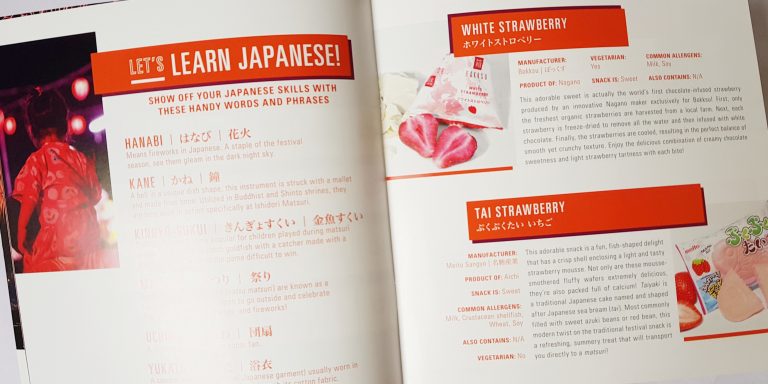 The menu booklet has lots of interesting information, including some Japanese vocabulary and a little article on one of their featured artisans. 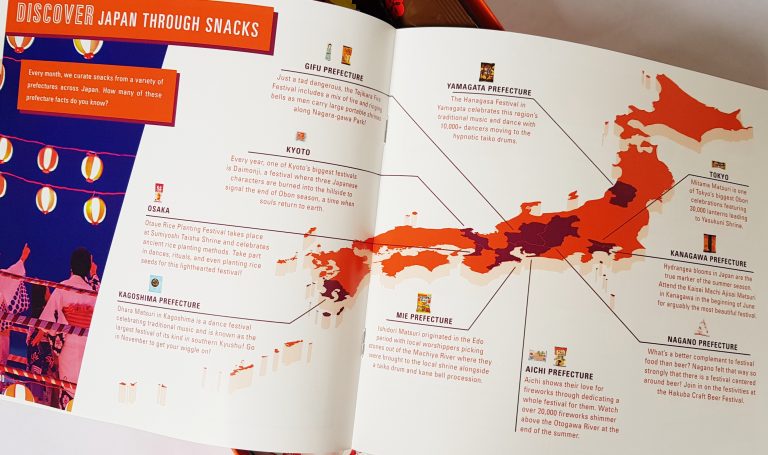 You can see where every item comes from in Japan! 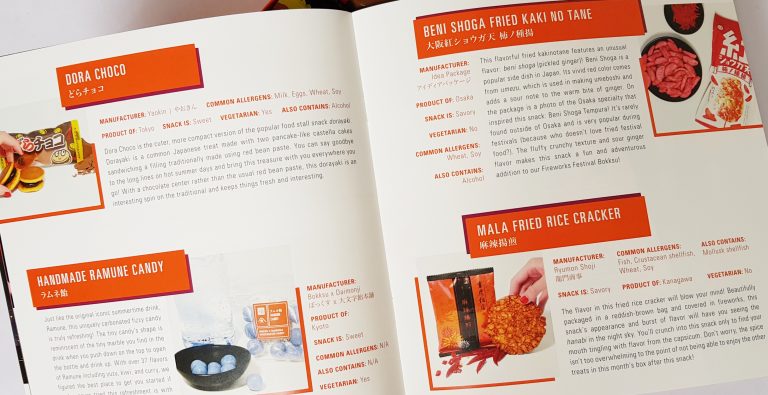 You also get a list of the items in the box. There are descriptions and also an allergy guide, which is really useful.

White Strawberry pops up fairly frequently in Bokksu, and I’m really glad to see them again! These delicious things are a freeze-dried strawberry which is then soaked in white chocolate so it’s both slightly crispy and meltingly smooth. Incredibly indulgent and yummy, and a great treat for summer too. 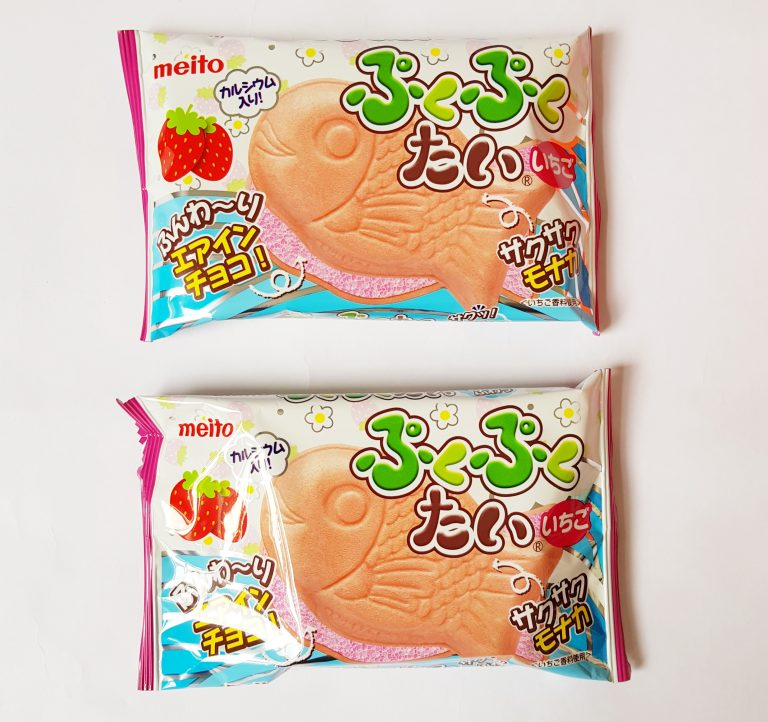 Tai Strawberry is another familiar candy. It’s based on a traditional Japanese cake that is shaped like a fish and filled with red bean paste. This version has a crispy wafer shell that is filled with bubbly and crumbly strawberry chocolate, rather like the inside of an Aero bar. It’s very light but delicious! 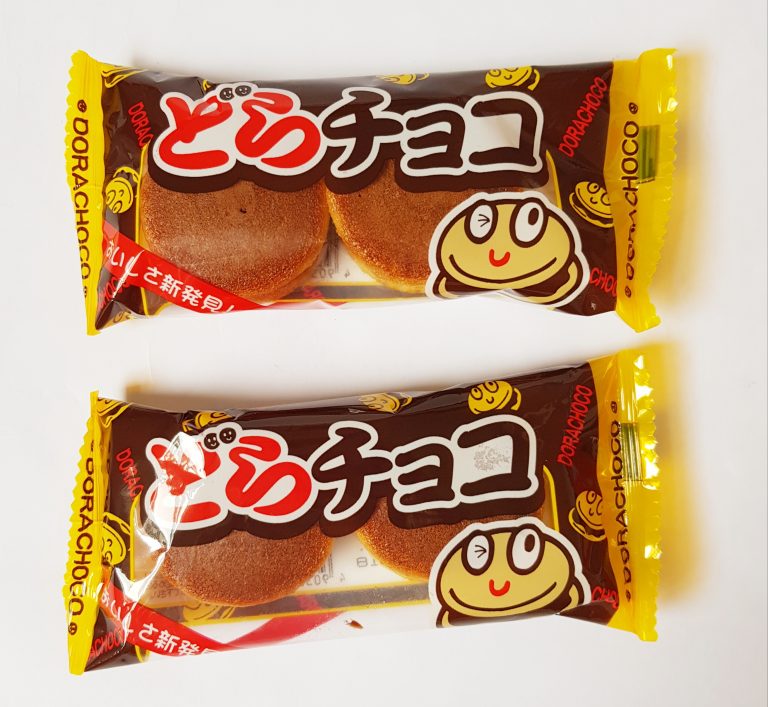 Dora Choco is another traditionally inspired sweet treat. The original dorayaki is a sandwich made from two sponge cake-like pancakes with a red bean filling. This mini version has a chocolate cream centre and is the perfect bite-sized treat! 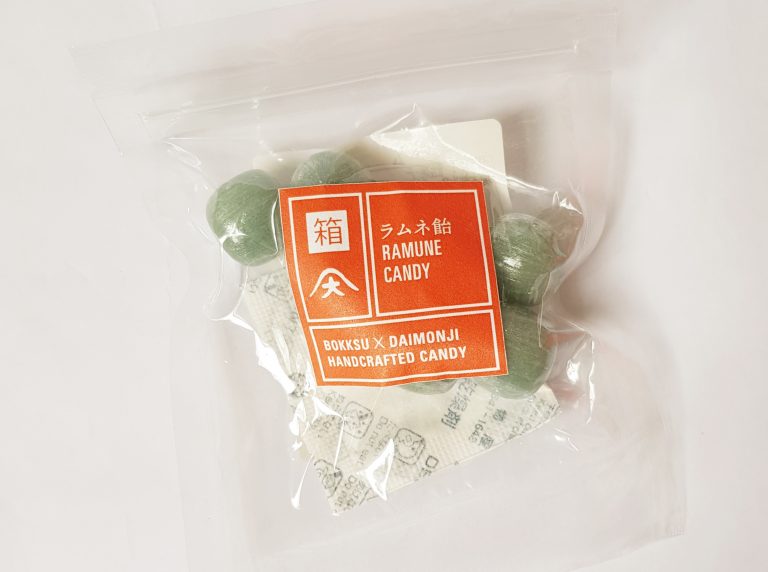 Bokksu produces its own exclusive line of hard candies in all kinds of wonderful flavours, and this month’s version is Ramune Candy. Ramune is Japanese soda pop, and it’s a common candy flavour. However while ramune candy is usually a slightly powdery and fizzy, this version gives you the original ramune flavour in a lovely boiled sweet! The round shape is also similar to the marble stopper in traditional ramune bottles. 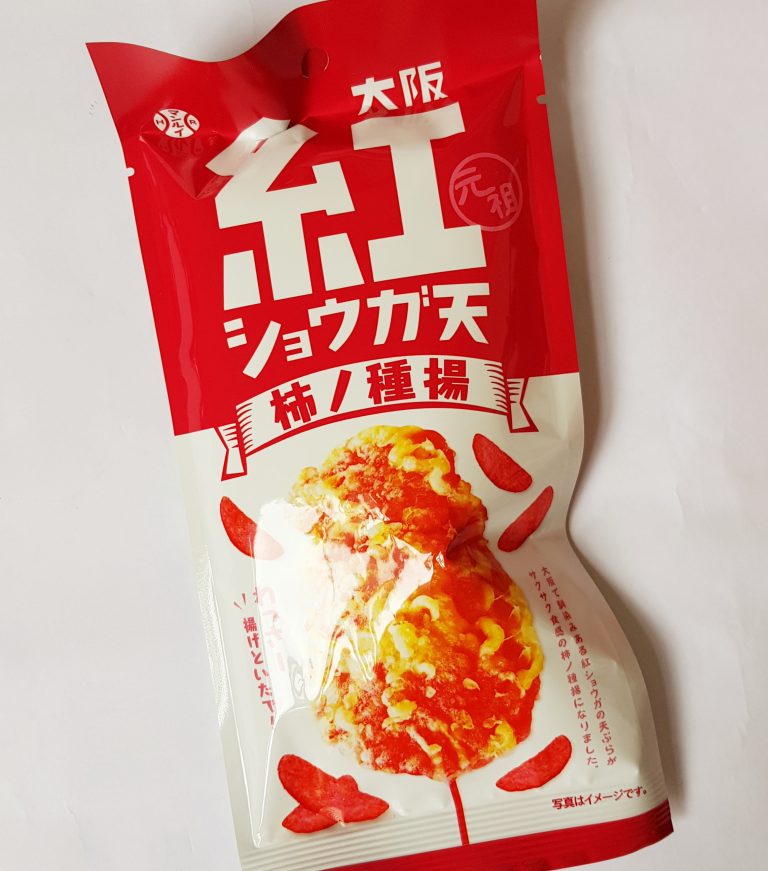 Beni Shoga Fried Kaki No Tane showcases pickled ginger, one of the most distinctive Japanese flavours. These crispy rice crackers are a distinctive crescent shape, have sharp sour flavour. They particularly reference a favourite street food in Osaka, which is Beni Shoga (pickled ginger) Tempura. These go very well with a cold beer on a hot evening! 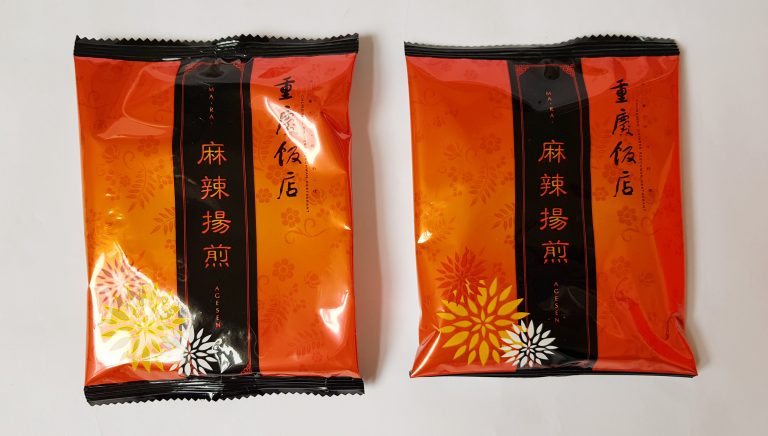 Another savory item, these are Mala Rice Cracker. Mala is a spicy sauce made from chili, sichuan pepper, and other hot spices, and this large senbei contains all these wonderful flavours! I haven’t tried this because it contains shellfish, but I suspect this has been included because apparently it feels like there are fireworks in your mouth after eating! 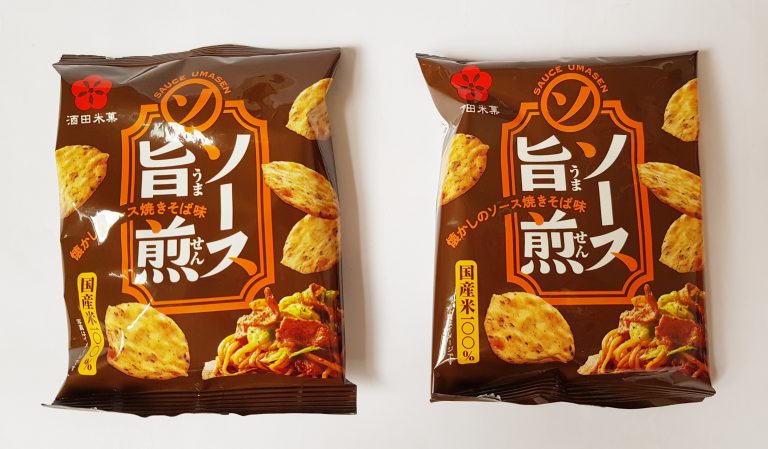 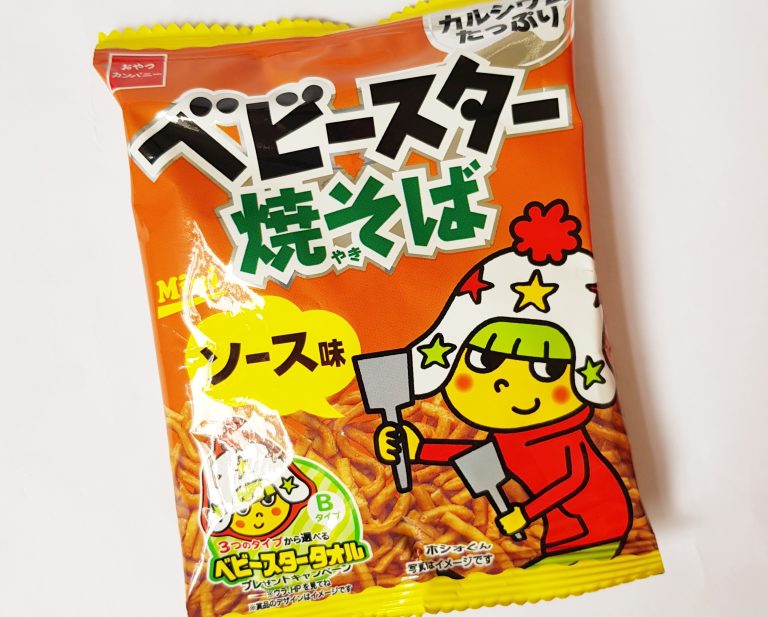 This is another street food-based snack, Baby Star Yakisoba. Yakisoba is a popular noodle dish that is flavoured with a type of oyster sauce. This version is crunchy dried noodles with all the yakisoba flavouring. It might sound odd to eat dried noodles, but again they are an excellent beer snack! 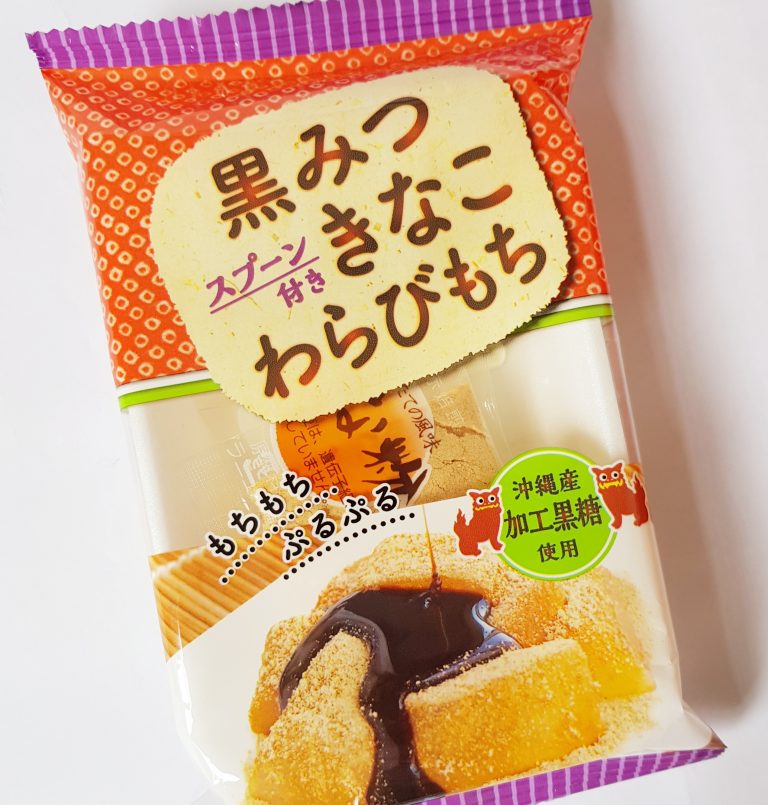 Black Syrup Kinako Warabi Mochi are a little bit of a do it yourself snack! It consists of warabimochi which are made from tapioca starch, plus black syrup, which is a little like molasses, and kinako (roast soybean) powder. 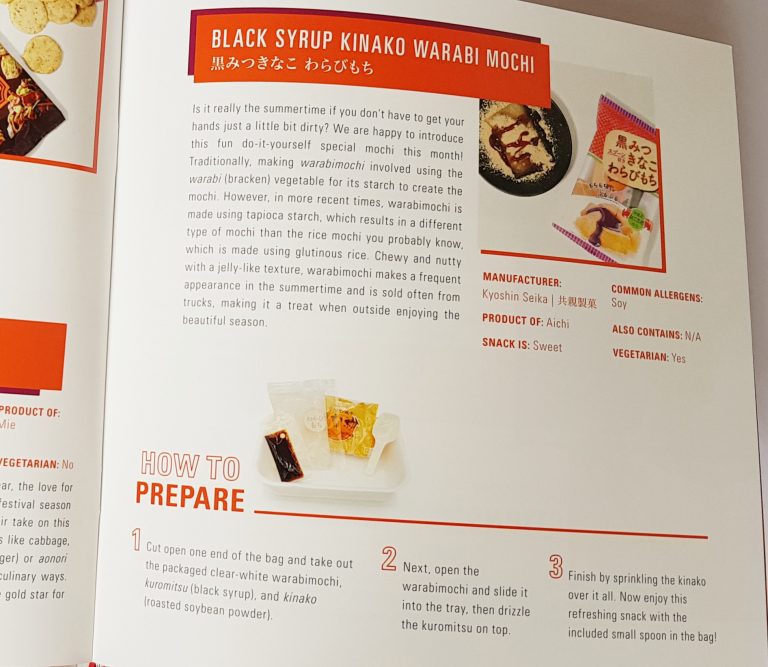 There are instructions in the menu booklet. I’m very glad to have this because kinako is one of my favourite flavours!

This month’s tea choice is perfect for hot summer weather. Satsumatche Mizudashicha Tea is a blend of sencha matcha green teas, and is recommended to be drunk as a cold brew. 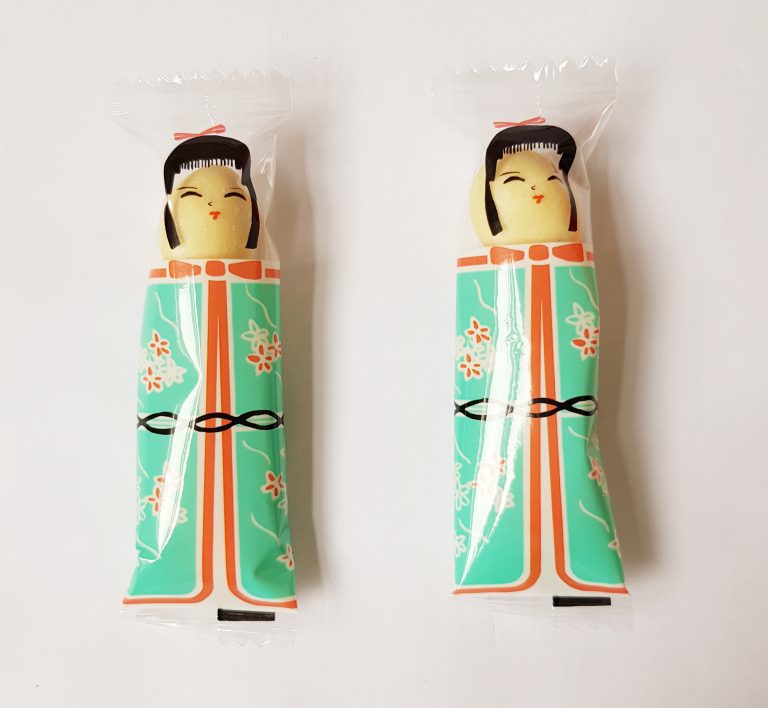 Hana Kokeshi  is almost too pretty to eat! Kokeshi are traditional simple wooden dolls from northern Japan. The packaging of this little snack reflects this design, and inside is a peanut for the head and a soy rice cracker for the body. 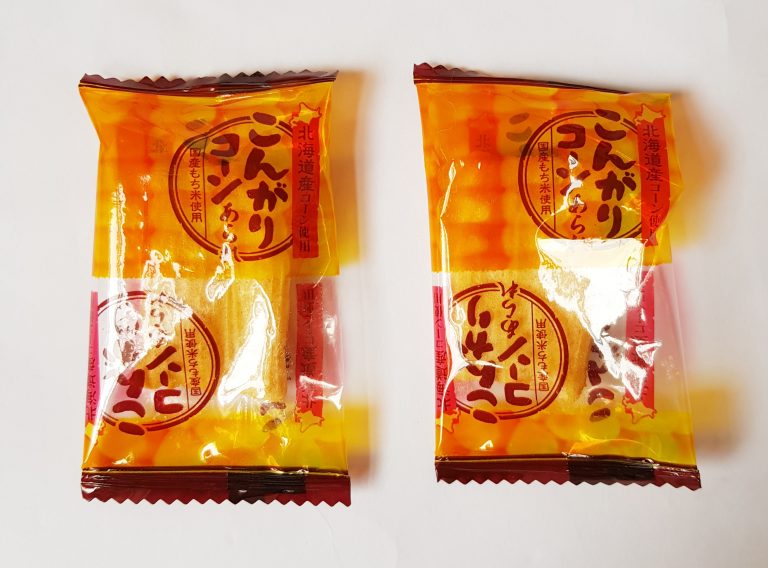 Finally, Kongari Corn Rice Cracker. Grilled sweetcorn is a common sight at Japanese festivals, and this rice cracker contains the lovely sweet and smoky flavour of the corn!

The flavour varieties this month are excellent, and I love the street food inspiration. There is a great mix of sweet and savory, and while I'm always a little sad to have to avoid the shellfish-based snacks, I know they go to good homes! All the Bokksu items are really rather specialized, and certainly aren't flavours that you would otherwise taste. The experience is also enhanced by the informative menu booklet, it's really interesting seeing where all the different foods come from. If you can't yet get to Japan to sample their street food, this is a great way to get a taste for it first!