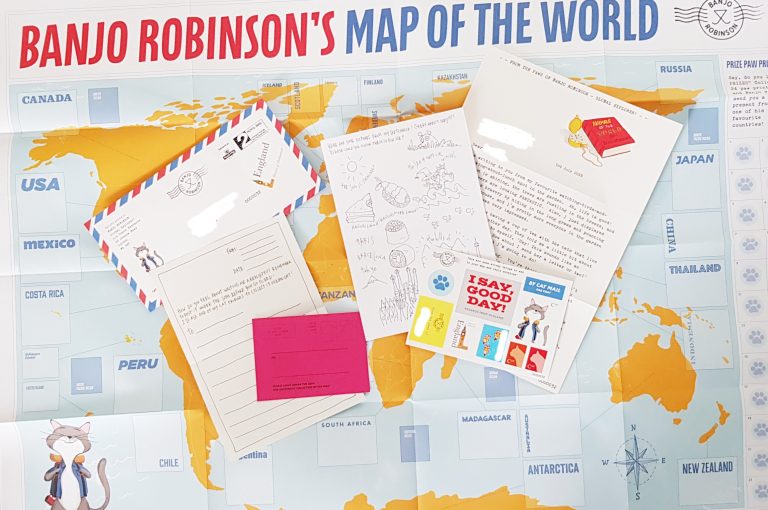 Banjo Robinson is a travelling cat.

Every two weeks he will sends your child a personalized letter from around the word, which includes stickers, stamps, colouring, and occasional extra surprises!

The idea is that your child will be encouraged to write back, and a letter template is included for that purpose.

In case you’re wondering how the letter gets back to Banjo, it is mailed under the sofa for one of Banjo’s cat pals to collect. Children also have the option to give the letter to a parent to ‘post’. What this means is that parents can remove and then keep their child’s letters, which will make a lovely keepsake for them!

Pricing is from £5.15 per month (two letters a month) for the full 12 month subscription, with slightly higher prices for shorter options.

The first pack includes a letter and also a wall poster, showing where Banjo will be travelling. 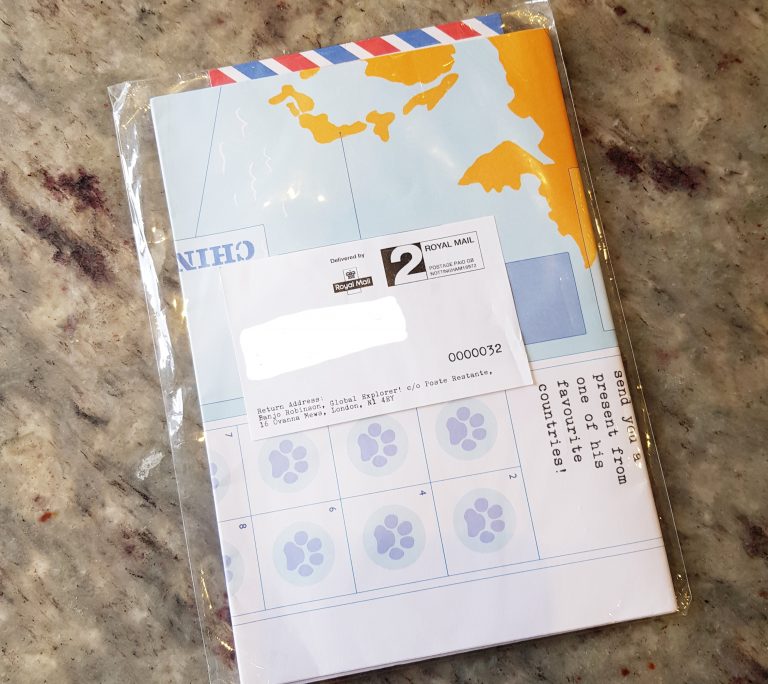 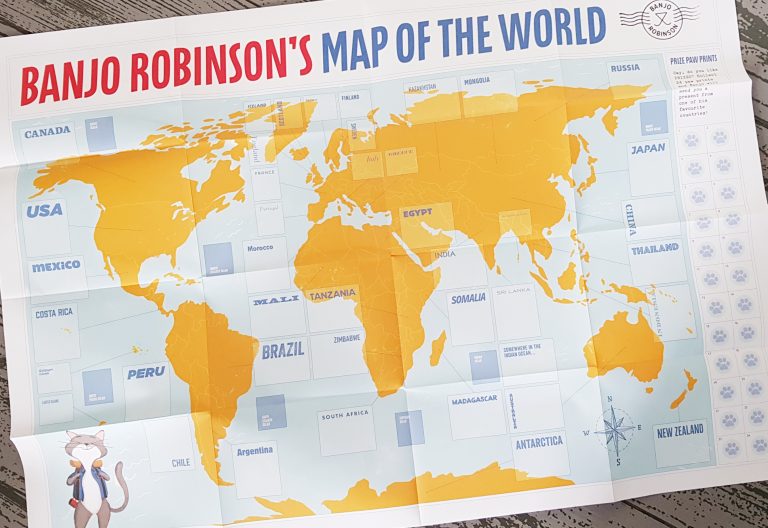 Here is the poster. It’s quite large so you need a decent amount of wall space. It’s also rather good quality, with nice thick paper.

There are spaces for a country sticker for every place Banjo visits, plus paw print stickers to collect for a prize!

And there’s the letter! Even though the two are together in one package addressed to your child, you can always remove the letter, which is also properly addressed, and then produce the wall poster at an appropriate moment. 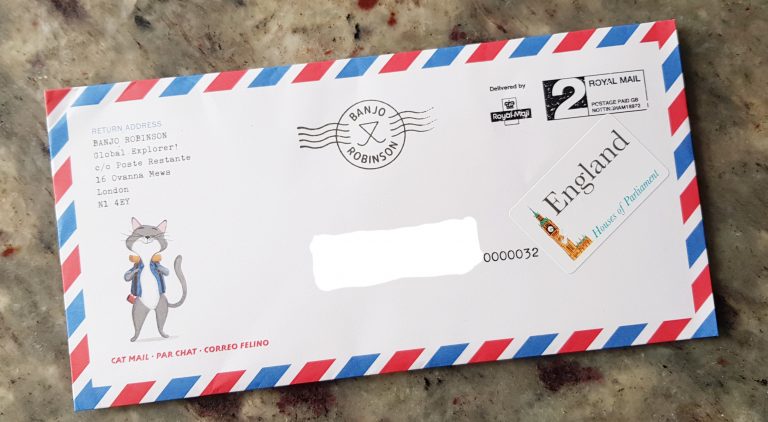 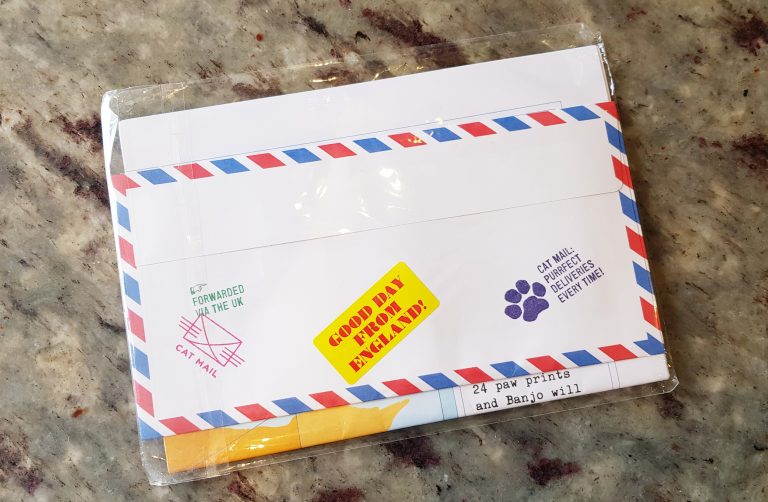 Even just the envelope looks wonderful! It’s airmail style, which is great because future letters will be coming from ‘abroad’. There’s also a picture of Banjo himself, plus decorative stickers. 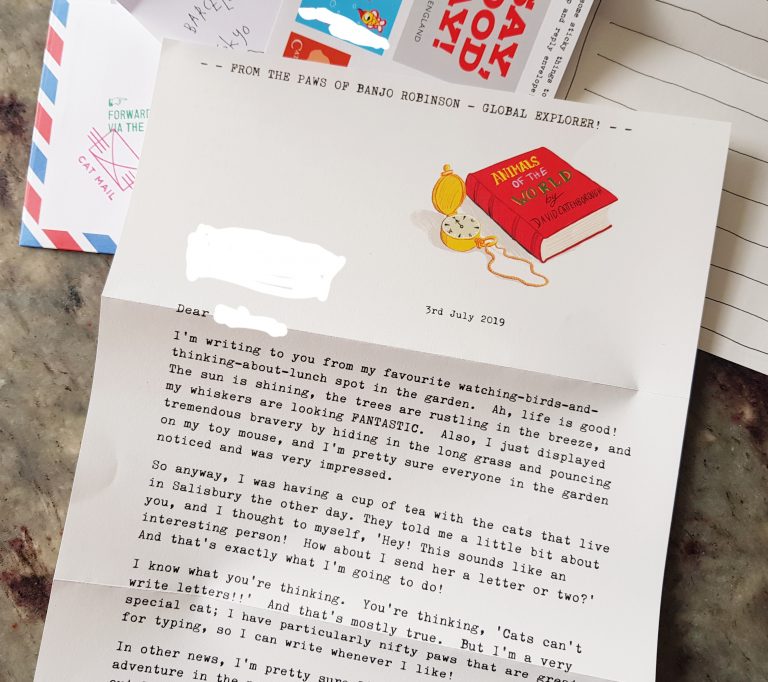 Here is the letter. The paper is beautifully designed, and the illustration prompted a lot of laughter!

It has some lovely personalised details, as well as obvious things like the child’s name and address.

When you sign up, you are asked for a few details. As well as the address, you can say if you have any pets, favorite foods, and activities. You’re also asked the colour of your sofa! These details are incorporated into the letters, which make it very convincing for children!

You can also add a PS as an extra personal touch. In fact you are prompted by email to do this every couple of weeks, so if there’s something in particular you want to congratulate your child for , or remind them of, this is a great opportunity. 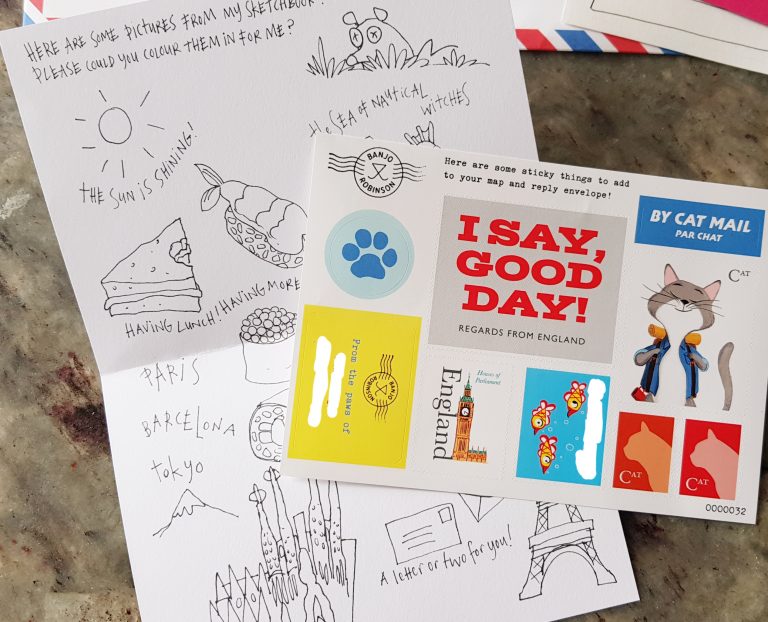 As well as the letter, there are some extras.

There’s a sheet from Banjo’s sketchbook for colouring. The illustrations are marvellous!

There is also a sticker sheet, with stamps for your reply, paw and country stickers for your wallchart, and some extra personalized stickers. The ‘From the paws of’ sticker is particularly fun.

As well as the fun of receiving a letter, writing back is definitely encouraged. Here is the letter template and special envelope. 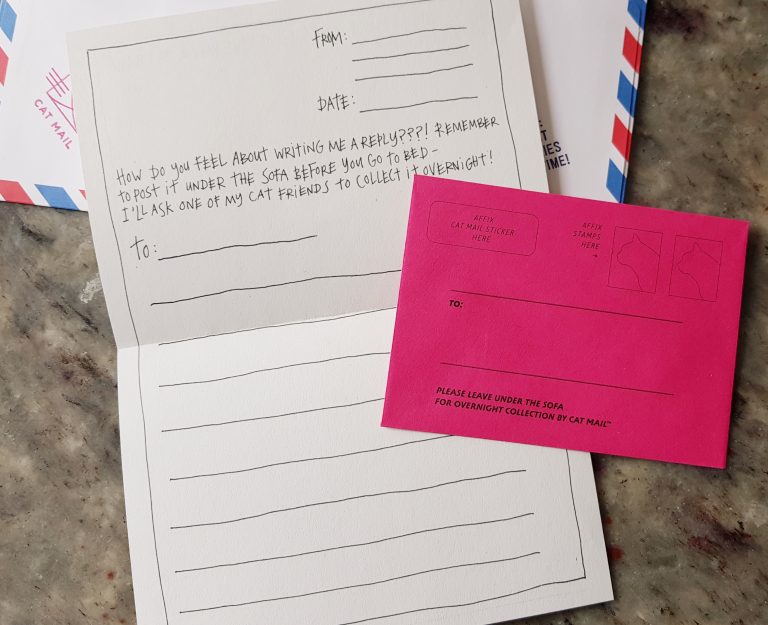 The template is well designed, with a reminder of how to post it, and just enough lines for a child to write something good without getting bored!

On the reverse is a space for the child to draw a picture. 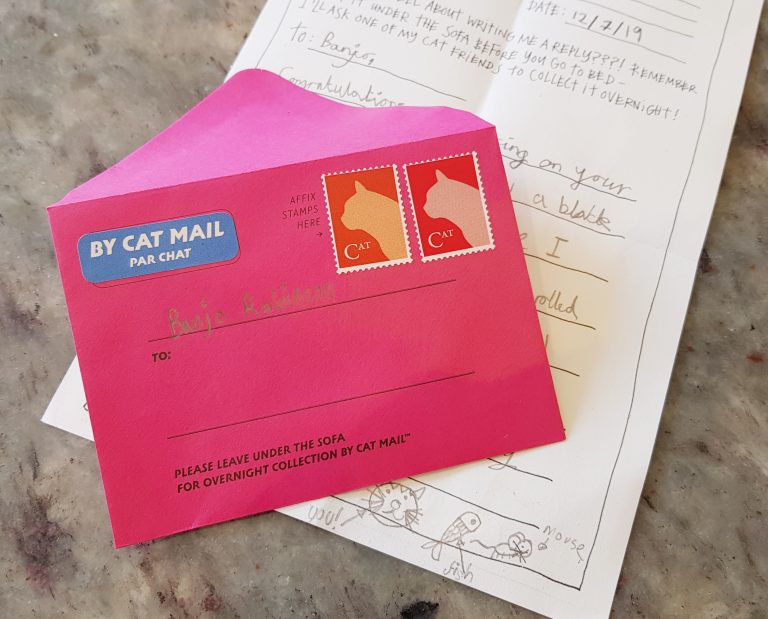 And here is the letter, stamped and ready to be put under the sofa!

This is one of the most charming and creative things for children I’ve seen in a long time.

She doesn’t need much encouragement to write or draw, but the moment she finished the letter, and checked out the stickers, she immediately sat down to write her reply.

The colouring was also enjoyed very much, which was great as usually she is not a fan of colouring. But we both liked having a group of smaller pictures rather than just one large one, and we had fun choosing crazy colours!

The letter and the idea of having a cat penpal caught her imagination immediately, and she started figuring out how exactly a cat would get into our house to collect the letter. She also was very thoughtful in her reply, and made a real effort with her handwriting.

I’m not great at judging the reading level, as my daughter is an excellent reader and can whizz though almost anything, but there’s no reason why the it couldn’t be read together with a parent as well. Both younger and older children will get a great deal out of it.

The typewriter font and illustrated paper adds even more interest, so the visual presentation is very impressive.

A travelling cat penpal is so exciting and funny, even reluctant readers and writers should get a big kick out of this, and be encouraged to write back!

I should also say that I think the price is an absolute bargain. Each letter is less than the price of a cup of coffee, and for both entertainment and education it is a wonderful gift for any child!

This the introduction, and an excellent start, and we're so excited to read all about Banjo's travels!

How would you rate Banjo Robinson ?