Drinkable skincare for women AND men. Absolute Collagen is a powerful anti-ageing liquid collagen supplement that fights against the visible signs of ageing. In the arena of ingestible beauty products, collagen has long been recognised as the star player.

Collagen is found in skin, bones, and connective tissue, and supplementation is supposed to improve the appearance and quality of the skin, hair, and nails.

Absolute Collagen provides single-serve daily sachets of liquid collagen, which are portable and easy to drink.

The collagen itself is marine sourced, which apparently has higher bioavailability than the usual bovine or porcine collegen. It’s also made in the UK, which is reassuring! 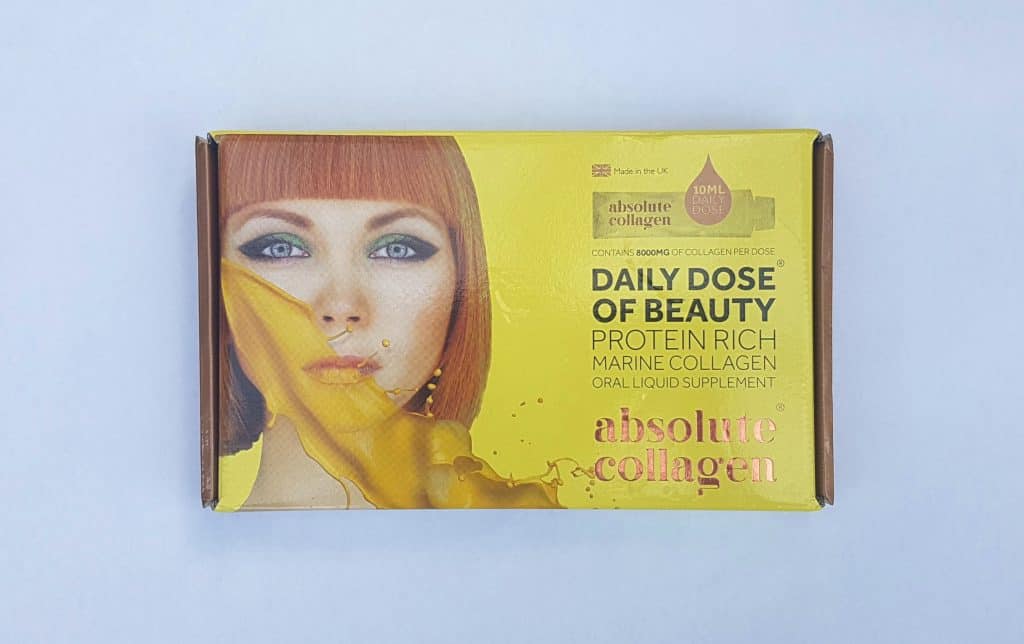 They have male and female packaging versions, though the content is identical for both. 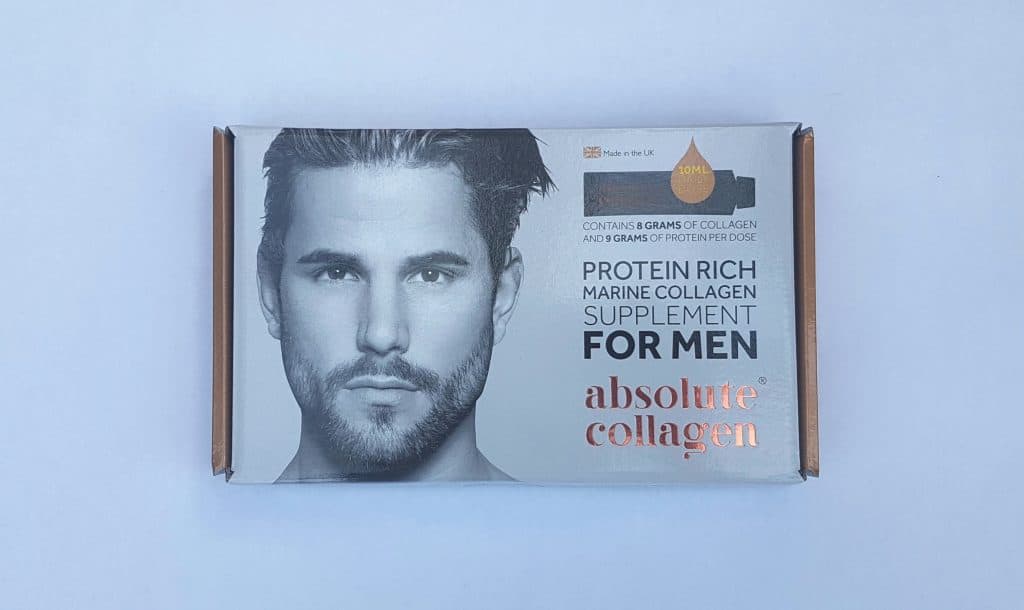 The men’s version is called, rather splendidly, the ‘Stud Pack‘! 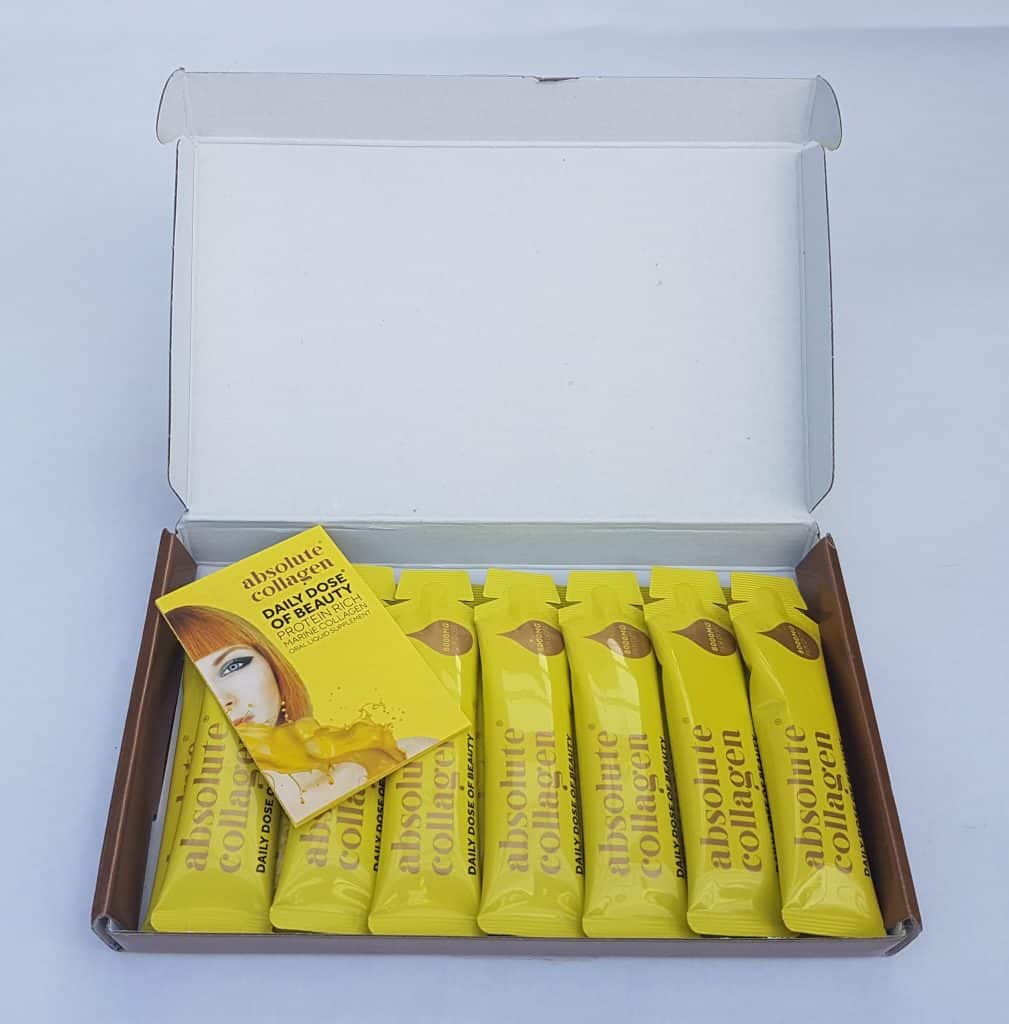 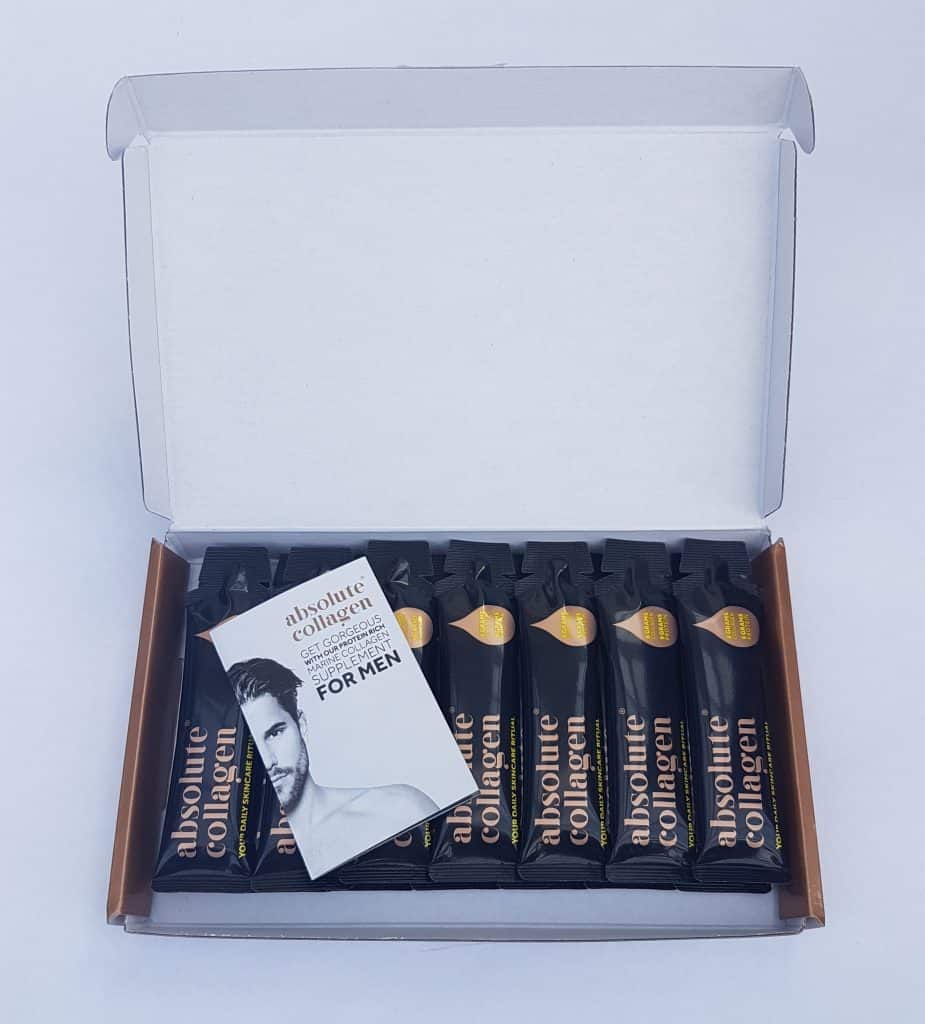 They come in packs of fourteen sachets, two weeks’ supply, and costs £29.99 per box.

The boxes contain a leaflet which outlines how it works. 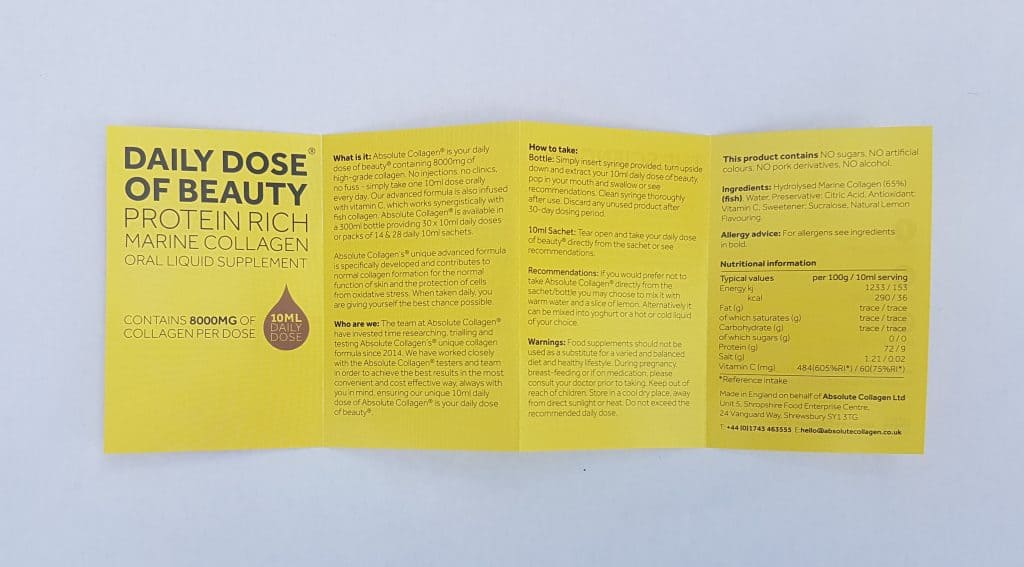 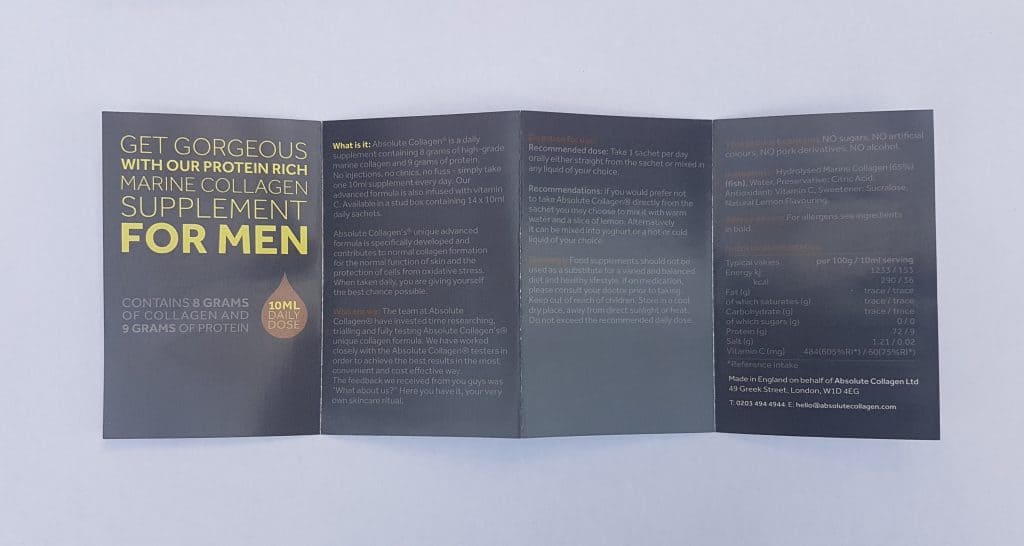 You can find out more about their product in their FAQ page. The science-y stuff is here.

Anyway, I was sent two packs, one each for me and my husband to try.

The box is thin enough to fit through the mailbox, so no sorting office trips.

The supplement is, as I said, in liquid form, and is flavoured with lemon. The sachets are very easy to use: just cut or tear off the tab at the top, and drink. They are also pretty sturdy, so you can throw them in your bag or pocket if you’re taking them whilst out and about.

The liquid itself is the consistency of cough syrup. The lemon flavour is strong (no doubt to mask the actual flavour).

My first impression of the flavour was that it was distinctly lemony with a bitter undertaste. It wasn’t unpleasant, but I didn’t love it. The second try I didn’t like at all. Then the third day it tasted absolutely fine. Also the ‘dose’ isn’t very large, it’s about a mouthful, so you don’t have to drink loads of it. They suggest you can mix it with a hot drink or yoghurt, but I didn’t bother, it was easier and quicker to just gulp it down.

My husband didn’t like the flavour at all, but he put up with it; he just made sure he had a slurp of coffee afterwards!

As we just had the two weeks’ supply, we weren’t expecting any huge difference

Because we were slightly forgetful, we missed a couple of days, so it took around seventeen days to finish the packs. However I don’t think it was a problem.

I take reasonable care of my skin, but I’m not precious about it, and I don’t wear tons of makeup, so I’m quite used to seeing my skin as it really is, rather than under a layer of foundation. I’m also extremely fortunate that I have inherited great genes when it comes to aging, so I don’t have lots of fine lines. I do use body lotion, especially in winter, because my skin does not like the cold weather.

My husband is good about moisturizing, and he also has a magnificent beard, which covers a fair bit of his face! Frankly, he looks the same to me (except with a beard) as he did when we met over eight years ago, so I had to rely on his own perception of his appearance!

My skin, which has a tendency to dryness, especially in the winter, was definitely much less dry than usual for this time of year. My husband didn’t notice any difference in his skin, but he doesn’t have dry skin anyway.

But there was a huge difference we both noticed within a week, and that was our hair.

My husband wandered out of the bathroom a few days after we had begun taking the collagen and said that his beard had gone crazy! Not only was it growing faster than before (and he does have a fantastic beard) but it was noticeably thicker and felt much softer. His hair, which is considerably shorter than his beard, was also growing faster and felt similarly softer.

That made me remember that two friends had just complimented me on how good my hair was looking. It had surprised me at the time, because that was a day when I didn’t wash my hair (I tend to wash it every other day because I’m lazy) and usually on those days it looks a bit dull. Then I looked properly, and noticed that it did indeed look rather nicer than usual. My hair is very fine, and when it’s clean it looks lovely and shiny (though annoyingly straight) but when I haven’t washed it it’s really not at its best. But yes, even on the second day my hair looked much better.

At the end of the two weeks my hair was much improved even when unwashed, even a little fuller, and it had certainly had a little jump in growth. I’m also due a haircut, and yet the ends are looking much less ratty than they usually are when I’ve avoided the hairdresser for three months.

I have to say that we were both surprised to notice a difference in such a relatively short amount of time. This is a supplement that can (and probably should) be take long-term to notice major differences, but we were both tremendously impressed with the effect after just two weeks.

The price works out at about £2.15 per day, which is less than a coffee. It’s not cheap, but it every appearance of being a very effective supplement.

How would you rate Absolute collagen ?