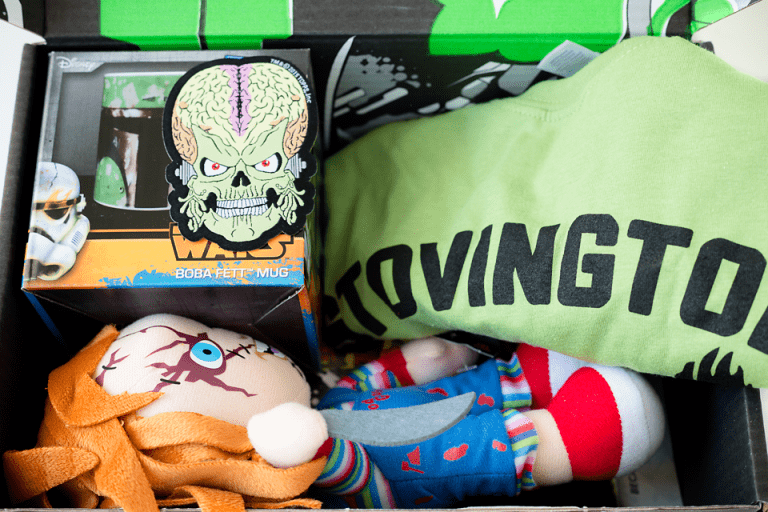 After the amazing ZBOX delivery last month I was keen to see if February’s box would be as good, I knew the theme would be’ Killer’ as last month’s box gave a hint in the magazine,  so I had an inkling it would be an intriguing box and one that I would want to keep. First out of the box was the bright and colourful Mars Attacks Patch to add to your bag or jacket (or anywhere you like) – from Planet Replicas, a hub of iconic replica products to collect and treasure. As a huge Tim Burton fan the box is worth it just for this item alone! An exclusive and very collectable gem from the Mars Attacks movie that I still haven’t decided where to sew it onto.

Deadpool was released this month and in homage to the release from Marvel Comics the comic – Deadpool Kills The Marvel Universe – Graphic Novel was added to the ZBOX. Written by Cullen Bunn and illustrated by Dalibor Talajic this is an X-Men/ Deadpool comic book to whet your appetite for more of the Deadpool classics and if this is your first then what a great way to start your collection.

If that wasn’t enough of a Deadpool installment, ZBOX also included the #1 Deadpool Marvel True Believers comic, the writing and the illustrations are so captivating and this is a true collectable series that will have a place on my shelves. The only flaw in this Marvel comic is the ‘to be continued…’ at the end as I just want to read on! Not a flaw but a clever marketing tool as of course you want to read on as it’s a brilliant story – loved it!

Next out was the homicidal doll from the classic Chucky films, a soft plush design from Mezco and definitely not cuddly! This Chucky plush figure has the menacing look that we all recognise from the movies, he even comes with a knife ready for trouble and certainly not for child’s play, a must to be put on a collector’s shelf.

Celebrating the iconic horror films ZBOX chose a real all time classic – The Shining, a film by Stanley Kubrick that was a huge success following the amazing 1977 novel by Stephen king. A tribute to Jack Nicholson’s character Johnny ‘The’ t-shirt he wore with ‘Stovington Eagles’ on the front, it was great to receive something I could wear (and will wear and wear again!) in the box, very comfy and this 100% cotton t-shirt is a real gem in this month’s box – love it!

Fans of Star Wars will love this addition as it’s the Star Wars Boba Fett Mug from Paladone, the perfect mug to take five and have a cup of tea or coffee and it is as you would expect a well made, sturdy mug with fantastic graphics. If you watched the gruesome and brilliant 2000 film American Psycho, you will remember that Patrick Bateman played by Christian Bale the inscrutable investment banker with the ‘Pierce & Pierce’ business card he loved to flaunt to show his advancement and vanity. When I saw the addition of the American Psycho business card it took me back to the first time I watched the gory horror movie, and it’s a really interesting and for me, a collectable treasure from this month’s ZBOX.

A really great box this month and as a little teaser for next month’s ZBOX all we have to go on it ‘Guardians’ which was on the reverse of the ZBOX magazine, I can’t wait as I think this month topped the January box – I will wait and see.

Hi I'm Caroline,I'm a UK Blogger and subscription box fanatic! As well as having the pleasure of guest writing for All Subscription Boxes I also have my own blog My Family Ties where I share all my life, loves and all family goings on.My blog can be found at the address below: http://www.my-family-ties.com/Twitter @MyFamilyTies1