A new wine every month, paired with hard to find delicatessen, artisan and organic foods.

Discover the authentic gastonomy and cultural heritage of Spain through its foods and wines, The Flavour Club will be your passport to flavour bringing you not only new wines and foods but also the stories behind each supplier and the area and origin of products.

Our monthly box also allows you to try a wine before committing to a full case, and if you like a wine you have tried it can then be purchased by the case through our site.

The box comes with a mini ‘passport’ for you to track the regions of Spain whose cuisine you’ve sampled and to add ‘stamps’ which allow you to gain access to Flavour Club member discounts. 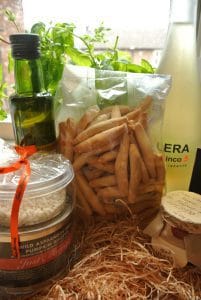 Our box contained 5 items, however it’s a bit different from the average food subscription box as it comes with a bottle of wine to accompany the food selections. It’s also significantly more expensive than many of the monthly food subcription boxes, the addition of wine clearly adds to the cost and perhaps the quality of the ingredient?? We really enjoyed 4 of the 5 items in our particular box and the last item was ‘Just OK’.

Pumpkin and Asparagus Risotto from Just Married was the ‘Just OK’ item.  It wasn’t bad, but it wasn’t’ great.  On the up side, it was quick and easy to prepare and if I was tired and too lazy to cook anything else I’d be glad to have it in the cupboard.

Yllera Verdejo from Winery Grupo Yllera more closely resembled a cider than a wine in flavour, it was a nice chilled beverage which was fruity and refreshing.  We could have easily finished another one or two bottles.   More please!

Organic Extra Virgin Olive Oil from Almazara del Ebro.  This olive oil was absolutely fantastic, good enough to drink.  The only think you could do to hurt this olive oil is cook with it, it deserves to be the star of whatever dish you put it on. 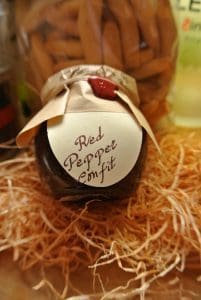 Piquillo Pepper Confit by La Cuna was a surprising little treat.  A new flavour combo for us with the savoury of roasted peppers combined with sweet.  It was great with the Picos and we think it would be great served with duck or pork.

Picos from Artesanos de la Luisiana.  Initially we were skeptical about these tiny little breadstick, but they were the perfect tool for enjoying all the fantastic notes of the olive oil and the Piquillo confit.   As a bonus, they hold up well keeping their crunch several days after being opened.  To quote the Flavour Box description ‘they go with just about anything’.

Like many people, for me Spanish cuisine usually means tapas or paella, so I was happy to expand my horizons and put another stamp in my food passport with this box.

Price begina at £48  per month, including p+p

Shipping is included via next day delivery courier (sent at the end of each month).

Use these voucher codes to get a special discount:

ZMZIZJ for 25% off on the one month plan.

MMQ5MZ for a 50% off on the first box on the monthly plans.

How would you rate The Flavour Club ?