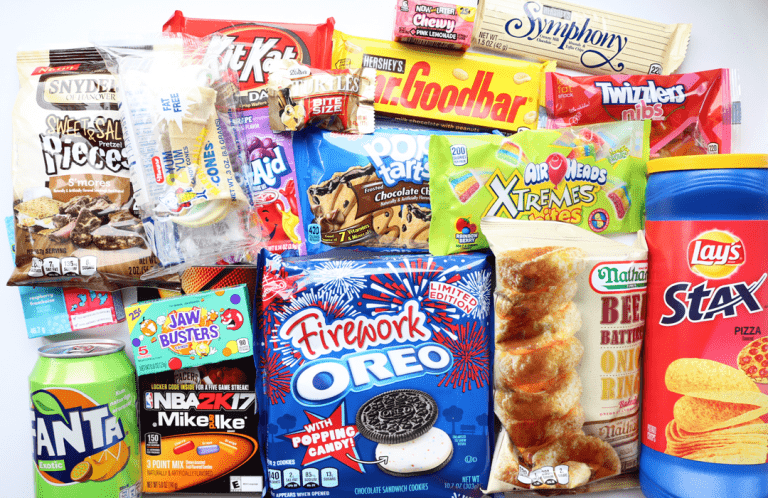 If you’re in the UK and want to get your hands on a box of American candy and snacks on a monthly basis, Taffy Mail are the people who can make your sweet tooth dreams come true. They specialise in just American candy, savoury snacks, and drinks and send a variety of these treats straight to your door – it’s like Christmas every month!

Taffy Mail offers three different sized subscription boxes (Lite, Classic and Extra) depending on your preferences and budget, and the products that you’ll receive will be a surprise selection every time, but they are guaranteed to be American products. The larger Extra box will also include bigger products like Limited Edition Oreo flavours or premium boxes of American breakfast cereal, and I personally think this is one of the best boxes to sign up to!

Here’s this month’s Extra Taffy Mail box to whet your appetite and give you an idea of what you can expect:- 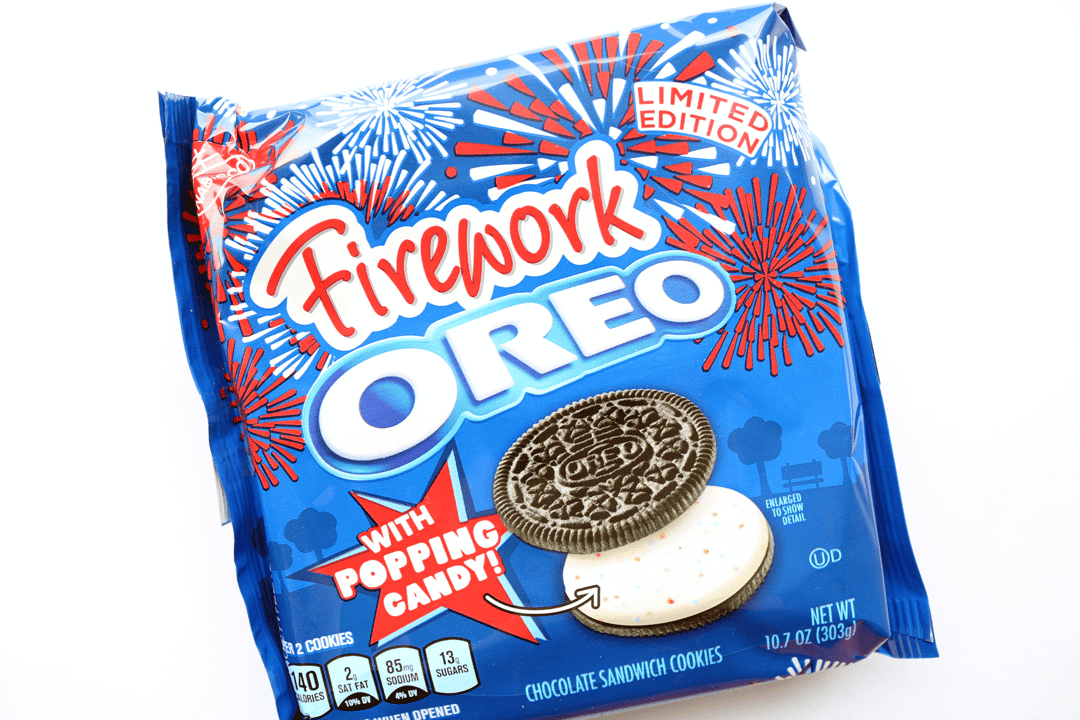 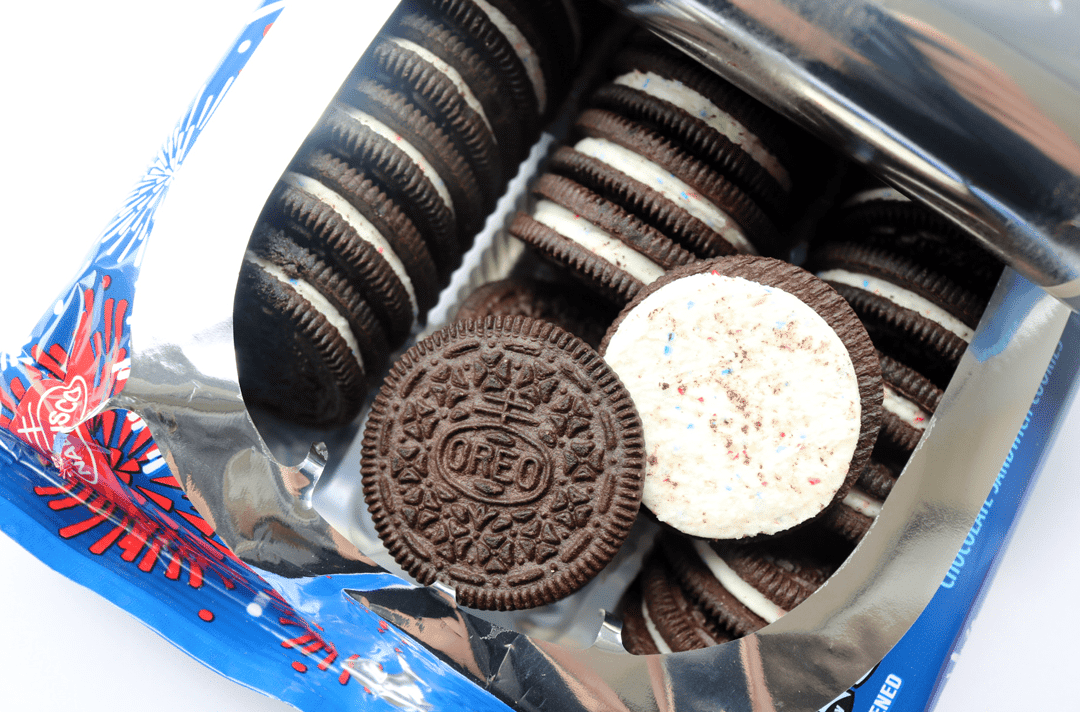 I’m a huge fan of Oreos, so naturally, the first product that I reached for out of this month’s box was the big pack of Oreos! These are the Limited Editon ‘Fireworks’ flavour which I haven’t seen in the UK. They feature the classic cream and chocolate biscuit Oreo combo but with popping candy added into the cream centre. They add an extra sweetness to the Oreos and of course, an element of fun as they lightly pop in your mouth! These were a big hit with everyone that I shared them with! 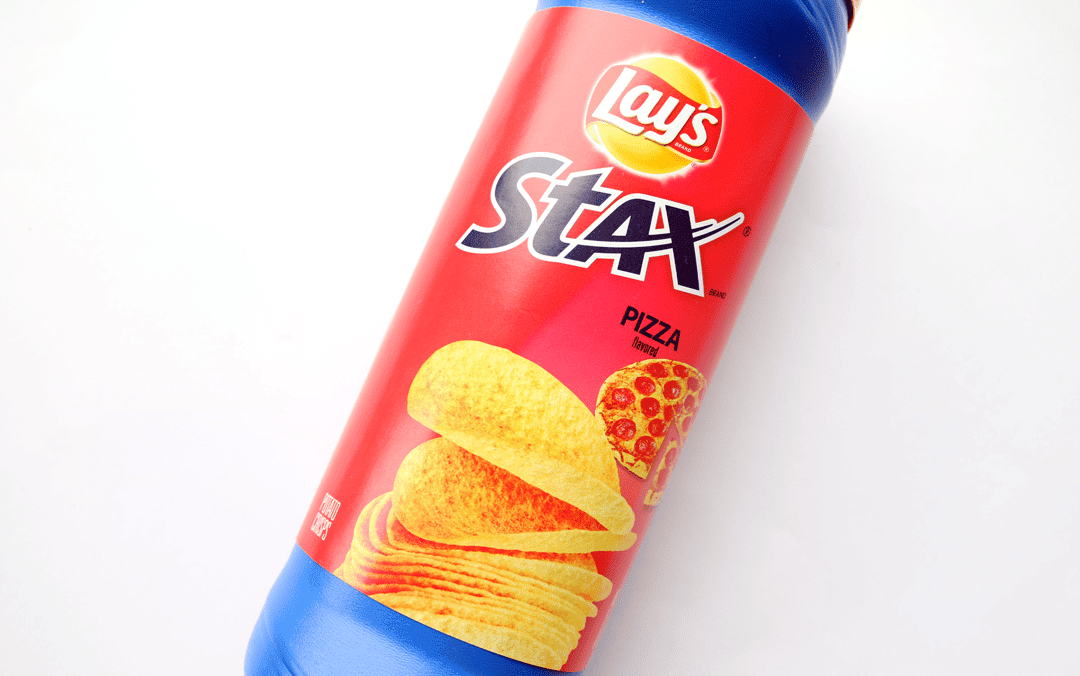 Lays are like Pringles and these ones bizarrely do taste a bit like Pizza! They’re heavily seasoned and very salty, but delicious nonetheless. A great fix for all your savoury/crisp cravings and these were another favourite amongst my housemates. 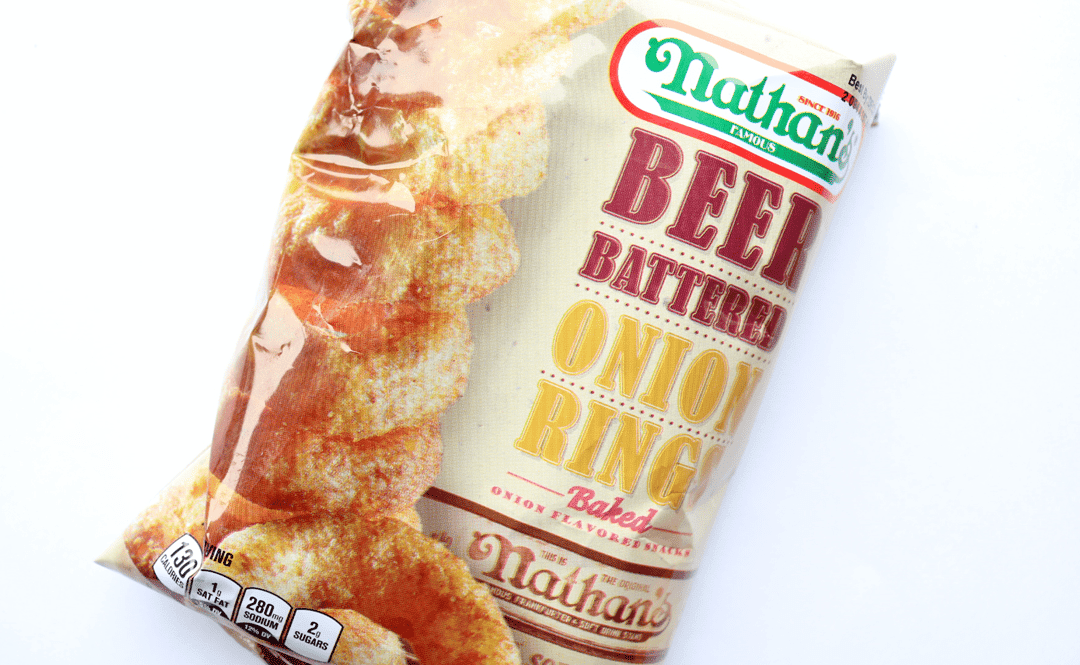 I try not to eat crisps often, but I do love tucking into a bag of onion rings every now and again. This bag from Nathan’s were amazing – crunchy, chunky, and with an awesome beer-meets-onion flavour. These didn’t last long! 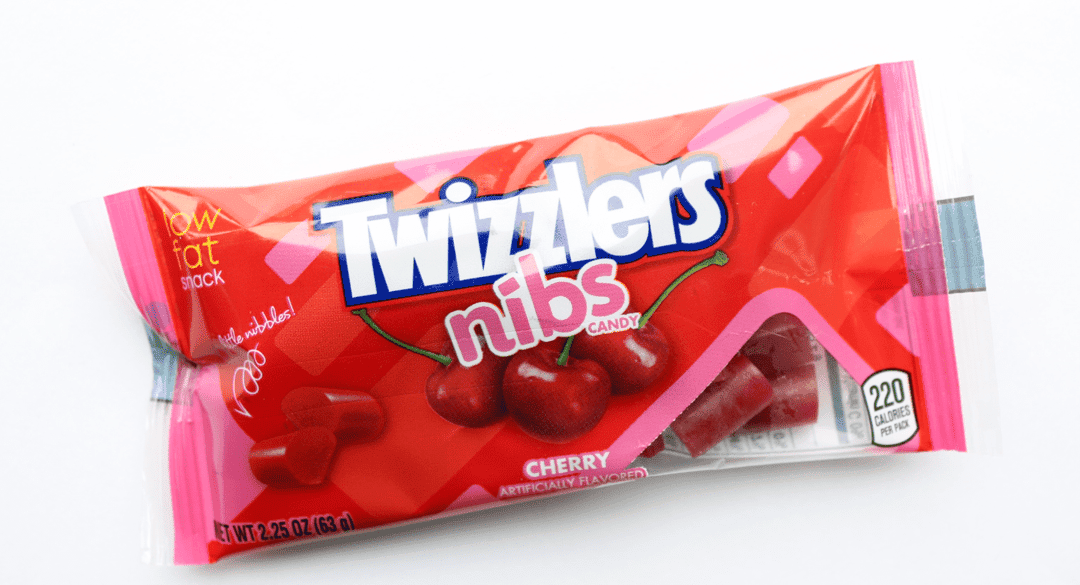 For something sweet and fruity, these little Twizzler Nibs really hit the spot with a chewy texture and a rich cherry flavour. I don’t think we have anything similar to these in the UK. 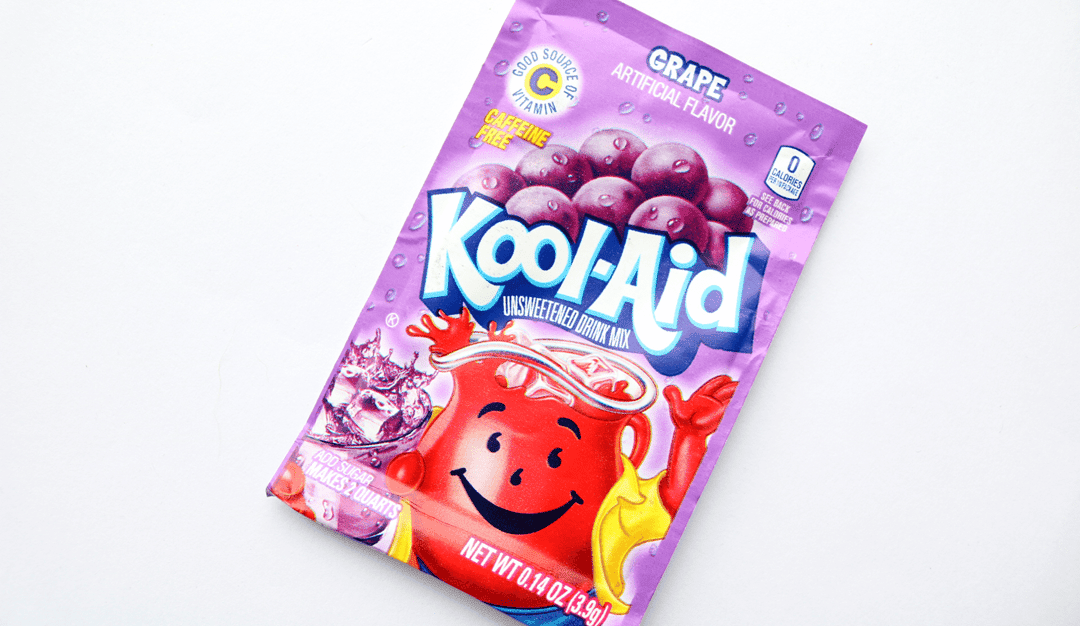 Despite its pop culture status, I’ve never tried Kool Aid before so it was interesting to finally see what all the fuss is about. This sachet contains the Kool Aid powder which you then mix with water and sugar into a fruity drink. It’s very sweet (I think I could have used much less sugar than the packet stated), but the grape flavour was great! 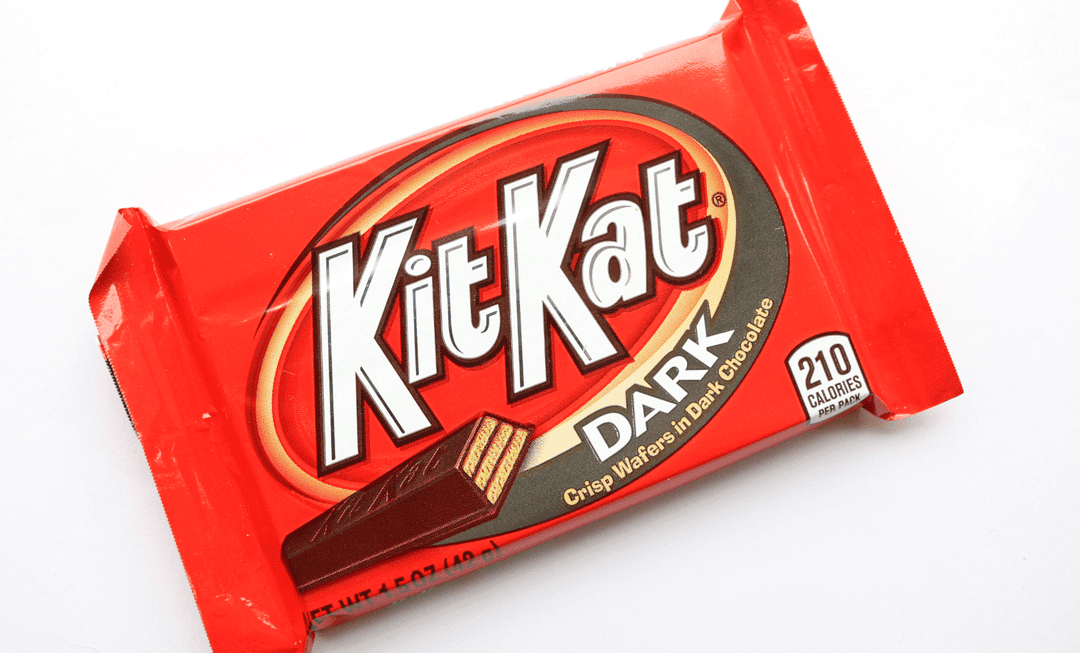 In contrast to last month’s White KitKat, this month we now have the Dark version which features the classic KitKat wafers covered in dark chocolate. It’s as you would expect it to taste like and I thought it was pretty good, though I still prefer the original milk chocolate KitKats. 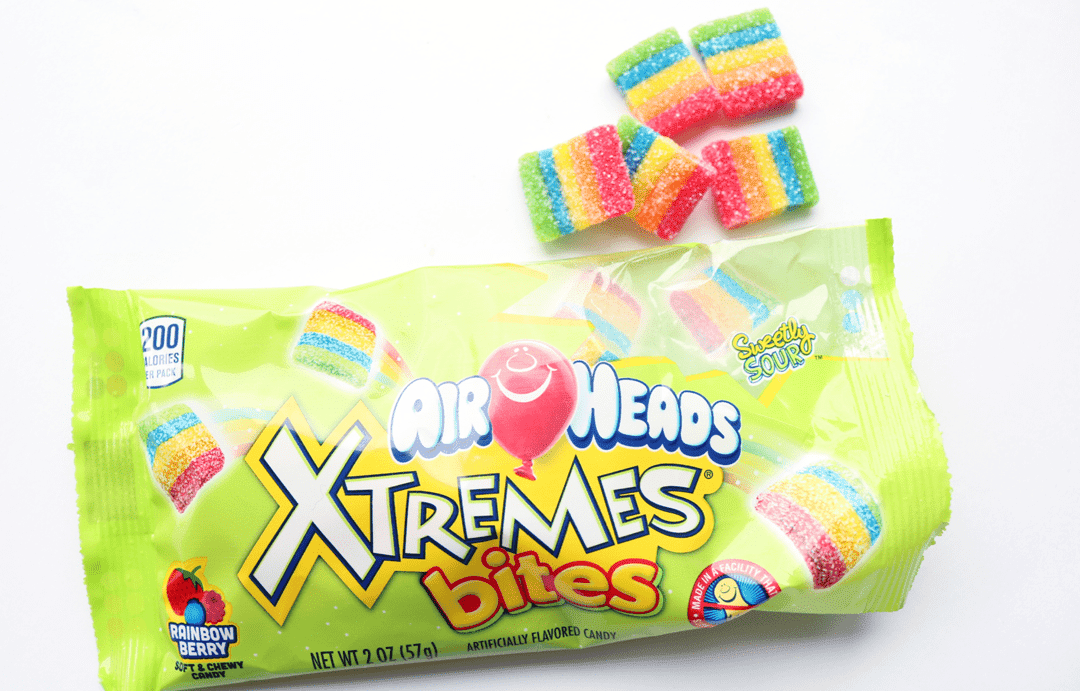 I love sour sweets – the sourer the better and these Airheads Extremes Bites were sweetly sour with a fruity Rainbow Cherry flavour. The sweets look like mini rainbows which was fun to see and I really enjoyed these! 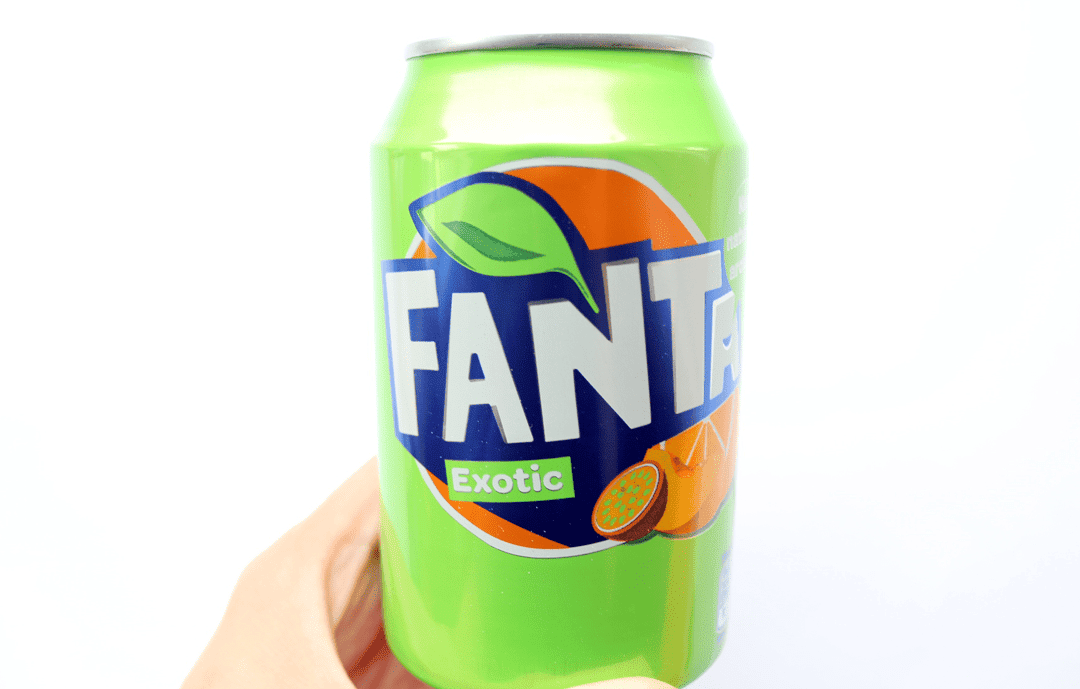 I haven’t drunk Fanta in years and I’ve never seen this Exotic flavour here in the UK. This tasted like a Rio to me – very, very, very sweet and very fruity at the same time. It’s not something that I’d want to drink often though because it is so sugary, but it’s good as an occasional fizzy drink treat. 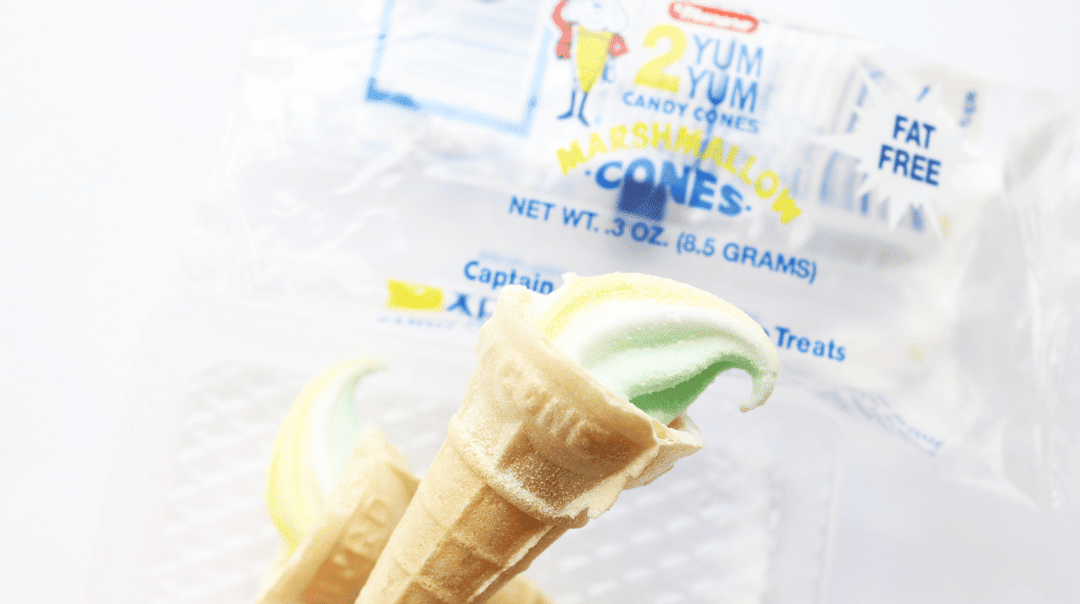 I remember having something similar to these at a fun fayre when I was a kid. They’re basically sugary sweet marshmallow shaped like ice cream in a sugary wafer cone. Very sweet as you can probably imagine! 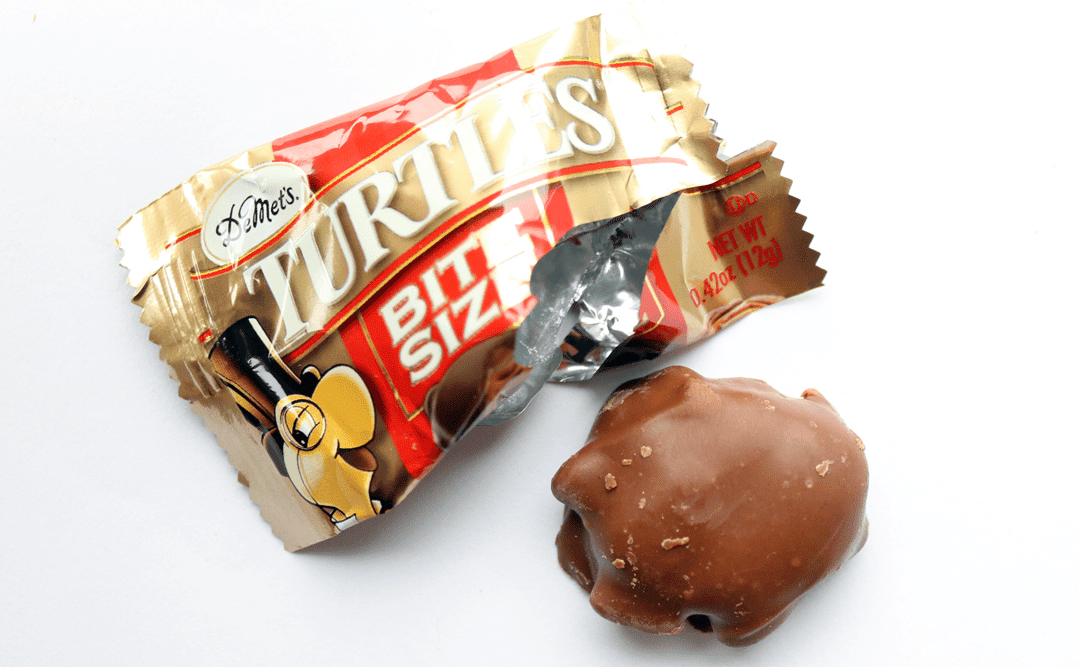 At the bottom of the box tucked away in the corner, I found this little guy – a DeMets Bite Size Turtle chocolate which has a caramel and pecan centre. It kinda looks like a turtle (sort of, maybe?!) and it tasted pretty good. 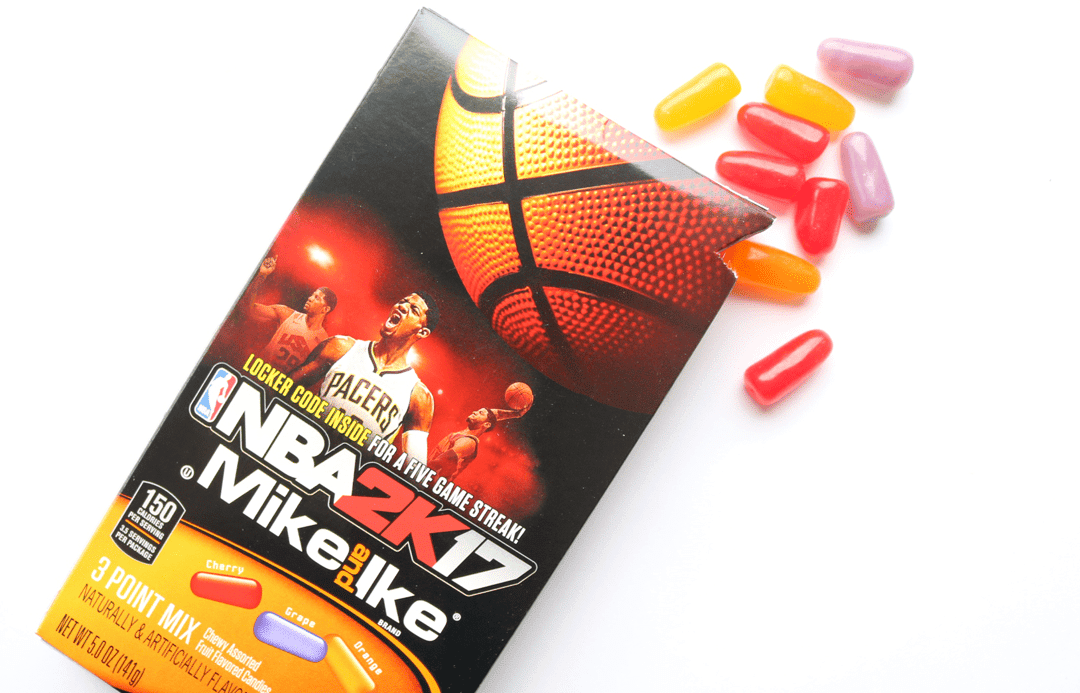 NBA is obviously huge in America, but it still strikes me as odd how sports companies sell sweets?! This box of candies featured three different fruity flavours; Cherry, Grape and Orange, and they had a good flavour with a soft chewy centre and a harder sugar shell coating. 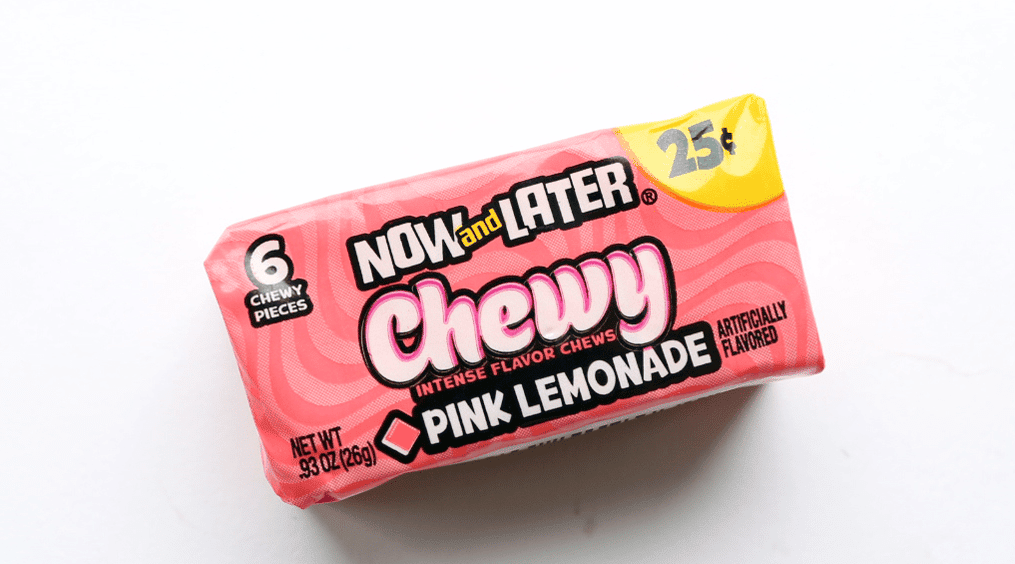 This mini packet of chews tasted just like Chewits that I used to buy at the corner shop as a child! Very fruity and satisfying as a sweet treat. 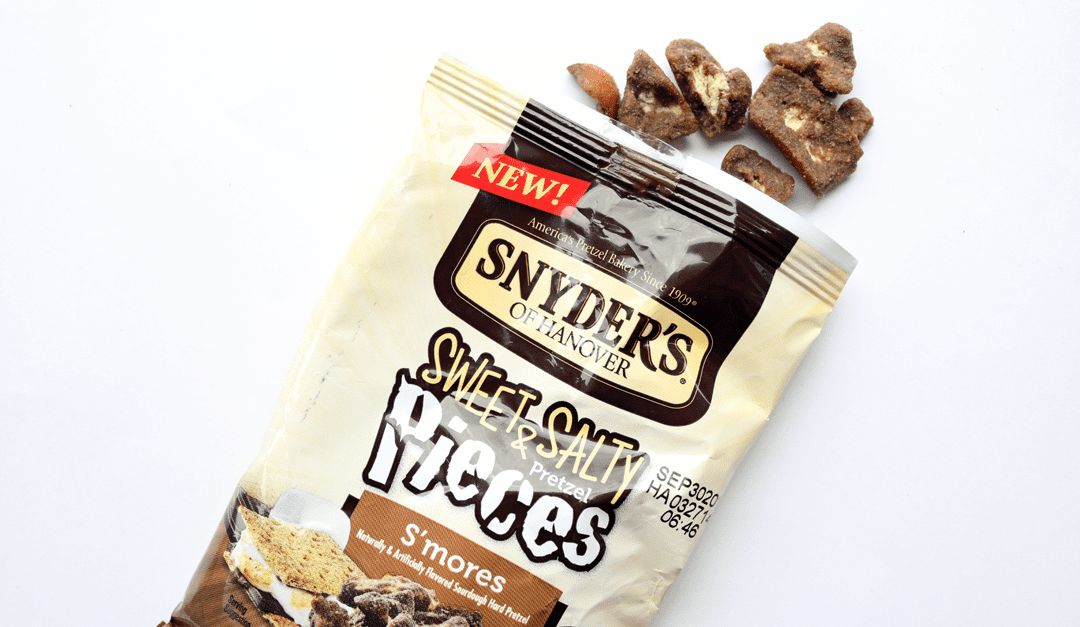 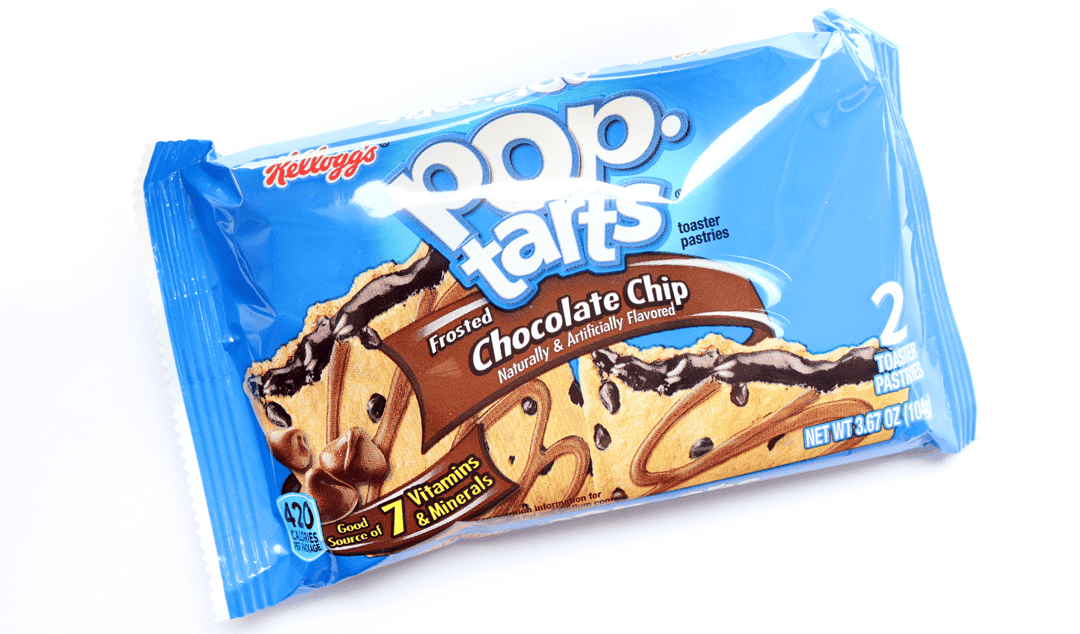 I’ve tried Pop Tarts before and I’m not overly keen on them, so I gave these to my sister to try and she liked them alot. She said that they were very sweet (but in a good way!) and had a rich chocolatey centre. 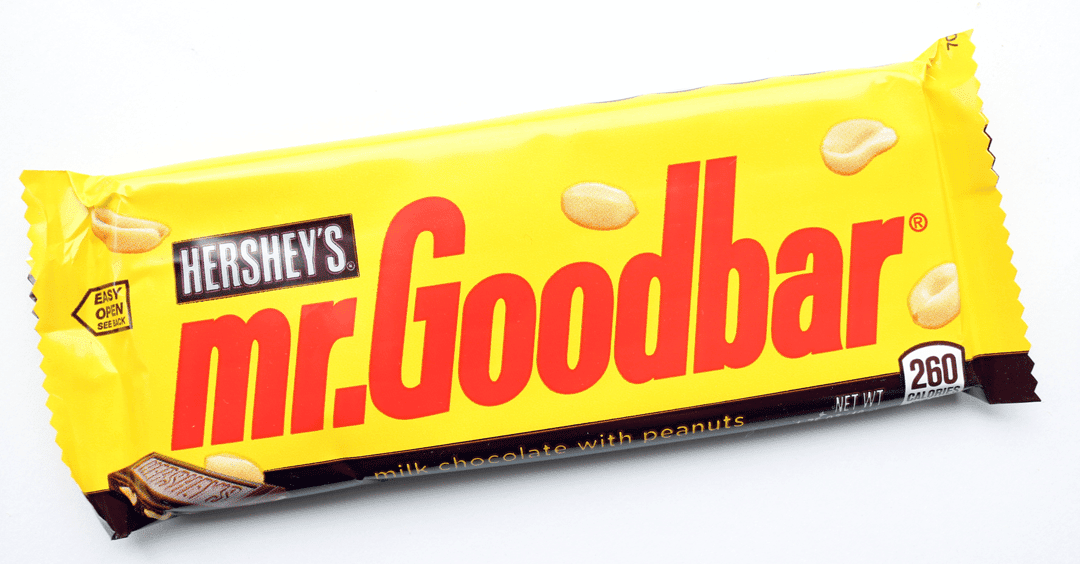 I hadn’t heard of this one before, but Mr. Goodbar is made by Hershey’s and it’s like a thin chocolate bar with peanut pieces. It’s pretty basic and not overly sweet, as I always feel like American chocolate is a bit more bitter than British chocolate, but it was good as a snack. 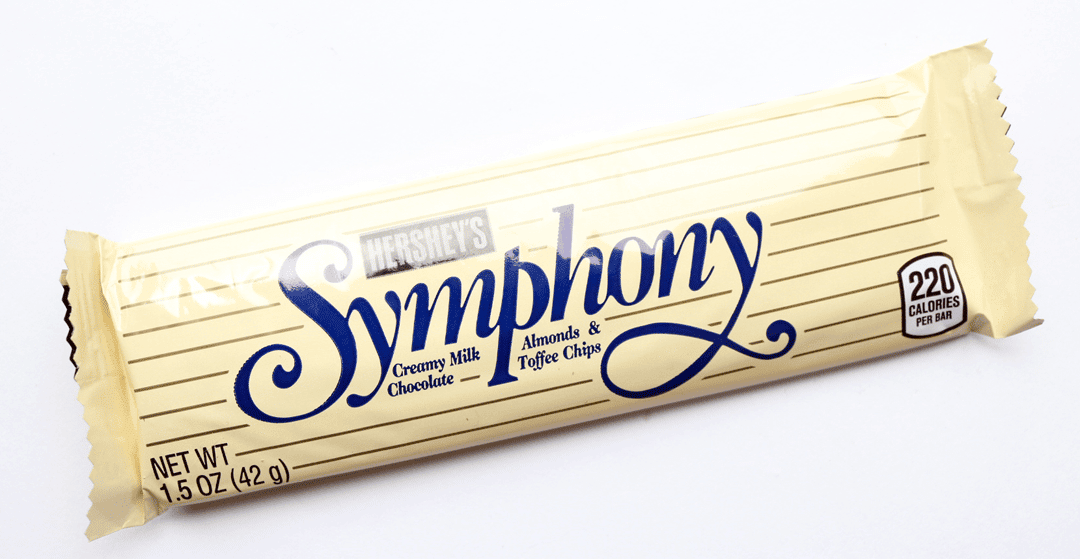 From the packaging, I expected this to be white chocolate, but it’s actually milk chocolate and it has tiny pieces of almonds and toffee chips in it. I really like this one – the extra toffee chips really make the difference with it! 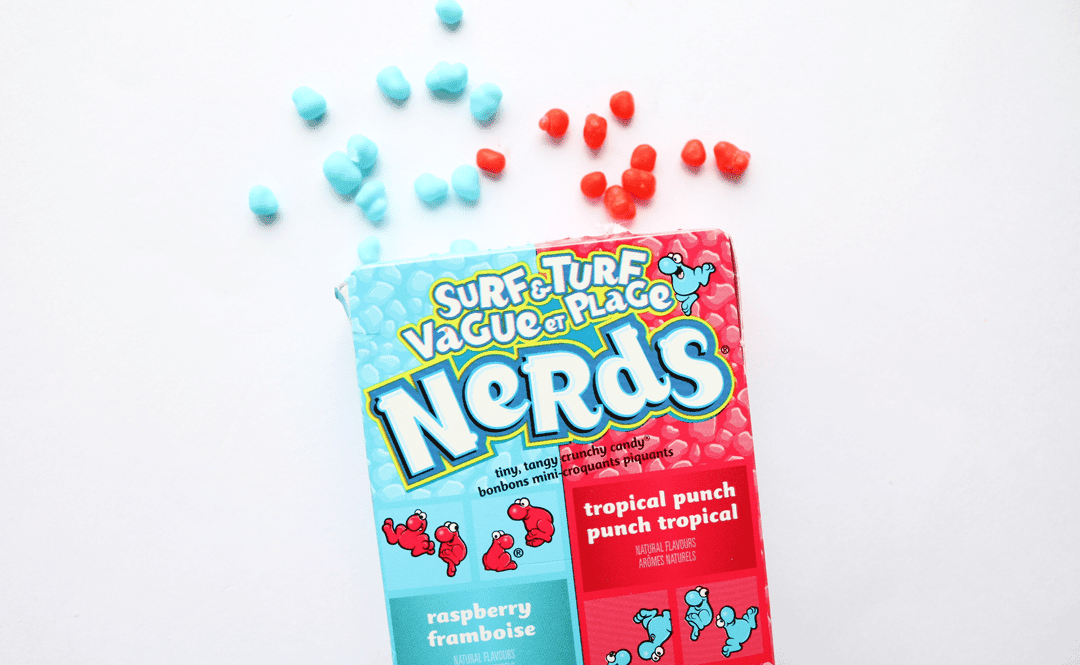 Now, these were a blast from the past as I haven’t had Nerds since I was about eight or ten years old! These crunchy little candy pieces are flavoured with either Raspberry or Tropical Punch as you get two sides in each packet, and they have an awesome sour tang to them. Loved these! 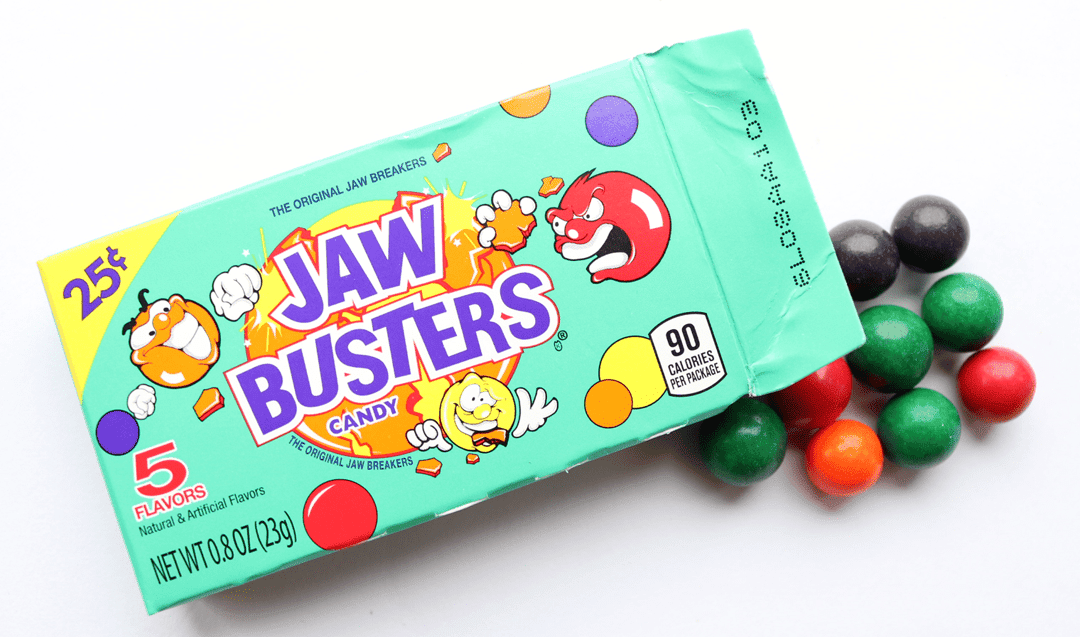 The last product that I tried from this month’s Taffy Mail box was a packet of Jaw Busters candy. This featured a mixture of five different flavours (mostly fruity ones from what I could tell) and these hard round little candies are the ‘original jawbreakers’ – ideal for when you want a sweet to suck on for a while!