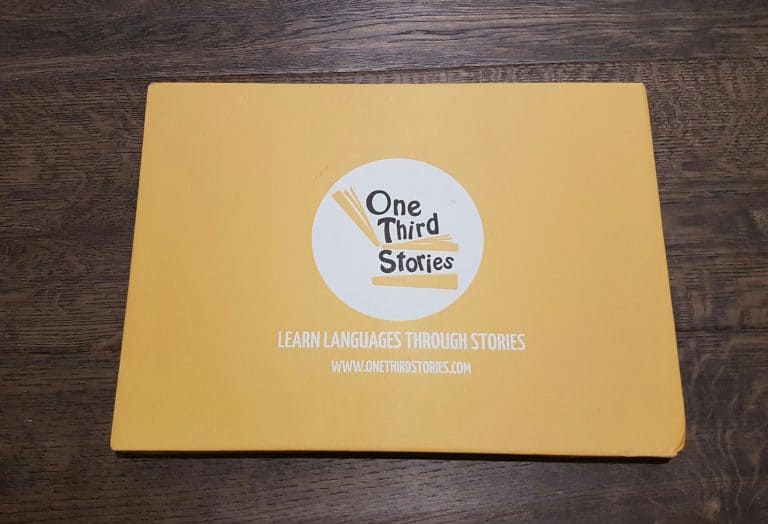 One Third Stories is a language-learning subscription for children aged 4 – 9. They have their own method of language learning called The Clockwork Methodology. Every month they send out a pack including a story book, audiobook, flashcards and activity book.  Languages available so far are French and Spanish.

My daughter Little C (age 6) was sent a pack to try out. I chose French because she has French classes at school, so the language was vaguely familiar to her. Getting her to say anything she has learned in school is virtually impossible, but I figured that every little helps! Plus we’re going to Paris at Easter, so anything that will encourage her would be very welcome.

A large cardboard envelope arrived! It fit through the mailbox just fine, which is always nice.

Opening it up, we found the following: 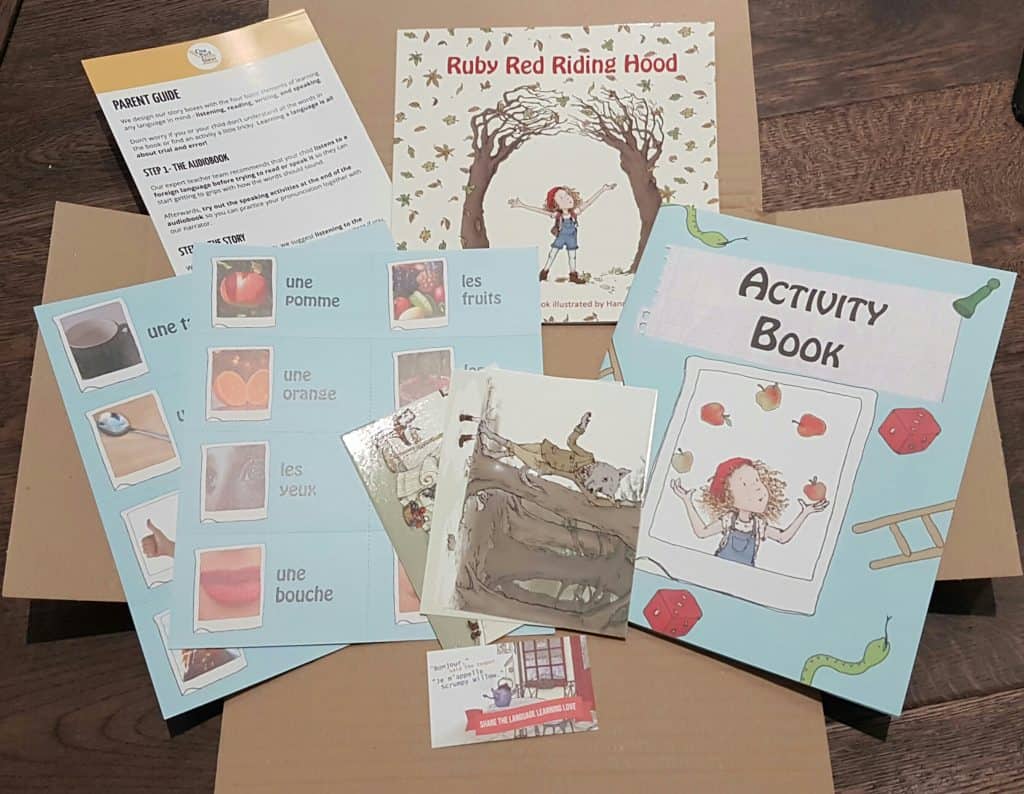 Now, you’re supposed to receive the audiobook of the story ahead of time. Initially I assumed it was a CD, and it hadn’t showed up, but it was actually a download, for which they would send you the link. Now, my email decided to reject whatever they sent me, so I didn’t get it before I received the pack. More on that later.

But anyway, we grabbed the story book, I searched the deepest recesses of my brain for GCSE French pronunciation (it wasn’t perfect), and I read her the story. It was very good, funny and entertaining. As you have probably guessed it is Red Riding Hood with a twist. I won’t tell you the twist, but it’s brilliant. Anyway, the trick is that throughout the story French words slowly replace some of the key English words. For example, you have ‘cherries’  which then changes to ‘cerises’. Near the end, a couple of short sentences are also added in. At the back of the book are a glossary of the French words, so you can look them up and practice them afterwards.

Incidentally, the illustrations are also charming.

The flashcards are pretty self-explanatory, you just need to separate them with the perforations.

The Activity Book was terrific. The various activities are designed to reinforce the language learning, but keeping it fun. Among other things it contained a wordsearch (Little C loves wordsearches), a recipe with a scavenger hunt for the required equipment with pictures and the words in French, colouring with the colour key in French (with coloured letters), and a couple of exercises for copying out and writing some words in French.

After I read the book a couple of times, Little C got into the Activity Book.

The next day I was able to get the download link so we could listen to the audiobook properly. It was read by a Frenchman, so I was reminded how ropy my accent was. Oh well, Little C didn’t seem harmed by it. As well as the story there were a few exercises at the end, including listening to some key words and phrases in French and English, and then repeating them in French. Little C actually did this, and rather enjoyed it. I was quite pleased by her pronunciation, clearly she is learning something at school. (She also had remembered the words I had pronounced incorrectly when reading it myself, and remonstrated with me. Huh.)

I think as a regular monthly system this would work very well. Presuming the future stories are of similar quality, I think children will be both educated and engaged by them, and whether they are already learning at school, or if you simply want to introduce language learning to your home, they are a splendid introduction to a foreign language. Little C has retained some of the vocabulary she learned in the last couple of days, and we will keep using this book and activities to keep it up! I’ll also play the audiobook on our rather long school run. Only having one story/book is of course slightly limited, but nonetheless it will be useful. As part of a series it would be perfect. We haven’t yet used the flashcards, but it’s possible we will (though I’m always slightly resistant to them because they remind me of the Rick Moranis character in Parenthood). In any case, they’re useful to have around.

As I said, Little C is 6, but I’m sure older children would also enjoy the story and activities. It was also useful for me to brush up on my very rusty French; I was pleased that although my pronunciation was dodgy, I remembered and understood all the French. Having said that, a parent who knew nothing of the language in question would learn along with their child, as regardless of its child-oriented style the learning principles apply to adults as well.

I think the audiobook is absolutely necessary, and while it wasn’t a particularly big deal that we didn’t get it when we should have, it would have been nice to listen to in the car before we looked at the book. However a regular subscriber would receive all the links automatically, so absolutely listen first.

As to price, as usual a longer subscription works out cheaper per month. If you want your child to gain some familiarity with a language, or support their school learning, this is a great method. And hopefully they won’t find it overtly organized educational-ish, so kids can enjoy themselves with bonus learning rather than simply endlessly conjugating verbs [shudder].

Anyway, a terrific way to combine learning with fun, and great for all the family!

How would you rate One Third Stories ?