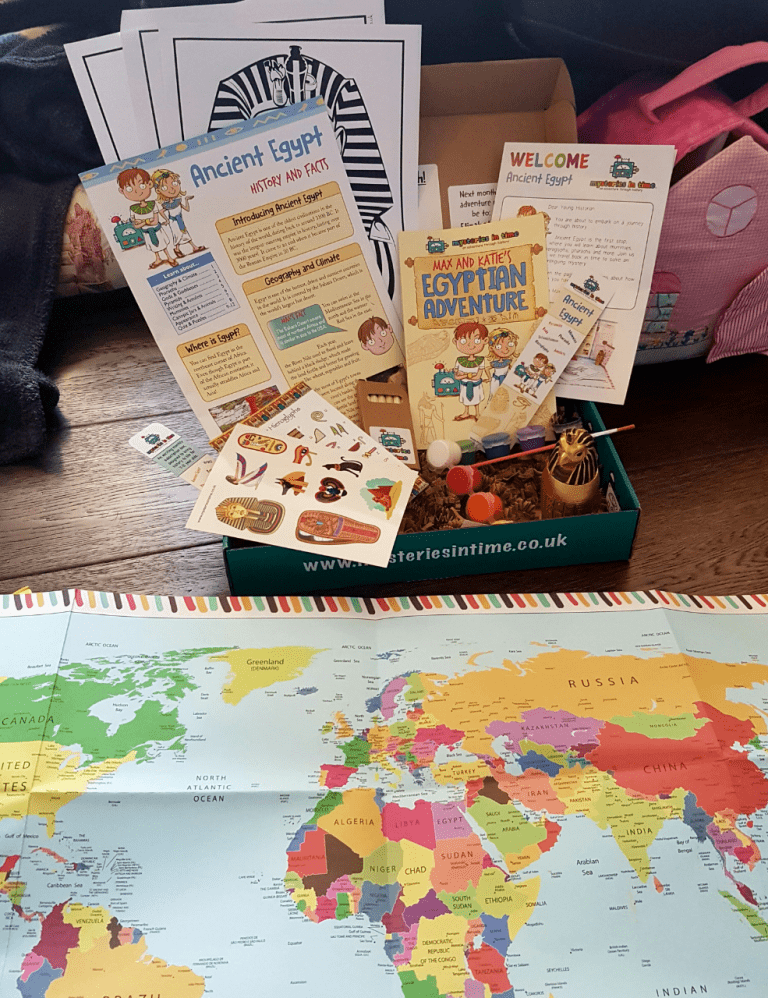 Mysteries in Time is a fun educational subscription box series for kids age 7 – 11. There are two options: the Classic Pack is £7.95 + 99p P&P, and the Bumper Box, which has a few extra goodies, is £12.95 + £2.95 P&P, which makes sense as it’s rather bigger and heavier. You can also prepay for three or six months at a small discount. There are series of historical topics covered, starting in Ancient Egypt. Other stops in history include Elizabethans, World War 2, Ancient Greece, the American Wild West and the Aztecs. The boxes contain a mixture of things to read, learn, and do.

The box I received, the Bumper version, was Ancient Egypt, the first in the series. The first comment I would like to make is that it is absolutely brilliant.

My daughter, C,  is six, so technically under the typical age range, but she’s a great reader, loves Ancient Egypt (we always visit the mummies when we go to the British Museum), and is very keen on crafting and general art stuff. So I figured there wouldn’t be any problems. Plus this box would be suitable for under-sevens anyway, because there is lots that parents can help with and with which they can participate. I have to confess that I loved this box myself, and would totally have worked my way through it on my own. My husband was also seriously impressed.

The general concept is of a Time Machine, and the box itself is wonderfully designed to look like a cartoon machine, and it of course has your child’s name on it. Nothing like a bit of personalization! 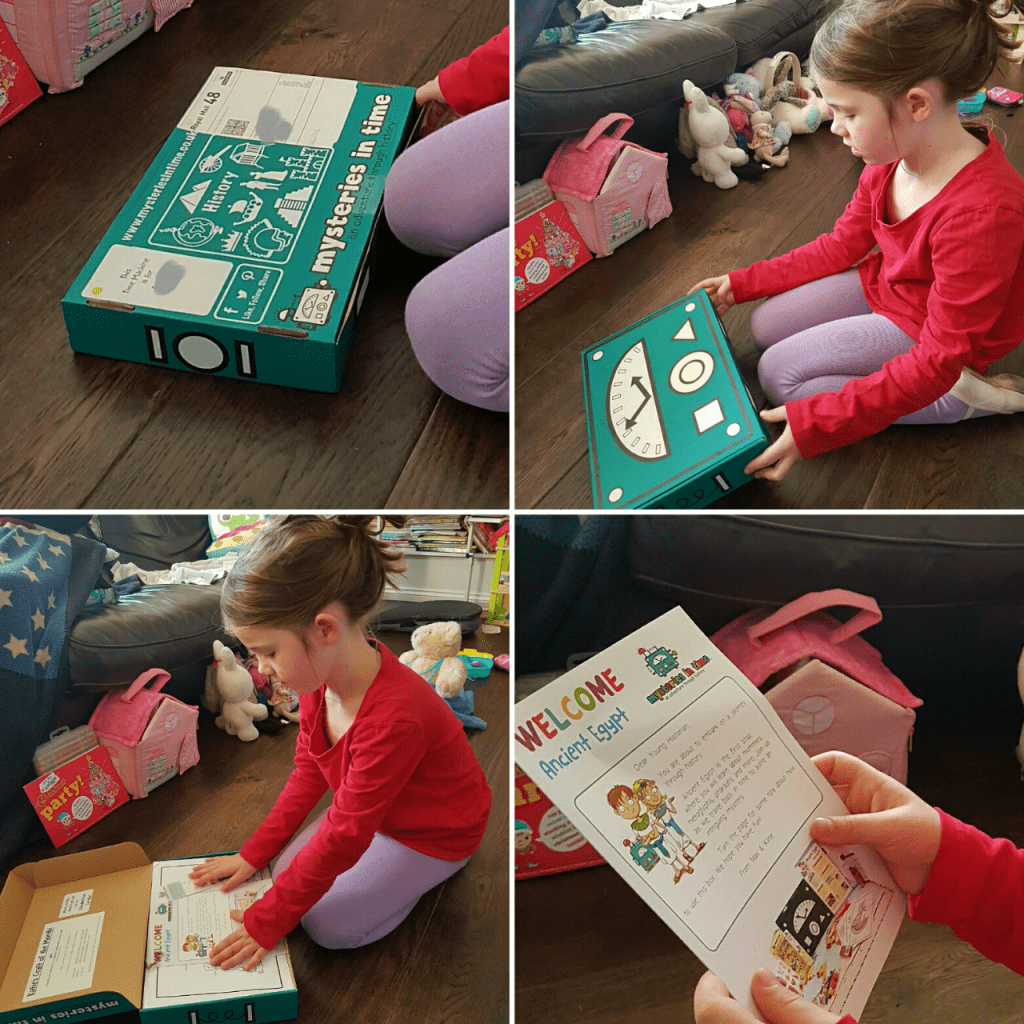 On top is a bookmark, plus letter to the recipient, which opens up into a list of contents and tips. There is an excellent variety of items. The first things out were some colouring sheets, which we put aside so we could check out the map first. The map is huge, on good-quality paper, and beautifully detailed. There is a timeline at the bottom, to which you can affix your first sticker, figuring out where it will go. C had a great time locating Egypt on the map, and then checking out various other countries we’ve visited. Assuming you have the wall space, this would look terrific displayed, and of course it’s a great piece of general reference material. 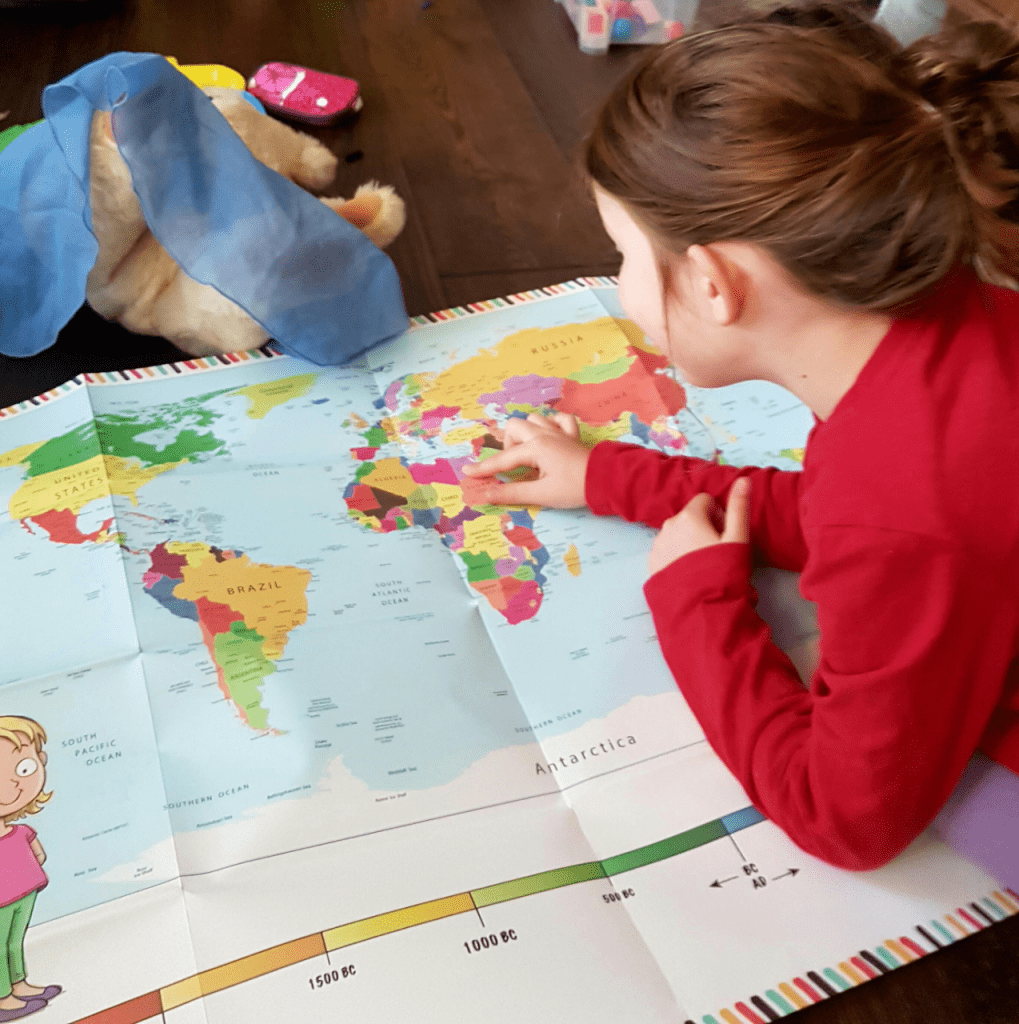 Here is what was hidden under the map and colouring sheets! 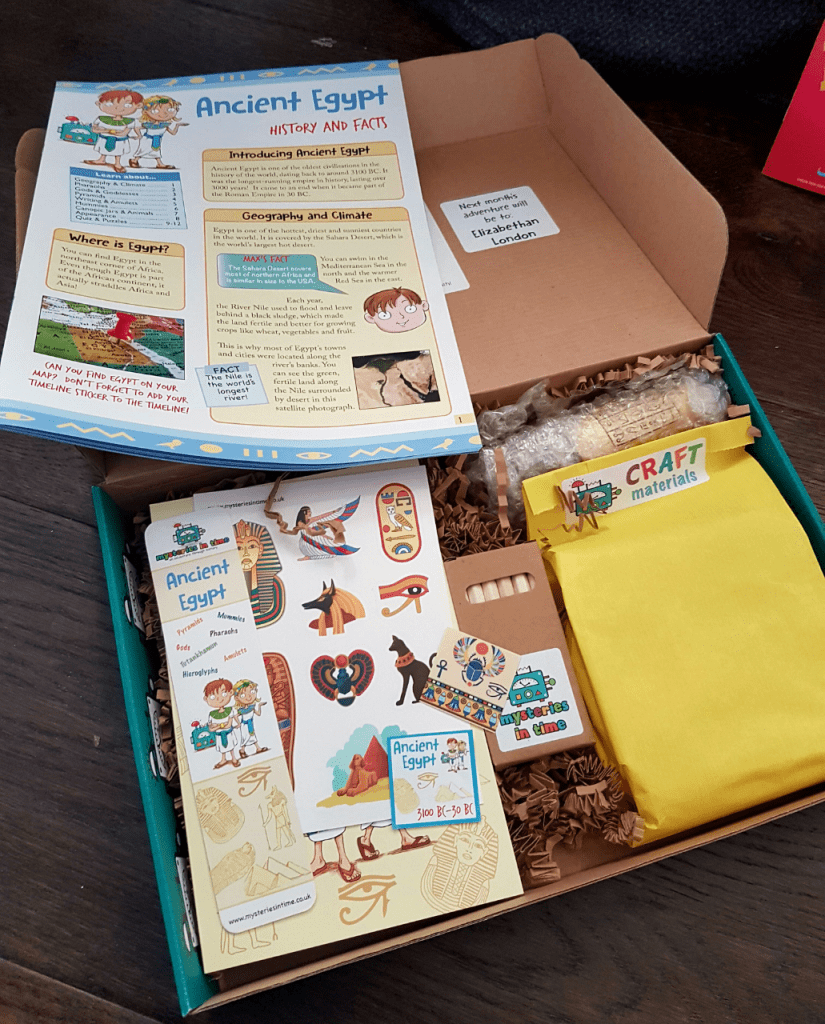 More stickers, a book, colouring pencils (nice quality too!), and a couple of mysterious packages. C immediately pounced on the Craft materials bag. Anything crafty is like kid crack, and this did not disappoint.  I didn’t manage to get a proper picture of the contents before they were torn into, but , this was the idea:

The craft was making amulets, which were described in the welcome sheet. There is also information about amulets in the ‘History and Facts’ magazine (which is hiding underneath the sticker sheets in the picture above). The bag contained paints, stick-on jewels, and a remarkably generously-sized block of air-drying clay. There was definitely enough clay for all three of us to have a go. 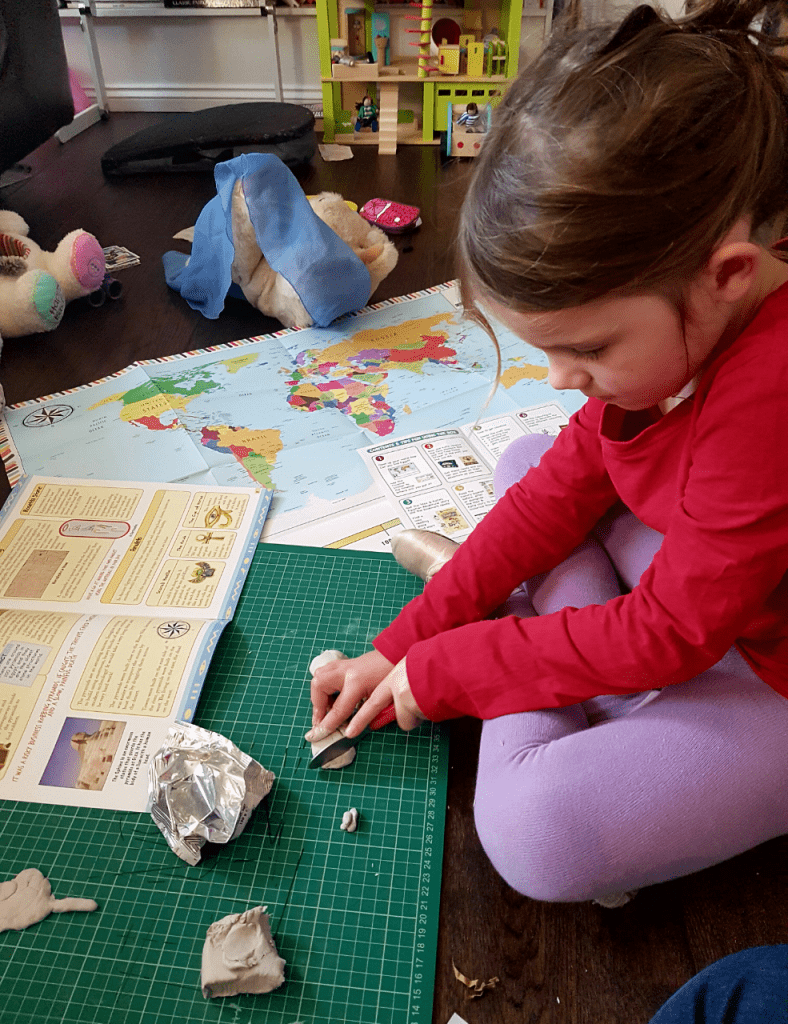 Our efforts, it must be said, weren’t exactly impressive, but we did enjoy it! I think of all possible crafts we are all least good at modelling and sculpture. Also, air-drying clay is rather harder to work with than plasticine and PlayDoh, but we persevered with our various attempts. You have to wait 24 hours for it to dry, so below are our unpainted efforts. 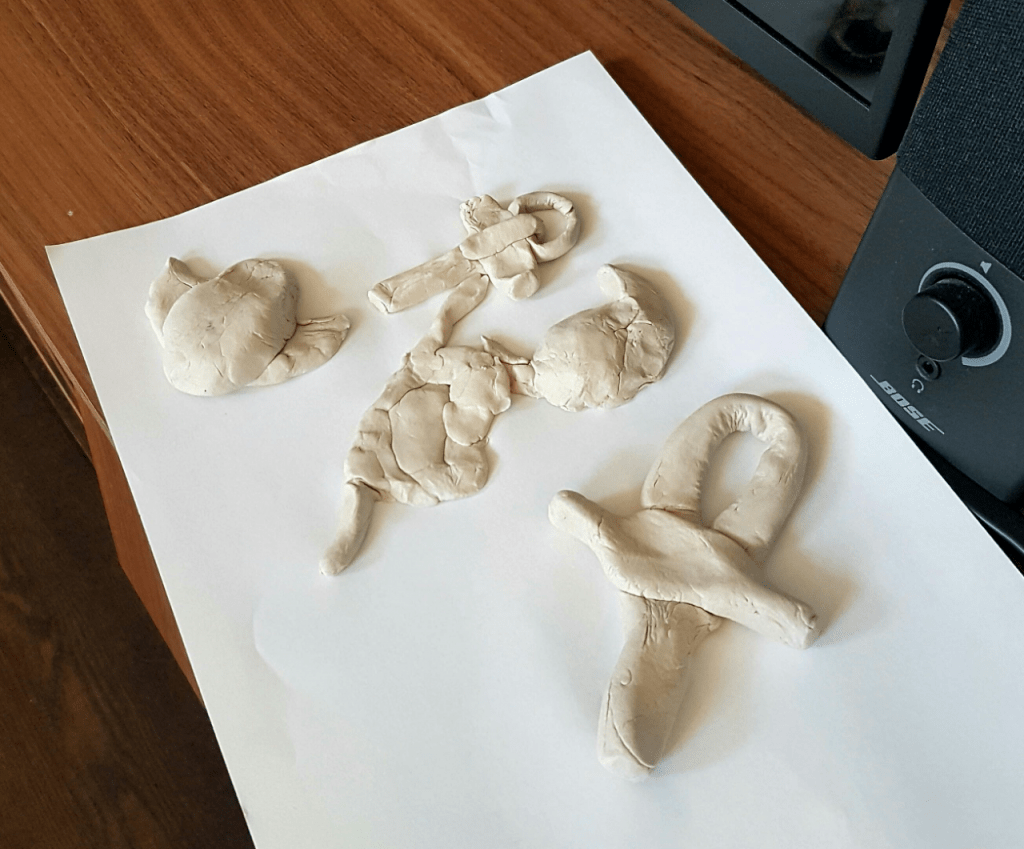 You can work out for yourself which ones were made by whom.

Also in the box are the previously mentioned information magazine/booklet containing history and facts. There are plenty of illustrations, but the contents themselves are informative and easily understood without being simplistic. They also don’t shy away from properly describing the mummification process, from which C derives a great deal of grossed-out entertainment!

The included book features two characters, Max and Katie, who pop up in other parts of the various sheets and magazine. The story is a fun mystery where the two kids go back in time to solve a mystery in Ancient Egypt! It’s a great adventure, and includes lots of things that are part of the history and facts magazine, so kids can use the stuff they’ve learned to become more immersed in the story. It’s a very clever idea, combining learning and reading for fun. Plus there’s mention of squelchy brain removal to delight children of a gruesome disposition! (I have one of those children myself. What is it about gross stuff that kids get such a kick out of?)

The final goodie in the box is a little reproduction canopic jar. In case you didn’t know, these were the jars used to store people’s insides as part of the mummification process. This one had the head of a falcon, Qebehsenuf, and would have stored the intestines. Don’t you feel happy you’ve learned that?

So in conclusion, I am enormously impressed by this box. It’s a wonderful combination of proper educational stuff and fun things, with plenty of interesting and informative details, but nothing dry or uninteresting. The illustrations are bright and clear, and the layout is easy to read and extremely well thought out. It would work for kids who like to take a book into a corner, or those who like to jump in with learning through colouring and making. Because of the fun and colourful nature of the contents, its educational aspect could be considered quite sneaky, so it would work very well for kids who might be a little resistant to something which is very obviously ‘educational’!

The value is splendid. As I said, this box is the Bumper Box, which including P&P is a little under £16. As a monthly treat it is well worth it. Because there is so much stuff to do, it will cover at least a weekend’s worth of activity, and the book, map, jar, and magazine have use far beyond the immediate time.  Although it’s now a little close to Christmas, this would be a fantastic gift at any time of the year, for almost any child. Parents can definitely get involved as well! And you could even give this as a fun gift for an adult; after all adult colouring is a thing now, so why not fun history-oriented stickers, books, and activities? The quality is easily high enough that it wouldn’t look hokey or silly.

As far as I can tell from the pictures on the website, the extras in the Bumper Box are the canopic jar and the amulet-making craft.  If your kid isn’t particularly interested in making stuff then the Classic version would probably be fine. But I think the extra few quid for doing something extra practical and creative, and also having a really nice, and unusual reproduction item, is worth spending. The extra items could easily be incorporated into creative and storytelling play. But even without those bits it’s extremely good.

In conclusion, I can highly recommend this box. As an extra bonus, the makers, with whom I exchanged a couple of emails, are super-friendly and helpful. They’ve clearly given a great deal of thought to how this works, the value for money is superb, and if the rest of the boxes are to the same standard then I suggest you just go for the whole series. (As I said above, there is a small discount for multiple months prepaid.)

I’ve tried to think of a reason to knock off a couple of marks, because having a 10/10 review is pretty unusual; I’ve never done one before. But I couldn’t think of anything that was less than awesome: the contents are amazing, it was packed and presented really well, the delivery was fast, and the value was impressive. Oh well, perfect score, congratulations Mysteries in Time!

How would you rate Mysteries in Time ? 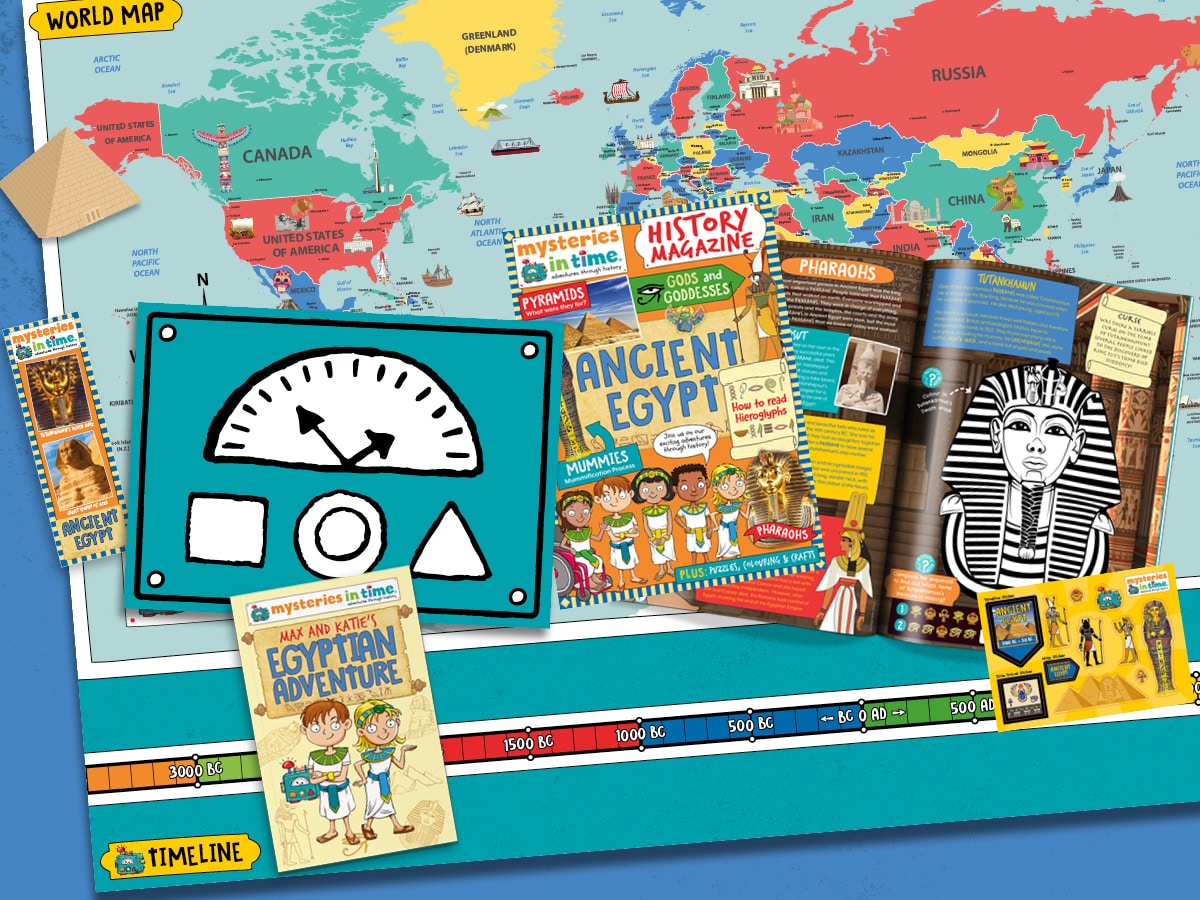 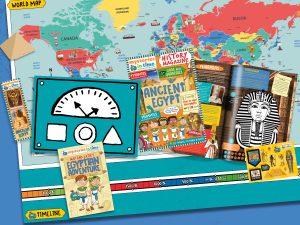