Reviewed by All Subscription Boxes on 10th December 2015 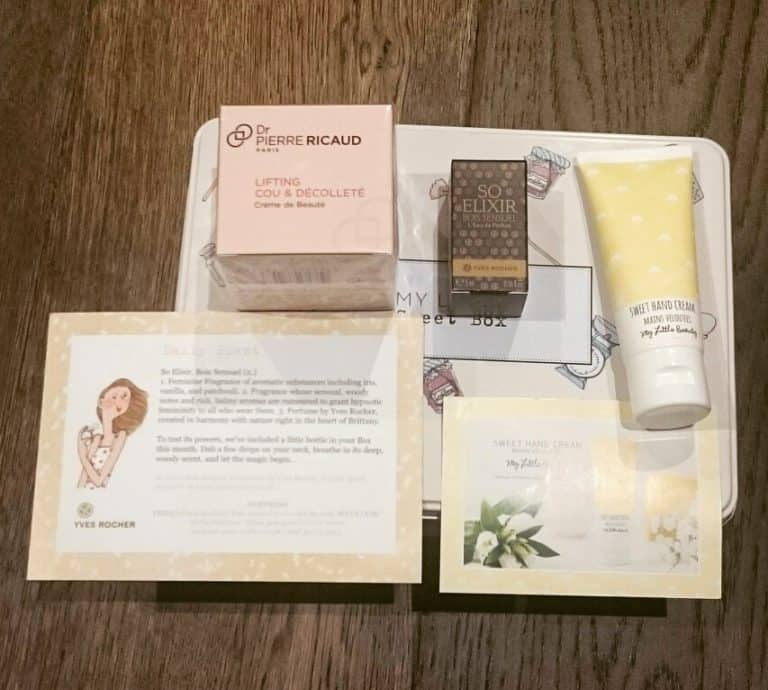 Chef’s apron
This is one of those aprons that tie round your waist and cover from your middle to just above the knee. It is nice thick quality cotton, with a pocket, and quite attractively decorated, but ultimately not particularly practical. When I’m cooking I get just as much mess on my top half, and this doesn’t protect you at all.

Sweet Hand Cream by My Little Beauty
The cream itself in nice, quite rich without being greasy, but contrary to what the name would imply it doesn’t smell sweet at all. It’s kind of a neutral smell, not exactly unpleasant, but I wasn’t crazy about it.

Neck and Décolletage Lifting Cream
Well, it smells OK. Supposedly it ‘contains an invigorating formula of active ingredients that plump and perk up skin cells’. Hmm. Much like many moisturisers. I guess if you’re someone who uses a separate cream for that area then this would be nice. For the high-maintenance lady.

So Elixir Bois Sensuel, Fragrance by Yves Rocher
A 5ml sample size of this perfume. I wasn’t crazy about it; Yves Rocher makes me think of old people and the 1980s, and the smell was definitely not my thing. And it was a sample size, so basically a freebie.

Tin
A nice tin, branded with My Little Sweet Box. Could be good for biscuits or (rectangular) cake. Don’t know how airtight it would be, but storage tins are always useful.

Jar Decals
These were preprinted clear labels for your jars. Very hipster. Attractive if you’re into that kind of thing. I didn’t realise what they were as they were in an envelope, which I very nearly thought was something binnable. But I opened it just in case, just as well.

Fold out poster magazine
Contained the usual array of adverts, Instagram-type pictures, plus an interview with a French food blogger. Also four recipes. The fold out thing is annoying. If I’m going to read something, then I don’t want to be finding some place to fold out an A2 sheet of paper. If it’s supposed to be a magazine, for heaven’s sake make it a proper booklet. 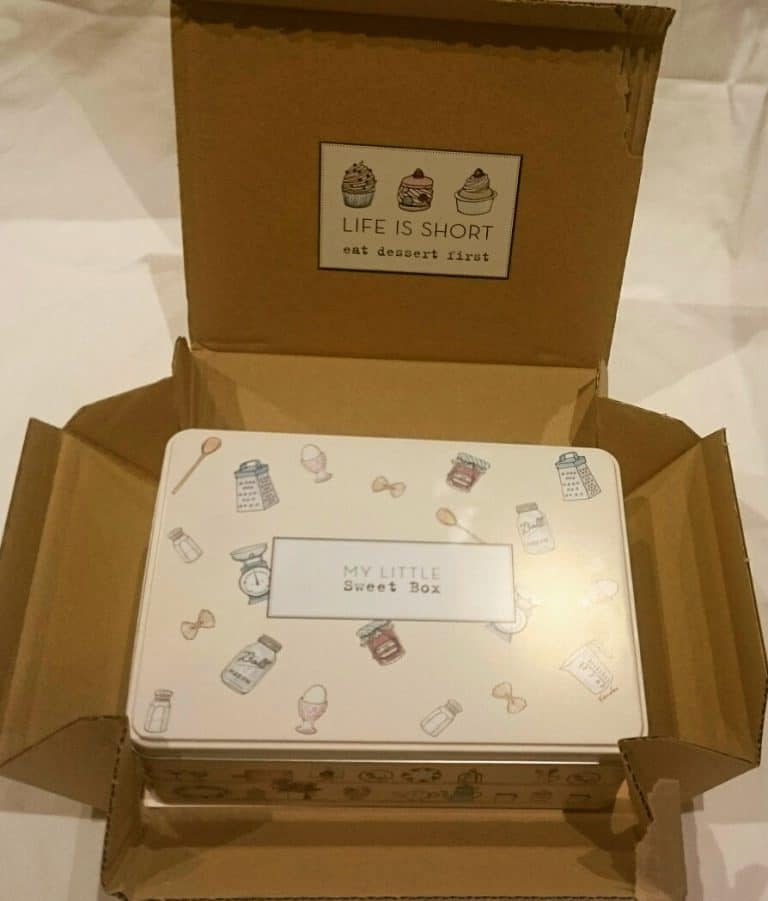 They really need to put My Little Box somewhere on the outer packaging. Then when it arrives you can start to think ‘oh goody, a lovely box of nice things for me to open’, rather than ‘oh crap, was I drunk-ordering on eBay again?’

The tin was right inside the cardboard packing box. Under the lid was the poster magazine thing, then the folded apron, then the beauty products. At the bottom was the product cards, stickers in their mysterious envelope, and also a card with a little envelope stuck one with ‘Surprise!’ printed on it. I was hoping this was an additional exciting thing, but actually it was a helpfully preprinted gift card should you decide to buy someone a My Little Box subscription. Yeah, I’m not going to do that.
There wasn’t an actual menu in this box, but they do have a couple of cards with a little bit of info about the beauty products, plus prices. They also had the prices of the non-beauty things (tin, apron, labels). 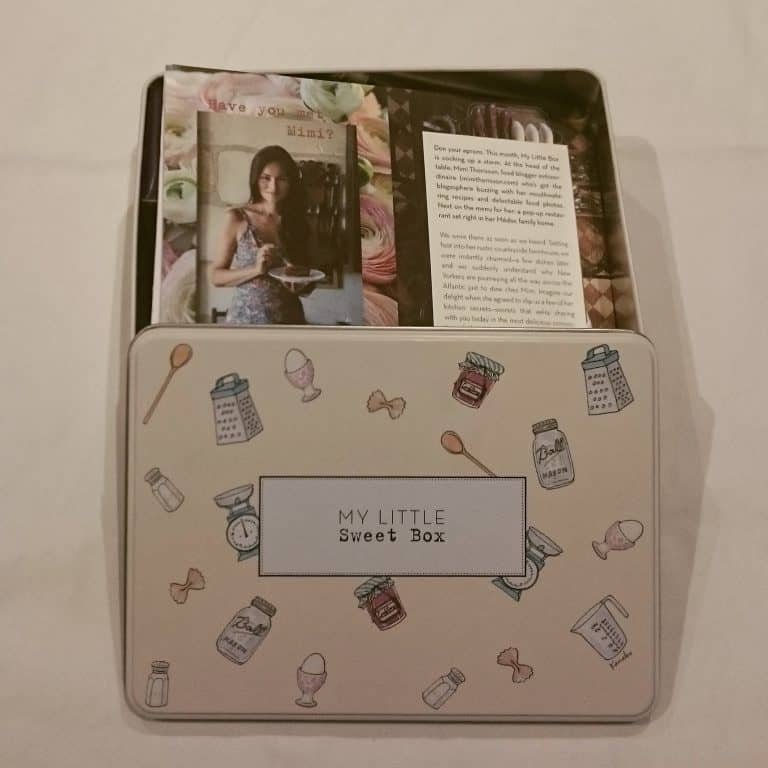 I was slightly disappointed that the initial lid-removal wasn’t very exciting, as all you saw was that poster thing. The previous box had a little art card (with slightly cheesy quote) and the whole thing was tied with a ribbon. A small detail, but it looked very inviting. This one, not so much. 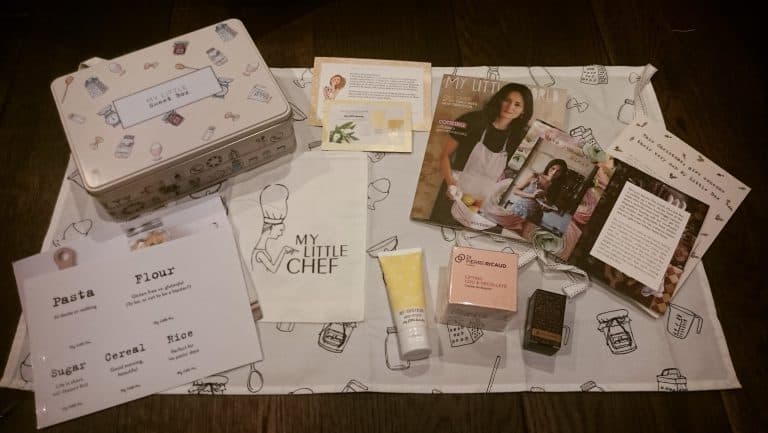 So, even this is on paper good value, and I’ve got a nice tin and a couple of useful-ish things, I somehow still feel slightly cheated.

This might be because I loved the previous box, because I wanted to use everything in it (the tote bag lives in my shopping backpack and the body oil smelled so delicious I have to stop myself from using it all up immediately).
But this, well. First of all, the name, My Little Sweet Box. The various teaser pictures posted on Facebook and Instagram all seemed to be hinting at something edible, or baking-related, artfully scattered flour, quotes about chocolate and suchlike. So I was expecting/hoping for at least something sweet inside, even if it was just a Ferrero Rocher (it’s a French company, what can I say). But no.

OK, so there’s an apron, but it doesn’t cover you up properly, it’s more the style that someone wears when they want to look like they’re doing something domestic but actually wouldn’t touch a wooden spoon if you paid them. They call it a chef’s apron, and chefs do wear that style (though google it and there are way more bib-type aprons), but they wear clothes underneath that can also get covered with food. It might be handy for wiping your hands while cooking, but it’s not going to do much above the waist. I’m more likely to cut off the strings and use it as a dishcloth. 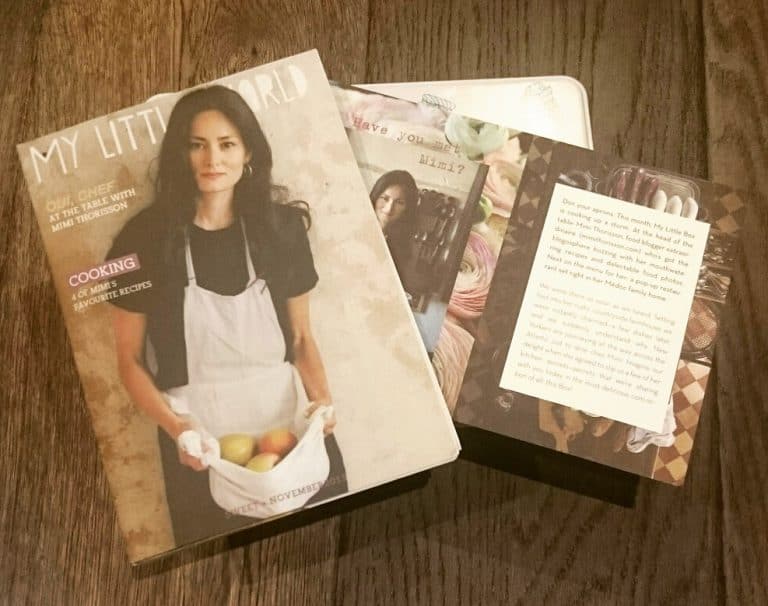 And the beauty things, well, hand cream is always handy, though I didn’t like the non-smell much, and like I said before, it wasn’t sweet! Décolletage cream? Now that’s high-maintenance. I’m not sure I know anyone who has a separate cream for that particular area, and it wasn’t even SPF, which at least would be practical, as that skin area is delicate. And a perfume sample? Huh. I can get those at any counter in Selfridges. And it smelled like my Nan.

As for the decals, they are really something for people who post pictures of their kitchen shelves of Instagram. Should I ever get around to decanting my rice, coffee, and pasta into attractive jars then I might use them. If I can find them, as they’re the kind of thing that could get lost pretty easily.
I did like the tin, as I like the fact that I can keep and use it. Though not for sweets as I don’t eat them.

Oh and that bloody folding magazine. That’s SO annoying. I felt the same thing last month. Seriously, I’m not a teenager, I don’t want a poster. I want something I can read on the loo or in the bath. Though the whole thing took about six minutes to read from cover to cover. The interview with the food blogger was OK, as were the recipes, but nothing I couldn’t live without. And the recipes were meringues two different ways, watercress amd potato soup (they called it Velouté but c’mon, it’s soup) and Duck Confit Parmentier. This is basically shepherd’s pie made with duck confit. Nice enough recipes, but frankly nothing exciting or unusual. And with the exception of the shepherd’s pie, I’ve made all of them before without bothering with a recipe. Maybe for someone who doesn’t cook they would be nice, though I’ve found that people who don’t cook are scared of meringues. Not in a phobia-type way, but in an ‘oh aren’t they really difficult’ kind of way. Rather like mayonnaise. For the record, both meringues and mayonnaise are easy. And economical, as you use the whites for one and the yolks for the other.
But I digress. 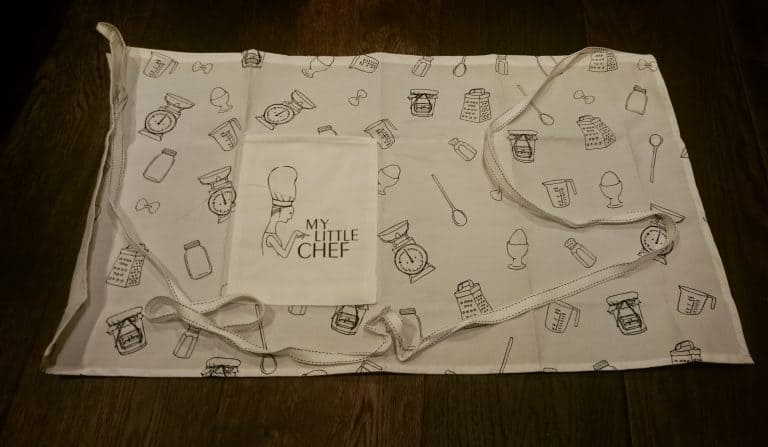 So really it was kind of meh. And at the risk of sounding incredibly shallow, the reason I started out feeling meh, and continued to do so as I unpacked, was because I couldn’t really see much of a link between the theme and the contents. And none of the contents made me feel particularly excited. Instead, I was immediately criticizing every single one as not being quite right. And the one thing I properly liked, the tin, wasn’t a surprise because it had already been trailed on Facebook etc. So I already knew I was getting a tin, which meant that any potential excitement was negated by previous knowledge. Also, though I was pleased to see the tin when I opened the (unbranded) box, what was inside didn’t look pretty. No little ribbon to undo or tissue to unfold. The first thing I saw was the poster-magazine, which (as you have no doubt realized) annoys me.

Deepening my shallowness, I really think that if there had been something edible in there (wouldn’t even have to be Ferrero Rocher, a Quality Street would have done) I would have immediately felt pleased. Ooooh a little something sweet in my little sweet box. Yummy. 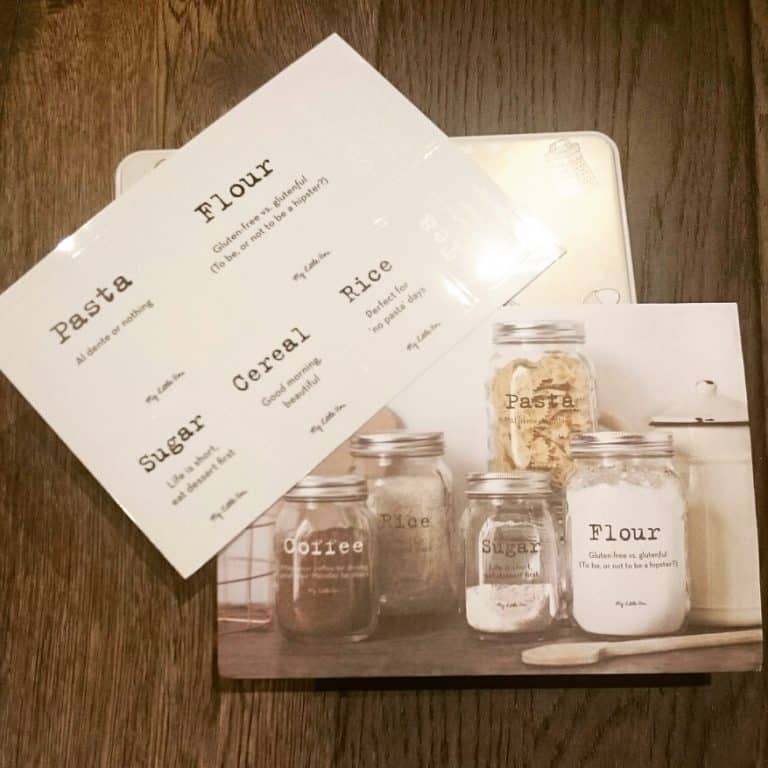 I got last month’s My Little Box as a gift, and as I loved it I thought I’d get another one for myself. I even filled out the questionnaire on the website for subscribers, which as far as possible put me in the low-maintenance category. So décolletage cream is not the greatest choice for me.

I do realise this is a type of beauty box, though looking at previous boxes there was also emphasis on the gifty-treaty thing. This time those things didn’t excite me really, and the beauty products didn’t do much for me either. It was an example of the total being less than the sum of its parts. Which is kind of a shame, though it’s possible that this is not really my kind of thing. Which is why I’m not bothering keeping up the subscription. 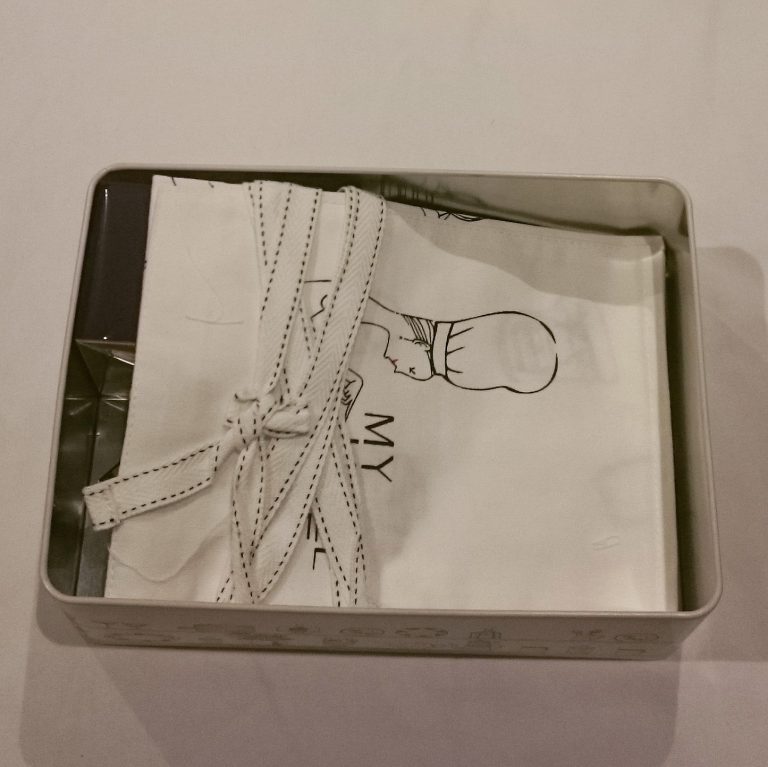 Value-wise, it is good on a purely monetary level, but of course I think these boxes are more than that. I know it was only fifteen quid, and it should pretty much feel like a bargain, and I guess it is. But you’re supposed to feel like you’re giving yourself a present every month. Well, this time I didn’t like my present much, thanked myself in the tone of voice used by those who are given vests for Christmas, and tried not to resent myself for giving it. I would sooner have spent my fifteen quid on a couple of bottles of wine. Or prosecco if I was feeling fancy. Obviously you’re not going to get decent champagne for that money.

I think for many people, especially those who have an abundance of lotions and potions for each individual part of their body, this box would be just fine. But I think the company missed a trick with the theme (same for last month’s, but I didn’t care then because I loved the contents) and set up expectations that perhaps were not followed through, and ultimately did not satisfy.

How would you rate My Little Box ? 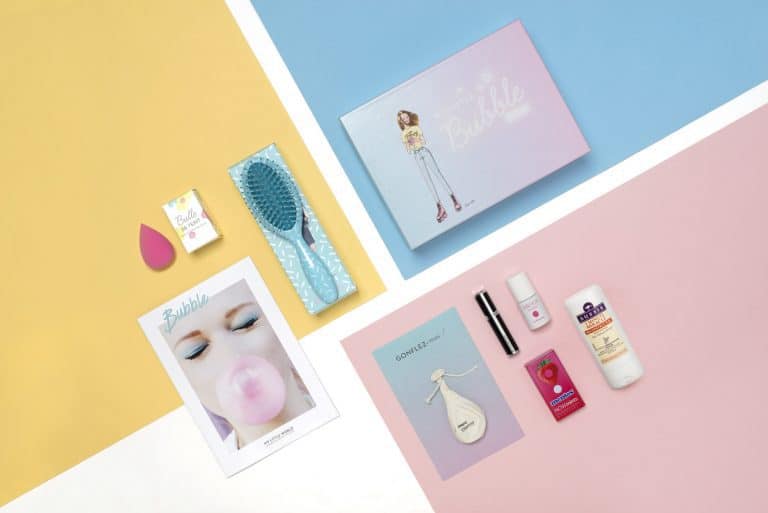 About All Subscription Boxes 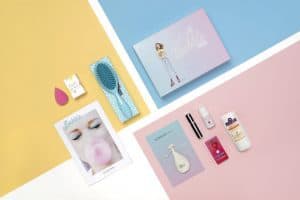