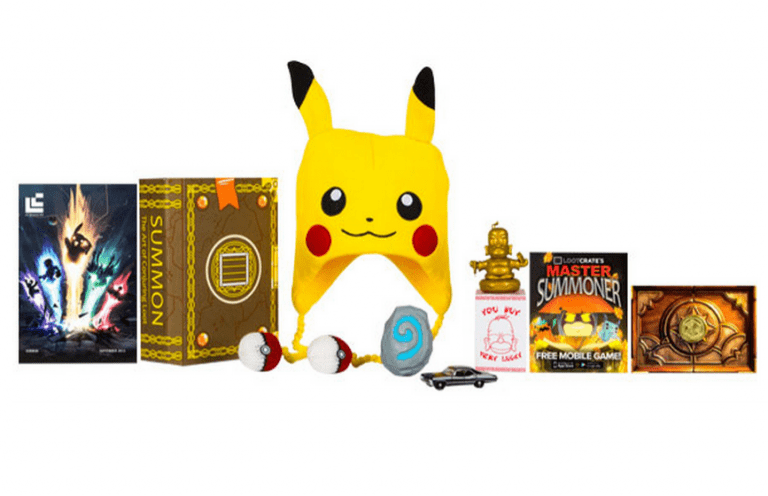 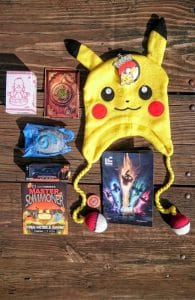 This month’s loot crate is brought to you by summoning; the theme is from all things connected to merchandise based on summons. There are a number of fan favourites included this month, we have Pokémon, Supernatural’s, Hearthstone and weirdly The Simpsons.

I can see where the others get the summons theme but The Simpsons is loose, maybe summoning has happened in an episode or two throughout the monolithic series run that The Simpsons has had but it’s a reach in my opinion. However, I really did like The Simpsons item so I’m split between liking and disliking the inclusion. If they are going to be so loose with the themes then why bother? Better to stick with proper theme items to make it legit.

Let’s talk about the items, you could say that there are six items this month but I’d combine two of them under the label of download content so I’m not sure if they count. I think my favourite item has to be the Homer Simpson mini Buddha figure from Kidrobot. 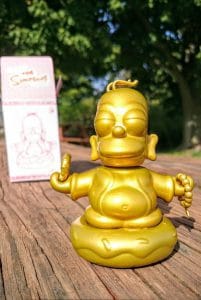 The figure is in the 3 inch size range, so that would be the regular Kidrobot figure size. It is hard to put a price on it because I believe it is a limited run so depending on how sought after they are the price will vary. It looks like it was previously made for San Diego Comic Con and has now resurfaced as an item in Loot Crate, it’s not available for general sale so it’s a nice semi-exclusive pick-up for Loot Crate, I love Kidrobot items and I love this. Expect the usual Kidrobot quality in regards to this figure, which is great.

Next up is the Pikachu hat, my wife’s favourite item from this month. I would say this is not something I would be interested in wearing but my wife thinks it is great and it is a nice inclusion just in time for winter. The material itself is a blend, so don’t expect 100% wool, it will make your head sweat but in this age of sub-par quality most ‘woolly’ hats will do that so it’s not a deal breaker. 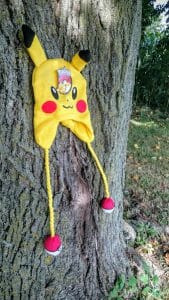 Apart from that, the hat seems well made as there aren’t any stray strands of material, it is solid and warm so overall it’s a good pick-up. It’s not really the Pokémon item I was hoping for because I am a big Pokémon fan and the item wasn’t really for me but it’s better than a sweatband, I think.

The next item is somewhat contentious, it is the Supernatural’s car replica (not life sized). The contention was in regards to its Loot Crate exclusive label which some people thought was ill-deserved. Some users on online forums mentioned that the car was not an exclusive because they had bought one that resembled it from shops.

Loot Crate replied and full disclosure here, the Supernatural’s car figure is indeed an exclusive, Loot Crate worked with the manufacturer to re-create the original Supernatural’s car which differs because it includes the original car number plate. Whether or not that makes a big deal if you already have one similar to it, is up to you. The car itself is nice; it is well made and seems like good value, it might be worth more value if you don’t take it out of the box. Personally, I don’t have much use for it, but for the avid fan of the show it’s a worthy collectible. 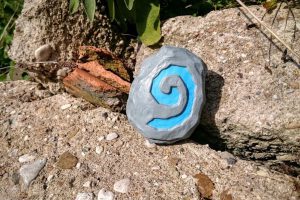 Hearthstone! It is my go to iPad game and I love it. For those who don’t know, it is a digital card game where players battle each other using cards which have different characters on them. It is like Blizzard’s version of Yu-gi-oh with less ‘heart of the cards’ and more ‘pay for the cards’.

The item is a stress ball shaped in the likeness of the Hearthstone, it actually looks surprisingly like a stone with the way it is painted. I’m not sure how many people actually use stress balls, I don’t anyway, they just seem to be things you acquire that are branded by some company for use as promotional items and I suppose that is really what this one is too. Although, it is a cool knick-knack to have around your desk just to mess around with, I found myself throwing it up in the air and catching it a few times while I was waiting around for something. It doesn’t add a lot of value to the crate but I like it anyway. 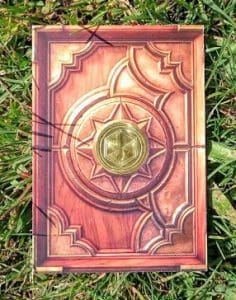 Lastly are the game codes, there is a Hearthstone card which is quite meaty for just an in-game voucher, it redeems a pack of cards for use within the Hearthstone game but it also has a fake coin to do with whatever you want, I’m not sure of the purpose but it’s there.

The other one is an app, or a game I should say that was made by Loot Crate, it’s a short game where the aim is to collect gems to build your monster party. There is the possibility it could be expanded upon in the future but we will see.

This month’s Loot Crate was somewhat weaker than the last few I think. I like The Simpsons, Hearthstone, Supernatural’s and Pokémon and even then the items felt a bit weak in places. Yes they are worth the money overall but I wasn’t really interested in anything other than the Kidrobot figure and the Hearthstone stress ball, if I looked at it in terms of just those two items it wouldn’t be worth the money unless the exclusivity of the Kidrobot figure was took into account and then maybe I could justify it.

Definitely good to see the continuation of the figures, for me that would be a primary reason to stay subscribed.

Loot Crate is the monthly gear and swag club for those that live and embrace the geek and gaming lifestyle.

3 month plan: $28 USD per month, including shipping and handling

6 month plan: $27 USD per month, including shipping and handling

EXCLUSIVE DEAL: Get 10% off any new subscription with code ALLBOXES at checkout on the LootCrate website.