Reviewed by Mary on 7th December 2017 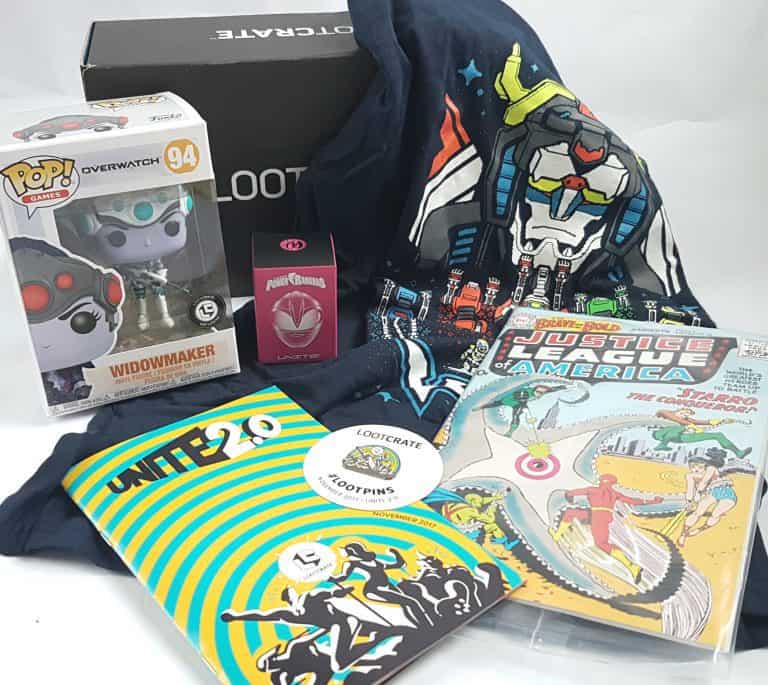 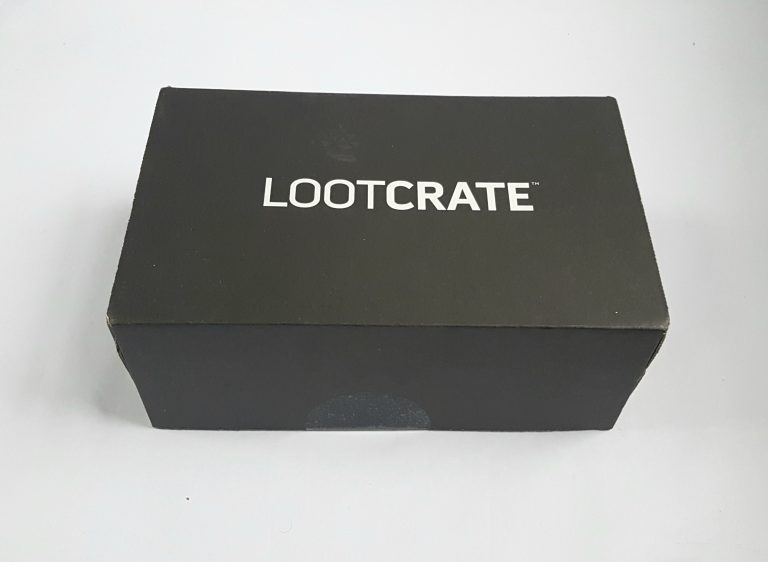 This month’s theme is UNITE. 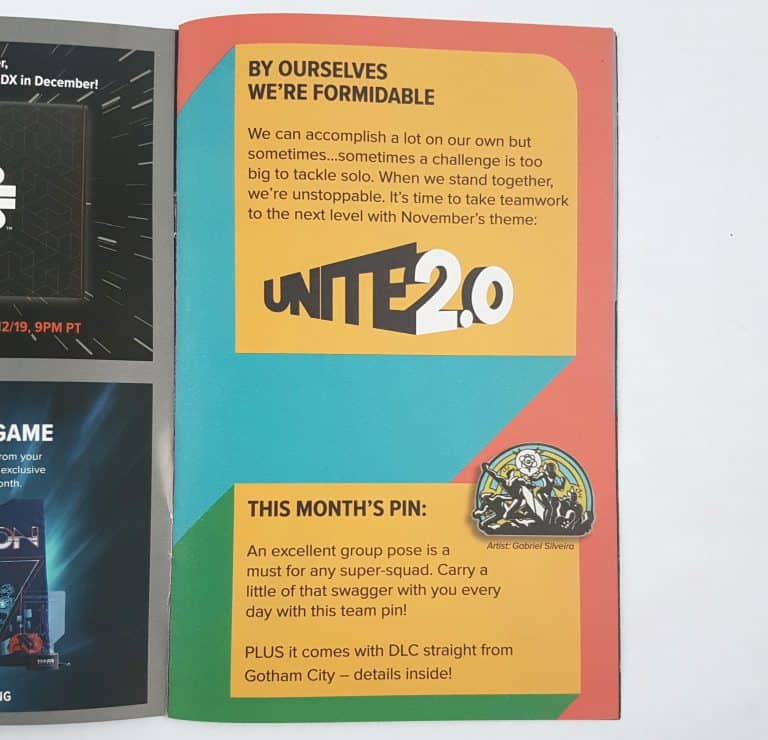 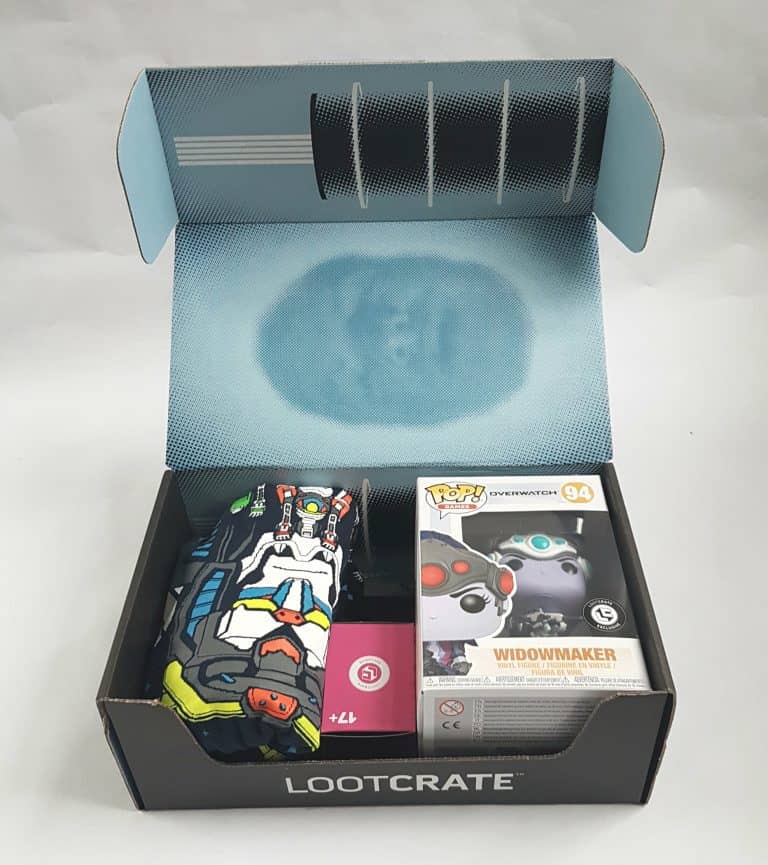 A POP! on top, and that t-shirt looks bright! 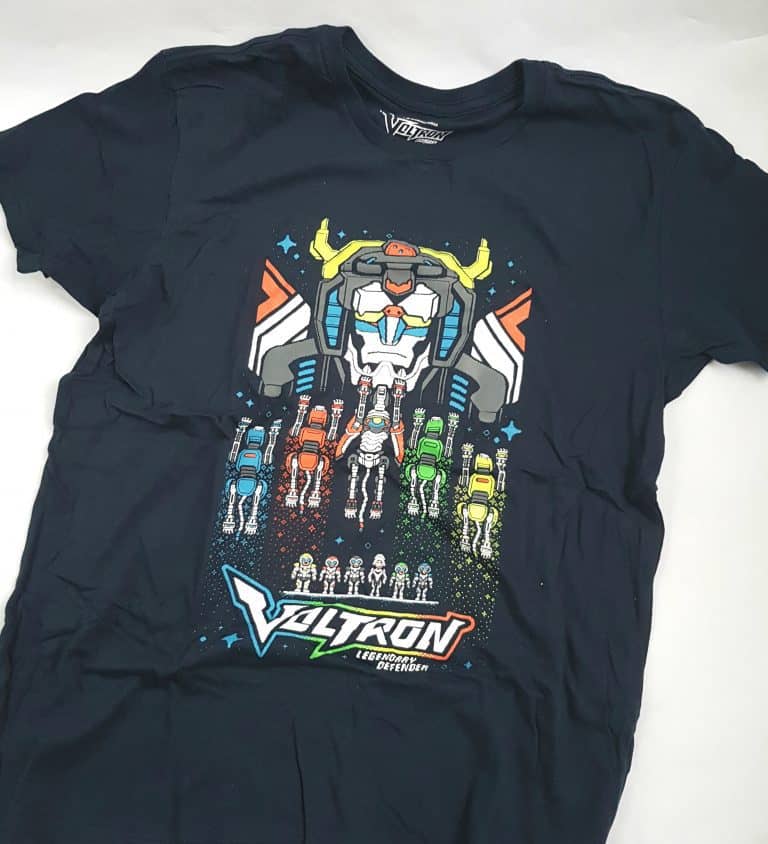 This shirt shows Voltron from the TV show Legendary Defender, in a bright 8-bit style design. 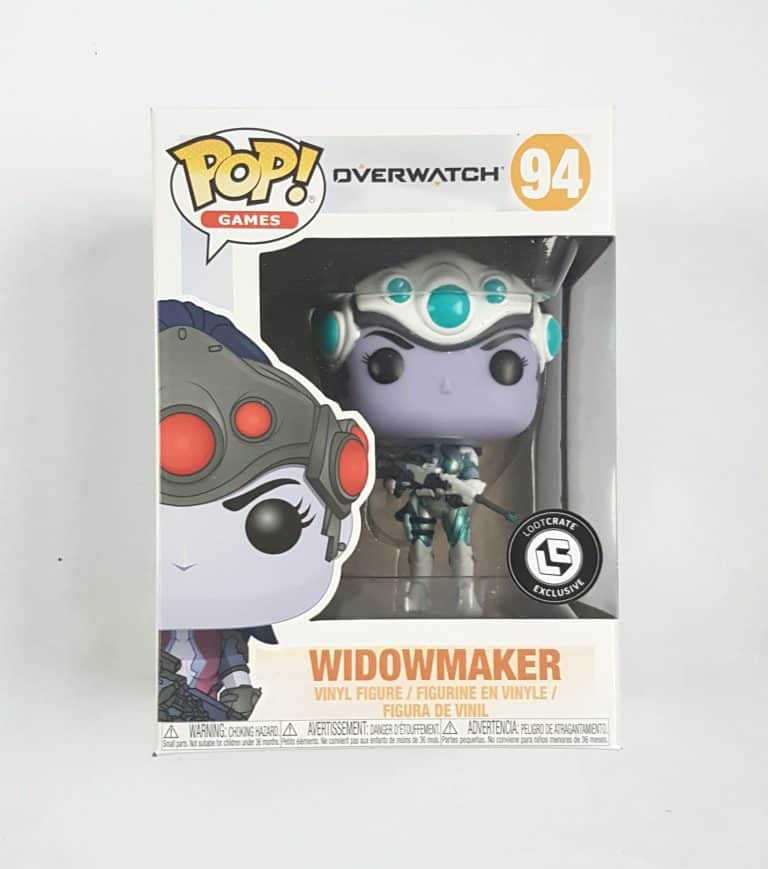 This POP! figure is a LootCrate Exclusive. It’s Widowmaker from Overwatch. The problem with this was that the legs were different lengths, so it wouldn’t actually stand up. This is why it’s pictured still in the box. 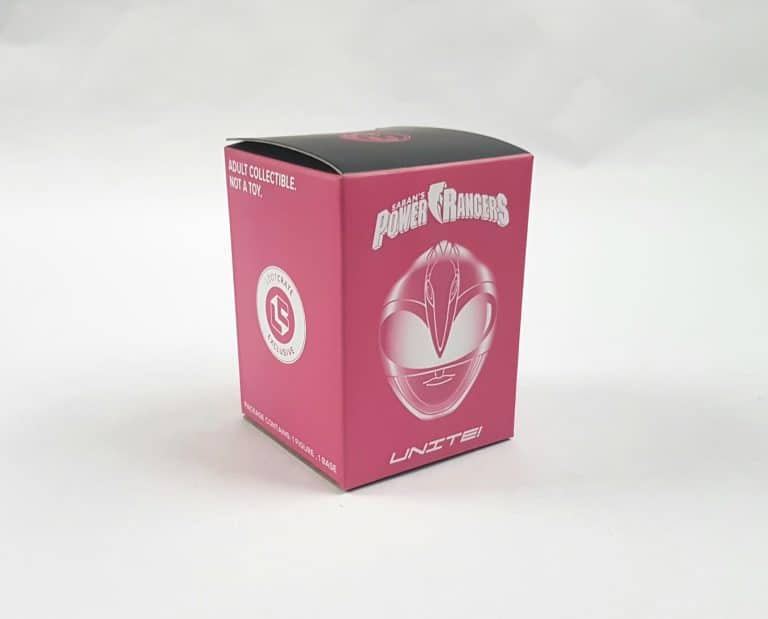 Again, another Lootcrate Exclusive figure. This time it’s a mini figurine of one of the Power Rangers. 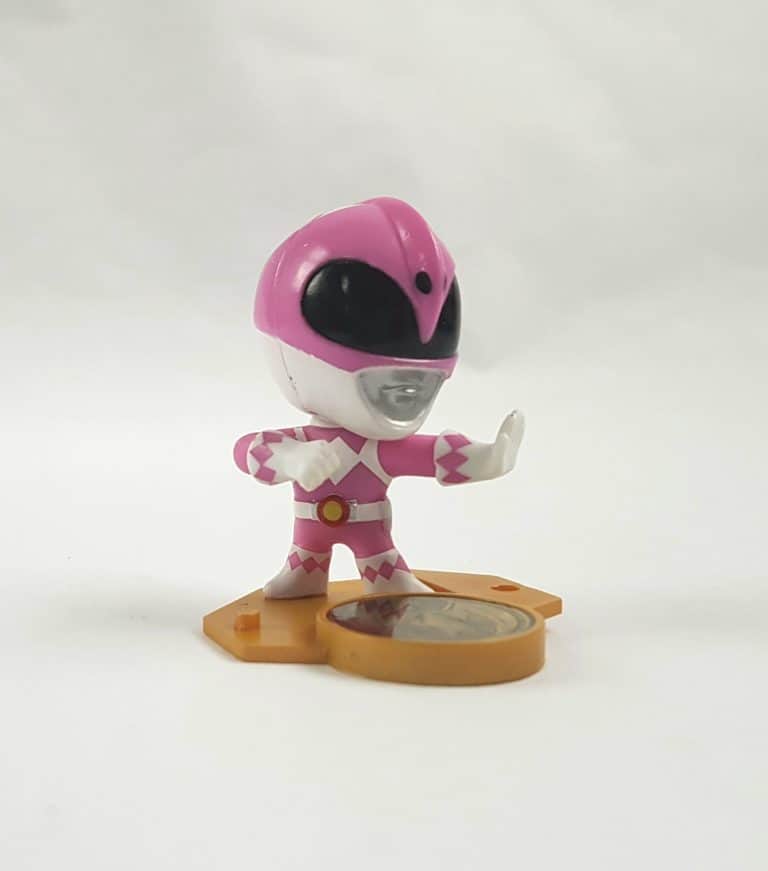 The Pink Power Ranger. The oversized head makes it look a little like a POP! This was one of five possible figures. If you want to collect them all the others will be available to buy from the Loot Crate site at some point. 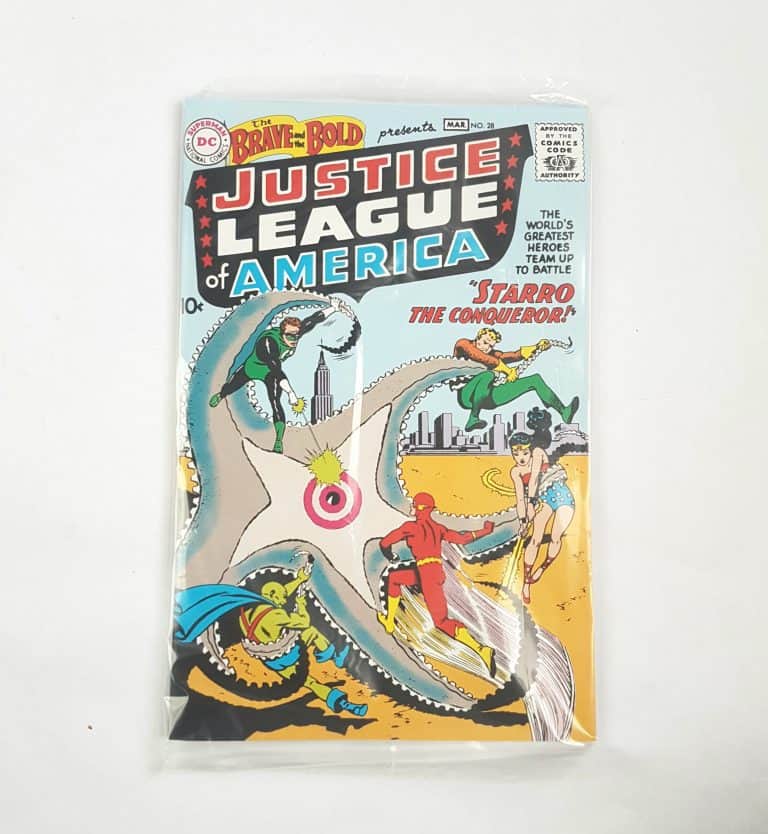 This comic book is a reproduction of the first appearance of the Justice League in 1960. 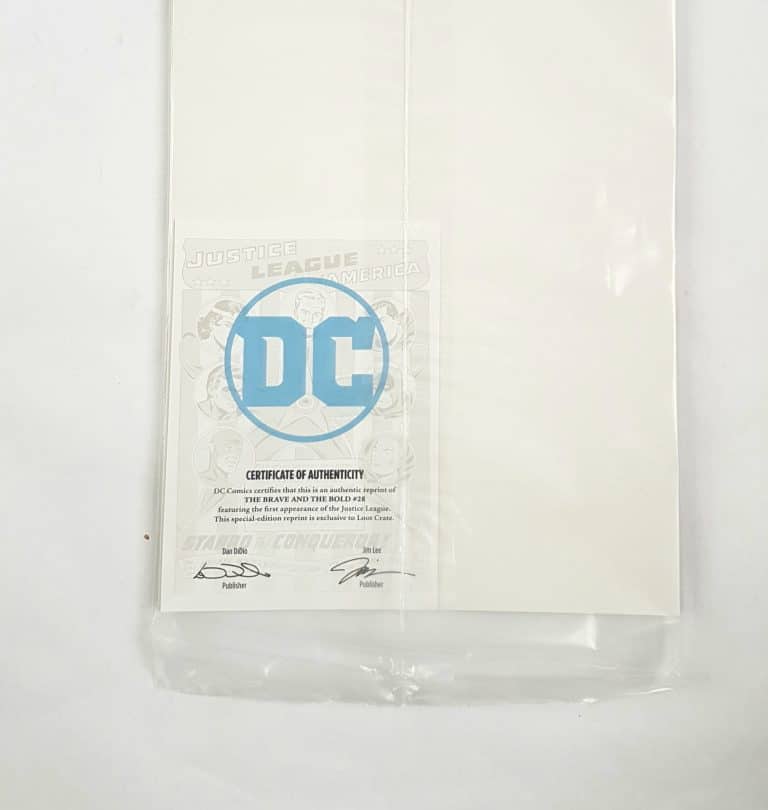 It’s printed on paper that mimics the original, and comes complete with a certificate of authenticity. 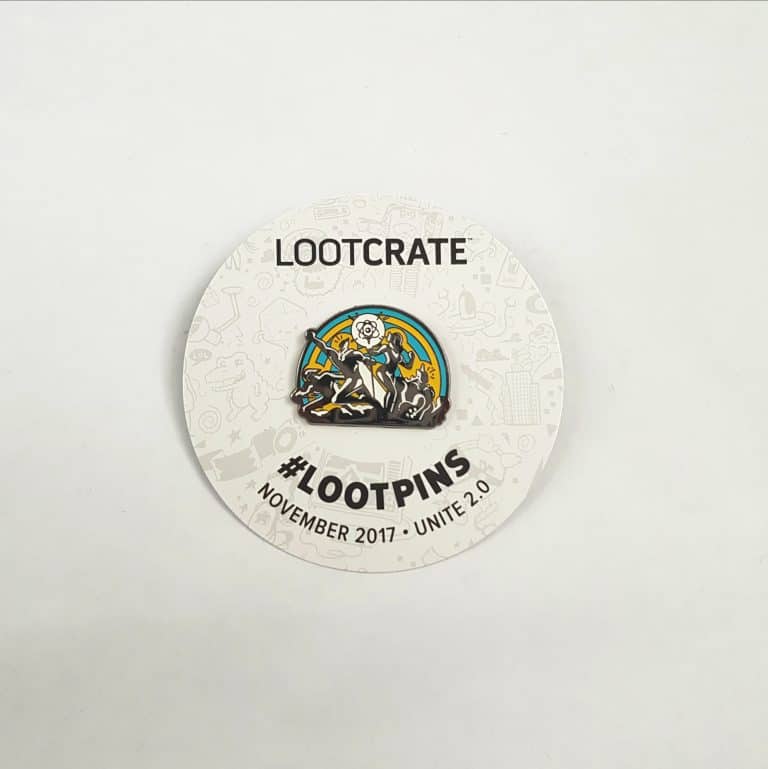 This month’s Loot Pin. I like the retro look, and the flag has what looks like the Atom symbol, though I can’t quite tell if the figures are specific characters or just generic superhero types. 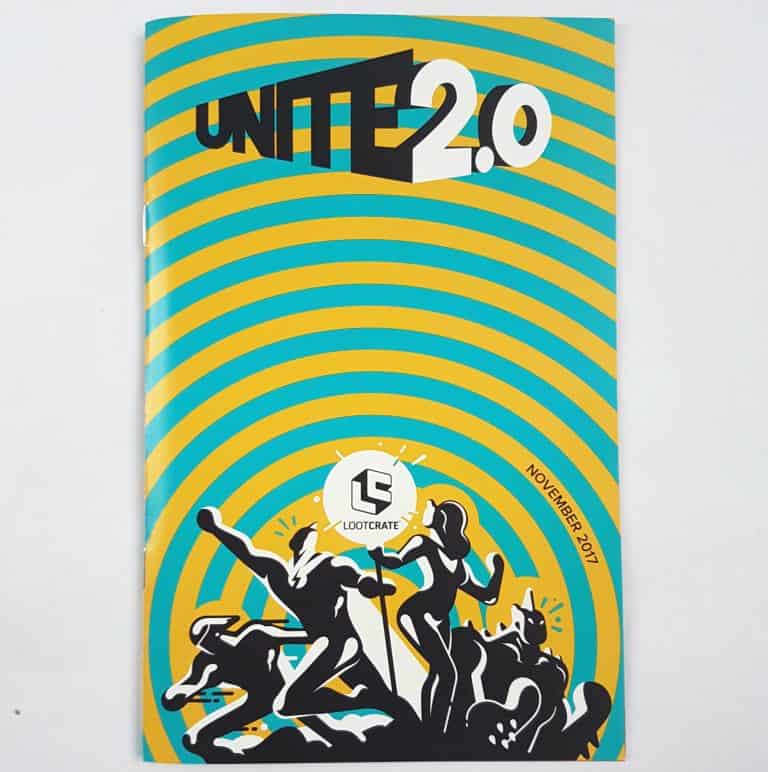 Same design as on the pin. I can sort of see the Flash symbol on the guy to the left of the flag, but again, con’t tell if it’s a generic as the Flash doesn’t wear a cape. Anyway, I really like the look of this. 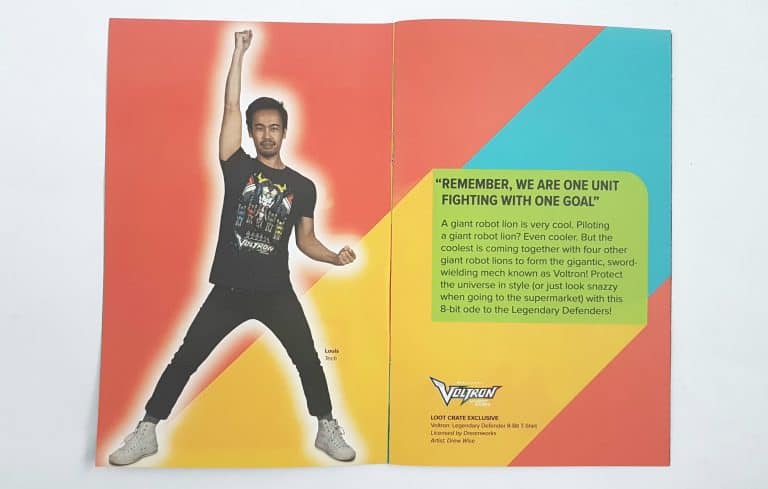 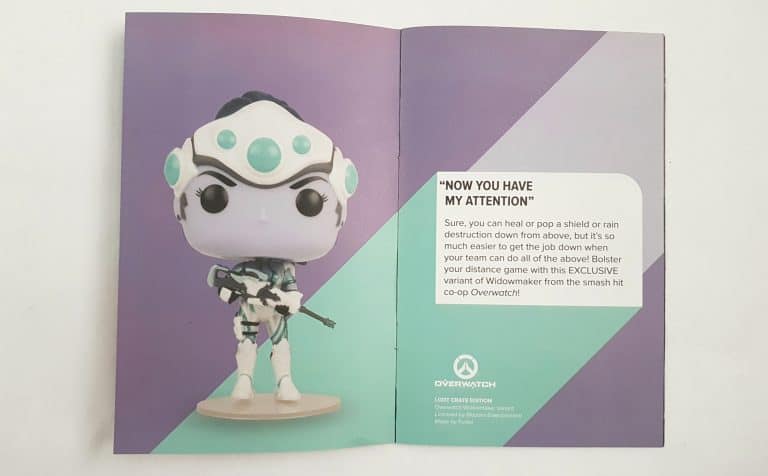 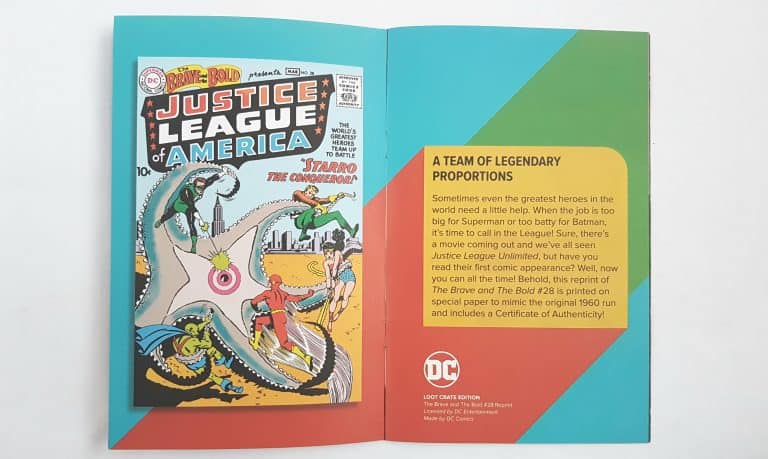 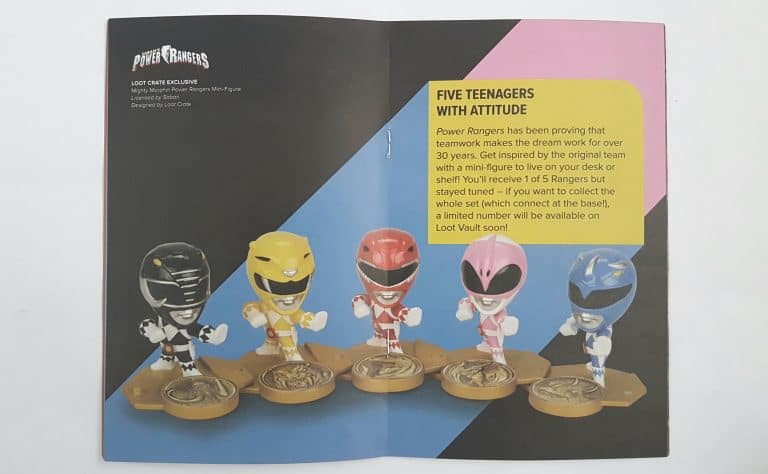 POP! Figure: these usually retail at £10.

Comic book: This is difficult to figure out, so maybe £5 tops.

The t-shirt is fun, but I don’t know this TV show and it’s not something that really appeals to me. It’s a good design though, the retro 8-bit look is great.

Even though it’s an exclusive, I’m not a fan of POP! figures. This is an exclusive, but it’s only the colours that are different. In size and shape it’s identical to the normal Widowmaker figure. The regular Widowmaker POP has a purple outfit and red on the helmet, which is what the character actually looks like in the game. This version doesn’t actually look like the character in terms of colourscheme. I also don’t think the quality is good. Like I said, one leg is shorter than the other so it doesn’t actually stand up.

The Power Rangers figure is OK, but the paint quality isn’t particularly good. It doesn’t say who manufactured it either. Again, I’m not interested in this franchise at all, but I’m sure lots of people will be thrilled with this.

The comic is a quite fun for a comic/Justice League fan. Reproductions are always fun for collectors, especially as the real thing tends to be a bit pricey!

I like the aesthetic of the pin, the bright colours and retro look is great fun!

Overall, this is not my favourite box. I’m not a fan of any of these franchises, so I feel a bit underwhelmed. I also am not impressed by the poor quality of the POP and the smaller figurine, and in any case, I don’t like getting more than one figure in a box.

Oh, and while Lootcrate always arrives near the end of the month, this arrived on December 6th. Pretty late.

Lootcrate did their first ‘UNITE’ box way back in 2015. It figured some cool stuff from Marvel/Avengers and Rick and Morty, among others. This 2.0 version seems to me to be way behind in terms of both the included franchises and the items themselves.

In previous Lootcrates there have always been at least one or two things that I’ve got really excited about, and feels premium. I realise this is the basic Lootcrate, and technically the value is fine, but with the exception of the pin, there’s nothing here I find appealing.