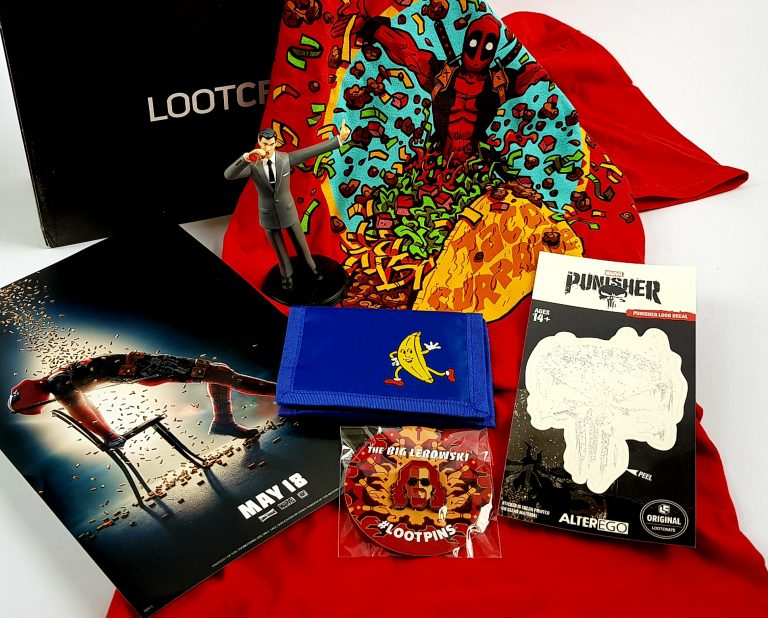 Loot Crate is a monthly box full of geeky awesomeness. As well as their classic original Loot Crate they have several other box types, including a box for your pets, gaming, and wearables!
I’m reviewing their original box, the LootCrate, which contains 4 – 5 items each month, including exclusive and licensed items, with a value of at least $45.They have four subscription levels: 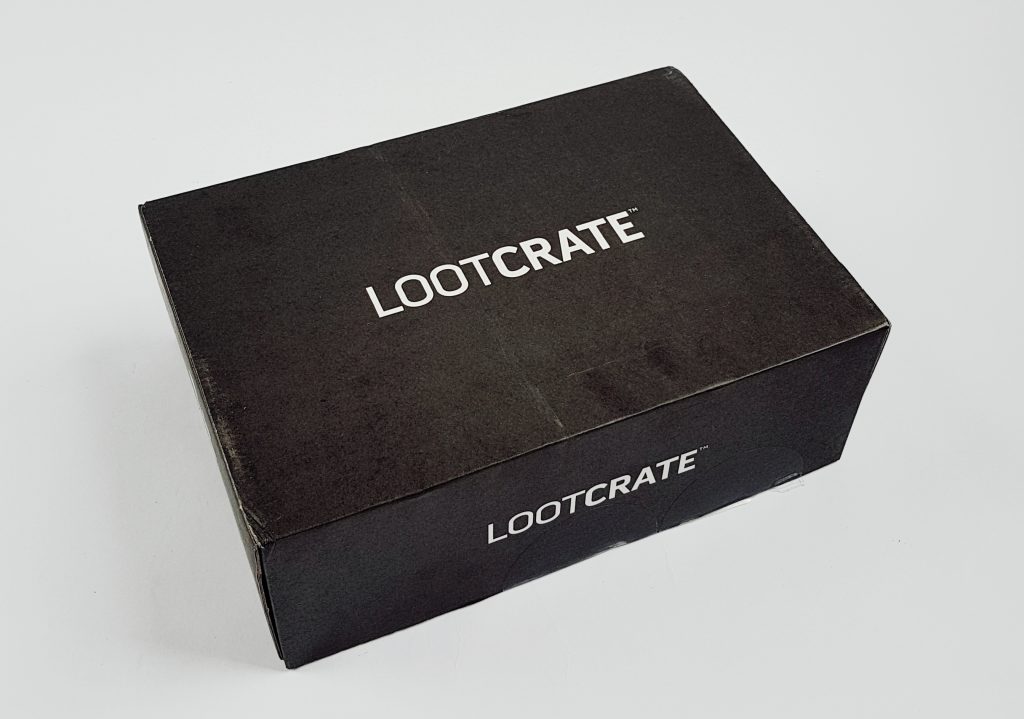 The May theme is Role Models? 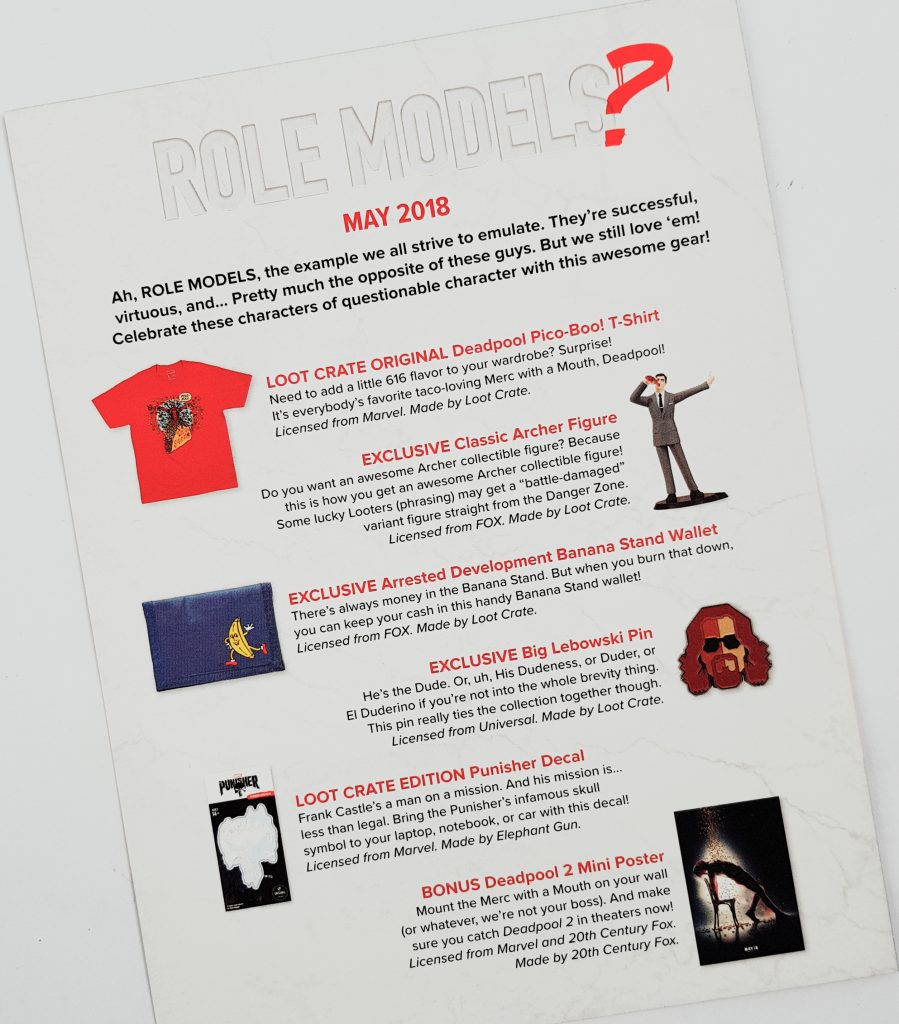 The question mark indicates that you might not want to use the characters featured as actual role models. 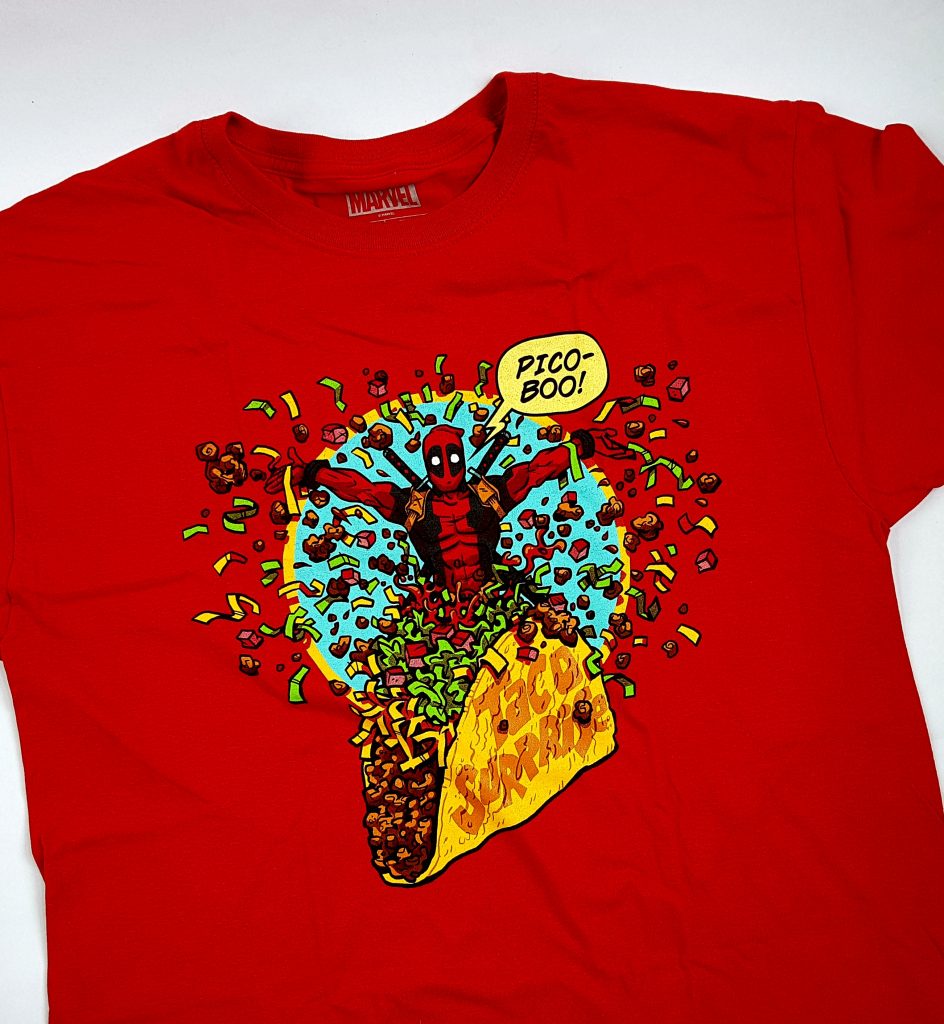 This month’s t-shirt, featuring Deadpool exploding out of a taco! As I’m sure you know, Deadpool loves Mexican food. This is a pretty cool design, plus it’s 100% cotton. 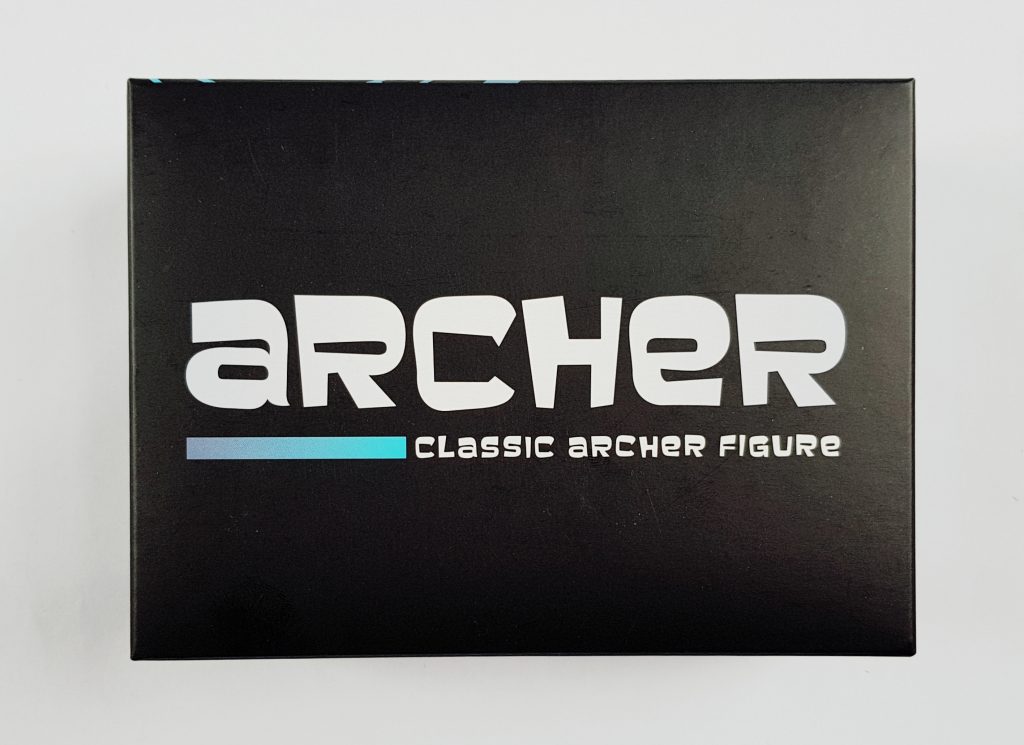 This is a Lootcrate exclusive Classic Archer Figure. 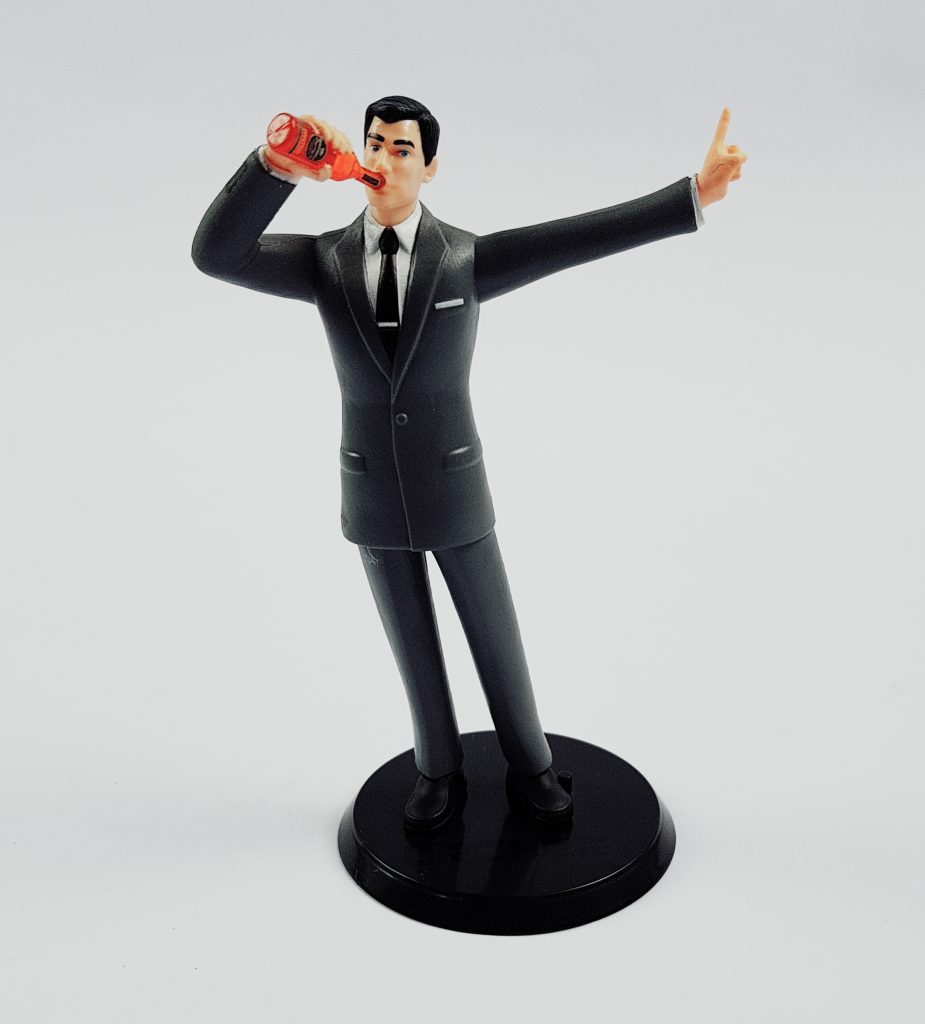 I actually had no idea who Archer was. Turns out he’s the titular character in an adult animated series. I had to look it up, and it turns out it’s on Netflix so I’ll take a look.

The figure itself isn’t great quality. The finish is rough in places and looks damaged, and the paint isn’t in line with the moulding in places. Also… 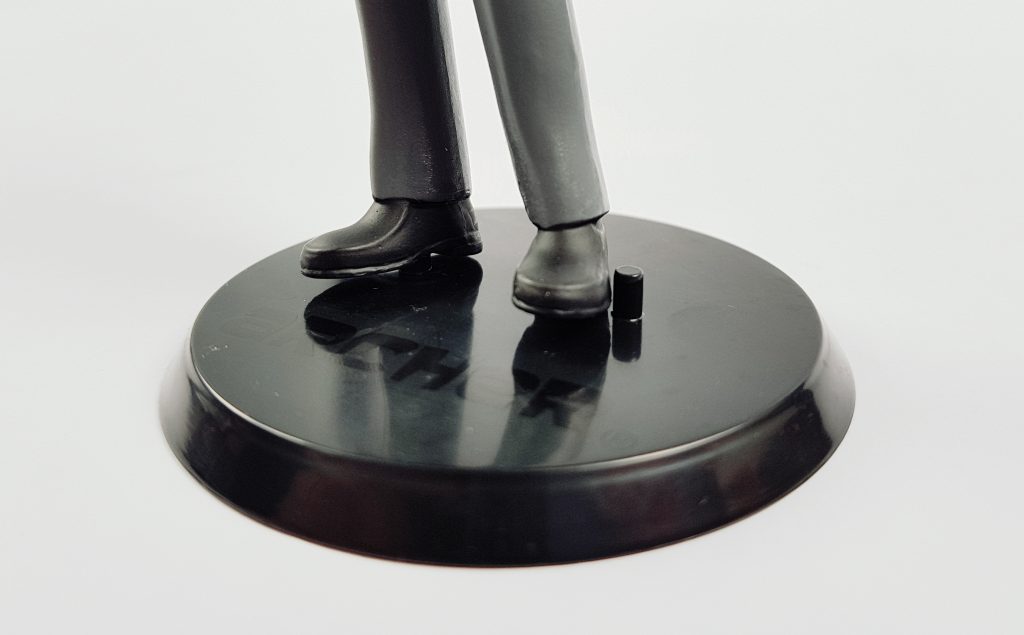 There are holes in each foot for the stand to fit in. Only problem is, the stand doesn’t line up with the feet. 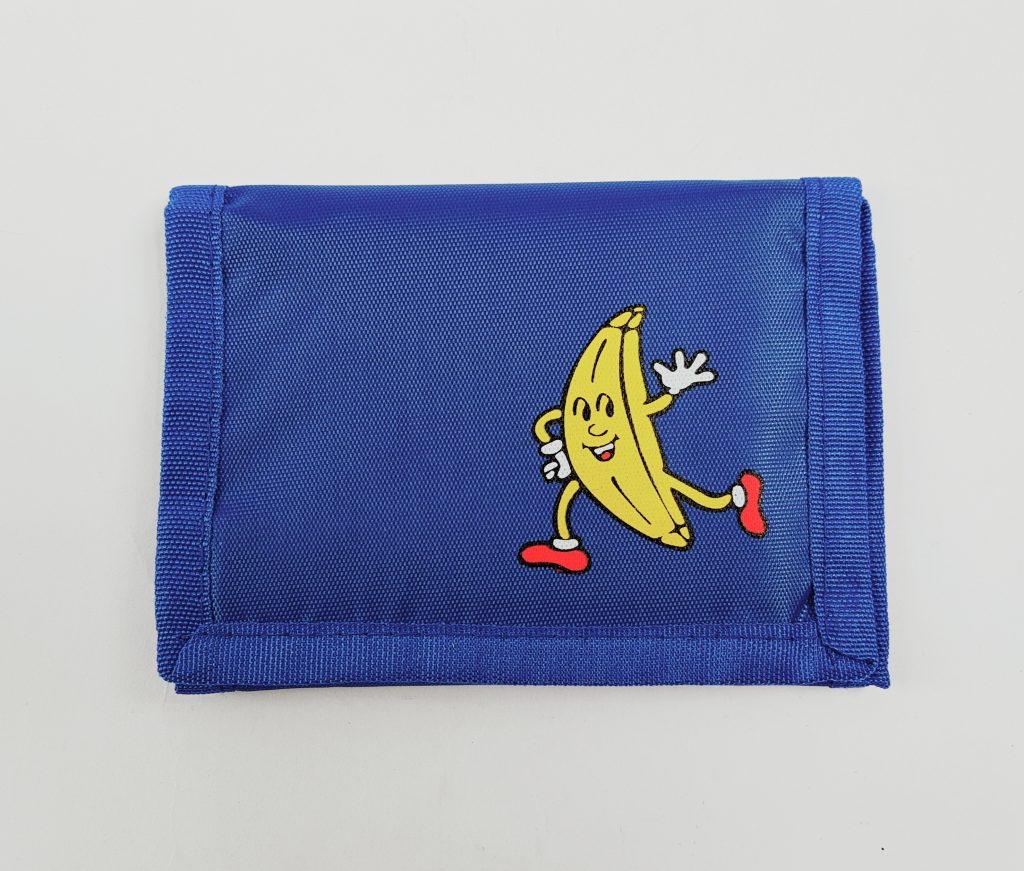 This is another exclusive item, an Arrested Development Banana Stand Wallet. 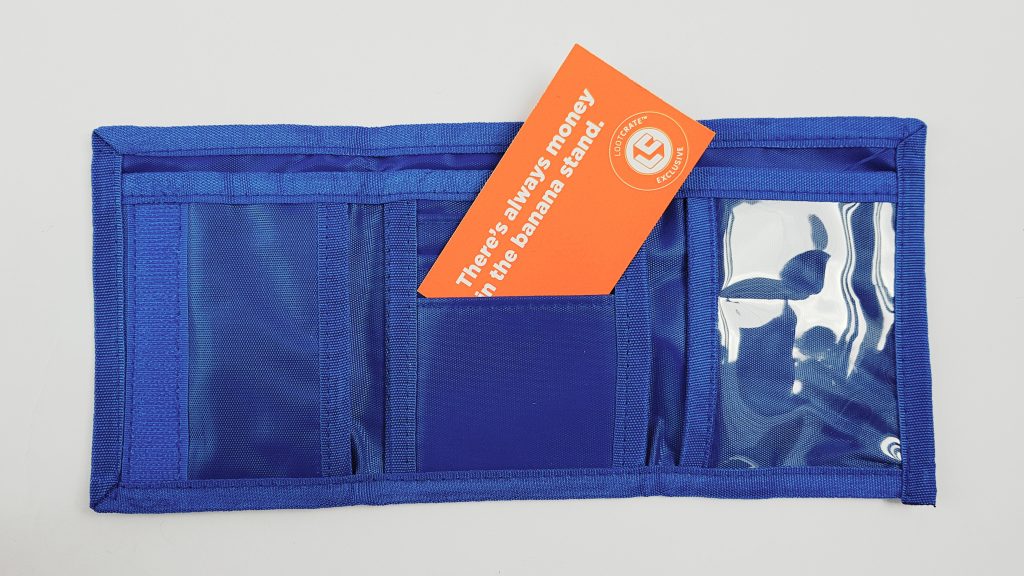 The card is in reference to a long-running joke in the TV series. 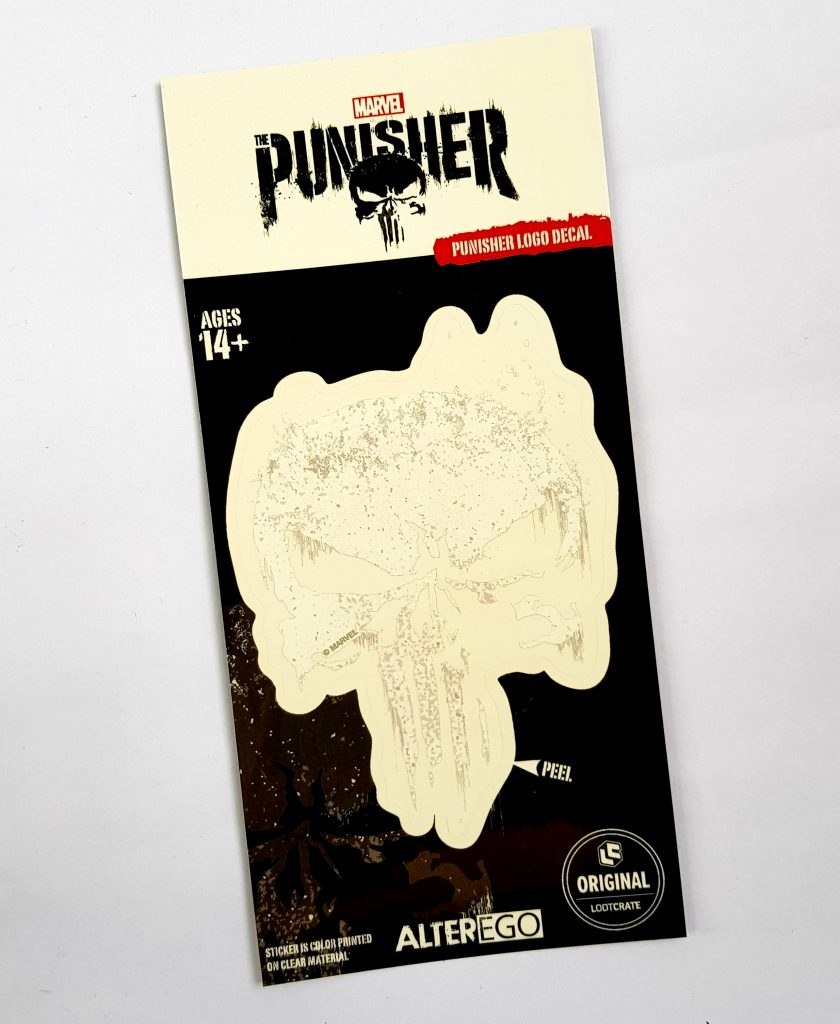 This is a Punisher Decal. It’s colour on clear, and can be stuck to laptops, cars etc. 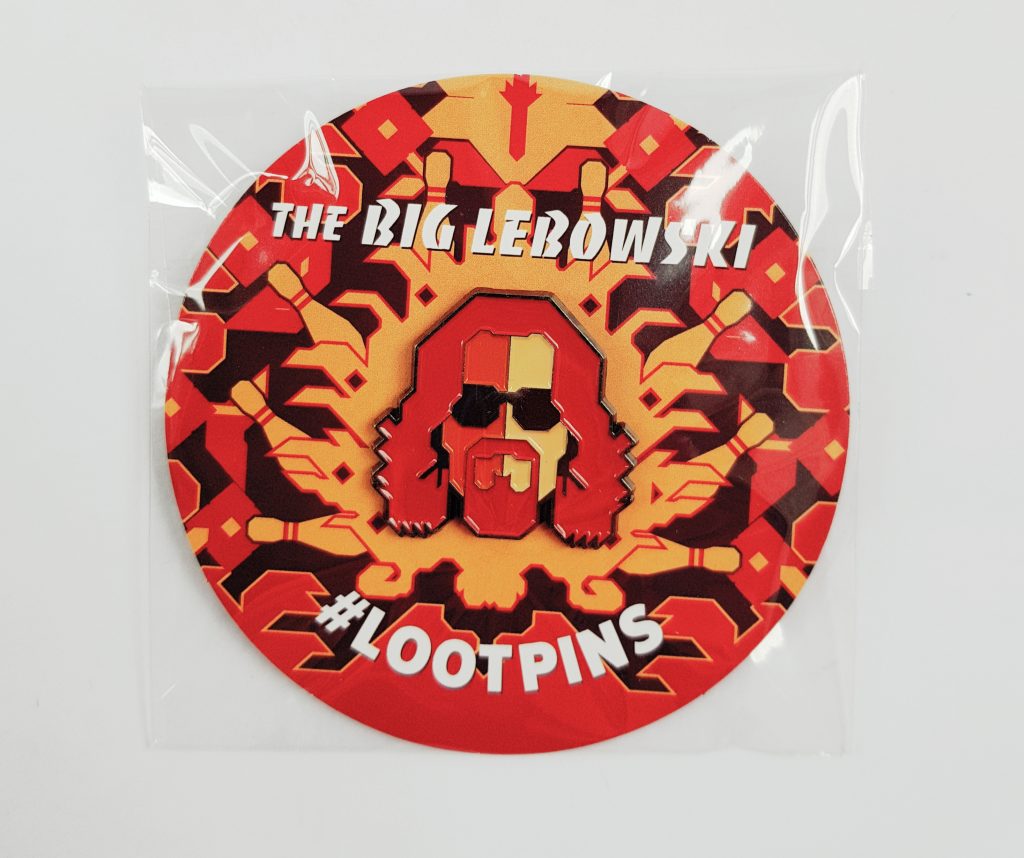 This month’s Loot Pin features the Dude from the Big Lebowski. 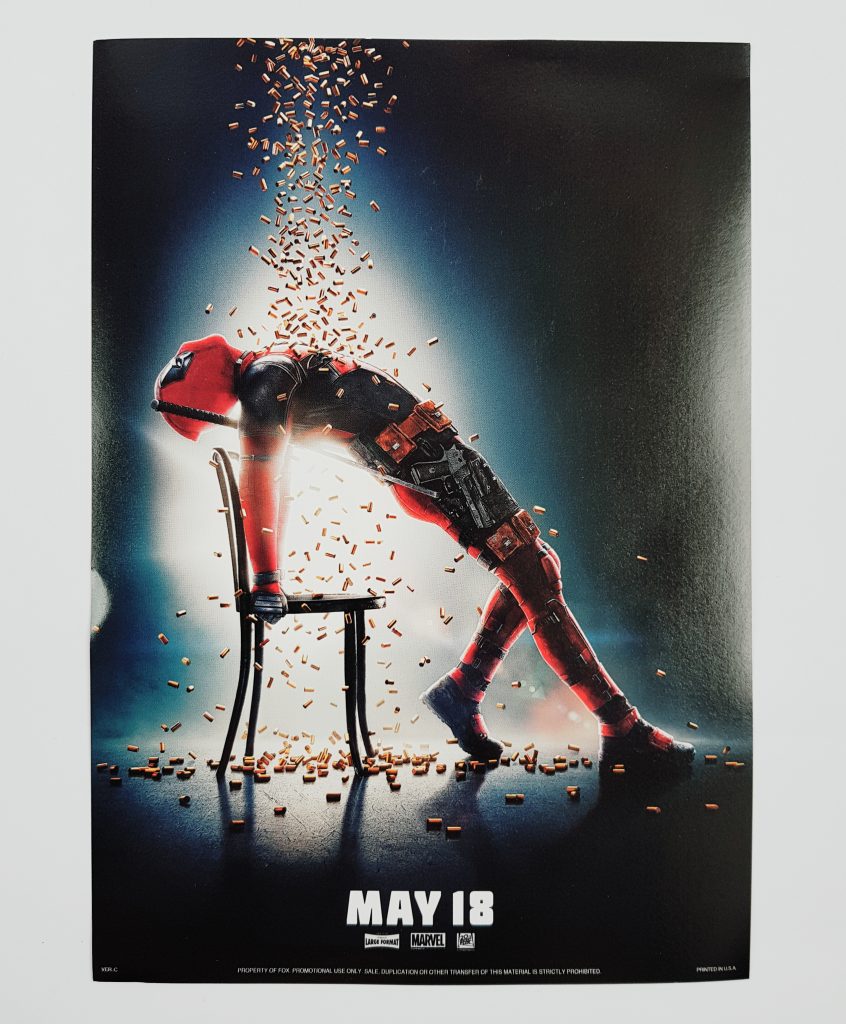 This is the ‘bonus item’, a Deadpool 2 Mini Poster. I’m going to say right now that this is not a poster, it’s a flimsy A5 promotional flyer of the type you would pick up in the cinema.

LootCrate claims that each box contains at least $45 (about £35) worth of goodies.  Almost every item is a LootCrate exclusive, so it’s difficult to assign a commercial value. However I can sort of find equivalents and guesstimate, though I don’t use eBay as I find their prices are not a useful guide to value. I’ll also add my thoughts as I go along.

T-shirt – geeky t-shirts are usually around £10. I love anything Deadpool-related, and this is a great design. It’s also 100% cotton.

Archer figure – an exclusive item. The quality is really rather shoddy, but I’ll put it at £10 as I recognize that fans of the show would probably like it.

Wallet – Again, this is not very good quality, and it’s also the kind of wallet that kids use, not adults. It might be a fun novelty for fans of the show, but that’s all it is. I’m going to say £5.

Decal – this isn’t exclusive, and there are a ton of Punisher decals out there for less than £2.

OK, so it’s over the actual price of the box (£24 per month) but still under the supposed value.

The t-shirt is great, cool design and awesome franchise. Plus Deadpool 2 came out this month! I also like the pin, it captures the vibe of the Dude very well.

As for the rest, I’m not impressed. I don’t watch Archer or Arrested Development, but the thing I really don’t like is the poor quality of the items. I’m very happy to have cool stuff even if it’s from franchises I don’t know, but I want it to be good quality. Neither of these things are.

The figure isn’t well made, and I suspect that’s because it’s actually made by Loot Crate rather than from another company with the Loot Crate branding. It’s ridiculous that the feet don’t fit the stand properly, unless it’s supposed to be some super-ironic joke. Perhaps the implication is that the people who made it were so drunk, like Archer, that they couldn’t make it properly.

The wallet is feels cheaply and made (again, it’s made by Loot Crate).  That being said, a teenager will probably love it.

The decal is OK, but it’s filler. As for the poster, it’s no such thing. It’s promo material, so  it’s ridiculous to call it a bonus item.

Oh, and this is the May box. It arrived on June 7th. I thought last month LootCrate were upping their delivery game, but it seems they’re back to the usual late delivery.

All the items fit in well with the theme, there's a great t-shirt and pin, but they need to be lighter on the filler and heavier on the quality control.