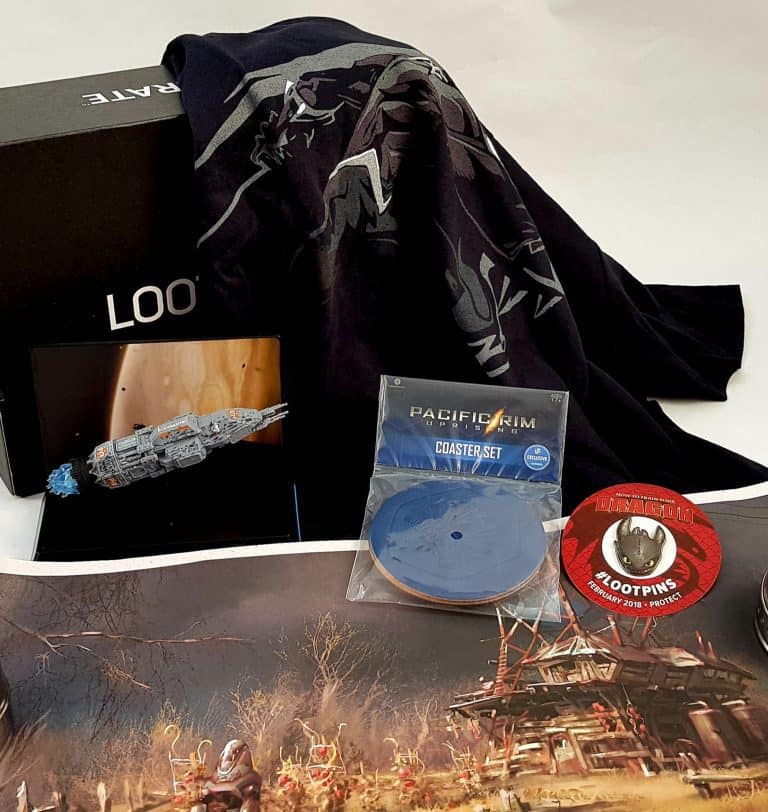 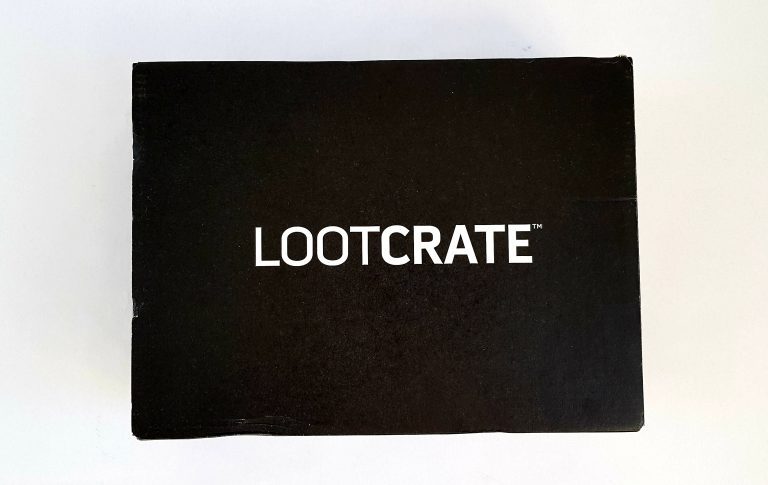 This month’s theme is PROTECT. 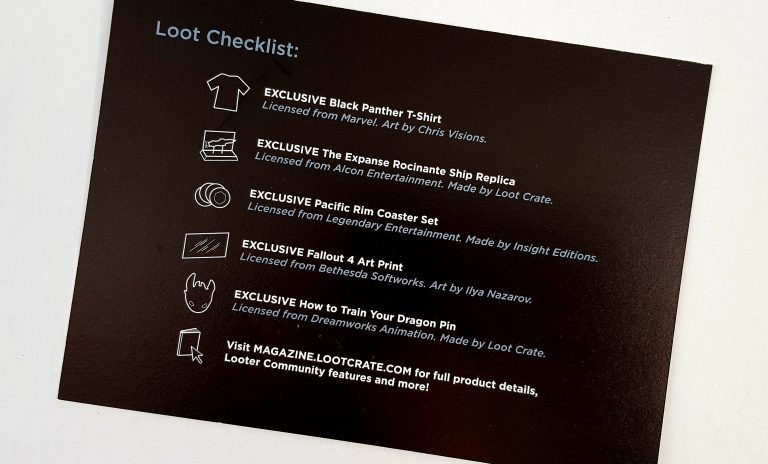 LootCrate no longer has a menu booklet, just a flyer with a contents list. The full booklet with item descriptions is now online. 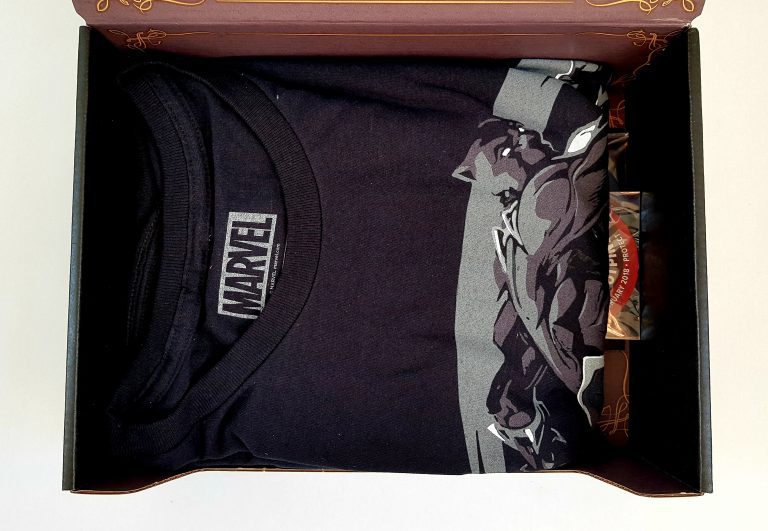 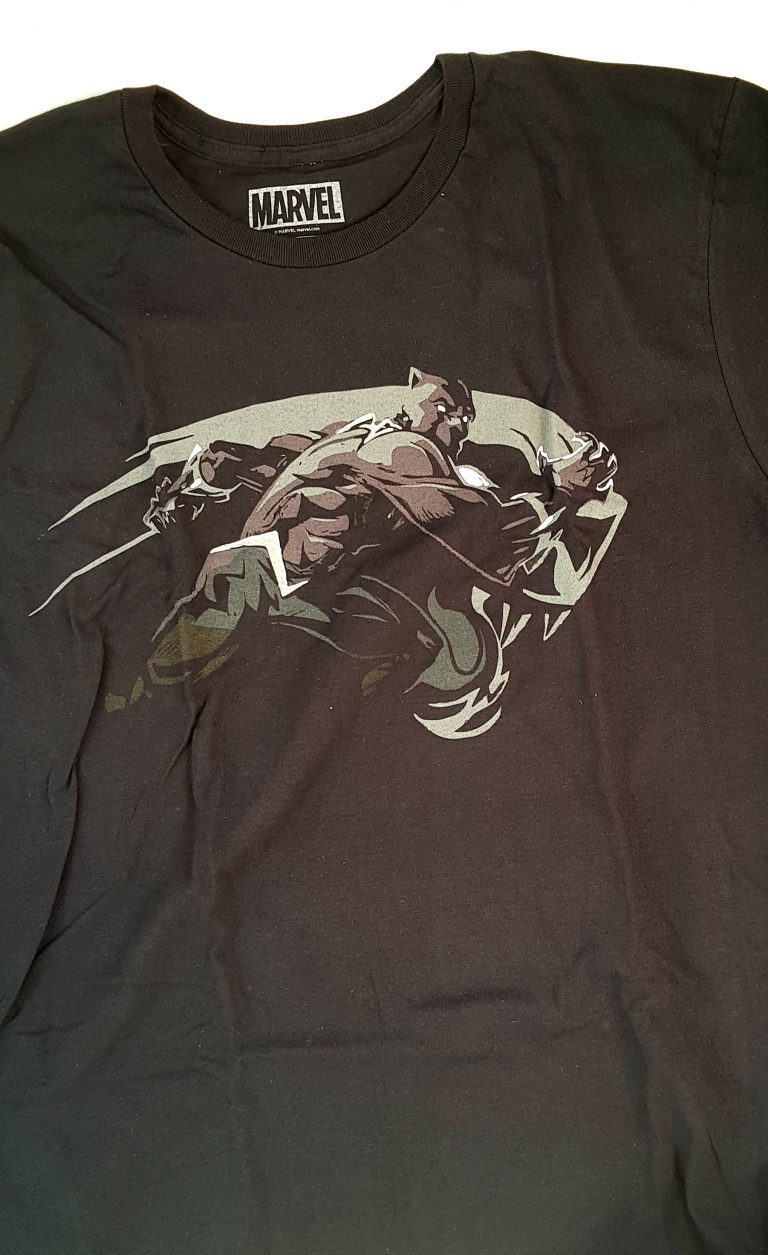 This month’s t-shirt is this fantastic Black Panther t-shirt. The design is a Loot Crate exclusive, and has been created but Chris Visions, a Marvel cover artist. 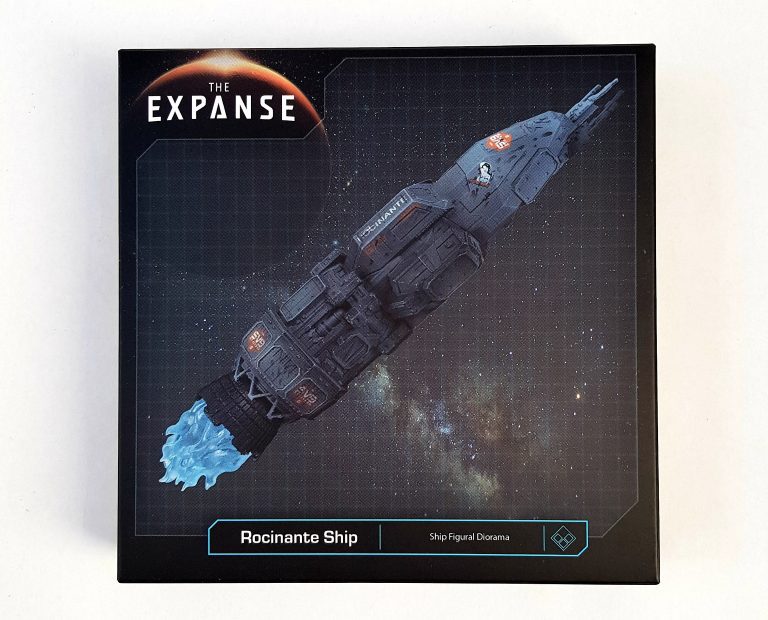 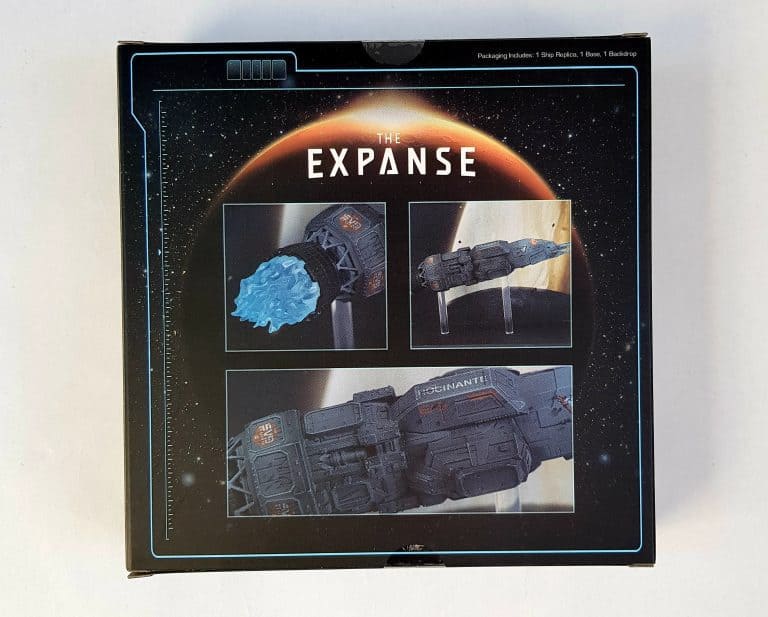 This is a model of the Rocinante ship from the TV series The Expanse. 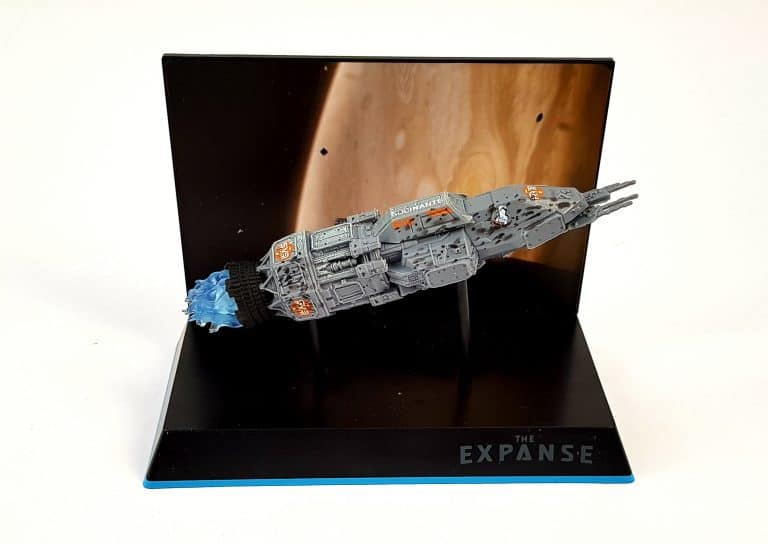 It’s nicely detailed and has a two part stand to hold it against the background. The picture on the box is slightly different to the actual model, as the picture shows the posts as transparent rather than the black of the model itself. 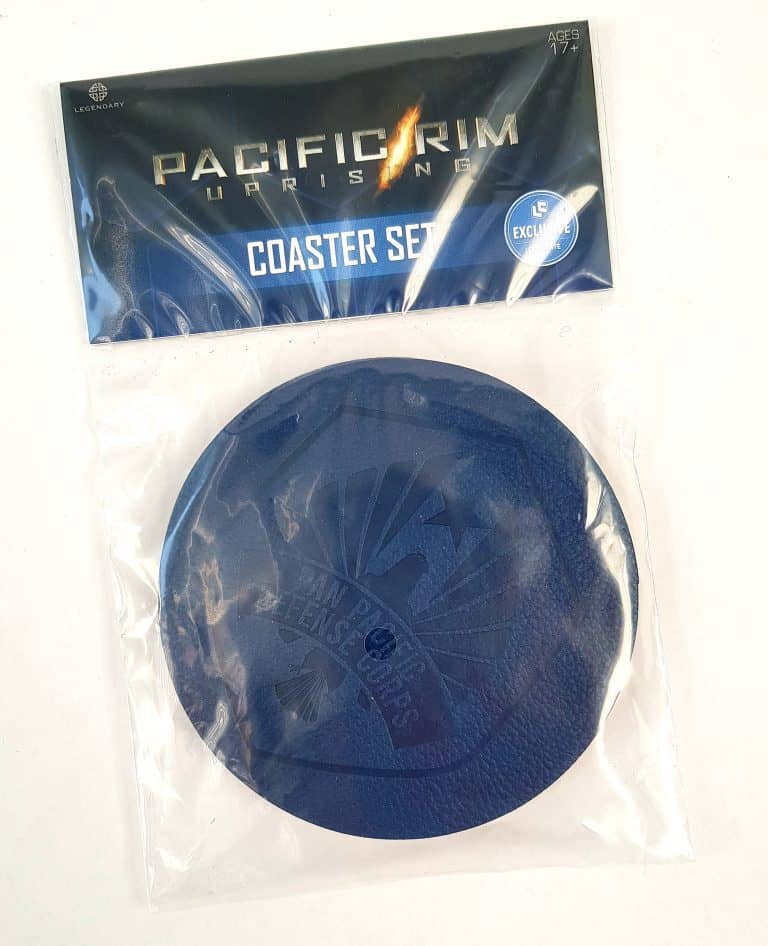 This is a set of four Pacific Rim: Uprising coasters. They are made from faux leather and cork, and feature the logo of the Pan Pacific Defense Corps. 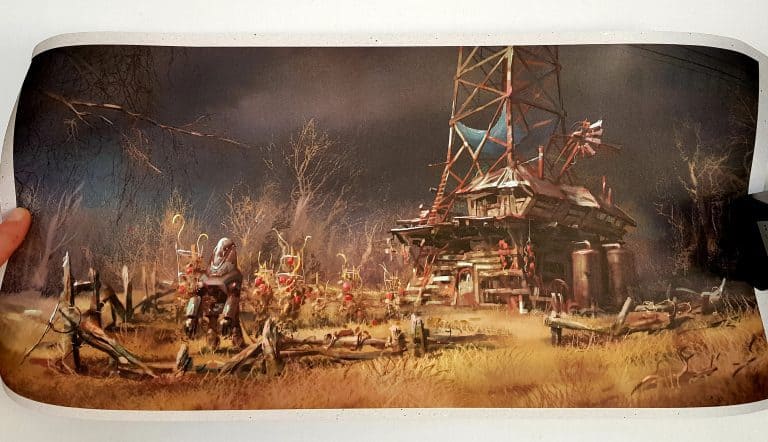 This is a Fallout 4 Concept Art Print by Ilya Nazarov. It shows Protrectron security robot guarding a Windmill Power Station.

On the other side is a promotion for the Loot Crate Fallout crate. 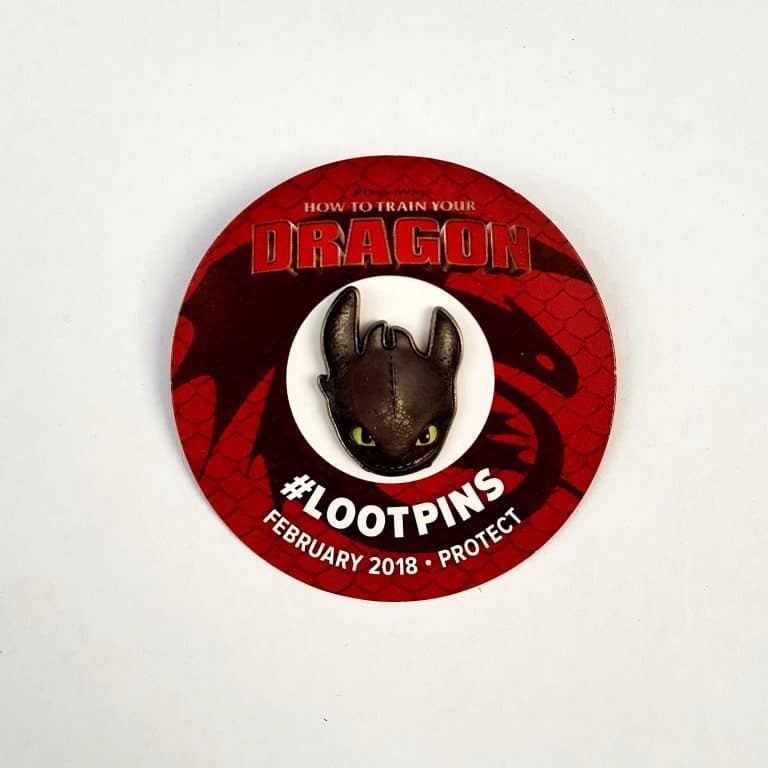 Expanse model – this is very difficult to judge as there is currently no official merchandise for The Expanse. Given the size of this model, I’m going to put this at £15.

Art Print –  this picture is online on ArtStation. The print itself is more like a thin poster, so £5.

The t-shirt is terrific, and perfect timing with the recent release of the Black Panther movie!

I’ve never heard of The Expanse, but for fans of the show the ship model would be very cool. As I said, there’s not yet any official merchandise for this show, and its second season only premiered a year ago. In the UK it airs on Netflix. The model itself is pretty nice, the detailing is good and the background diorama structure looks good.

The coasters are OK, but they’re thin and very flimsy, the quality isn’t great. They definitely look like a novelty rather than something practical.

The art print has reasonable print quality, but the paper itself is barely thicker than regular printer paper, and one corner of mine was damaged. There have been better quality prints in other Loot Crates. I’d definitely call this a poster rather than a print.

The pin is cute, though the franchise is much more for children.

I really miss their proper menu booklet. Looking at it online is very unsatisfying, so I hope they will bring it back at some point.

Overall, this is another mixed bag.  The t-shirt is bang up to date, and subscribers who haven’t already seen the movie should be able to wear it when they do! Quality of the model is great, which sort of makes up for the coasters and ‘print’, both of which feel rather filler-y.

Lootcrate takes a bit of a random approach to franchises within themes, so if you're a fan of whatever ones happen to appear in their box you'll be happy!