Reviewed by Mary on 3rd November 2016 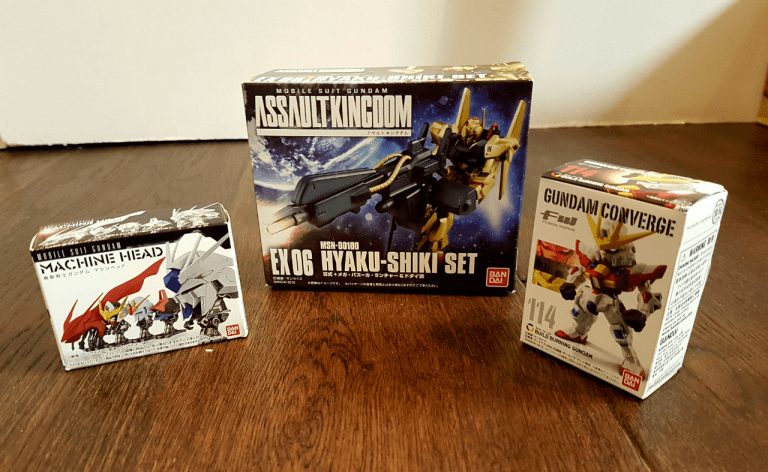 First of all, this review is late, the pictures are not great, and both these things are totally my fault. OK, there is a small amount of blame apportioned to the cyber-ether that swallowed my original pictures. And I wrote a (naturally) brilliant review and didn’t actually upload it. Plus then I couldn’t find the damn box itself. Mea culpa. Those of you who have been breathlessly awaiting this Lootaku box review, my deepest apologies.

That’s enough grovelling, let’s get on.

So, the first Robomania box was back in April, and this one is very similar. A POP!, bobblehead, and three smaller figures from the Gundam anime series.

(Sorry, no actual unboxing pictures, but the boxes always look the same. The boxes are cool, they look like a cartoon treasure chest. If you’re desperate to take a look at one, check out previous reviews.) 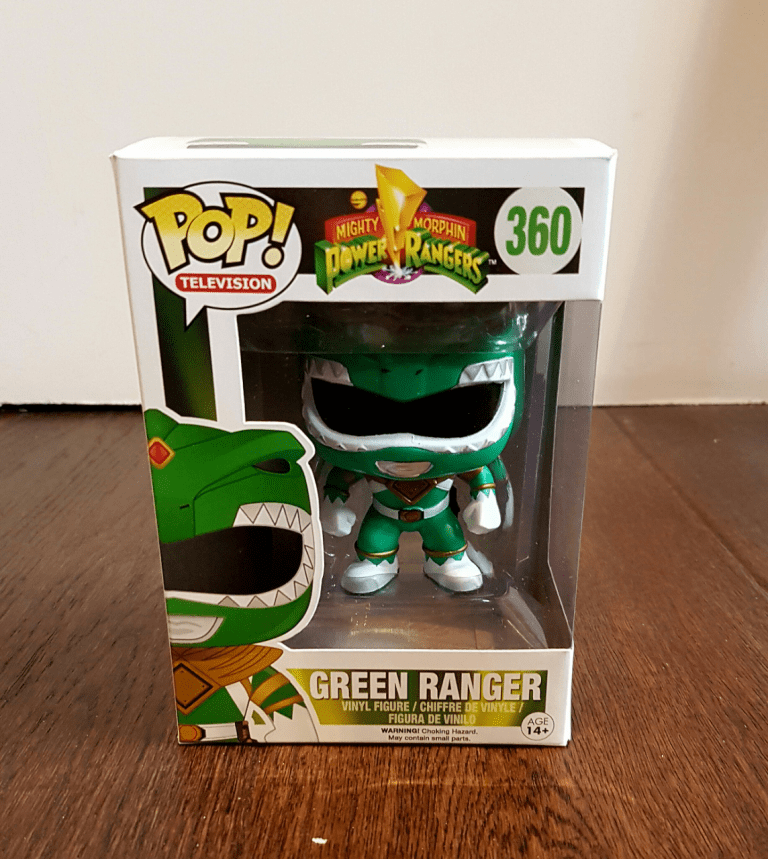 A Power Rangers POP! You got one of four colours, and as you see I got the green one, Tommy Oliver. He’s pretty nice. 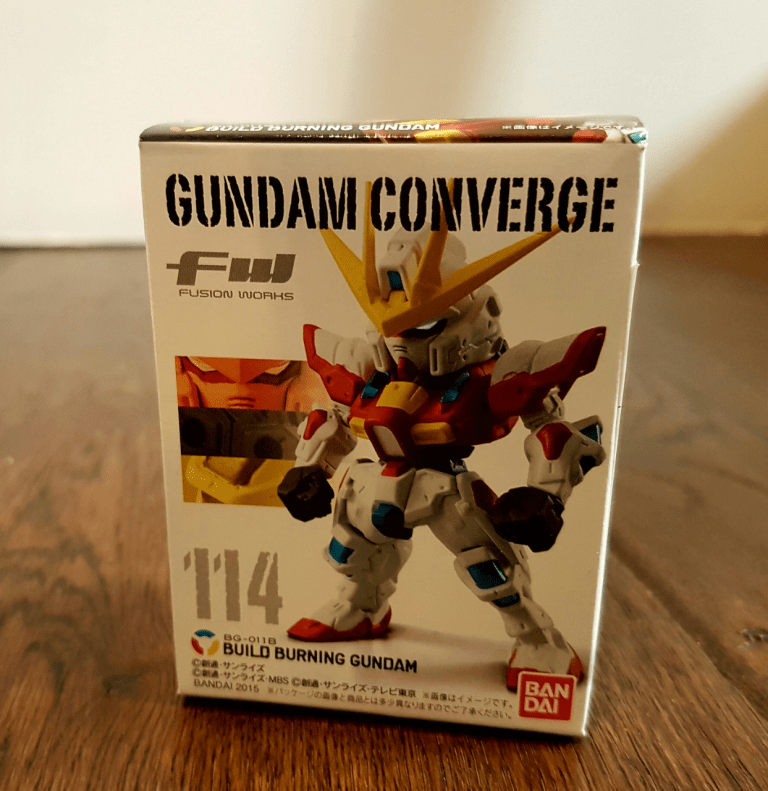 A cool Gundam Convergue figure. These are small figures, that come in pieces and snap together. 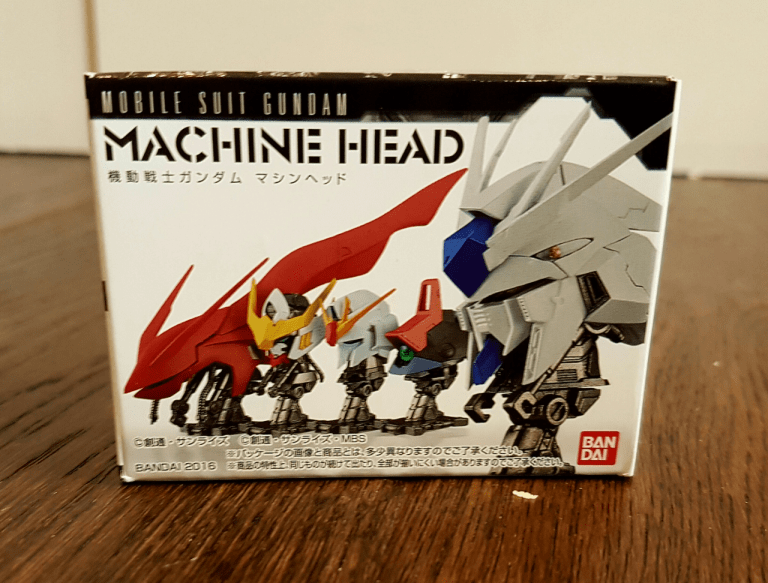 Another little Gundam figure, again in pieces ready to assemble. And as an extra bonus there is a piece of gum in the box too! 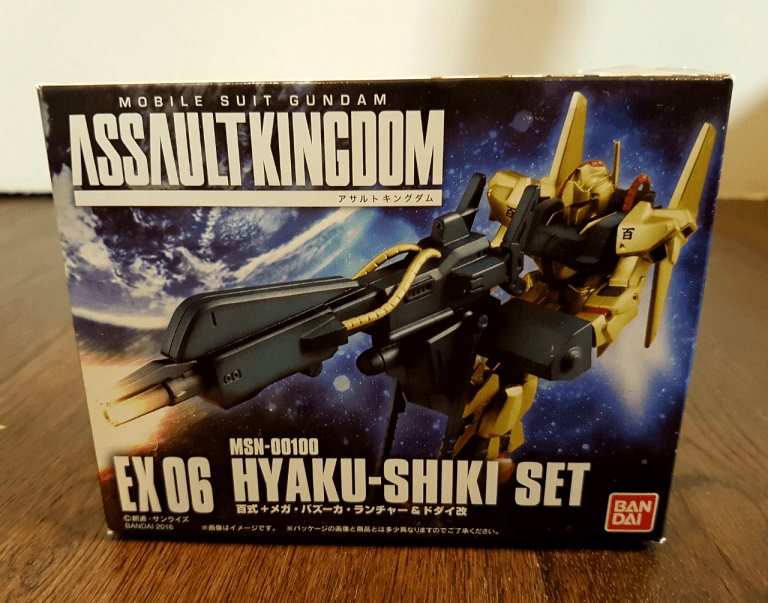 Slightly bigger figure, comes with a few cool accessories (weapons and a glider/plane thing he’s standing on in the picture).

OK, I left this one to last, because he’s my favourite. I give you 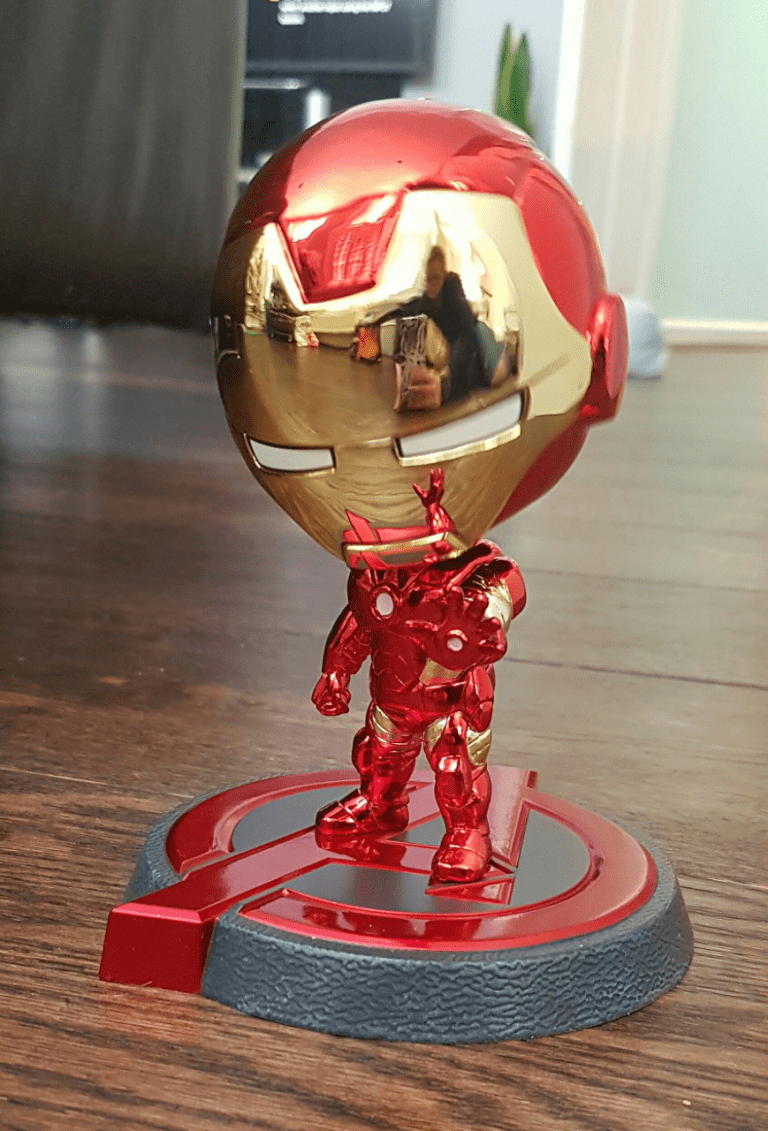 Iron Man! It’s one of the Hero Remix bobbleheads. This one is awesome, in lovely shiny full colour which is gold/chrome electrolyte plated. He’s so shiny you can see me taking his picture in his helmet. Plus his head is SERIOUSLY bobbly, I had to wait ages for it to be still so the picture wouldn’t come out blurry.

As a bonus, here is a picture of shiny Iron Man with plushie Iron Man from May’s Lootaku box. 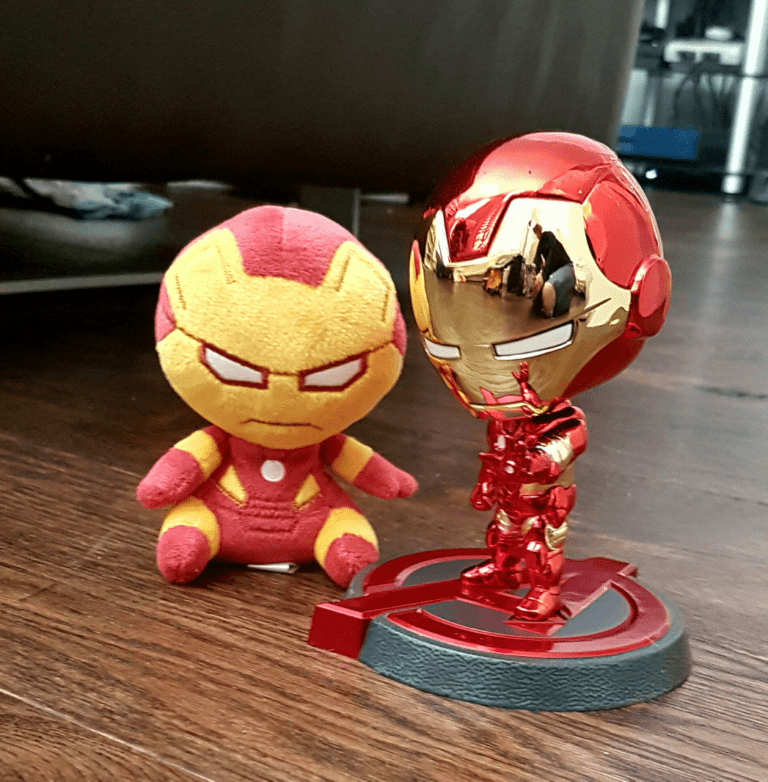 And finally, the menu. 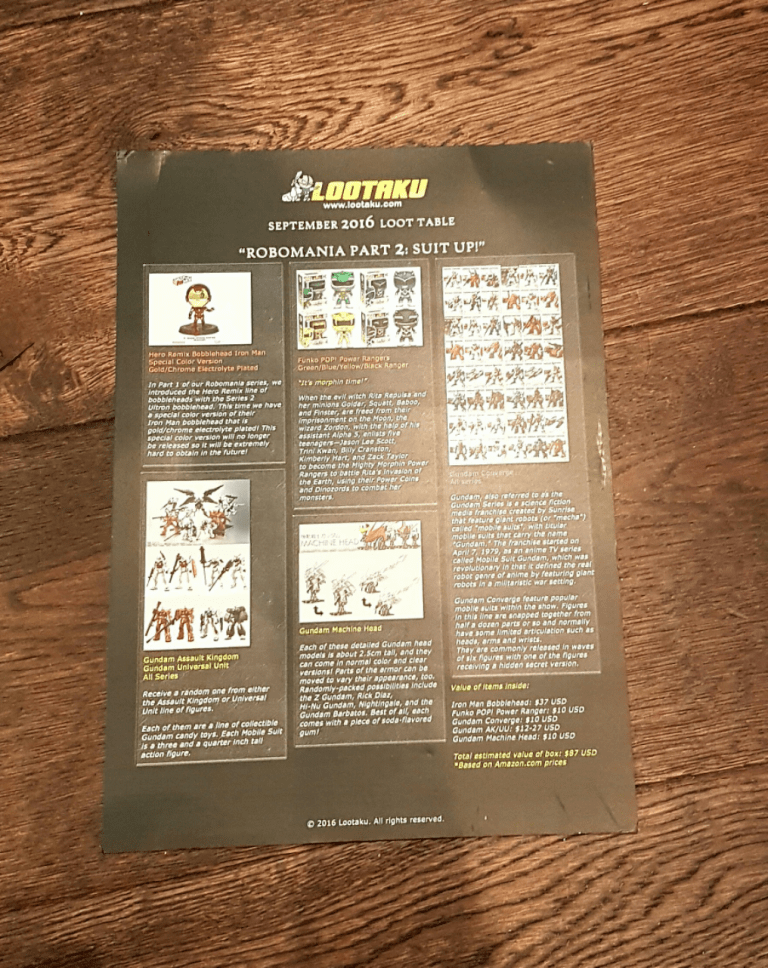 Didn’t come out too well. Sorry. Anyway, it’s great to have a menu, even if I don’t usually take too much notice of them. But it’s always nice to know the theme, or to get a bit more information about the series or toy items. What’s really good is that the menu is always at the bottom of the box. I hate spoilers, and prefer to unpack a box with the theme and each item being a surprise, rather than being told everything as soon as I open it up. I think more subscription boxes should keep the menu at the bottom, or at least face down so you don’t automatically see it.

The menu also gives the approximate value of the items so you can work out of you’ve gotten a good deal. Obviously the £ isn’t doing too well right now, so the values can change. However from previous experience the Lootaku box is usually pretty good value for money. I always use the HKD amounts to work out the £ equivalents.

Prices and values are given in Hong Kong dollars with approximate US dollar equivalents. A one month subscription is $380HKD/$49USD. According to my currency converter this is £39.52. Shipping is $145HKD  which is £15.08. Kind of pricey, but it’s coming a long way.

Gosh the £ really is in trouble huh?

OK, the contents. Using the magic of Google I’ll give the UK price of each item. Bear in mind Lootaku boxes often contain items which are next to impossible to find in the UK, so if you’re into rare items they frequently impress on that score.

Gundam Converge Figure: £6.50  This was really tricky. You can buy a set of six on Amazon for just under £38, but I couldn’t find them singly on any UK site. So I’ve divided and rounded up a bit.

Gundam Assault Kingdom figure: £12.00 Damn, this thing is impossible to find in the UK. I managed to find it on a couple of American sites, plus several Japanese ones, so having looked at the vast array of overseas choices I’ve gone with the value above.

OK, so this is just under the wire for extra value. Please note that finding retail values for some of these items was extremely difficult, and I did a fair amount of estimating. I think it’s reasonable to assume that at least one of the Gundam figures counts as rare, and so I probably underestimated its value, given that it might need to be ordered from some obscure Asian website and shipped over at great cost!

Also, as I said, the £ is not in good shape, and given that in previous months the total cost of a box has been under £50, they are as a rule excellent value for money. And even taking my approximations into account, you’re still getting you’re money’s worth! Oh, and I listed the one-month subscription price; the three- and six-month packages are cheaper per month.

This is a good box. The theme is a little niche for me personally, as robots aren’t really my thing, but as always it has a good variety of items, and contains nothing naff or obviously promotional. The menu is informative, the boxes are always packed well and nicely designed,

There are plenty of geek-type boxes out there, and I’ve looked at a lot of past boxes of various companies, as well as buying a few myself. I would say that Lootaku is certainly one of the most interesting ones out there. I think they lean slightly towards anime, which would make sense as they are a Hong Kong company, but by no means are they exclusively so. For example, they did awesome Game of Thrones and Marvel boxes, and even the more anime-type themes generally have something for every geek. I am also impressed that their items are always of excellent quality, with no promotional/freebie tat thrown in to bulk up the numbers. While this particular box is actually exclusively figures of one kind or another, they usually contain at least one other item. Not that it’s particularly important, as most people love figures, but it’s quite nice to mix it up. My favourite so far is the Iron man plushie, as you may have guessed. I’m really enjoying reviewing these particular boxes, not least because I’m being introduced to all kinds of characters and series with which I was not familiar, and also because it’s very clear how much thought is put into the selection of their items.

Anyway, that’s all for now folks! Apparently the October box is due soon (supplier delays) so with any luck I’ll have a shiny new review very soon!