Lootaku, October 2017: Masters of the Sword 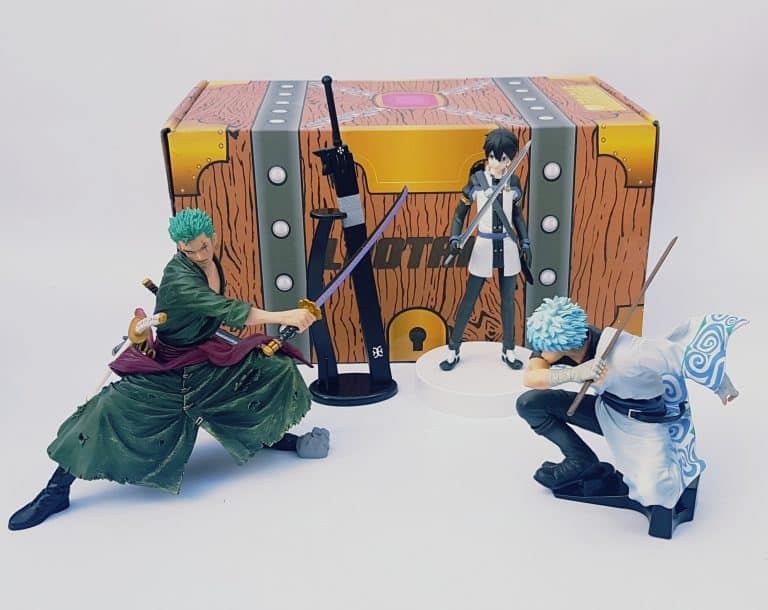 Prices and values on the Lootaku website are given US dollars. A one month subscription is $44.99 (three and six month subscriptions are cheaper). According to my currency converter this is £34.27. UK Shipping is $17.66 (£13.45). Slightly pricey, but this is a premium box. Also it’s coming a long way.

This month’s theme focuses on Sword Art Online, One Piece and Gintama. It is also a newer format that appeared for the first time last month. It contains three large figures plus one smaller item, so four in total. Usually there are five or six items, but they have included fewer this month due to the inclusion of more premium large figures.

Anyway, more on that later. 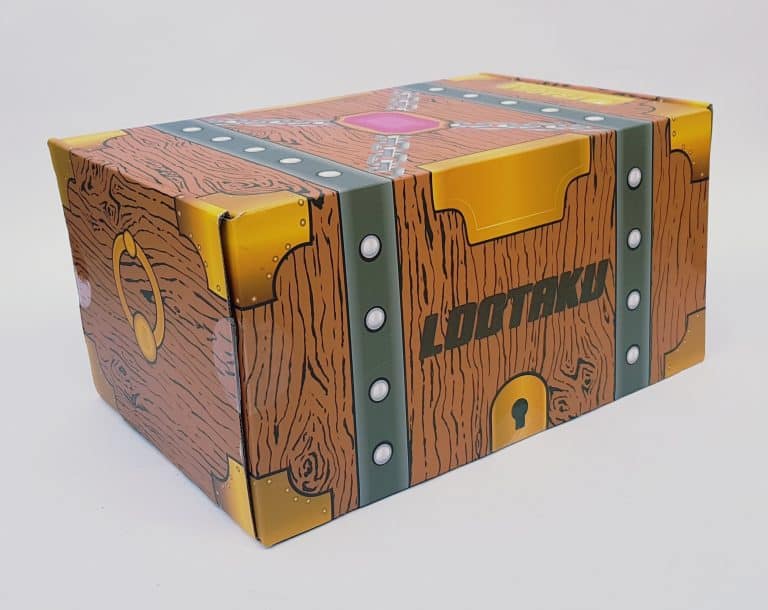 Lootaku has a fantastic shipping box! 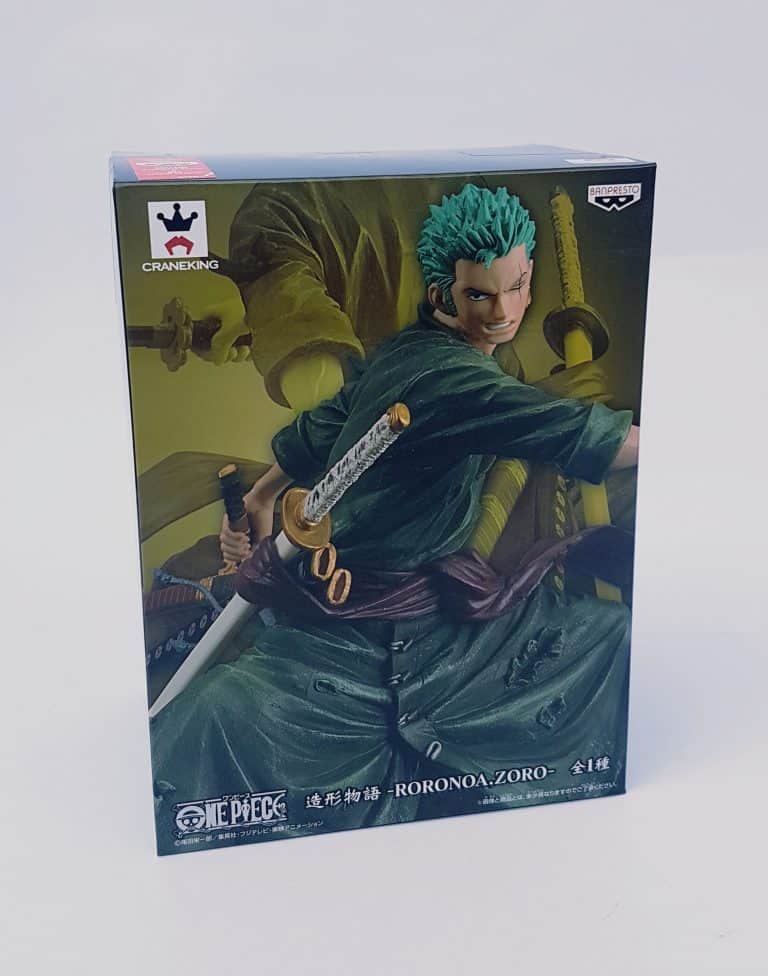 This is the first of the three large figures. One Piece Banpresto ZOUKEI MONOGATARI Roronoa Zoro. 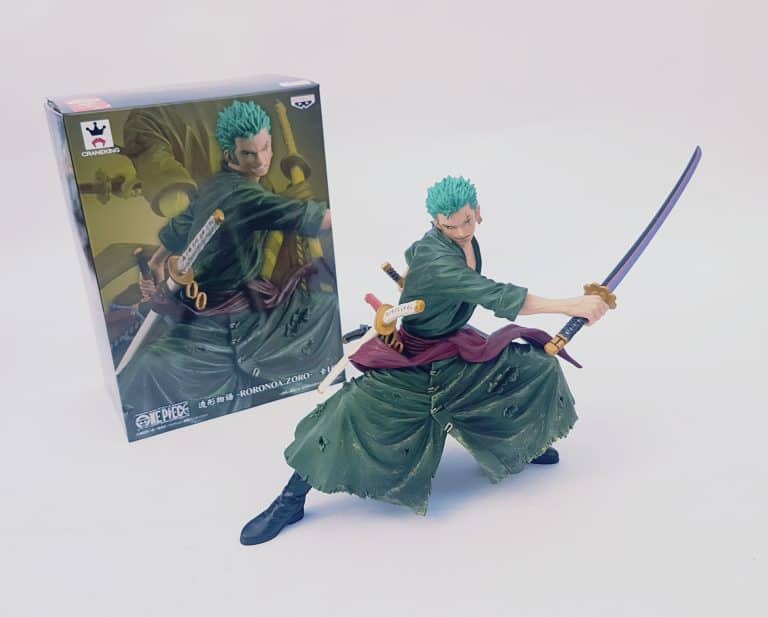 This series features characters in dynamic poses, capturing the character in movement.

Like all Banpresto figures, this one has superb detailing. 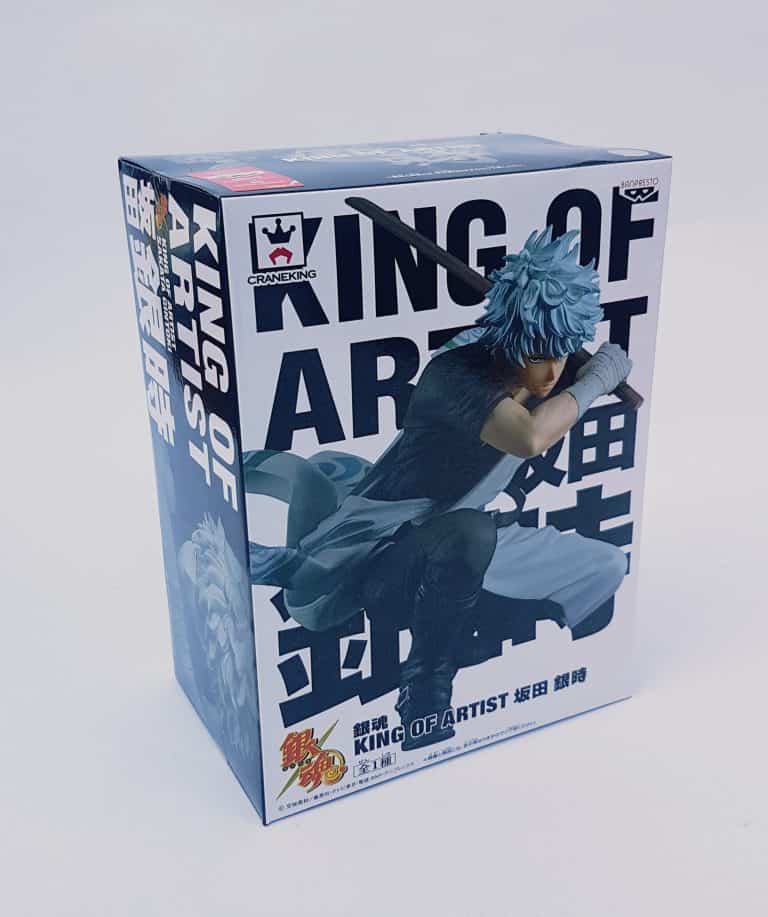 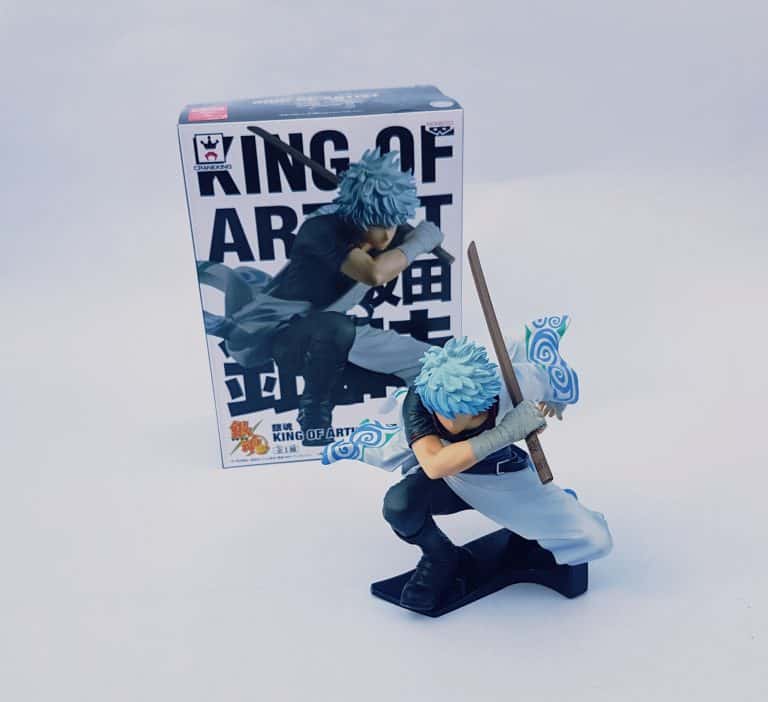 The King of Artist line showcases exceptional sculpts and colouring details. Banpresto large figures are always impressive, but this is exceptional.

This is also the first appearance of the Gintama franchise in a Lootaku box. 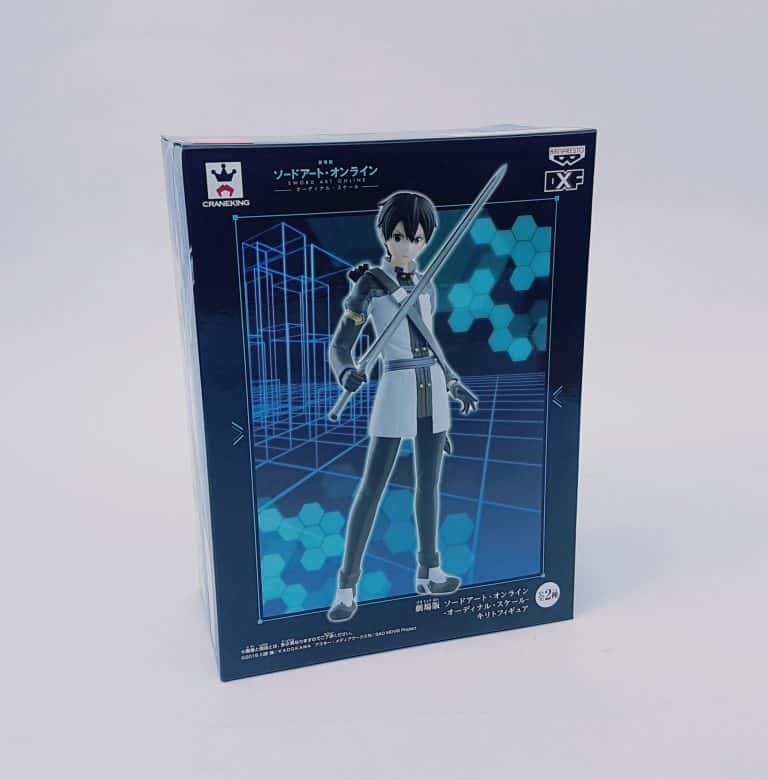 This Sword Art Online Movie: Ordinal Scale Kirito figure is the third of the large figures in this box. 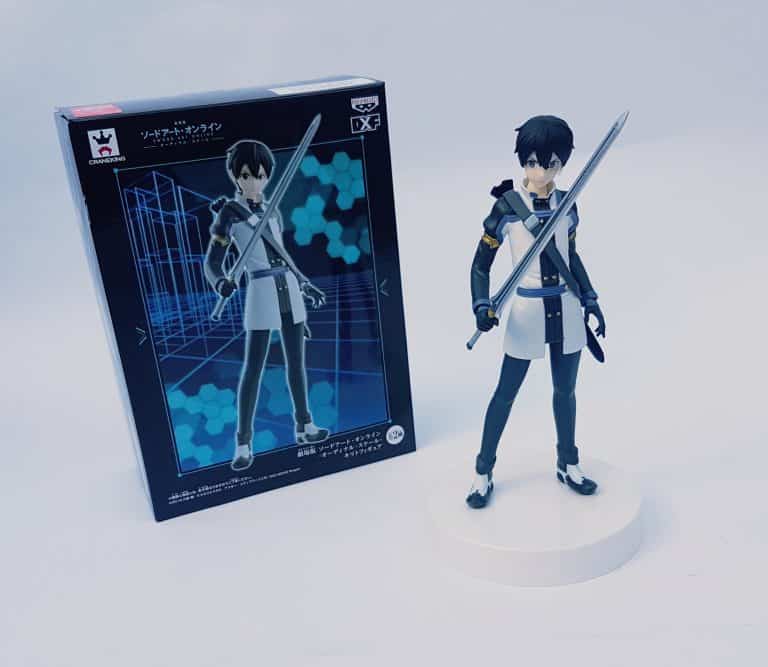 Again, beautiful detailing, this is one of two possible figures. The other is Asuna, from the same range.

The fourth item in the box is also from Sword Art Online: Elucidator. 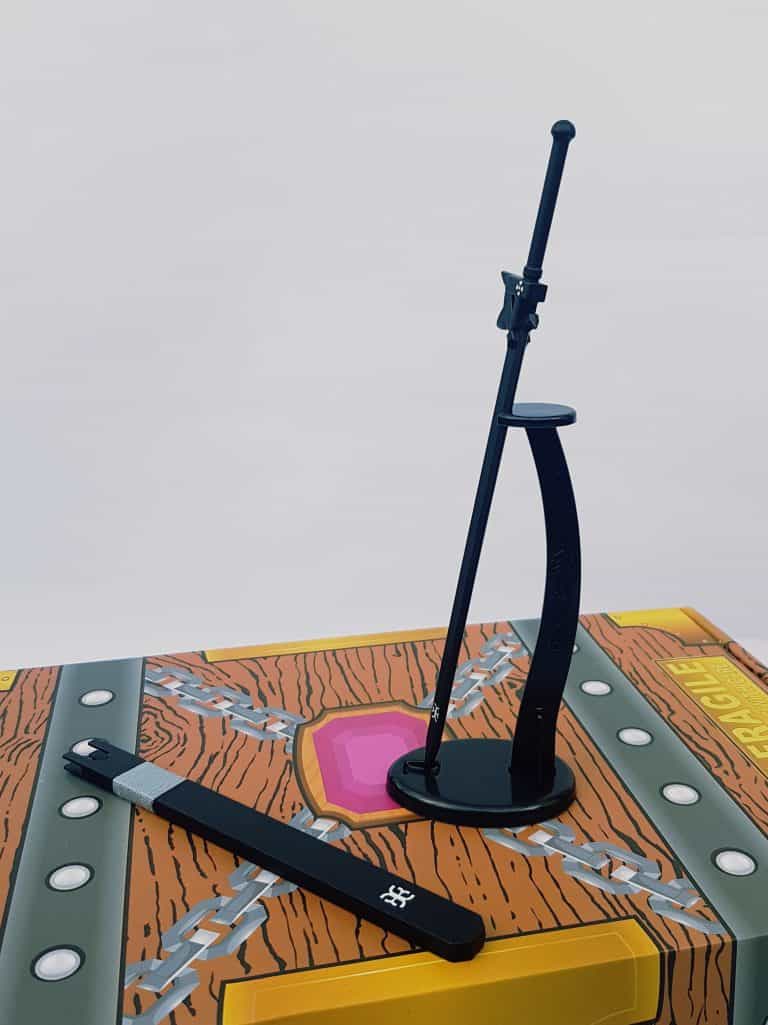 Replica swords are pretty big in the collectible world; I’ve had several in previous boxes.

The attention to detail is pretty impressive: it includes a stand and the sword and scabbard are separate but fit beautifully together. It’s also not at all sharp, though it would make an efficient letter opener! 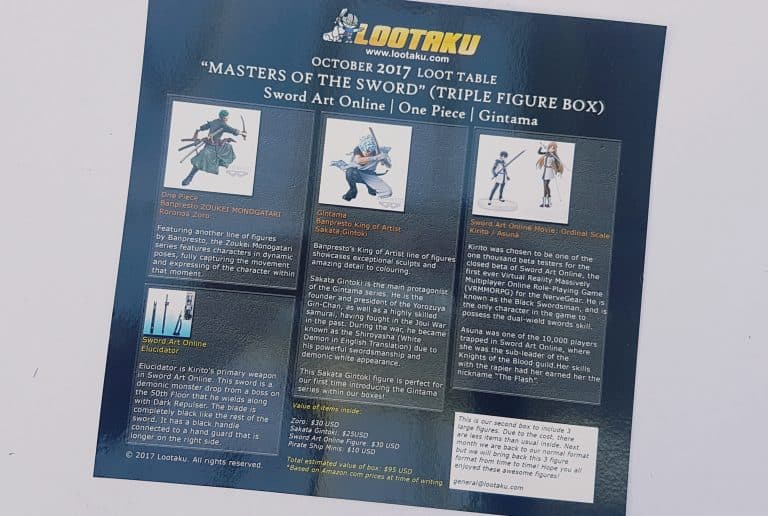 Smaller than usual, but still at the bottom of the box so no spoilers! It contains item details and values.

We saw at the top that the monthly subscription is £47.72.

One Piece Roronoa Zoro: €32.00 (£28.30) I found this on a site specializing in collectibles, but it appears this figure is not going to be released until early next year! This price does not include shipping.

Elucidator replica: I couldn’t find this online; I suspect it’s an Asian exclusive item. I’m going to estimate it at £8.

So this is well over the value of the box itself.

Now then, I can’t quibble with the value. It’s superb, as Lootaku always is. It is a premium box with premium items.

As I mentioned earlier, this second time they’ve gone in a different direction with the format, including three large figures. Past boxes have generally included a maximum of two figures of this size.

But like last month, there’s something about this box which leaves me a little cold. The quality and value are excellent, but I can’t get excited about a box which only contains figures. If figures are the only thing that float your boat then you would be over the moon.

However, I’m a geek, but I like a little variety in my geeky stuff! Plus stuff I can actually use.

The last few months Lootaku have been including some really awesome non-figure items in their boxes, and I’ve absolutely loved them. Last month, for example, they included the most gorgeous backpack, and I’ve also acquired such items as scarves, coasters (exclusive and gorgeous) and plush figures.

So yes, awesome value, and yes, great quality, and yes, super-premium figures. It’s exciting they’ve introduced a new anime franchise into their boxes. There’s some hard-to-find stuff in there.

But I’m happy to see on their menu that next month they’re returning to their regular format. There are indeed splendid premium figures, and I’ll be very glad to see some of their awesome creativity in next month’s box!