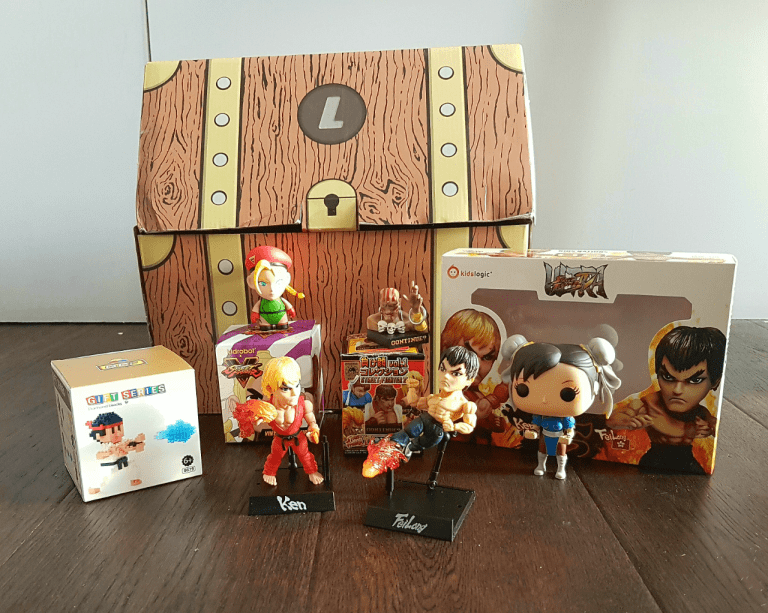 I received this box a few days ago, but having spent those days dealing with my daughter’s birthday and subsequent party (both remarkably time-consuming and exhausting), I’m now finally getting a chance to sit down and write the review.

So, a new Lootaku box, hot on the heels of the late but utterly awesome Harry Potter box. This time I knew nothing about the contents, so the theme was a total surprise. This time my husband was also with me while I was unpacking, so this review will also include some of his thoughts, as he is rather a fan of Street Fighter.

As always, the box is nicely designed and sturdy. And it rattled. 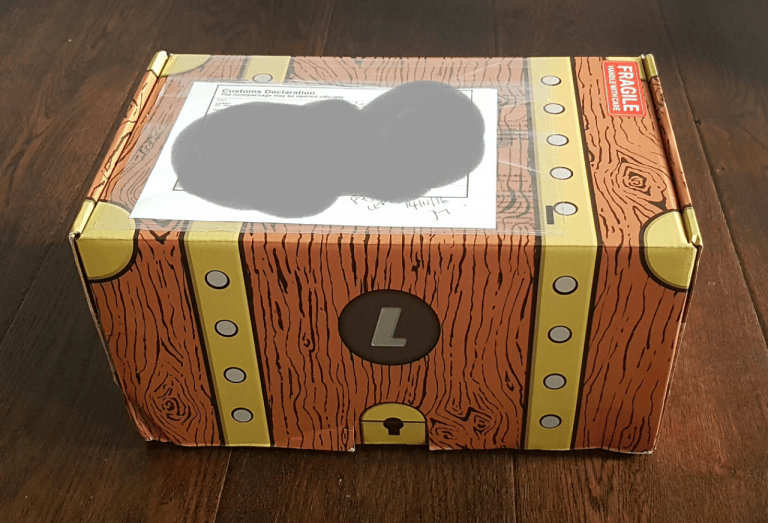 And opening it up, I see why. 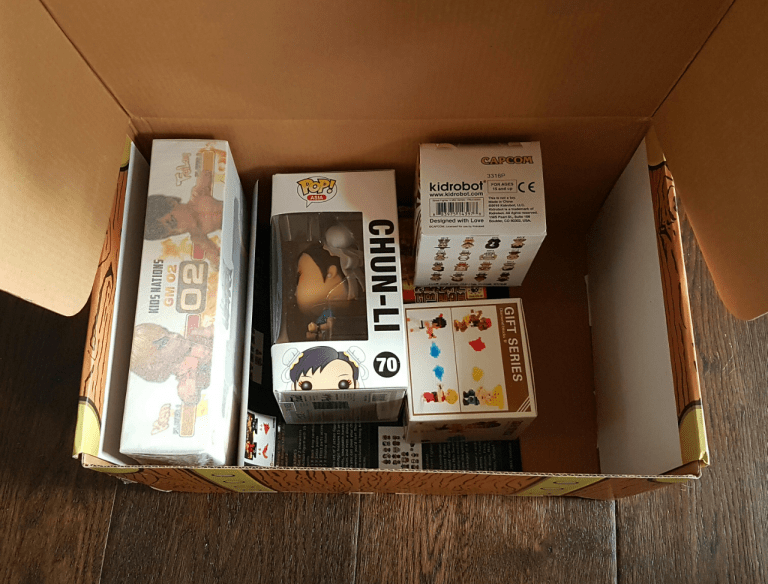 It makes total sense to always use the same size box, but of course of the contents don’t fill it there is likely to be some rattling around! But everything was in perfect condition, despite travelling all the way from Hong Kong. Impressive. So anyway, it looked rather figure/toy-heavy.

The first thing I pulled out was this little guy. Or rather girl. 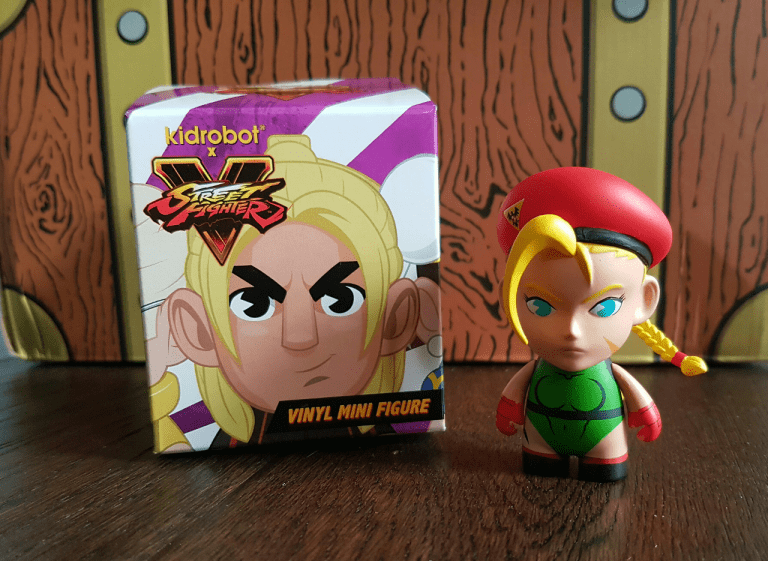 My husband looked over and immediately said ‘is that Street Fighter stuff?’. After a brief glance in to the box, of course the answer was yes. Anyway, this is a blind box minifigure, which as I’m sure you know means you don’t know which one you’re going to get out of a possible sixteen. This lady is Cammy, from the Kidrobot minifigure series. Apparently she was played by Kylie Minogue in the Street Fighter movie (to quote my husband, the godawful movie). Anyway, she’s a little 3″ tall figure, and pretty cute; she’s in her costume from Street Fighter 2. It’s always nice to have female characters.

Next up, a Diamond Blocks figure. 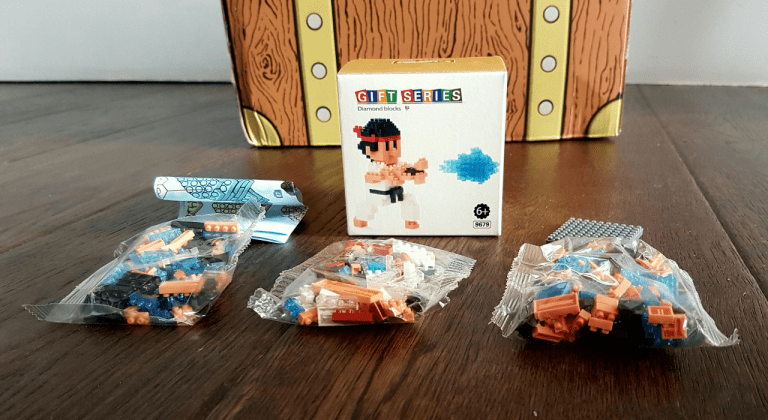 Diamond Blocks is basically mini Lego. You either got Ryu or Ken; I got the Ryu figure. Like Lego, you get bags of pieces and instructions, and put it together yourself. Unlike Lego, this was a bit of a disaster.

My husband and I both love putting together Lego so we were kind of excited about this one. Even though the box says 6+ there is no way a six-year-old would be able to put these together. Not only are the pieces TINY, the instructions aren’t that great. But anyway, I gave the bags and instructions to my husband and told him to put it together so I could take a picture.

First there were puzzled noises. Then there was swearing. Obviously I thought my husband was simply being hopeless and I could do better, so I took a look myself. Cue more puzzled noises and swearing, this time from me. After several minutes of this,  we figured out that the box contained the wrong bags: instead of bags marked A, B, and C, we got two bags marked B and one marked C. So we couldn’t put this together. Of course it’s not the fault of Lootaku that Diamond Blocks screwed up, but it was extremely annoying. So we were left with this. 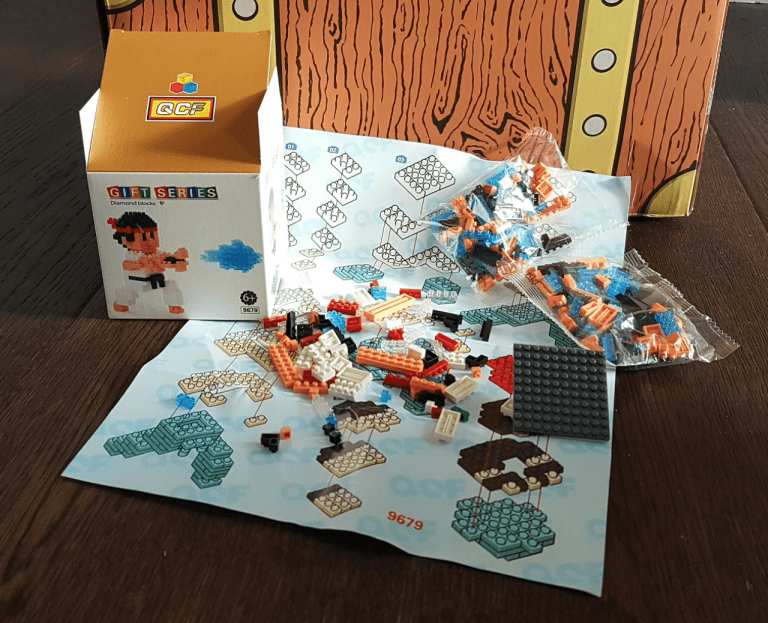 (You can’t see the blood sweat and tears.) 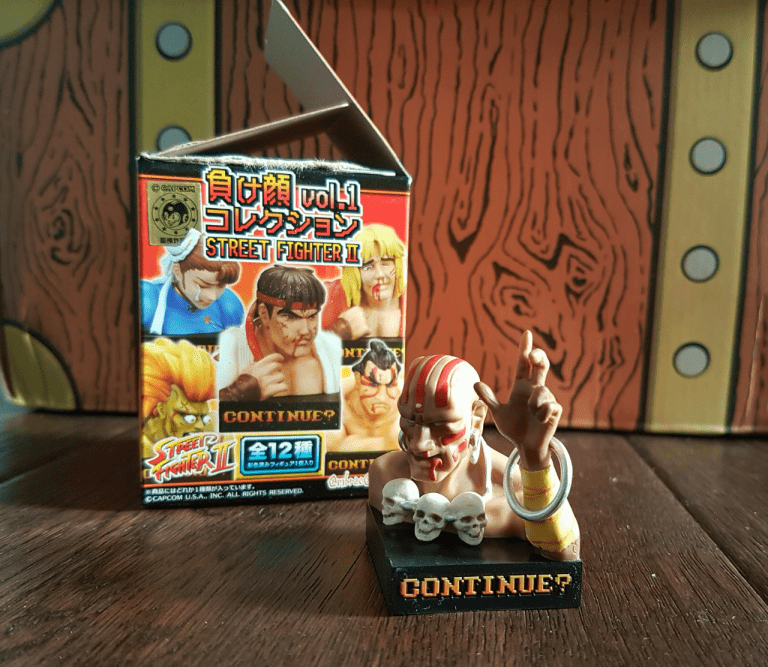 Another blind box figure (or rather head), this time from the ‘Losing Face’ collection of Characters from Street Fighter 2. This guy is Dhalsim. He does not look happy.

Now we have another POP. 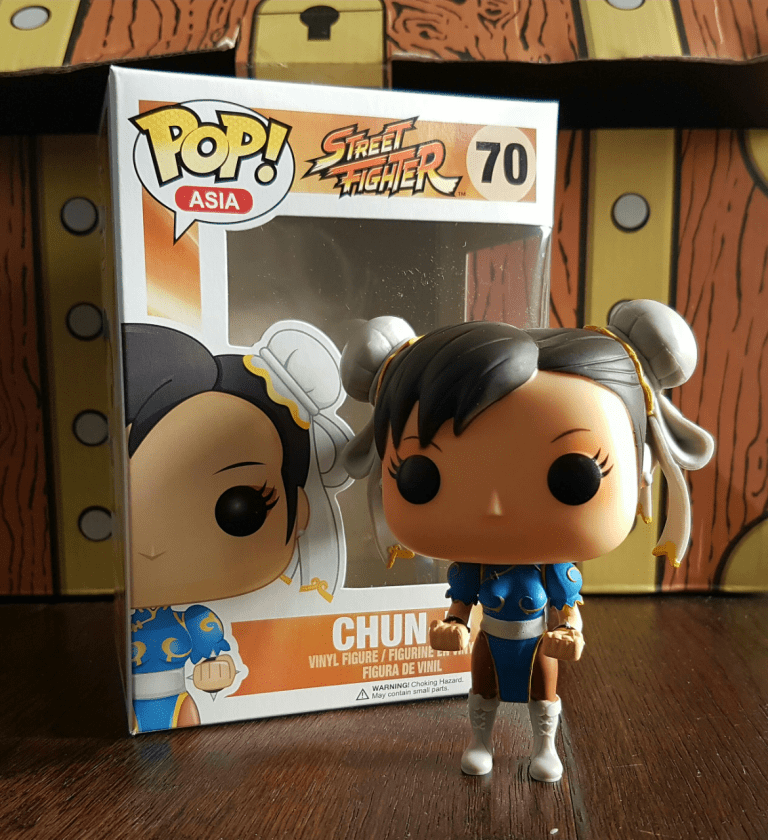 Another lady, I like it. This is Chun-Li, from the new Street Fighter range of POPs, and is one of a possible seven. Although she looks cool, she had a major design flaw. You see those bobbles of hair on top of her head? Unfortunately these made her completely unbalanced, and she won’t actually stand up. In this picture she is actually leaning against the box so she doesn’t tip over backwards. Again, not the fault of Lootaku, but after the Diamond Blocks debacle we were starting to feel ticked off. 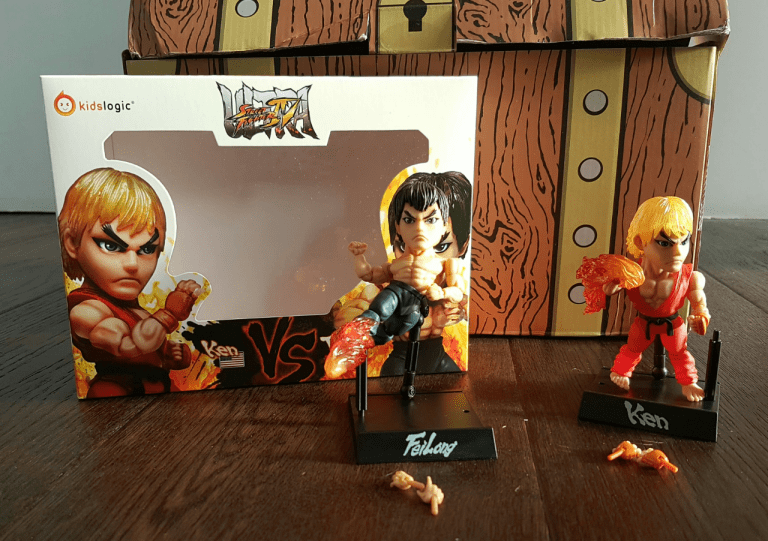 Ken vs Fei Long action figures from Kidslogic. These guys are something. They have articulated joints, two sets of hands that you can swap, plus crazy fire that you can attach to them. Here’s them in their box: 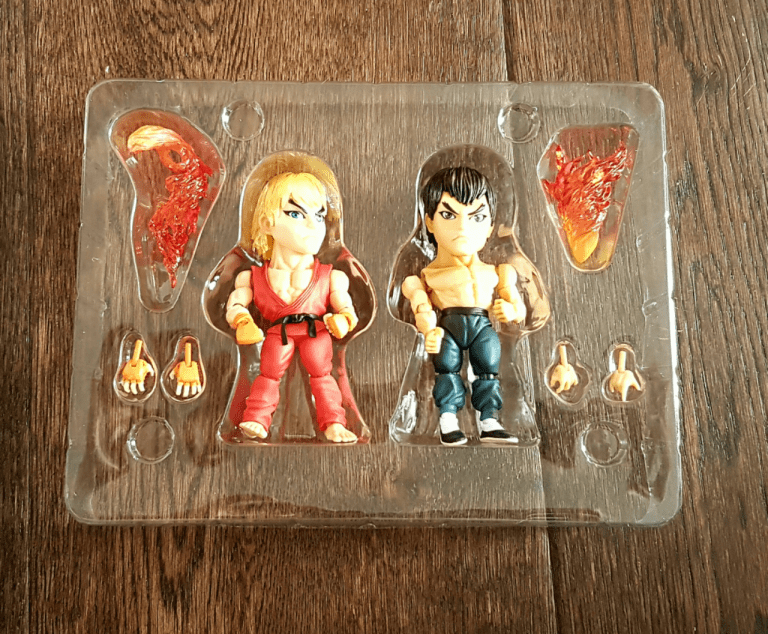 Little stands are included. I have to say, these are cool, but incredibly fiddly to put together, and slightly precarious to stand up. They look amazing, but I can’t imaging actually playing with them, as bits have a habit of falling off, plus I’m pretty sure those hands would get lost almost immediately. But anyway, they’re pretty nice figures. They’re also apparently exclusive to Macau and Hong Kong, so this is a proper rare item. 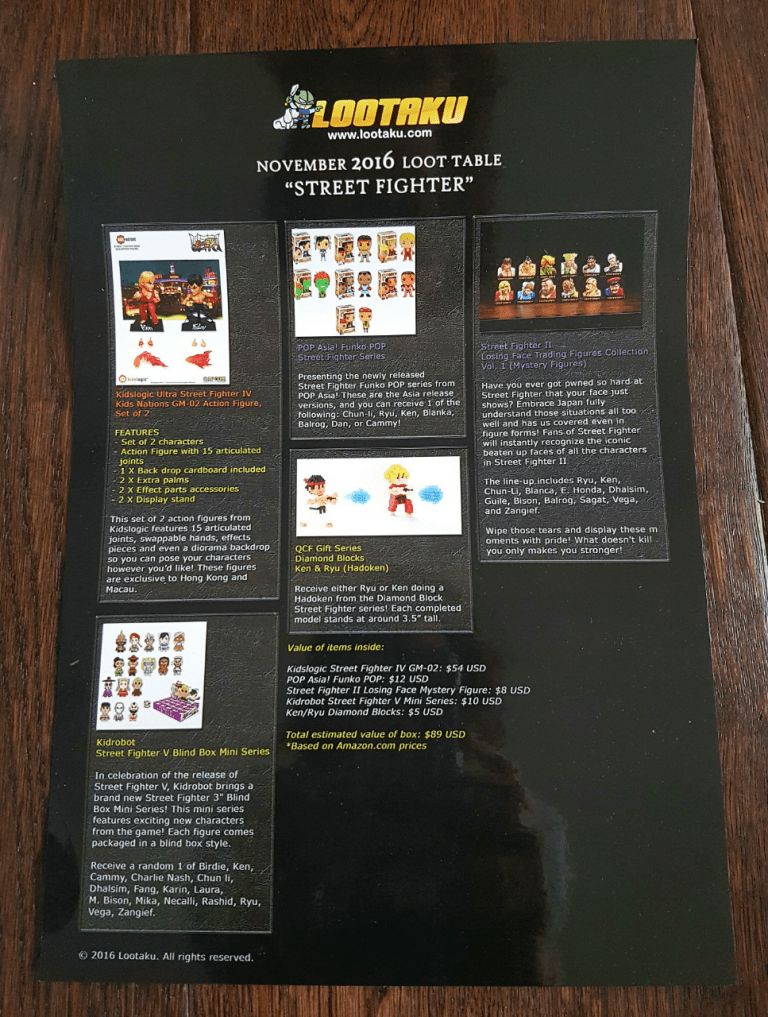 And finally, the menu. As always it’s at the bottom of the box (yay no spoilers!), and has a nice little bit of blurb for each menu item. You also get approximate USD values for each item, in case you want to figure out if you’re getting your money’s worth. (In my experience you always are.)

As always, I try to find the £ values/costs of each item, and add them to the £ cost of the box itself. I use an online currency converter so they’re correct at time of writing. I can’t always take into account shipping costs of individual items, but I do my best to be fair. Often I can find things on Amazon, but some of the items in Lootaku boxes are nigh on impossible to source in the UK, so sometimes I have to guesstimate. I also don’t use eBay as reference, as I find prices are not reliable or realistic.

Prices and values on the Lootaku website are given in Hong Kong dollars with approximate US dollar equivalents. A one month subscription is $380HKD/$49USD (three and six month subscriptions are cheaper). According to my currency converter this is £39.28. Shipping is $145HKD  which is £14.99. Kind of pricey, but it’s coming a long way.

Let’s see how the contents stack up.

I couldn’t actually find this exact one, so I’m going by similar sets. I’m also ignoring the fact that it was incomplete/wrong.

I found a place that imported these into the UK. The original price was in Euros but I converted it.

Wow, that last item really bumped up the value.

I’ve got very mixed feelings about this box. The value is excellent, and there is at least one rare item. The fact that one item was useless and another was poorly designed is not Lootaku’s fault, but it was certainly unfortunate. The main problem is that it is all really samey. The contents are basically five toys/figures. Now, Lootaku does not do t-shirts as many other boxes do, which is totally fine. But in my experience the boxes generally include at least one non-toy item. OK, Robamania 2 didn’t, but I was so in love with the Iron Man bobblehead I didn’t care. My husband, who loves Street Fighter, found the contents disappointing, and said that after 25 years of the franchise, endless versions and reiterations of the characters, and a vast array of merchandise, comics, and novelty items, just having figurines felt somewhat dull and lazy.

I’m not a Street Fighter fan, and know very little about the franchise, but my feelings were similar. None of the items really grabbed me, and even the rare and technically cool action figure set kind of annoyed me, not least because it was rather fiddly and fragile. I understand a rabid fan might get a lot out of them, but there were not really something to play with. Again, only having figures is not really that fun, unless you are someone who has shelves purely dedicated to displaying your precious figures, and you don’t actually use anything. If your thing is figures figures figures then great, this is an awesome box for you, but it really didn’t feel like a whole lot of thought had been put in to it. This is especially noticeable because previous boxes have been so well thought out and varied. Of course, having had some problems with the previous Harry Potter box, it may have been that Lootaku didn’t have much time to put together a good range of items. And of course I’m sent these boxes for review purposes. But I think this box would be a disappointment to all but the most dedicated Street Fighter figures fan. And I’m not even taking into account the dodgy POP figure and completely duff Diamond Blocks set. If I was shelling out my hard-earned cash I would have been seriously ticked off.

So, sorry Lootaku, you were not at the top of your game for this one. And your other boxes are so damn good that it’s really obvious when one isn’t up to scratch! My expectations are high for this company, and this time they’ve not been met. I’ll forgive you, because I’m sure that next month will be back up to standard, and Harry Potter was so incredible, but seriously this is, I hope, an anomaly.