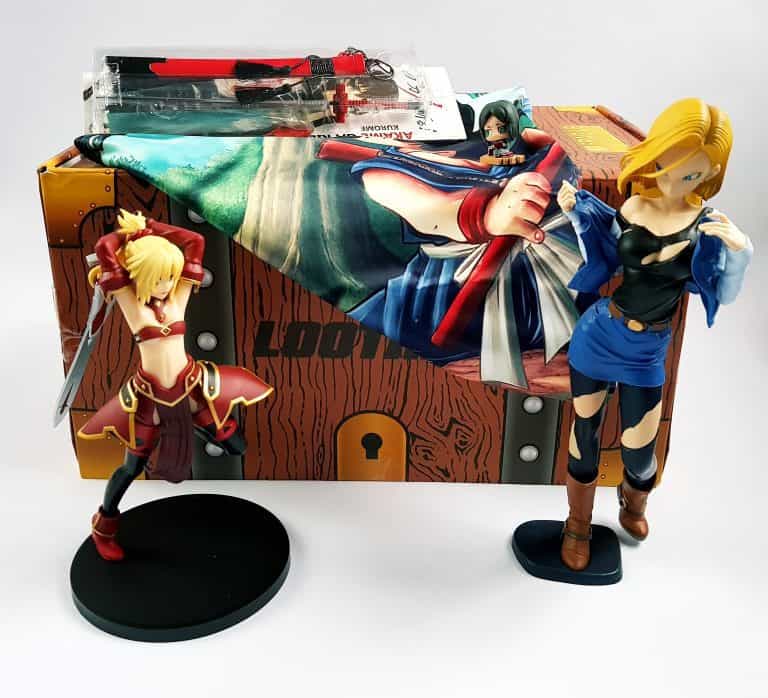 Prices and values on the Lootaku website are given US dollars. A one month subscription is $44.99 (three and six month subscriptions are cheaper). According to my currency converter this is £32.27. UK Shipping is $17.66 (£12.67). Slightly pricey, but this is a premium box. Also it’s coming a long way. 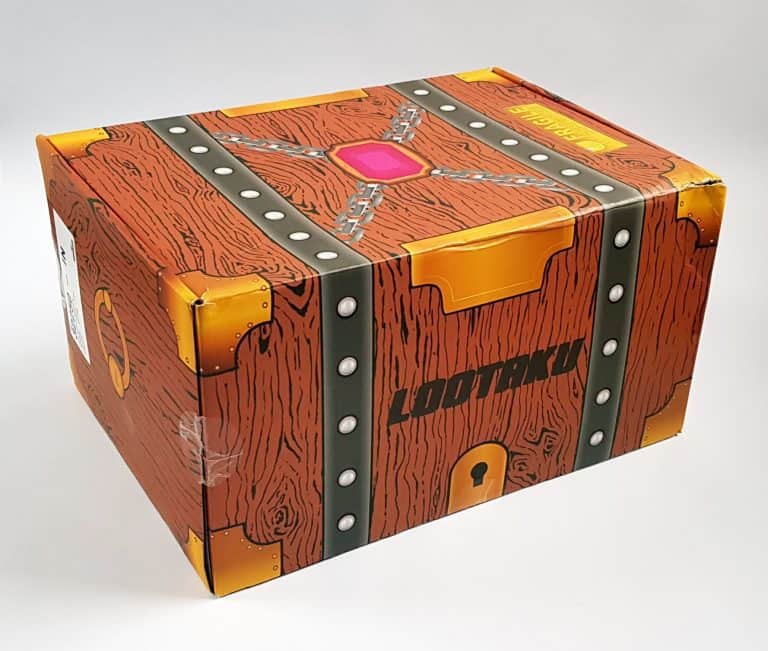 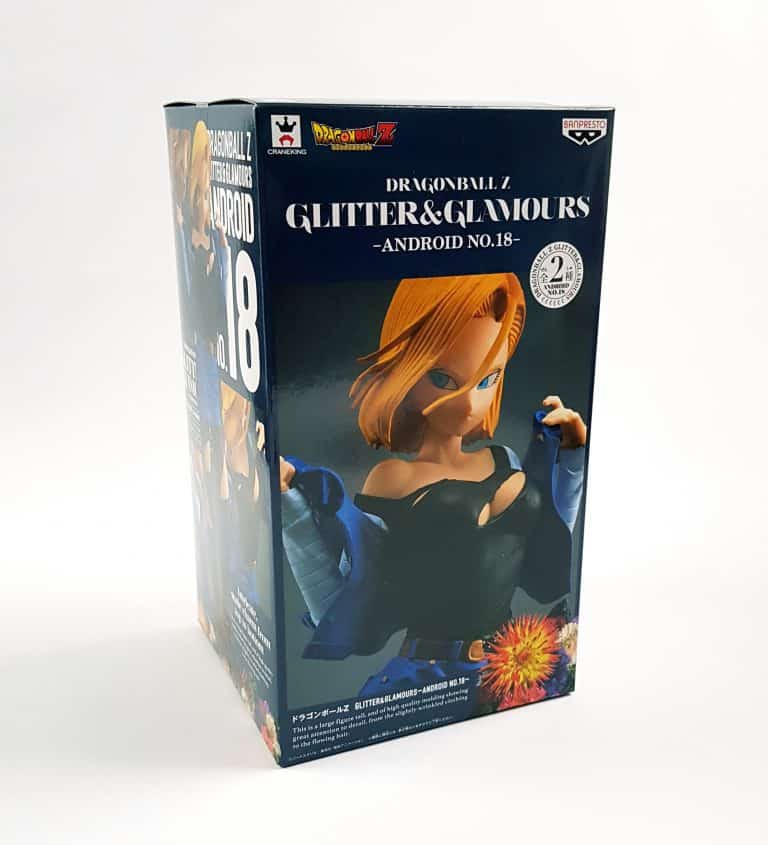 This is a Glitter and Glamours Dragon Ball Z Android 18 figure. 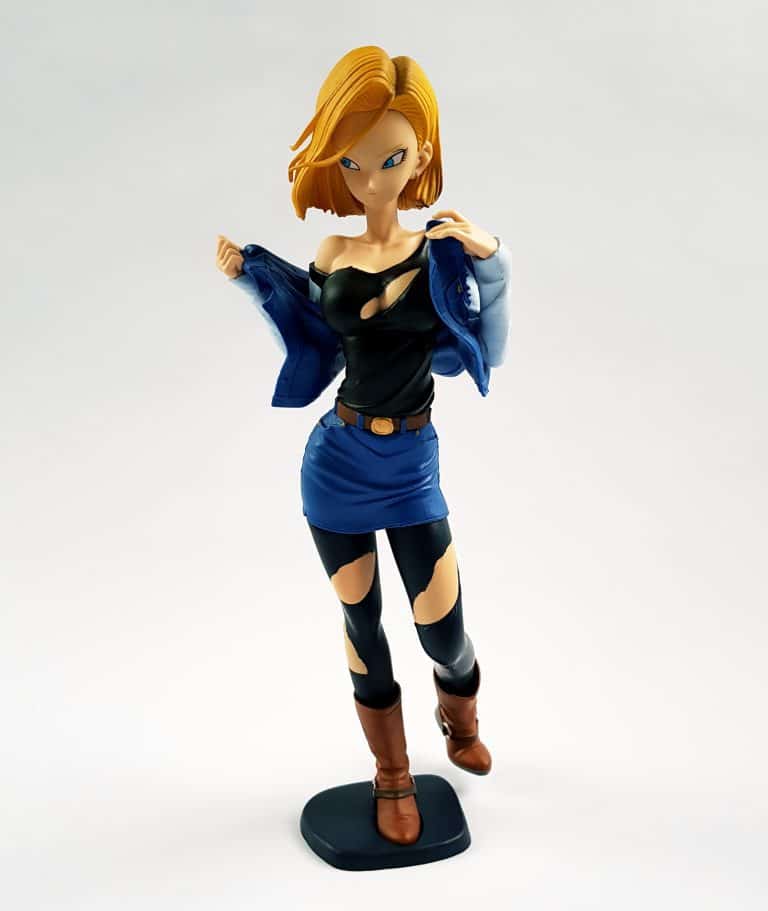 These Banpresto figures are a fairly new series showcasing female characters at their most glamorous! 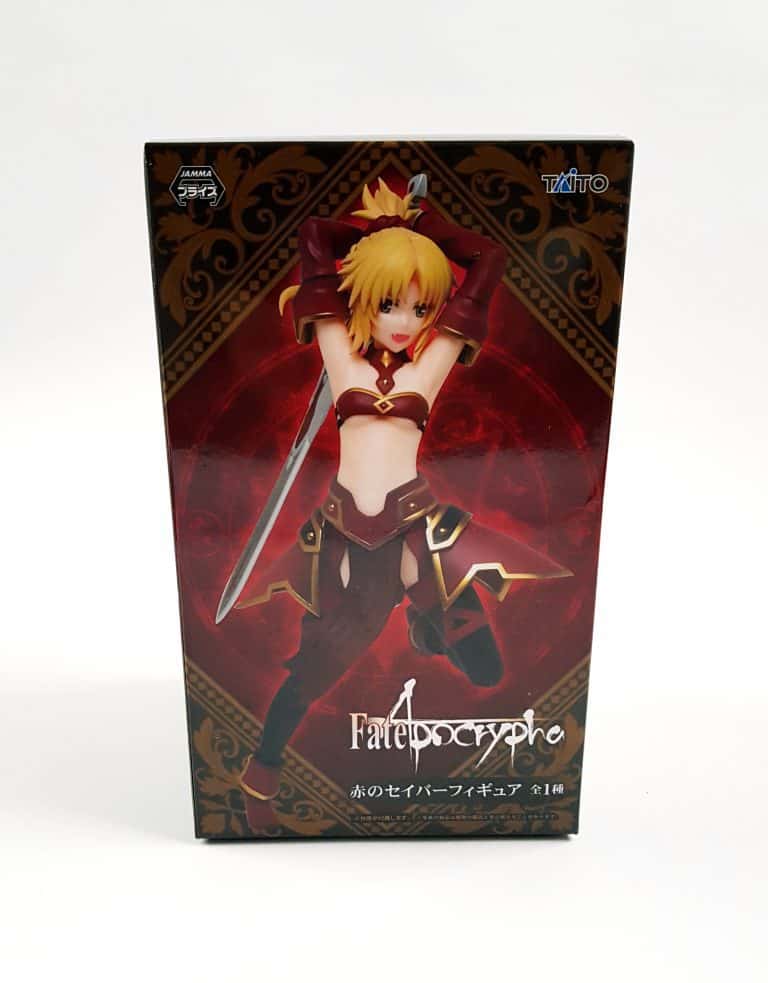 I’m not familiar with this character: Taito Fate/Apocrypha Saber of Red. 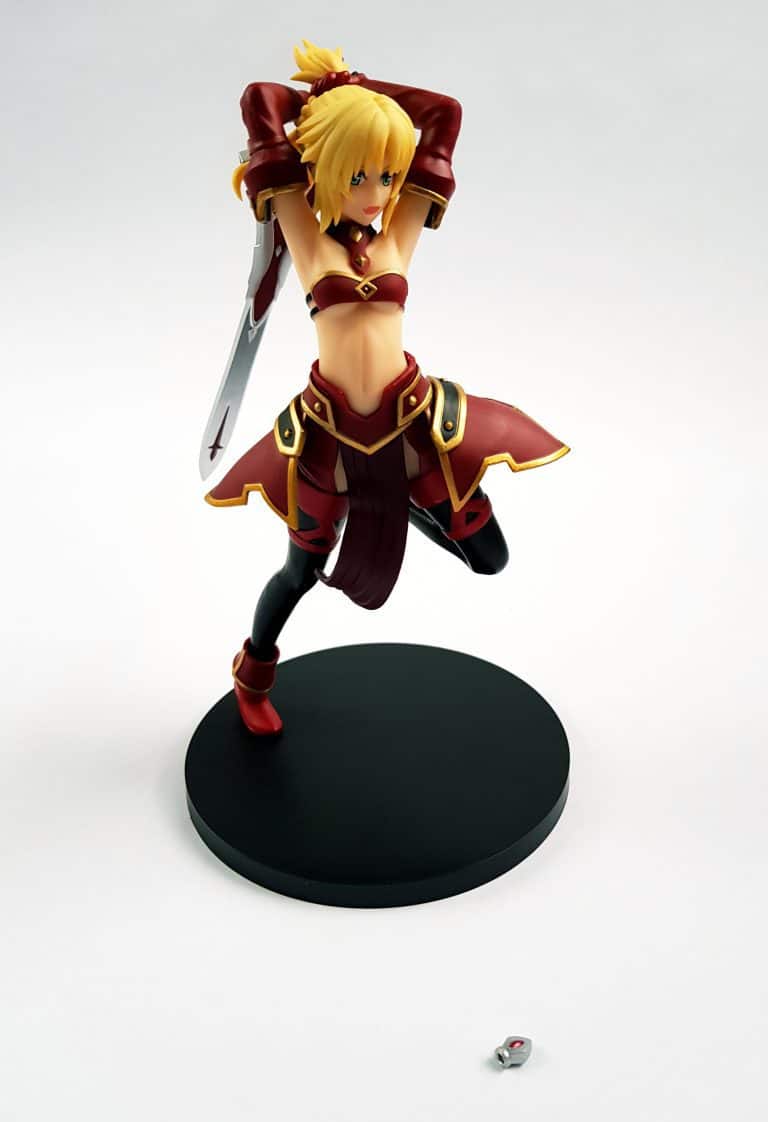 It’s a great figure with a dynamic pose, but it actually arrived with the tip of the sword handle broken, you can see it at the front of the picture. 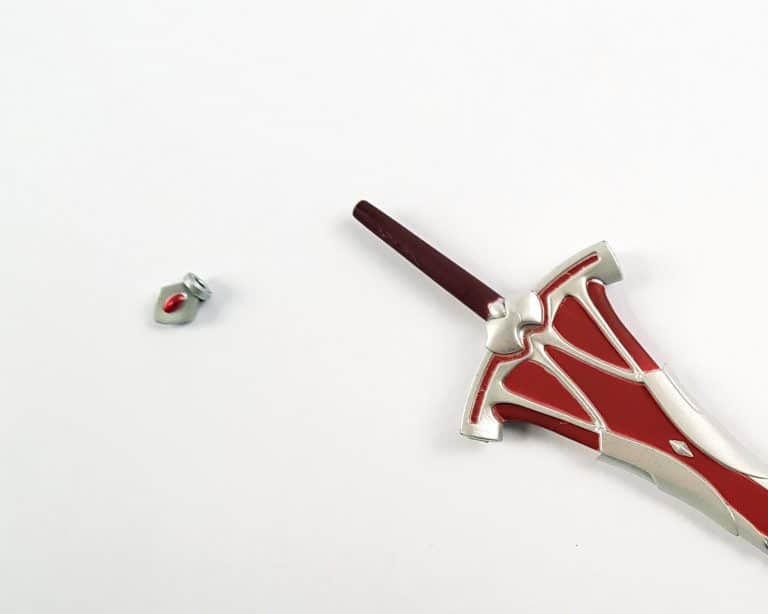 It’s supposed to detach from the handle so you can fit the sword into the figure’s hand, but it seems it’s such a small piece that it was too fragile. It doesn’t stop the sword from fitting in the hands, but the decorative piece is missing.

UPDATE: I got a lovely message from Lootaku with some useful information in it!

First of all, they will replace any item that arrives damaged.

Second, Taito is an arcade and video game developer. They also release figures and items every month for crane machine prizes.

This replica sword is One-Cut Killer: Murasame from the manga series Akame Ga Kill. Like almost all replica swords it has a keychain attachment, which is because it’s not allowed to import or send weapons through the mail! 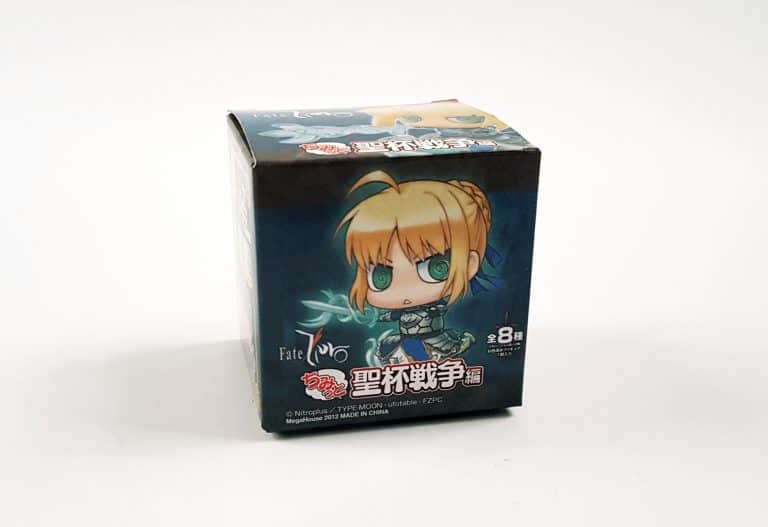 This is a Fate/Zero minifigure. 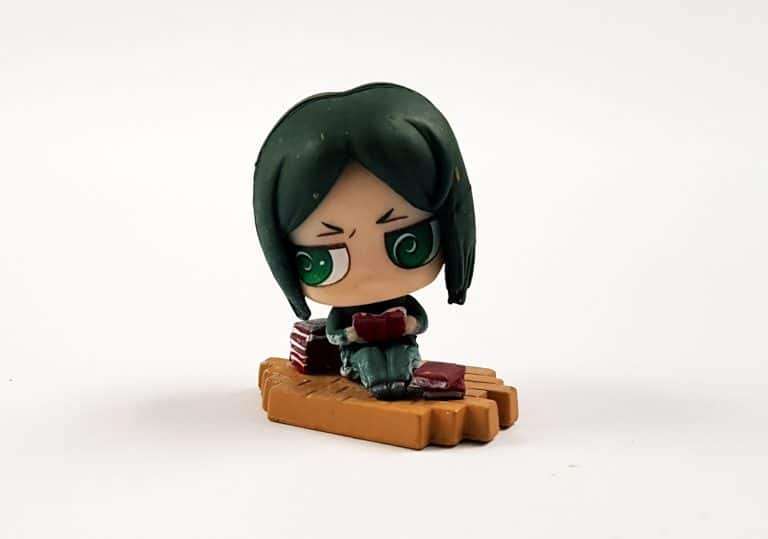 There are six possible figures, and this one is Maiya Hisau. 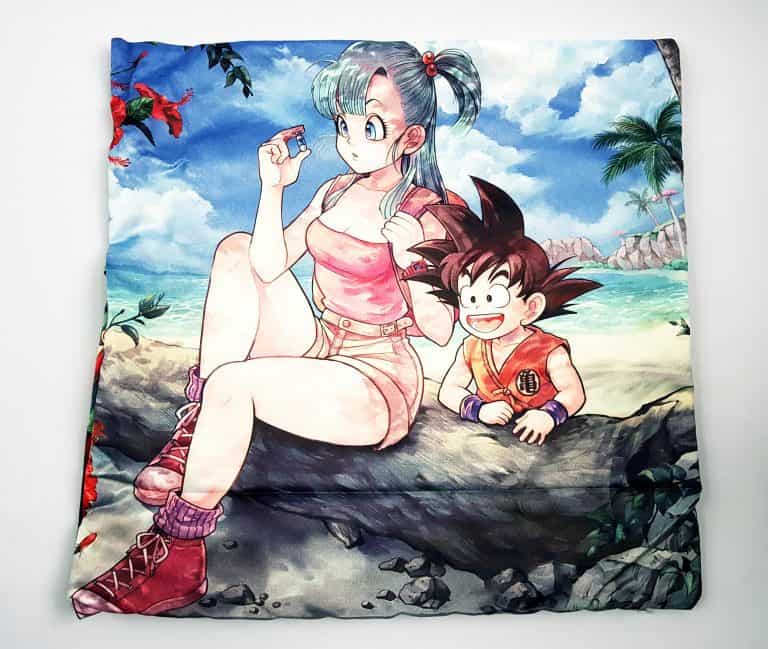 Finally, this is a cushion cover featuring Bulma and Goku from Dragon Ball Z. 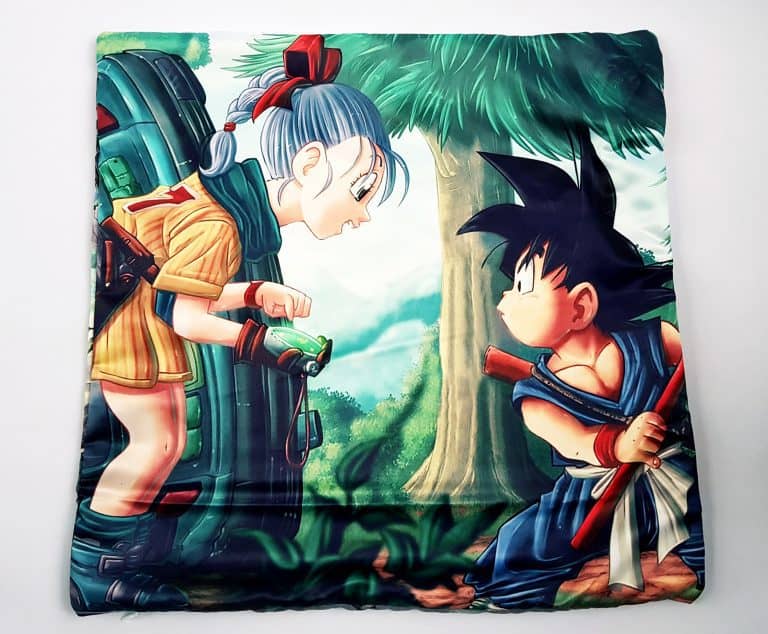 This is included in memory of the actress who played Bulma in the Dragon Ball series for over 30 years, and died in November.

We saw at the top that the monthly subscription is £44.94.

Replica Sword – I can’t find this for sale, so I assume it’s almost impossible to find outside of Japan and Hong Kong. I’ve estimated replicas like this before at £8.

Mini Figure – again, I can’t find a trace of this through regular Google, so I suspect another Asian exclusive. It’s cute but tiny, so I’m going to say £5.

Cushion cover – amazingly enough I found this on a site called Hoodietime, priced at $39.99! Now I’m not quite convinced about this value, so I’m going to call it £10.

So it’s great value, as long as you like the items.

I have to say that while I like the Banpresto figure, I think the Taito isn’t great. I’m very disappointed that it was broken, and there’s clearly a design flaw. I also don’t know the manufacturer, so I’m not sure how far it qualifies as ‘premium’. I’m also not familiar with this particular franchise.

Replica swords can be fun to have, and this is a pretty nice one.

The cushion cover is definitely cute, and it’s nice to have something a little different in their boxes, I’ve been missing non-figure items!

I like the slightly more female-character orientation to this box, as female figures are far less common than male characters! Though I wish I had known more about them.

My main problem with this is that three items are from a franchise I don’t know and don’t have a whole lot of interest in. I know there’s a ton of manga and anime out there, but I’m not a fan of this. So while the value of the box is great (leaving aside the broken figure) this one hasn’t got me that excited. This is more down to personal taste than anything else, but I’m glad that they’ve gone at least a little off piste with the cushion cover!