Reviewed by Mary on 4th February 2016 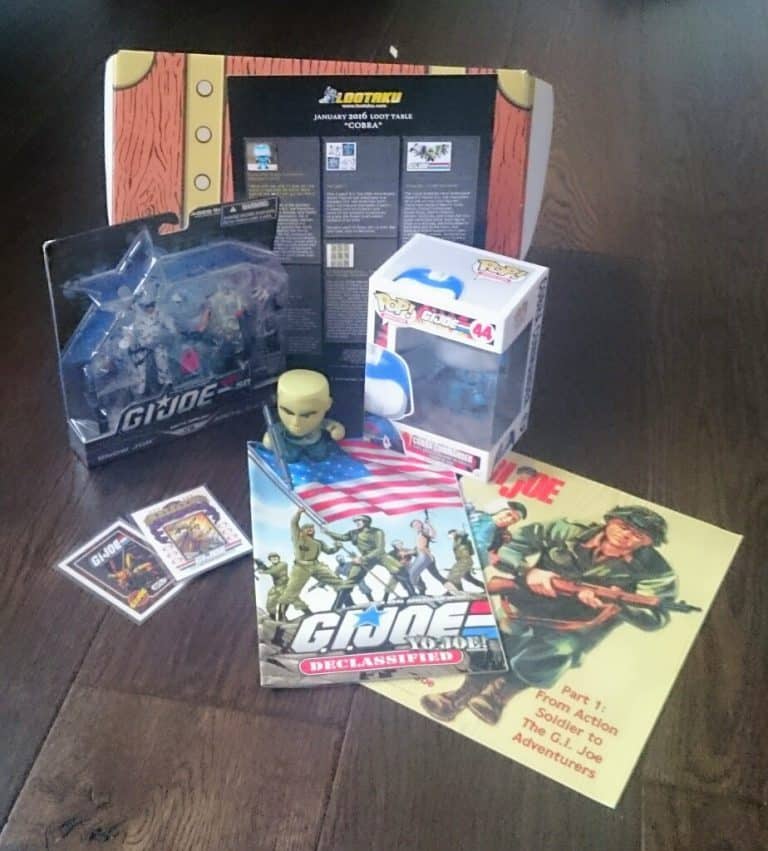 Lootaku is a newish (since August 2015) subscription box of various types of geeky/gamer goodies. This one comes from Hong Kong, though it ships internationally.

The box itself is awesome. It’s nice sturdy cardboard, and although there are the necessary shipping labels attached, the box is designed to look like a wooden treasure chest. That is, a cartoon version of one. The branding is great, with Lootaku printed on the box, as well as a stylized ‘L’. All in all, its arrival is guaranteed to get you excited about what comes next!

This was one of the POP figures that you can get of pretty much every character every created. It’s a nice addition to your collection, should you have one.

These are pretty cool. Always a bonus to get 2 figures (so they can play, or rather fight, together of course) and these guys also have plenty of cool accessories. The theme is ‘Arctic Ambush’. the Joe figure is all kitted out for extreme winter conditions, and even includes such handy extras as a cooking pan and a gasoline can as well as weapons. No way is Joe going to get caught out here. And the Arctic BAT has plenty of things that go bang too.
This is a really nice set. 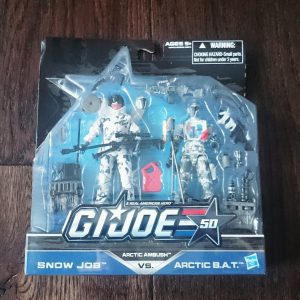 This came in a box and sealed in a little foil bag. There’s a list of options on the side of the box. I got Duke. It’s a little like a POP figure but with smaller, and with slightly different proportions. Nice.

For the enthusiast this is a pretty interesting magazine. It contains a little about the concept behind G.I.Joe, and how they started to be made. The rest is basically a catalog of all the original figures and accessories. They had some really cool stuff way back in the 60s.
G.I.Joe Vintage Trading Cards (Impel Series – 2pc)

They’re the usual trading cards, with a picture on the front and character information on the back. Each one comes in a little plastic sleeve to protect it. I guess you would trade them or keep them, depending on what’s your thing. 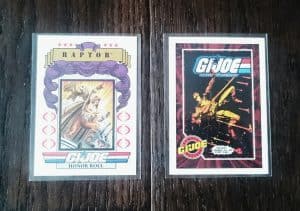 A comic book, which seems to be the first of a series. Apparently the cover is limited edition, which for a serious collector would probably be a plus. Though it’s about fighting and war, it’s all PG stuff, as despite the fact that lots of adults go crazy for this stuff, it’s definitely aimed (technically) at kids in terms of content. So just fine to hand over to your seven-year-old kid of you want to. 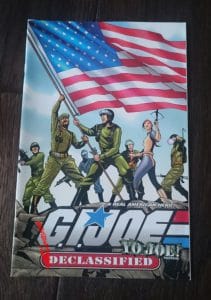 Also included was a menu card listing the contents with a little blurb about each. One of the more impressive and information-heavy menus I’ve seen. Admittedly the printing wasn’t great quality, but it was printed an good stiff paper which have it a quality feel.
It also listed the values of each item in HK and US dollars. 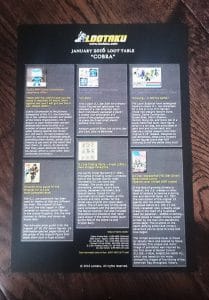 The box was lined with bubblewrap, which was totally fine as there was nothing remotely fragile in there. 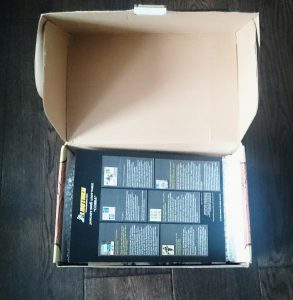 The contents were nicely varied, stuff to play with/put on your shelf and stuff to read.

ITEM VALUES
The HKD and USD are listed on the box menu. The price in GBP (£) is what I have found listed in my google searches. I’ve rounded or averaged the prices in some cases.

*This does not appear to be easily available in the UK, if at all. So for UK fans that’s pretty damn exclusive and would probably up the UK value considerably.
** As above, though it’s very easy to find in the US, is now heavily discounted on several sites, and being paper, would be cheap to acquire.
*** I can’t find these retail, but again, they’re not a rare thing.
**** I’m just guessing now, because I can’t find this retail either.
They estimate the total value of the box at $597 HKD/$77 USD. My approximation came up as £49.
The actual cost (for one month) is $380 HKD, which converts to around £33.50.
So far, so good.
However, this doesn’t include shipping unless you’re in HK. In order to find out the UK shipping rate I had to set up an account. This did not please me, however I have an email address I use for stuff like this so my regular inbox doesn’t get filled with crap.
So as it turns out UK shipping is $145 HKD which is nearly £13.

Suddenly those totals don’t look so great. The box plus shipping around pretty much the same price and the value of the contents; the contents have a slight edge but only a couple of quid.

Overall I would have to say the overall value is not particularly good for those in the UK. I did try to find out shipping for the US, but I couldn’t as it kept saying I was using an invalid zip code (I wasn’t).

CONCLUSIONApparently Lootaku varies their themes, sometimes general, sometimes specific. November's was 'One Piece X Naruto'.They've also had 'Super and 'Classic and Retro Gaming'.As to this theme, it's a little specific for my taste. I think a theme is a great idea, with different items tying into an overarching theme such as 'Villains' or 'Arcade Games' or 'Spies' or 'Combat' or 'Cool Women'. But focusing on one character means you have to be really into it to fully appreciate it, and personally, I'm not the greatest G.I.Joe fan. One thing would be fine, but I don't want a whole boxful! Oh, and in the UK G.I.Joe is called Action Man (so lame). I'm familiar with G.I.Joe because I'm Anglo-American, but I'll bet a fair few British geeks would be saying 'huh' at this one. And again, you need you be a proper fan of the character to really appreciate all this. Loot Crate is a great example of getting themes right. And they have the special limited edition boxes for the specific fan stuff, so if you're crazy about a particular thing you can indulge. (OMG their Star Wars Special Edition Crate was a thing of beauty.)So, I would say if you happen to be a fan of the current theme then that's fine. The value isn't great, so I probably wouldn't recommend it on that basis. If this was my own subscription I'd be very disappointed with this box, simply because it's so limited. Within the theme the contents are great, as I said above there's stuff to play with and stuff to read. But it's really reliant on the person opening it being a fan. Maybe I'm in the minority, and everyone else has gone nuts for this one and I'm the only one who didn't like it. Though my husband, who loves all things geeky, was not impressed, not least because G.I.Joe had no resonance for him at all (he's British). OK, two of us aren't going nuts. And this has been sent to me for review so I've not even had to pay for it and yet I'm still not pleased. Incidentally, I do feel a little bad about being so negative. The contents are well thought out, though there's no getting away from the value thing. If I'd been sent a different box it could have had a very different reception (though not the Manga one, I don't like Manga). I will say again that their actual box is awesome, just a brilliant design. Top marks for that.