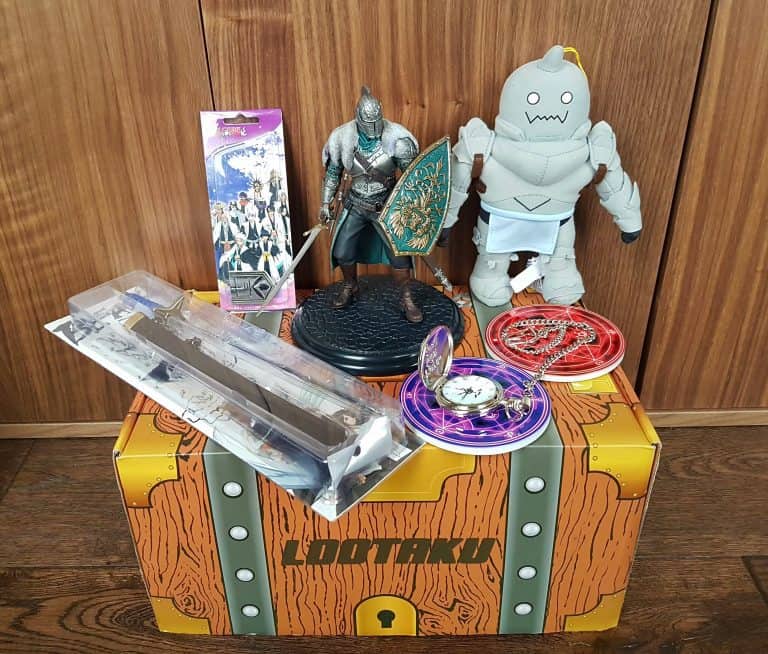 I’ve been missing my monthly Lootaku box because there was no January box. This was because Chinese New Year in January kind of shuts everything down for a couple weeks, and as they had been getting kind of close to the wire with delivery times it meant they could take an extra few weeks to reset, as it were. But now it’s back, yippee! And they’ve started back in with a bang.

This month’s theme is ‘DEATH’. Not a box full of skulls, weapons, and mysterious bottles marked ‘Poison’, but the items are all from death-related series. And, excitingly, this month’s box contain’s Lootaku’s first ever exclusive item. More details will follow!

First of all, the box. 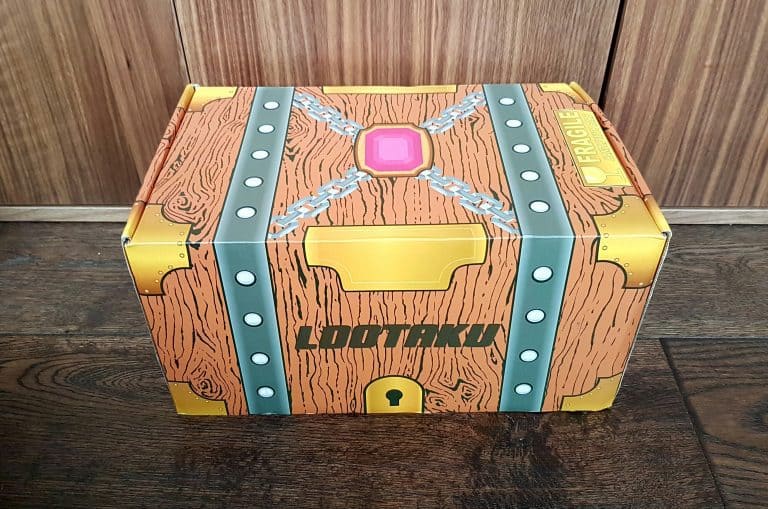 It’s been redesigned a little, and now looks even more fun. They’ve added those cool chains with the jewel, made the corners and ‘straps’ more detailed, printed ‘fragile’ on the box rather than just adding a sticker, and put the full Lootaku logo on the front. I love it, it looks so much better than before. It might not be considered a big deal, but I think the outside presentation of a box is really important, and Lootaku is tip top for design.

And we open it up… 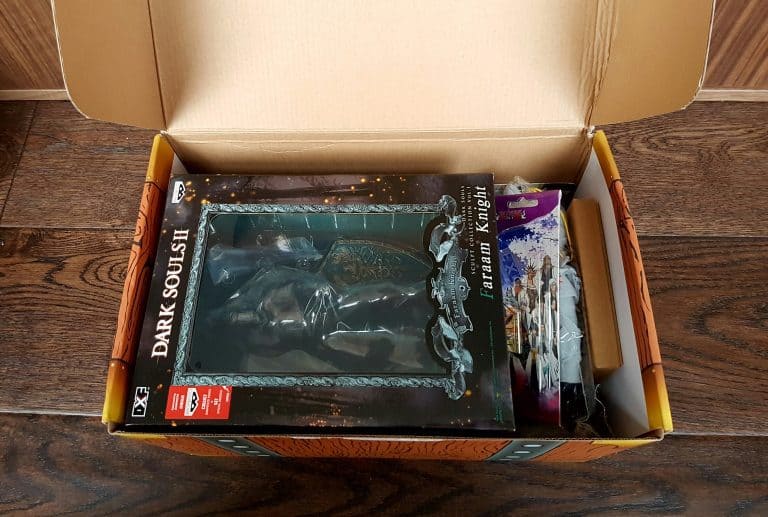 Well, I can tell you now that the biggest item is going to be the thing that my husband immediately grabs. He is a massive, massive Dark Souls fan, and he is going to be thrilled to have something from that universe to croon over like Snuggly the Crow. I was going to leave it to last, but it’s right there at the top and it would be daft to ignore it. So here it is:

OK, it’s not a brilliant picture (I forgot to take an individual picture when I put it all together for the final picture before lovingly packing everything up for my husband to have the fun of unpacking everything again) but I can tell you this figure is awesome. You can see it properly in the main picture of the box contents. The shield, sword, scabbard, stand, and dagger are separate and have to be attached individually, but the final effect is fantastic. It’s one of these great, incredibly detailed figurines, with a proper weight to it. Needless to  say, it’s made by Banpresto, who make superb figurines. Not only is it a great figure,but the clever people at Lootaku have gotten their hands on it several months before it actually goes on sale. It’s not yet available instore, and most pre-orders are for July. So collectors are way ahead of the curve on this one. Beautiful.

Next up we move onto three items from the incredible Japanese manga series Fullmetal Alchemist. If you’re not that familiar with it, the link with the Death theme is from the two protagonist brothers’ search for the Philosopher’s Stone to resurrect their dead mother. It contains an awful lot of death, transmutation, and homunculi. If you want to know more, you can buy the books (65 million copies sold so far) or catch the animated series on Netflix. 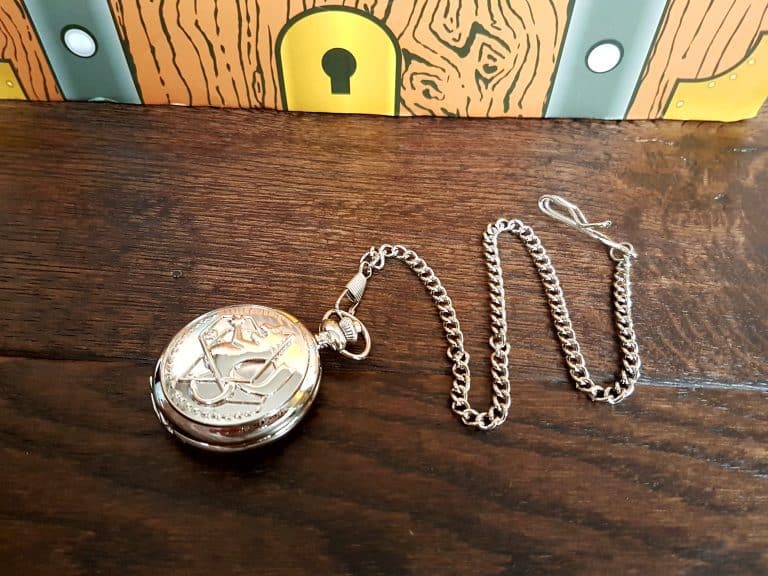 This lovely thing is a proper working pocket watch. It’s a replica of Edward Elric’s own pocket watch, and inscribed with the words ‘Don’t Forget 3.Oct.11’. This is the day the brothers began their journey in search of the Philosopher’s Stone. 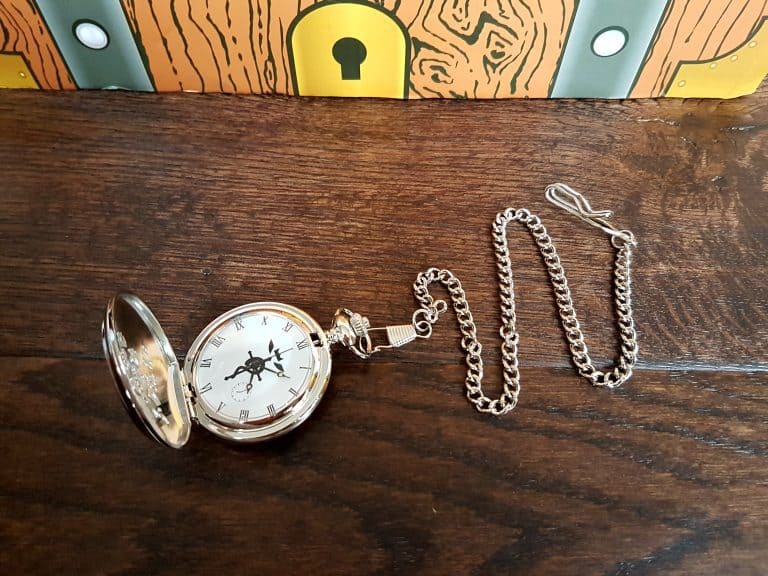 What a beautiful thing this is. It’s both decorative and practical (as it really works) and a really unusual fan novelty item. I don’t mean ‘novelty’ in the ‘cheap bit of plastic’ way, just that it’s a nice change from your standard figurine. Not that there’s anything wrong with a figurine, but this is certainly something special. And for those who are into the dapper look, I think a pocket watch is a great way to wear your fandom without being too obvious. Of course it would also be excellent for cosplay. 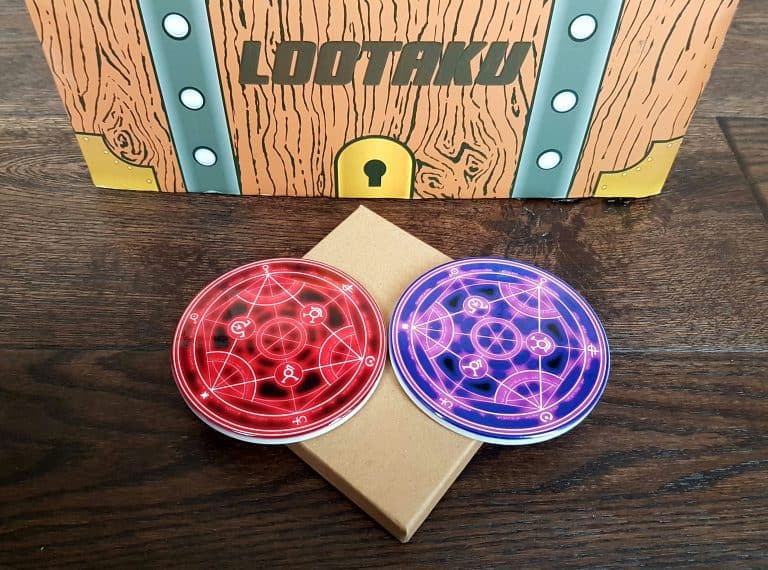 These are the Lootaku exclusive items I mentioned, and they are really very nice. They are a set of two ceramic coasters (no crappy laminated pressed card) with a nonslip cork backing. The pattern is a replica of the human transmutation circle used by the Elric brothers right at the start of the series when they are trying to bring their mother back to life. Perhaps not the cheeriest of subjects, but the design is beautiful, the quality is top-notch, and you don’t need to know what they actually are to appreciate them as a really attractive and practical item for your home. 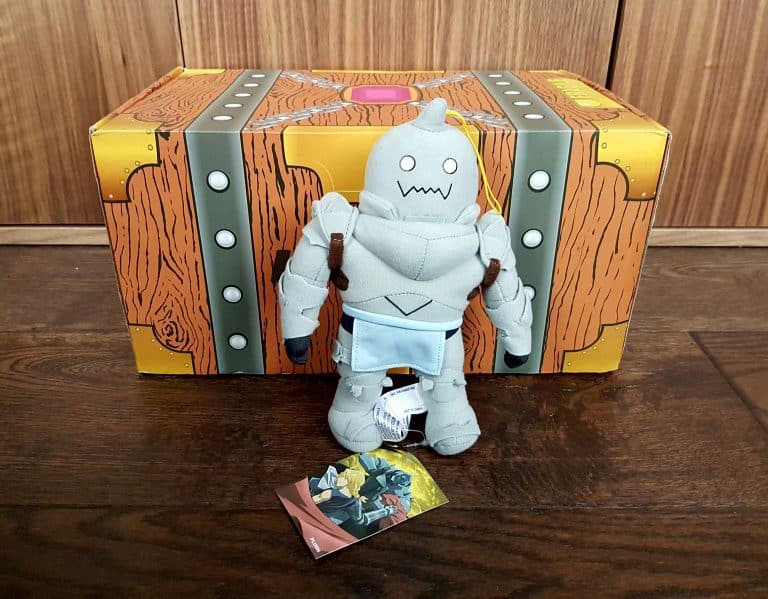 Plushie time. This little dude is Alphonse Elric, the brother who only exists as a soul alchemically bound to a large suit of armor. It never fails to amaze me how the plushie form can transform the most dramatic/sinister/tragic figure into cuteness. Look at his funny little crooked smile. (Though nothing beats my gorgeous Iron Man plushie.)

The final theme is the Japanese manga series Bleach. Another death-related story, Bleach is about a teenager who can see ghosts (I’ll resist the temptation to make a Sixth Sense crack) and who acquires powers forcing him to take on the duties of defending humans from evil spirits and guiding departed souls to the afterlife, and set him on journeys to various ghostly realms of existence. (OK, I nicked that last bit from Wikipedia. But it’s relevant to illustrate the death theme.) Incidentally, Bleach is a huge franchise, with comics, TV series, books, games, and movies, plus a ton of merchandise. There are even musicals. Major stuff.

This is an impressively heavy and detailed replica of the zanpakuto, the main weapon wielded by  Tōshirō Hitsugaya, who is one of the main Soul Reapers in the series. He’s considered a huge breakout character. If you didn’t want to simply display this sword (it’s pretty big), it would make an epic letter-opener. 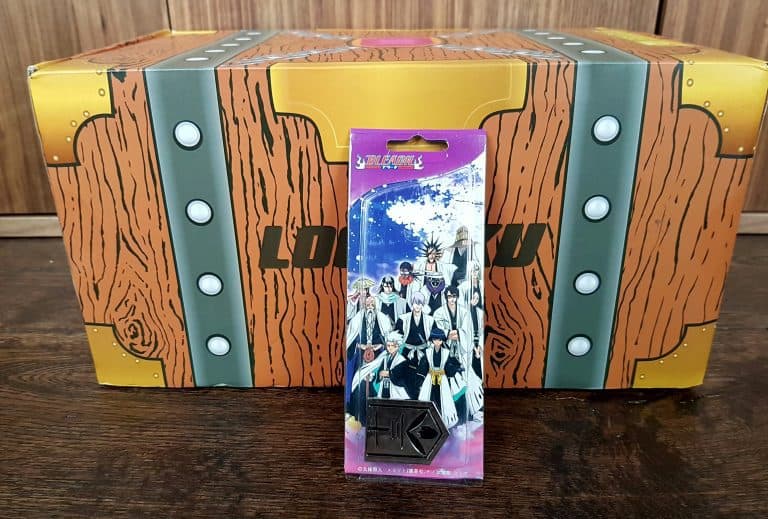 A Bleach pin. This is the symbol of the 13th Division, and the symbol means ‘Hope’. Which is good, we all need to have a little hope in our lives. Again, a nice discreet item that would look great on a jacket or bag, with just the right amount of fandom without being uber-geeky. Or more cosplay.

Here, for your edification, is the menu card. I should say that the Lootaku cards are great quality and properly informative. They also contain their estimate of the value of the contents. And as I always point out, they are put at the bottom of the box, so no spoilers.

As my loyal readers will know, for Lootaku boxes I try to find the £ values/costs of each item, and add them to the £ cost of the box itself. I use an online currency converter so they’re correct at time of writing. I can’t always take into account shipping costs of individual items, but I do my best to be fair. Often I can find things on Amazon, but some of the items in Lootaku boxes are nigh on impossible to source in the UK, so sometimes I have to guesstimate. I also don’t use eBay as reference, as I find prices are not reliable or realistic.

Prices and values on the Lootaku website are given US dollars. A one month subscription is $44.99 (three and six month subscriptions are cheaper). According to my currency converter this is £36.12. Shipping is $17.66 (£14.18). Slightly pricey, but it’s coming a long way.

I should also add here that Lootaku have actually managed to reduce their prices, both for subscriptions and shipping for 2017, and while it is somewhat at the mercy of the current exchange rate, given the quality of their stuff this is incredibly impressive.

So let’s talk turkey. Here are the values I’ve managed to find:

I found this on a French site for €32.90, but not only could I not find shipping costs (it wasn’t free shipping) you had to buy a minimum of six figures! Not entirely practical then.

I found this on Amazon, from a third party seller. There are quite a few similar watches out there, but this was the only one I could find that looked identical.

This is the first time I’ve used the Lootaku own value ($14). These are exclusive items, so just this once I’ll take their word for it. Plus I couldn’t find any kind of equivalent, not even on Etsy.

This was on Amazon (Prime), which was the only place I could find this plushie in the UK. I think this price is kind of steep, but it’s possible it’s imported, with all the extra costs this would imply.

Once again I’ve had to use the Lootaku estimate, because I can’t find this thing anywhere.

This was tricky. I couldn’t find this individual pin anywhere, but I found the full set of thirteen on an American site. I divided the total by 13, which gave the individual price, but I included shipping costs. And bear in mind that technically you couldn’t buy just this one, you would have to buy the whole set, which would cost you over twenty quid.

Well, my goodness. That’s a serious value bump. Even if you take into account that the price of the plushie is exceptionally high, this is incredible value.

As I’ve said repeatedly, Lootaku really does top-quality stuff. The items are thoughtfully chosen, and as they are based in Hong Kong, they have an awful lot of Asia-exclusive items, which is fantastic for Western collectors. Yes, this is certainly one of the more expensive geeky loot subscription boxes, but it is absolutely top of the line. There is never any filler, such as freebie plastic crap. They have a great selection of different items, and this particular box is exceptionally well-thought-out. I love the combination of an (obligatory) figurine, fun plushie, a couple of replica/cosplay items, practical items, and a really neat exclusive. I do hope Lootaku can carry on including the odd exclusive, because they’ve started off great!

When my husband saw the Dark Souls figurine he made the same kind of sound he makes when he sees a really good rare steak. Apparently it’s his favourite thing I’ve ever received, and it’s definitely disappearing into his personal collection.

Lootaku is geared mostly towards manga and anime, but if that’s your thing you can’t find a better box. And they do mix up their themes (yes, that amazing Harry Potter box, I’m never going to stop mentioning that one) so you get an incredibly interesting variety of items through the year.  It’s clear that they are incredibly passionate about finding the really good collectible stuff.