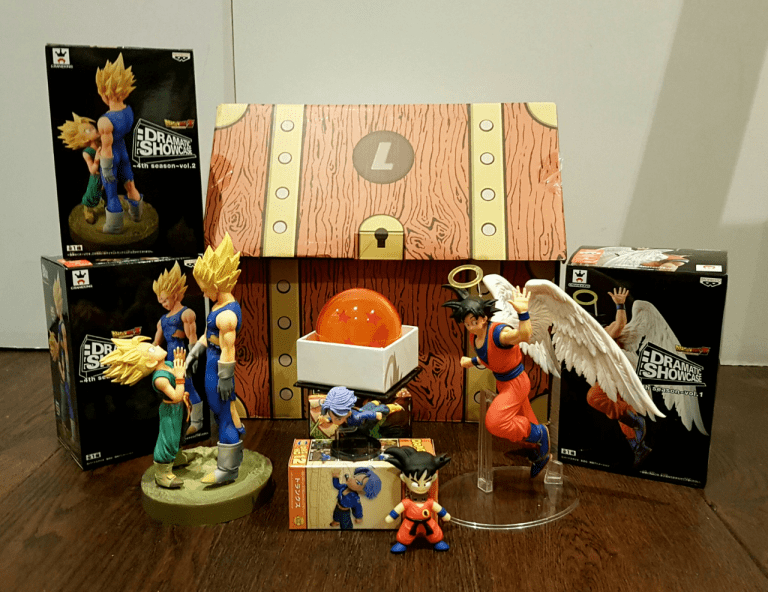 So here we go with another Lootaku box! Just so you know, Lootaku (www.lootaku.com) is a Hong Kong based subscription box company specializing in cool geeky things. I’ve found they’re quite keen on anime and manga stuff, though not exclusively (I’m still drooling over their incredible Harry Potter box back in October). Here is their blurb:

Lootaku is a premium monthly subscription based service to fulfill everybody’s geeky addictions. We are fellow geeks that play video games, watch anime/cartoons, tv shows, collect figurines, and everything else that usual geeks love. Every month we source cool collectible items and deliver them straight to your door. Anything can be inside if we think it’s cool enough! Just remember that we don’t put anything inside that we wouldn’t want ourselves. Technically we’re just shopping for ourselves and letting you guys tag along.

Back in July Lootaku brought out what turned out to be Part 1 of their Dragon Ball 30th Anniversary box series, and here in December out comes Part 2.

As I said in my Part 1 review, Dragon Ball isn’t close to my heart; anime isn’t really my thing, though I can totally appreciate a good subscription box even if I’m not into the theme. And as a rule Lootaku is pretty damn good.

By the way, I must apologise for the pictures. I always shoot in natural light, but recently with the long nights I’ve not actually been at home during daylight, so some of these shots are not as good as I would like.

Now I’ll start the actual review. As always, the box is cool. 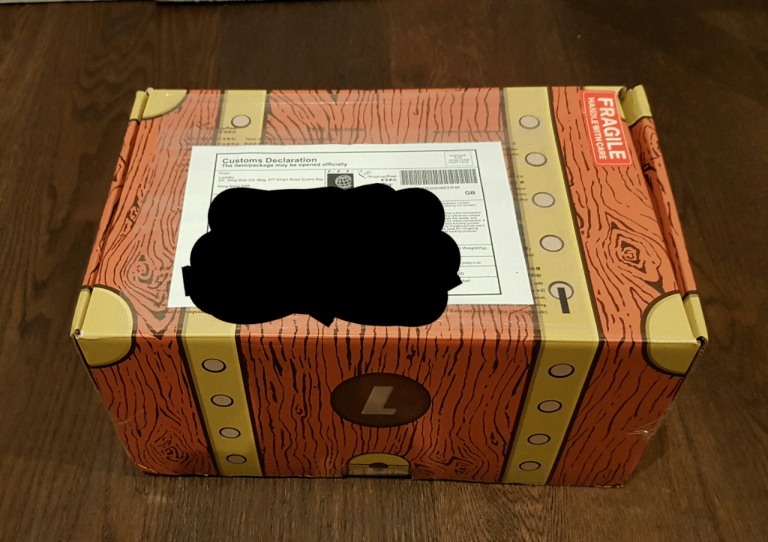 Look at that cute treasure chest. And everything is always packed so well, it comes a long way and there’s never been any sign of damage to anything, inside or out. This one was kind of heavy. By the way, I never know what the theme is until I open the box, so it’s all a lovely surprise. I really like that. 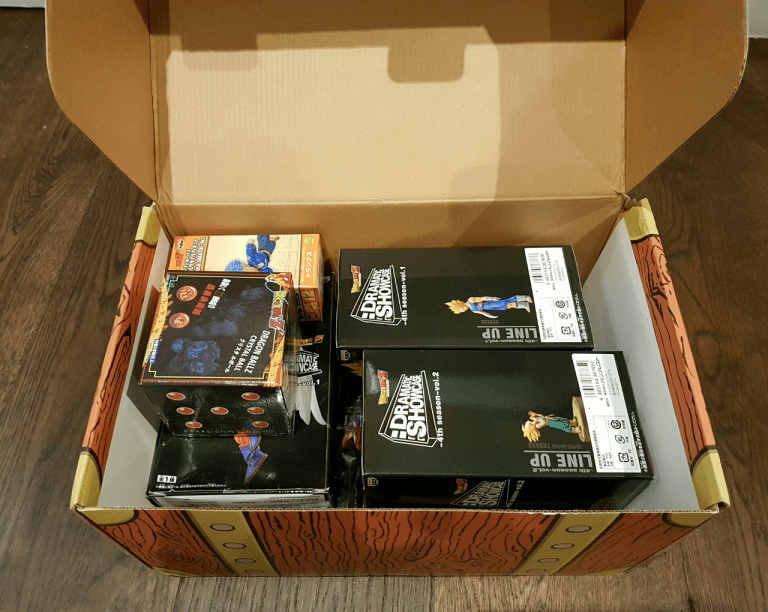 Oooh, lots of boxes. So the first thing out was really heavy. And it’s pretty awesome. 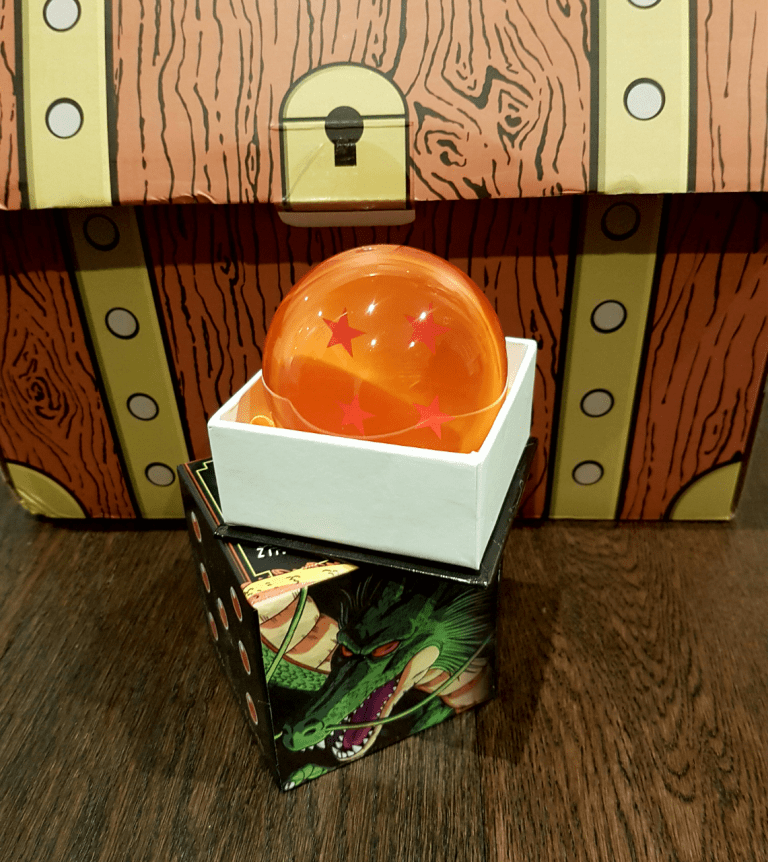 That, my friends, is a 4 star 7.5cm Dragon Ball Replica. It’s fab, and really heavy. You could throw it and do some serious damage. Though please don’t, it’s acrylic and fairly sturdy but it’s for looking at admiringly, not for playing catch. According to the menu card (which is always at the bottom of the box and I never look at until I’ve unpacked everything) this was originally put in their October 2015 box, but they had so many requests to bring it back that they decided to repeat it. And even better, those subscribers who would have already have had one from the original box were given something different so they didn’t get two. Really thoughtful. 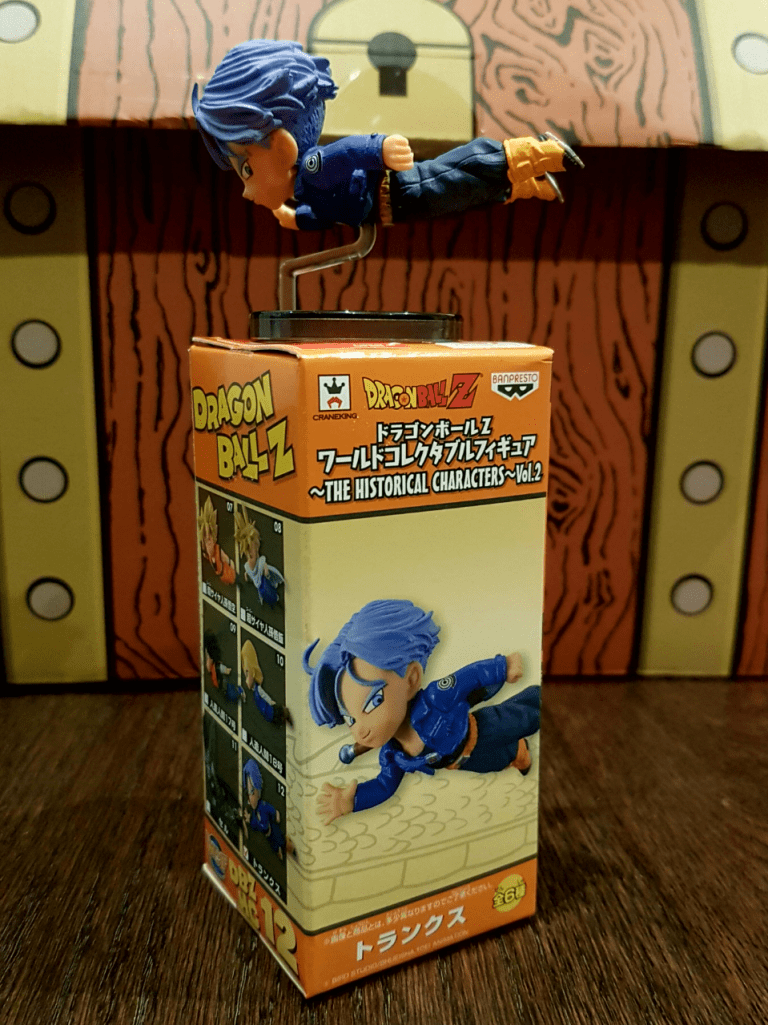 This is a dinky one, but looks amazing. It’s a collectible Banpresto figurine from the Dragon Ball Super World Collectible range. You could receive one of a possible twelve. This gravity-defying guy is Future Trunks.

On to the big boxes: 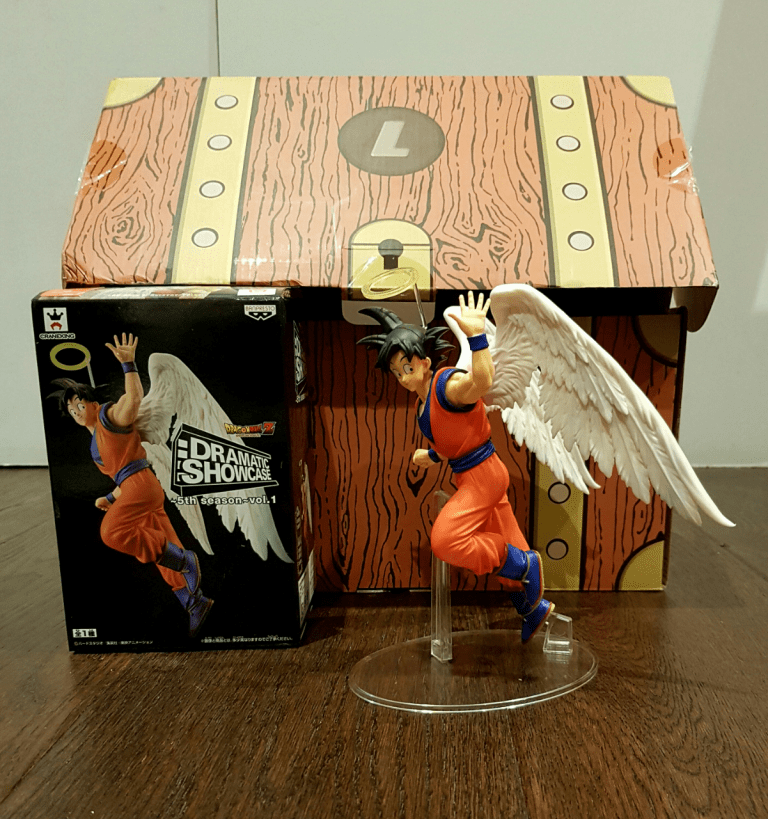 This is a Bandai figure from the Dramatic Showcase collection, released in Japan in December, and it’s Goku, as seen in the original ending credits of the Buu Saga series. I’m always impressed with the engineering of these figures. And their weight, they are seriously well made.

Now then, on occasion Lootaku do an random upgrade for their boxes, so some subscribers get something extra or a bit different. So in some of the other boxes was a figure of Mr Satan from Resolution of Soldiers Vol. 3. In the box I got was an alternative, which is actually two figurines which can be put onto one base and made into one scene. From the the Dramatic Showcase 4th season are Volumes 1 and 2 showing Trunks and Majin Vegeta in a famously touching scene. 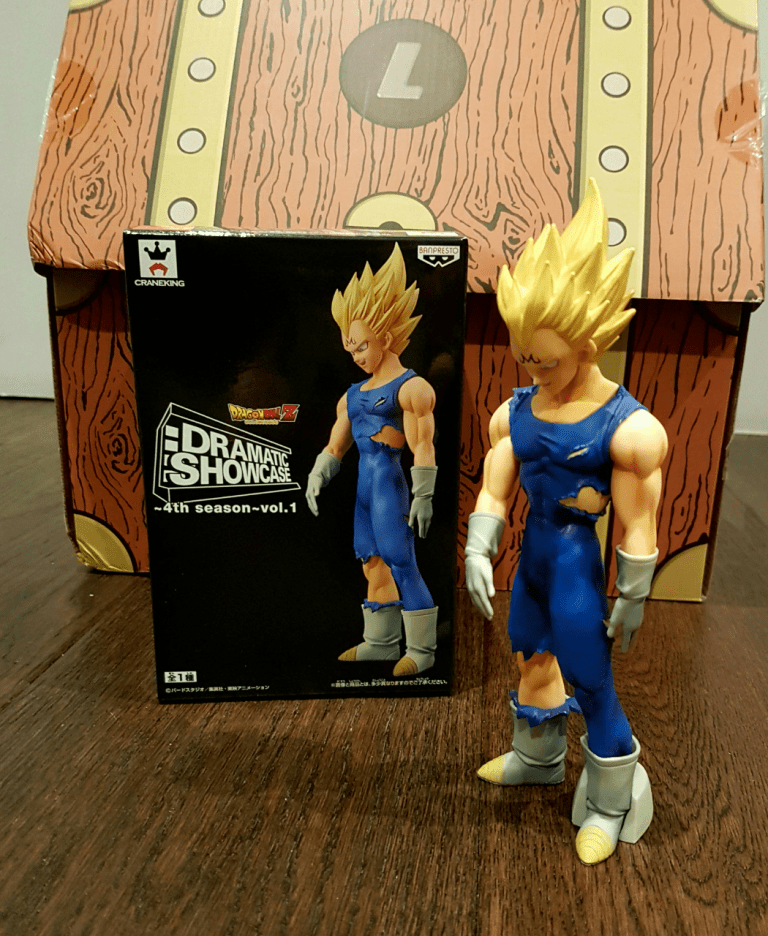 And then comes the other, plus the combined base:

And now what have we here? Something that I didn’t see at the bottom of the box? 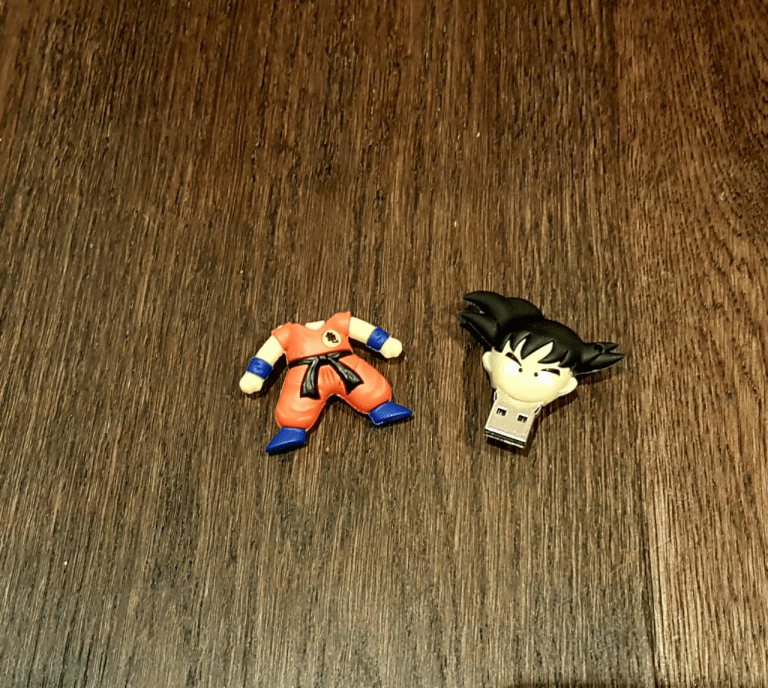 And for the hell of it, here’s the menu: 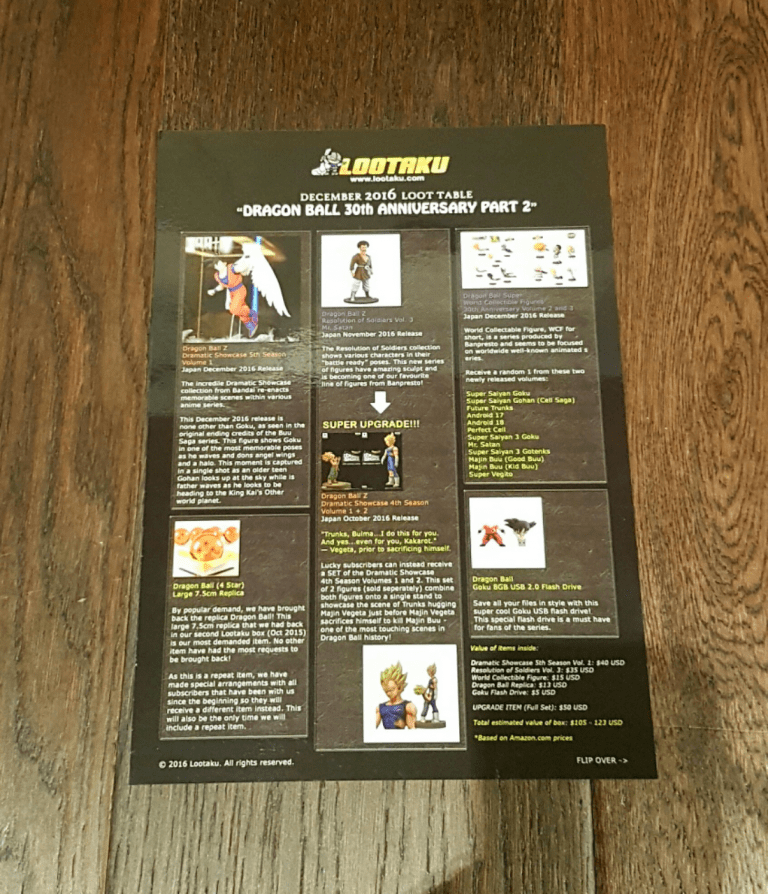 Anyway, as all you avid readers of my reviews know, I try to find the £ values/costs of each item, and add them to the £ cost of the box itself. I use an online currency converter so they’re correct at time of writing. I can’t always take into account shipping costs of individual items, but I do my best to be fair. Often I can find things on Amazon, but some of the items in Lootaku boxes are nigh on impossible to source in the UK, so sometimes I have to guesstimate. I also don’t use eBay as reference, as I find prices are not reliable or realistic.

Prices and values on the Lootaku website and the menu card are given in US dollars. A one month subscription is $44.99 (three and six month subscriptions are cheaper). According to my currency converter this is £36.63. Shipping is £14.38 at current exchange rates ($17.66). Kind of pricey, but it’s coming from a long way away.

The only place I could find the exact one was on Amazon.com. There are many which are slightly smaller, but the one in the box is the genuine 7.5 cm size.

I could not find a trace of this in the UK, and shopping searches led me to sites in languages I can’t read. So I’m making a wild guess here. It’s possible that as it’s clearly very hard to find in the UK it would be worth a lot more, but little figures like this tend to be around a fiver under normal circumstances, so that’s what I’m putting.

Just so you know, this is very difficult to find. This is the lowest price I could find, from a US store, and it’s a preorder, not available until April. Other places are much more, and that’s not including shipping or import tax.

These are almost impossible to find in the UK. The price above was from Amazon.com, but you can pick it up on Amazon.co.uk for just a shade over £95.

This is also from Amazon.com, shipped from China. It’s listed as unavailable on Amazon.co.uk.

Well, I hope you’ll agree that that’s damn good value for money. Not to mention the fact that if you actually wanted to buy all these bits separately it would involve lots of shipping and a lot of delivery time, not to mention some really ugly customs charges.

Once again, Lootaku has played a blinder. As I’ve already said, Anime is not my thing, but I’m very impressed with the contents, both in quality and in value. My one tiny gripe with Lootaku is that they do sometimes go a little heavy on the figurines, but then they are very popular in the manga and anime worlds. Plus, being in Hong Kong they clearly have incredible access to the Asian market so they can get hold of some really unusual and hard-to-find stuff for the Western market. But I do quite like other items (may I refer you back once again to the Harry Potter box), so I’m hopeful for something awesome as well as figurines next month.

This isn’t another gripe, just a note. The past couple months their boxes have been shipping out a little late. This box actually arrived at the beginning of January, though I’m sure that can in part be attributed to the Christmas postage delays. This isn’t really a big deal in my opinion, as it’s not like they’re tied to a particular month. But according to their Facebook page, they are missing out January, mostly because of Chinese New Year, when most everything shuts down for a few weeks, and also to give them a chance to catch up on delivery times. So the next shipment leaves February 15th. And I accidentally saw a sneak preview of the theme, which involves Dark Souls. My husband will be hyperventilating with excitement (he is a massive Dark Souls fan) so I’m not actually going to tell him about it until it arrives.

I digress. Anyway, their box delivery can run a little late in the month, but I don’t really care. I think it’s a hazard of receiving any kind of international subscription box. They’re also really good about keeping their Facebook page updated with shipping dates and all that.

All in all Lootaku are superb. Yes, they are more expensive than other geeky boxes, but they are definitely more high-end. I’ve never seen anything that is the kind of obvious freebie filler you get in some other subscription boxes. For example, I love Loot Crate, but more than once their boxes have contained a promotional freebie of some kind which is basically crap. All of Lootaku’s items are the real deal. And if you’re a fan of Manga/Anime this is the sine qua non of subscription boxes.

See you in February!