Reviewed by All Subscription Boxes on 11th December 2015 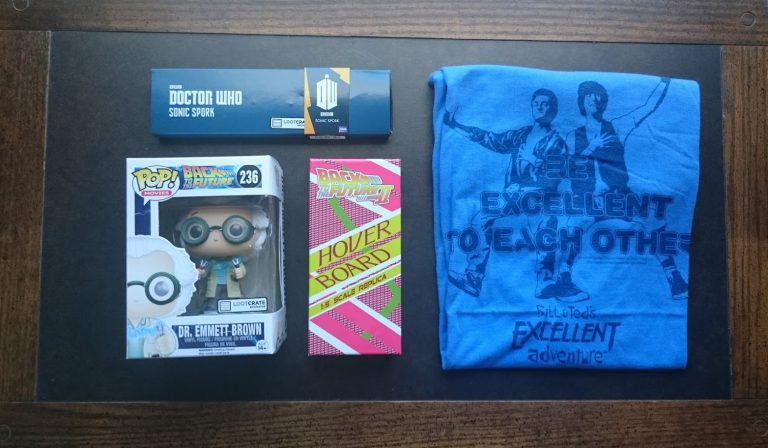 This month’s loot crate is based on time, no one has enough time so loot crate is helping you by giving you some more. It includes loot from just a few movies and tv shows, including; Back to the future, Bill and Ted and Dr. Who. With such a limited selection to choose from in this box, it may limit the appeal for some people. Fortunately though, there is a Funko Pop figure which is good in anyone’s books because no one can deny the power of the Funko. In terms of theme, everything included was on point but I wouldn’t have minded a Rick and Morty item added in. That is just a personal preference, I know it’s nowhere close to the prolific status of the other items that did make it into the crate. 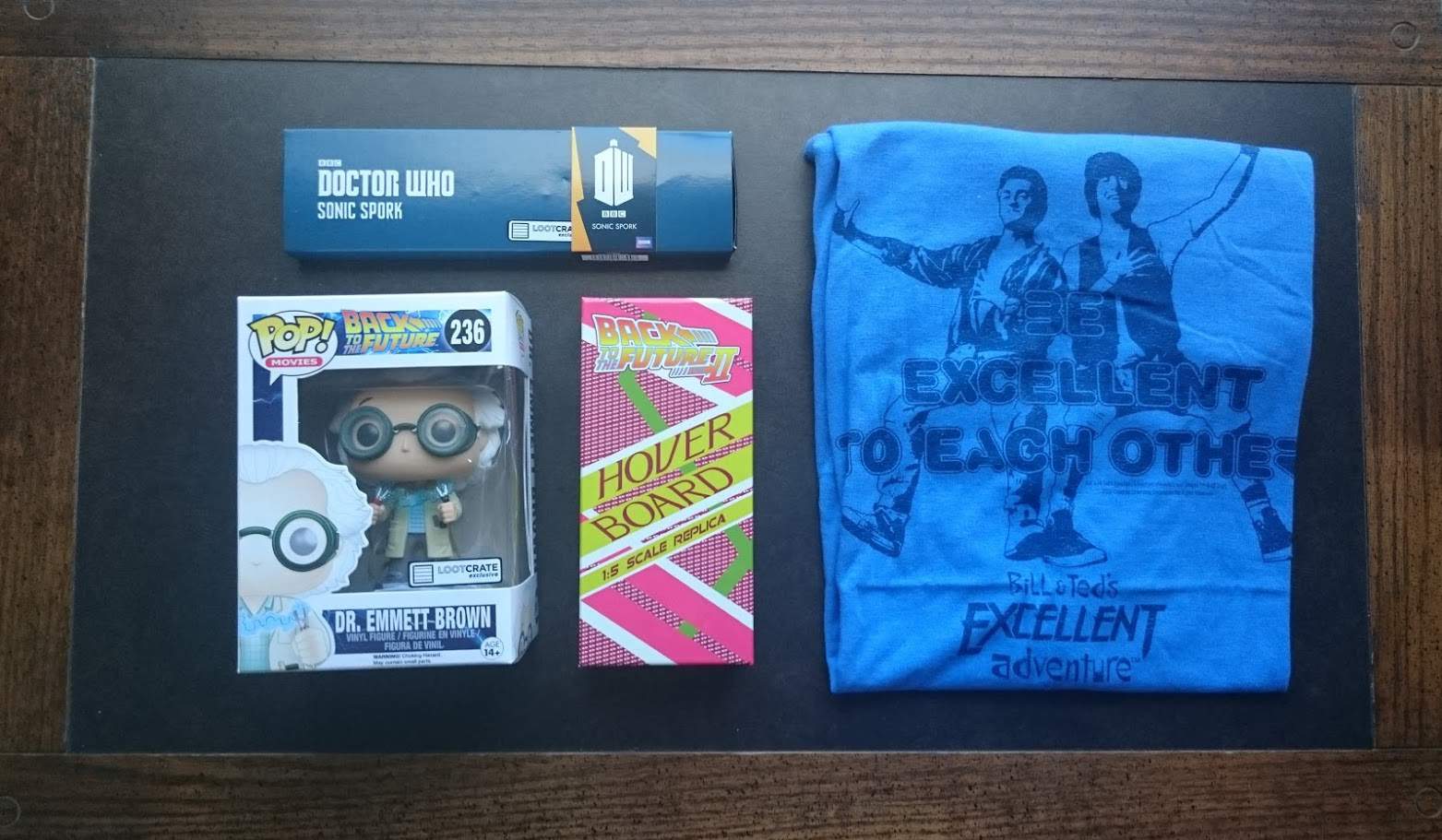 Let’s get down to business, the best item in the box was the Funko Pop figure no question. Loot Crate included a Doc Brown figure that was exclusively designed in co-operation with the loot crate curators. If you look up the Dr. Emmett Brown figure for general sale you won’t find this one, this one is just for subscribers and in my opinion this one looks way better. The design is based off of the clock tower scene in the first Back to the Future film where Doc Brown is trying to juice up the DeLorean. As for the rest of it there isn’t much to say, it’s the quality that you would expect of a Funko figure and it just looks really cool. 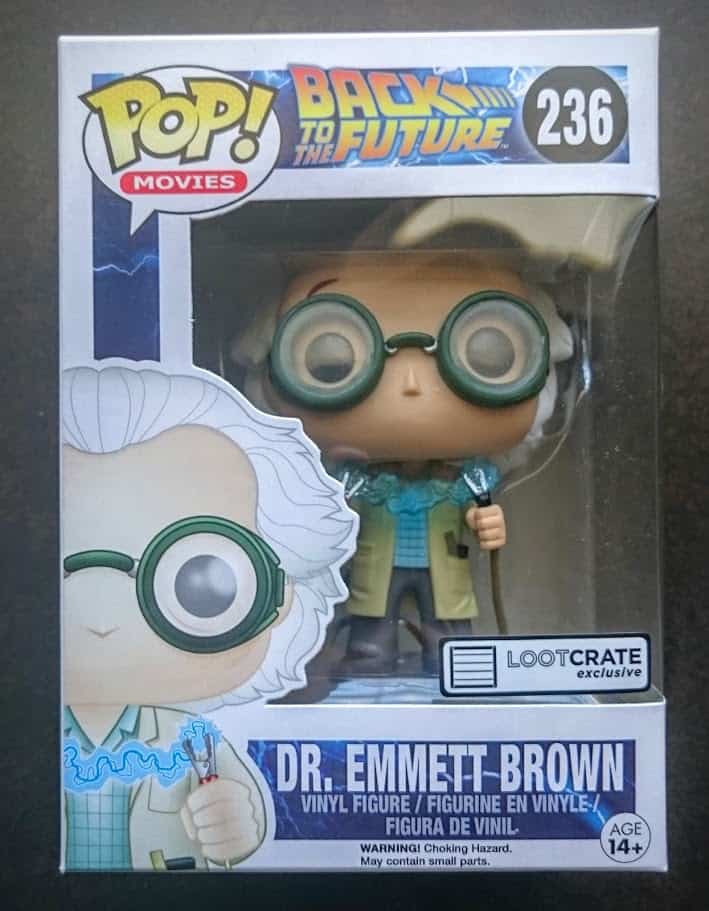 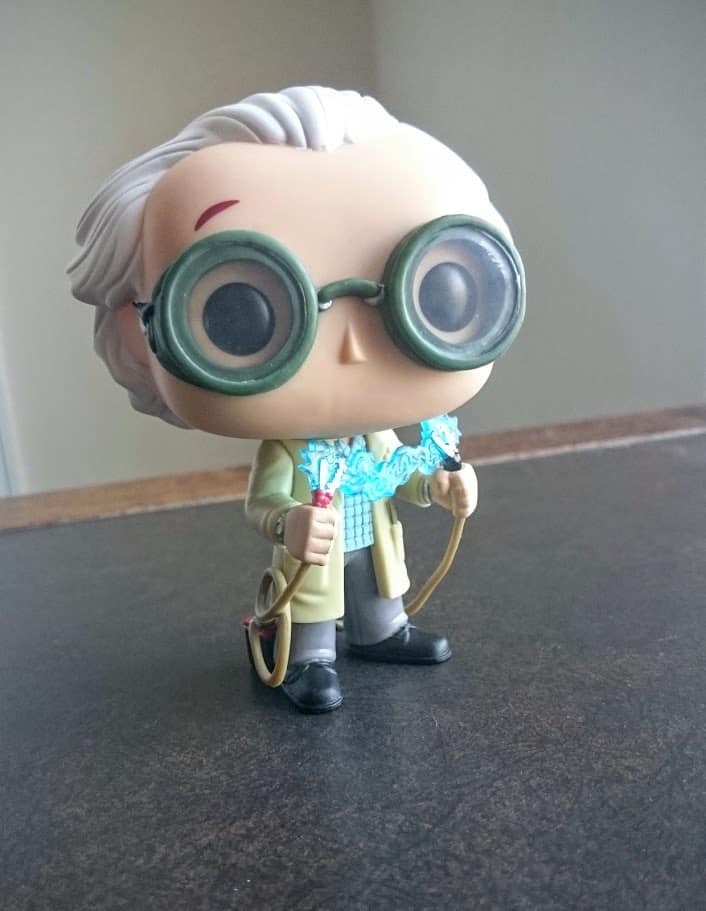 To stay on the Back to the Future track, also included in the loot crate is a 1.5 scale replica hoverboard from the famous scene where Marty McFly was ‘skating’ through the future town center. It looks exactly like the one in the film so that is a good job and it also rests on a stand above a mirror creating a hover effect. The replica is sturdy and doesn’t feel like it would break easily. It is another Loot Crate exclusive so you won’t be able to find this exact 1.5 scale replica anywhere else on the market, it was made by QMX which Loot Crate have used before for their exclusives, expect good quality from QMX. As a side note, the boxing for the replica is also great looking, with a very 80’s design it looks like it could actually be from the same era as the film. 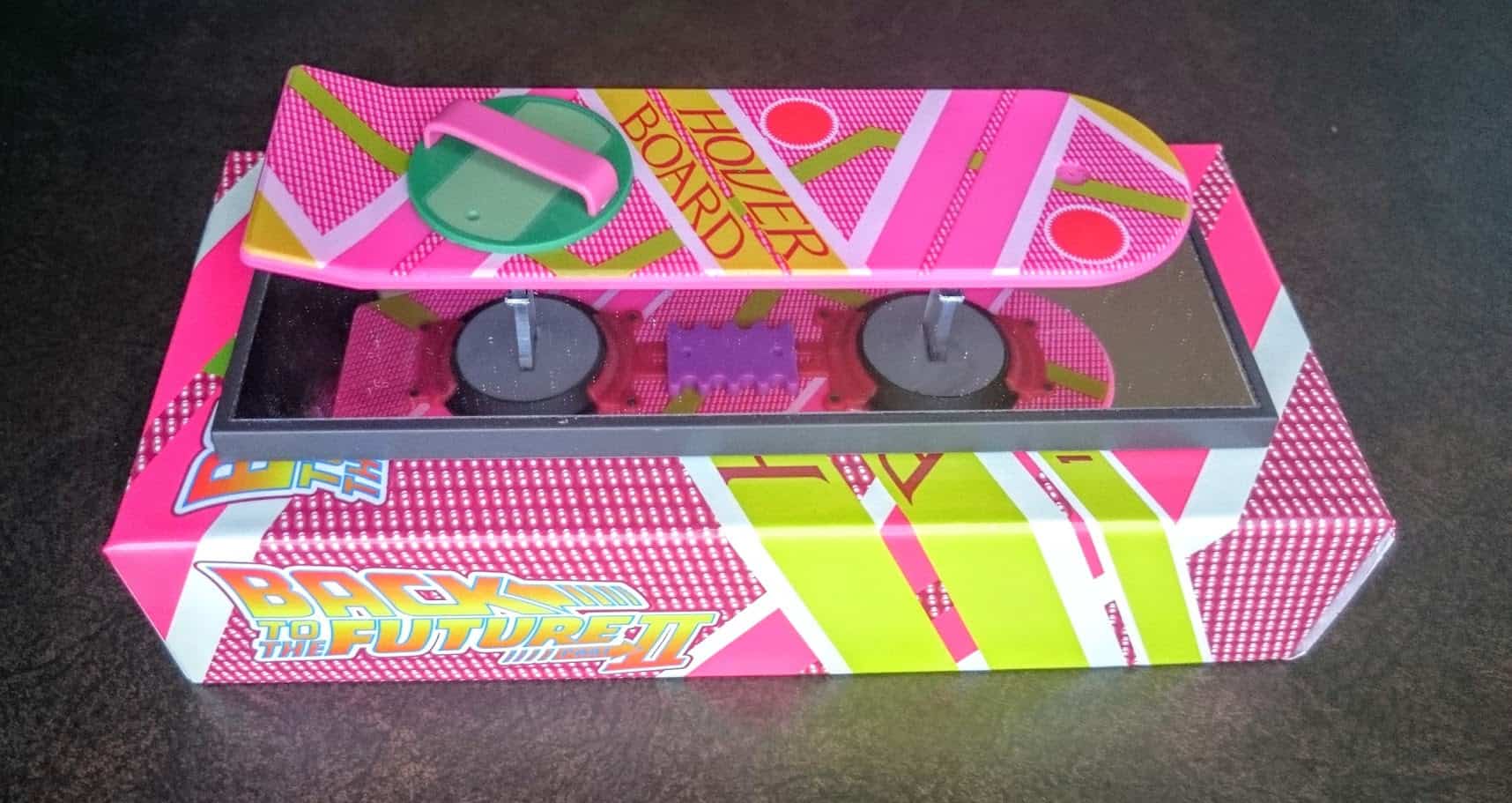 Next up there is a Dr. Who sonic spork which is a design based off of the sonic screwdriver from the show. It’s licensed by the BBC but manufactured by 50 Fifty Gifts in Hong Kong and it is also a loot crate exclusive so you won’t be able to find this anywhere else either. It has a long handle so there is plenty of grip options for eating soup or cereal or whatever else you can eat with a spoon. You could even use it for camping with it’s spoon and fork options, spork time. Although I am not sure about the quality of the handle, it feels a bit flimsy, if you apply some force it makes creaking noises which is concerning. However that is unlikely to be a problem for the majority of use cases but it is worth noting. 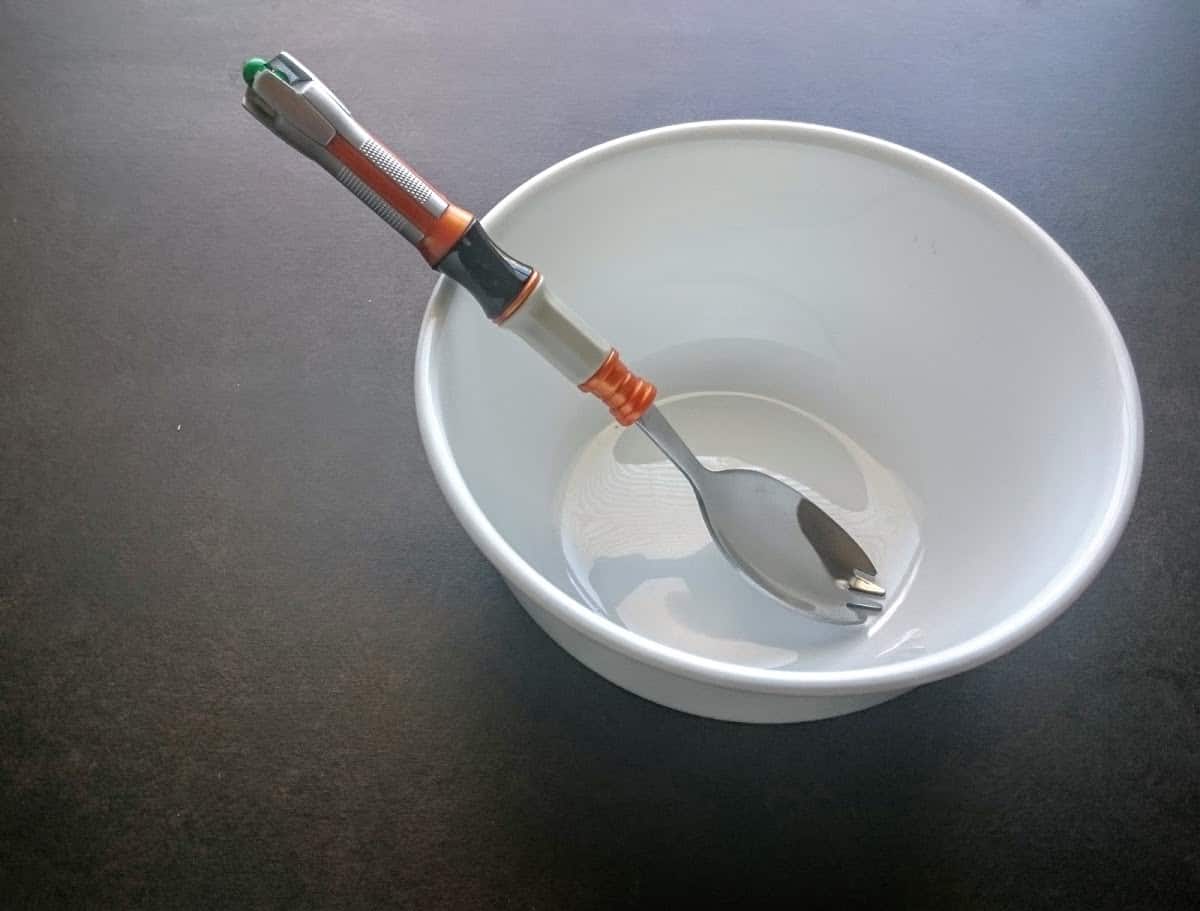 Finally the t-shirt, the much loved item because everyone loves a t-shirt. The last t-shirt that Loot Crate sent out was the Transformers/Tron shirt, it was a Gildan softstyle t-shirt but this t-shirt is just Loot Crate branded and the quality feels much lower than Gildan. It’s clearly a money saving move, GIldan is a more premium brand for t-shirts and I don’t know what this one is but it feels thinner and clearly lower in quality. The fit is also smaller than previous shirts which was kind of annoying for me, maybe some people like tight fits but I don’t. The design felt cheap as well with a number of different fonts thrown on for good measure, maybe that was supposed to be another throwback to 80’s design but it didn’t work this time, it’s not a t-shirt design that would make me want to buy it anywhere else.

Overall I really liked this month’s loot, there were limitations in terms of the films and TV shows that they covered but they did choose some pretty big ones that appeal to most people so I think they got away with it. The continuing inclusion of collectible figures was a good choice, they are my favourite items and give good value especially when they are exclusive. The replicas in the forms of the hoverboard and sonic spork were also good inclusions and felt more premium than other recent ‘sideshow’ items like the terminator keyring in the summer, the Hearthstone stress balls or any of the random game download content that they often have. These things can let me forgive the sub-par t-shirt. I just hope that they don’t continue to use lower quality t-shirts in the future.

About All Subscription Boxes