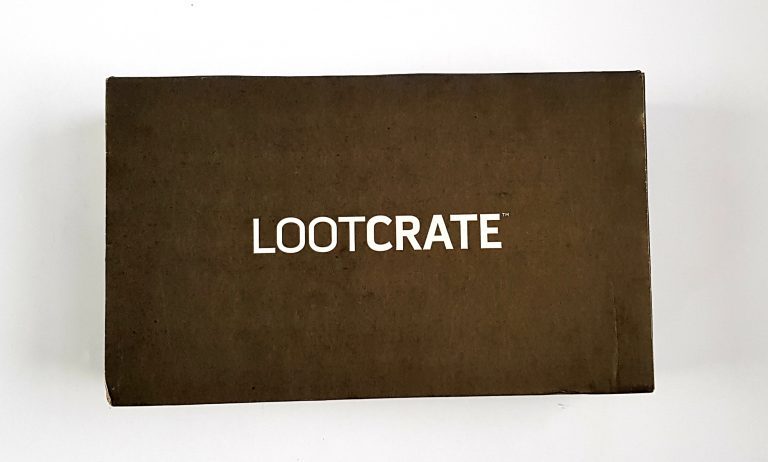 This month’s theme is DISCOVER. 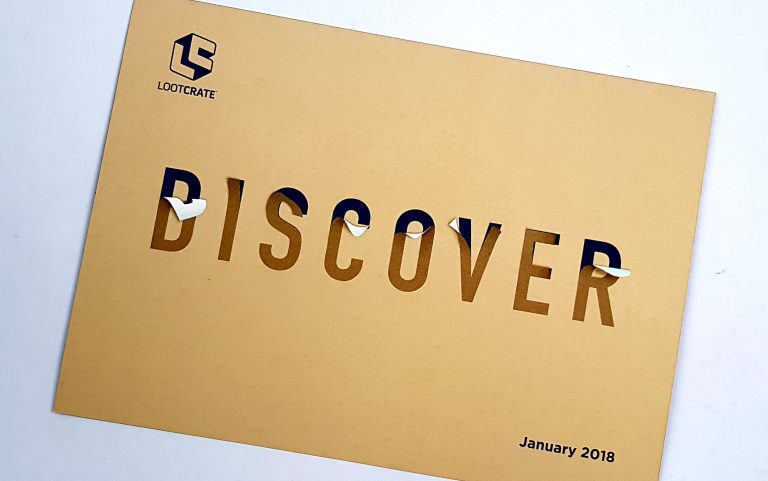 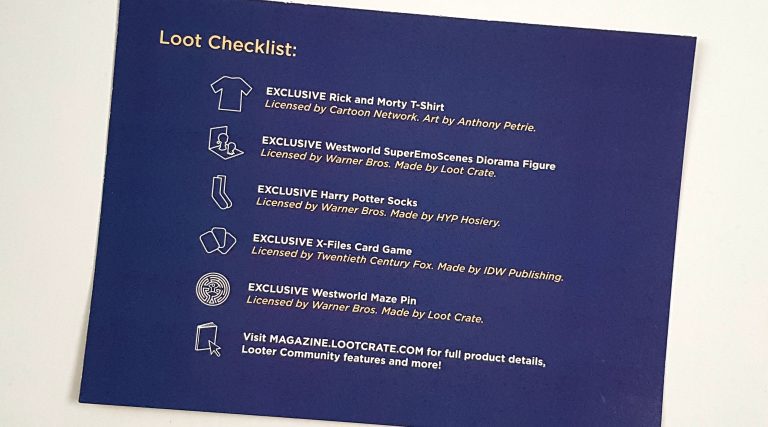 Loot Crate no longer provides a menu booklet in the box. There is a flyer with a contents list, plus a link which takes you to a virtual version of the booklet. 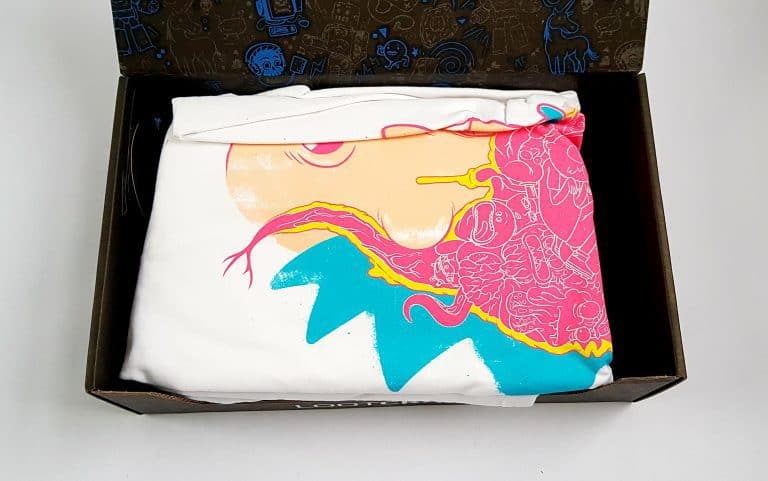 There’s some crazy bright colours there! 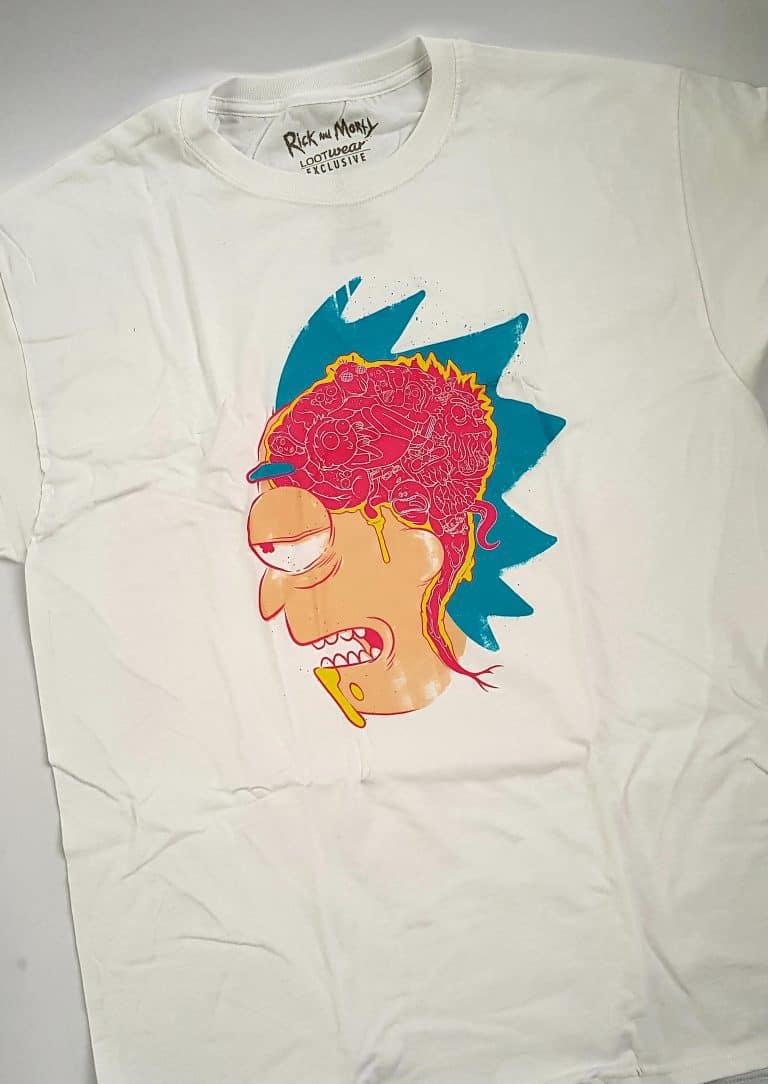 This month’s t-shirt is from the fantastic animated series Rick and Morty. The artwork shows you what’s inside Rick’s brain! 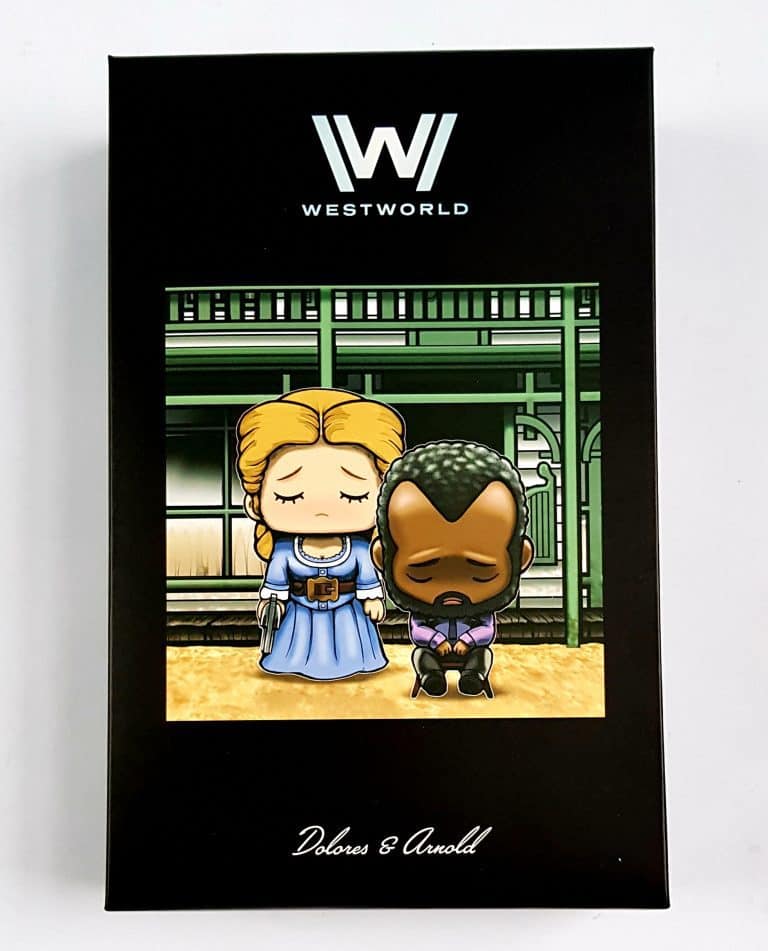 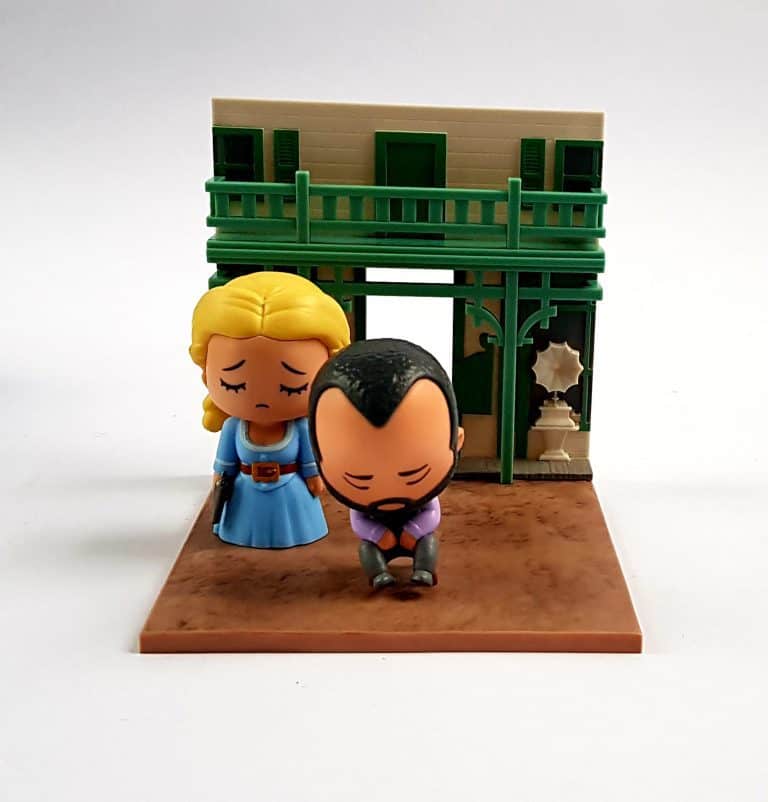 This is the second in the Loot Crate series of SuperEmoScenes, the first being in October’s Loot Crate. This one is from Westworld, and shows Delores and Bernard at a particularly emotional moment. 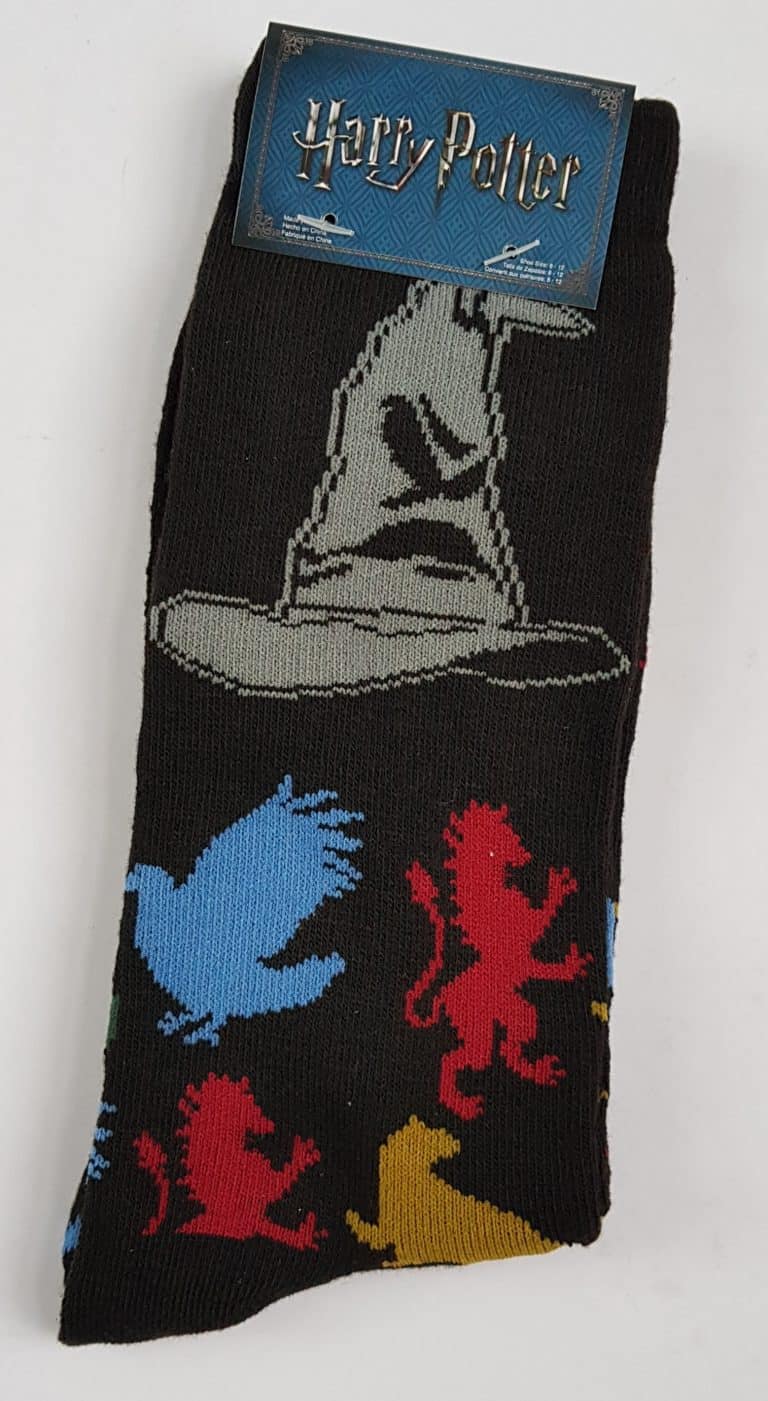 Harry Potter socks. The design shows the Sorting Hat plus the emblems of each house. 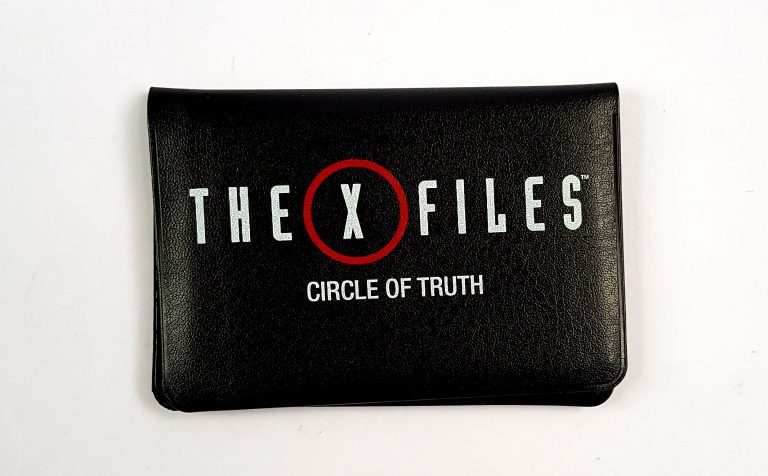 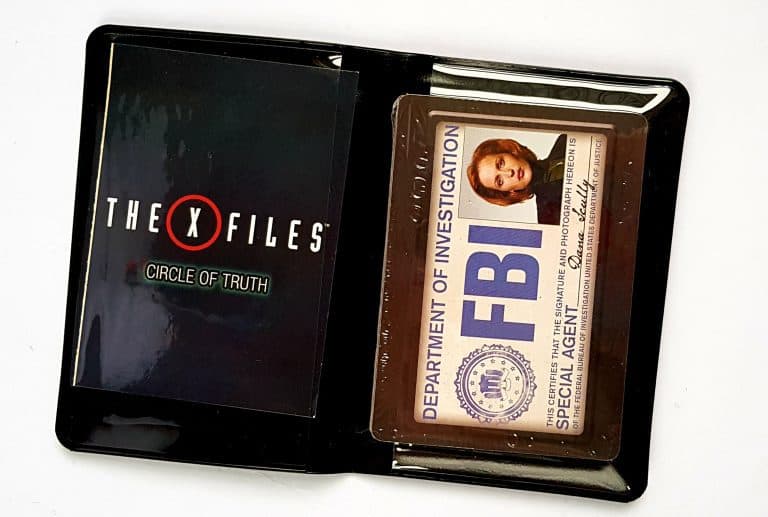 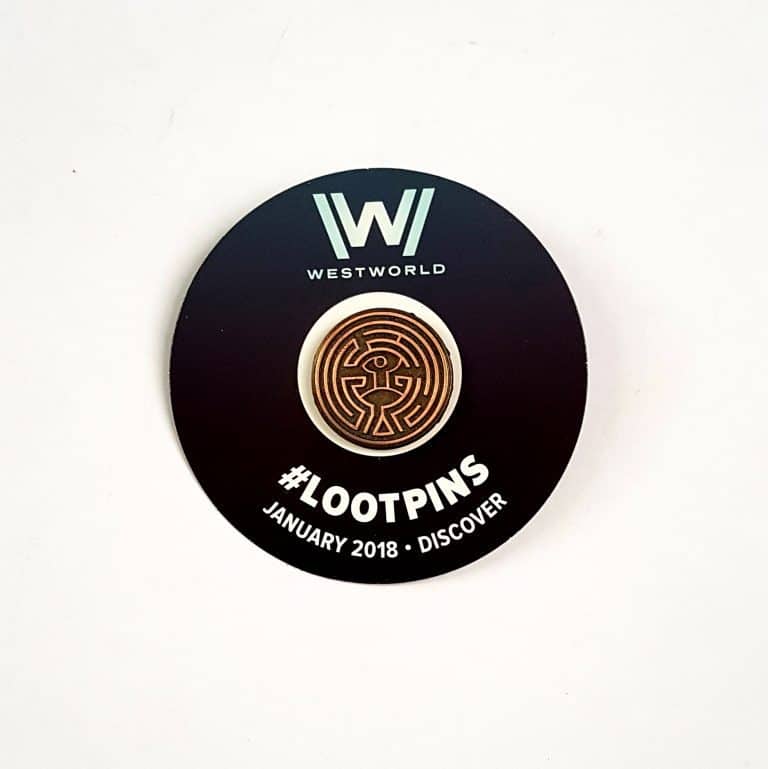 This month’s Loot Pin features the Maze Symbol from Westworld. It also unlocks extra content, including an eBook, on the Loot Crate website.

SuperEmoScene – I said £15 for the one in the October box, so I’ll say the same here.

Socks – £5. I’m being extremely generous, because the quality is not good (polyester) and the pattern is boring, plus you can get Harry Potter socks everywhere now.

Card Game – It’s fun and exclusive, but not exactly elaborate. £5.

OK, so technically you’ve got more than your  money’s worth!

I love the t-shirt! Rick and Morty is one of my favorite shows, and if you haven’t seen it I strongly suggest you do so. The illustration is very clever with lots of details, perfect for fans of the show.

I really don’t like these SuperEmoScenes. The Stranger Things one in October was good as a one-off, plus I like Stranger Things! But they are basically the exact same design style. I also don’t watch Westworld, so it doesn’t mean anything to me.

The socks are not nice at all. They’re all polyester, which is sweaty, itchy, and uncomfortable. I was so happy to see that Loot Crate had continued to do 100% cotton t-shirts, so I’m extremely disappointed these socks are such bad quality. The pattern is pretty boring too. There are tons of Harry Potter socks out there which look nicer, contain actual cotton, and are remarkably inexpensive.

The card game is actually really cool and original, and it looks like a lot of thought has gone into it. It’s a two-player game, and while I haven’t played it yet, looking at the instructions it looks like great fun! I loved watching the X-Files, as did my husband, so I’m sure we’re going to have some fun with this game!

The pin is a nice design, but again, means nothing to me because I don’t watch Westworld.

I’m really don’t like the virtual magazine. It’s not nearly such a nice experience having to get out the laptop to look at the booklet and details about the items.

I’m glad this month’s box arrived before the end of the month, because December’s only arrived ten days ago! So they’ve got the delivery sorted out.

This month is another mixed bag. Great t-shirt and great original game from two franchises I love, but two items are from a franchise that just doesn’t interest me. Even if the scene was from something I like, I don’t think I’d like it that much, they all just look to same-y. And as for the socks, total filler item. I love Harry Potter, but not these socks. At least I’m going to have fun playing the game!