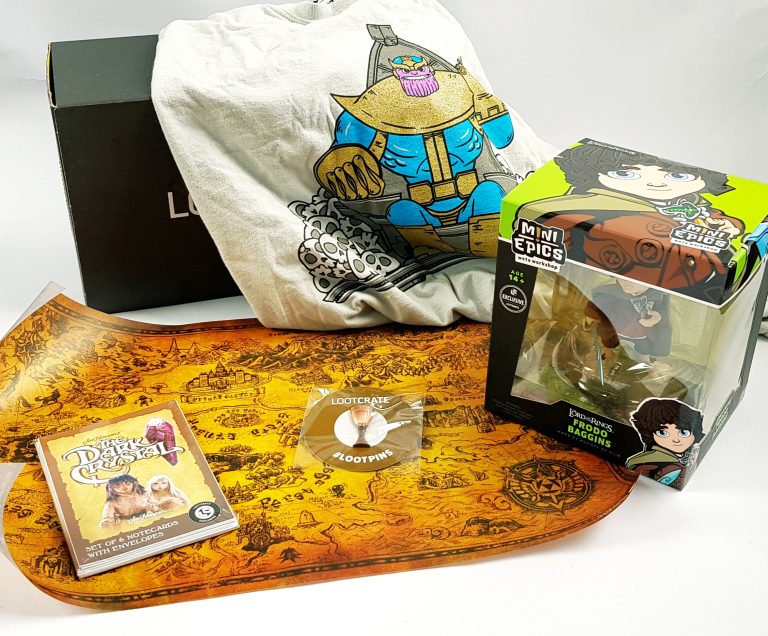 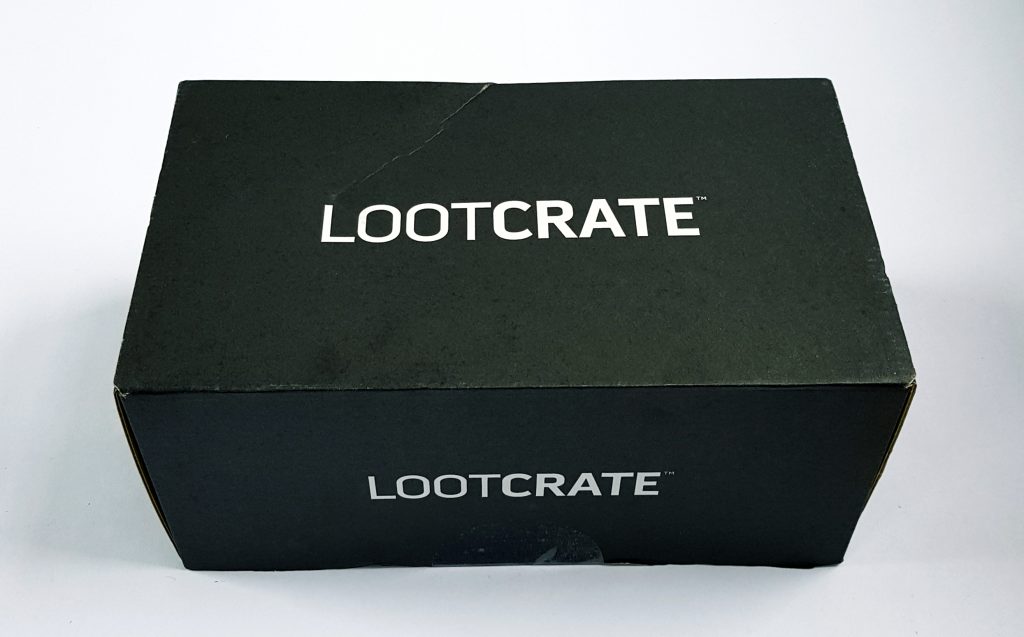 This month’s theme is ARTIFACTS. 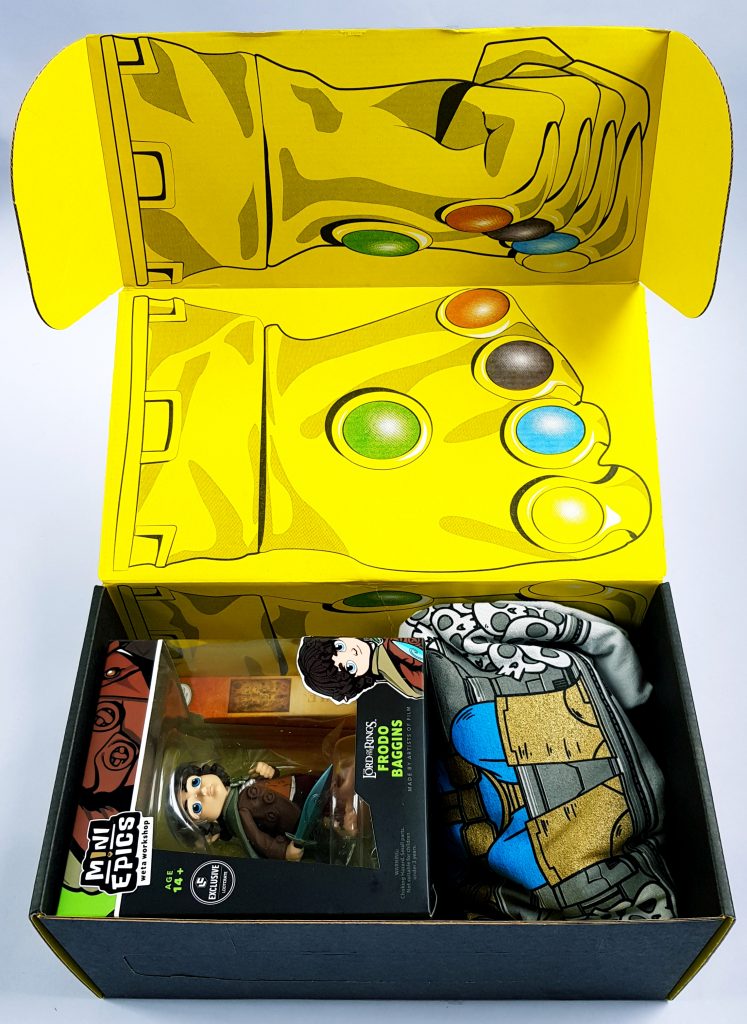 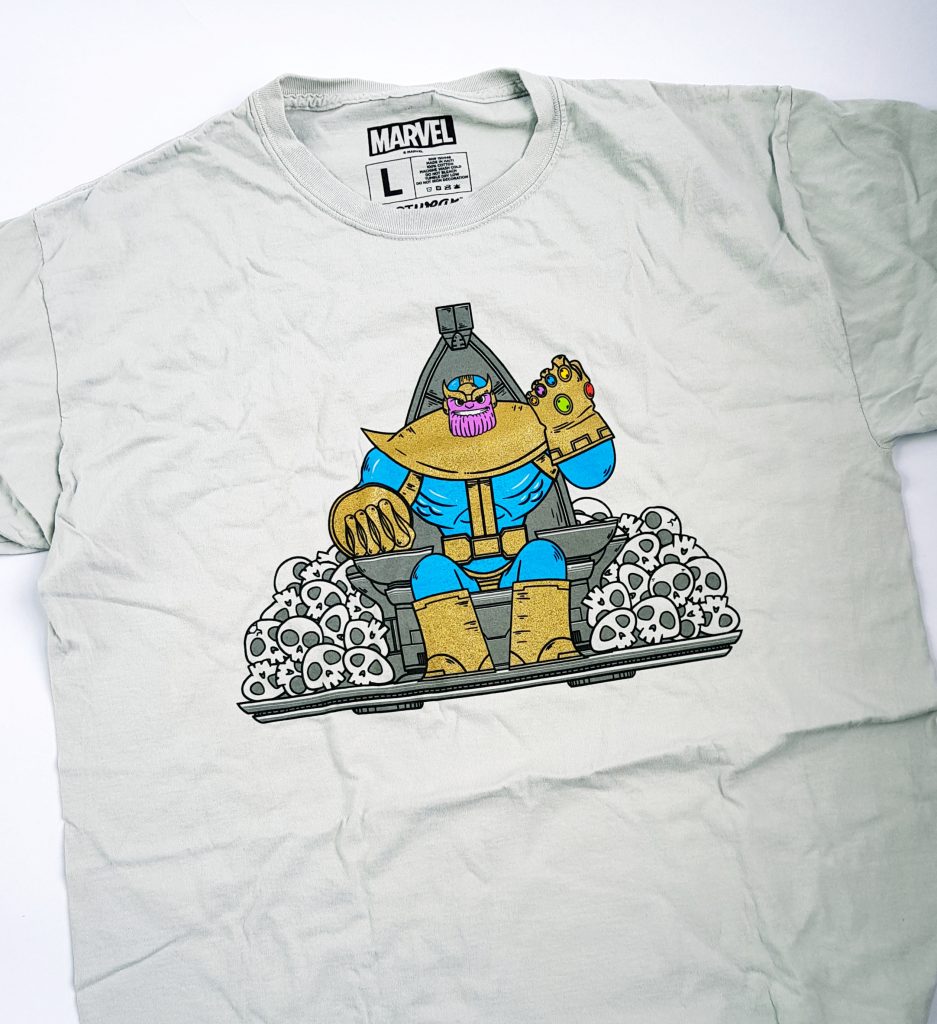 This month’s t-shirt shows Thanos sitting on his throne with his collection of Infinity Stones. 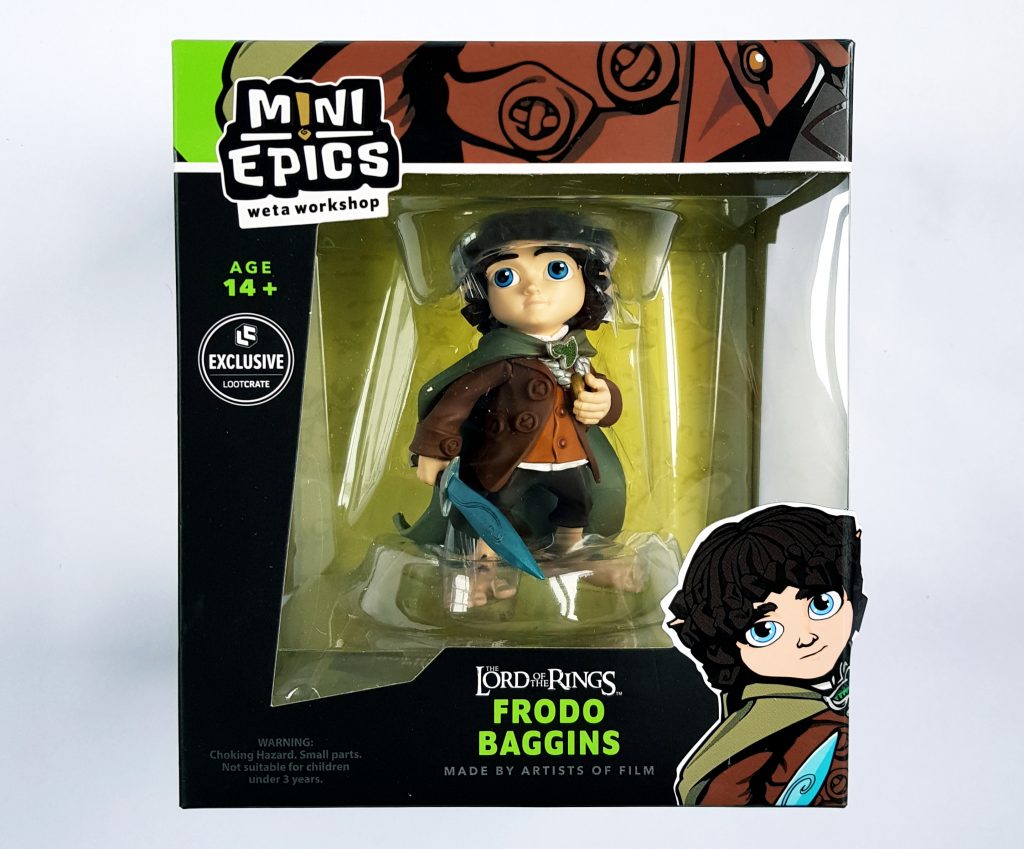 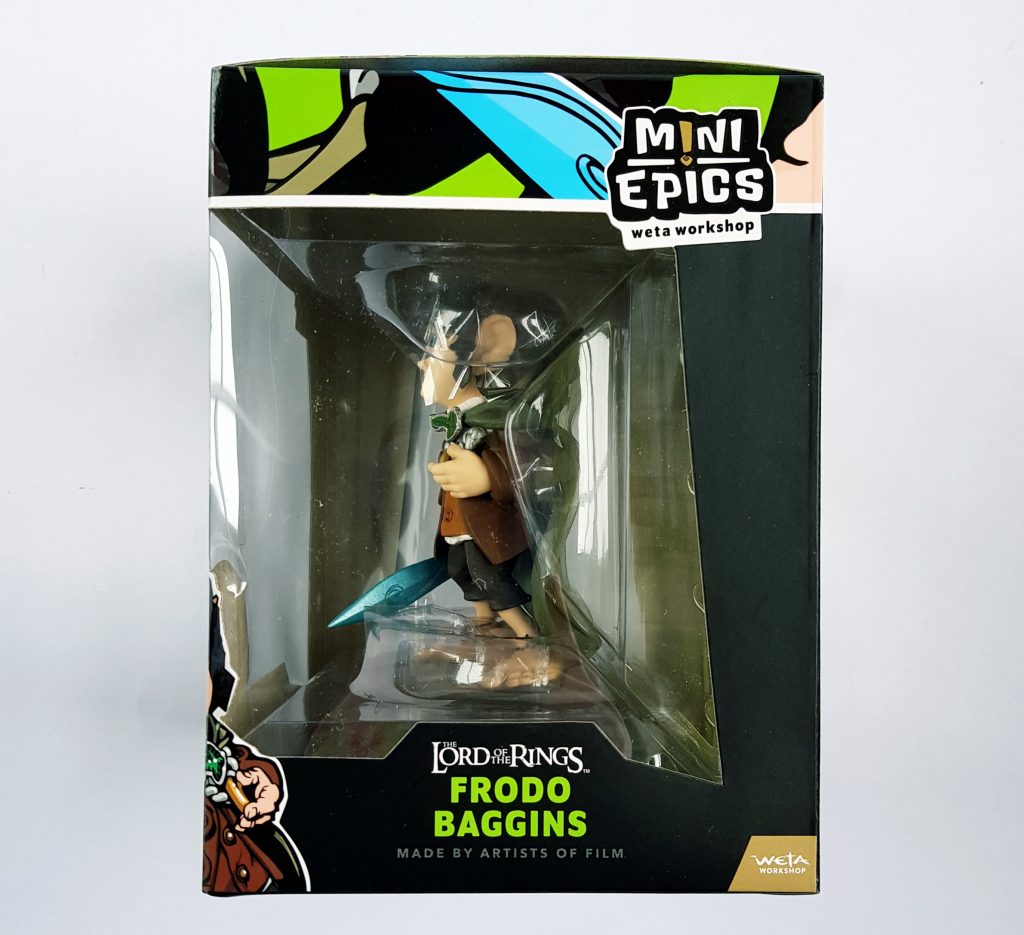 This is a Loot Crate Exclusive figure of Frodo with his sword, Sting. You can see it’s definitely modelled on the movie aesthetic. 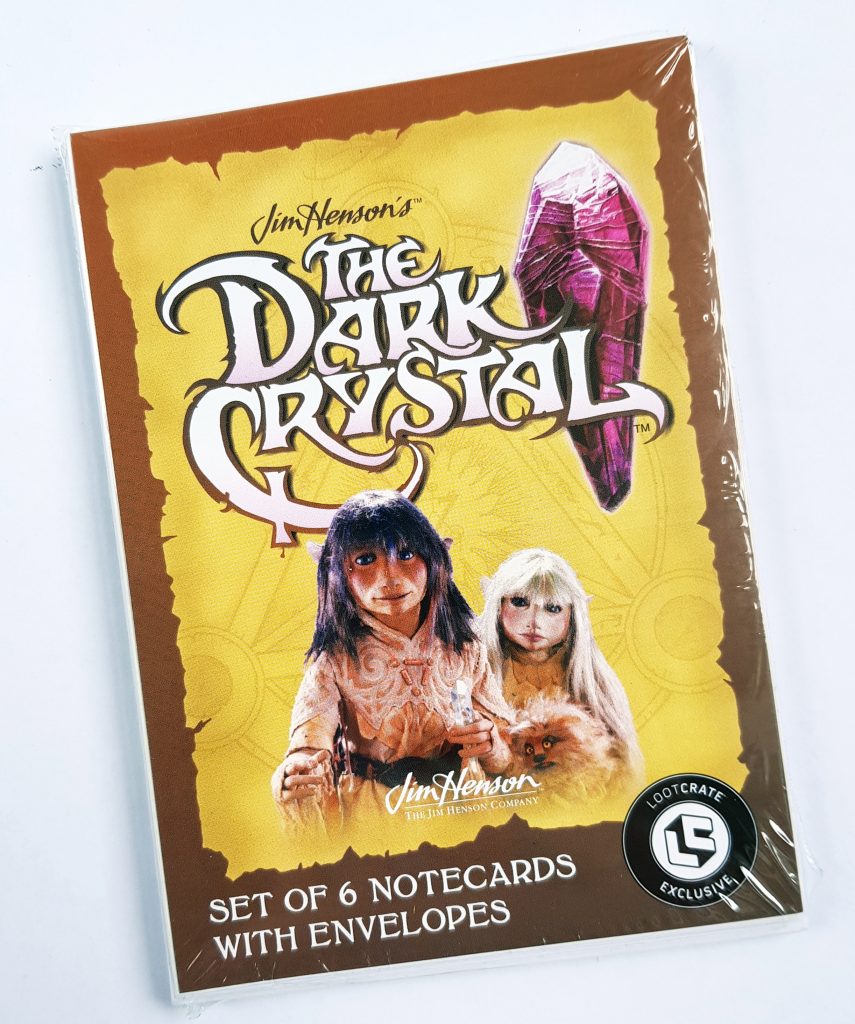 This is a set of 6 Dark Crystal Notecards. They’re pretty small, smaller than postcards. 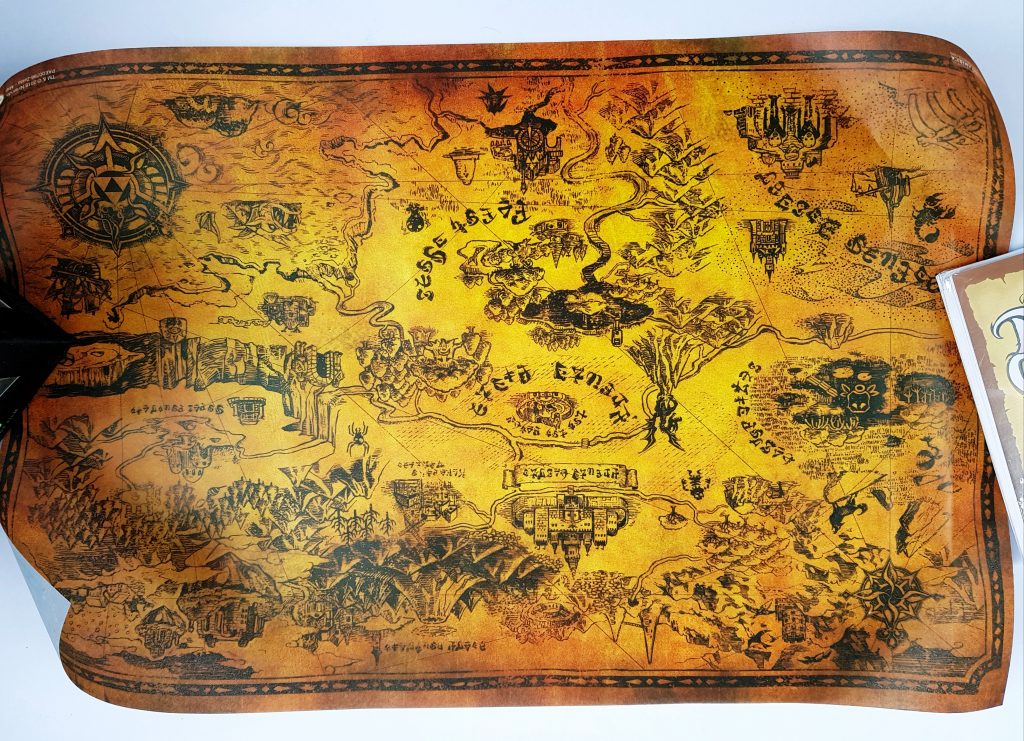 This is a Map of Hyrule from Zelda. It comes rolled up in the sleeve above, and is nicely detailed. 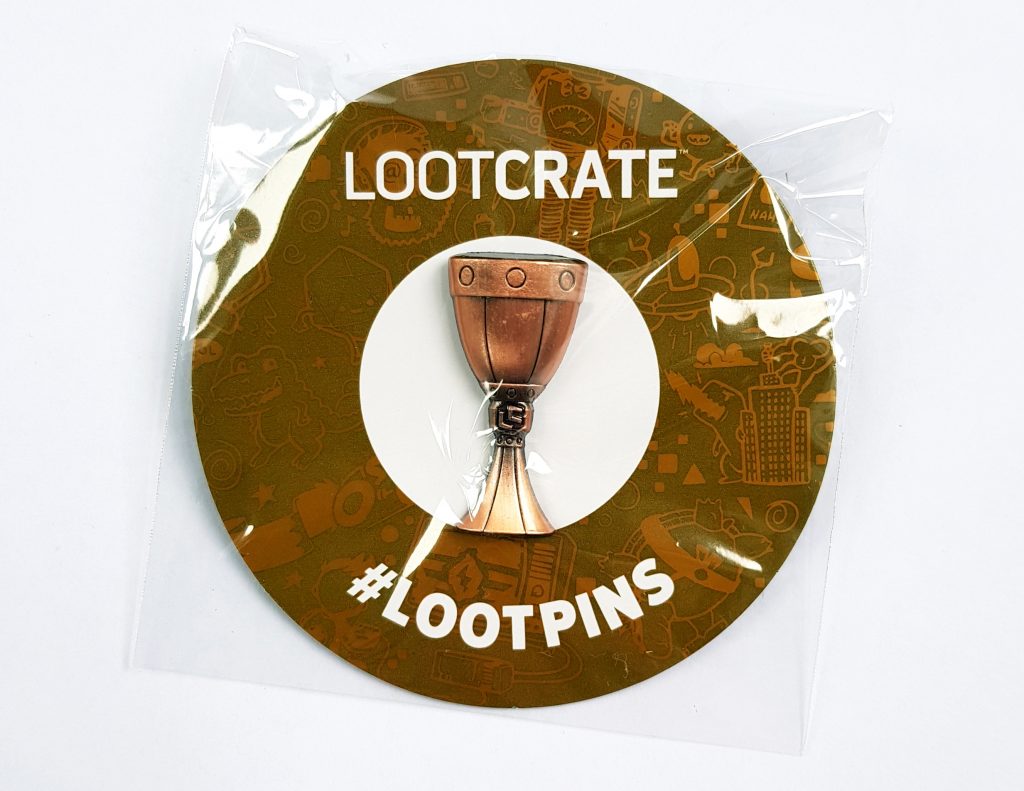 Finally, this month’s Loot Pin is a chalice. You can see how the LootCrate logo has been included on the stem.

T-shirt – geeky t-shirts are usually around £10. This is a fun design, and appropriate as the new Avengers movie features Thanos. It’s also 100% cotton, which is excellent.

Frodo figure – an exclusive item, similar in size to a POP, so I’ll say £10. I’m not a LotR fan, but I can appreciate the styling and detail on this figure.

Notecards – I estimate £2.50. These are small, and I think a little bit niche. I don’t think notecards are a good thing to include in a box like this, as they are designed to be used and then thrown away. The designs are nice enough, but items like this don’t really fit in.

Map – The detailing and design are nice, but the quality of the paper is thin. I also find posters a problem, because they have to be rolled up, so pretty much stay rolled. Unless you’re a diehard fan you’re not going to get it framed, and being so tightly rolled up it would be pretty much impossible to keep on the wall unless it was taped on. You can buy it online for £3.99.

Well, it’s more than the £24 cost, but below the supposed value.

The t-shirt is pretty great, I think possibly one of my favourite designs. I like the humor of the picture, and the timing with the Avengers movie is spot on.

I know LotR fans will love the figure, so even though I don’t, I can see how lots of people will!

The pin is quite a clever design, and a chalice is a great symbolic item.

As for the poster and notecards, they feel like perhaps not filler items but certainly afterthoughts. Dark Crystal has a cult following, though not as much as the other Jim Henson classic Labyrinth. Also I think two paper items in the same box isn’t a good idea.

I still miss the menu booklet. It looks like they’re not even bothering putting the magazine booklet online any more, as there’s still last month’s up on the link.

One good thing is that the box actually arrived in the month it was supposed to, which hasn’t happened for a while. Perhaps they’re getting on top of their delivery service, which has been very poor of late.

The theme is quite fun, but again, very broad, so there’s an awful lot of options there.

A couple of nice things, but overall rather hit and miss.