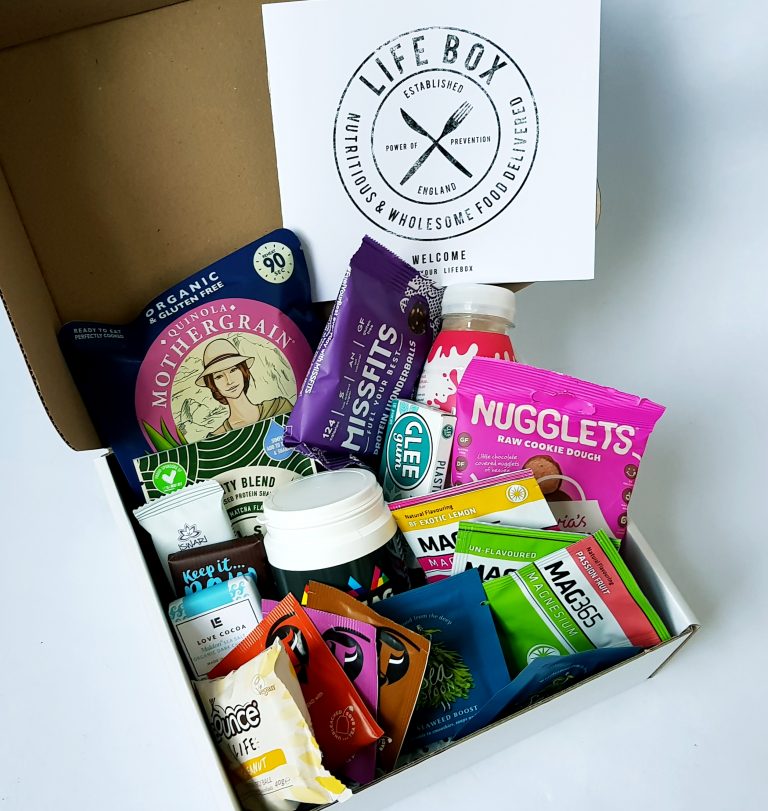 LifeBox is a monthly collection of natural snacks, drinks and ingredients to support a healthy lifestyle. All items are vegan, and gluten and dairy free. It costs from £22.95 per month, including postage.

This box is the Energy version, which is designed to support activity and recovery for both men & women. As t happens, there might be occasional items which are not vegan in this version of the box, but it’s very rare. 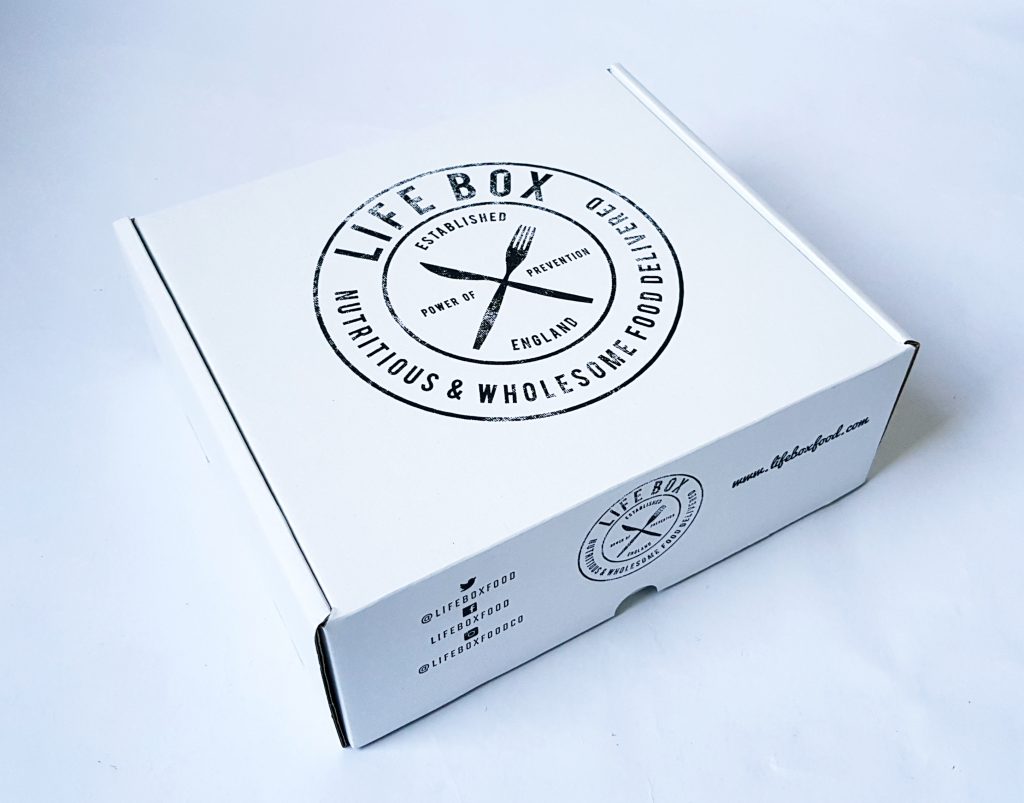 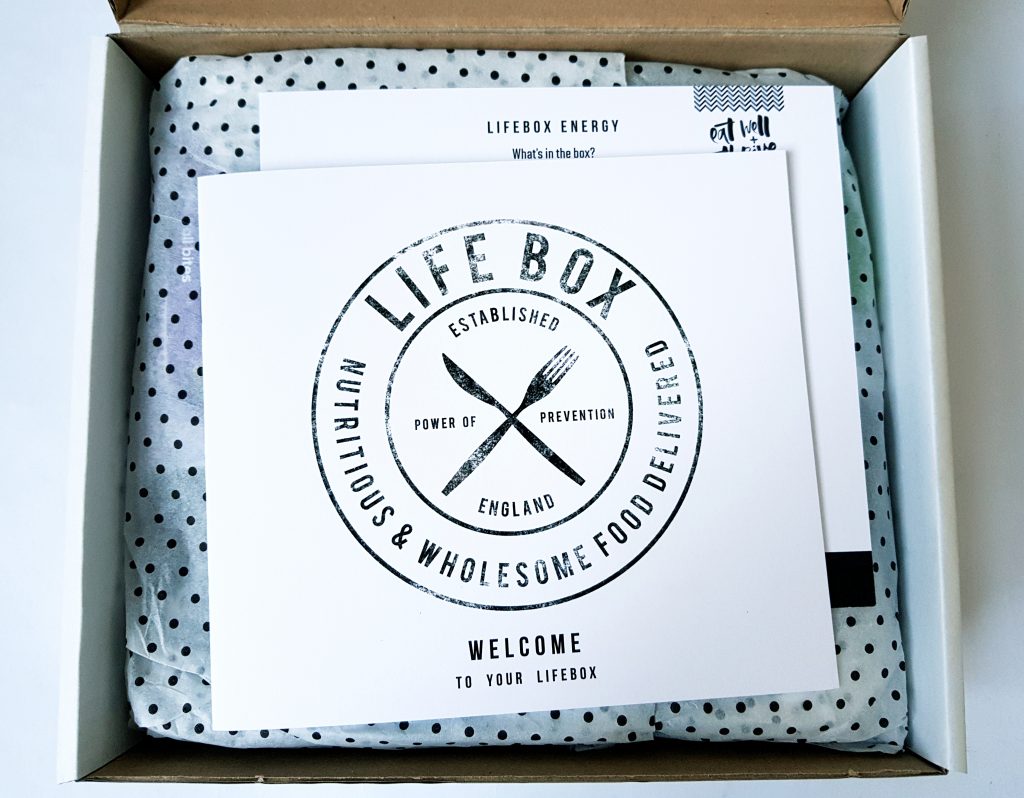 The box is always impressively heavy! There’s a lot stuffed in there.

On the top you can see their booklet. 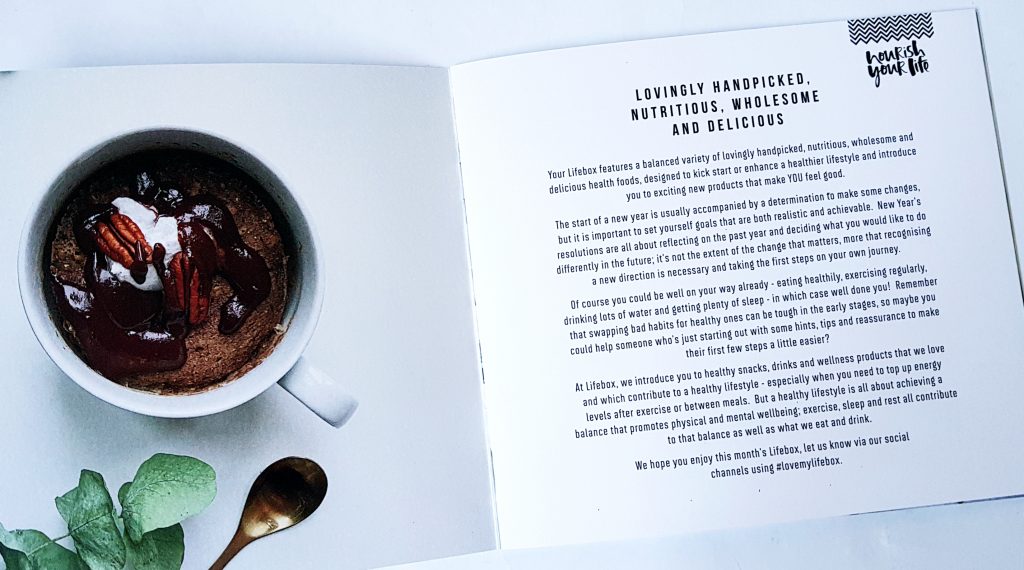 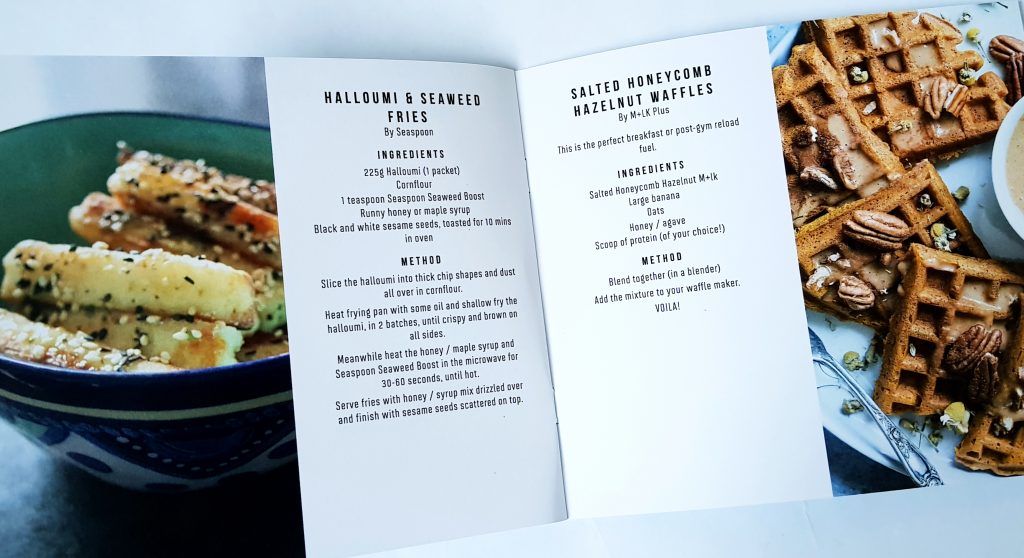 This has lots of nice stuff inside, including info on some of the contents plus recipes that use items from the box itself. 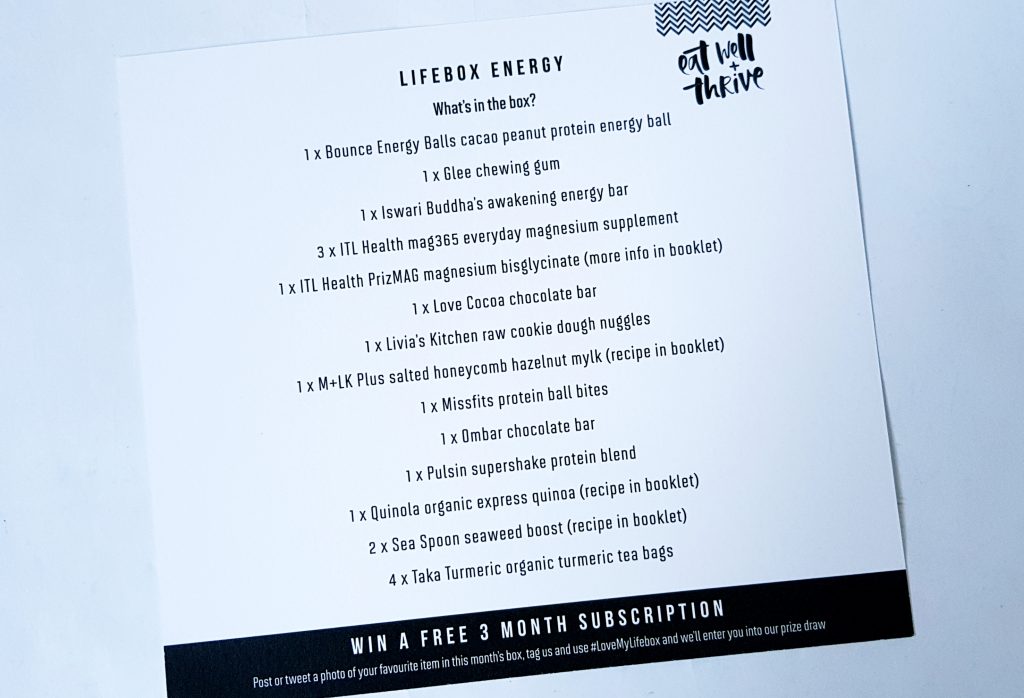 You’ve also got a menu card listing everything inside the box. 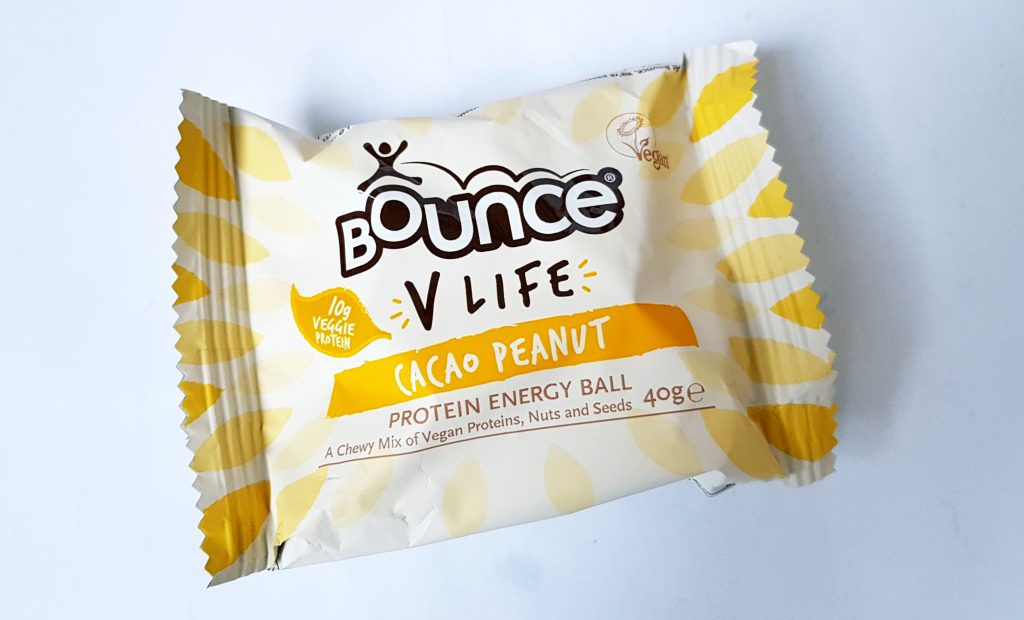 These Bounce Energy Balls are fantastic! This cacao peanut variety is especially delicious, plus it’s got a nice 10g of protein. 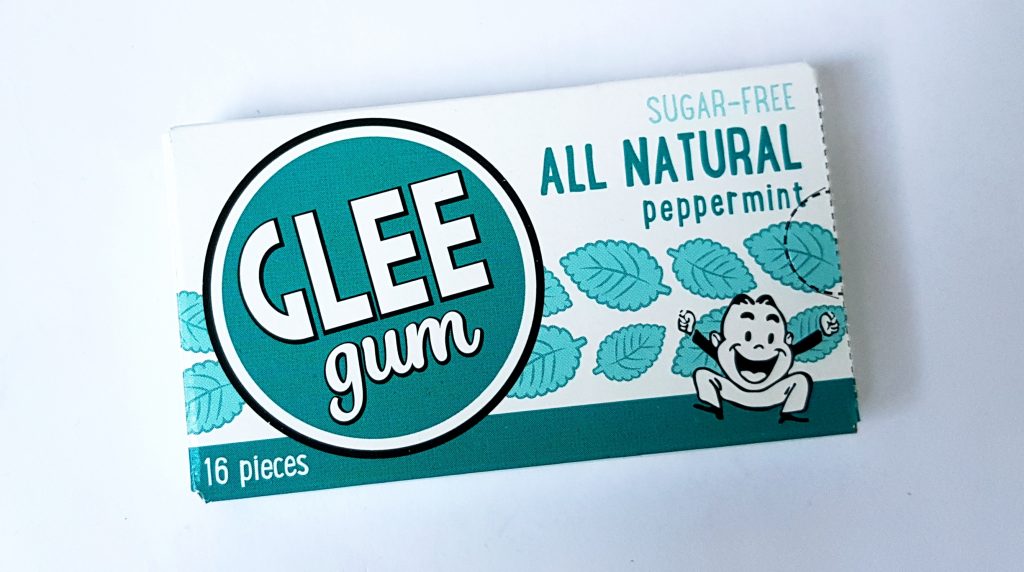 It can be difficult to find sugar free gum that doesn’t have the nasty artificial sweeteners, so I’m thrilled with this Glee Gum. It’s made with all natural ingredients including sustainably harvested chicle, and absolutely no aspartame. 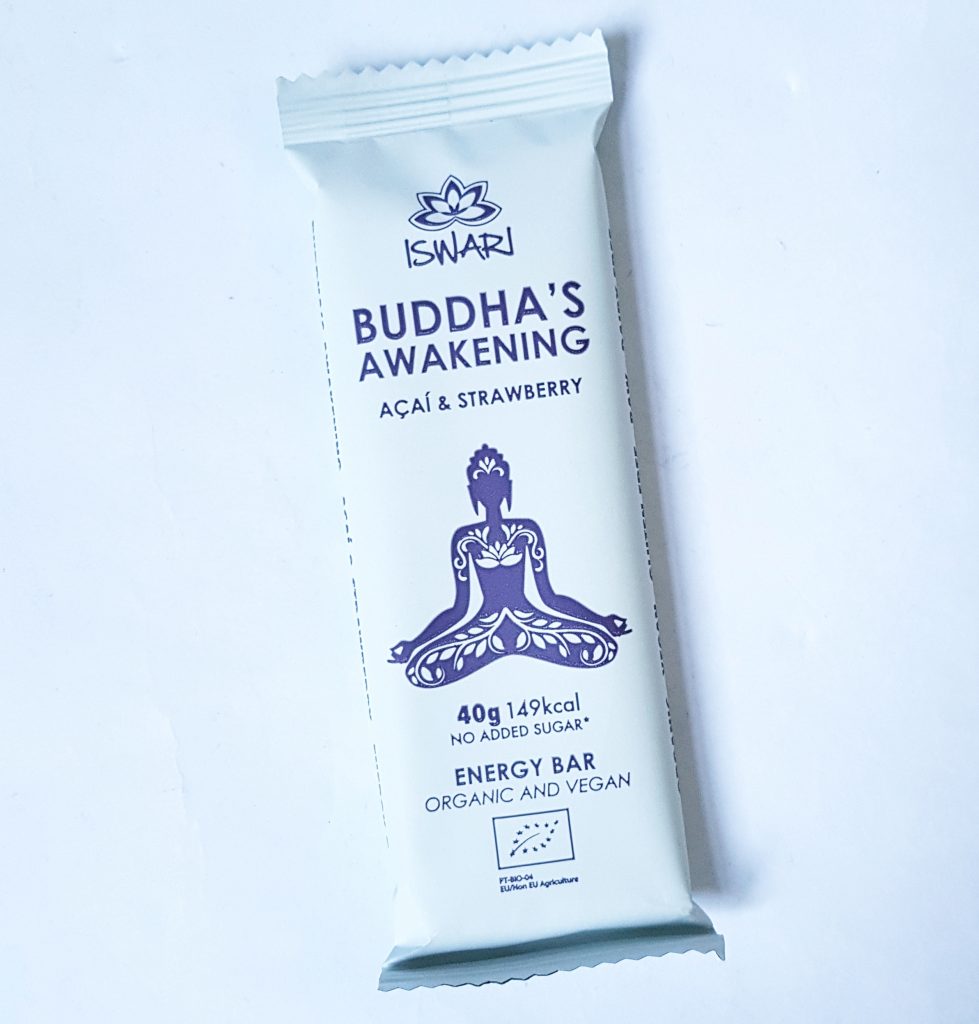 I always keep energy bars in my bag, and this Iswari Buddha’s Awakening Energy Bar is terrific. It’s organic and only 149 calories, which makes it a perfect snack.

Here are three ITL Health mag365 Everyday Magnesium Supplement sachets. You’ve got two flavoured and one unflavoured, so they can be added to shakes, drinks, or just mixed with water. Magnesium supplementation is often considered to help regulate blood sugar levels, and aid sleep. 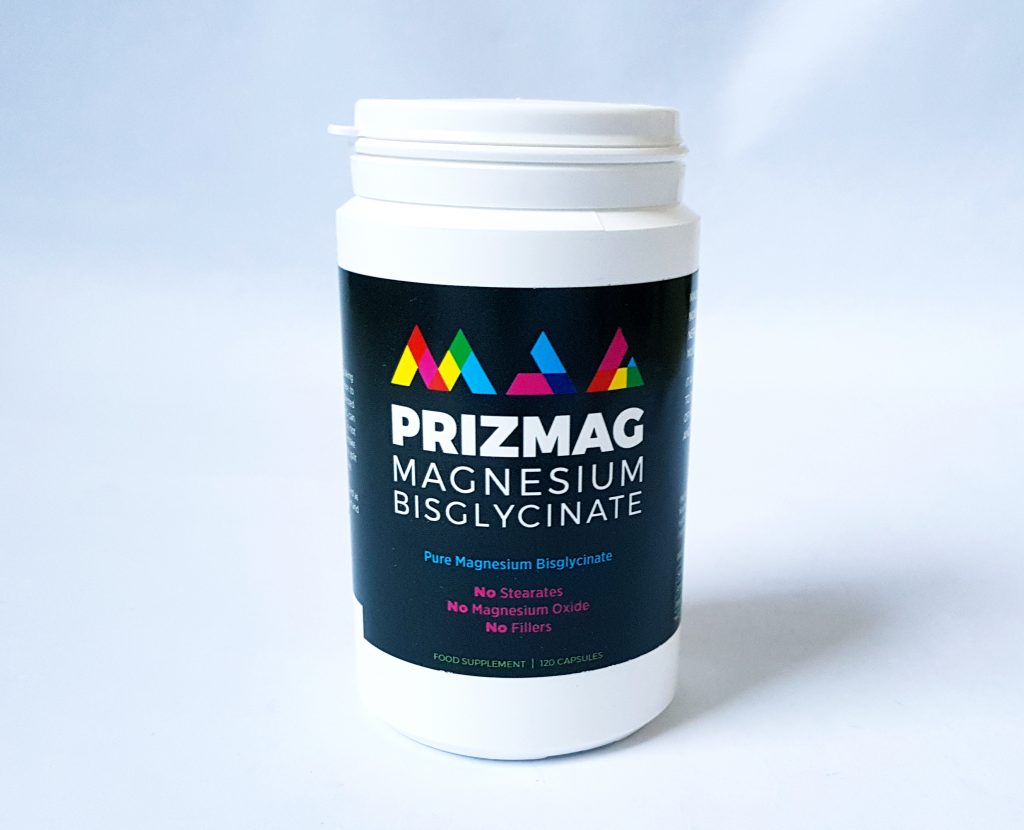 Here’s a full month’s supply of daily magnesium from ITL Health PrizMAG Magnesium bisglycinate. This is a formula that is easily absorbed by the body and is 100% magnesium. 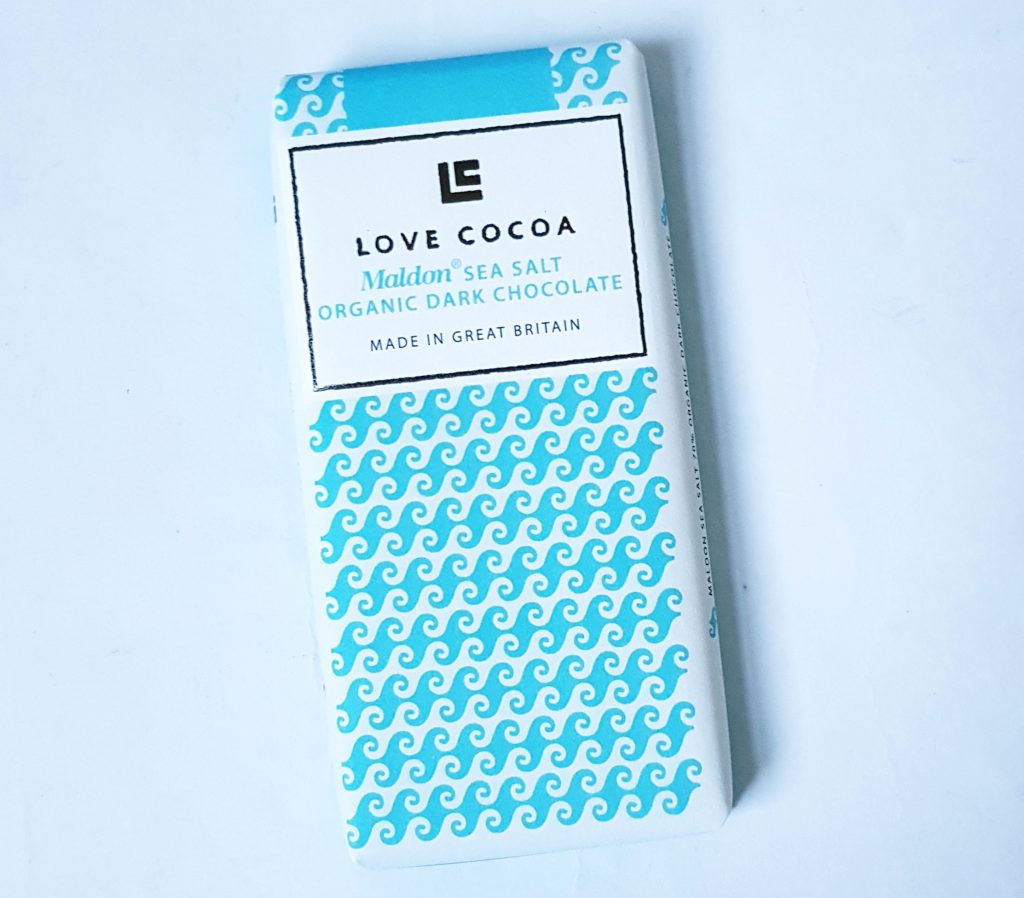 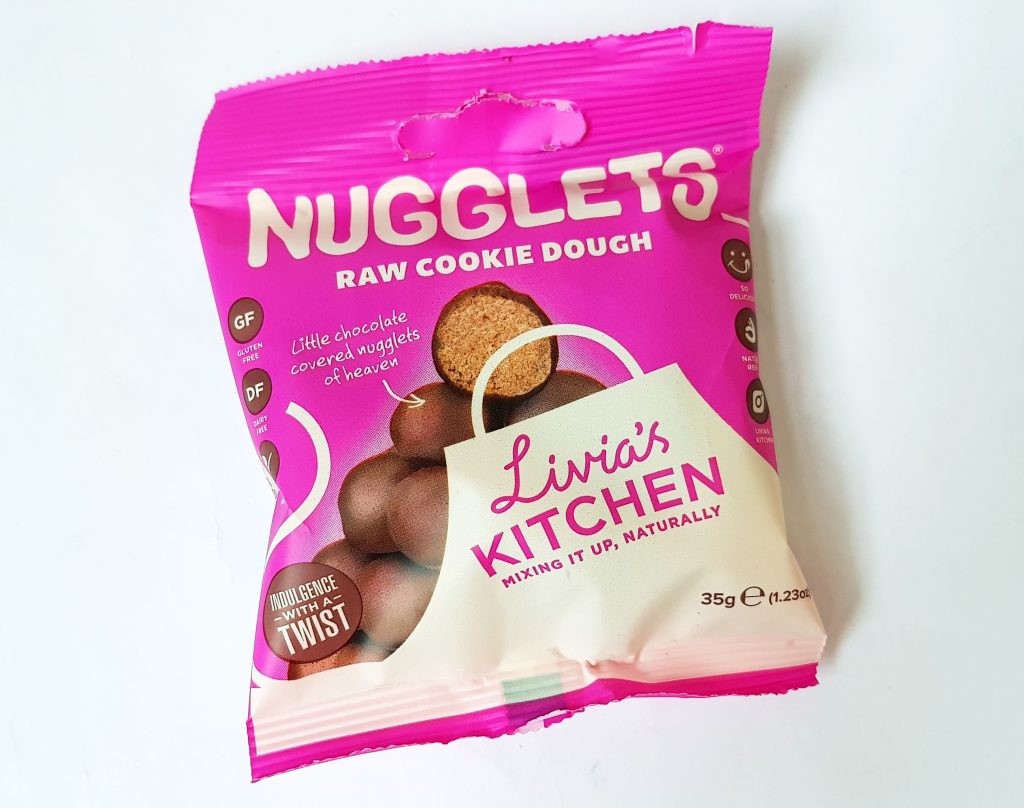 Another treat, Livia’s Kitchen Raw Cookie Dough Nugglets. While they’re not quite the same as eating actual cookie dough, they’re a nice sweet treat to distract you from the thought of butter and sugar! Plus at 129 calories a bag they’re pretty gentle on the diet. 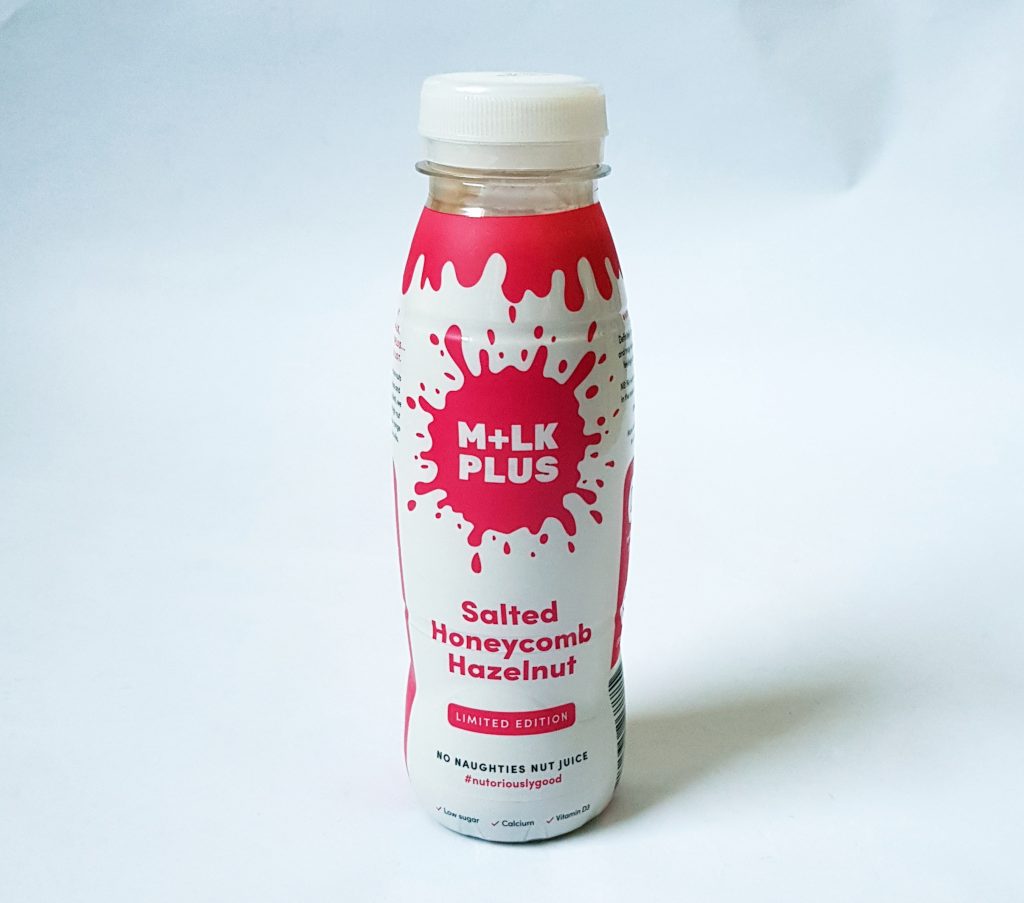 There’s a recipe for waffles in the booklet using this M+LK Plus Salted Honeycomb Hazelnut Mylk but it sounds like it would be delicious alone! This is vegan, and of course also very useful for anyone with a dairy allergy. 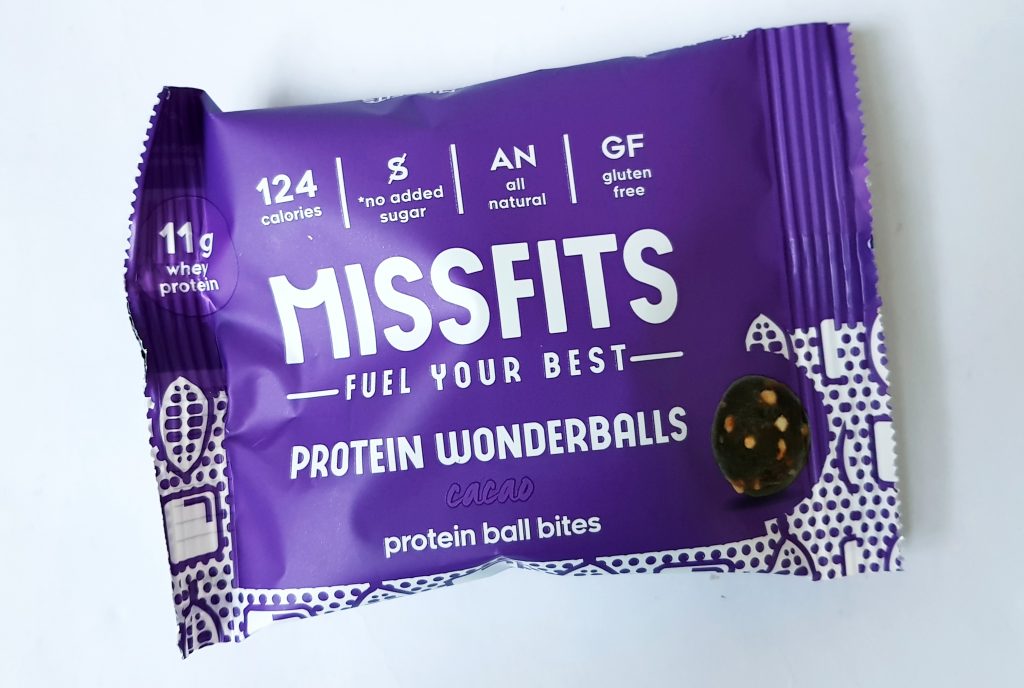 These Missfits Protein Ball Bites have an impressive 11g of protein and only 124 calories, which is great macros if you’re looking to keep your protein levels up and for after the gym. They also have a rich dark chocolaty taste, much nicer than your average high protein snacks. 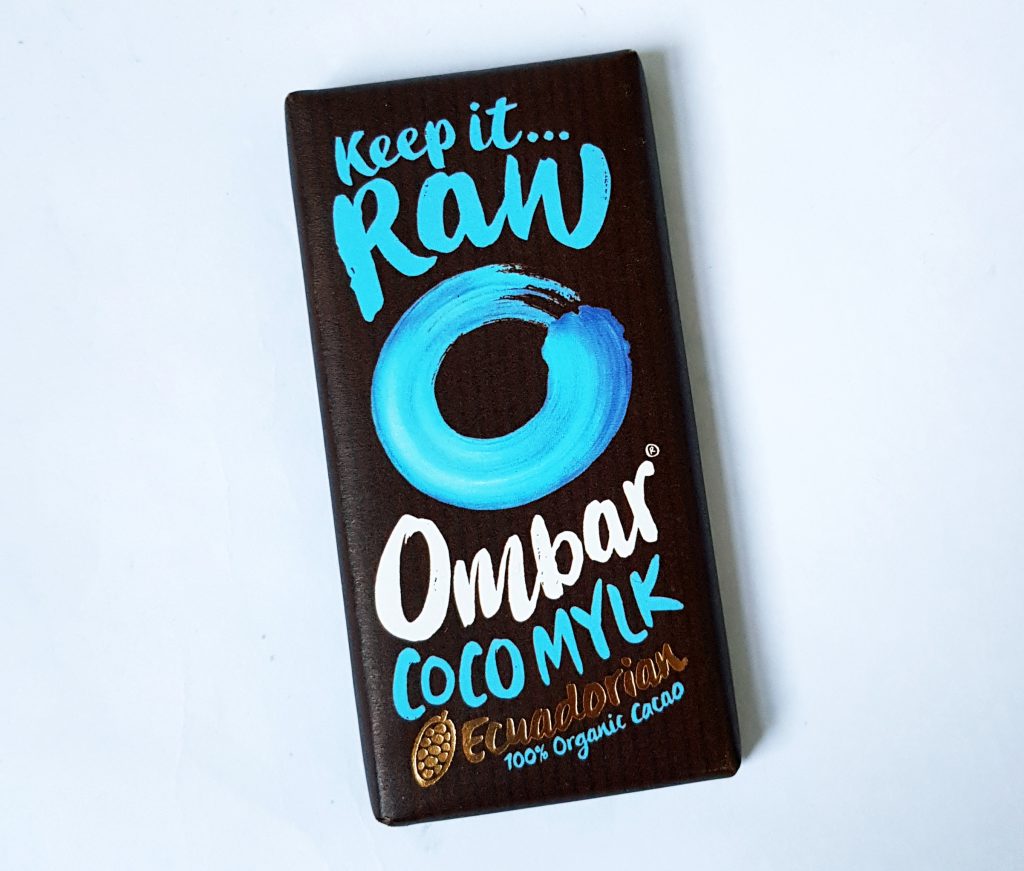 The Ombar is another chocolate treat! This is raw chocolate, which tastes a little different than the usual commercial stuff, but it’s very nice, and of course organic. 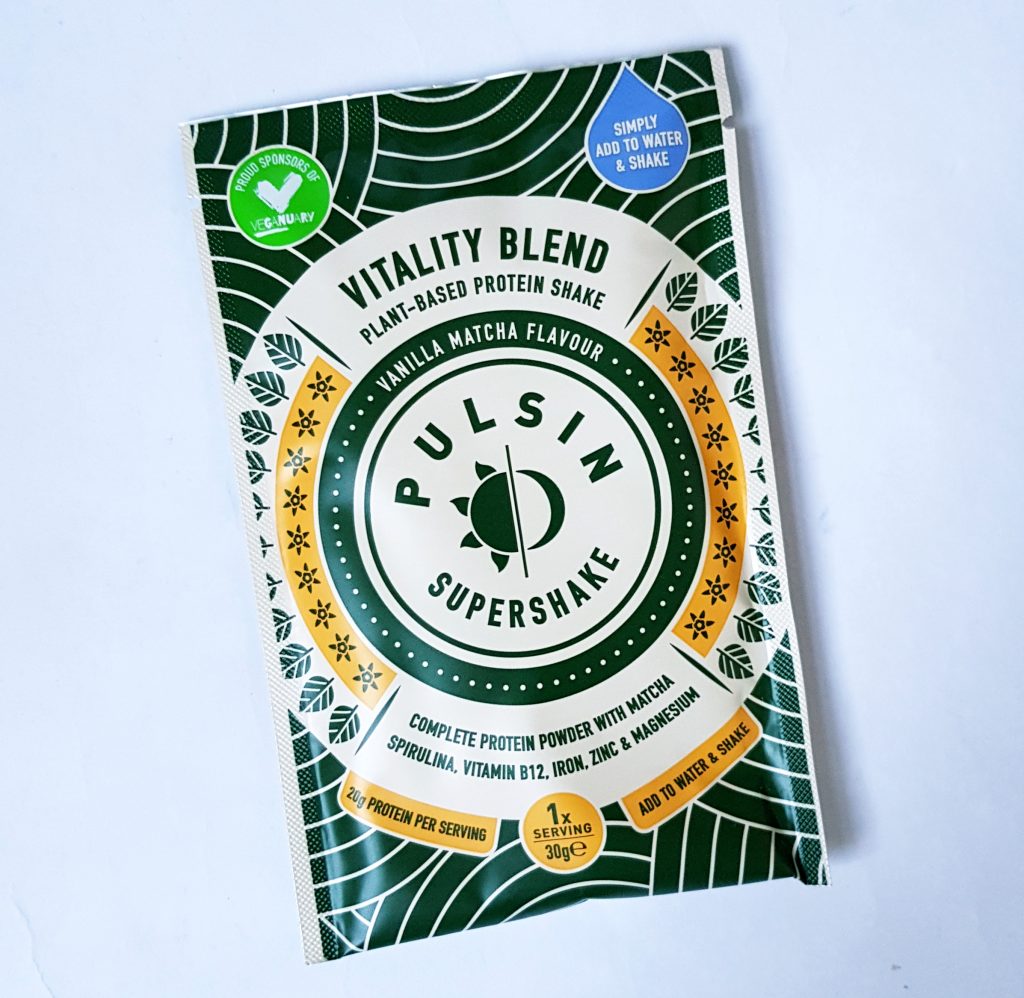 It’s quite useful to have a single serve sachet of Pulsin Supershake Protein Blend. As well as 20g of protein it contains a blend of vitamins and minerals to support a vegan diet. I’m not vegan, but I do like the addition of these nutritional extras. This is Vanilla Matcha flavour. Protein powder is never going to taste amazing, but this does pretty well, the matcha cuts some of the sweetness of the vanilla. 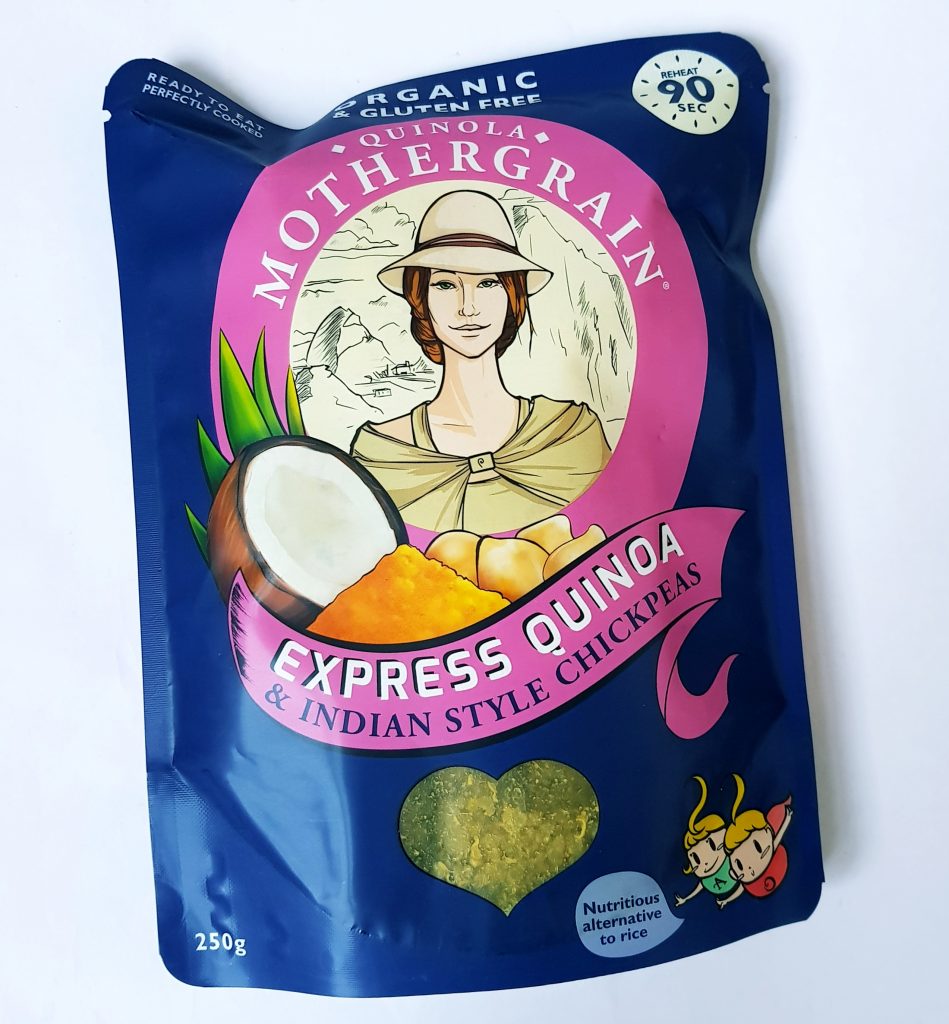 Here is a microwaveable pouch of Quinola Organic Express Quinoa. This is made with Indian-style spices and also include chickpeas, and can be eaten hot or cold. I have to confess that I don’t like these kind of spices, but I appreciate the convenience of the pouch. There’s also a recipe in the booklet to use this to make a vegan burger, which is rather clever! 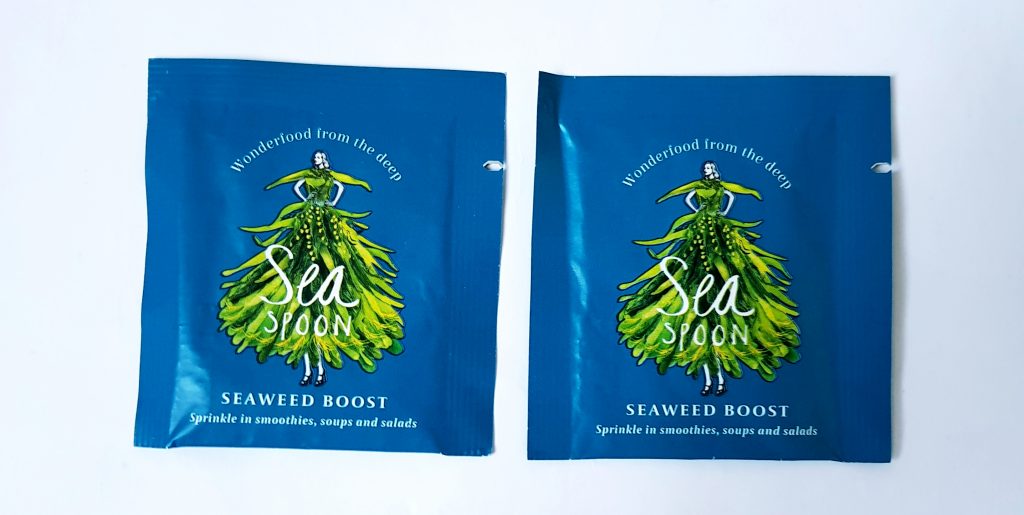 Two little sachets of Sea Spoon Seaweed Boost. Seaweed has an impressive nutritional spectrum, and this salty powder can be sprinkled on almost anything to give a pop of flavour and a mineral boost. The booklet suggests sprinkling it on halloumi fries, which sounds absolutely delicious! 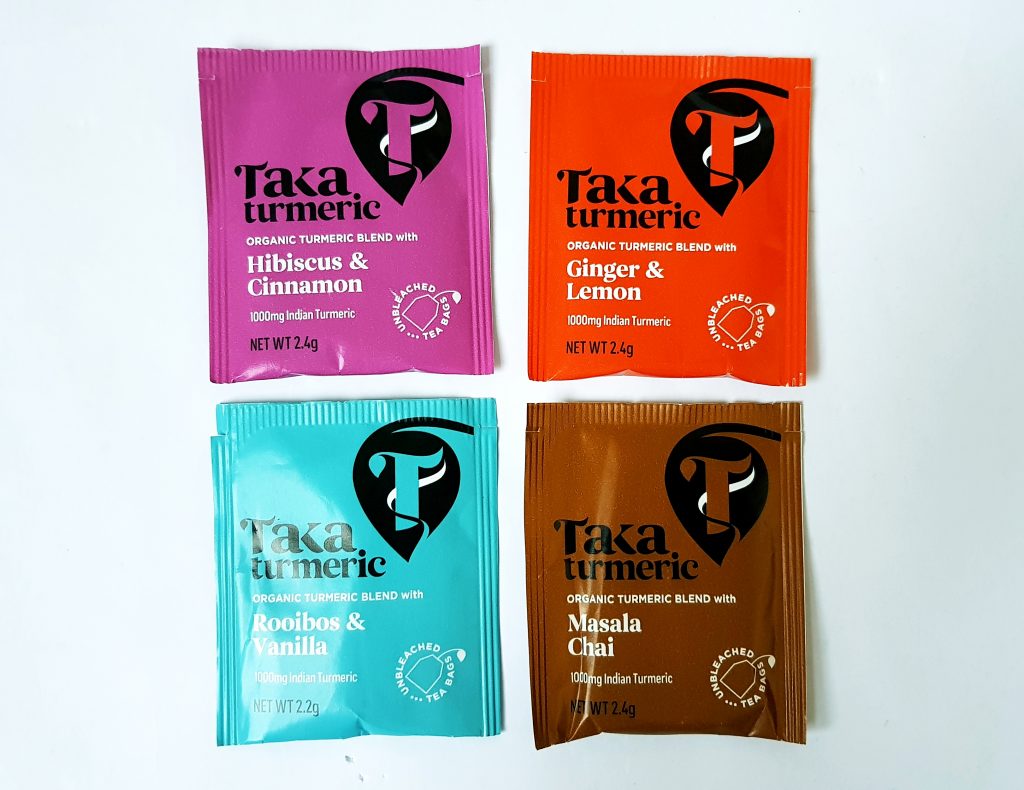 This is a nice selection of healthy yet tasty treats.

I love that so many items are organic, and many, though not all, are vegan. I actually don’t care about vegan at all because I’m not vegan, but as said above the Lifebox Energy is not restricted to vegan items.

I really like all the snacks, though my absolute favourite is the Missfit Protein Ball Bites because they have such a fantastic nutritional profile. I’m really glad I’ve discovered them as they make a great change to the usual odd-tasting protein bar, and I’ll definitely buy more.

I’m also pleased with the magnesium supplement as I never get enough sleep, so I’m keen to try it to see if it helps at all. I’m not quite convinced there needed to be another three sachets along with the big bottle, but I guess it’s useful to try other options. But it will certainly be useful for me.

The booklet and recipes is a very nice touch as well.

While this isn’t exactly a cheap box, good-quality snacks aren’t cheap either! Many are from small independent producers, and there is an emphasis on sustainability, organic, and ethical production. You can even feel good about eating chocolate!

I like this month’s selection very much, and while the quinoa isn’t something I personally like, I know my husband will, plus I’m glad to have found a new protein snack!

This is a great way to try out new foods, get a new recipes, and discover new products. Perfect to keep you away from processed junk food and support a healthy lifestyle!

How would you rate LifeBox ?