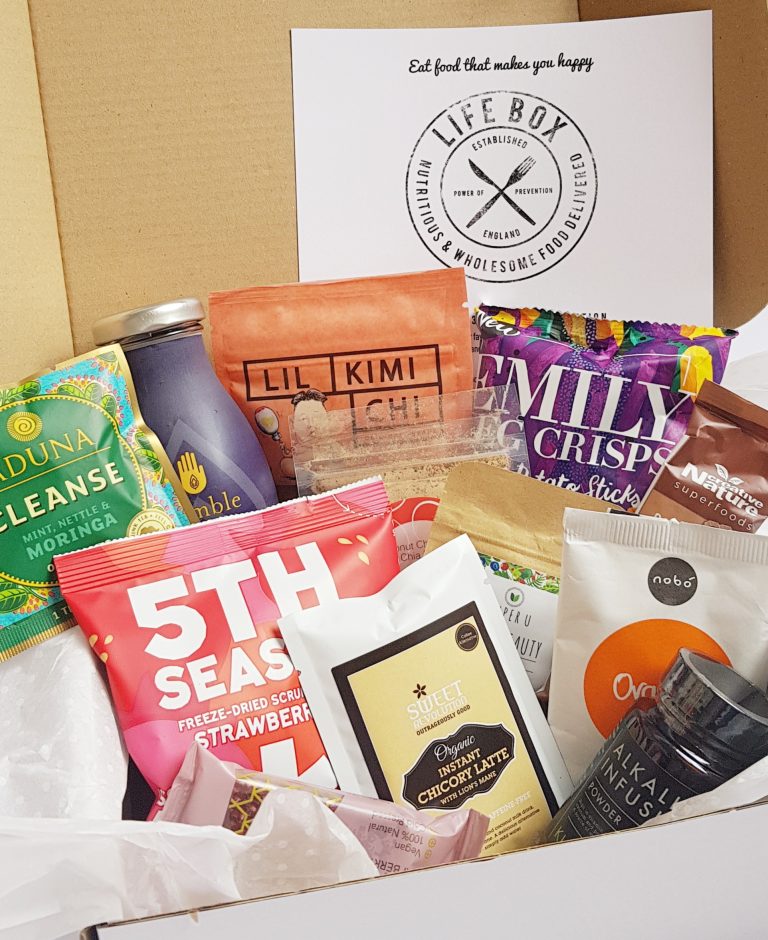 LifeBox Classic is a monthly collection of natural snacks, drinks and ingredients to support a healthy lifestyle. All items are vegan, and gluten and dairy free. It costs from £22.95 per month, including postage. 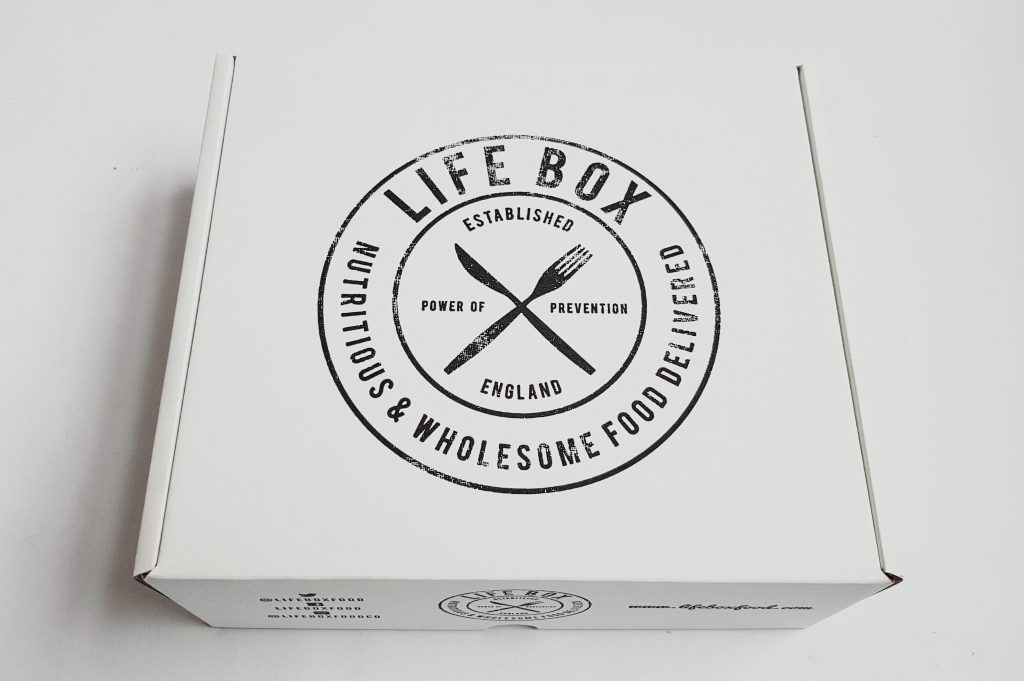 The box is impressively heavy, and large enough so that you’ll need to be in to receive it (or arrange with our mailman to leave it somewhere safe.) 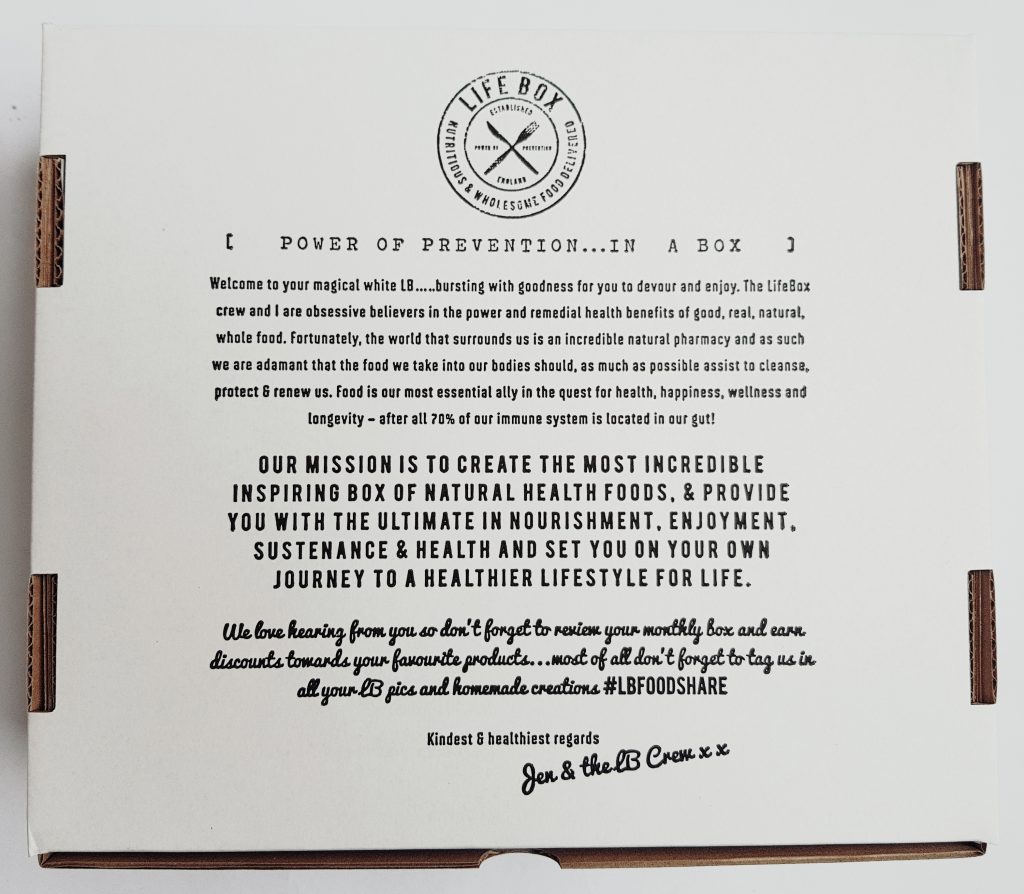 There’s a nice little mission statement on the bottom of the box. 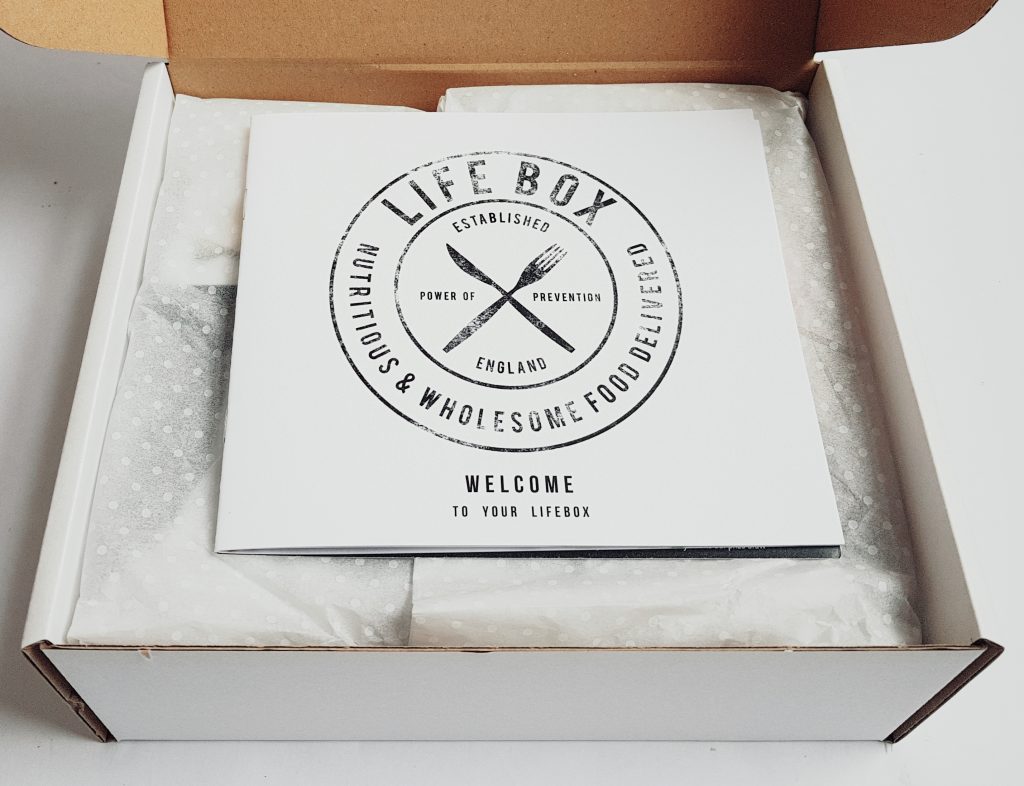 There’s a separate menu card, but this is actually a recipe booklet.

There are five recipes in total, some using items from the box itself. 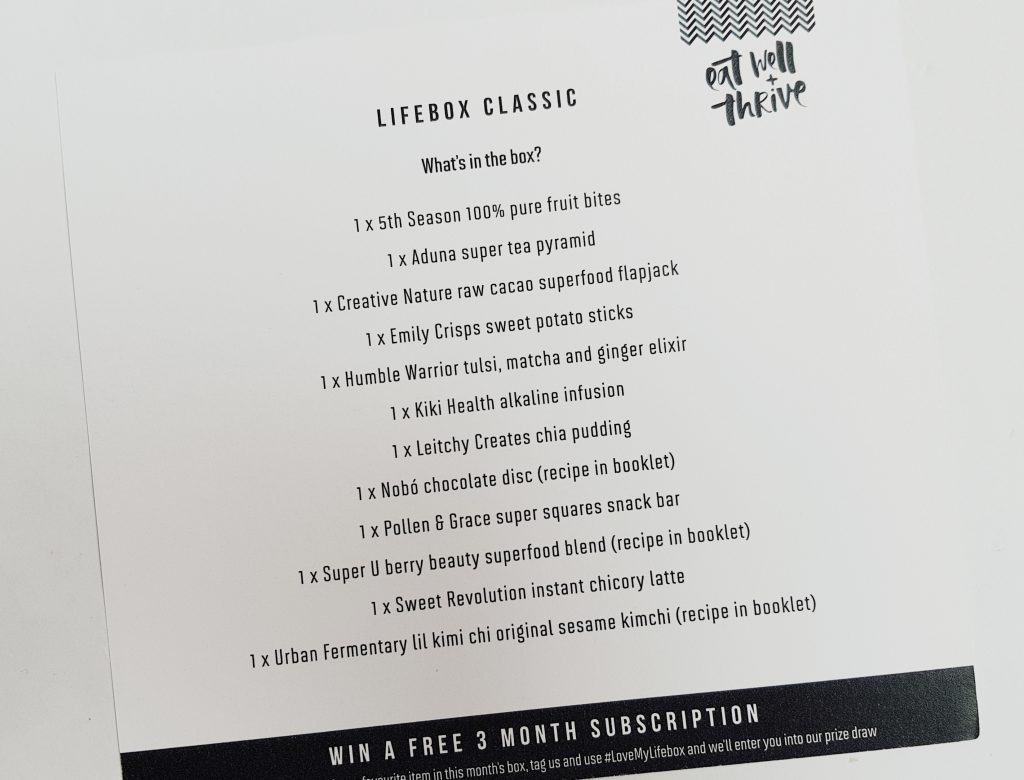 Here’s the menu card, and let’s have a closer look at everything. 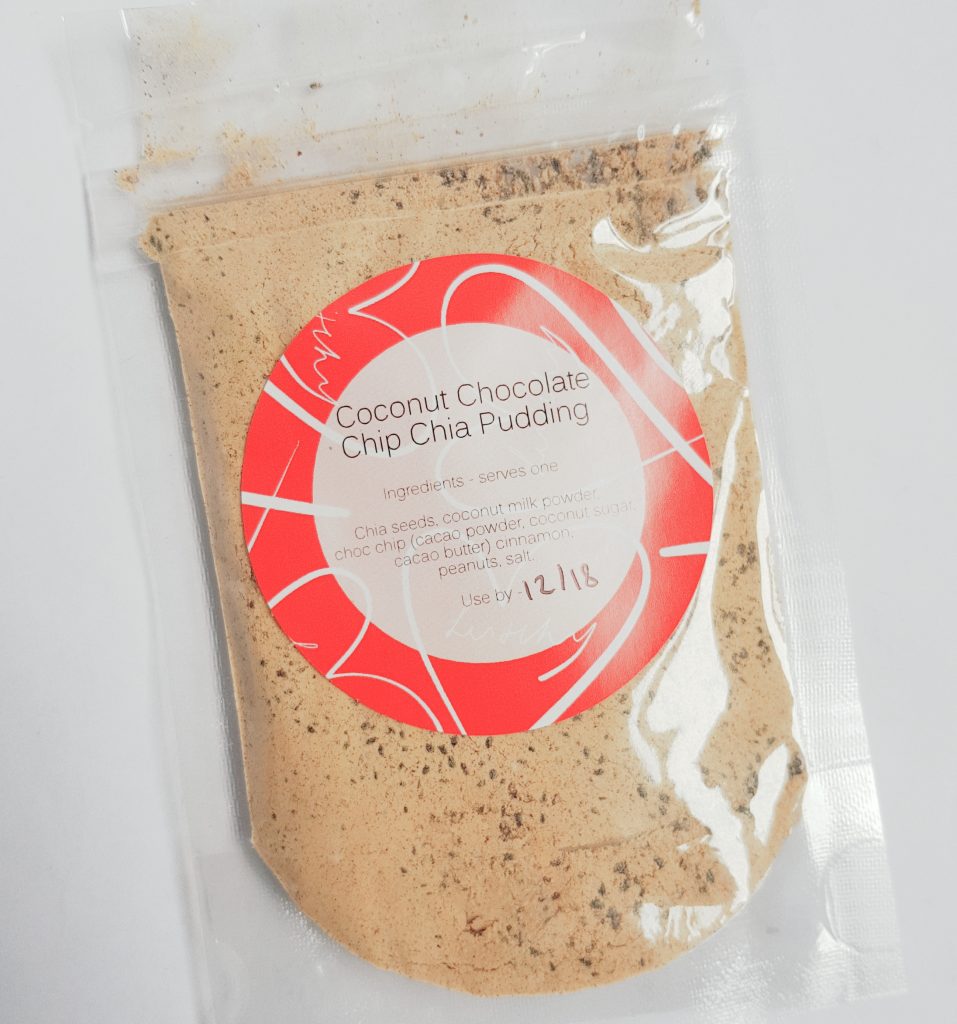 This is a package of mix for Coconut Chocolate Chip Chia Pudding. 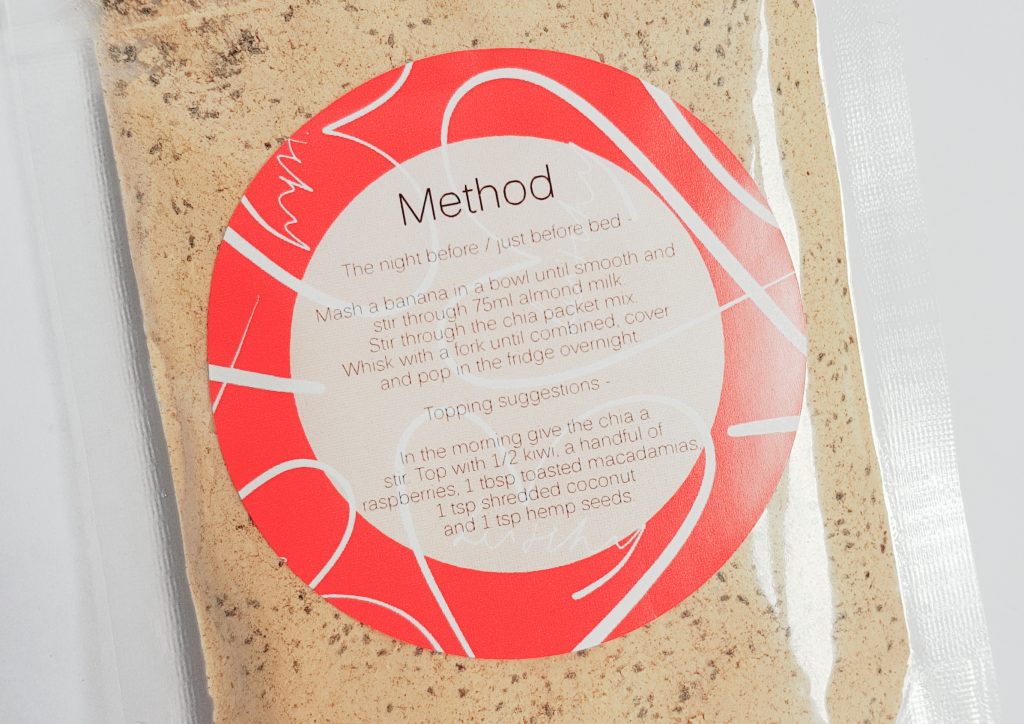 On the back are the instructions, you mix it with a banana a milk (it says nut milk but there’s no reason you can’t use regular milk or even water). Chia puddings are rather a nice healthy snack or dessert, and this mix is handy to have around if you don’t have time to individually gather ingredients. 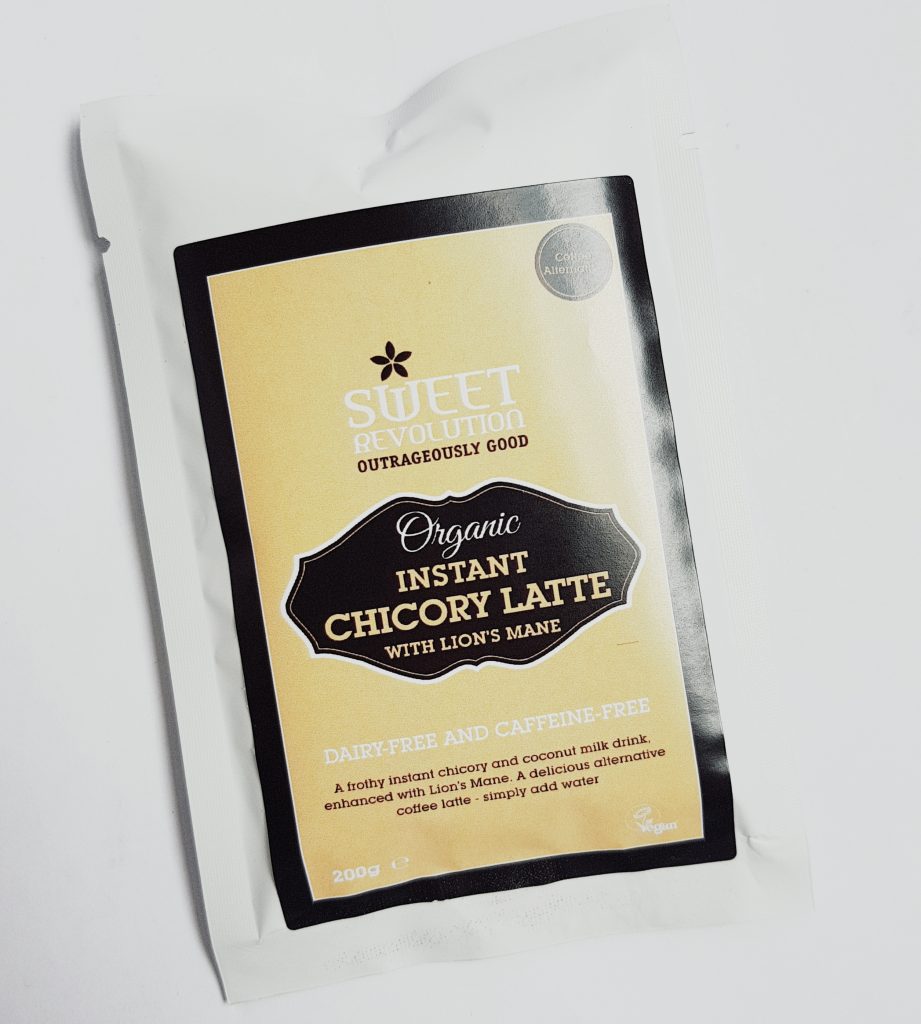 Another mix, Instant Chicory Latte. I’m never quite convinced by coffee mixes, but this looks a lot better quality than the average supermarket packet. I also like my coffee to have caffeine, so I would just enjoy this as a nice drink rather than a coffee substitute. An advantage is that it is dairy free, so my dairy free husband can have a latte for once! 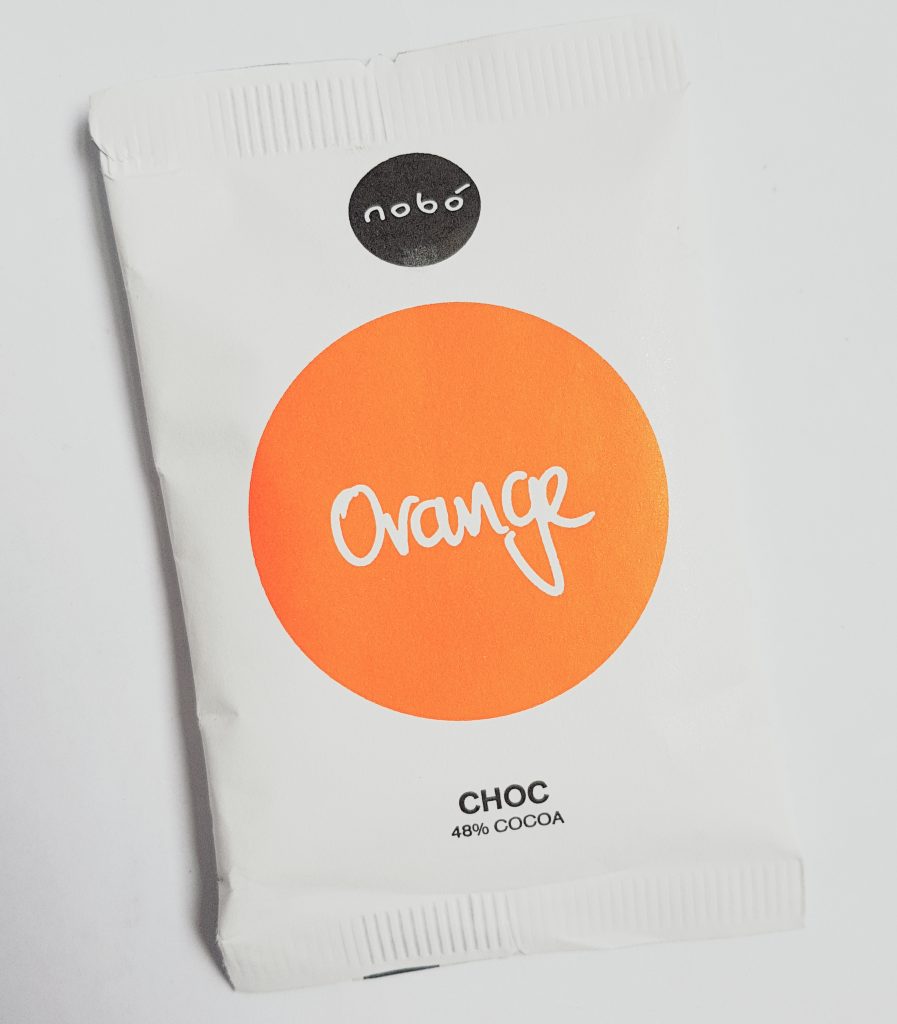 This Nobo Chocolate Disc was perfect for my husband. He loves milk chocolate but of course can’t eat it (as he’s dairy free), plus he loves chocolate orange. I’m not being generous either, because I don’t like chocolate orange at all, so he’s welcome to it! Apparently it’s very creamy and orangey, and he would like more. (There’s a recipe in the booklet for chocolate fudge sauce which suggests using this chocolate, but personally I think it’s better to just eat it!) 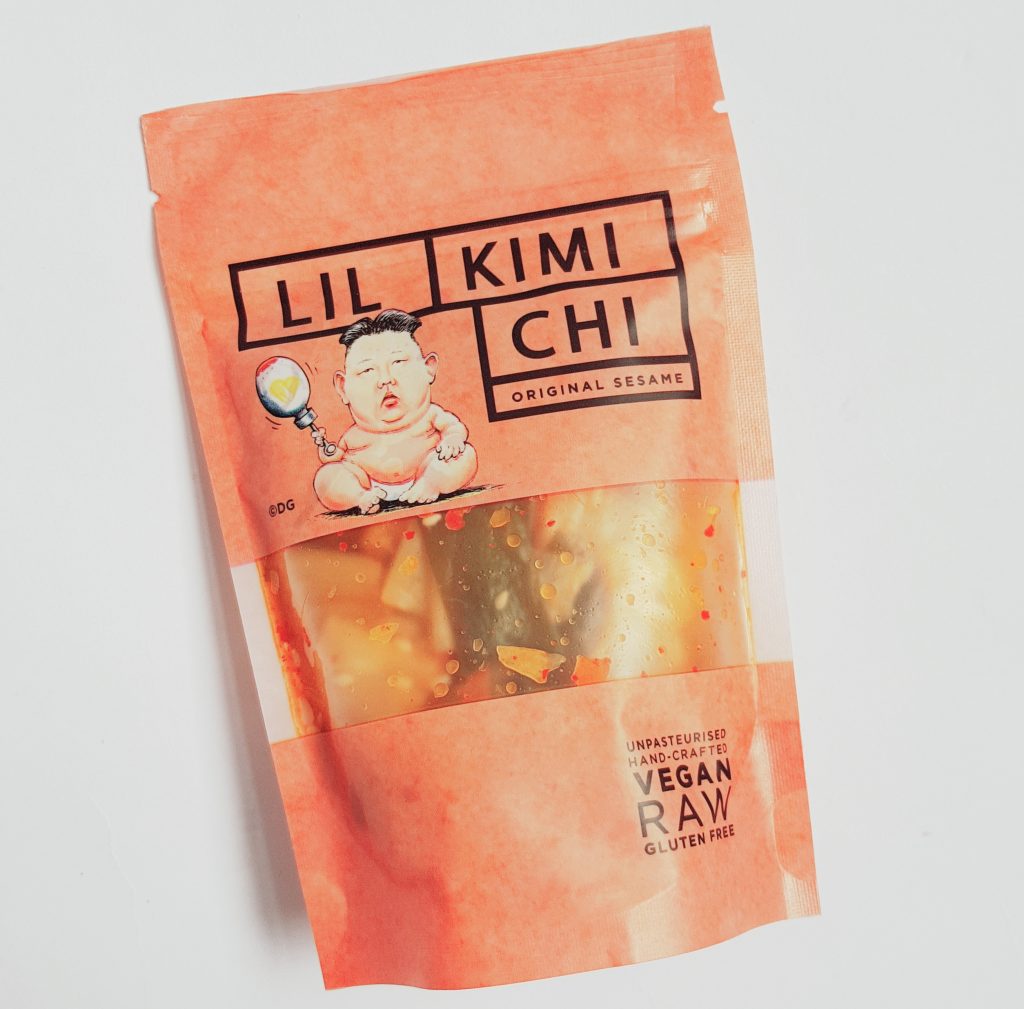 I’m excited about this Urban Fermentary Lil Kimi Chi because it’s vegan. I’m not vegan of course, far from it, but kimchi frequently contains shrimp and as I’m allergic I don’t eat kimchi. In the recipe booklet there’s a recipe for Cauliflower rice and kimchi bibimbap, which I’m planning to make. 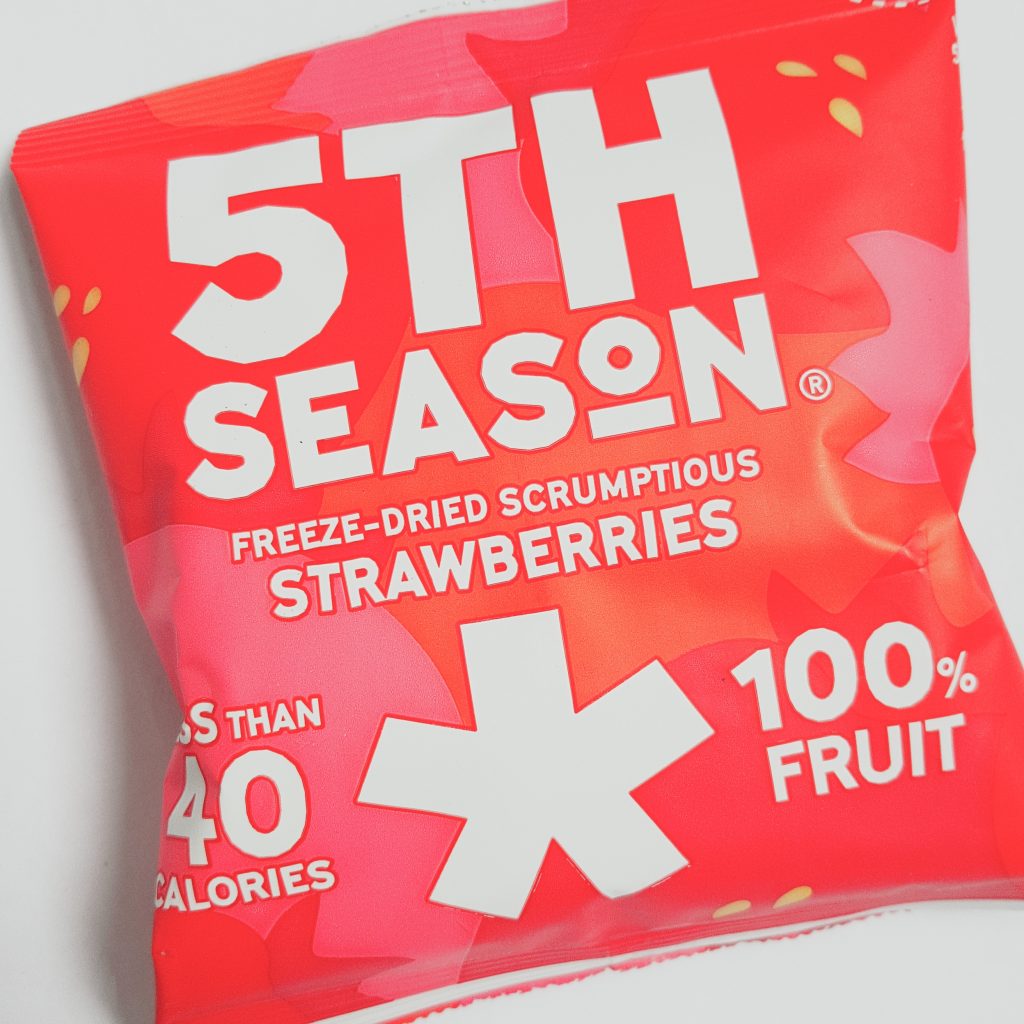 5th Season Freeze Dried Strawberries are really yummy. The drying process makes them incredibly strongly flavoured, and they are perfect for summer. They’re also a really nice addition to cookies and cakes. 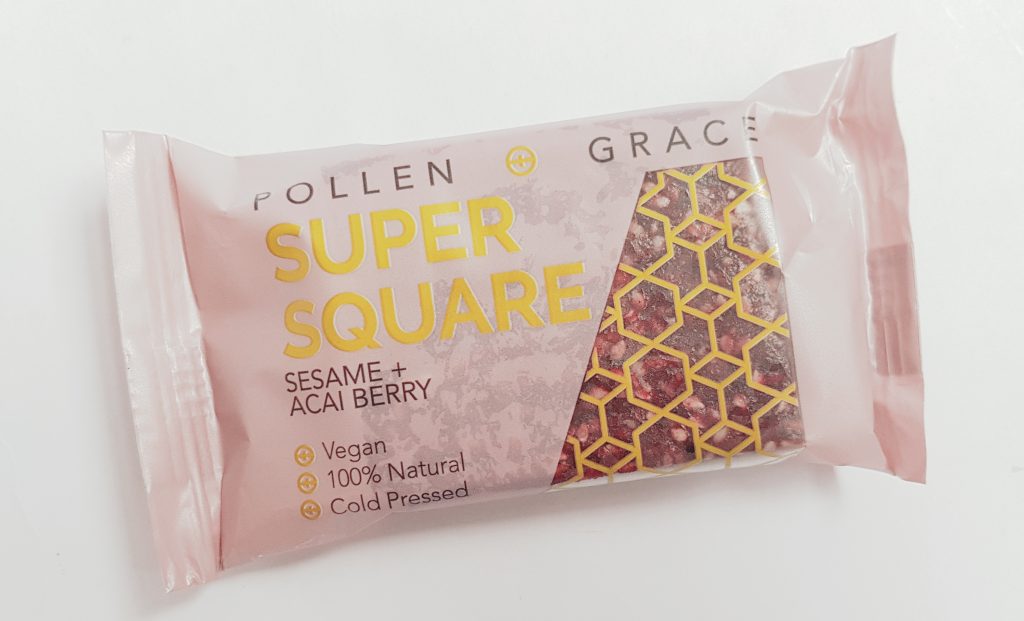 I always have snacks in my bag, and this Pollen & Grace Super Square Flapjack is nice and portable. It’s quite high in calories (220 per bar) as there’s a lot of sugar in it, but handy to have if you need a boost during a busy day. 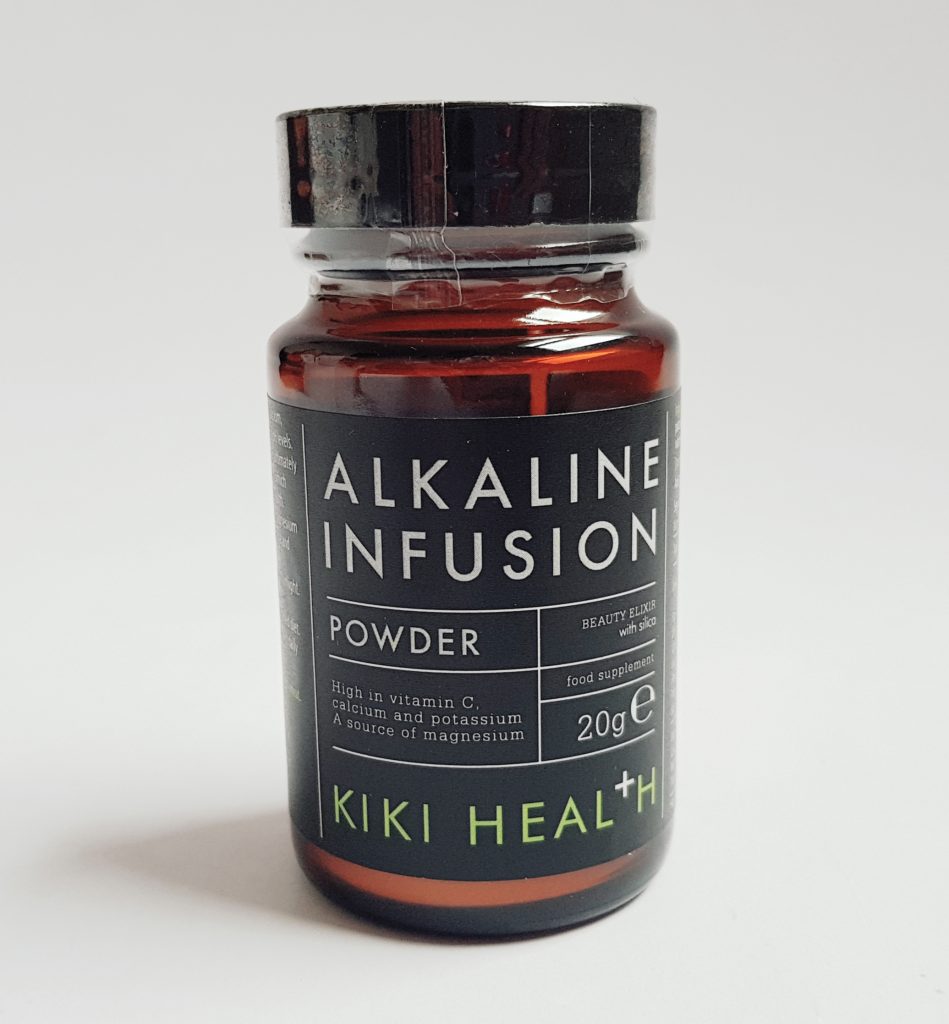 Kiki Health Alkaline Infusion is a health supplement, which contains vitamin C, magnesium, calcium, and potassium. It’s a sweet powder you add to liquid and drink either alone, or add to smoothies or other drinks. This jar contains 20g, which is two days’ supply. I think this is an interesting idea, especially as a little boost to nutritional intake. 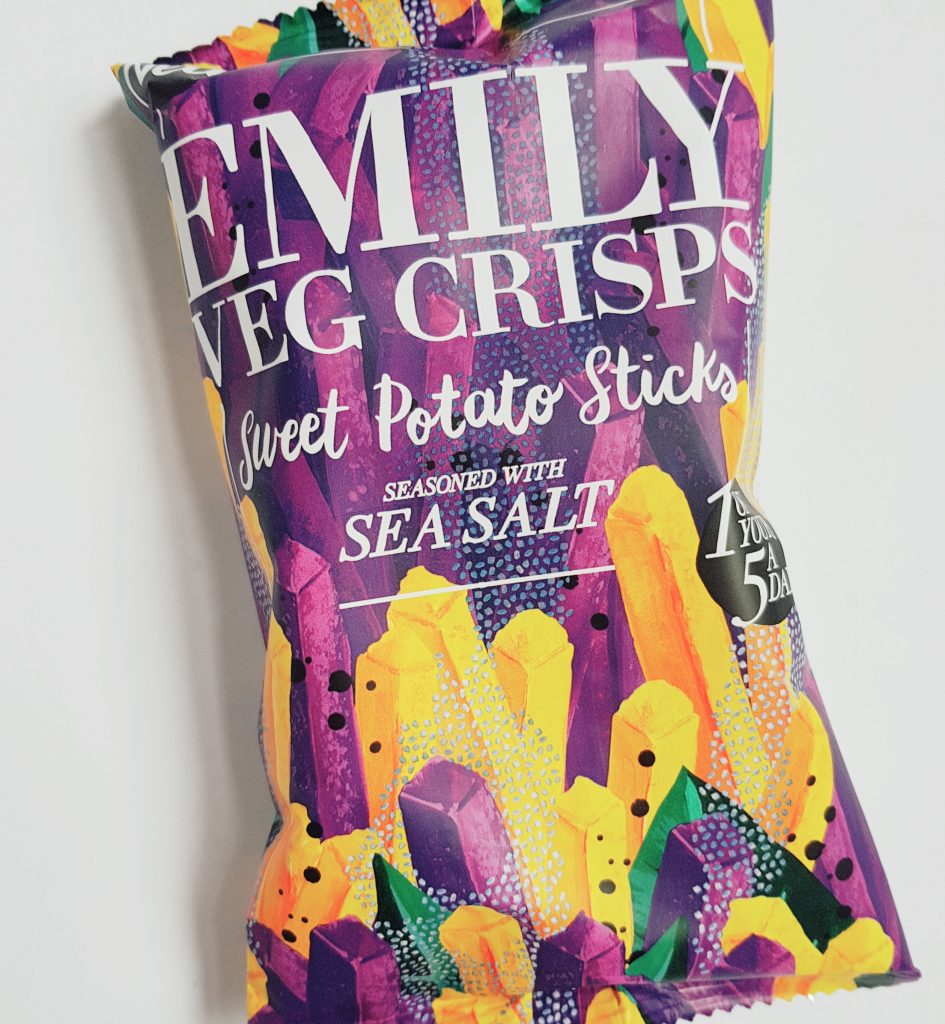 Crisps, but these Sweet Potato Sticks are a new variety for me. They’re a great alternative to regular crisps, and remind me of sweet potato chips. 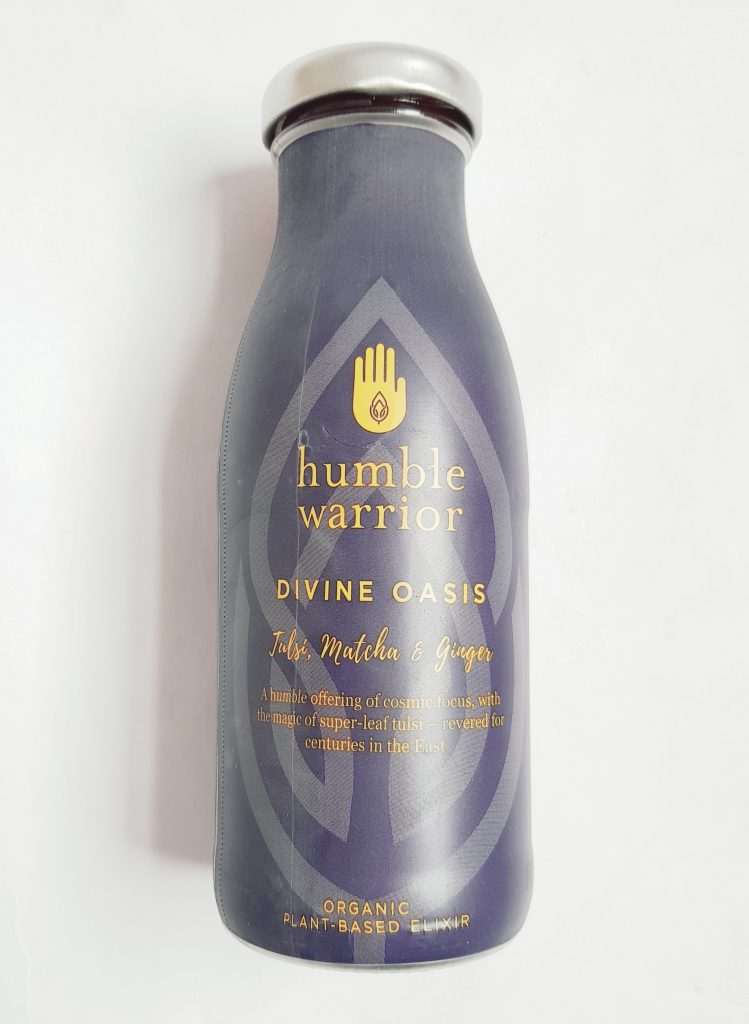 There’s a drink as well, Humble Warrior Tulsi, Matcha and Ginger Elixir. This is pleasingly low in calories (46 per bottle) and quite tasty, though I’m ignoring the slightly ridiculous description on the bottle. I can’t drink a ‘humble offering of cosmic focus’ while keeping a straight face. 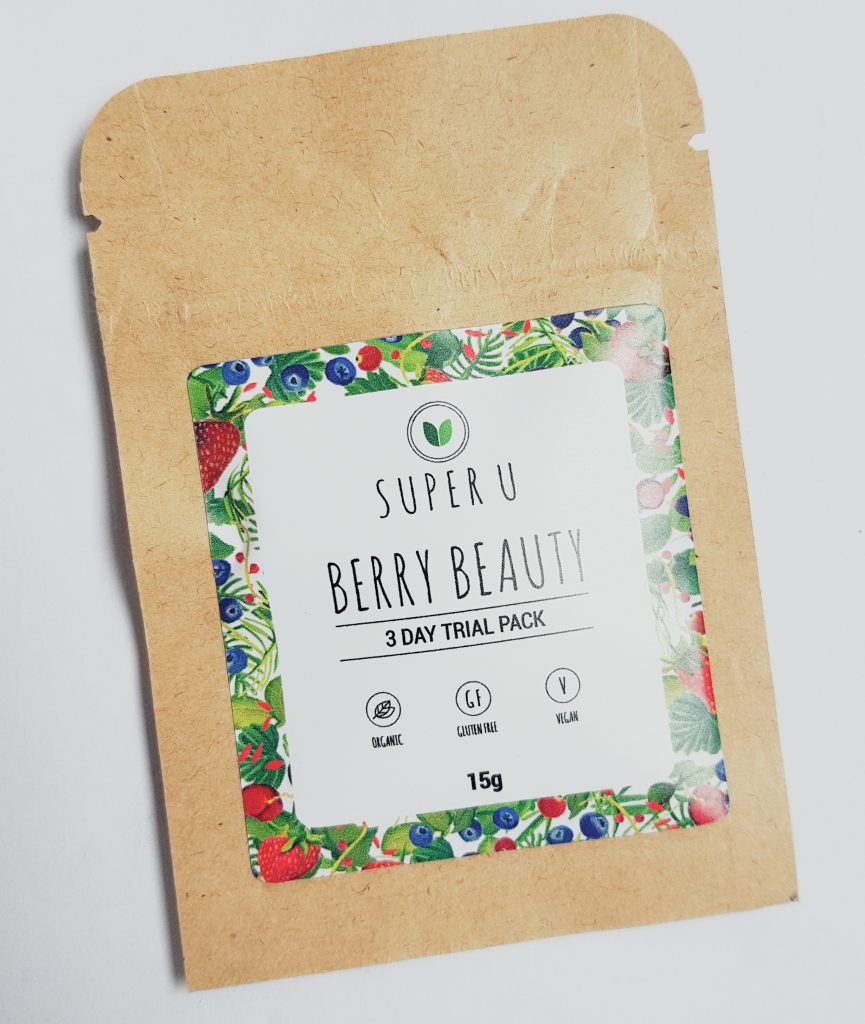 Another supplement, this time Super U Berry Superfood Blend. It’s various ‘superfood’ fruits ground up with chia seeds that can be added to added to a smoothie – there’s also a recipe in the booklet. 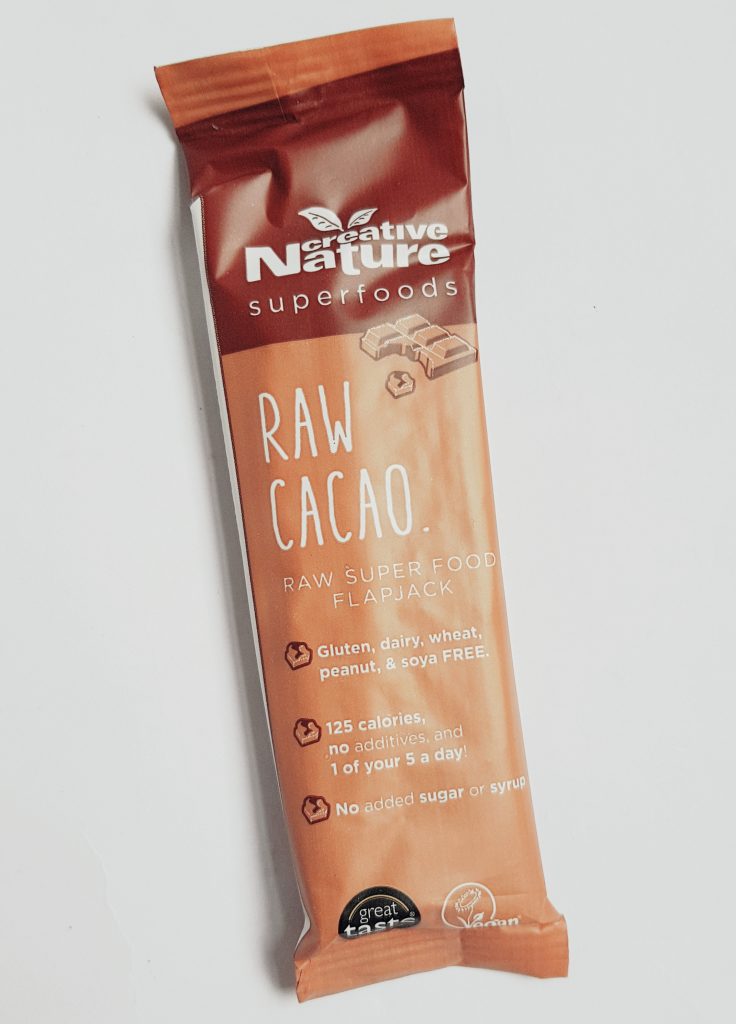 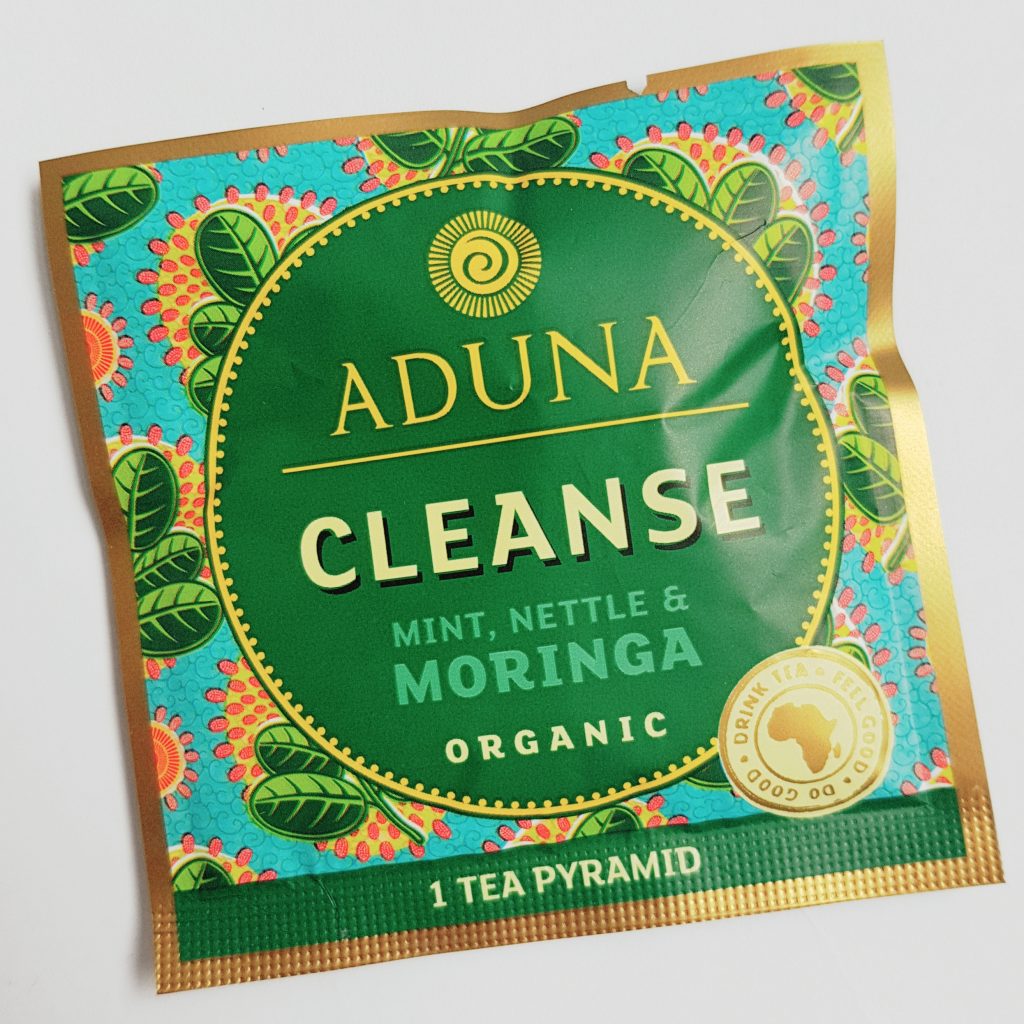 Finally, an Aduna Super Tea Pyramid. I’m not the greatest fan of herbal tea (no caffeine) but I do like an occasional mint tea after overindulging!

This is a pleasingly varied selection of healthy snacks and supplements.

I love the addition of a recipe booklet, it’s a wonderful bonus. The supplements I’ll find very useful to add to my regular protein shakes. My husband loves the chocolate too!

On the subject of protein though, my one minor issue is that the snacks, while delicious and useful, are pretty high on the carbs and low on protein. This is more a personal thing than anything else because I lift, so I try to keep my protein intake fairly high.

That being said, I really like the variety. The powders are all a great addition to my protein shakes. Everything is as natural and unprocessed as possible, and still manage to feel like treats. I’m particularly pleased with the kimchi & recipe because I know it’s safe for me to eat, and I’ve been dying to try bibimbap!

‘Healthy’ treats are generally more expensive than processed rubbish, so this isn’t a budget option. However the value of this box is pretty good. I’ve checked the prices of all the individual items, and the total is more than the price of the box. It’s not hugely different, but the difference is certainly more than enough to make this worthwhile.

This is a great way to try some tasty treats which are healthy and natural, and support a healthy lifestyle!

How would you rate LifeBox ?