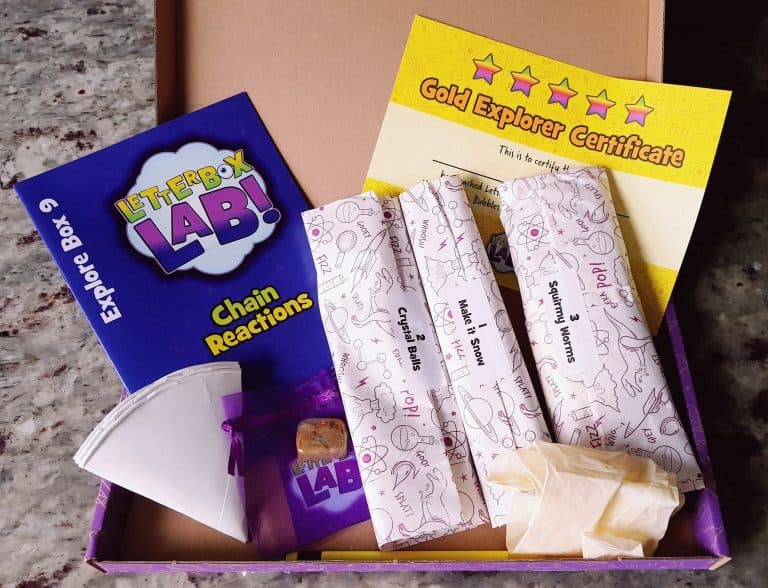 Letterbox Lab provide innovative children’s science kits as subscription boxes.
The Explore Box (£8 + £2 postage) is for kids aged 6+ and contains a least an hour’s worth of fun science.The Investigate Box (£22 + £2 postage) has more experiments and more items of collectible lab equipment with enough to keep a junior scientist busy for 3 or 4 hours.

My lovely helper is my daughter, Little C, age seven. I was sent an Explore Box, which is perfectly designed for her age group. 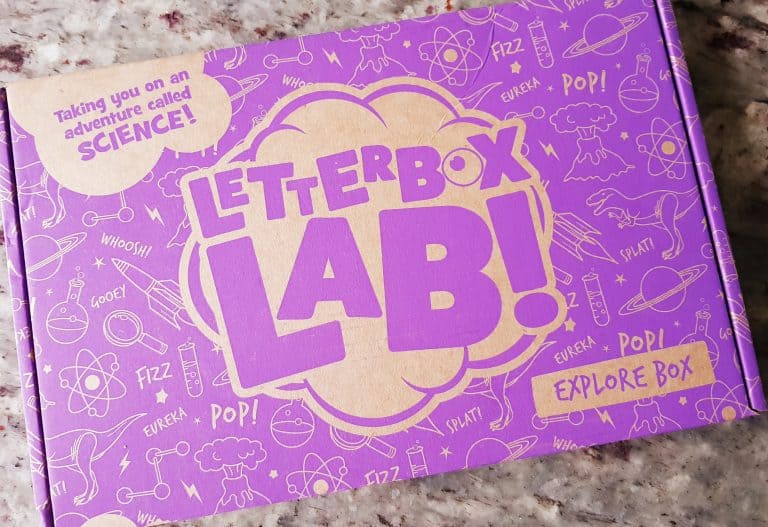 The box comes right through the mailbox!

This month’s theme is Chain Reactions. It looks like it’s going to rate pretty high on the mess scale! 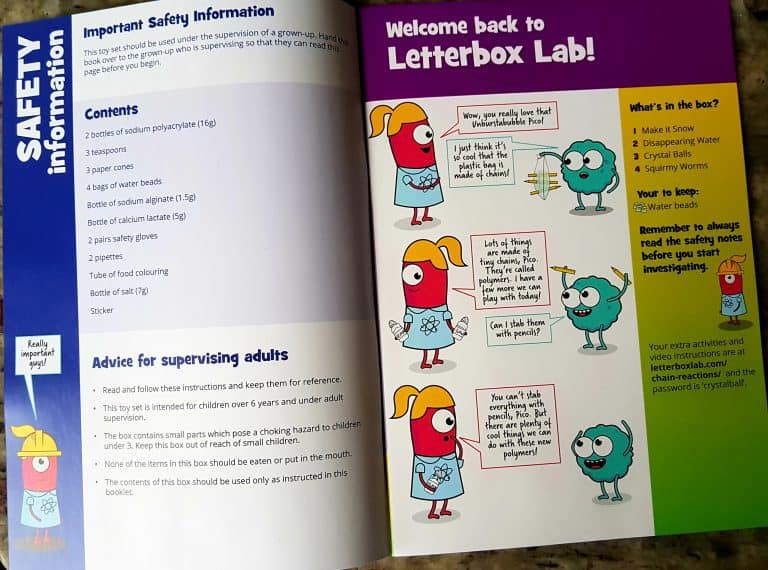 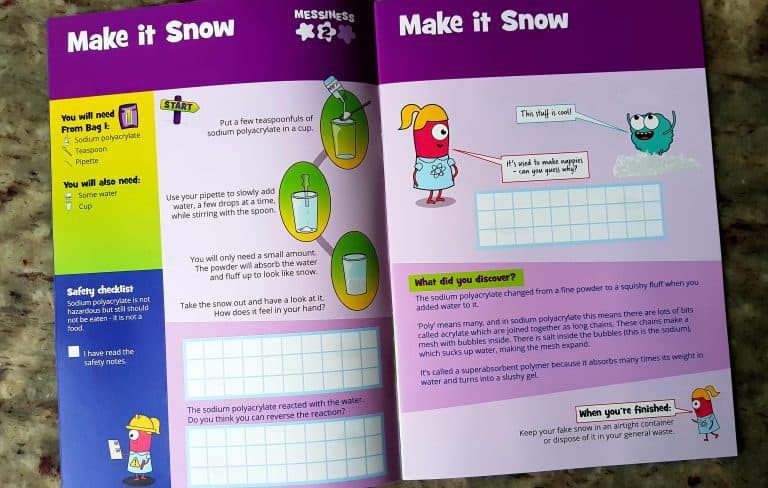 The first activity was Make It Snow. 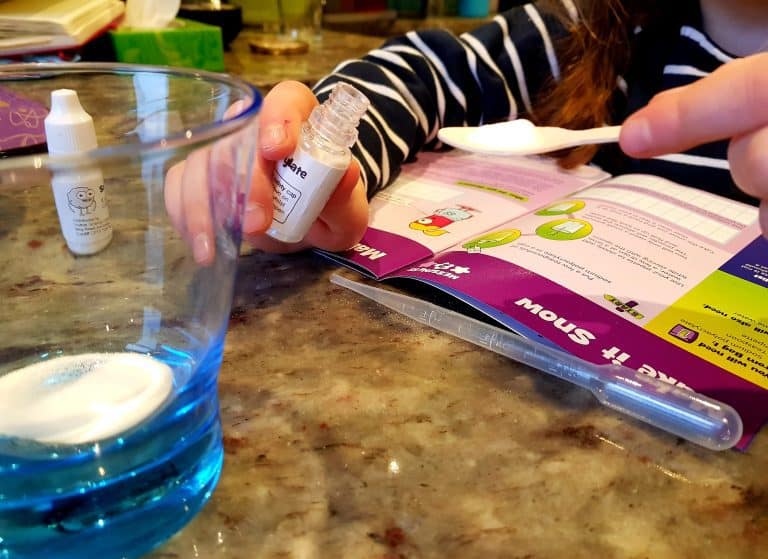 This was what the sodium polyacrylate looked like when we put it in the glass. 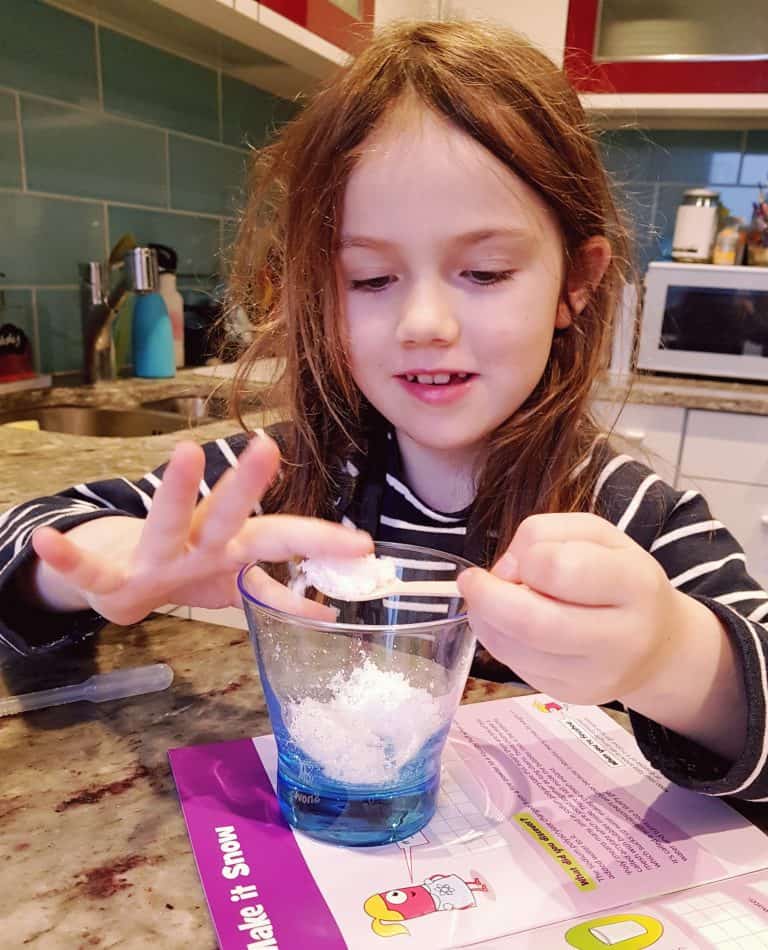 And this is what it looked like after we added the water! Snow! It really is remarkably convincing, and of course very seasonal. 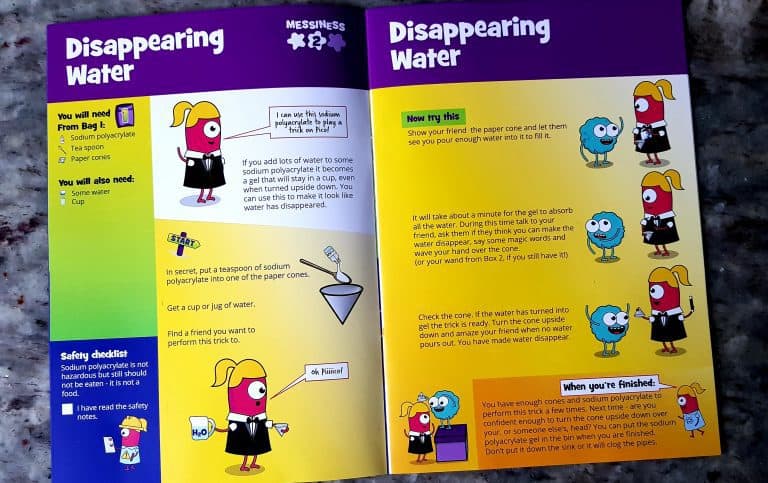 The next activity was something of a magic trick: Disappearing Water!

While we didn’t have a handy friend around to trick, the experiment was still great fun. 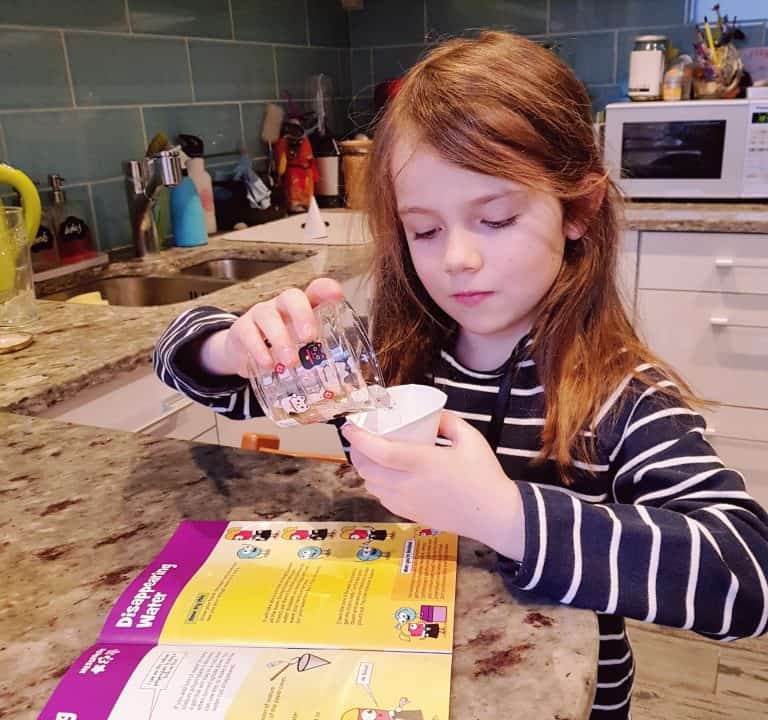 A little spoon of sodium polyacrylate went into the cone, and the water was added, more this time. 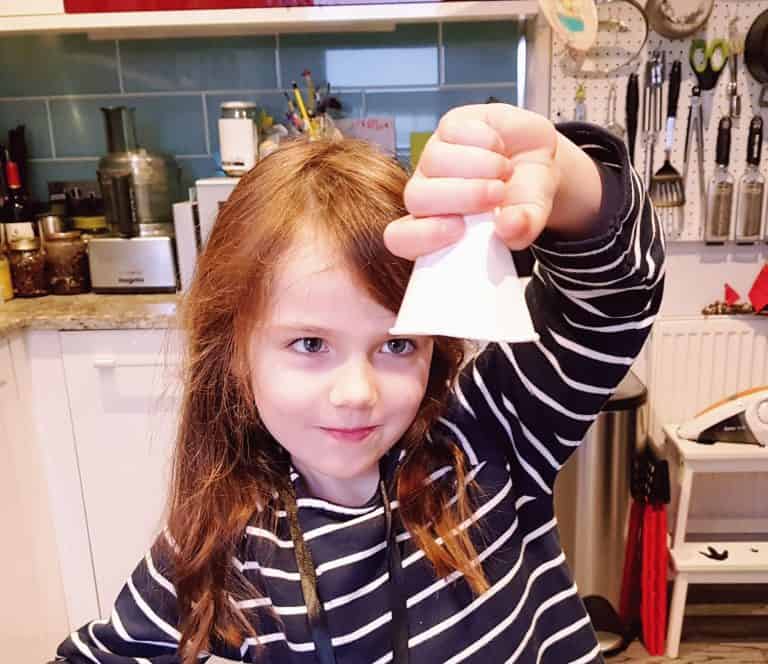 As it said in the instructions, after about a minute a gel had formed that,while it was kind of soft,totally stayed in the cone when turned upside down!

The last two projects, Crystal Balls and Squirmy Worms, were both in two stages. 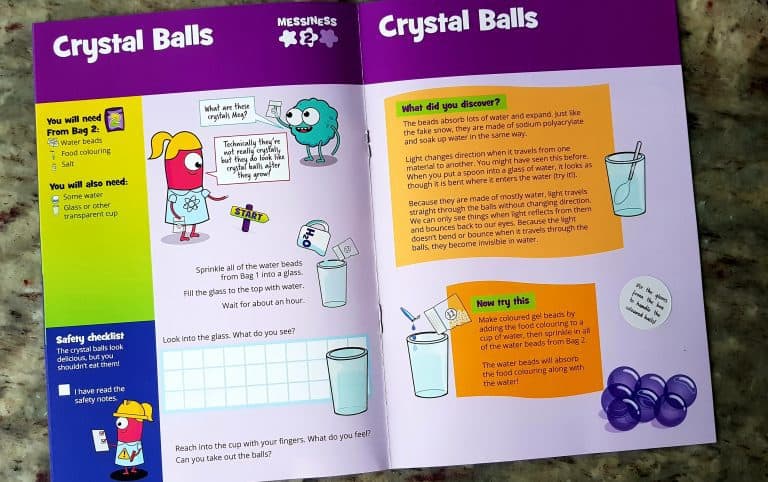 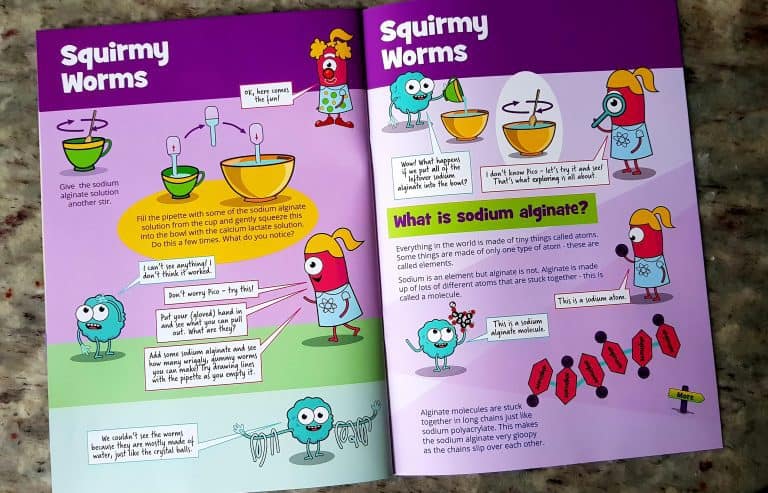 We started preparing the Crystal Balls. 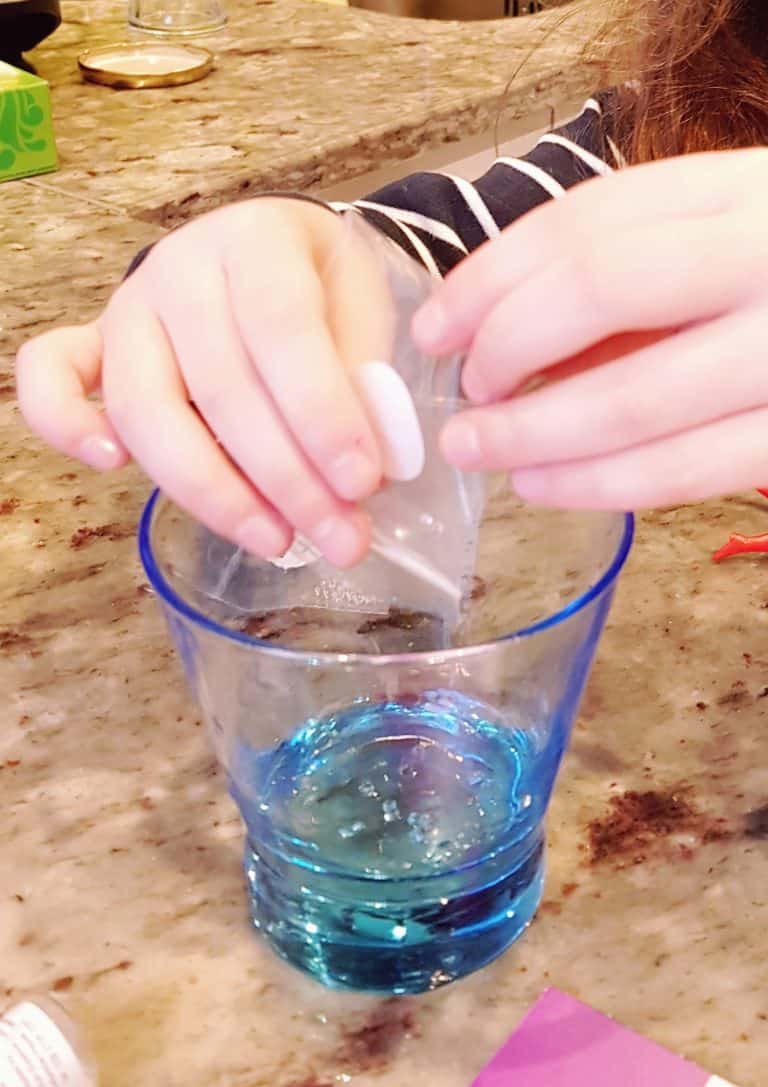 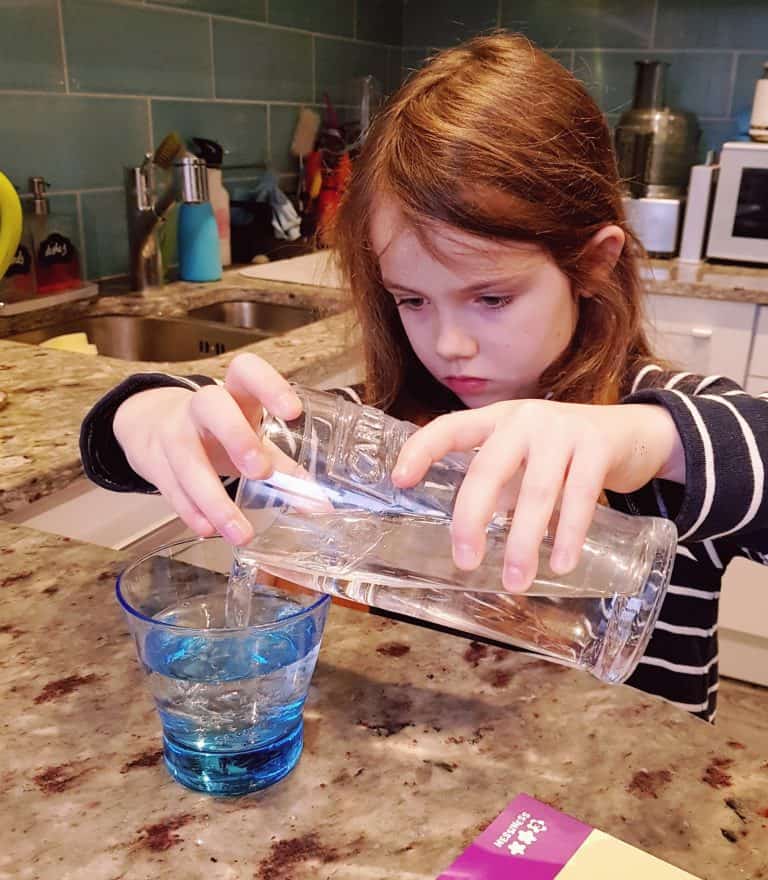 The tiny beads went into a glass, and then water was added. 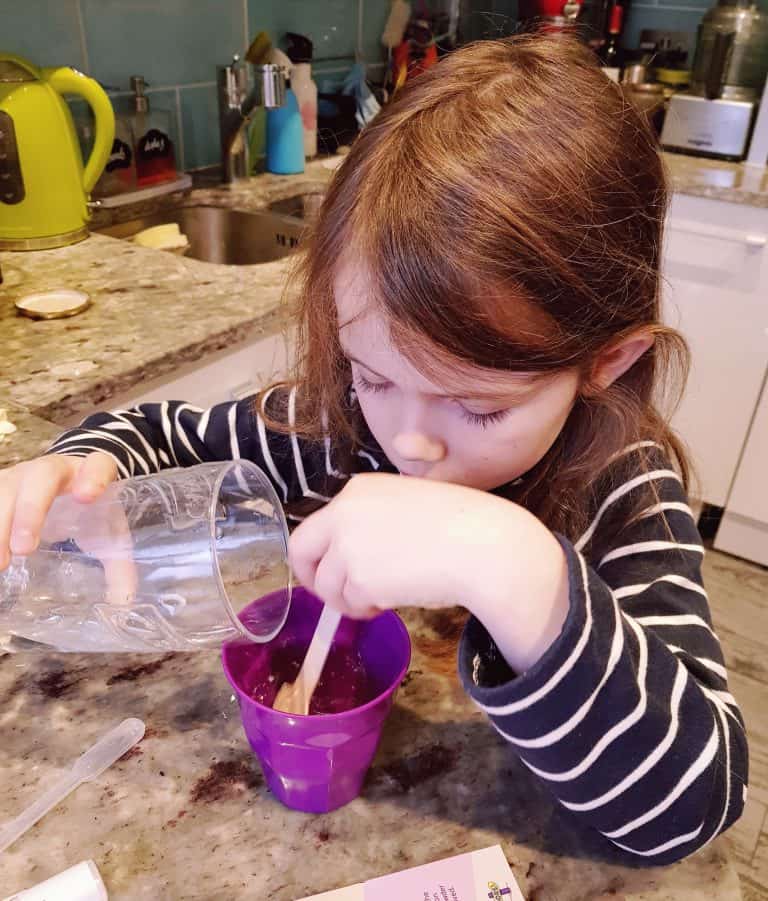 For Squirmy Worms we had to mix sodium alginate with water to make a sludge.

Both of these things had to be left for at least an hour. 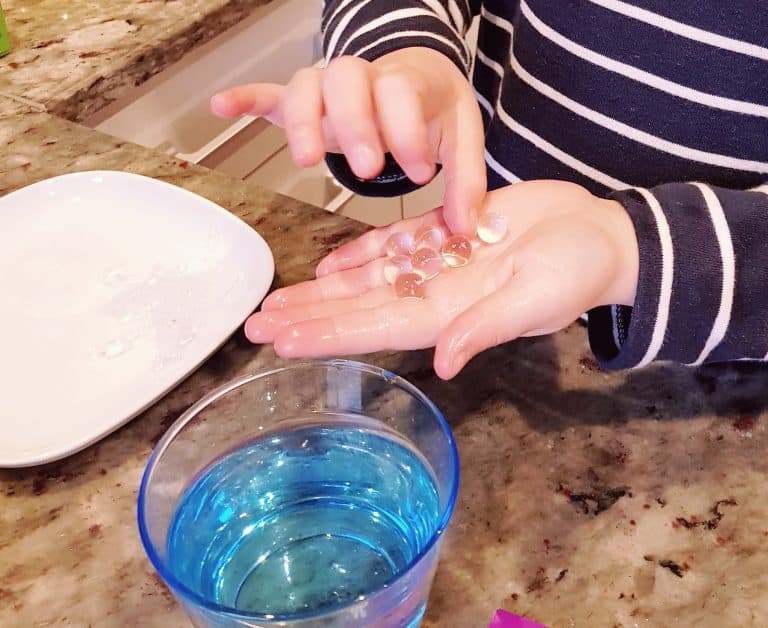 Look at the water beads now! They are like little soft crystal balls. It’s amazing that each one was about the size of the head of a pin, and yet now they are so much bigger!

We also tried it with the food colouring. 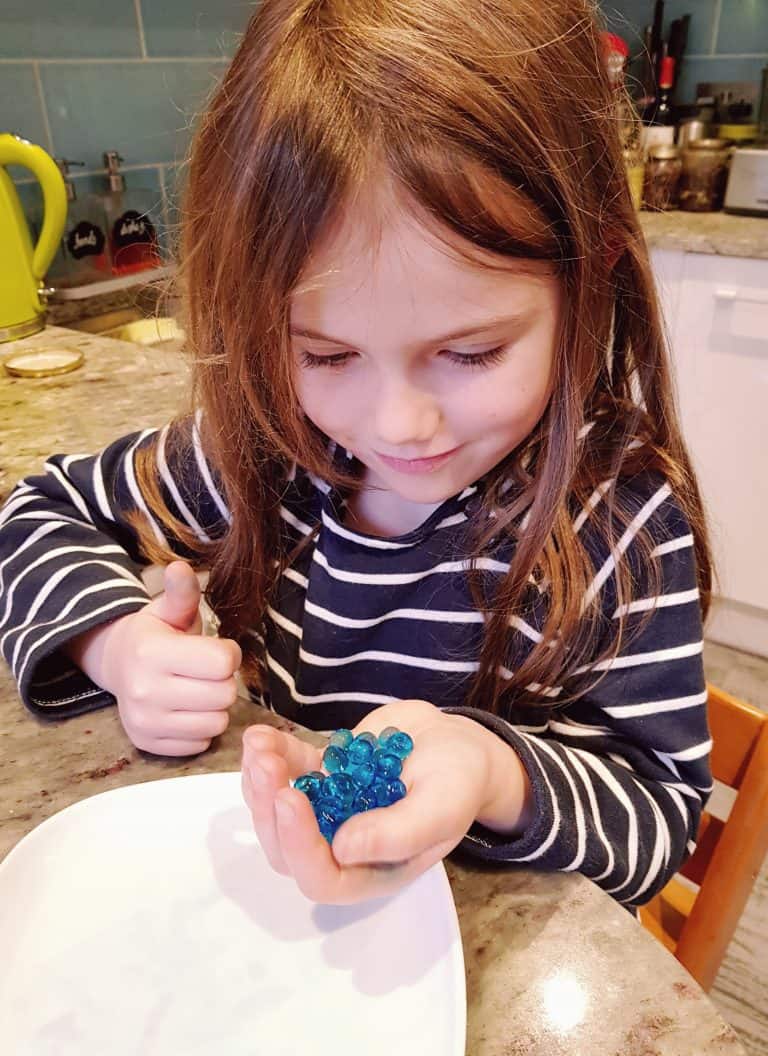 These looked even more beautiful. 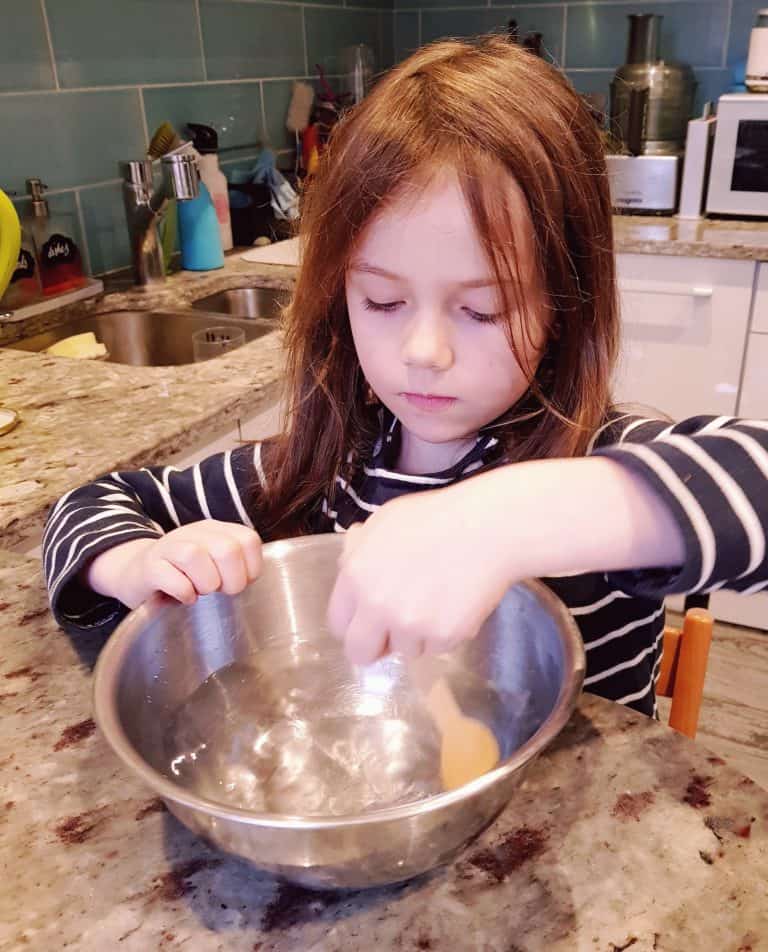 The Squidgy Worms were next. We mixed up the calcium lactate in a big bowl of water. 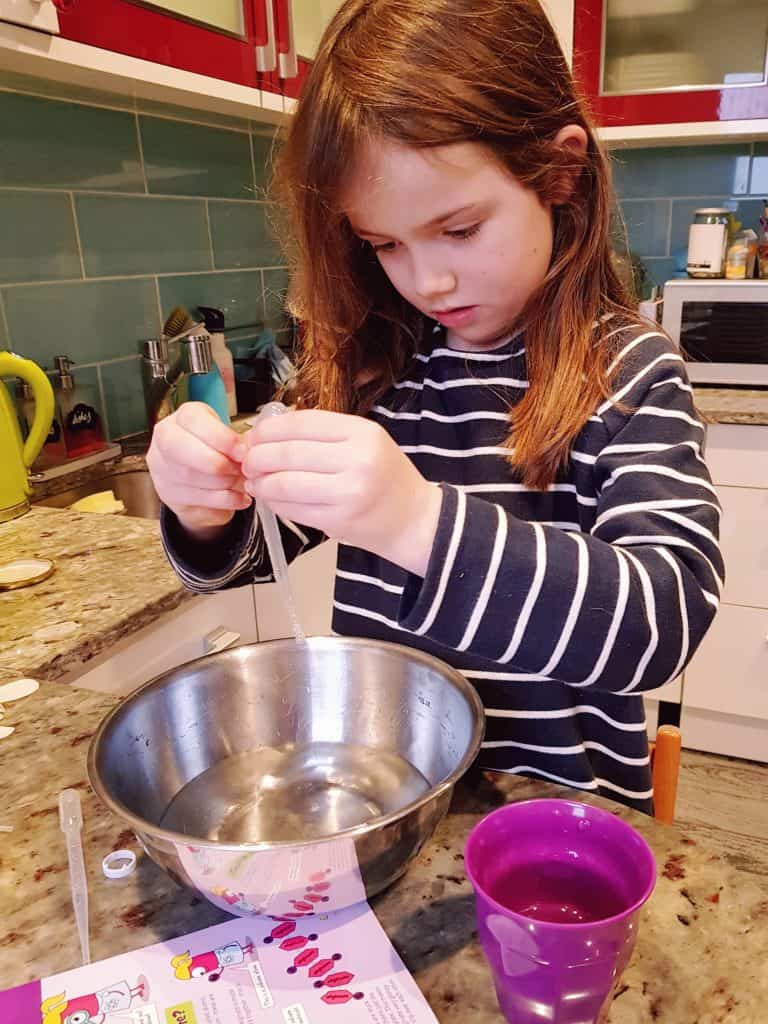 Then used the pipette to dribble the sludge into it. 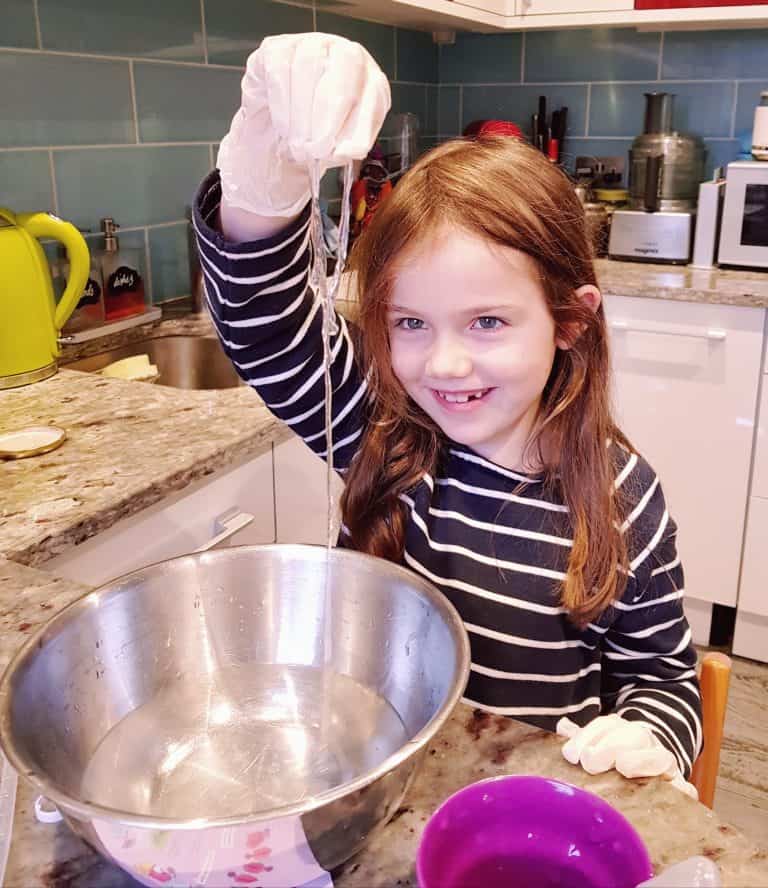 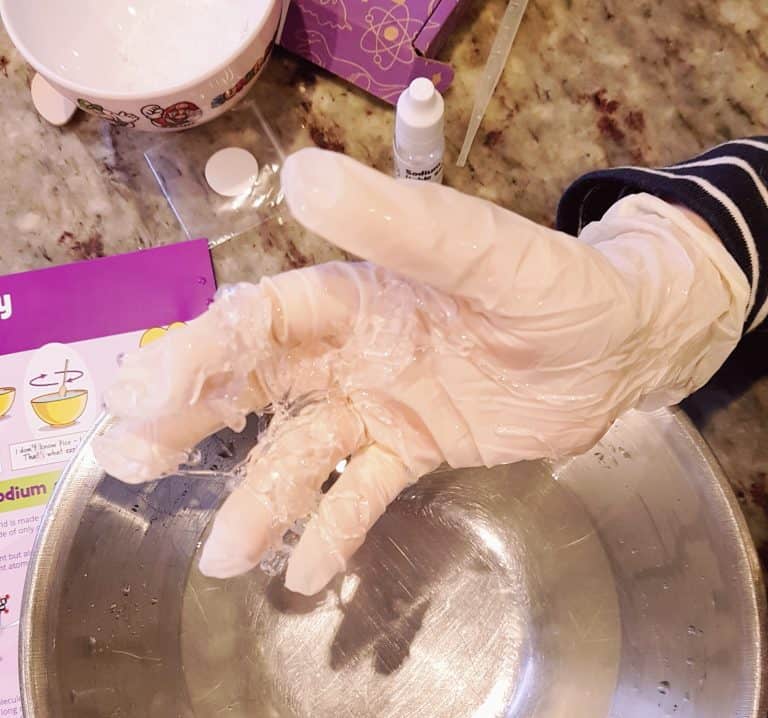 Well, this was an extremely satisfying box. Really hands-on, and tremendous fun.

Little C’s favourite was definitely the Worms, she spend ages squishing and playing with them. The Crystal Balls came a close second!

A small but much appreciated detail was that the gloves included in the box were small enough to fit a child!

As to the actual ‘science’ portion, I think that realistically polymers a tiny bit too complicated for your average young child to understand. However they can certainly understand the principle of something absorbing water and getting bigger, and also discover that calcium is in your bones and teeth!

I don’t think it matters that Little C didn’t get the finer scientific points, she had an enormous amount of fun, and it’s certainly not something that  could be easily put together by me! I’ll just assume that when she gets onto studying this at school that she’ll remember making the crazy worms and water beads, so she will have had a little bit of experience of the result.

We though this was one of the best boxes from Letterbox Lab, not least because there was so much messy fun involved! 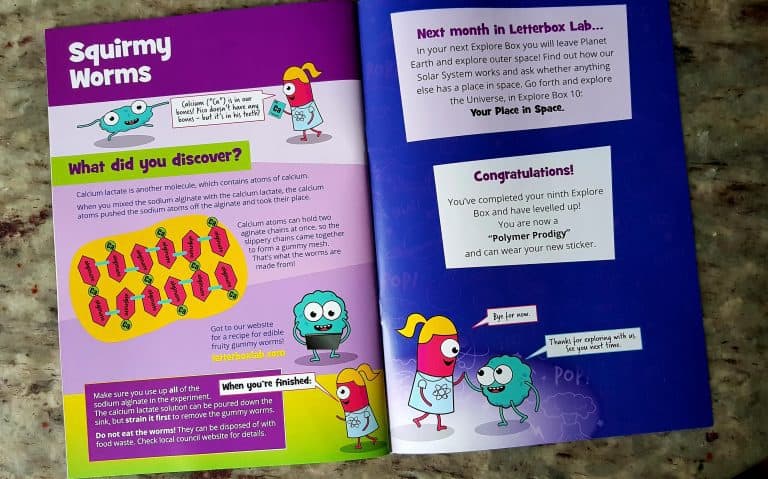