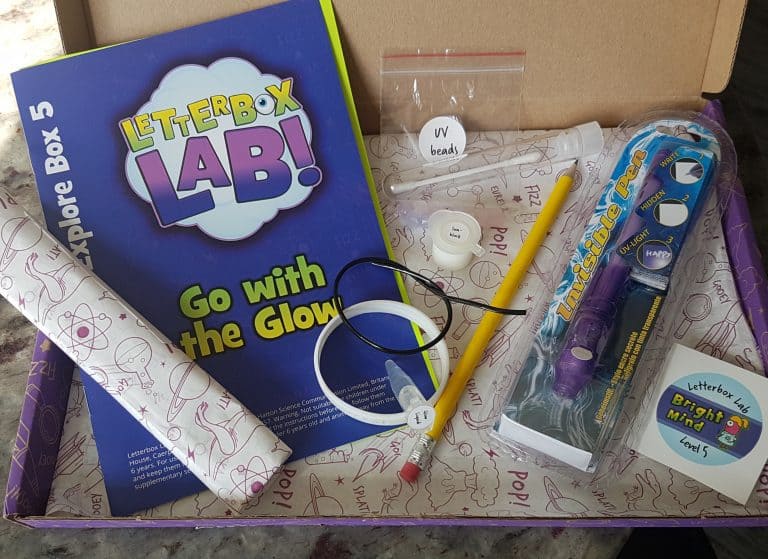 My lovely helper is my daughter, Little C, age six. I was sent an Explore Box, which is perfectly designed for her age group. 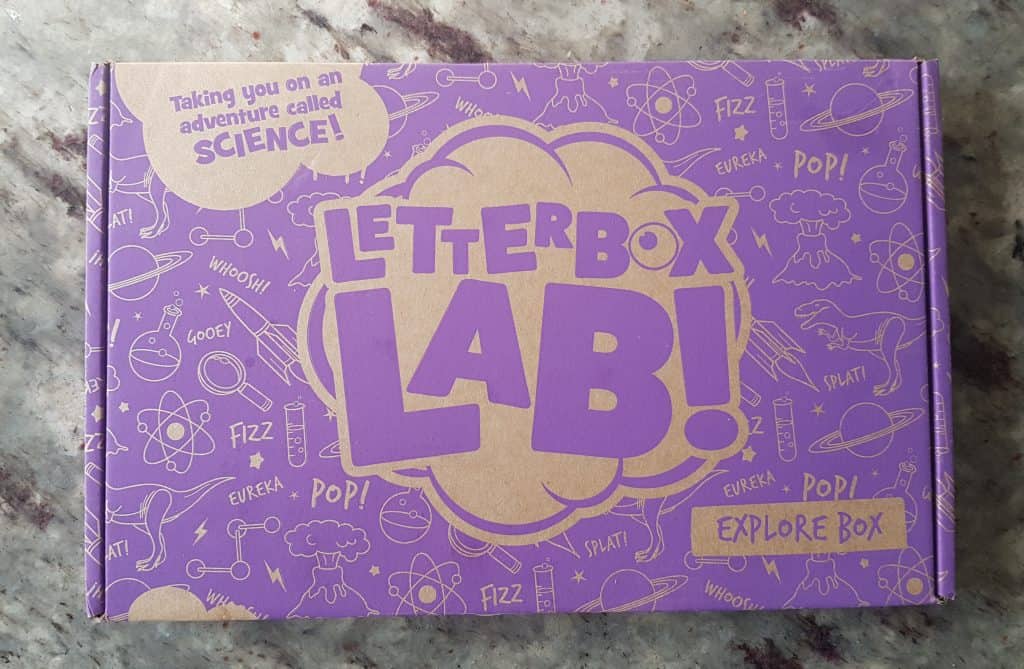 There is bonus trivia on the box! 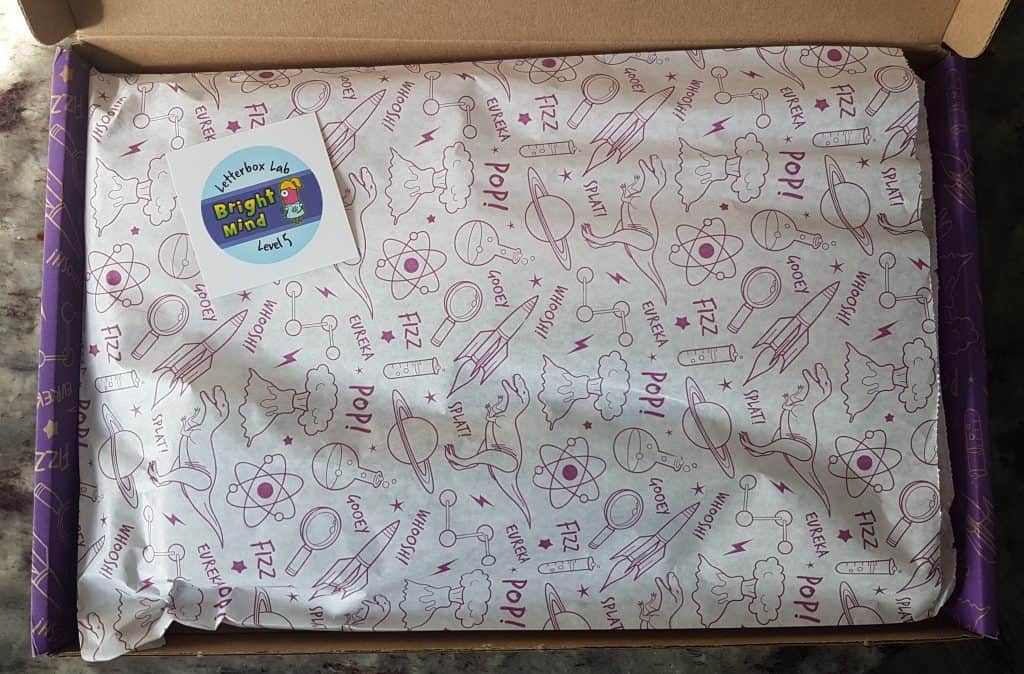 This is what we saw when the box was opened up.

As it turned out, there were quite a few things in the bag, and the booklet was underneath. 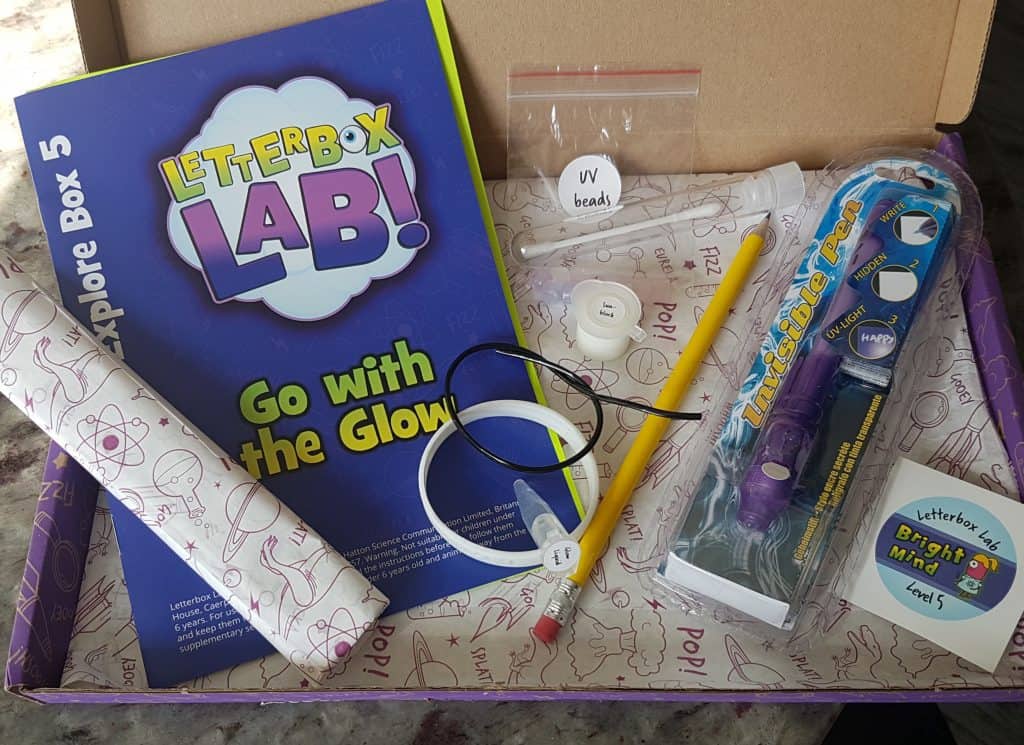 There is definitely some fun looking stuff in there!

First of all, we needed to check out the instructions. 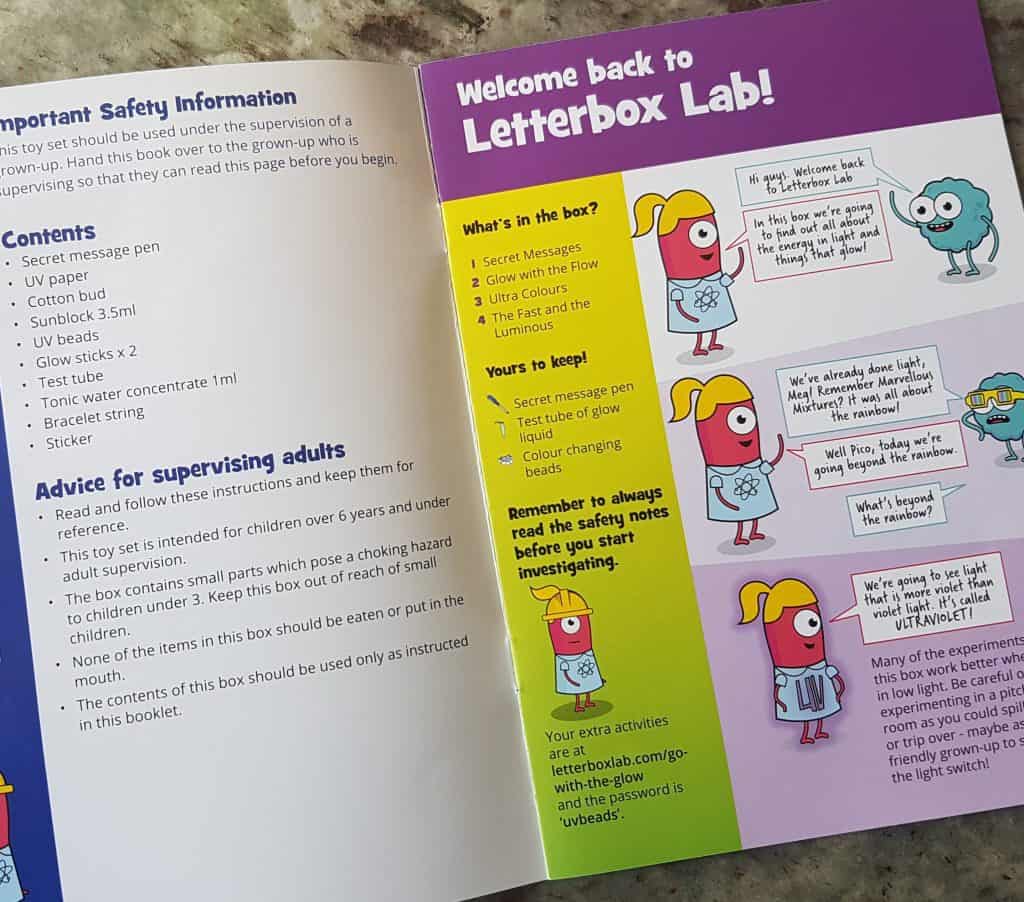 This box is all about ultraviolet light! 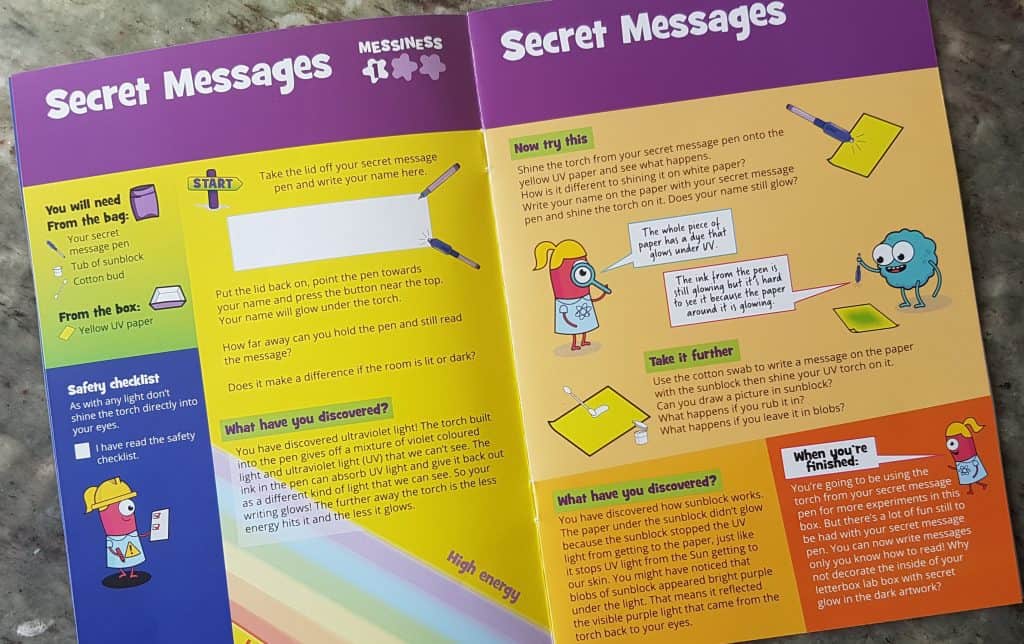 The first experiment was using the ultraviolet ink pen that was included in the box.

These are such cool things. They’ve been around for years (I think I had one as a child) but they never stop being fun to play with. 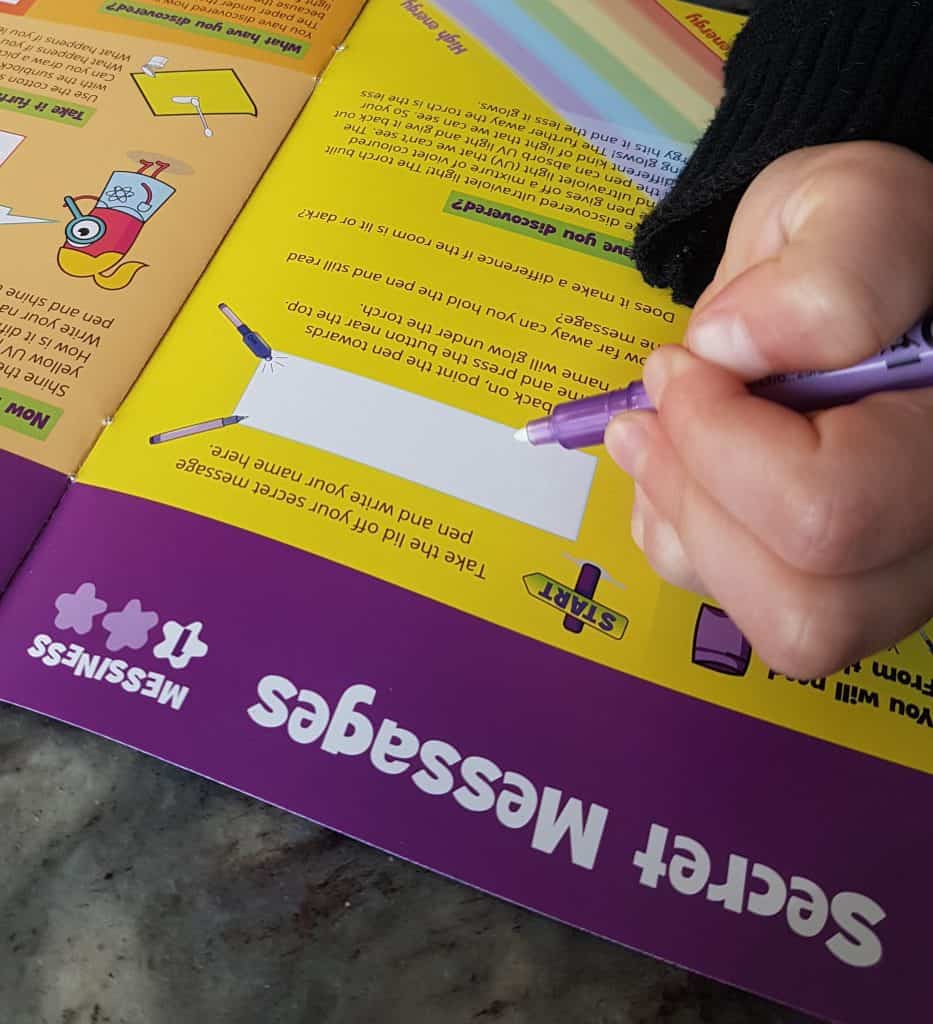 It was recommended to perform the experiments in a dim place, so we headed to Little C’s room, which has blackout blinds. 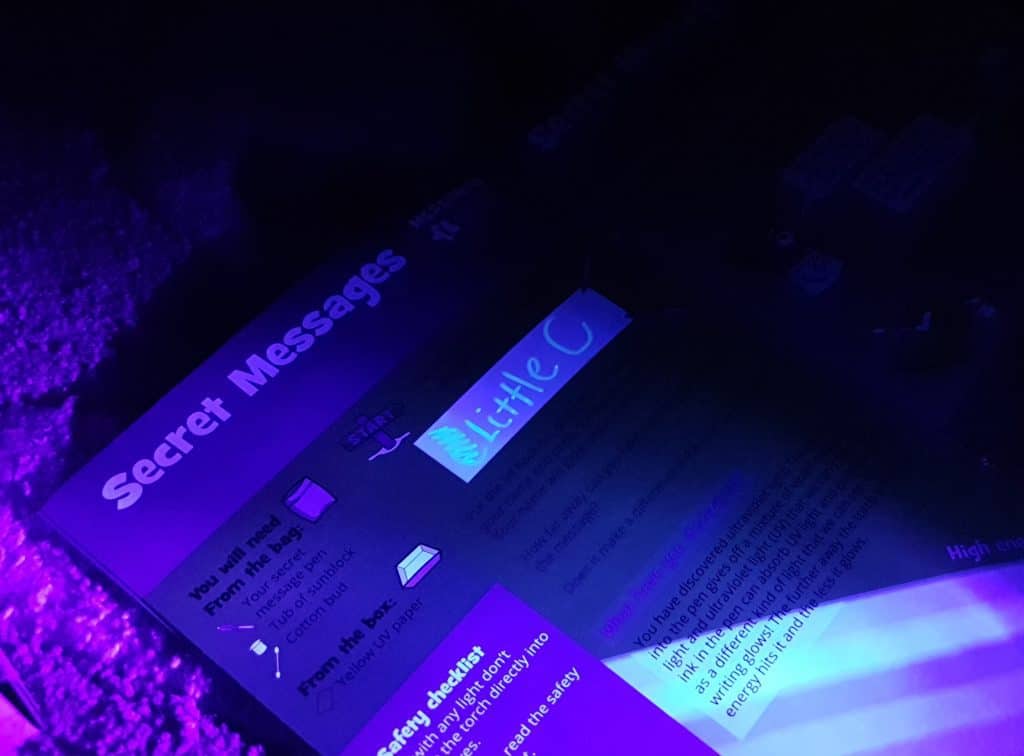 Next we tried the sun cream experiment.

First, we shone the light on the UV ink-treated paper. 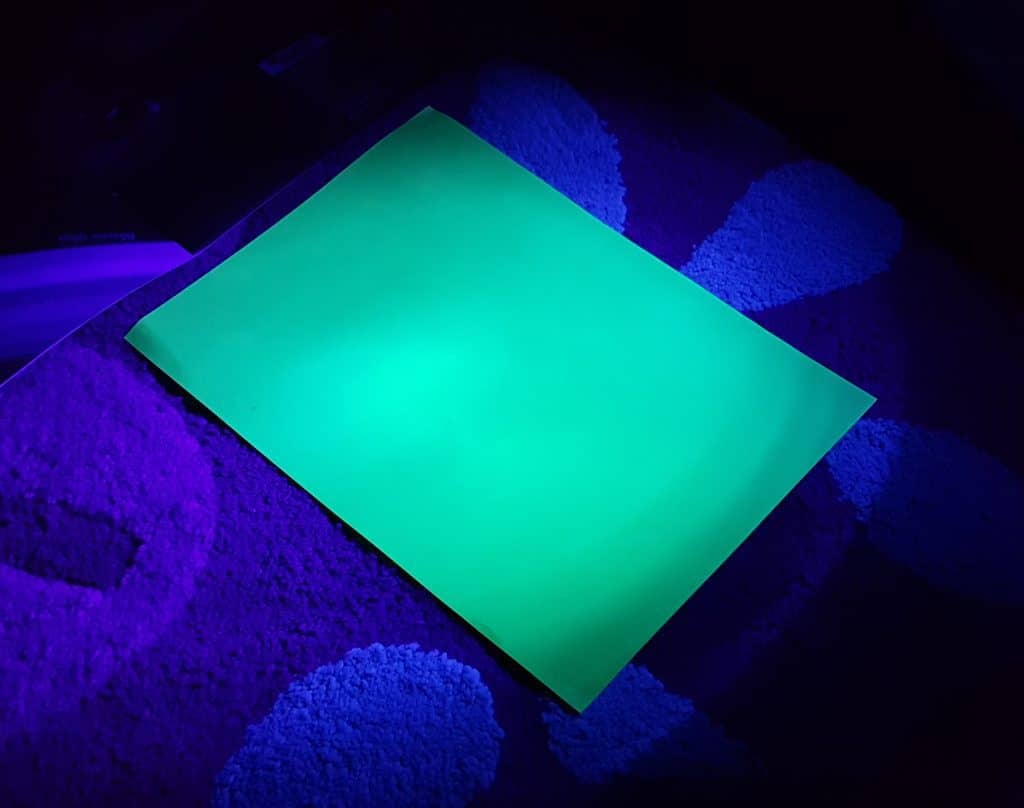 Writing with the UV pen didn’t do much of anything.

But then, we tried writing using the sun cream. 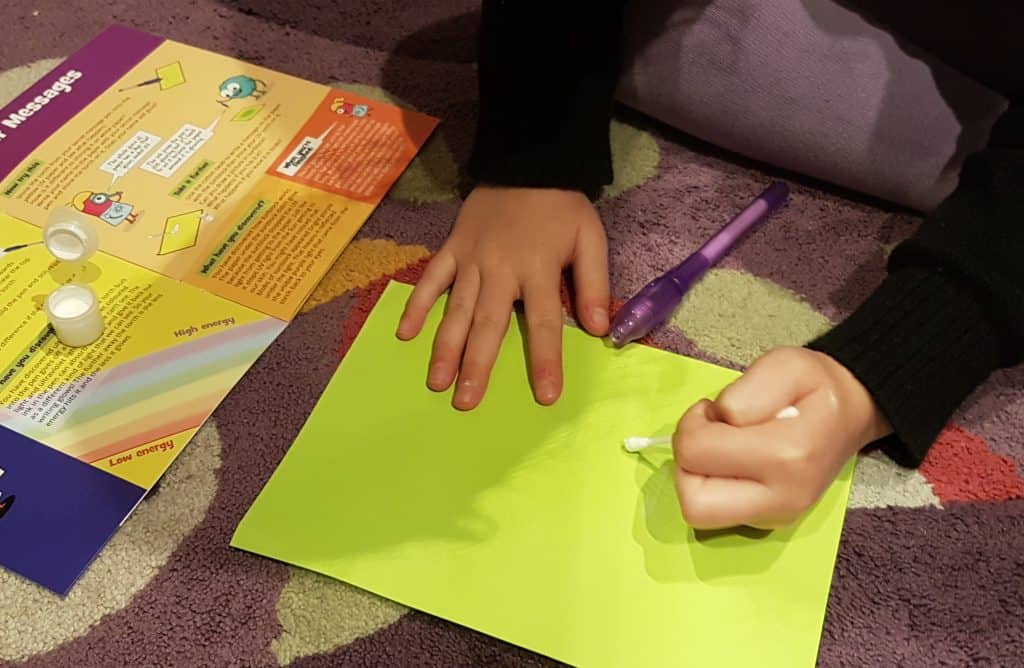 It was slightly tricky writing with a cotton bud, but it had the useful effect of producing both blobs and thinner amounts of cream. 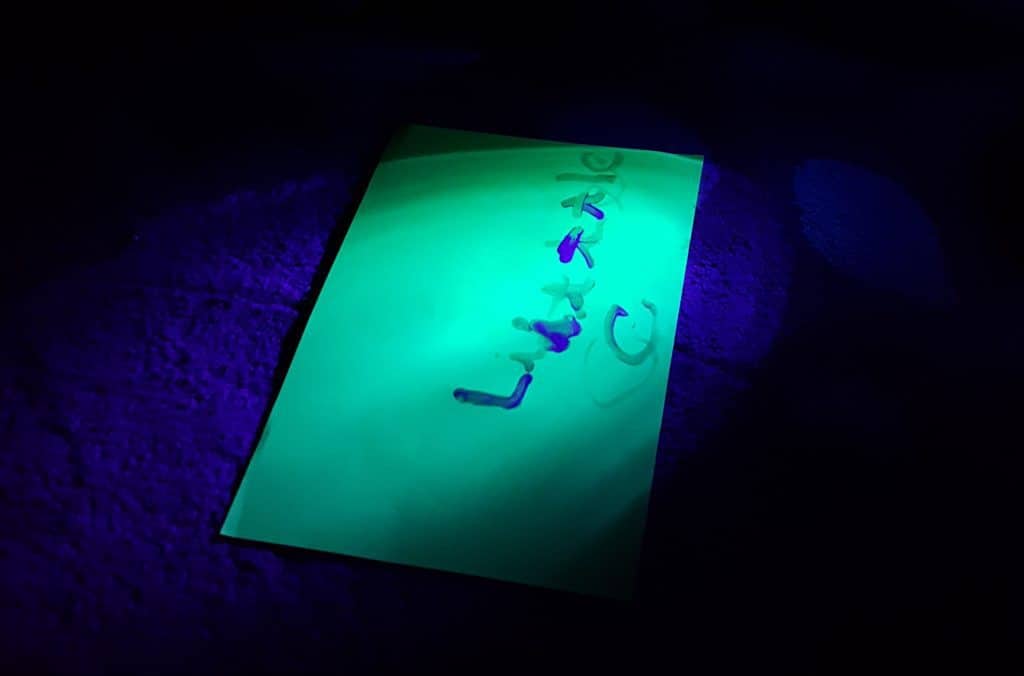 Next up was making our own glowing liquid. 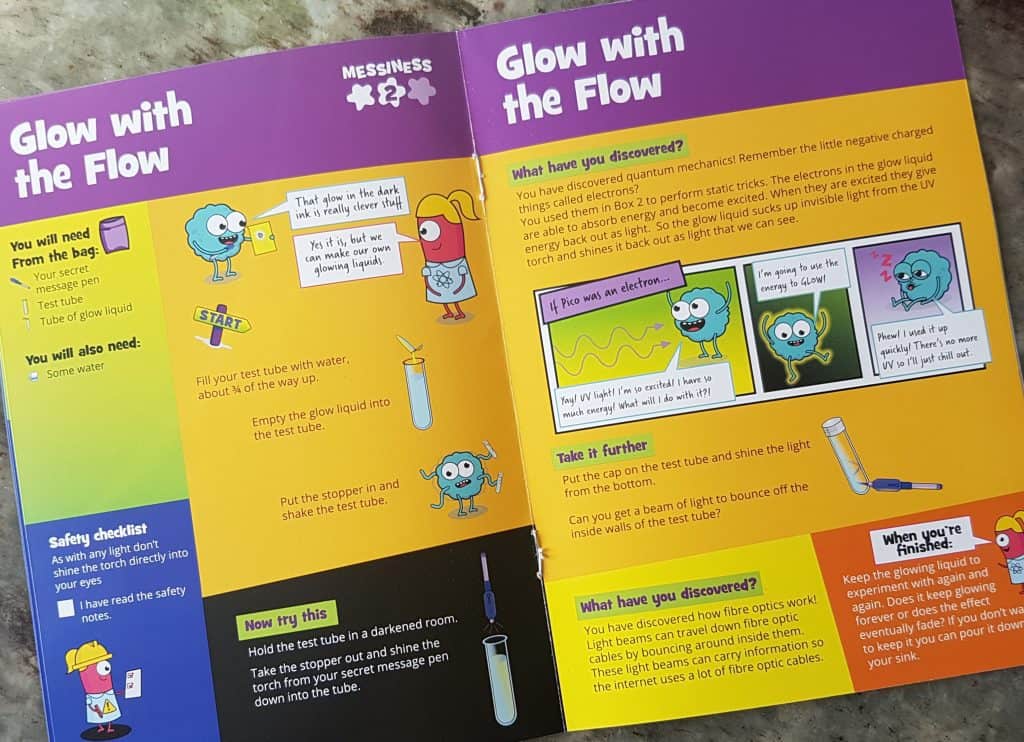 We added the glow liquid to water in the test tube. 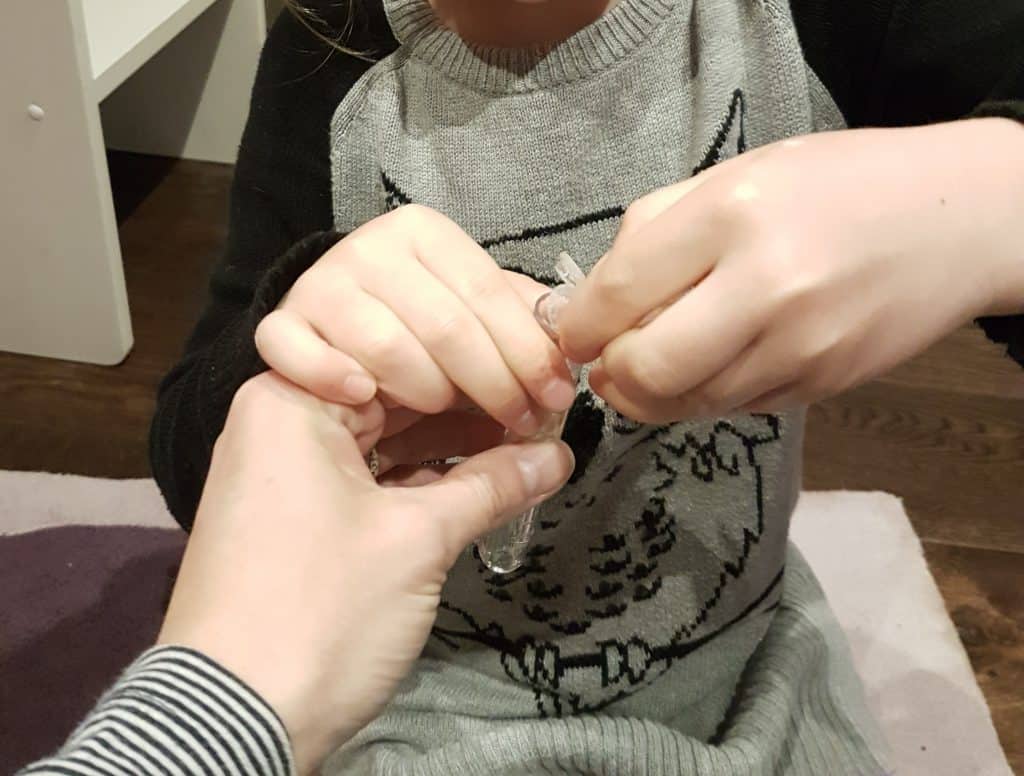 Now it’s time to break out the UV light again. 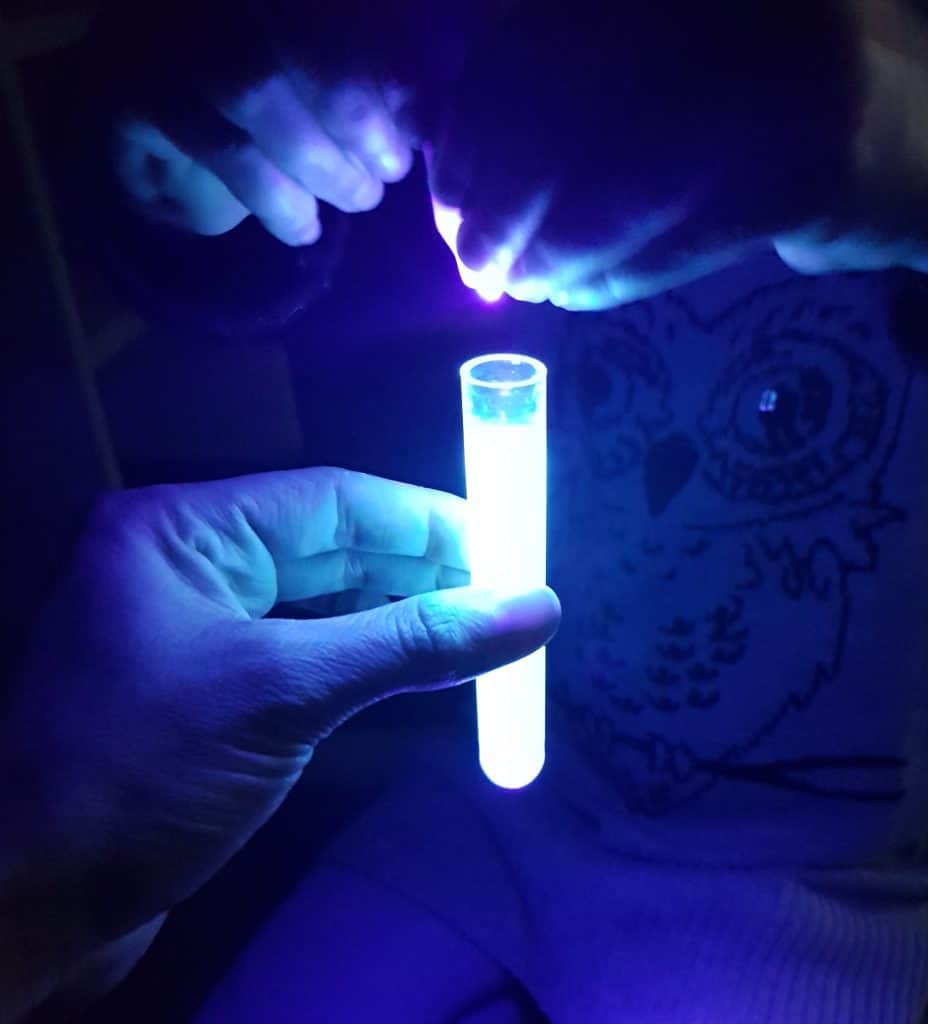 So cool! Look at that glow!

We also tried to make the beam bounce off the walls of the test tube.

This was very tricky, because it required extremely steady hands, but I managed to (sort of) get a picture. 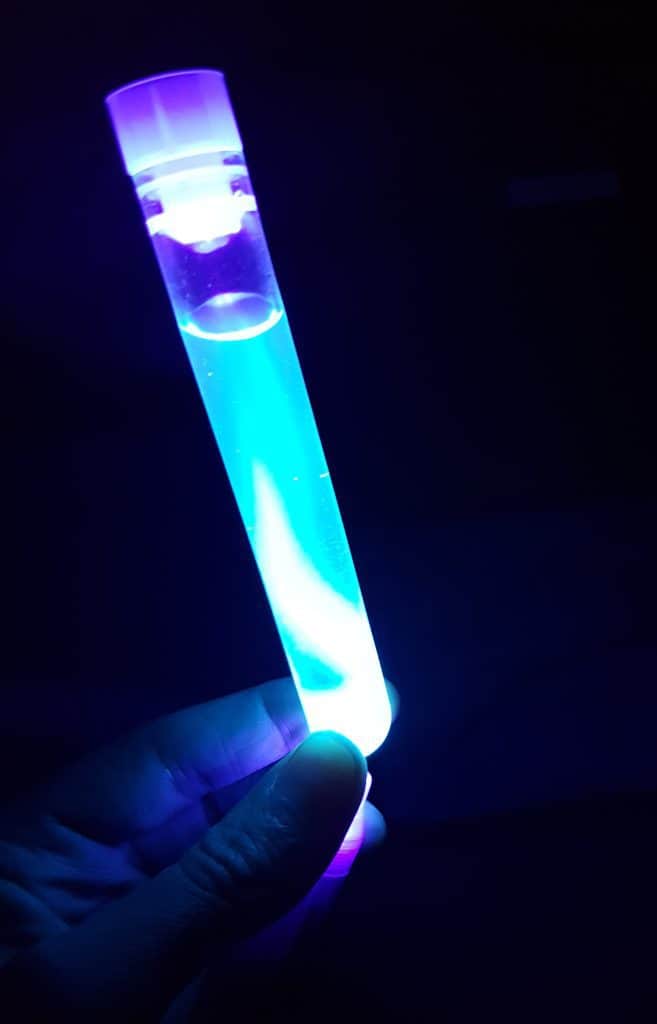 You can see how it creates a kind of helix effect. In real life this looks utterly amazing. 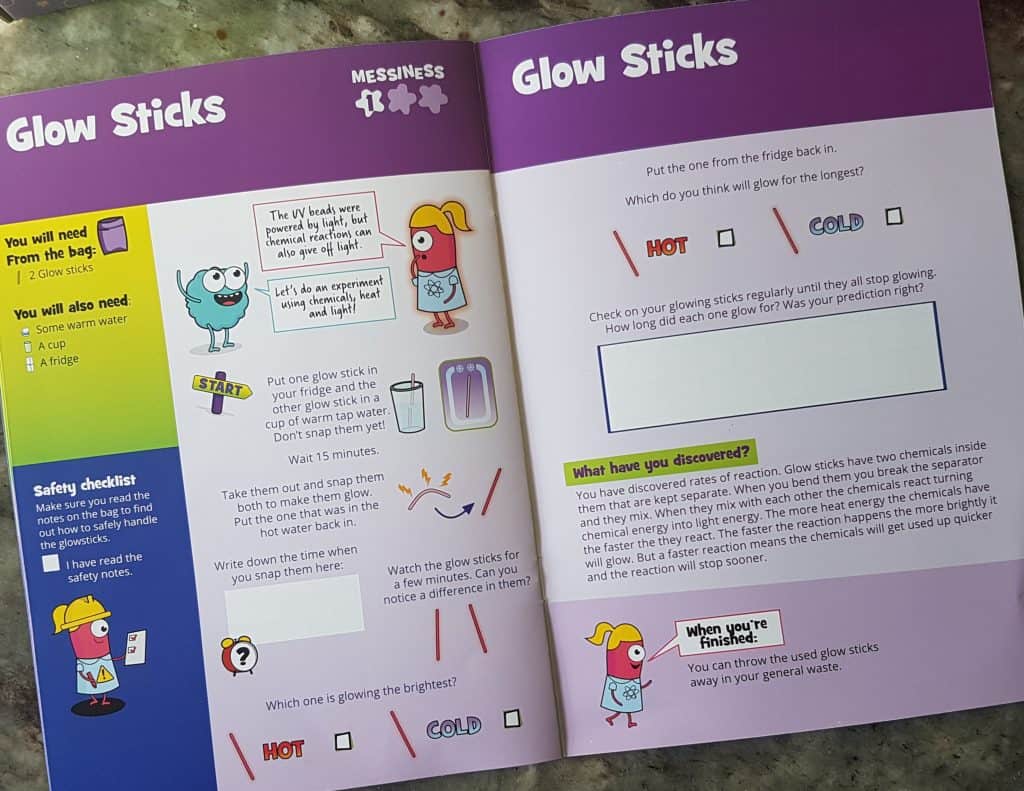 We followed the instructions, snapped the sticks, and put one in the fridge and one in warm water. 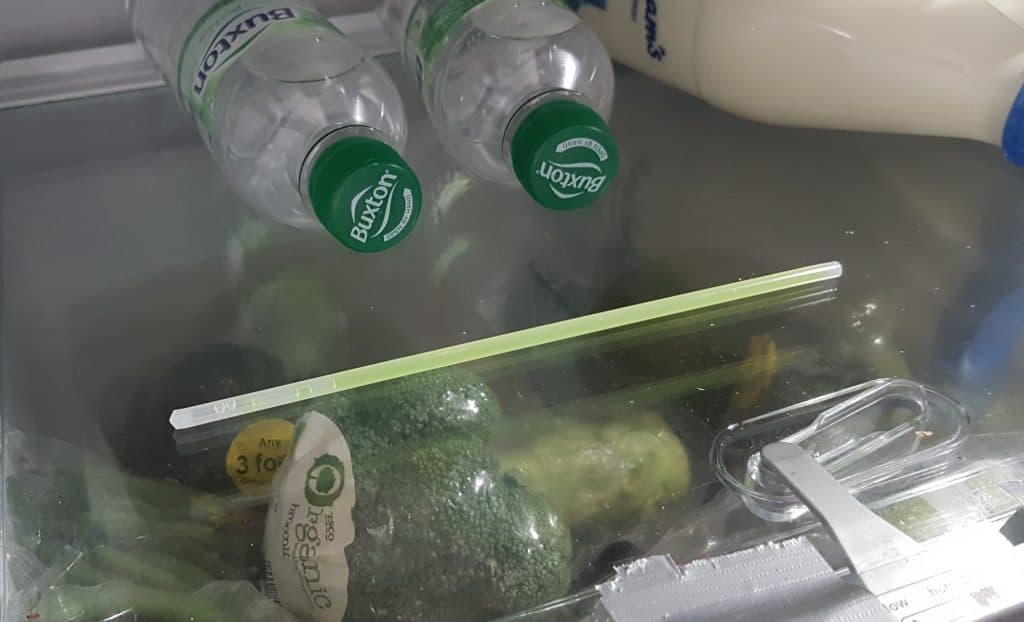 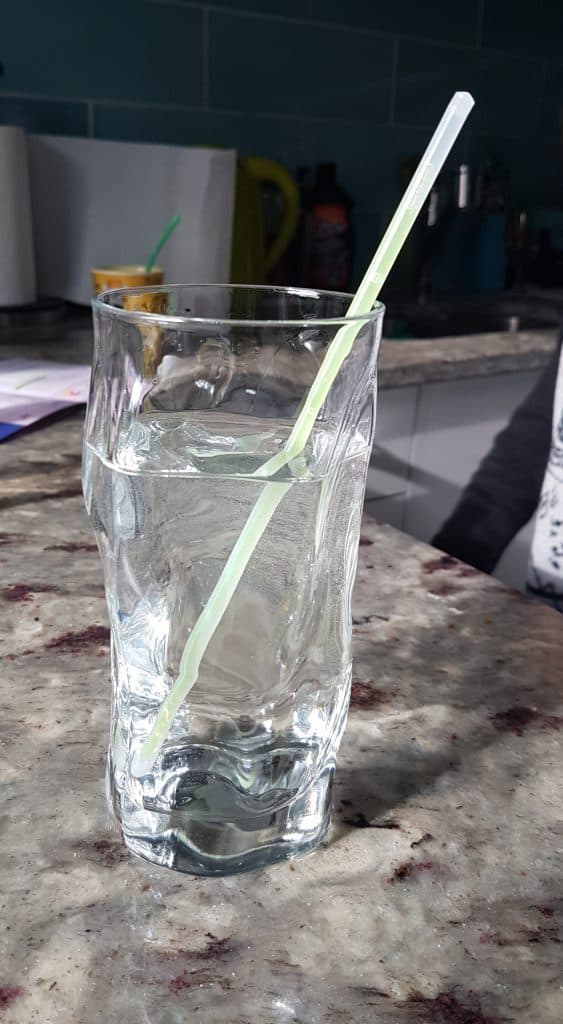 After the prescribed fifteen minutes we took a look at the sticks. 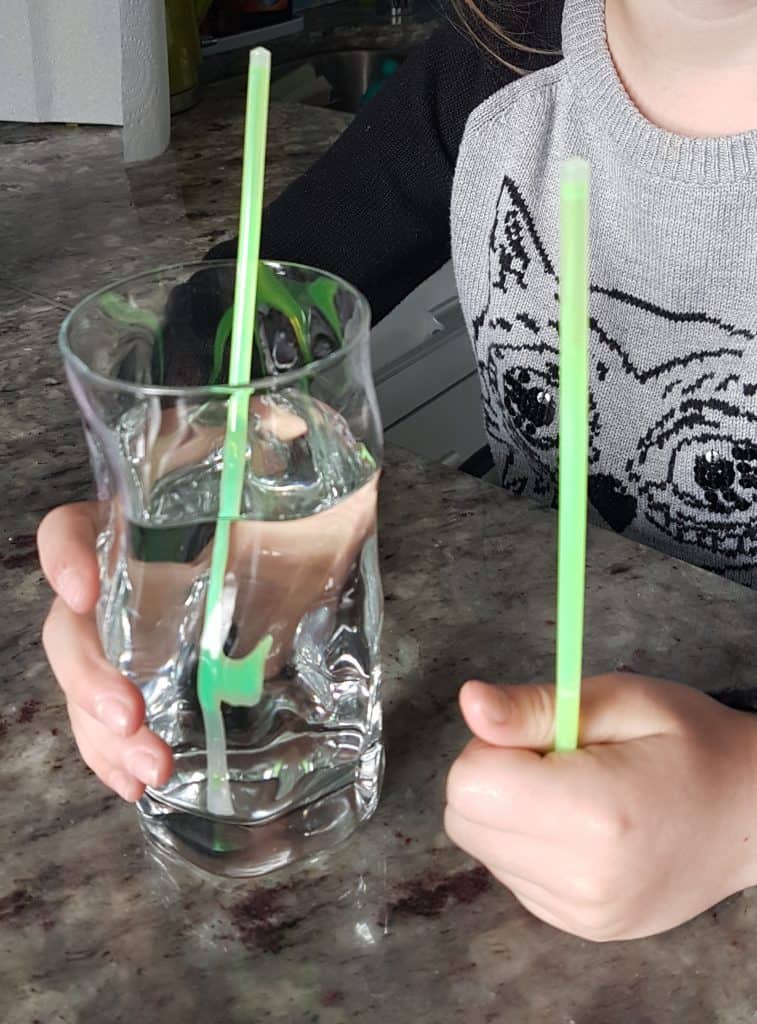 I have to say, we weren’t quite sure about this one.

We sort of thought the cold stick was brighter, but it was rather difficult to tell.

I remember from childhood being told to always keep glowsticks in the freezer to make them last longer.

Either way, glow sticks are awesome. And the glow liquid we made was definitely brighter!

The last thing we did was the most fun. 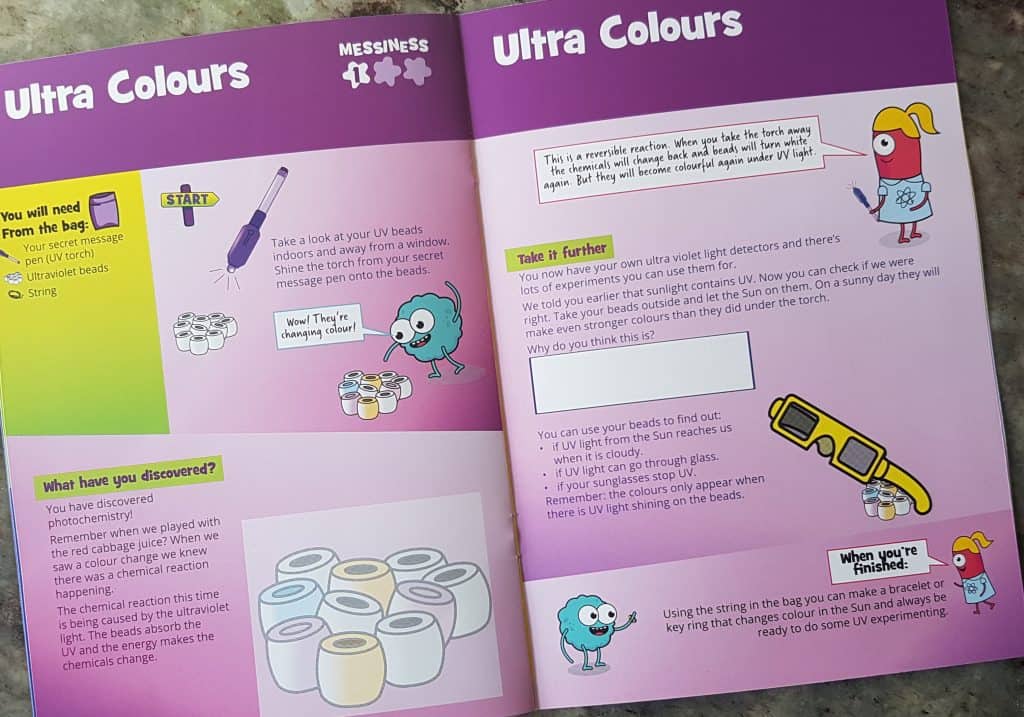 There was a little package of white beads included. 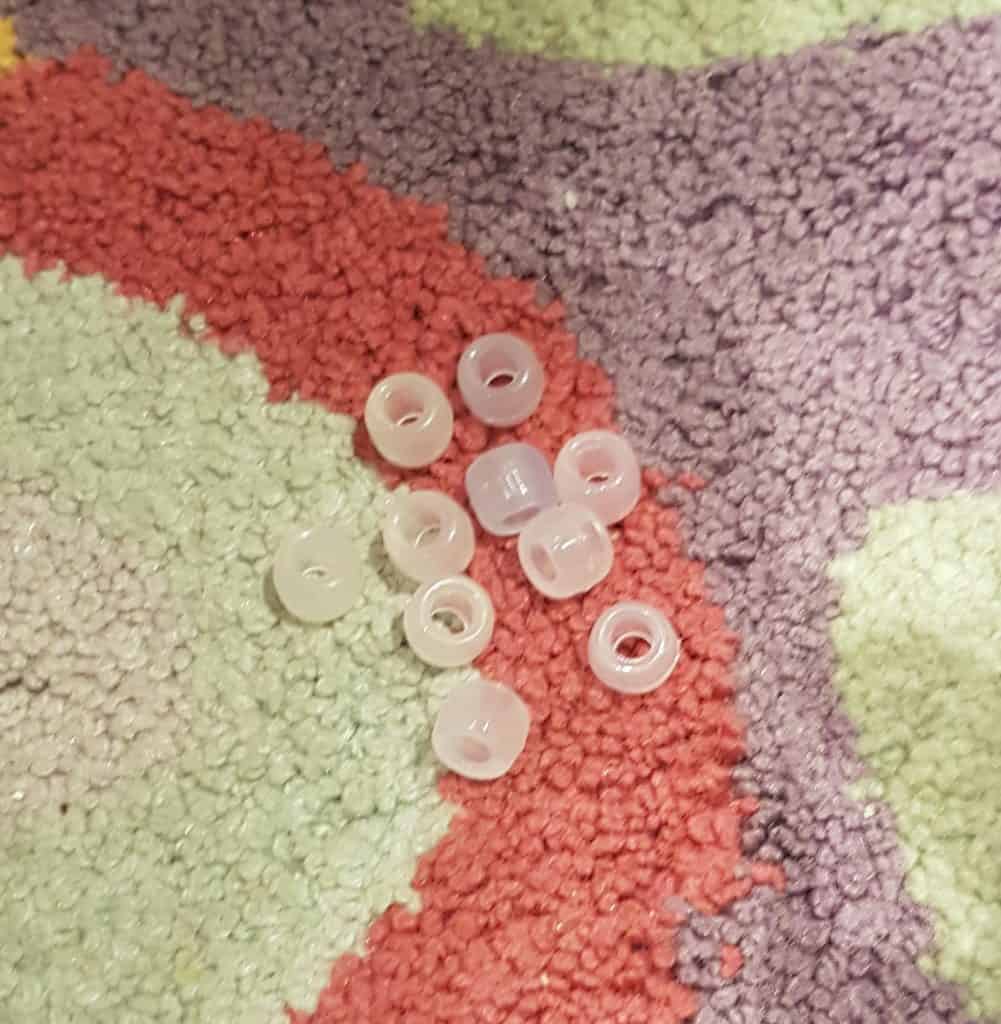 Shine UV light on them… 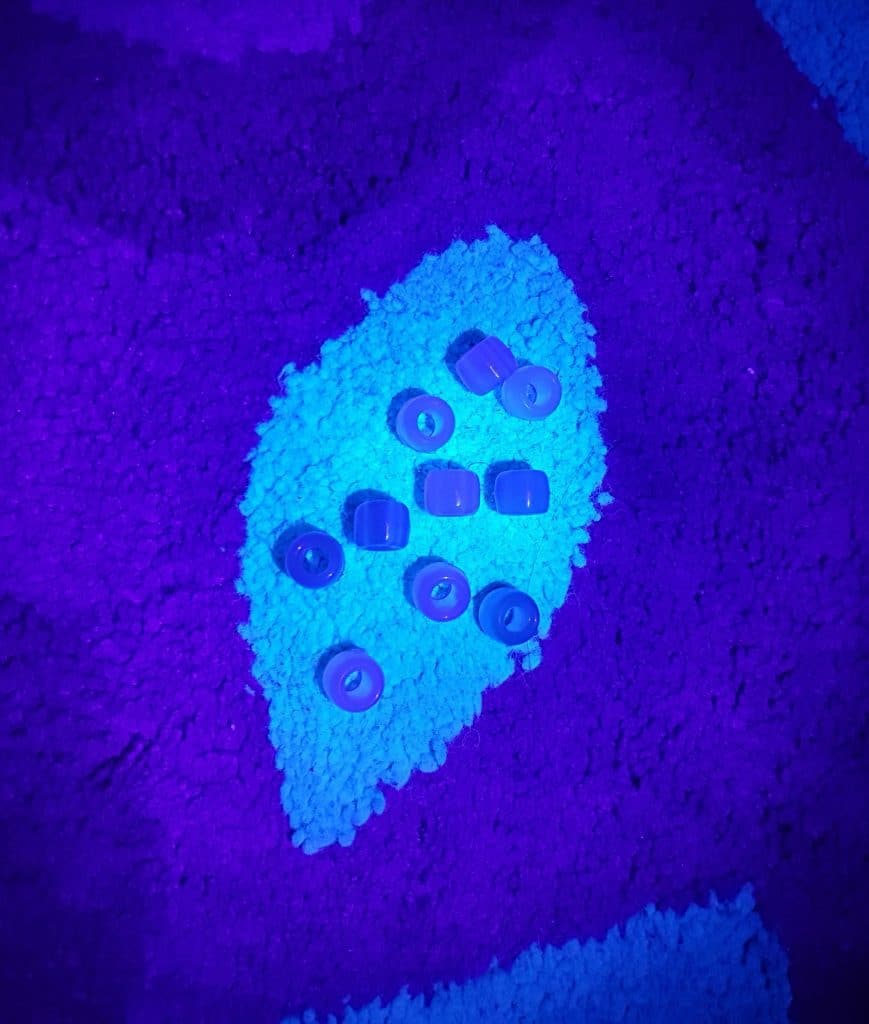 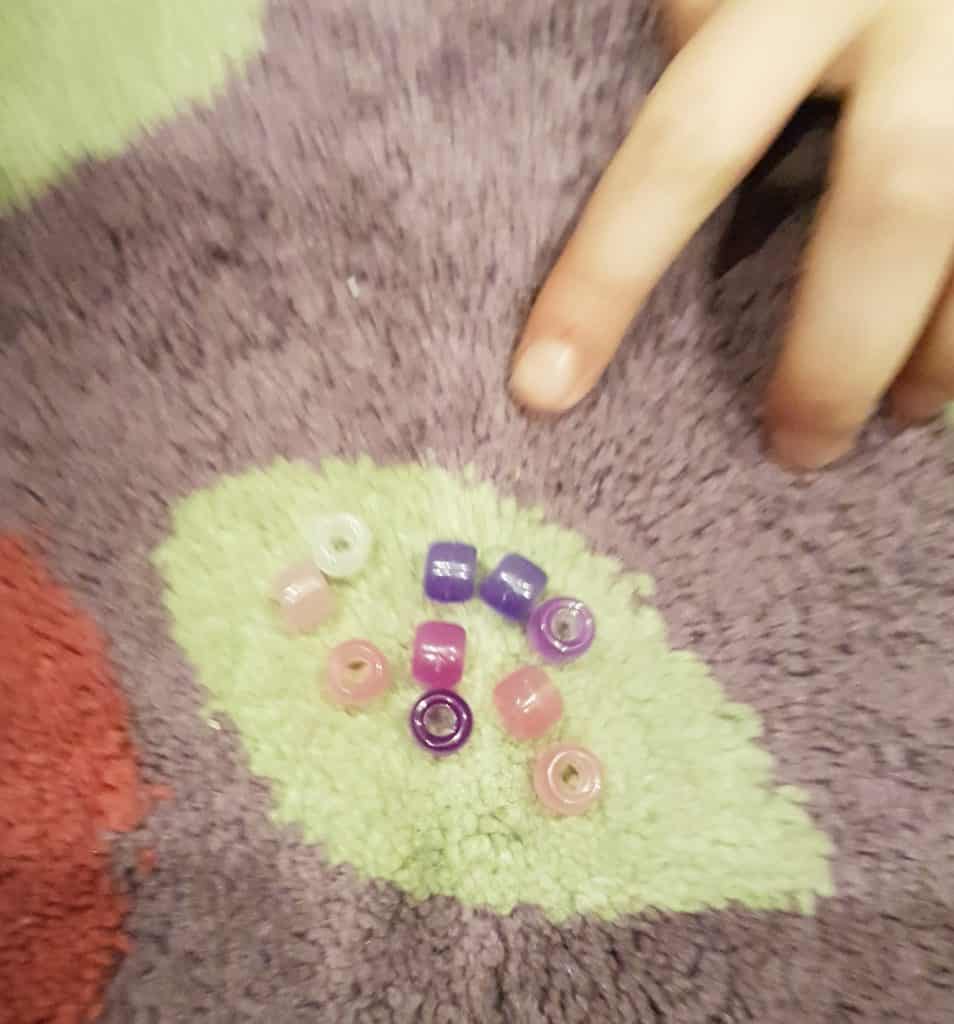 So cool! They completely change colour!

Unfortunately that day was not at all sunny, so we couldn’t test them out in sunlight.

However the UV pen light was more than enough to produce the desired effect.

So, what a fun box this was! The messiness factor was pretty low, but the wide-eyed-wonder factor was super-high!

The UV pen is absolutely brilliant, and goes into our stash of fun stuff.

Creating the glowing liquid was a lot of fun, especially experimenting with making the light bounce off the tube.

The glow stick experiment was probably not quite as fun as the rest, though of course Little C still liked the glow sticks! I suspect it’s because it didn’t involve that much hands-on stuff. The idea was certainly interesting , but I don’t think we were particularly successful with that particular experiment.

We were slightly time-constrained doing this box, and while we probably spent only around an hour actually doing the things and photographing them, we could actually have spent a lot longer.

Little C was very excited to show Big C the beads and liquid the next morning, so it held her interest very well.

There’s so much at the moment with girls and STEM subjects, and this is a wonderful and totally neutral introduction to science for all children. The little cartoon characters, Meg and Pico, that guide you through the activities are a boy and a girl, and it’s frequently Meg who takes the lead. I don’t know if this was intentional or not on the part of the creators, but it’s very encouraging.