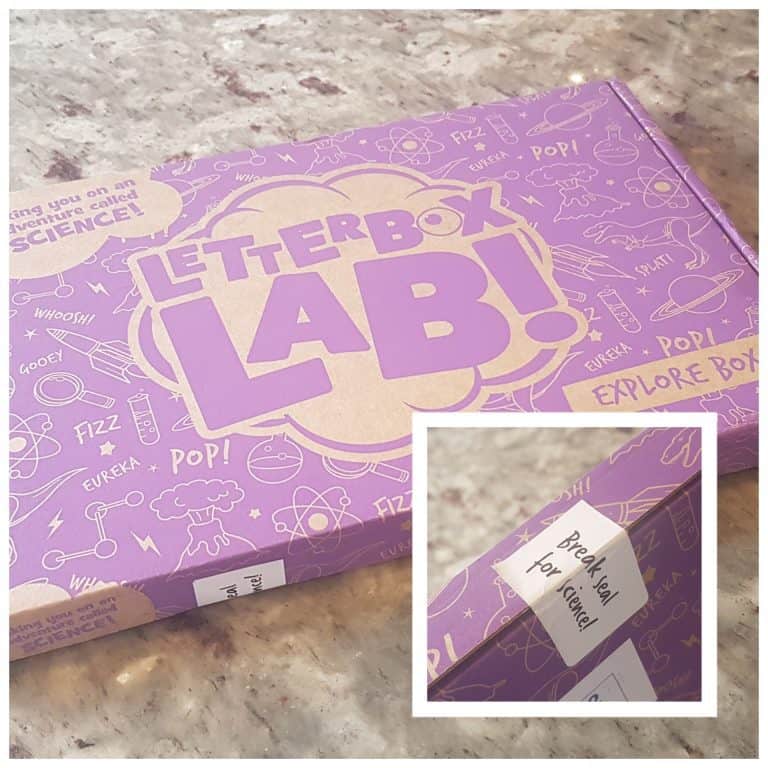 My daughter, Little C, is six, and has been badgering me for a chemistry kit for months! This was the perfect opportunity to measure her enthusiasm for science. I was sent an Explore Box, which is perfectly designed for her age group. 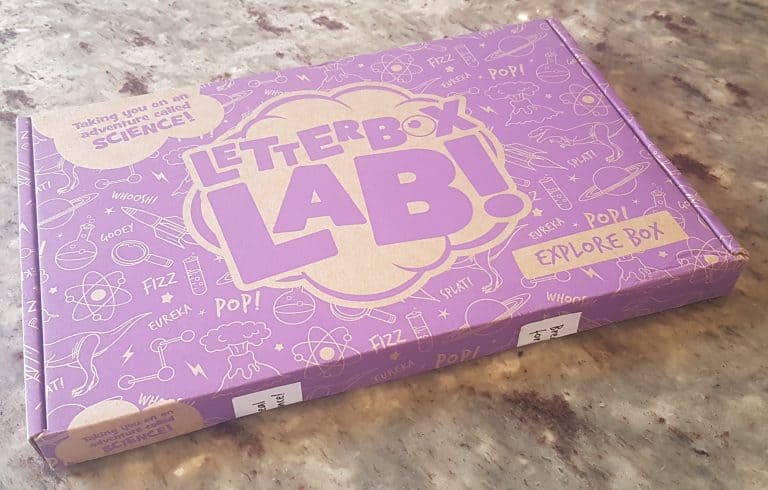 The box is nice and thin and fits through the letterbox, which is just as well given the name! The design and branding is fun, and was of course instantly appealing to Little C. I managed to keep it out of her hands until the weekend. 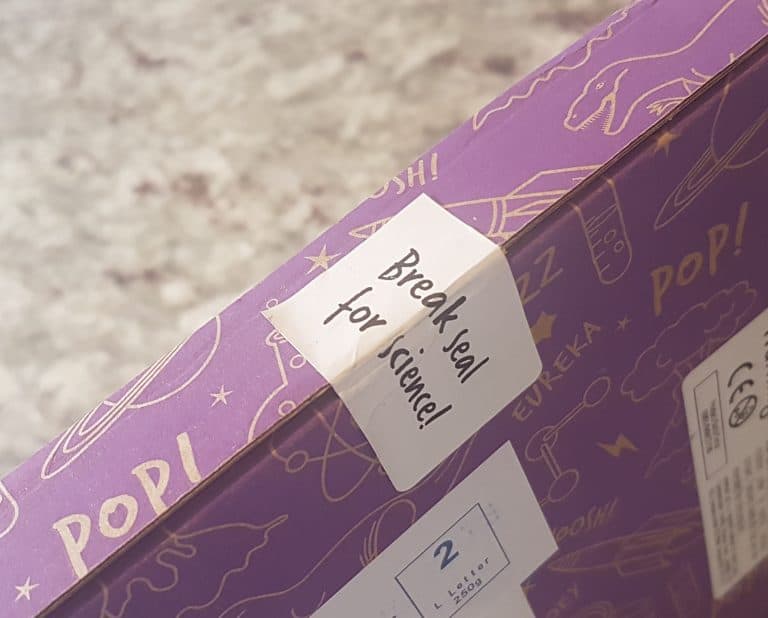 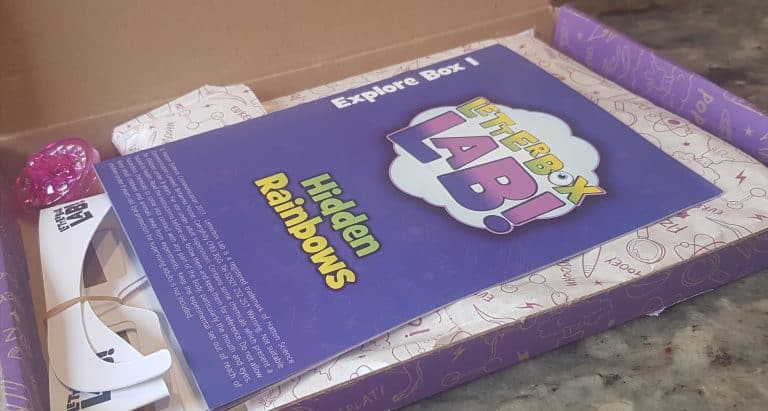 Opening it up, we found the booklet and instructions, with a few intriguing-looking things around it. We could see what might be a spinning top, a pair of cardboard glasses, and promisingly lumpy paper bag.

As well as the booklet for the actual scientist they sensibly include a sheet for grownups, including contents, supervision advice, and safety information. 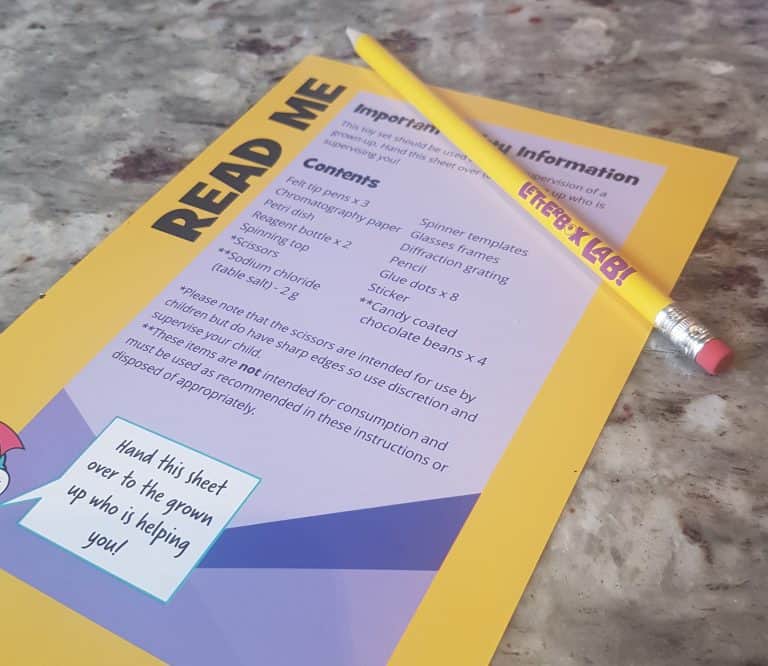 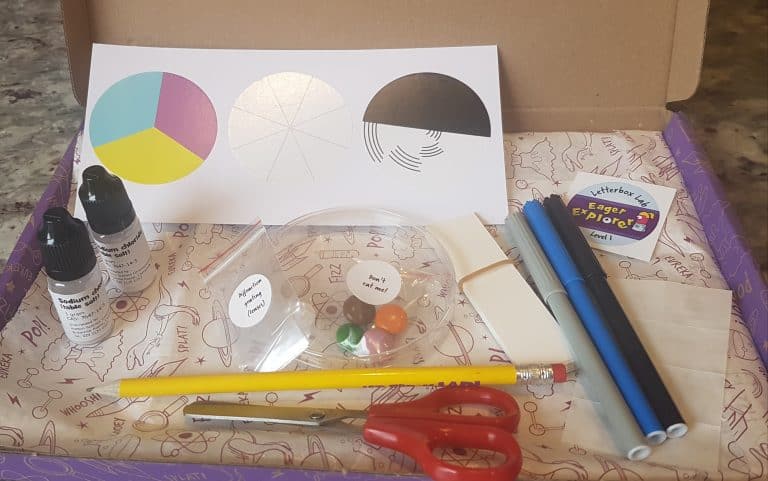 This is what we found inside the bag. Some of these things would be used up in the experiments, and others, such as the petri dish, pens, spinner, glasses, and pencil, could be kept and used again.

Note: Little C is left-handed so she used her own scissors. (Left-handed children absolutely need scissors designed for lefties. So do adults for that matter.) Given how rubbish kids’ scissors usually are I was pretty impressed with the quality of the ones included here. They did actually cut.

I like how the chocolate smarties are labelled ‘Don’t eat me!’ though you can be sure Little C still really wanted to eat them.

Anyway, having unpacked everything it was time to take a proper look at the booklet. 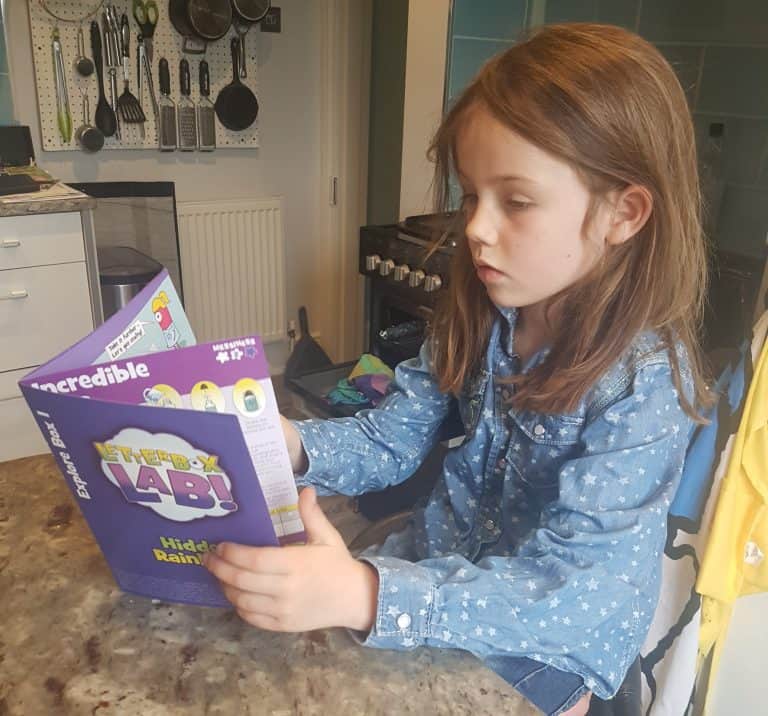 The first experiment had a Messiness rating of two, which indicated that there might be a certain amount of mess created. As we were going out to lunch and I did not feel like any kind of big cleanup we decided that we would actually start with the third experiment, Rainbow Spinners. 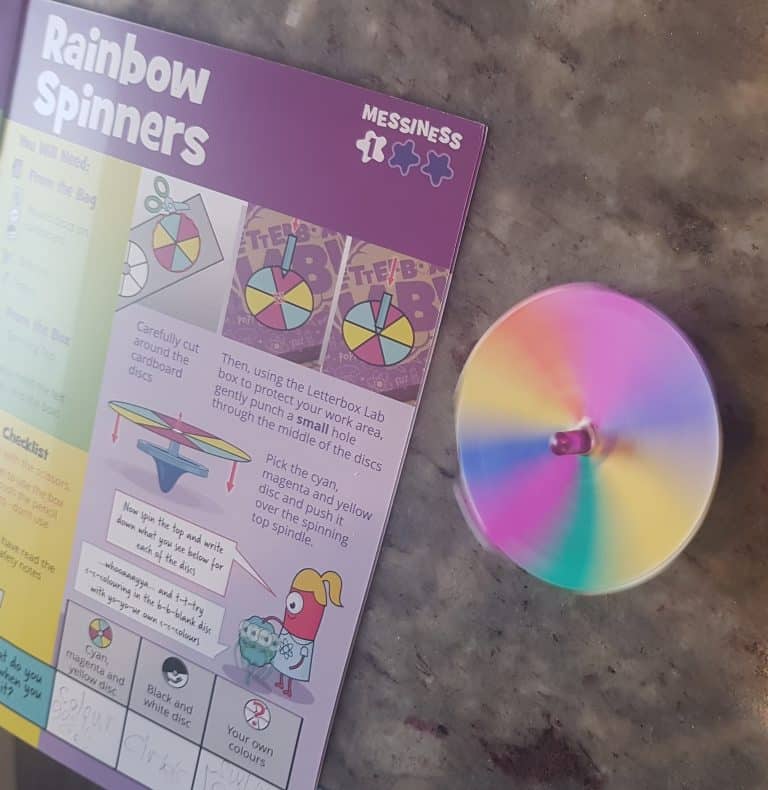 So this is what the spinning top was for! The idea was to see what happened when various patterned and coloured discs were spun around really fast. The effect doesn’t quite come across in pictures but it really looked amazing. We were surprised to discover the different effects produced when the various discs were fitted on the spinner, especially the black and white one (you could see colours!). Then you had a disc to colour in yourself, as you can see below. 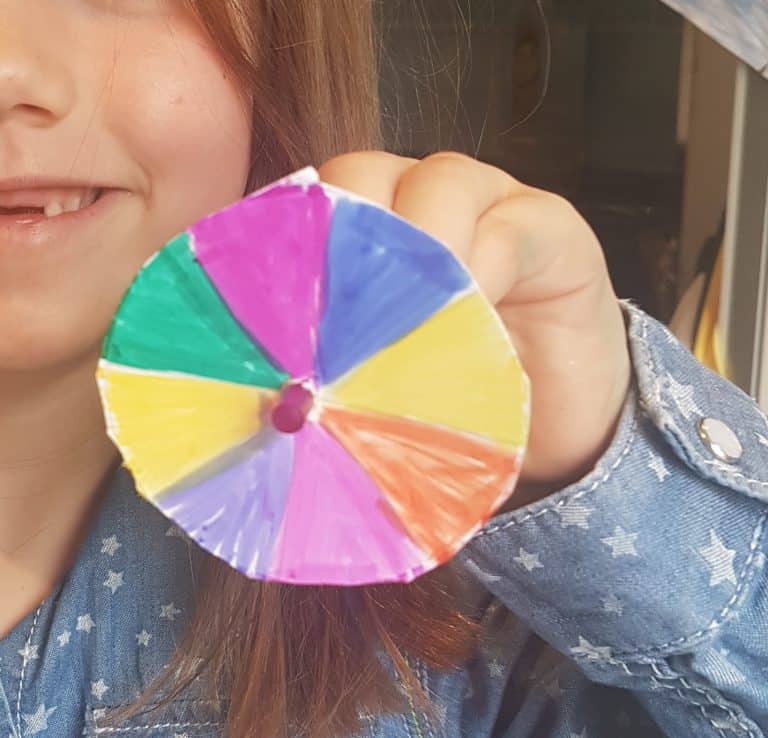 This was a simple but incredibly effective experiment, and we both enjoyed it.

Having playing with the spinner and done some colouring, Little C decided it was time to make the Rainbow Glasses. This one was another pleasing combination of free creativity (colouring in the glasses) and practical (putting the frames together with the diffraction grating, which was the lenses).

This is what happened when she put on the glasses and, as per the instructions, looked at the kitchen lights: 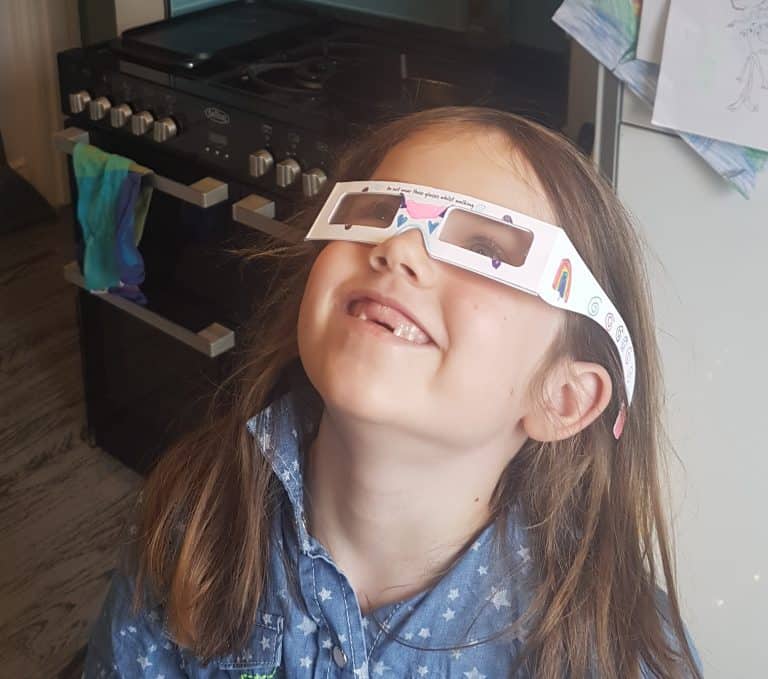 Do you know what she saw? If you remember your school science lessons you’ll remember what diffraction means. And if you can’t remember, this is what the glasses did: 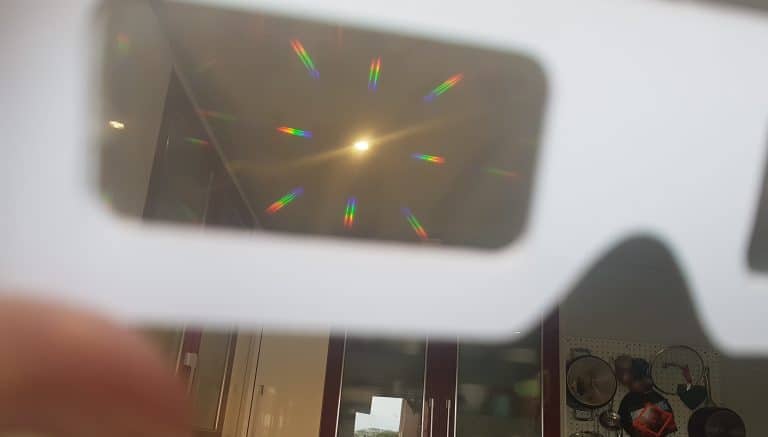 Rainbows! The instructions reminded the scientist not to look at the sun, but Little C went round the house looking at all the different lights and windows, and admiring the rainbow effect. Another page of the instructions included easy-to-follow explanations of how the effect worked, and how light is made up of all the colours.

Then we went to lunch, so we didn’t get to the final experiment for a few days.

So one day after school out came the rest of the equipment, including the petri dishes, the interesting squeezy bottles (which contained salt and I had previously filled with water), and the chocolate smarties. Little C looked longingly at them but I reminded her that they were for experimenting, not eating.

This experiment was called Incredible Inks. 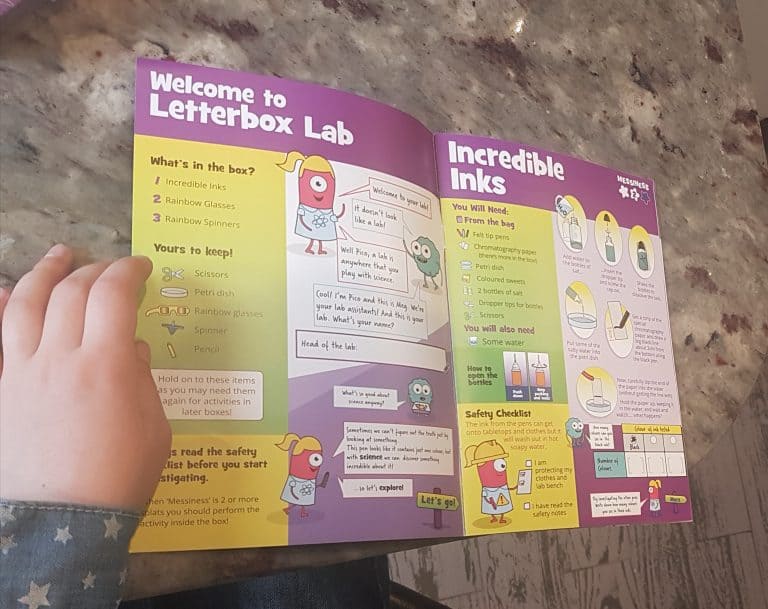 The object was to use the saltwater and chromatography paper to see discover the different colours in the felt tip pen inks. The great thing about this experiment was that it felt properly ‘science-y’ with bottles of liquid and paper and a petri dish. 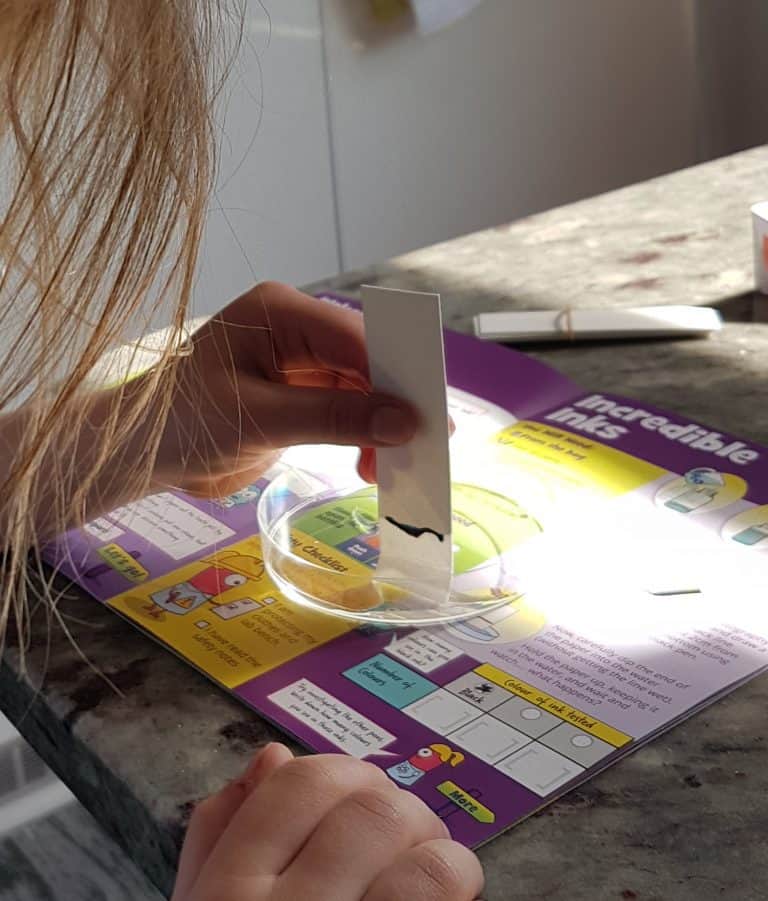 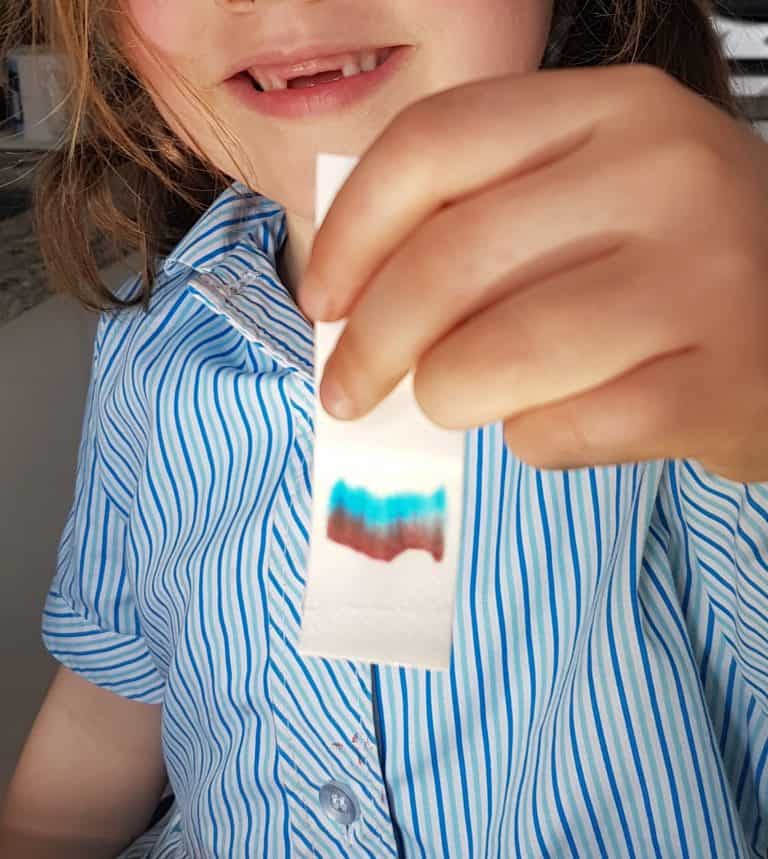 This is what the black pen looked like! Cool huh?  Little C tried it with all the provided pens (black, grey, and blue) though the black and blue had the most satisfactory results.

Then we tried it with the various coloured sweets.

This is from the yellow sweet. It’s an alarmingly bright colour, but it was also cool to see how all the colour comes off the sweet and leaves it all white and unappetizing. (I hate smarties anyway, so I was even happier when they went in the bin.)

There was an additional piece of paper and the suggestion to cut out a shape, draw patterns on it, then use the salt water dropper on the patterns. 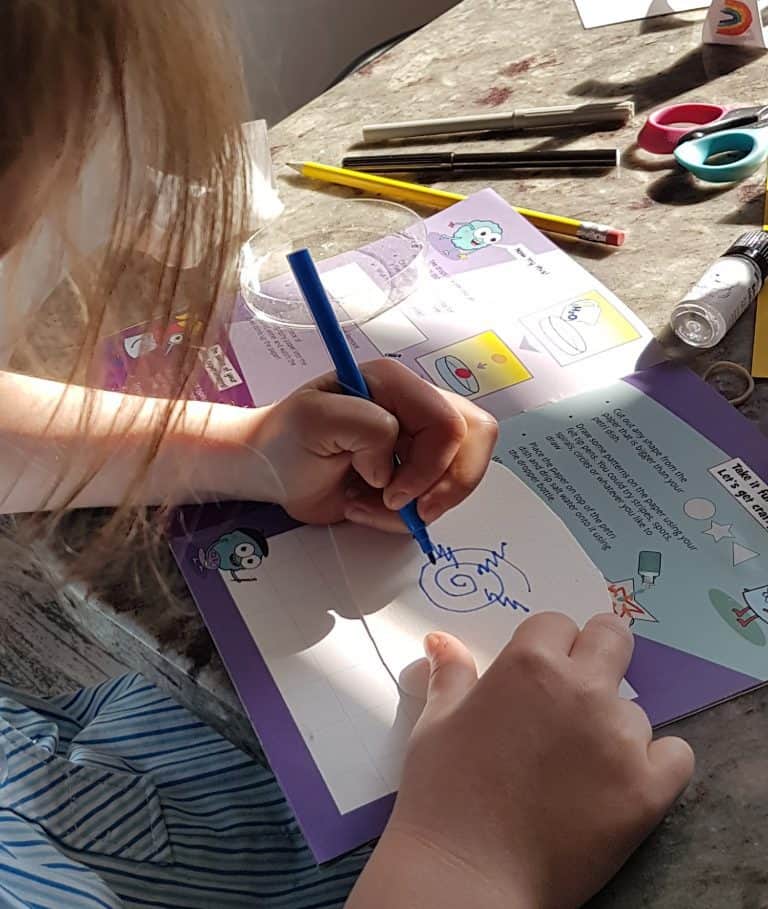 Another fun creative aspect of this experiment. 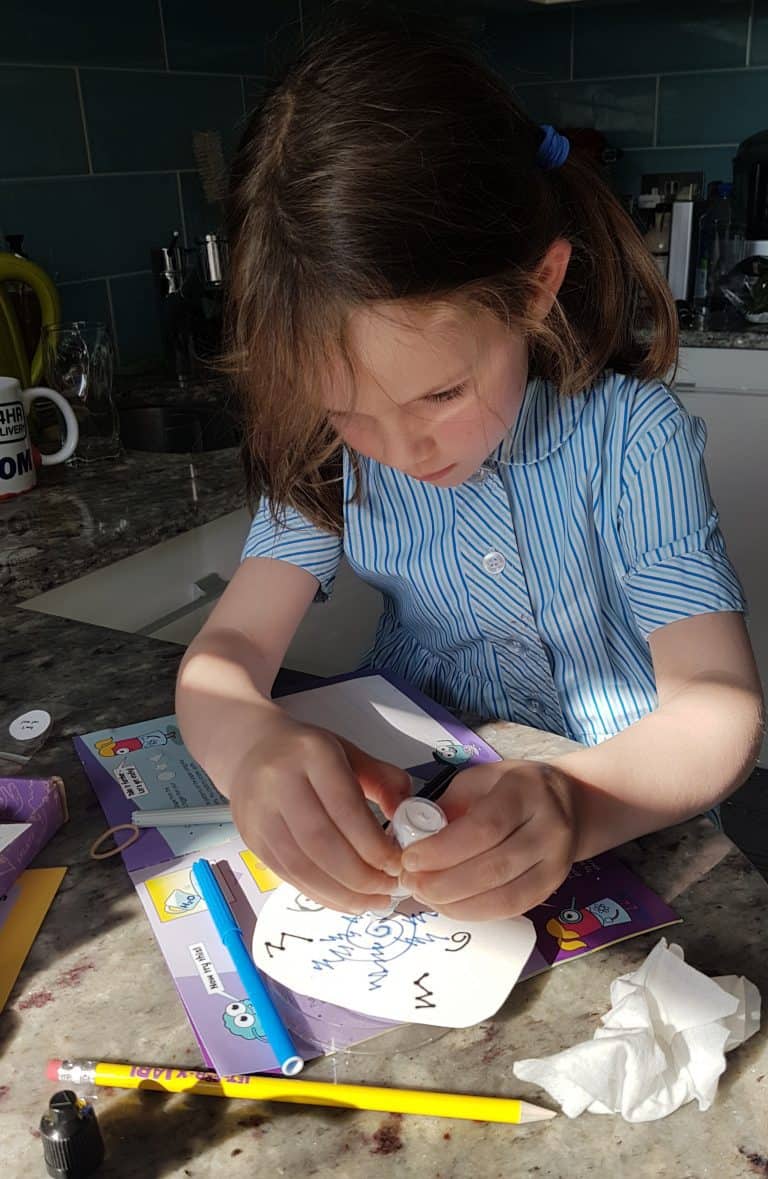 Adding the water drops; it was fun to see the colours separating again and making the patterns even prettier!

All the experiments can be found online if you want to check how they work. It all seemed pretty idiot-proof, as the instructions were all beautifully clear. 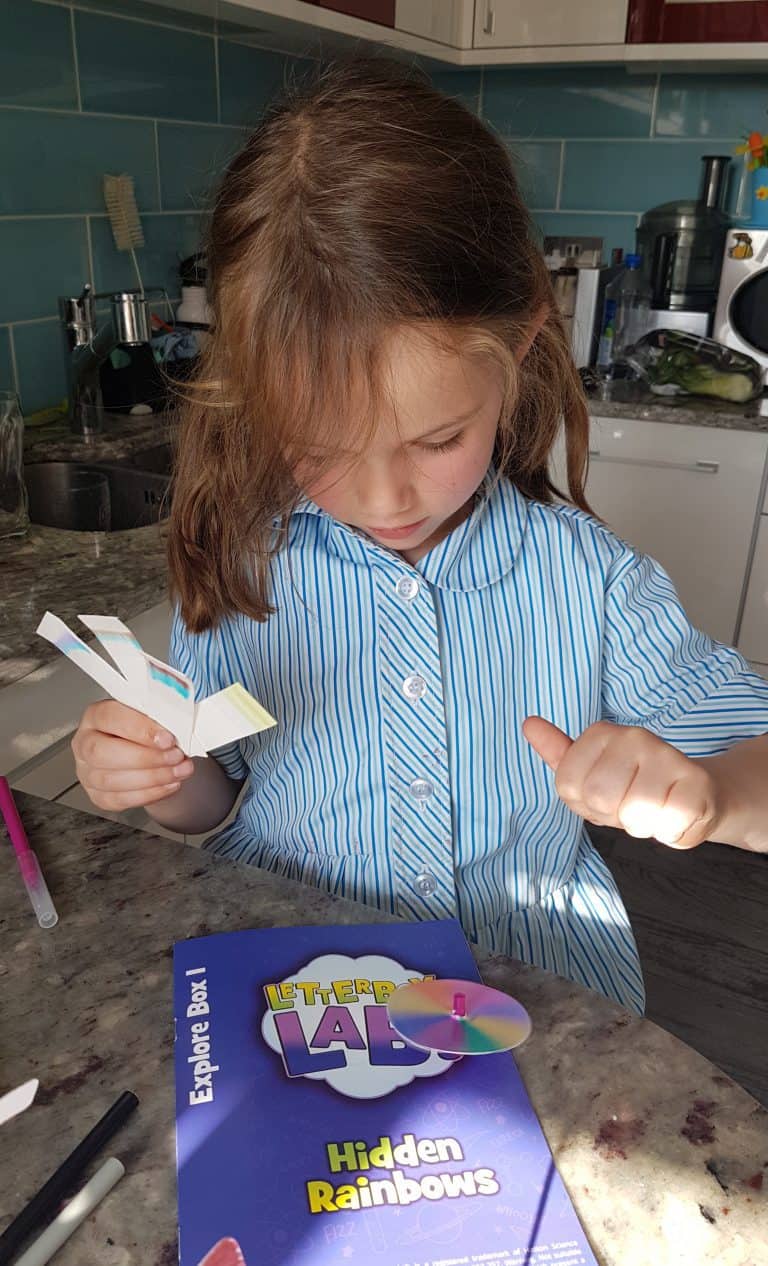 Letterbox Lab says that the Explore Box is about an hour’s worth of experiments, which seems about right to me. There is plenty of scope for trying out and creating more spinning discs (the website has a template), and there was enough extra chromatography paper to make a couple more shapes to decorate. I’m sure we spent at least an hour total, possibly more, doing these various experiments. It would be a fun way to spend a weekend afternoon, or space them out over the course of a week, as individually they are short enough to do after school.

I think it’s excellent that there are some bits you can keep. Of course it’s not guaranteed you will be able to keep track of all the bits and bobs, especially something slightly fragile like the petri dish, but the spinner and glasses are fantastic, and you can never have too many pencils or scissors.

Absolutely everything is included in the kit (except for water, and you have a tap, right?) which is very reassuring. There is none of that irritating running around looking for some essential component upon which the whole experiment is based! Well done to Letterbox Lab for being this thoughtful.

The instruction booklet is superb. The illustrations are clear, and there is lots of useful information. The explanations of the various results are fascinating, and the language is simple enough that younger children should be able to grasp at least the basics. The little cartoon characters are appealing, and the use of speech bubbles to ask questions and convey facts is very effective.

The only thing that I felt could have been included was a brief explanation of how actual sky rainbows work. As every child has seen a rainbow at some point it would have been great to include those details, and subsequently seeing a rainbow would be a great conversation starter and knowledge refresher. After all, we’re heading into summer and what’s a British summer without both sun and rain, eh?

It’s a minor detail though, and the next time we see a rainbow in the sky I’m pretty sure it will be easier to explain to Little C why they appear.

For under nine quid including P&P this is good value. As I said, everything is included which makes it a very low-stress endeavor for the supervising adult. There is enough knowledge in the booklet to make it worth keeping, and if you chose to stretch this out over several days you have a wonderful ongoing learning process. You could make endless patterns for the spinner too!

I’ve no doubt about the educational value, yet it doesn’t feel at all didactic. Little C’s attention was held throughout. She enjoyed reading the booklet, and remembered the names both the diffraction lenses and the chromatography paper several days after using them. When she does diffraction in school I’m hoping this stuff will still be floating around in her brain somewhere! 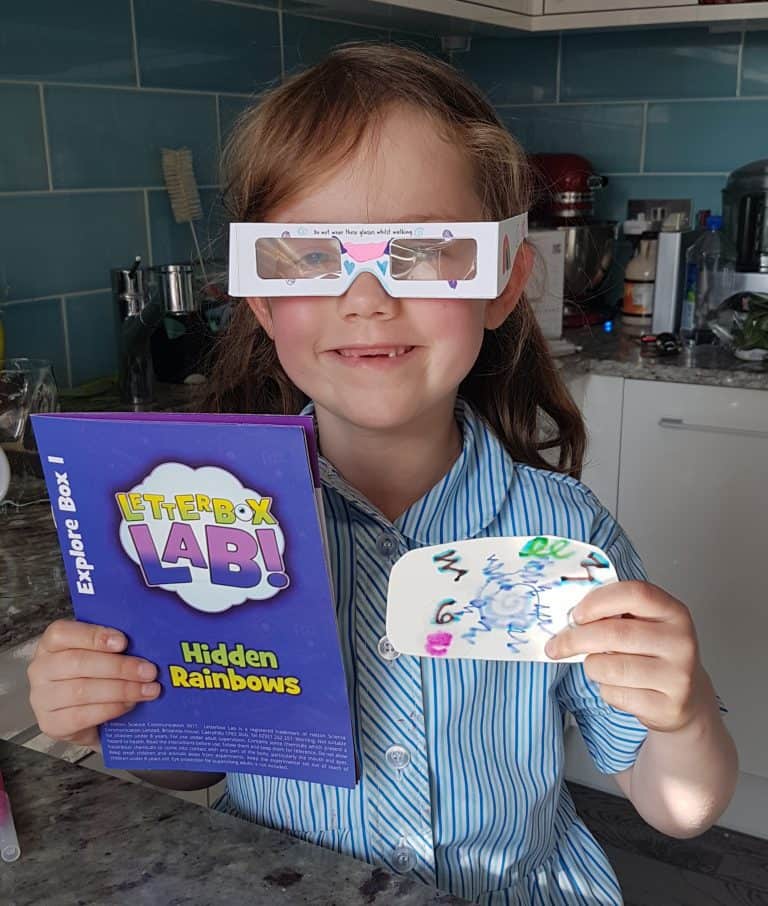 As for Little C’s verdict?

‘It was A-MAZING mummy!’