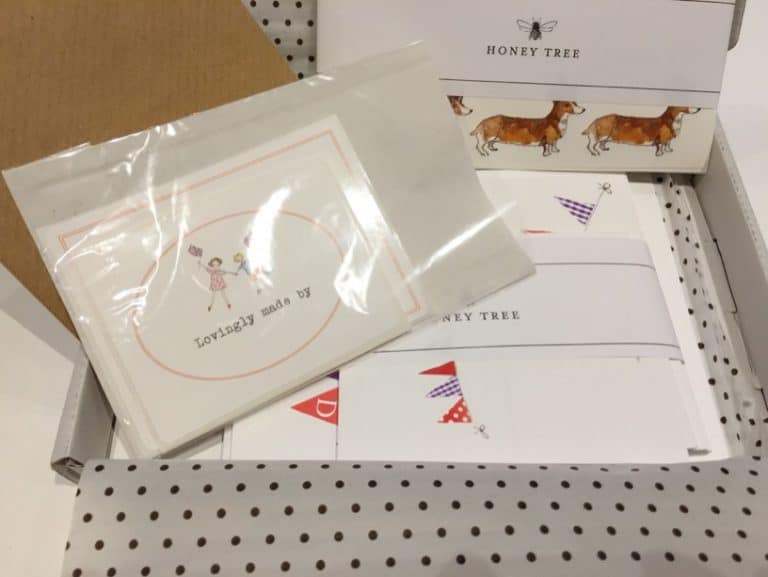 A stationery stockpile is a modern day lifeline. Our busy schedules guarantee that we’ll be sideswiped by a birthday, engagement or baby announcement now and then- and it’s tough to feign thoughtfulness when we’ve picked up a card at a train station kiosk. Preparation is the secret arsenal of that friend who- no matter what the occasion- manage to show up with a card designed by a local artist, bespoke and hand printed on premium quality cardstock. How do they do it (you ask with exasperation)? Easy: a replete stash of stationery.

The role of a stationery subscription box is twofold: some items are coveted for personal use and others are designated for gifting. The difficulty is finding a box appealing to your tastes; it’s crucial to ensure that the items kept and those given away are equally as striking – there’s joy in giving something that you’d be delighted to receive, after all.

Honeytree Post offer such a subscription service, called the Stationery Lovers Club, where their team have collaborated with bespoke stationers to offer subscribers an exclusive trove of items; each box contains at least seven products that showcase beautiful designs from local artists.

April 2016’s Honeytree Post box is themed around Her Majesty the Queen’s 90th birthday, so naturally it bursts with crowns, corgis and bunting. The box arrives in a convenient cardboard case that fits through the mail slot and all items were lovingly wrapped in spotted tissue paper and snugly fitted inside. Card sets were secured together with a Honeytree Post branded paper sleeve.

Given the narrow theme of April’s box, I was curious to see how versatile the items were for other occasions- I had actually received mine after the Queen’s birthday, so the contents were potentially no longer relevant. However, despite the fact that designs focused on strong associations with the monarch, they are applicable for events that merit an anglophile touch- the colours of the Union Jack are prominent and the imagery, such as the Crown and bunting, are generically English. Think street parties, Eurovision parties, the upcoming Olympics- with a little creativity, some of the contents could be pertinent to all.

For instance, the invitations and table name place cards are decorated with a simple bunting design and come in a bundle of six respectively. The invitations have the words ‘you’re invited’ integrated into the cover design and are blank inside. They are printed on high quality card, giving them a luxurious texture and expensive appearance, and are paired with six crisp white envelopes. The six name places simply sport the bunting design- in the same style and colourway as the invitations- and aren’t flimsy or liable to topple over. The only downside is that you might have to be selective with invitees- there are only half a dozen invitations included and no option to purchase further cards.

The Union Jack card is also printed on high grade cardstock, making it feel artisanal. The image on front is a rendition of the flag- it’s recognisable but given a slight gingham treatment. The card is blank on the inside, making it a good addition to the stockpile- again, the design might seem restrictive, but it would be useful for celebrating the bestowing of British citizenship or the birth of a first generation of a child in the UK- these suggestions might sound tenuous, but I’ve personally struggled to find anything but generic cards for both in the last year!

The note cards come in a set of four and are illustrated with three crowned corgis lined up at the bottom of the postcard- again, demonstrating a high quality piece of stationery, these are printed on creamy off-white cardstock and paired with matching envelopes. The words ‘Just a Note to Say…’ are printed at the top and there is ample blank space to scrawl your message. The illustrations are composed in a sweet style of sketchy lines, loosely washed over with watercolours, giving them a Quentin Blake quality.

The four stickers included in April’s box are cute and perfect for kitchen projects undertaken with children- they can be used for labelling in jam making, or even affixed to a Tupperware container filled with homemade treats. The stickers are large enough to wrap around the front of a mason jar and the two designs differ- the ‘From the Kitchen of’ sticker is illustrated with jam tarts and a pot of jam and is versatile; the ‘Lovingly Made by’ label shows two children waving Union Jacks and is more appropriate for younger chefs in the making.

Finally, the A5 print is simply executed in monochrome with a sketched image of a crown and the words ‘Queen of the Castle’ appearing underneath in a typewriter font. Printed on a pure white card, it’s modest and clean- it could be framed to adorn a vanity table, or simply popped on a shelf for display.

While the theme of April’s box might initially seem restrictive, most items can be relevant with a bit of creative thinking. Each of the contents has a bespoke look and feel, so they can be doled out to friends and family without reservation. The illustrations are attractive, using splashes of watercolour to evoke a cosy, rustic look- this lends them a wide scope for use as they’re universally appealing.

For this reason, Honeytree Post Stationery Lovers Club is likely geared towards an older subscriber base- primarily due to how universal and practical it is. Younger customers would likely prefer bolder, edgier designs, but it’s ultimately down to individual tastes. On the whole, this would make a wonderful and thoughtful gift for a mother, sister or friend who relishes modest and pretty examples of high quality stationery. While I can see myself gifting some of these items and using the corgi postcard notes, giving the labels to nephews or nieces and perhaps displaying the print on my dresser, I will be stashing away the Union Jack and bunting cards for now- but who knows when these will come in handy?

When the occasion does arise, I will look royally prepared.

Honeytree Post is available as a one-off purchase for £15 including shipping in the UK. Several subscription options are available (UK and internationally), ranging from three, six and twelve month periods.

Honeytree Post's Stationery Lovers Club will appeal to those who keep a stash of pretty stationery for every occasion.

How would you rate HoneyTreePost ?