Reviewed by Olivia on 22nd December 2015

The Hello Fresh box not only takes the strain out of doing the weekly shop, it’ll also stop you stressing about what to cook each night.

This subscription service delivers a box brimming full of fresh produce, sourced from independent British suppliers, to your door once a week, plus it includes a selection of delicious recipes you can cook using the ingredients you receive.

And if you’re too busy to be at home to sign for it, the box can be left in a safe place and is packed with icepacks to ensure everything stays cool and fresh.

There are three types of box to choose from: the Classic for meat and fish eaters, or the Veggie, for vegetarians, both of which cater for two to four people. Then there is the Family box, which will feed four to five people.

The cost of the box depends on how many meals you want to get out of it, but from all the boxes you will be able to cook a minimum of three meals. 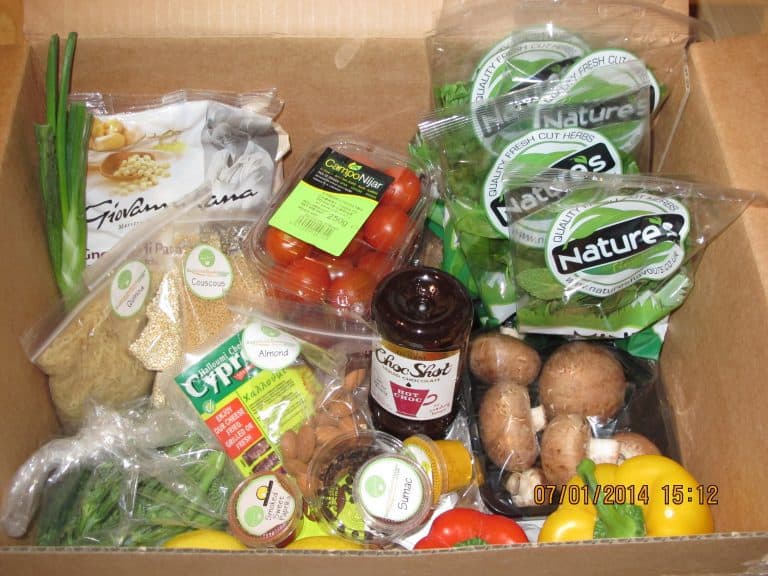 The Classic box is the most expensive, costing from £4.90 per meal.

Your box will be delivered either on a Tuesday or Thursday and will have everything you need to cook the recipes included, which are nutritionally balanced for a healthy diet and, on average, take 30 minutes to prepare.

The recipes are printed on cards, they are extremely clear and very easy to follow. Measurements are in teaspoons and grams, with step-by-step instructions and pictures, as well as nutritional information, the cooking time and number of servings.

And you are certainly not going to go hungry.

The amount of food you receive is very impressive. On opening the box it seems to go on forever.

I received the Classic box, for meat and fish eaters, oddly though none of the recipes called for either.

Everything, however, was extremely fresh, with a selection of vegetables, including peppers, a spring onion, mushrooms and cherry tomatoes, to pots of spices, bags of fresh herbs and even stock, plus dry goods too, including foods I’ve never cooked with before or rarely reach for in the supermarket, such as halloumi, tabbouleh, quinoa and gnocchi.

If that wasn’t all there was also a bottle of Choc Shot, a liquid chocolate that can be stirred into hot milk to make hot chocolate, drizzled over desserts or even spread on bread.

There was, however, a slight mystery surrounding the almonds that were in the box. Although they were pictured on one of the recipe cards, they weren’t listed as an ingredient on any of them.

Also, another recipe called for Italian hard cheese. This wasn’t featured in the box and isn’t necessarily something everyone would have to hand.

The concept of the box, however, is appealing.

If you’re hard pressed for time and cooking isn’t your strong, this solves all your problems – not only will your cupboards be stocked, but you’ll have recipes to hand too.

And, even budding cooks will get something out of this. With simple, inspiring recipes that use produce you may never have tried before, it’s a great way to get your own creative juices flowing.

How would you rate HelloFresh ?