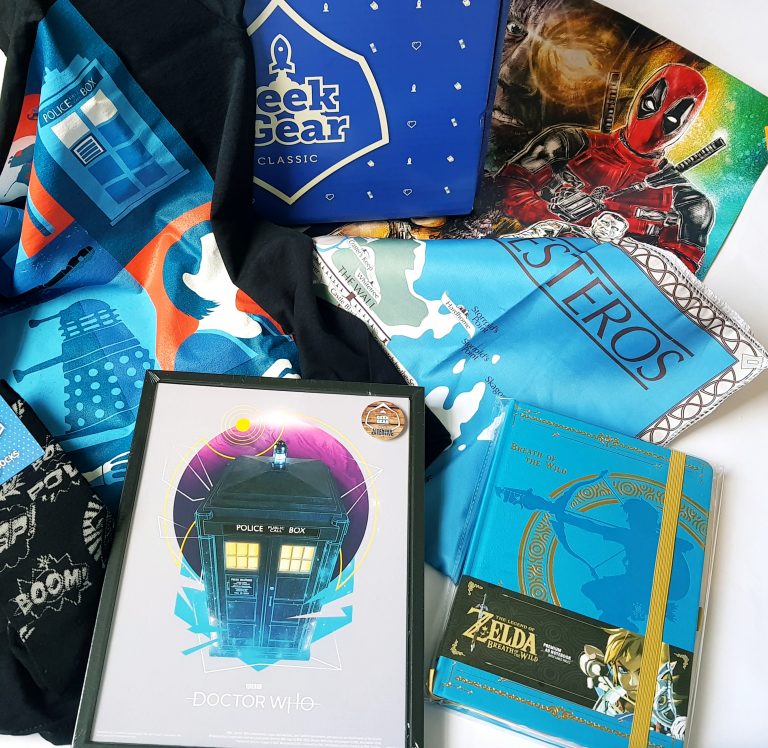 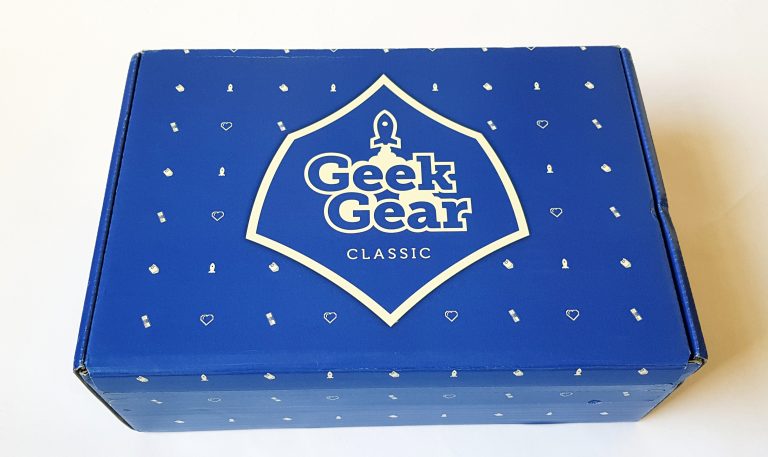 The box is delivered in a mailing bag, so it looks nice and tidy when it’s unwrapped. 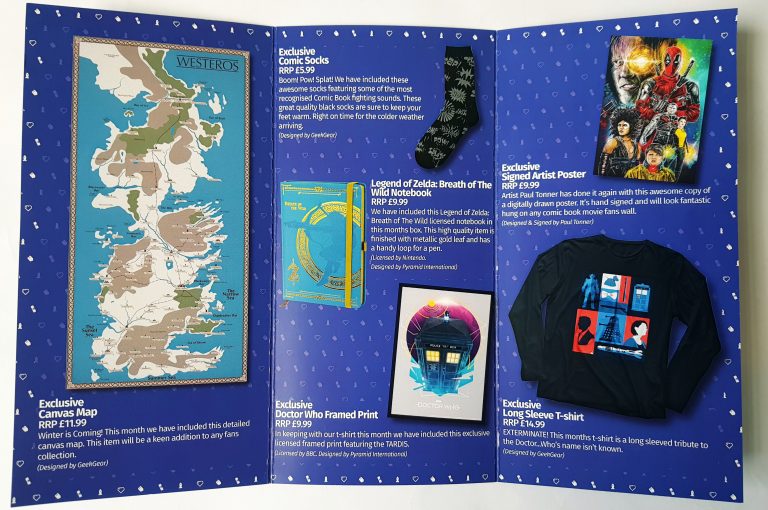 Here’s the menu. It gives you descriptions of all the items, plus RRPs. 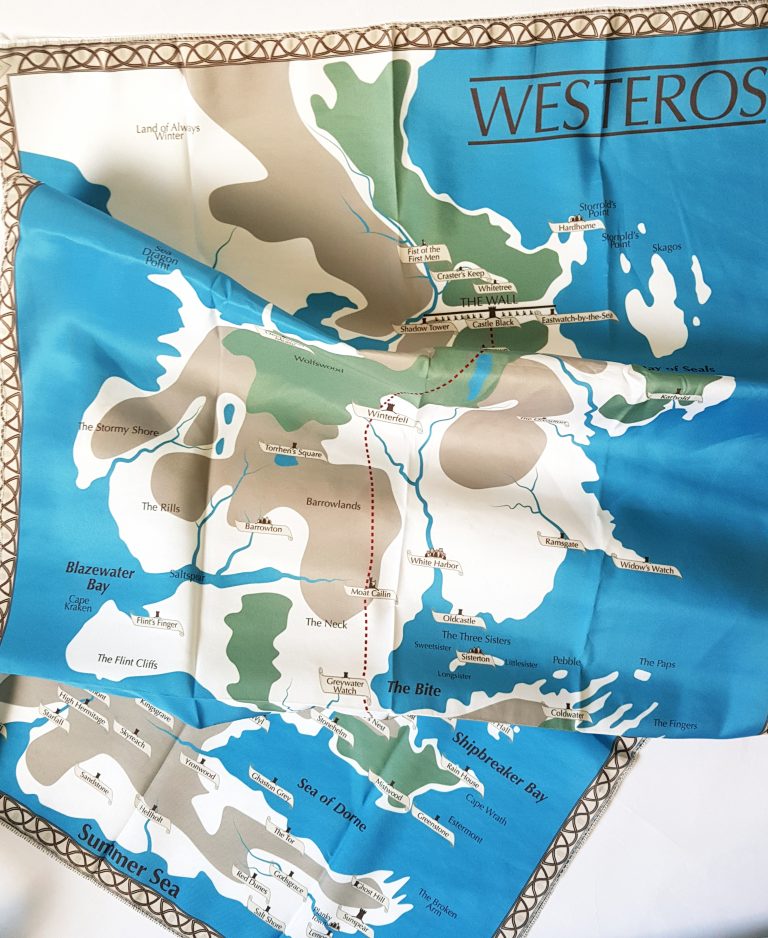 This Exclusive Canvas Map of Westeros is an item, like last month’s banner, that is a little to big to fit into a picture properly! Anyway, it’s rather large, about the size of a towel, and it’s got great details of the Game of Thrones land. It’s not technically canvas, more like thick nylon, but it looks pretty cool. 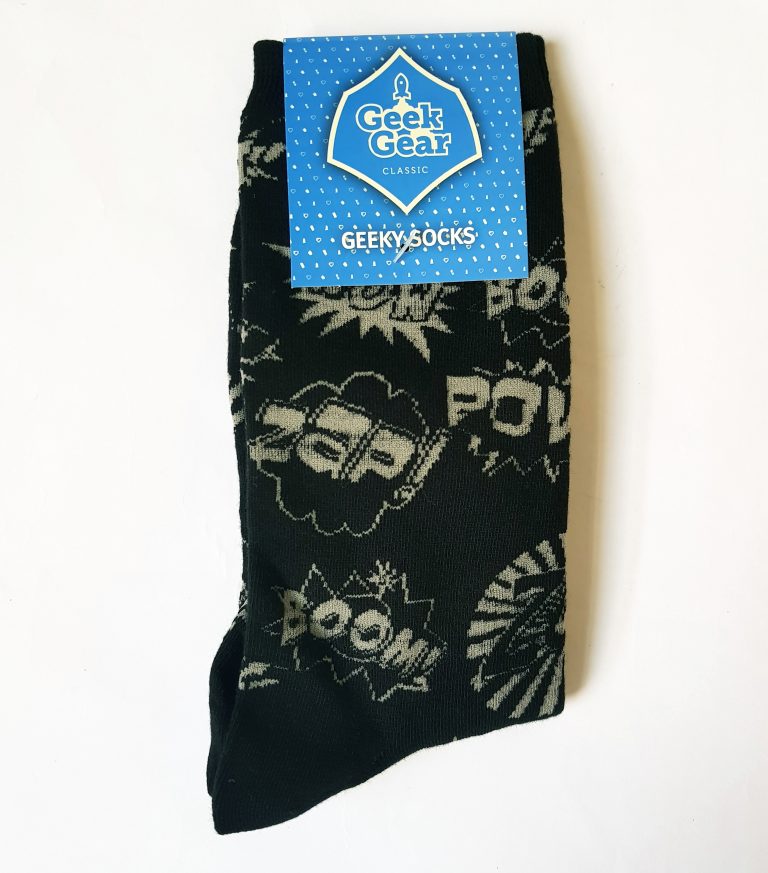 Another exclusive, this time Comic Socks. They have general comic fighting sounds on them, and are black and white. They’re fun, though nothing amazing, and as I’m a woman with rather small feet the one-size doesn’t quite work for me. 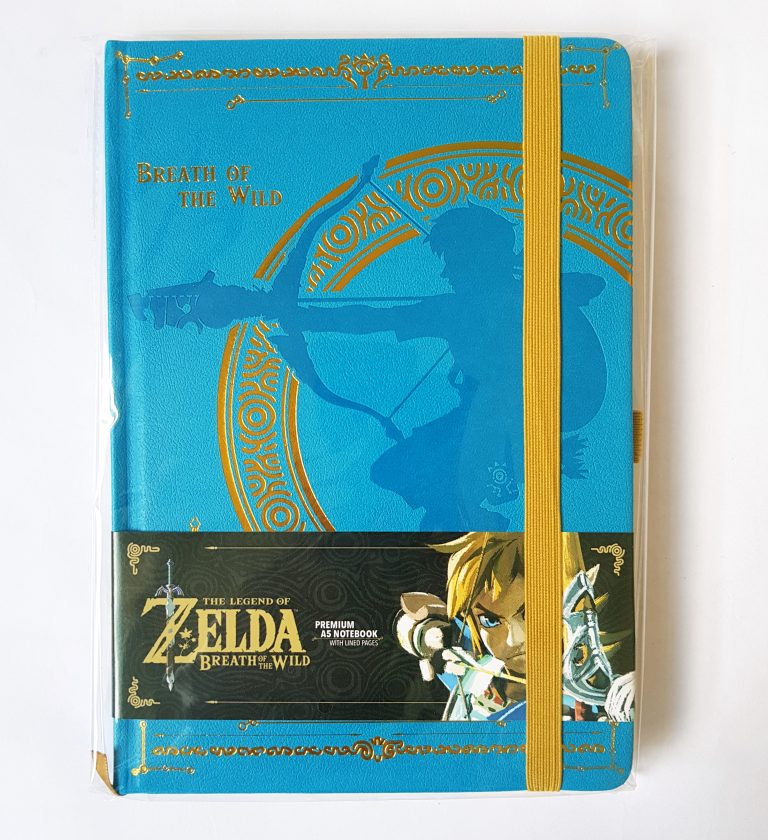 This Legend of Zelda; Breath of the Wild Notebook is gorgeous. 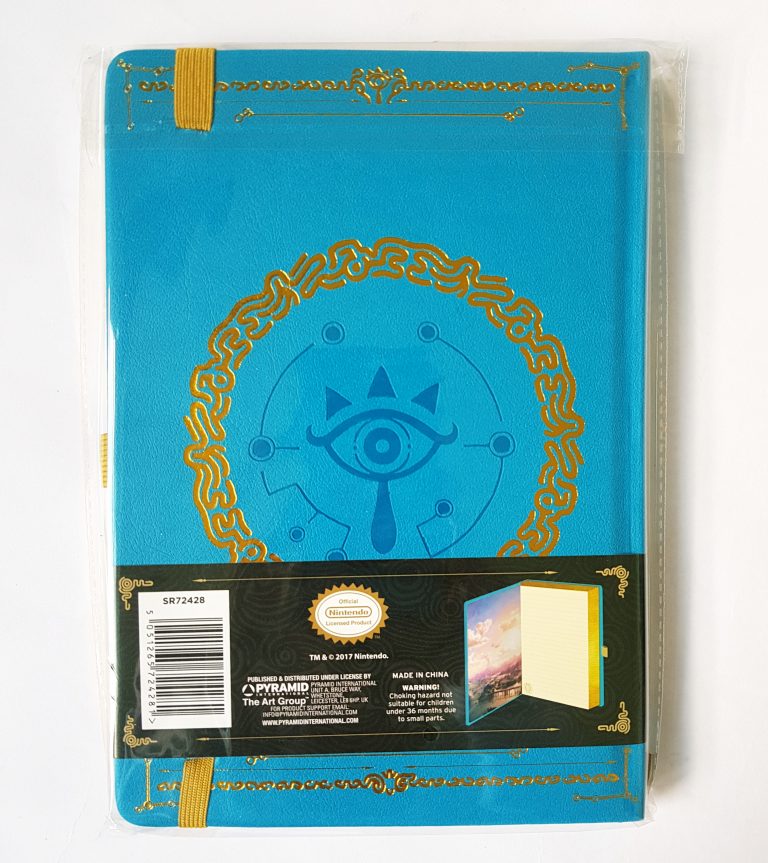 It’s decorated front and back, and has an elastic closure and pen loop. The paper inside is lined. 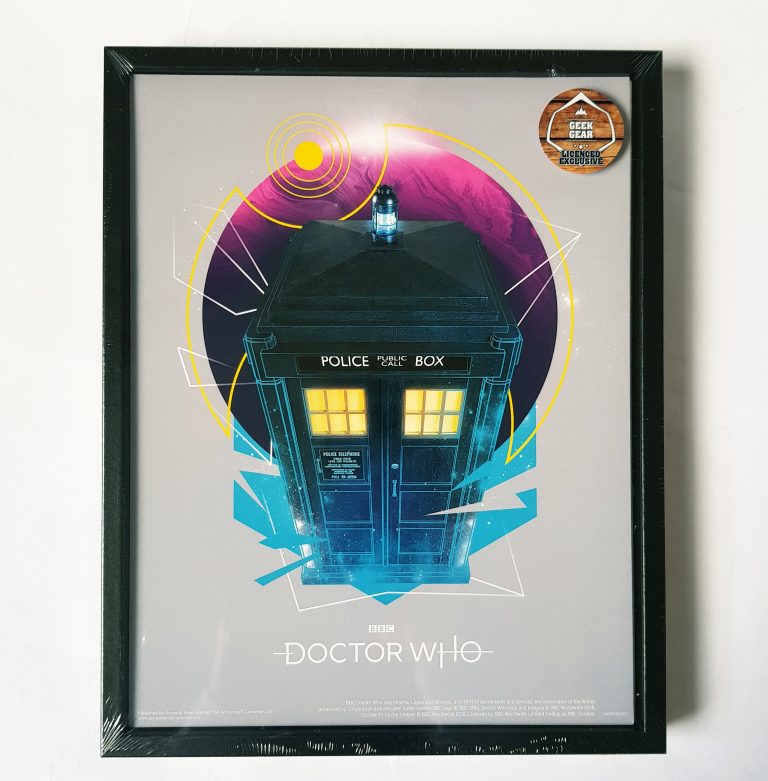 This is an Exclusive Doctor Who Framed Print. It’s pretty nice, and the frame is sturdy. A great piece of art for fans. 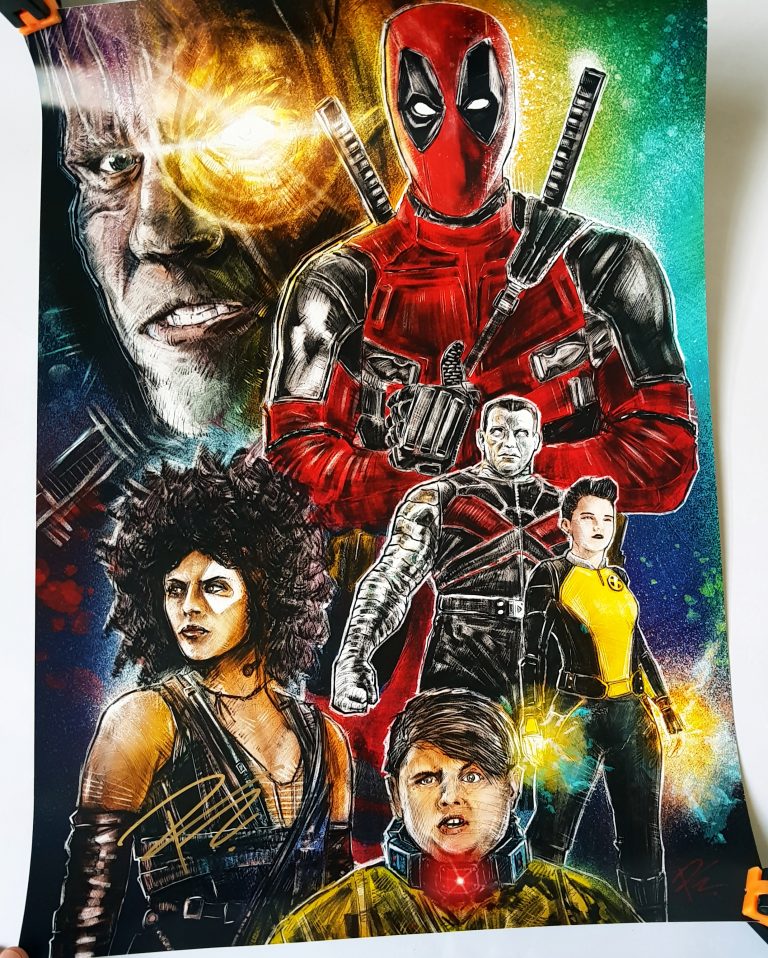 I had a lot of trouble unrolling this Exclusive Signed Artist Poster to be able to photograph it! It’s by Paul Tonner, and shows the main cast of Deadpool 2 (which is amazing). You can see in the bottom left corner where he’s signed it with his initials. It’s really rather thick paper and came rolled in a tube, so it’s going to take some flattening out! 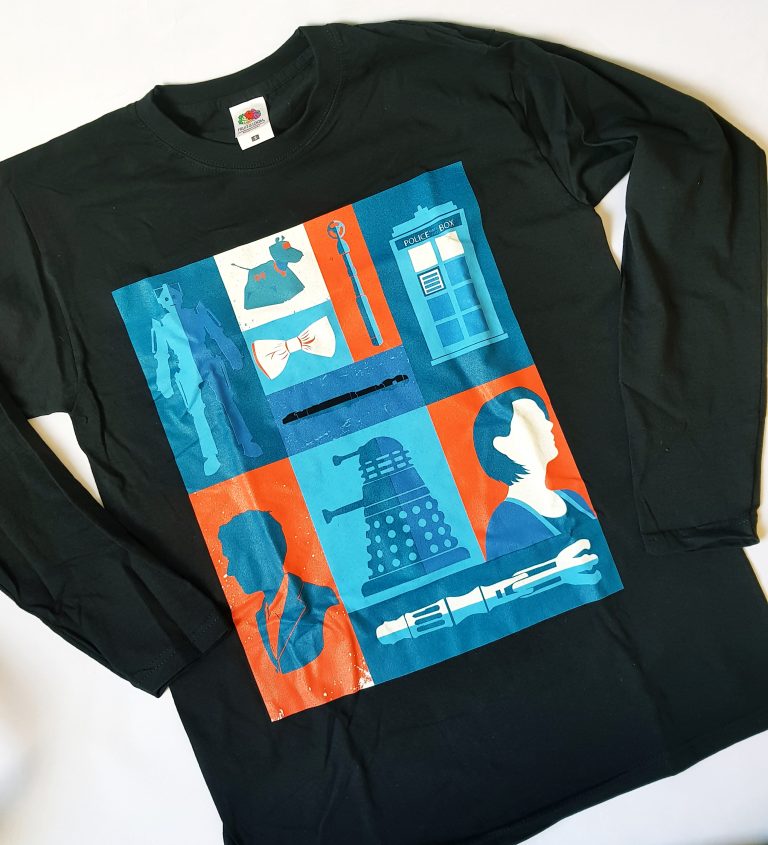 Finally, this month’s shirt is a Doctor Who Long-Sleeved T-shirt. The design is very cool, referring to the most recent Doctor. I also really like that it’s a long-sleeved shirt, which is very unusual for geek box shirts. Perfect for the cooler weather!

This month’s box has some pretty cool stuff. The notebook is the only non-exclusive item, but I think it’s the nicest, it’s such beautiful quality. If it had dotted pages rather than lines I’d be using it for my next bullet journal!

The Doctor Who print and shirt are also really nice. I think the long sleeved shirt is fantastic, they should definitely do more of these in the winter. The RRP is a little higher than for a regular t-shirt (£14.99) but I think that’s perfectly fair as it’s good quality, nice and thick, and 100% cotton!

The Deadpool print is a lot of fun. I saw the movie recently, it’s brilliant, so this is a fun thing to have.

The RRPs are pretty good this month, and I’ve actually not been able to find the notebook for less than £10.99, so the listed RRP is actually quite low. That, combined with the t-shirt is more than the price of the box by themselves.

As always, a great value selection of geeky items, something for everyone's tastes!