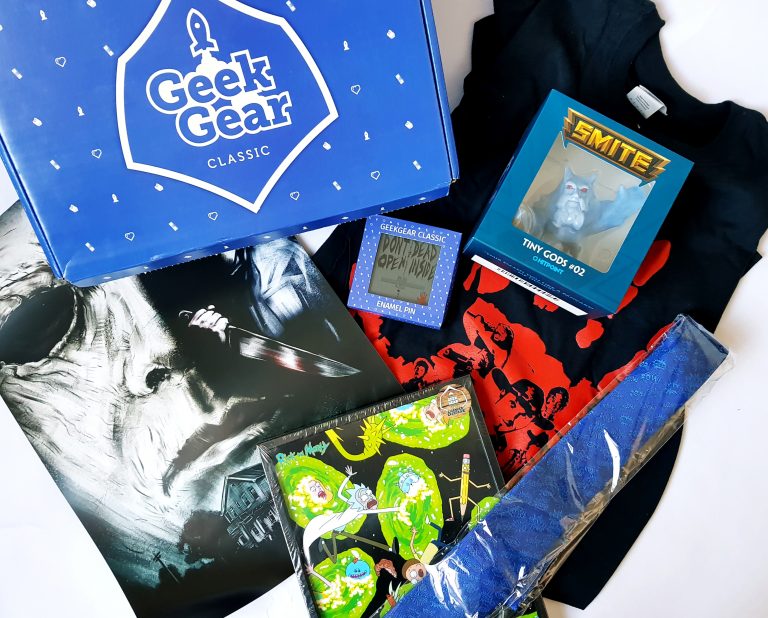 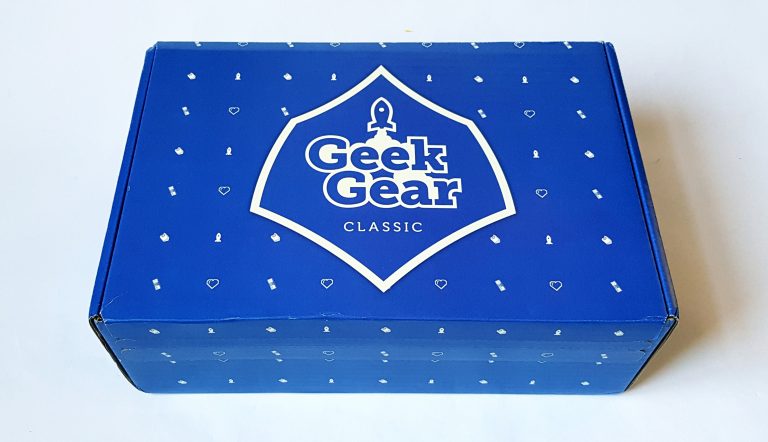 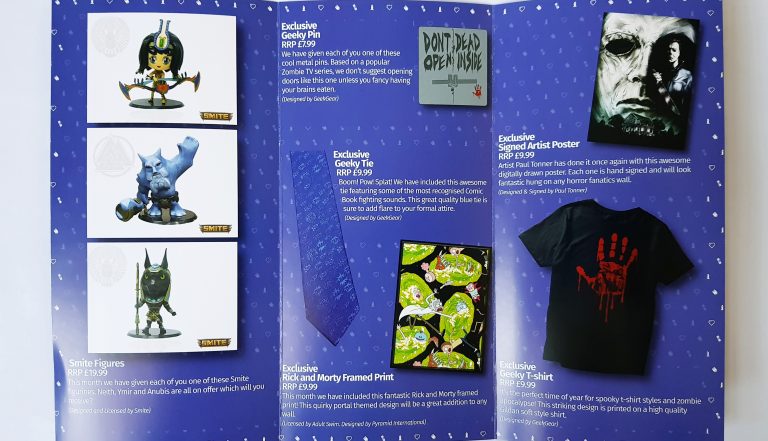 The menu gives you a list of the contents, with their RRPs. 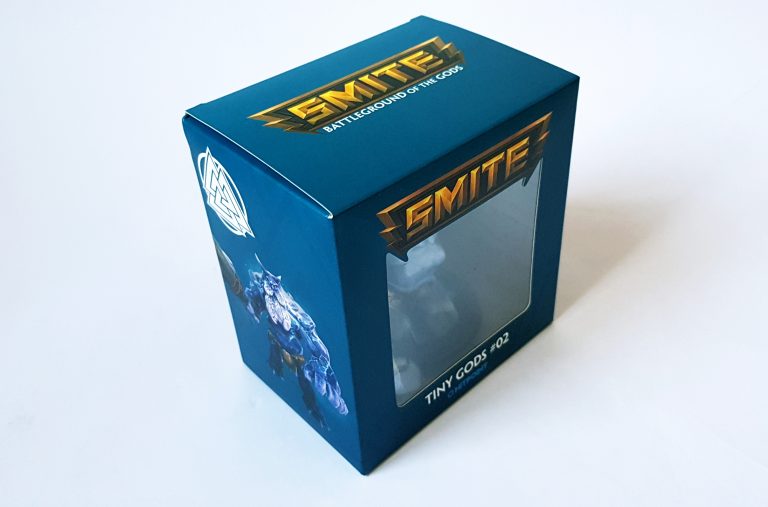 The highest-value item this month is a Smite Figure. 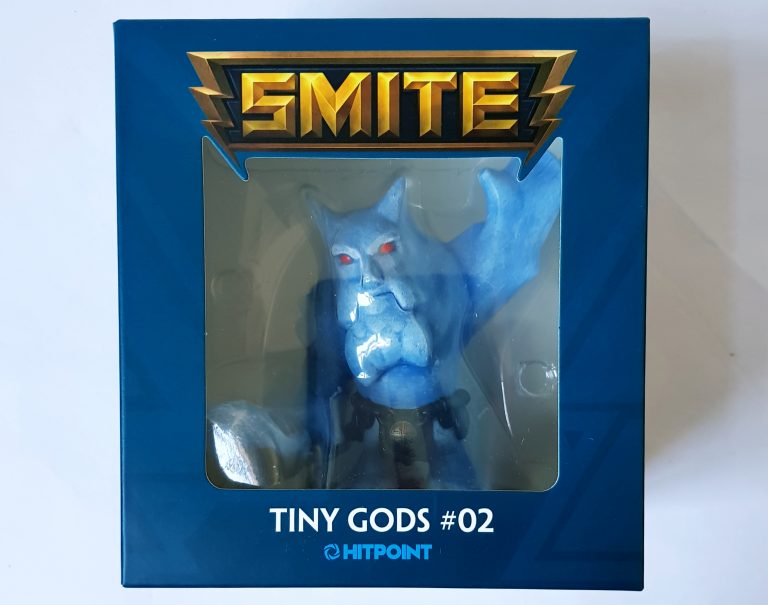 There’s one of three possible options. Here I’ve got Ymir. 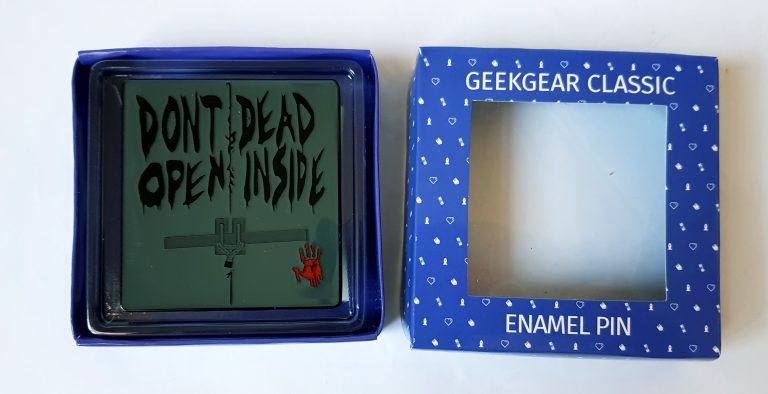 This is an Exclusive Geeky Pin. It’s a GeekGear design, but you can probably guess what it’s inspired by! 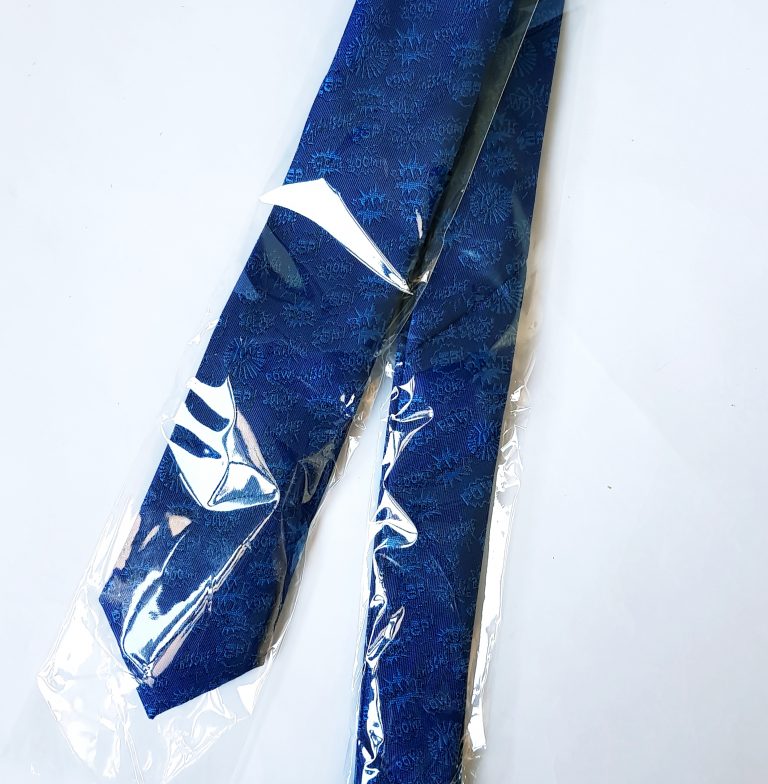 Another exclusive, a Geeky Tie. 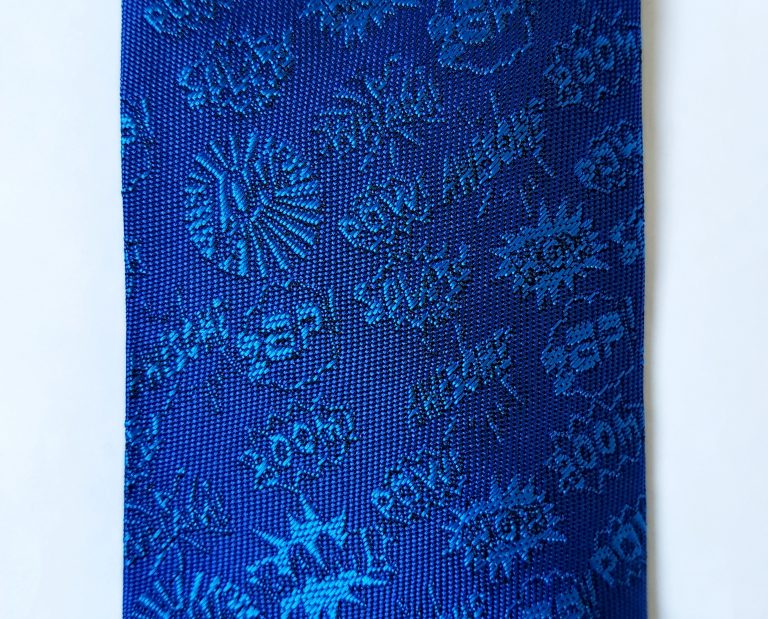 Close up, you can see the pattern of famous comic book fighting sounds. 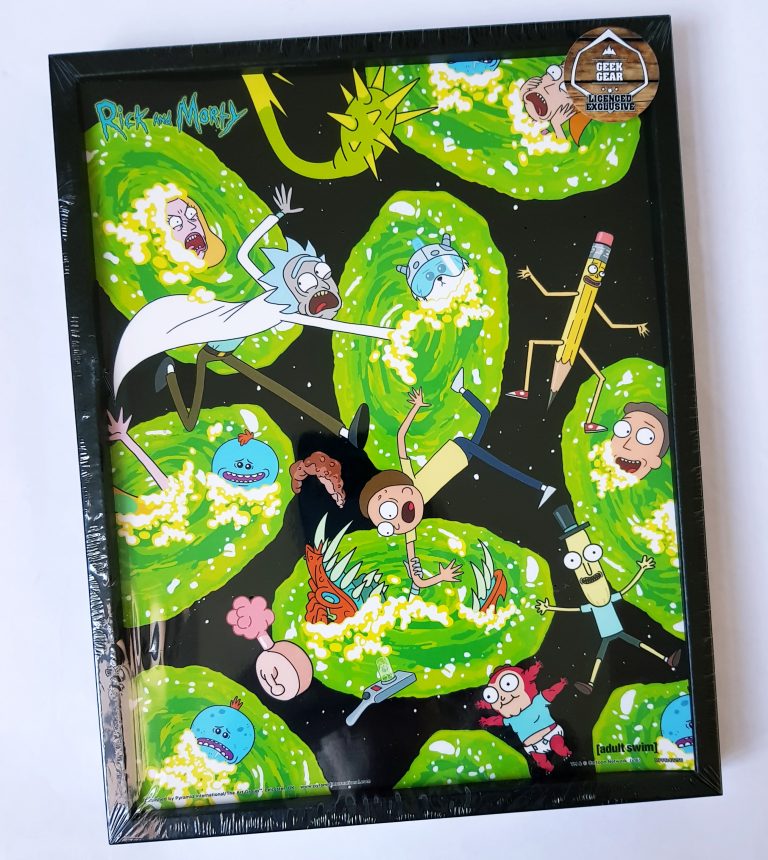 This is a fin Rick and Morty Framed Print. Lots of portals with famous characters from the show. 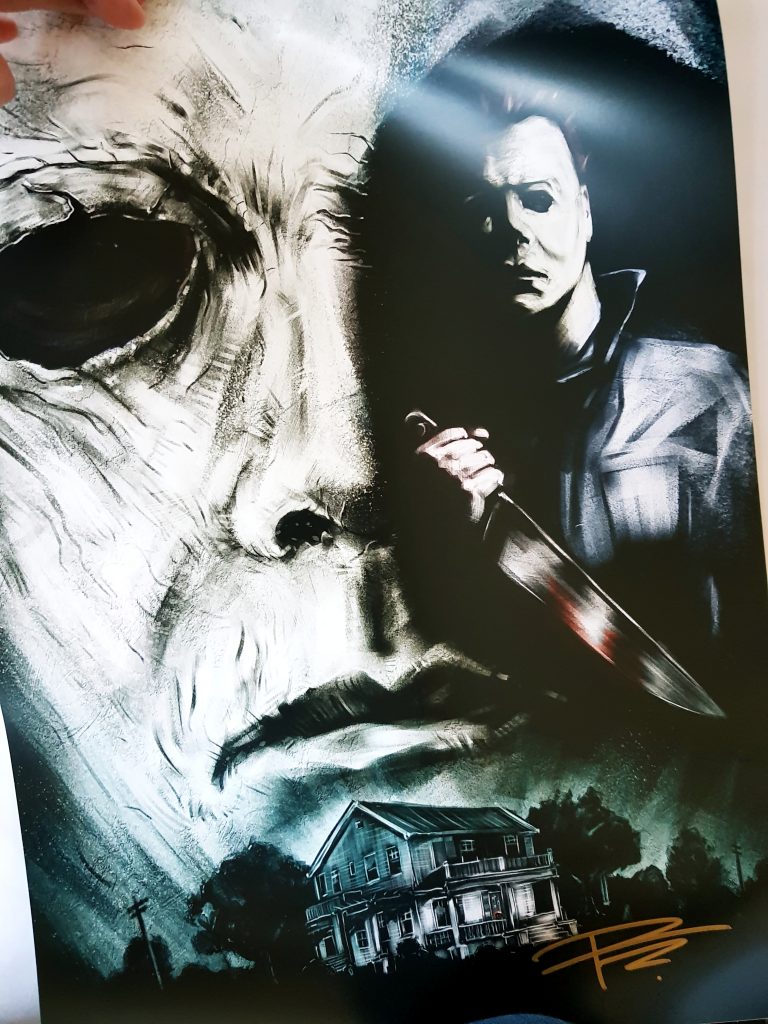 Like last month there’s another Exclusive Signed Artist Poster by Paul Tonner. You can see the signature on the bottom right. This is from another recently released movie, the new Halloween movie. 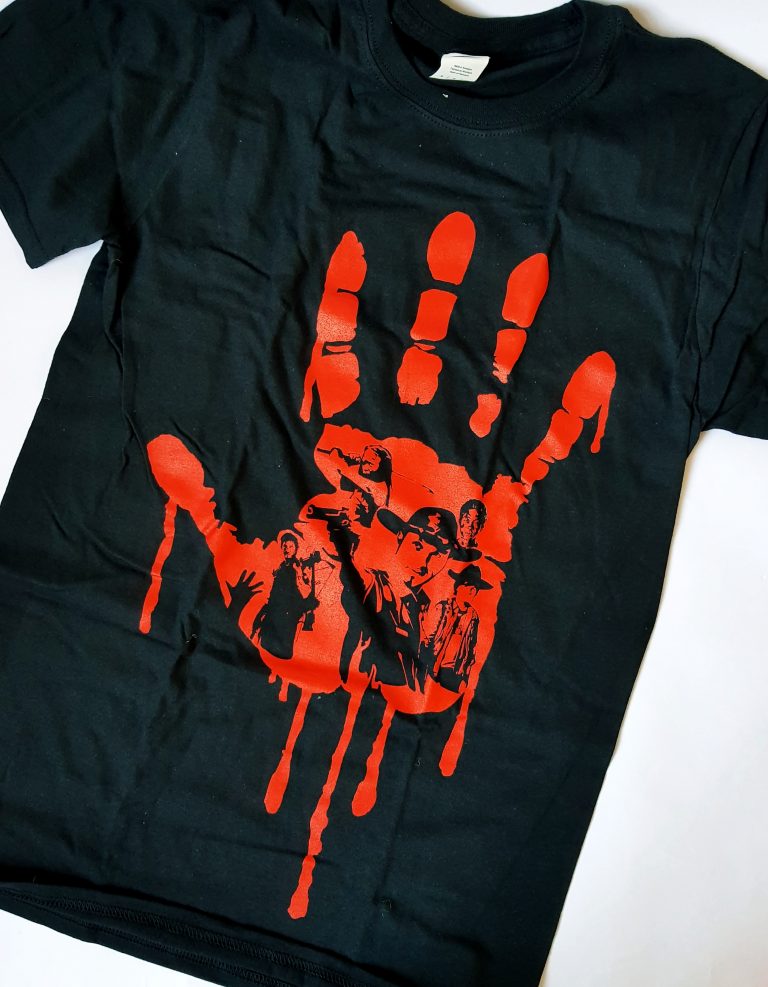 This is the October box, though it actually arrived in the first week of November. I was hoping there would be some fun horror-related stuff in here for Halloween. The poster, shirt, and pin definitely cover that description.

Oddly enough, while I think it’s a reasonable selection, I’m not as excited as usual this month.

The ‘hero’ item, the figure, is listed as retailing at £19.99, but I can’t actually find it on any UK site. On the SMITE merch site it’s listed at $14.99, though if it would to be shipped it would get closer to the listed price. But I on’t actually know anything about SMITE, so this isn’t much of a special thing for me.

There was a poster last month too, and while they’re good quality, and the signed thing is cool, I’m just not really a poster person. Great for teens and kids (though maybe not Deadpool or Michael Myers for the latter!) but I don’t think they’re that practical for a lot of adults.

On the other hand, the Rick and Morty print is fab, I’m a huge fan of the show, and it’s framed, which is much more grownup!

The tie is OK, but I’m a woman, and I don’t wear ties. I think it’s tricky to have a wearable that’s generally considered suitable for only one gender, so while I could gift it, it’s not something I could use myself.

Perhaps not as Halloween-y as I would like, but the shirt is nice, the print is great, and the pin is a lot of fun. As always the value is excellent, and I don’t mind doing a bit of gifting once in a while. After all, it’s Christmas soon!