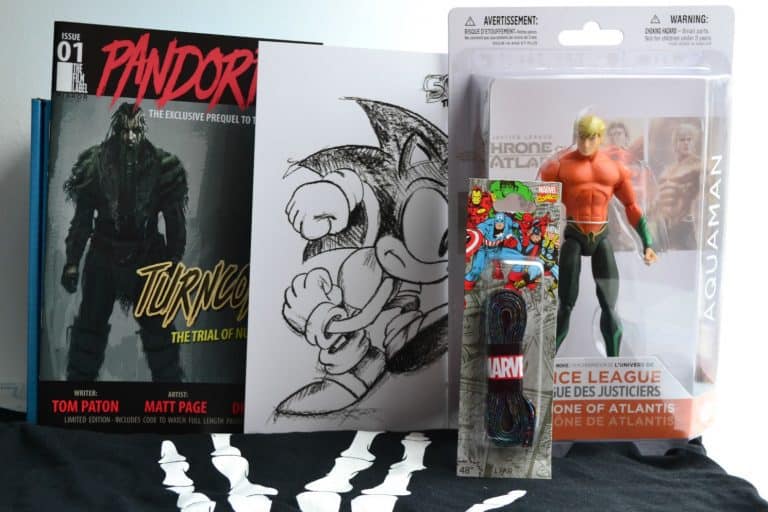 Another month, another My Geek Box to unbox and have a look at together! And October’s was an odd one. We’ve got a DC figure from the direct-to-video Justice League: Throne of Atlantis movie, some ‘exclusive’ Marvel shoelaces, an unheard of hit movie comic, a Sonic sketch and the redeemer of the box in my eyes: the shirt of the month! 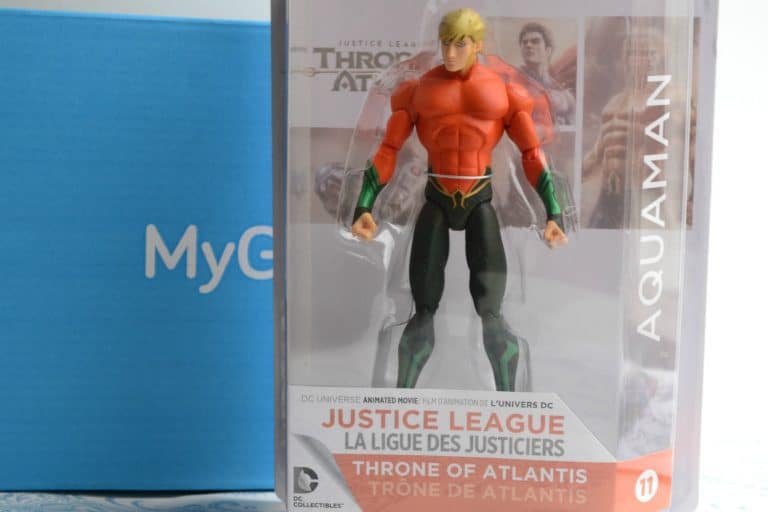 Aquaman gets a bad rap! Even the official DC Comics website has to defend him, but I don’t think his powers are that bad. Maybe never appealing enough for me to pick up a comic about him, but I’d never discount him from the Justice League of America. You always need a water Pokémon on your team, why not a water superhero? Plus, with Jason Momoa playing him in the new Justice League movie- I’m a new fan. Although, maybe not of this figures aesthetics. He looks kind of like a Ken doll. 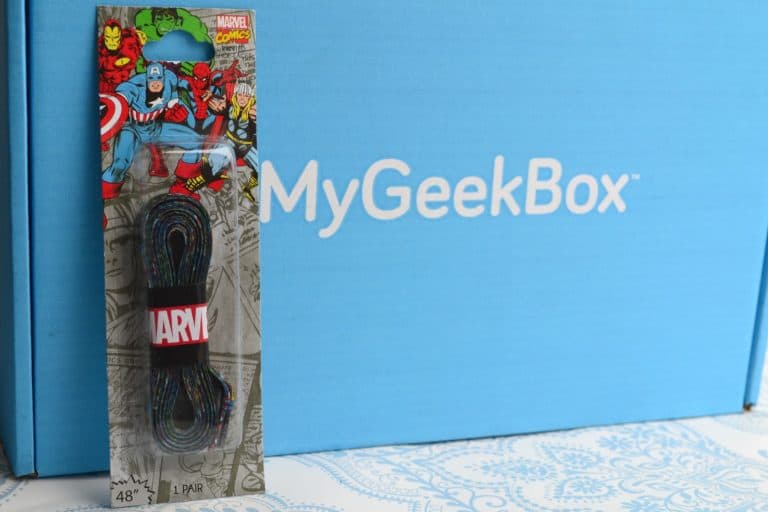 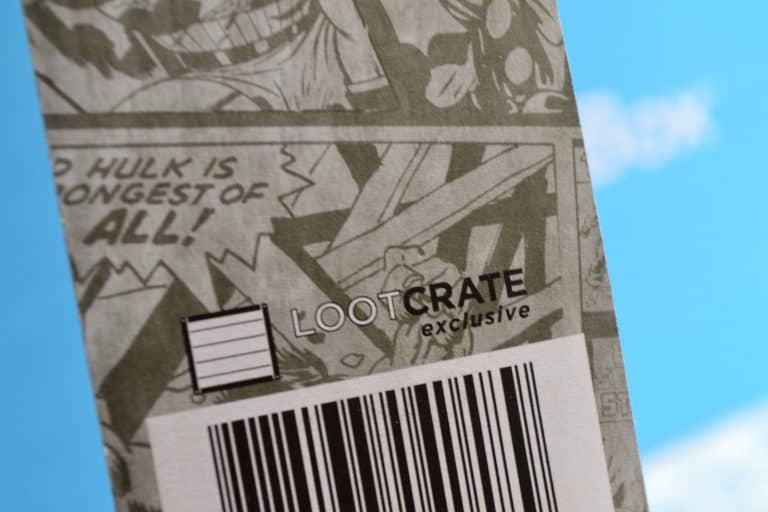 I mean- did they think people wouldn’t notice or what? When I first rifled through this My Geek Box, I picked up these shoelaces and thought neat. But those characters are barely going to be seen on such a small surface. Wait… I’ve already thought this before. Lo-and-behold, I flip the package over and there it is. ‘Loot Crate Exclusive’. Don’t get me wrong, these shoelaces are cool. And I thought so when I got them from Loot Crate. Shame on both My Geek Box and Loot Crate for this one! You can’t pull an ‘exclusive’ and it not be exclusive. 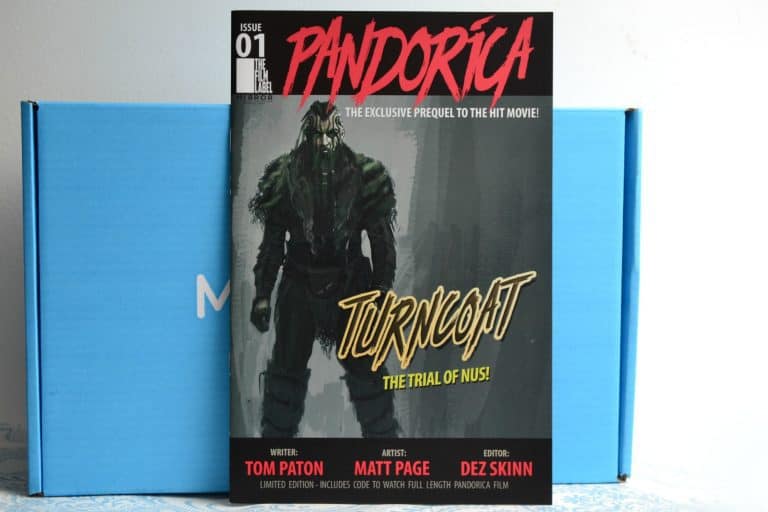 I’m not big into the movies so I wasn’t surprised when I hadn’t heard of the hit movie, Pandorica. I was surprised when a couple of my movie-buff pals hadn’t. So I did some googling and it really didn’t clear much up for me, most of the information is hidden under stuff about the Doctor Who pandorica. It doesn’t even have a Wikipedia page, just an IMBd one. Turns out it’s a low-budget movie from early in 2016 that didn’t seem to do that well. The comic looks cool though and coming with a code to watch the movie- I’ll give it a go! 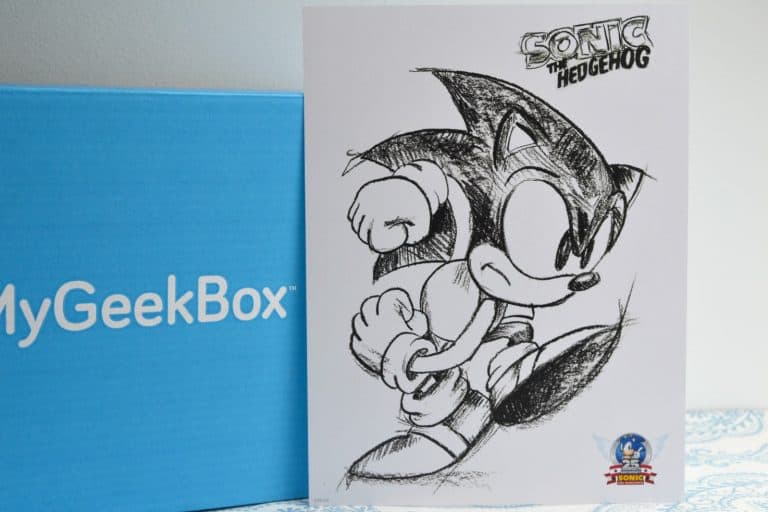 Sonic the Hedgehog celebrated his 25th year in 2016, which makes me feel old. And to mark this occasion, My Geek Box added this print to the October box. It’s a nice print, on sturdy card in high quality. And it’s strange and different to look at a chalk-looking sketch of a video game character. I like it! 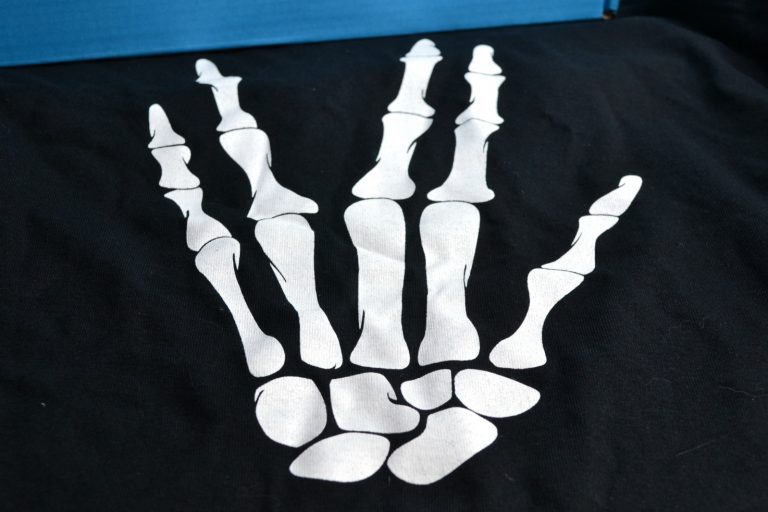 The true saviour of this box for me is definitely the My Geek Box shirt of the month! This skeletal Vulcan salute was fun to wear around halloween but I’ve been wearing it a lot since. A skeleton is kind of juxtaposing with the Live Long and Prosper idea but it’s fun, geeky and a little different. Good one, My Geek Box!

Overall, this box was a bit of a mixed one. It all depends on how you answer the questions; How much do you like Aquaman? What do you think of low-budget movies? Where do you stand on the limited edition laces?