Reviewed by Mary on 9th September 2021 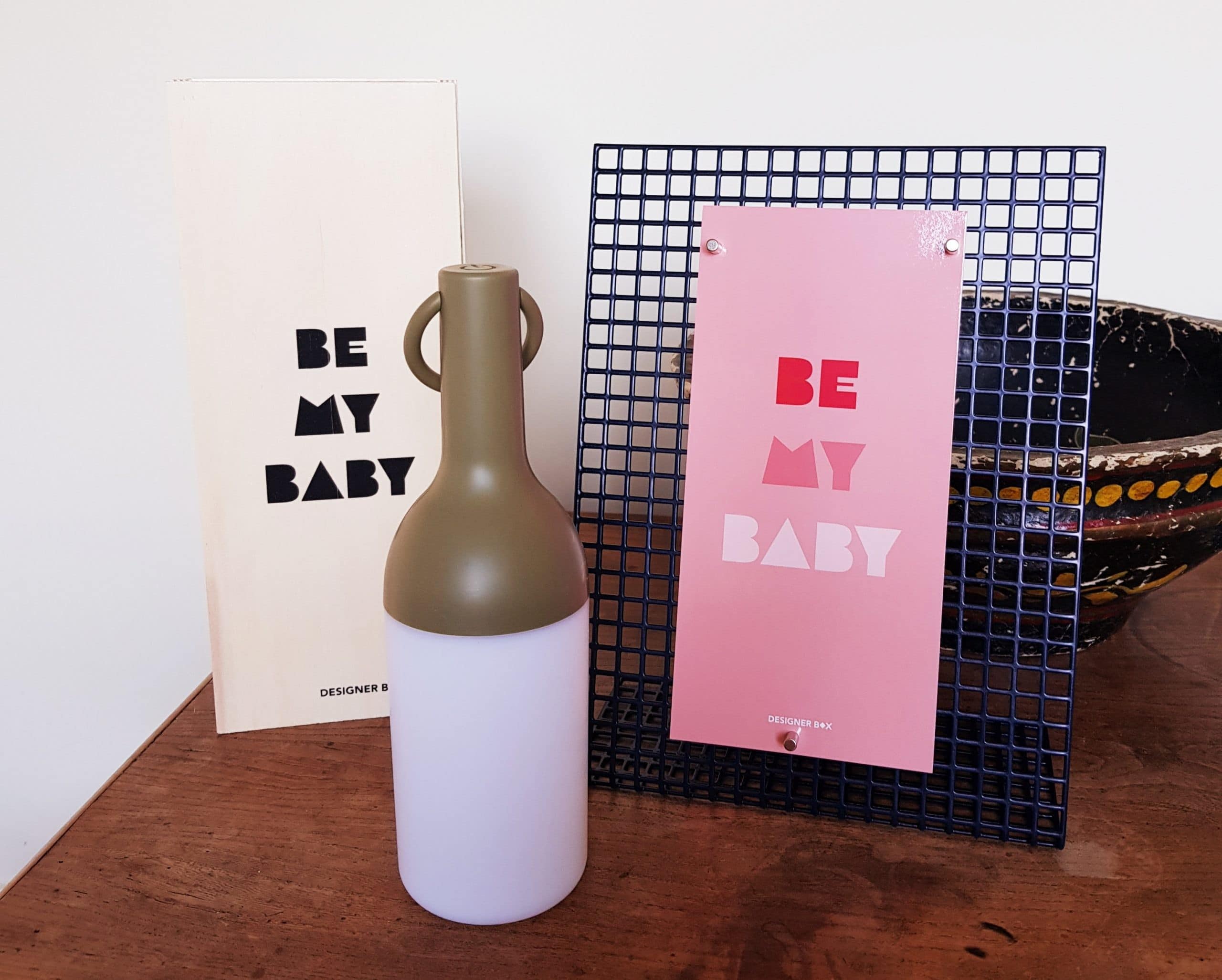 Designer Box is a company that loves aesthetic interior style and design. Every two months they send out a beautiful item for your home, all made by independent designers and craftspeople using natural and/or recyclable materials.

Subscriptions cost from €40 per month, and each item will have a value of at least €90. Each box also contains a design magazine, which includes information about the designer of that month’s item. 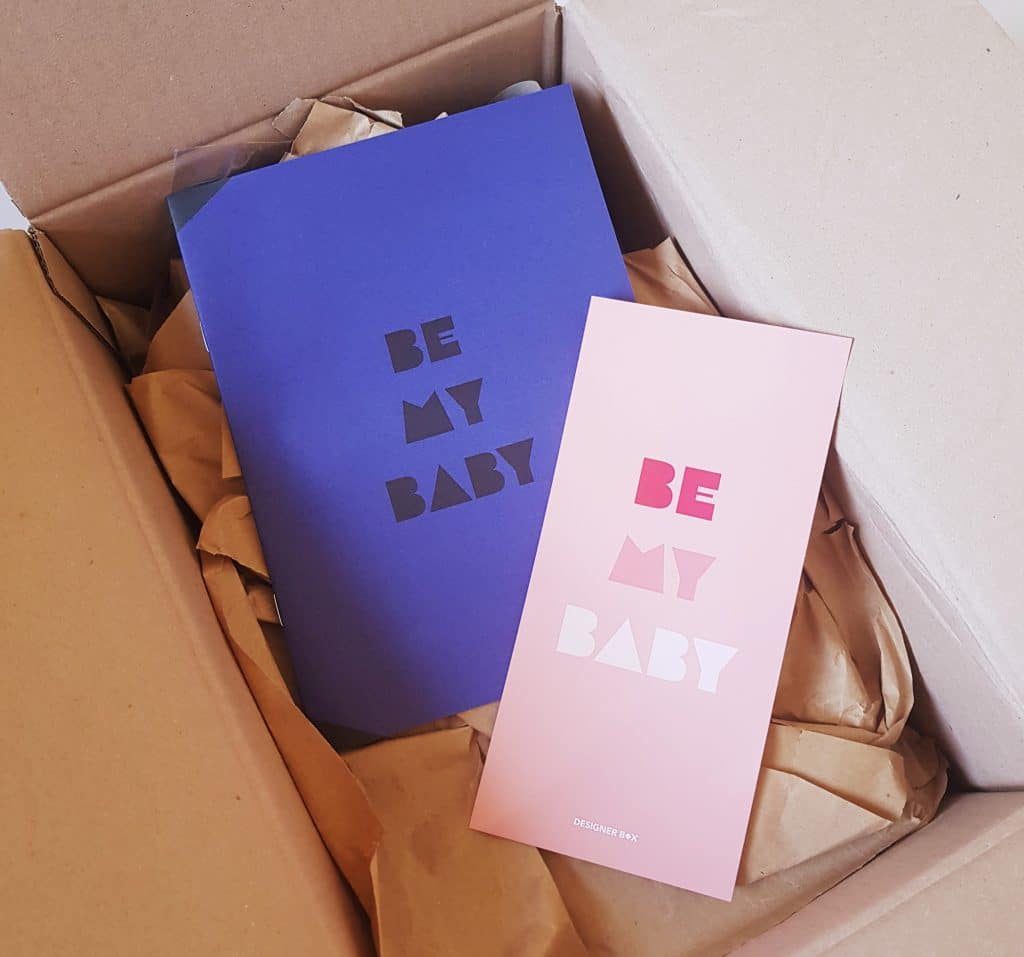 The latest box had an intriguing theme – Be My Baby. The  first thing I saw when opening was the magazine plus the pink card, and I was intrigued as to what could be inside. I do like this about Designer Box, everything has a name but doesn’t necessarily give you a clue as to the actual item itself! 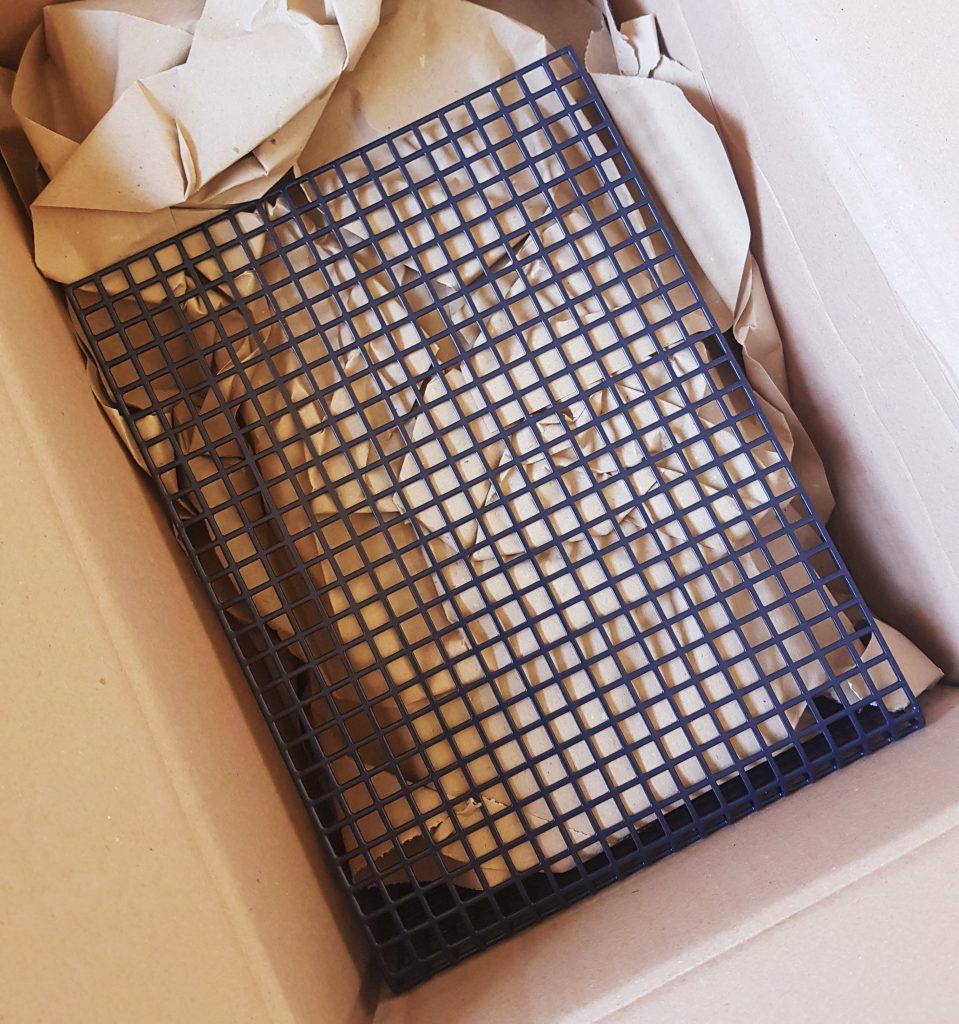 Directly underneath was a metal grid, shaped a little like a leaning lectern.

Attached to it was a little bag containg three magnets.

With a little help from the magazine, I discovered that it is a display stand. The little magnets, that you can see in the corners are actually incredibly strong. It can be stood both in landscape and portrait mode as well.

This would be a nice way to display pictures or photos, or even a fun noticeboard, perhaps in the hallway t see as you go in our out of the home. There are lots of possibilities and while it’s quite minimalist the grid gives it some visual interest without it being intrusive.

Anyway, on the to main part of the box. 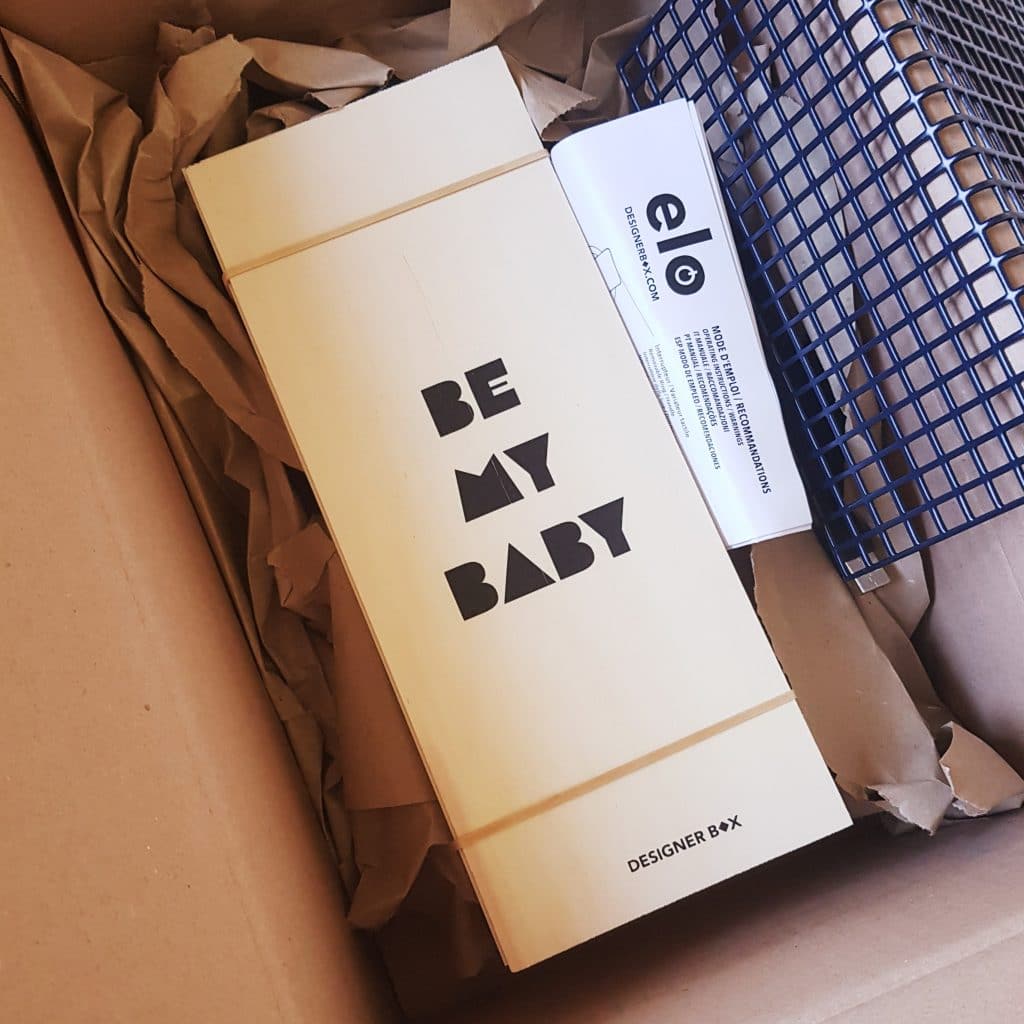 More packing paper (everything is recyclable of course!) and then this rather nice wooben box with the name of the box again.

It’s all beautifully presented and packed, and it’s a rather nice experience making your way to find out what’s actually inside. 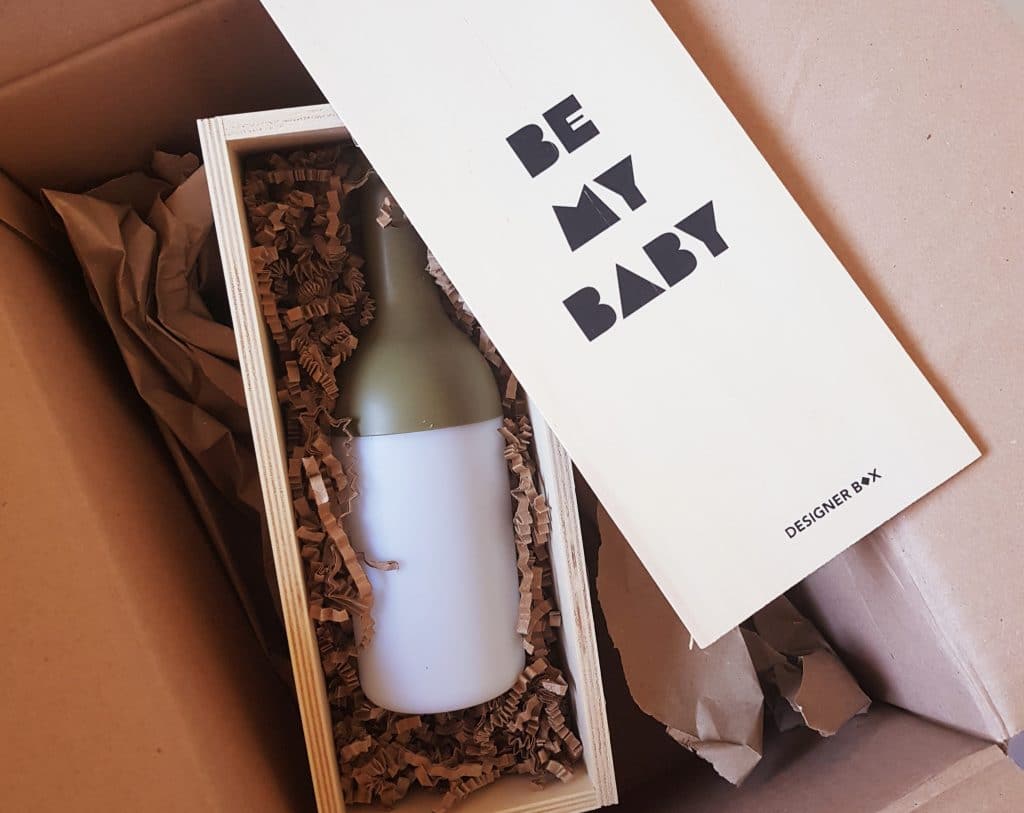 And this was inside the box!

It’s not a bottle of wine, though it’s a very similar shape. But it actually looked rather familiar. 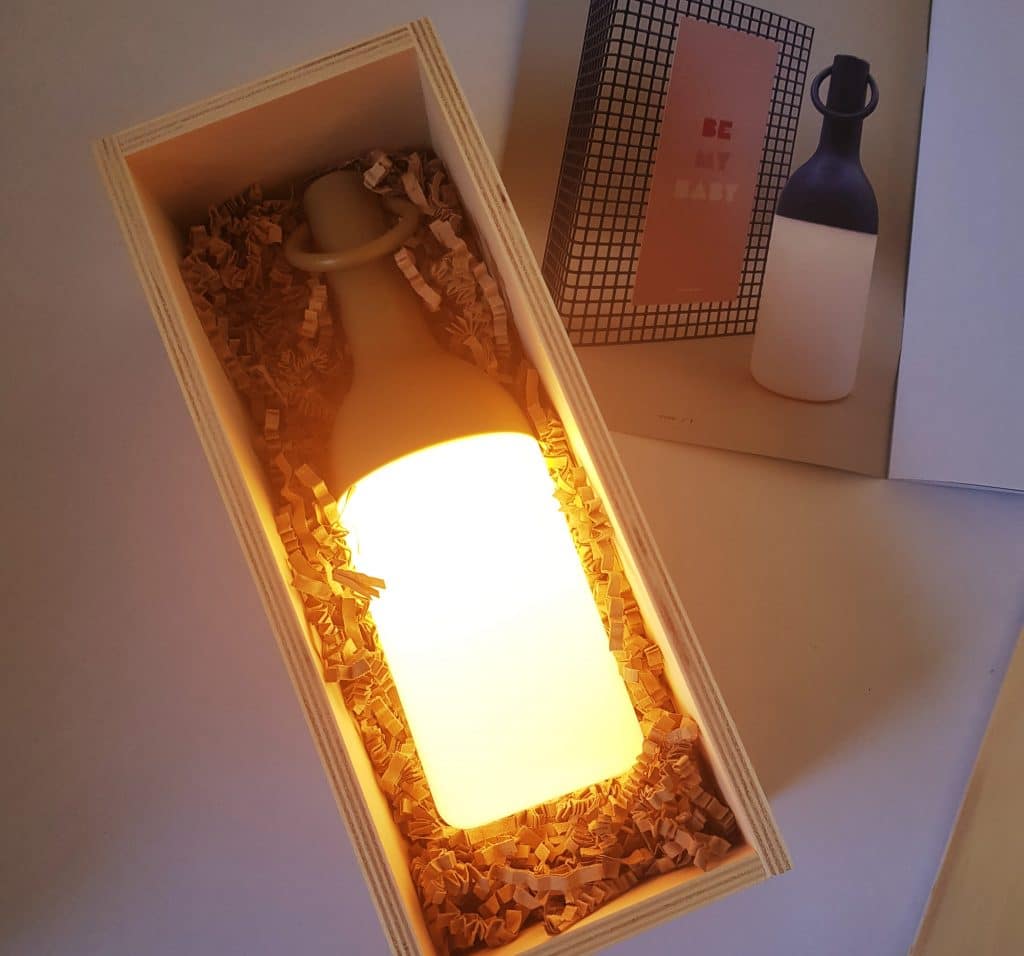 It’s a lamp! And not just any lamp, it’s a slightly smaller version of the ELO lamp from last summer’s box.

You can find my review of the larger lamp in the main Designer Box page here, but I can tell you here that I really really loved it. 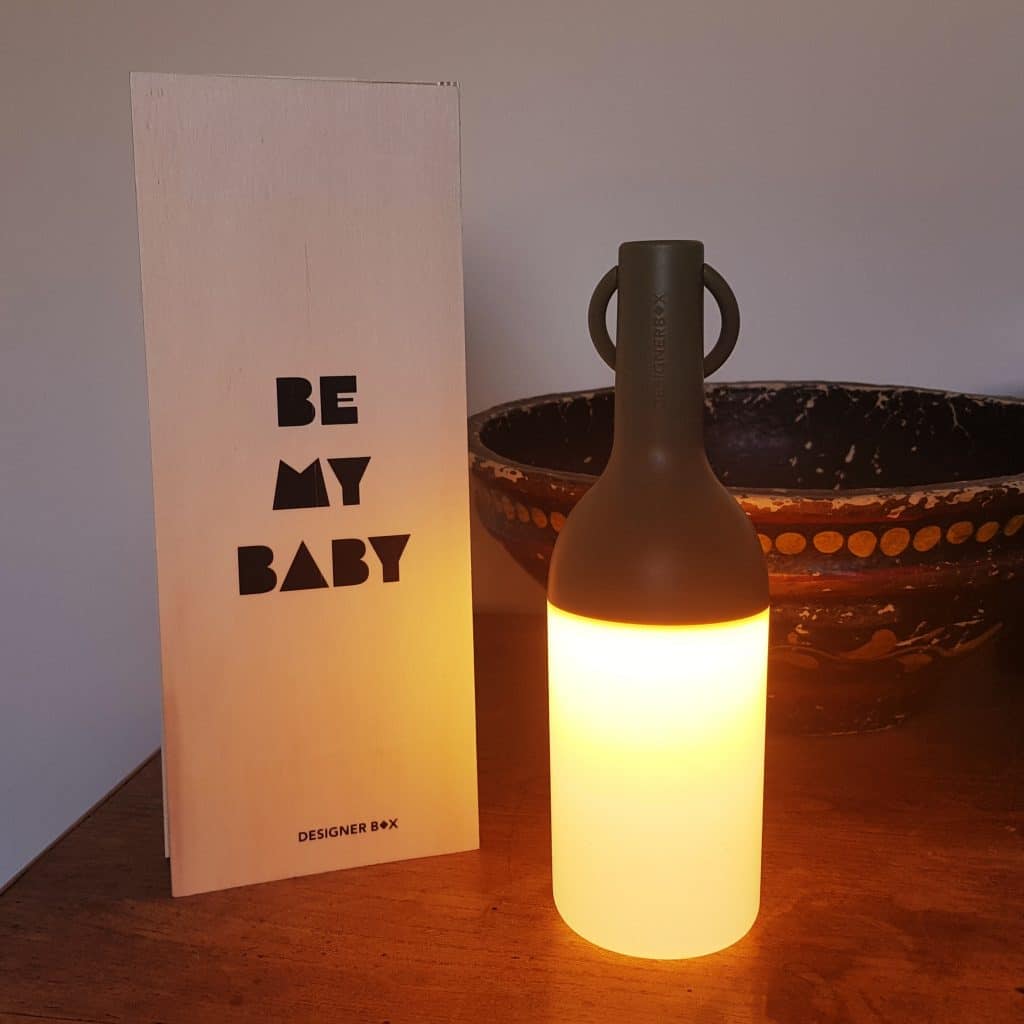 It’s a really nice minial design. The bottle shape is always a classic of course!

It turns on with a touch-sensitive patch on the top, and you can hold it to brighten or dim the light.

Rather than messing about with batteries, it charges via USB, and there’s a port on the back which is covered by a rubber plug to keep out the dust and dirt. There’s also a USB cable included in the box so you don’t need to worry about finding one that works.

It charges fast and can apparently last for up to 40 hours, depending on how bright it is set.

As for uses, like its larger counterpart it has lots of them. It’s weatherproof so you can take it outdoors (though not in a thunderstorm!), making a lovely lamp for evening picnics or simply in the garden.  The hoop on the top means you can hang it up too, and its also useful for carrying. It’s also incredibly light so completely portable.

Indoors it can sit almost anywhere, from by the bed to the desk or a side table, or even making pillow forts!

Just for comparison, here are the two lamps together. 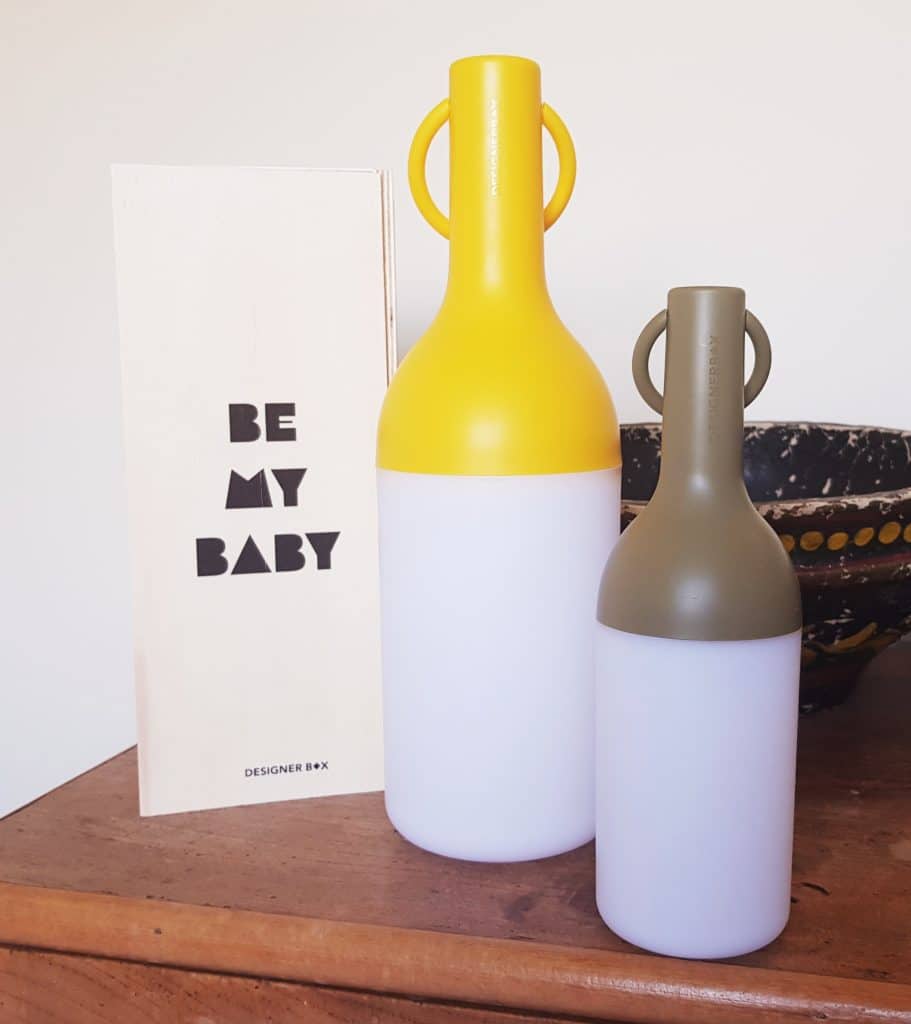 At first I was slightly disappointed that they weren’t the same colour, as I do love the bright yellow. But actually I decided the khaki contrasts really nicely and has a lovely nature-type vibe.

The smaller lamp also has a much longer battery life, and though it’s that much smaller it still casts an impressively bright light when turned all the way up. 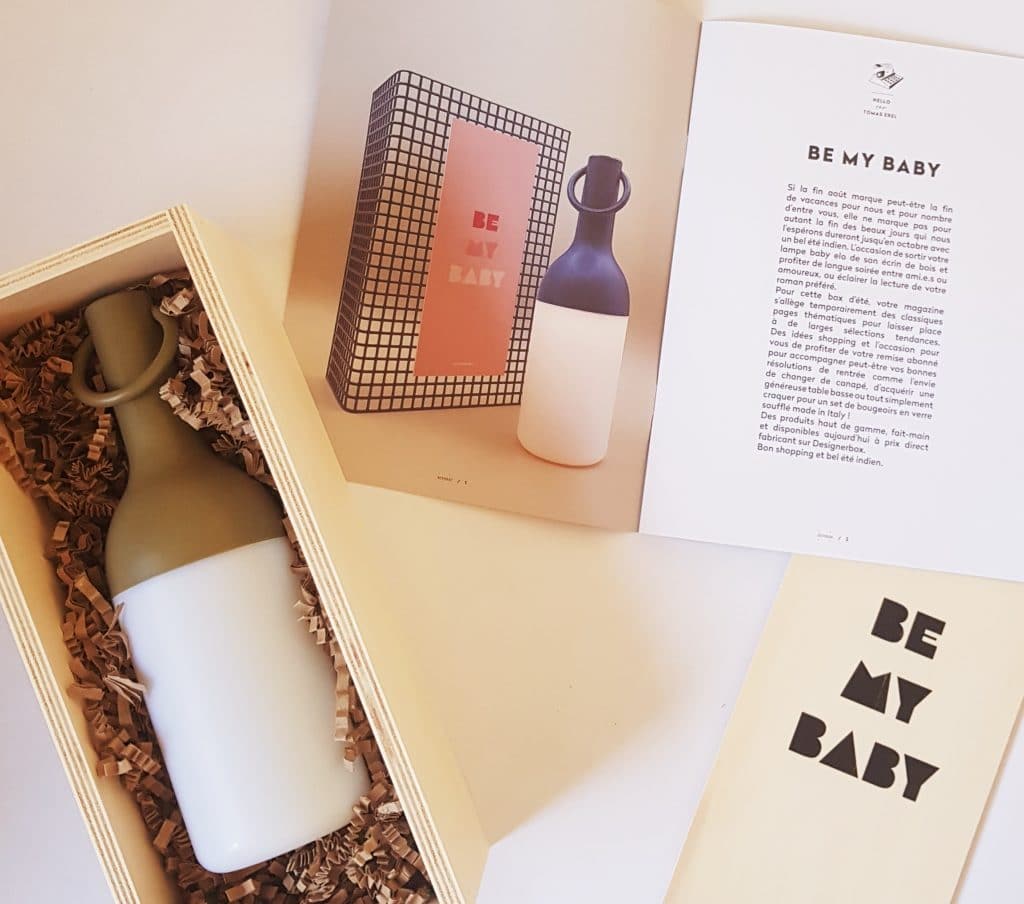 There is also a magazine included, this one showcases all the beautiful items in the Designer Box store – you can buy all the items from past boxes plus a whole lot more beautiful things from their designers. While it’s usually bilingual, this one is just in French, though the Translate app filled in the gaps in my rusty knowledge of French!

I'm absolutely thrilled with my new lamp! Plus props to the document/picture holder, which is also both stylish and useful. I often use the larger lamp at my desk, and we've also taken it out to the garden when the weather has been warm enough to sit out late. The document holder is going to join the lamp on my desk, as it will ver very useful to have papers propped up rather than lying flat. Designer Box really does have a knack of selecting designers who combine beauty and utility in an incredibly pleasing way. The items I've received from Designer Box really enhance my home, and they definitely add joy.

How would you rate Designer Box ?