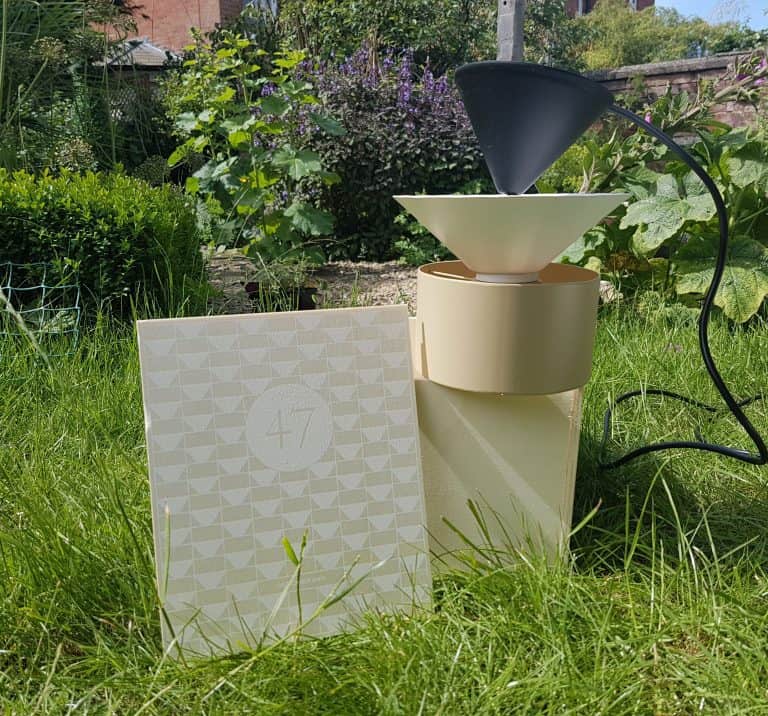 Each month members will receive a numbered wooden box containing a new object not found anywhere else, and especially designed by an international design star.
The boxes are produced in limited quantities based on the number of members, and accompanied by a certificate of authenticity.

As well as subscribing you can also buy individual items direct from their website.

This is actually a French company, though fortunately, because my French is rusty, their website and emails are also in English as well as French.

I was excited to try out this subscription. Firstly, it is very different from anything else I’ve received; and secondly, their items are both beautiful and unusual. Our home is full of all manner of eclectic stuff, and both my husband Big C and I appreciate design.

Designer Box works with designers from all over Europe to produce unique and aesthetically pleasing items for the home.

This May Designer Box had a little bit of trouble: there was some kind of accident involving the delivery of some components of this month’s item, with the unfortunate result that subscribers’ deliveries were seriously delayed. So this box, #47, was actually due nearly a month ago, but it only just arrived. 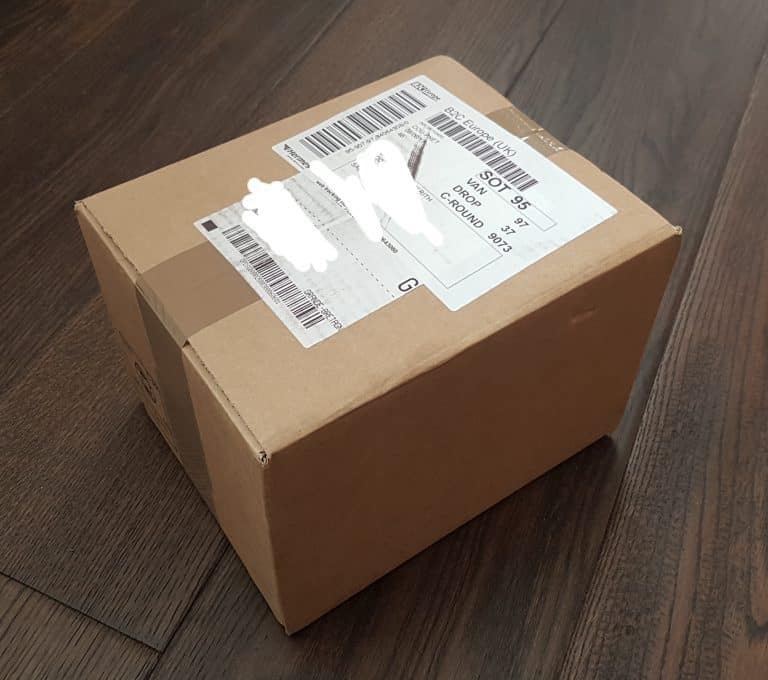 As it was a beautiful day I decided to head out to the garden to take pictures. Due to the recent rain and sun the grass has been growing like crazy, so don’t expect a manicured look! But the sunshine was beautiful so I couldn’t resist taking advantage of it. 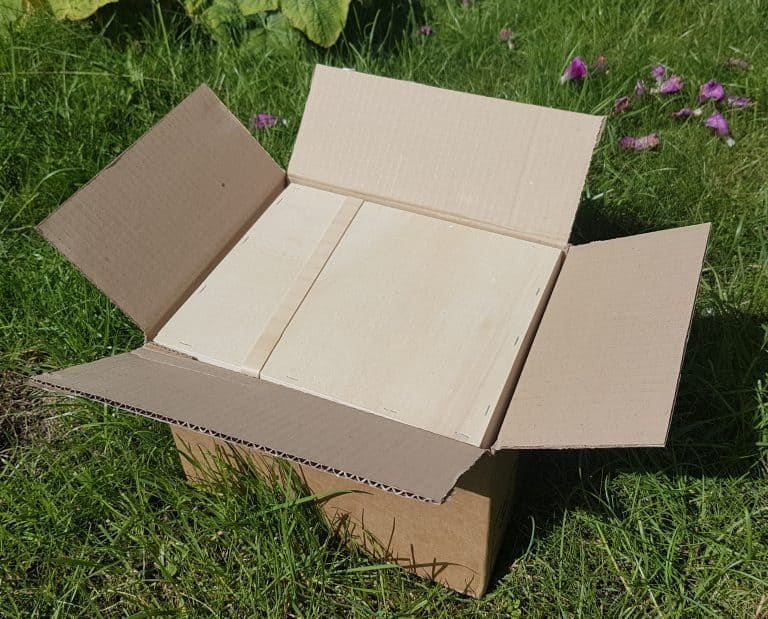 I’ve noted in a previous review that it’s irritating that the inner box is put into the mailing box upside down. As far as I’m concerned the shipping label goes on the top of the box, and that’s how it gets opened. Also, there is no branding of any kind on the box, so apart from the fact the mailing label has French on it, there’s nothing to indicate where it comes from.

I think it would be very helpful if Designer Box would attach an ‘Open Here’ label, and also put some actual branding on the mailing box! It would look a great deal nicer. Nothing fancy, just a sticker would work perfectly well. 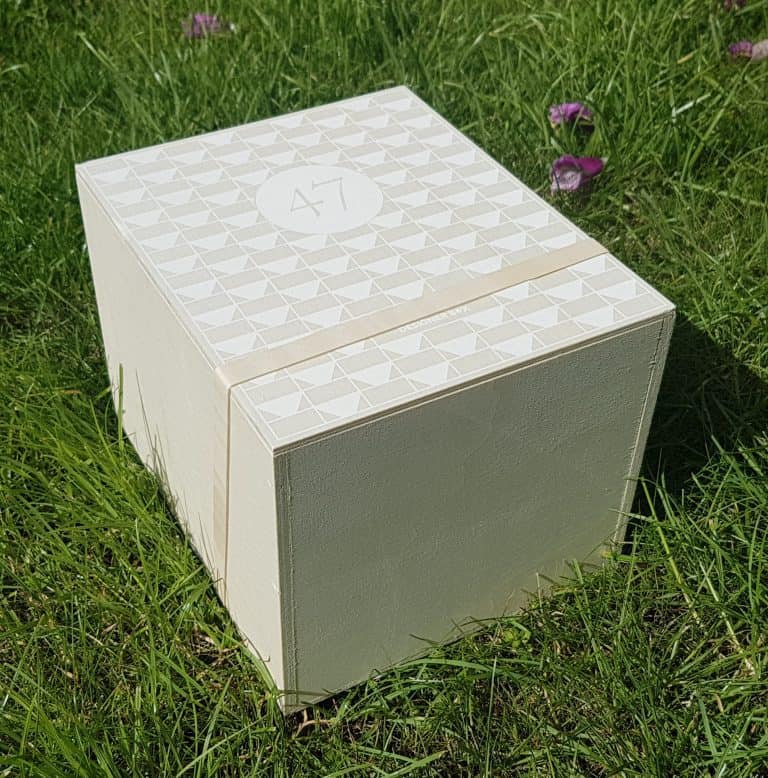 This time the box had a lovely thick rubber band wrapped around it, so even though it was upside down in the box I didn’t have to worry about anything falling out!

As always, the item itself is contained in a lovely wooden box with the month’s number on it. You could totally reuse the box for something, or even paint or decoupage it. I really like the pattern on the lid as well.

On top is their monthly magazine, Iconic News. 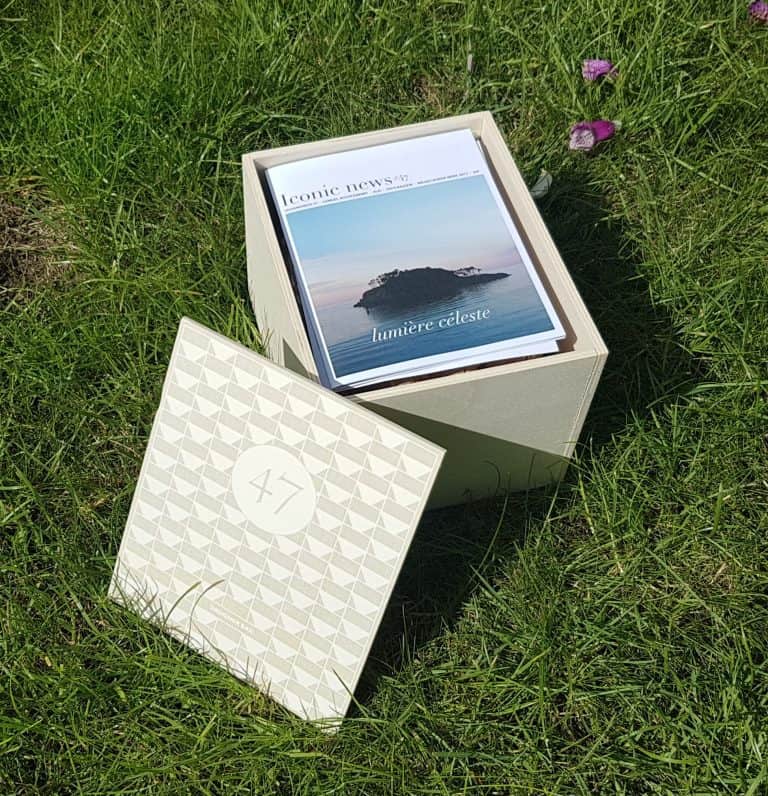 This is a dual-language magazine which contains information about this month’s designer, the enclosed item, and some other design-related content. 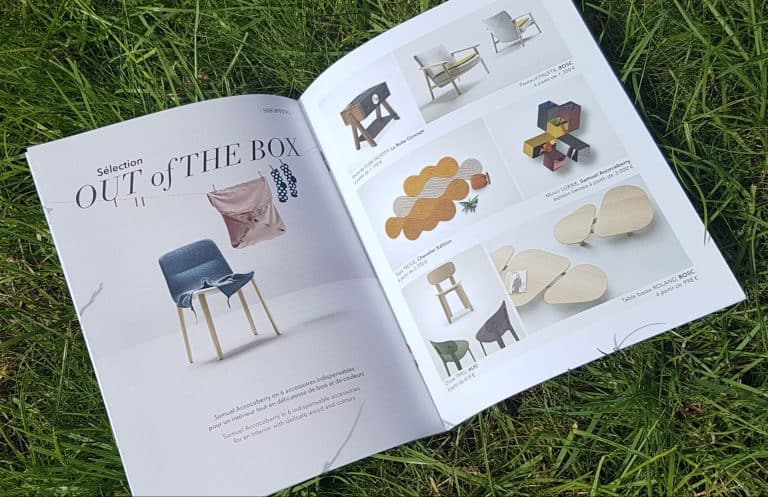 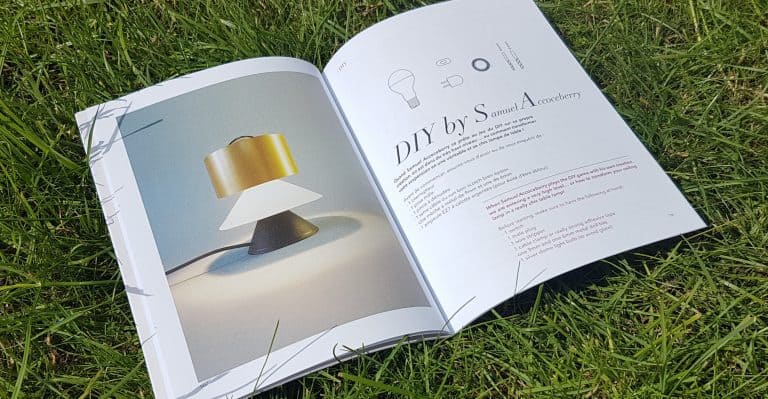 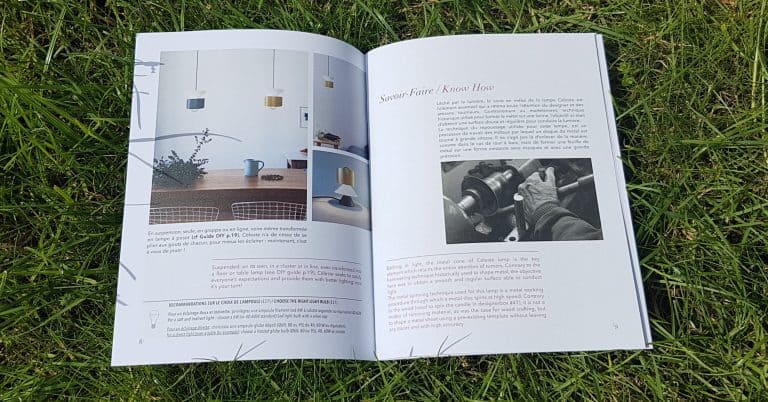 A little clue as to what the box contained!

And underneath the magazine.. 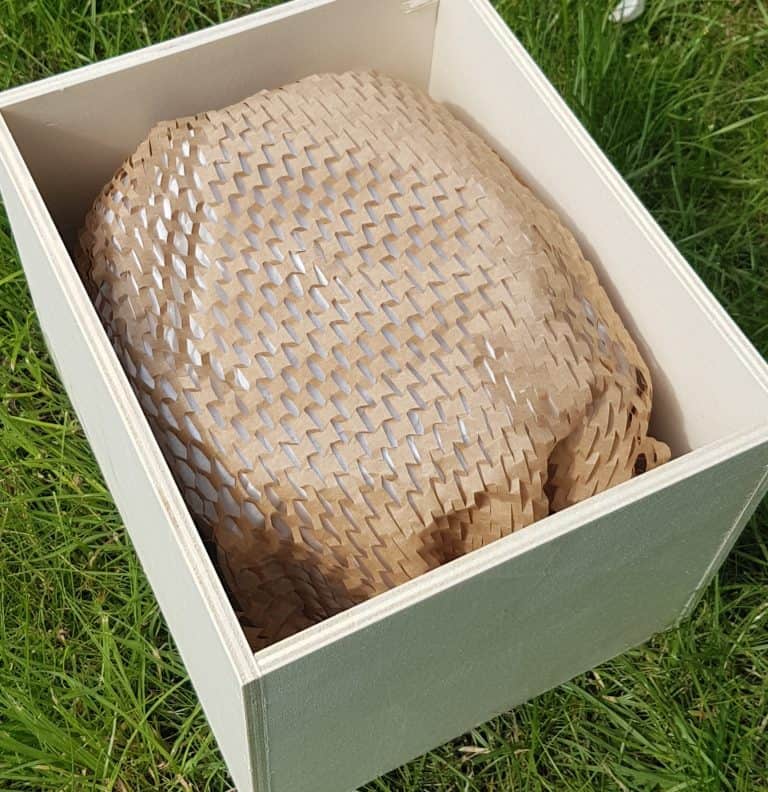 No, actually Designer Box’s excellent packaging. It’s reassuring they pack their stuff up so well, as it has to travel from France and bear the hazards of the international postage system. 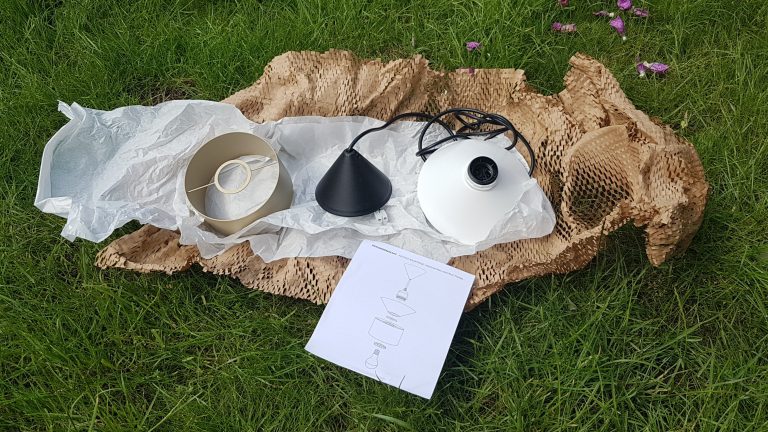 So once I’d carefully unpacked and unrolled the armadillo package, this is what I found. The two pieces required assembly, which made that instruction leaflet pretty useful!

So I got it put together and hung it up in a rose bush (of course).

(I didn’t realise at the time my daughter’s Swing Ball set is in the background. Oops.)

So, it’s a hanging ceiling lamp. The end of the cable includes attachments to be wired into a ceiling light socket.

The magazine also included instructions to convert your ceiling lamp into a table lamp. 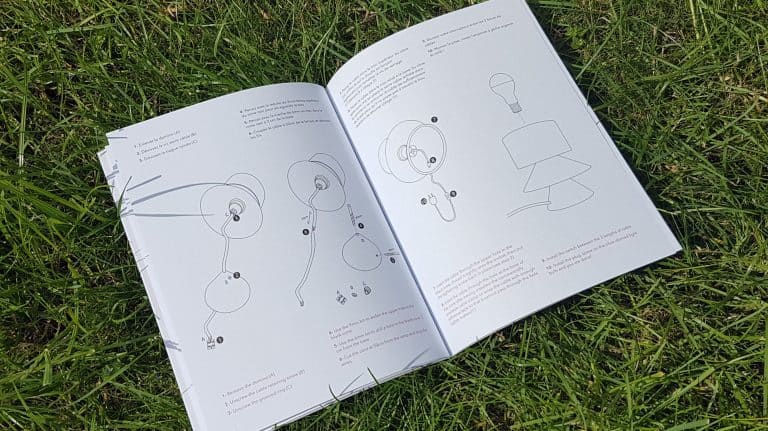 This is sensible as a hanging lamp requires an available ceiling lamp fitting, and let’s face it, it would be pretty coincidental to have an empty one in your house, unless you had just moved in and had no lamps. 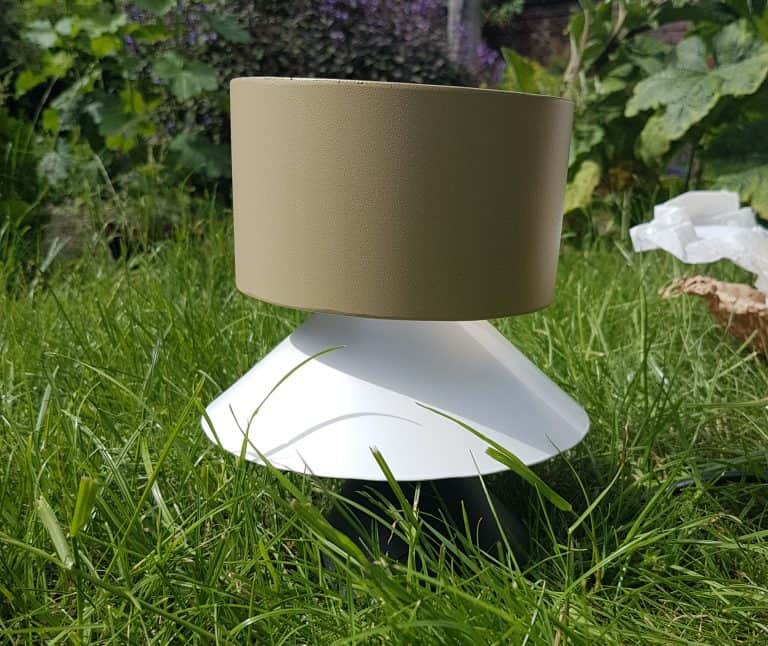 This is an approximation of what it would look like. It didn’t want to balance on the black plastic cone, and a second after this picture was taken it fell over. But you get the general idea. 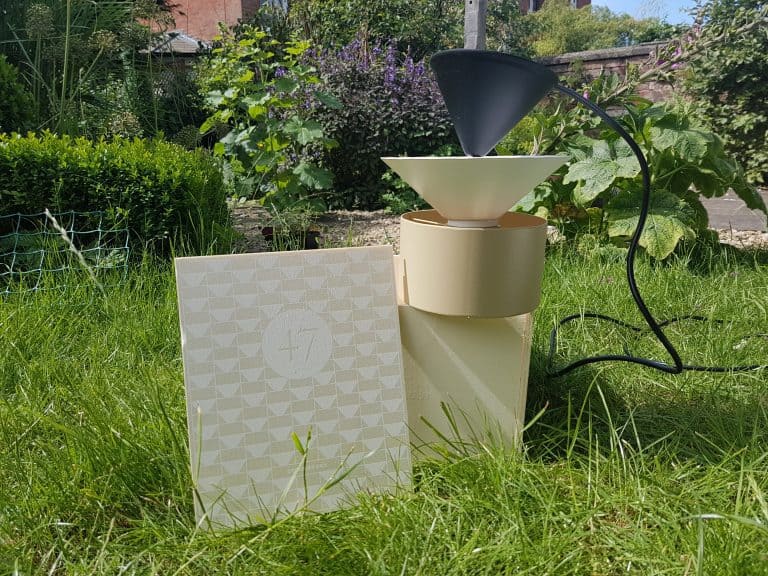 So there you have it.

Here you have my thoughts.

First, the delivery. The long delay was outside of the company’s control, and accidents do happen.

The company did send out a couple of emails explaining about the delay, which was fine, though I was a little disappointed that they did not use social media (their Facebook page hasn’t had any new posts since the end of March) to further update and reassure customers.

I really, really wish they would sort out their outer packaging. It seems like a small detail, because the packing box is perfectly sturdy and does the job. This company is all about the aesthetic, and I think this should extend to at least having a brand label on their packaging because a plain brown box is just ugly.

Also, they need to make it clear which end you open the box.

On to the actual contents.

The inner wooden box is lovely. I noticed the pattern on the lid echoes the shape of the lamp.

Their magazine is great. It’s very interesting to read about the designer, Samuel Accocebery, what inspires him, and about the process of designing the item.

The DIY addition to convert your ceiling lamp into a table lamp is useful, and brings me neatly to my next point.

A ceiling lamp is something which, while it is an accessory, requires a specific place in the home to be available. I think it’s very unlikely many people would have a spare light fitting.

I suspect hanging ceiling lights are becoming less and less common as LED spots become more standard, as they certainly are in new build homes.

Judging by the pictures in the magazine you’d need a really high ceiling. You’d also want more than one lamp, because even though our 10′ ceilings are high enough this little lamp would look silly hanging there.

We have ceiling spots, so no ceiling lights for us.

As for the DIY option, OK, it’s great in theory you can do that, but quite frankly I really don’t care to fart about with something incredibly fiddly involving two different drillbits, wire stripper, plus shopping for a switch, plug, and cable clamp.

I’ve looked back at all previous Designer Box items, and none of them appear to have any hassle factor, let alone requiring power tools or an electrician to use.

As to the lamp itself, I simply don’t like it. According to the magazine it’s been inspired by Chinese sky lanterns. If you don’t know what that is, look here.

The pictures in the magazine make the straight shade part look like it has a golden sheen. It doesn’t. It’s beige. The conical part is whiteish. The black cone would form the base in its table lamp iteration, and hide the cable fitting when hanging.

The black cone is plastic, and the other two parts are painted metal. Unfortunately all the parts, not just the plastic cone, look and feel thin and cheap. They all look like plastic.

I realise the colour scheme is supposed to be neutral. And maybe with a lightbulb (not included, something else to buy) it might glow pleasingly. But the plasticky white and beige reminded me of computers from the 90s.

Of course, things never look the same in professional commercial photographs: they use fancy lighting, filters, and reflections. But this looks completely different in real life, you can see the finish in parts is poor, and again, it is not gold.

Looking back at previous boxes I don’t necessarily like every single thing, as design is subjective, but they all could be used more or less right out of the box. Sadly, I think Designer Box has miscalculated this one.

How would you rate Designer Box ?